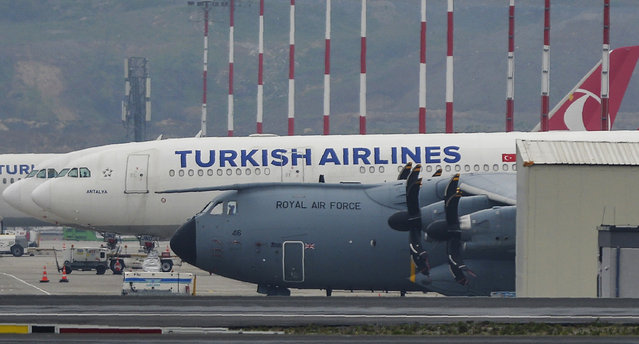 A British air force plane is pictured at Istanbul Airport in Istanbul, Tuesday, April 21, 2020. According to reports the plane arrived to transport medical equipment back to Britain. British officials have been scrambling to source much needed personal protective equipment (PPE) for medical staff and said a consignment of 84 tons, including 400,000 gowns, would arrive from Turkey. (Photo by Ibrahim Mase/DHA via AP Photo) 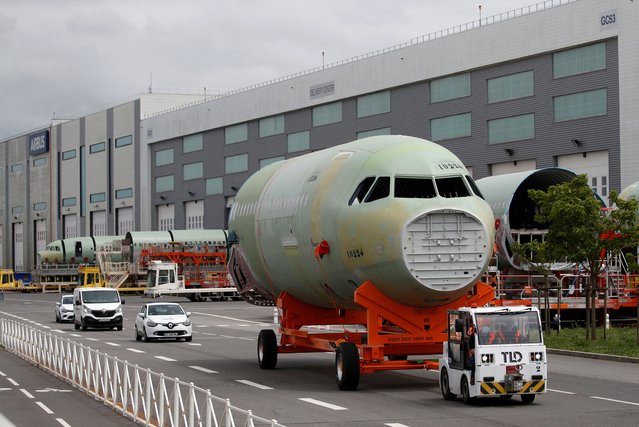 A fuselage section of an Airbus A320-family aircraft is transported at the Airbus facility in Montoir-de-Bretagne near Saint-Nazaire, France, July 1, 2020. (Photo by Stephane Mahe/Reuters) 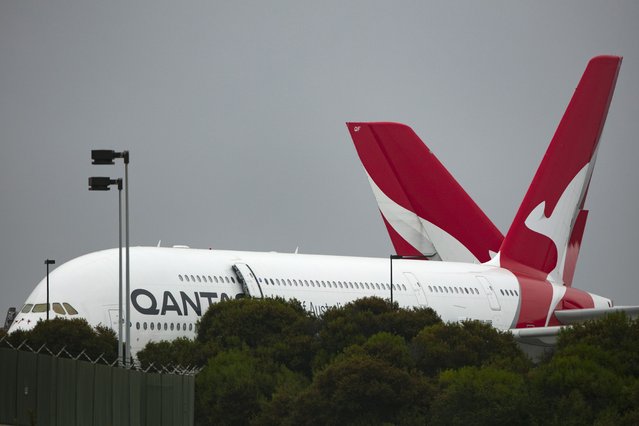 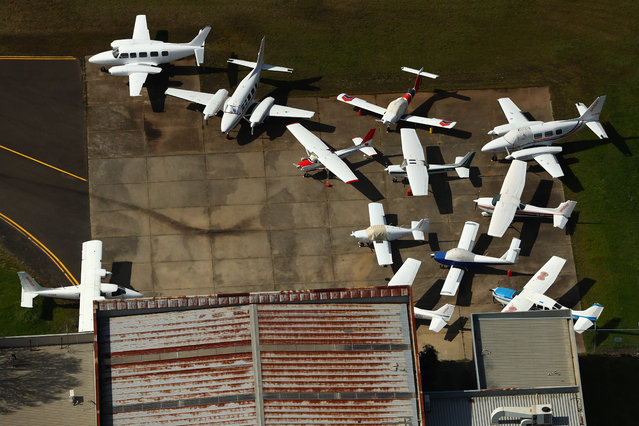 Aircraft are seen parked up at Essendon Airport on August 26, 2020 in Melbourne, Australia. Melbourne is in stage four lockdown for six weeks until September 13 after sustained days of high new COVID-19 cases. (Photo by Robert Cianflone/Getty Images) 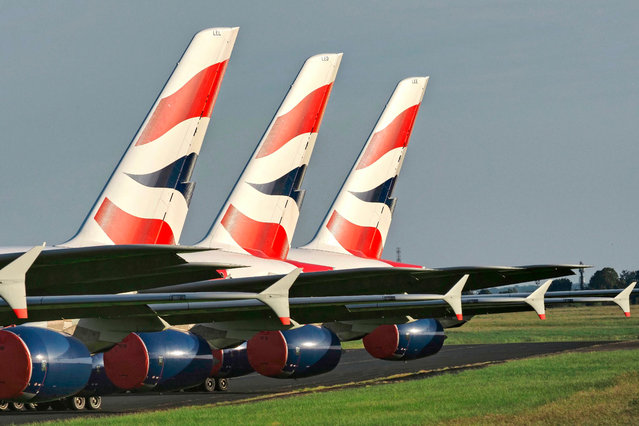 Aircraft G-CIVY, one of the last two British Airways Boeing 747-400 aircraft takes off for its last flight departure from London's Heathrow Airport, Thursday, October 8, 2020. The retirement of the fleet was brought forward as a result of the impact the Covid-19 pandemic had on the airline and the aviation sector. (Photo by Steve Parsons/PA Wire via AP Photo) 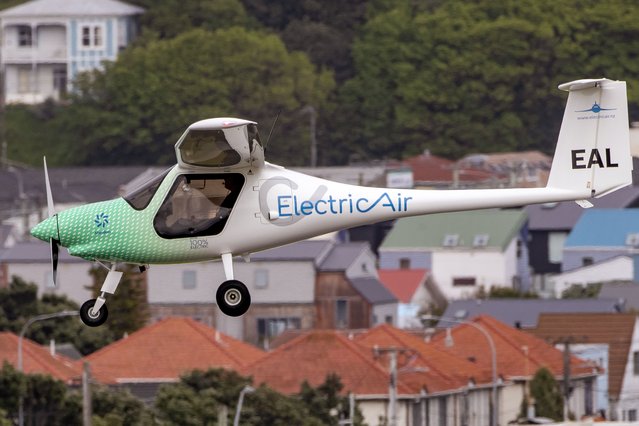 The ElectricAir plane is on approach before landing at Wellington Airport in Wellington, New Zealand, Monday, November 1, 2021. Seeking to highlight the potential for green aviation as a pivotal climate change conference opened in Glasgow, New Zealand pilot Gary Freedman made the first-ever flight over Cook Strait in an electric plane. (Photo by Mark Mitchell/New Zealand Herald via AP Photo) 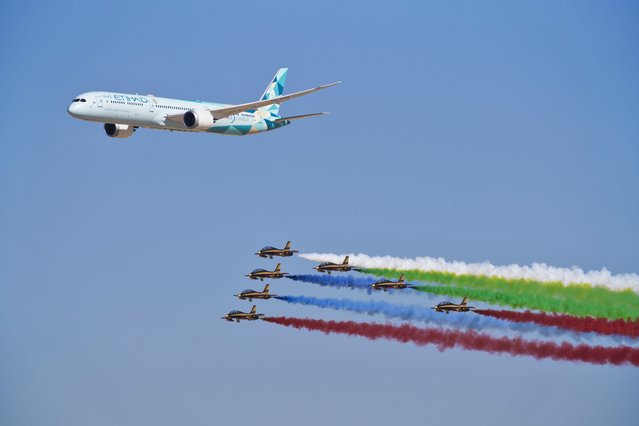 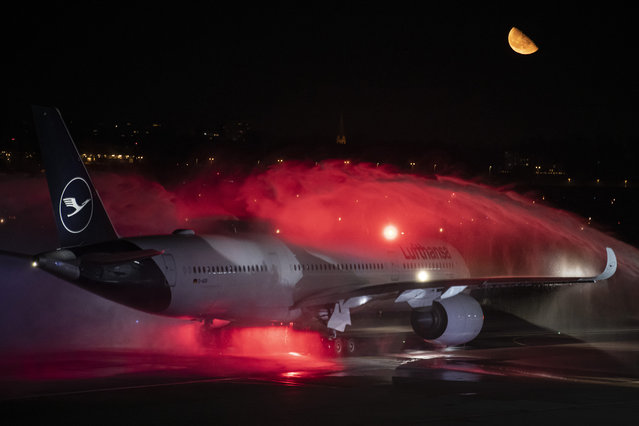 The last Lufthansa flight of the Airbus A350 aircraft from Tegel Airport is taxiing to the take-off field as it is bid farewell by the airport fire brigade with a fountain of water in Berlin, Germany, Saturday, November 7, 2020. The final flight is scheduled for Sunday. (Photo by Fabian Sommer/dpa via AP Photo) 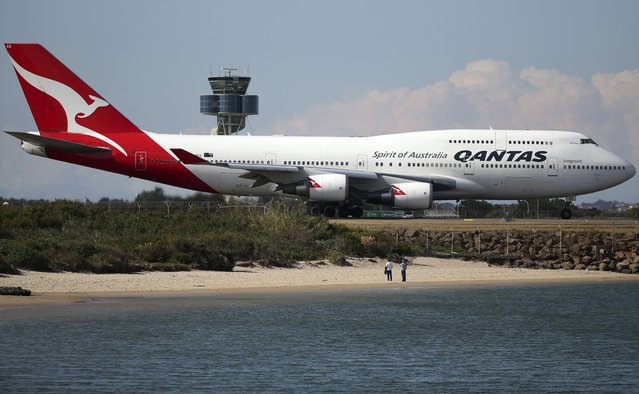 In the August 20, 2015, file photo people people watch from a beach as a Qantas plane taxies on the runway at Sydney Airport in Sydney, Australia. International tourists won't be welcomed back to Australia until next year, with the return of skilled migrants and students given higher priority, the prime minister said on Tuesday, Oct. 5, 2021. (Photo by Rick Rycroft/AP Photo/File) 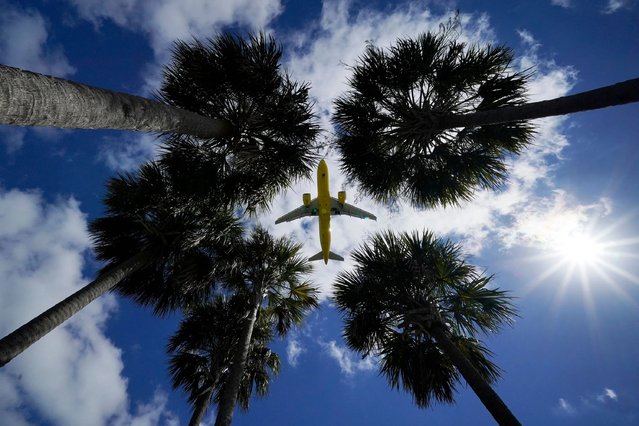 In this Friday, March 19, 2021 file photo, an airliner lands at Tampa International Airport in Tampa, Fla. On Sunday, March 21, more than 1.5 million people streamed through U.S. airport security checkpoints, the largest number since the pandemic tightened its grip on the United States more than a year ago. However, passenger traffic remains far below 2019 levels. (Photo by Gene J. Puskar/AP Photo) 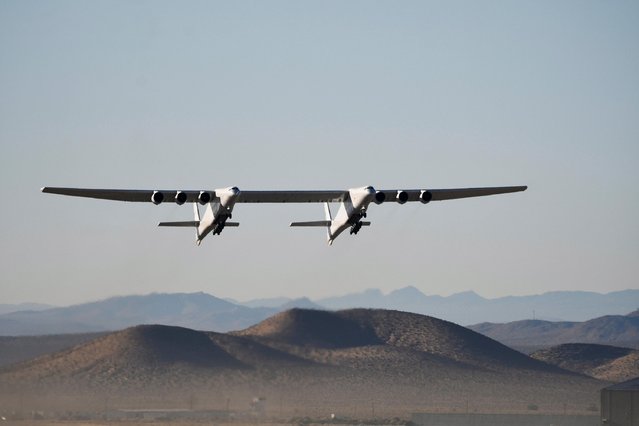 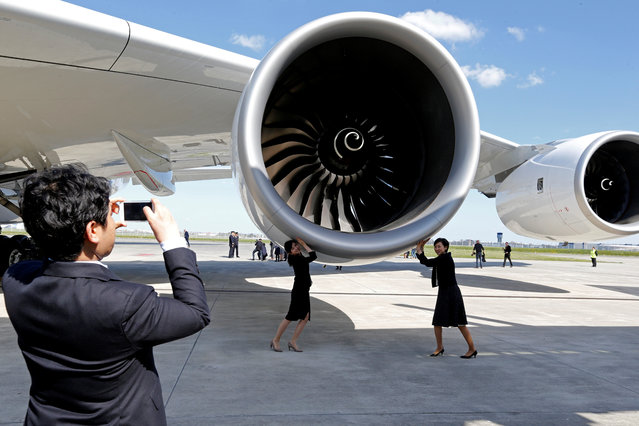 A man takes a picture of the first A380 for All Nippon Airways (ANA) during its delivery ceremony at the Airbus delivery center in Colomiers near Toulouse, France, March 20, 2019. (Photo by Regis Duvignau/Reuters) 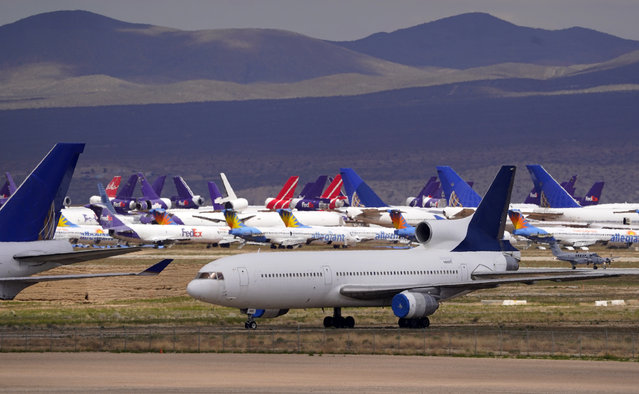 In this March 25, 2020, file photo, passenger and cargo aircraft are seen stored at Southern California Logistics Airport, in Victorville, Calif., to the pandemic. A record drop in U.S. energy consumption this spring was driven by less demand for coal that's burned for electricity and oil that's refined into gasoline and jet fuel. (Photo by Mark J. Terrill/AP Photo/File) 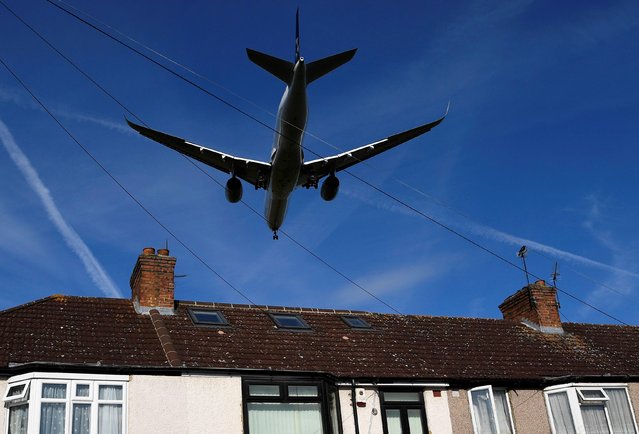