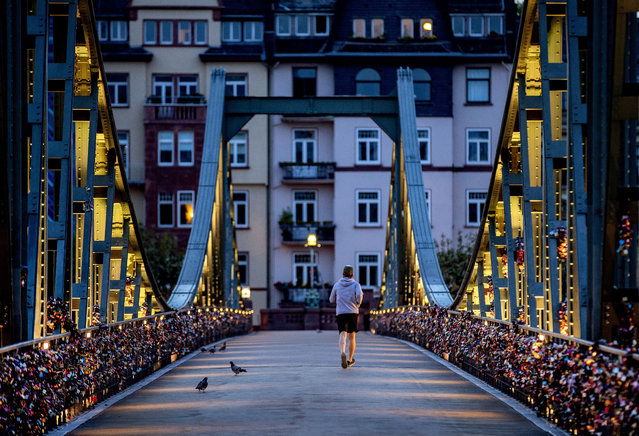 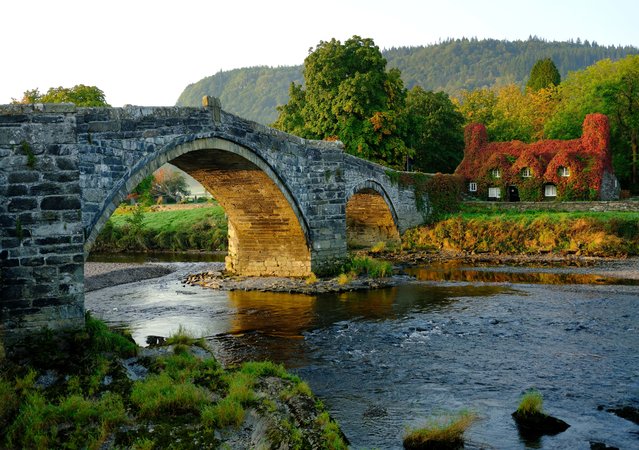 The Virginia creeper on the outside of the Tu Hwnt i'r Bont tea room starts to turn red with the arrival of Autumn in Llanrwst, Britain, September 21, 2020. (Photo by Phil Noble/Reuters) 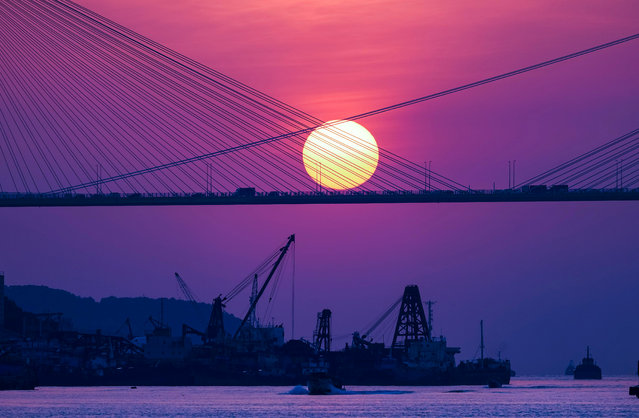 The Tingkau Bridge is seen at sunset on October 26, 2020 in Hong Kong, China. (Photo by Zhang Wei/China News Service via Getty Images) 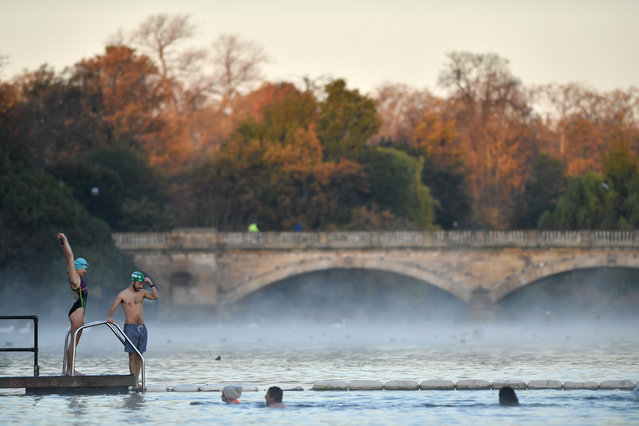 Bathers prepare to swim in the Serpentine in Hyde Park, London on November 4, 2020. England heads into a second national lockdown tomorrow to try to cut coronavirus cases. (Photo by Glyn Kirk/AFP Photo) 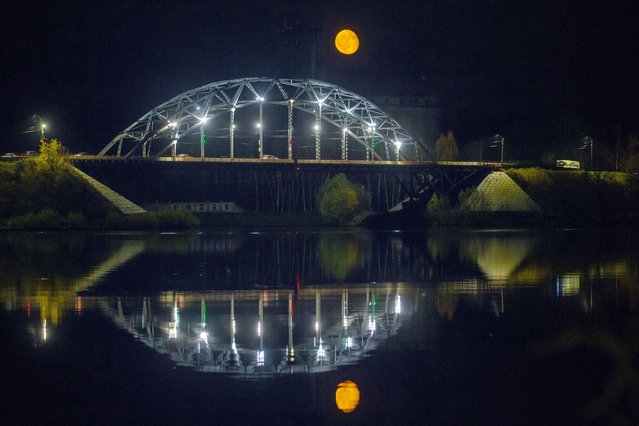 The moon over the Nikolsky Bridge in the town of Kineshma, Ivanovo Region, Russia on November 3, 2020. (Photo by Vladimir Smirnov/TASS) 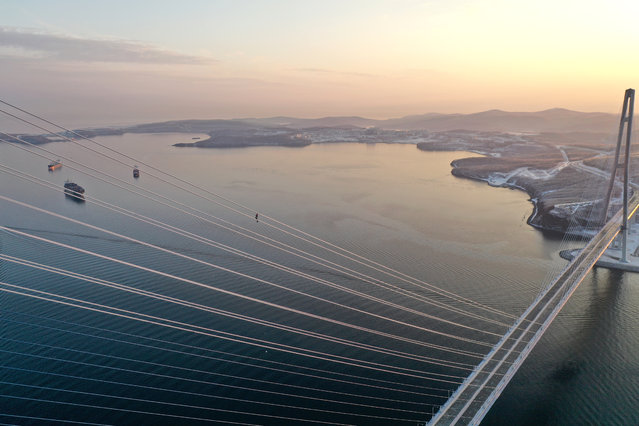 A view of the Russky Bridge across the Eastern Bosphorus Strait, where industrial climbers remove ice from the cables in Vladivostok, Russia on November 25, 2020. The bridge is temporarily closed after a snowstorm, with a ferry service launched between Russky Island and mainland Vladivostok. IPhoto by Viktor Gokhovich/TASS) 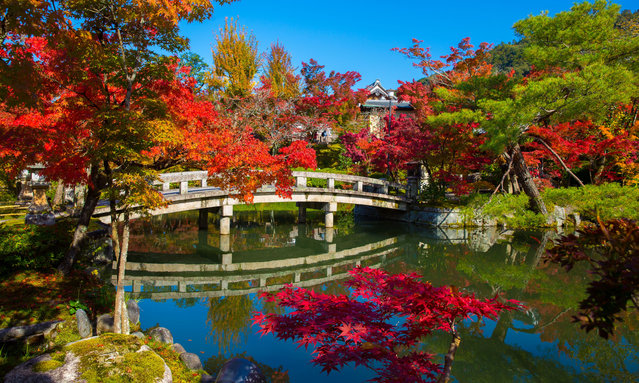 Bridge over Hojo pond seen inside the Eikando Zenrin-Ji Temple in Kyoto during the Japanese autumn leaves season on November 14, 2020. (Photo by Stanislav Kogiku/SOPA Images/Rex Features/Shutterstock) 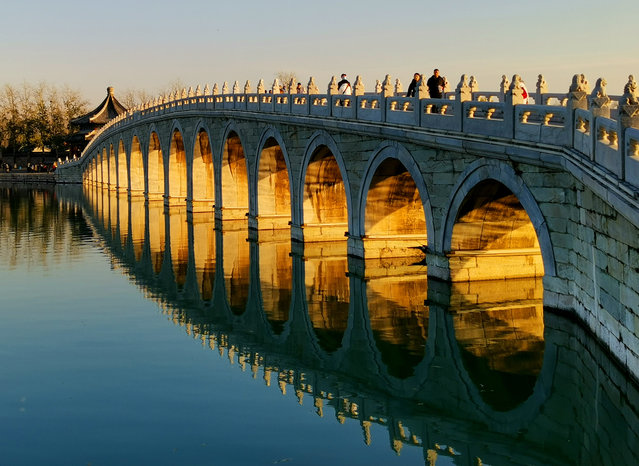 The setting sun shines through the Seventeen-Arch Bridge at the Summer Palace on November 24, 2020 in Beijing, China. (Photo by Gong Wenbao/VCG via Getty Images) 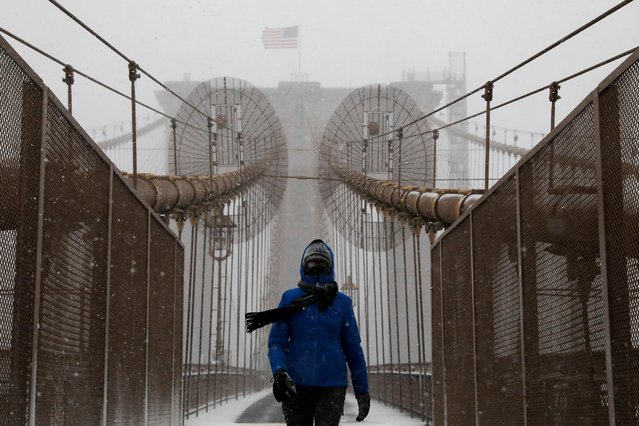 A person walks through the Brooklyn Bridge during a snow storm, amid the coronavirus disease (COVID-19) pandemic, in New York City, New York, U.S., February 1, 2021. (Photo by Brendan McDermid/Reuters) 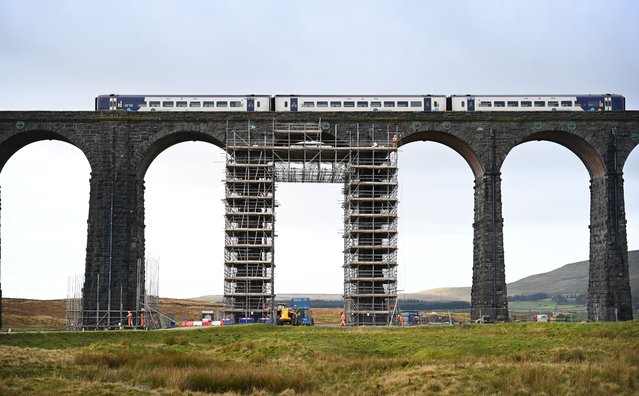 Workers erect scaffolding ahead of planned restoration work on the Ribblehead Viaduct, near Settle, northwest England on November 23, 2020. Restoration is underway on the Grade II listed Ribblehead Viaduct, which opened in 1875 and carries the Settle to Carlisle railway line. The works will re-point eroded mortar joints and replace broken stones on all 24 arches of the 1,318 ft (402m) long structure. (Photo by Paul Ellis/AFP Photo) 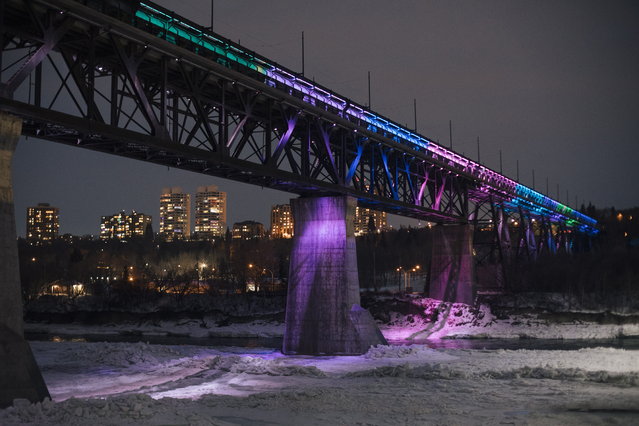 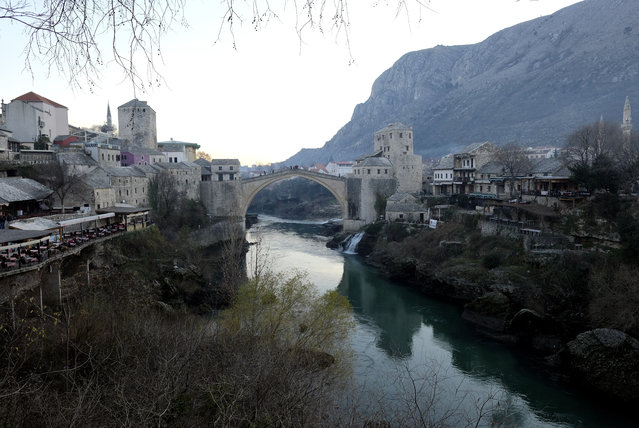 The Old Bridge in Mostar, one of Bosnia's best known landmarks, Bosnia, in Mostar, Bosnia, Sunday, December 20, 2020. Divided between Muslim Bosniaks and Catholic Croats, who fought fiercely for control over the city during the 1990s conflict, Mostar has not held a local poll since 2008, when Bosnia's constitutional court declared its election rules to be discriminatory and ordered that they be changed. (Photo by Kemal Softic/AP Photo) 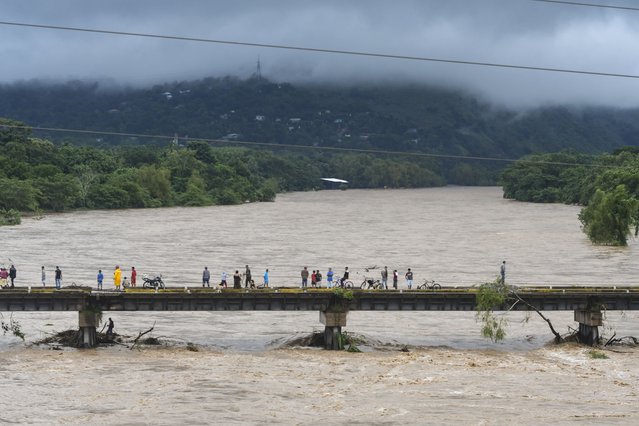 People watch the Humuya river flooding due to heavy rains caused by Eta Hurricane, in Santa Rita, Yoro department, 240 km northern Tegucigalpa, on November 3, 2020. Honduras' authorities reported a small girl died when a house collapsed in San Pedro Sula where Eta caused flooding and forced hundreds of people to evacuate their homes. Eta is forecast to move inland over northern Nicaragua and central Honduras through Wednesday and into Thursday. (Photo by Orlando Sierra/AFP Photo) 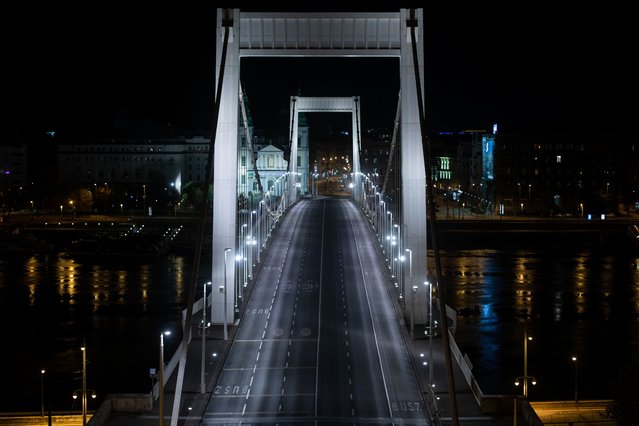 A general view of Elisabeth Bridge during the night curfew on November 20, 2020 in Budapest, Hungary. This weekend Hungary will receive the first batch of Russian made Sputnik V COVID-19 vaccine for trial tests. While the country was largely spared by the first wave of COVID-19 in the spring, the infection rates have surged in this second wave. According to data from the European Center for Disease Prevention and Control (ECDC), the country came in third given its death rate per 100,000 inhabitants, behind the Czech Republic and Belgium. (Photo by Orsi Ajpek/Getty Images) 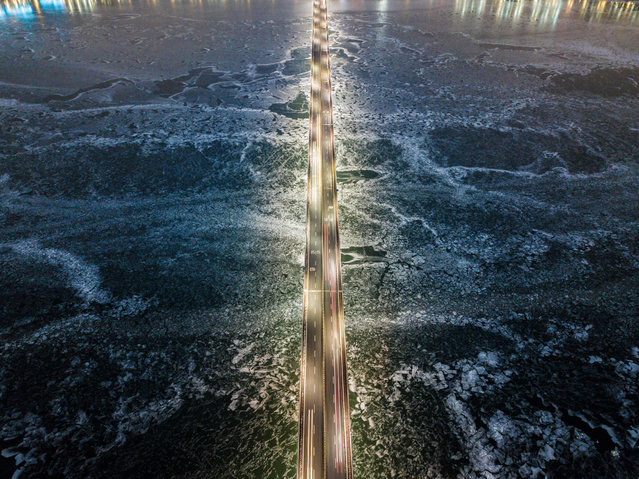