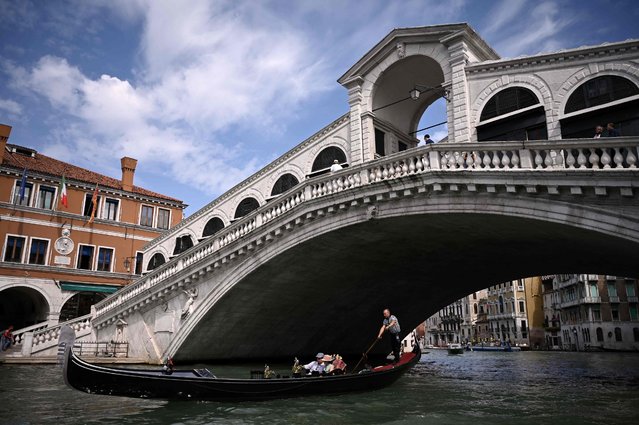 Tourists go for a gondola ride by the 16th-century stone arch Rialto Bridge at the Grand Canal in Venice on September 7, 2021, within a ceremony after the bridge underwent major restoration. (Photo by Marco Bertorello/AFP Photo) 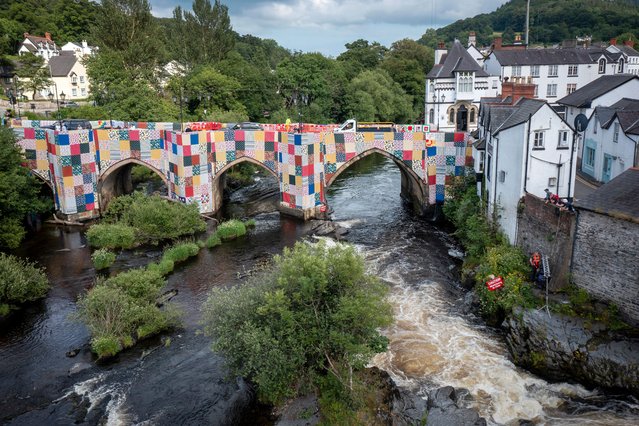 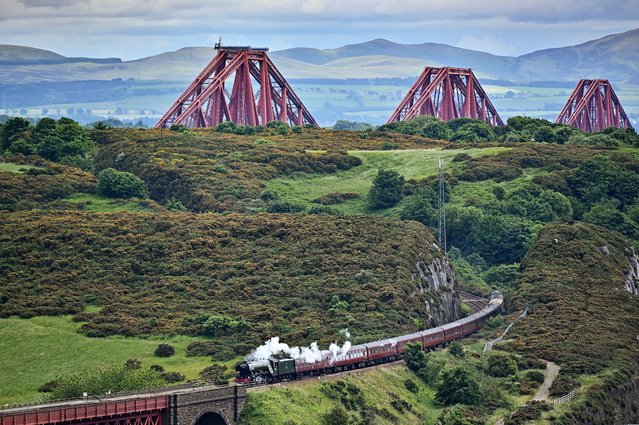 The Flying Scotsman steam train travels across the Forth Bridge, as it makes a journey through Fife on June 25, 2021 in Edinburgh, Scotland. The train will spend two days in Edinburgh where passengers will take a journey over the Forth Bridge in 1960's open carriages with large picture windows. (Photo by Jeff J. Mitchell/Getty Images) 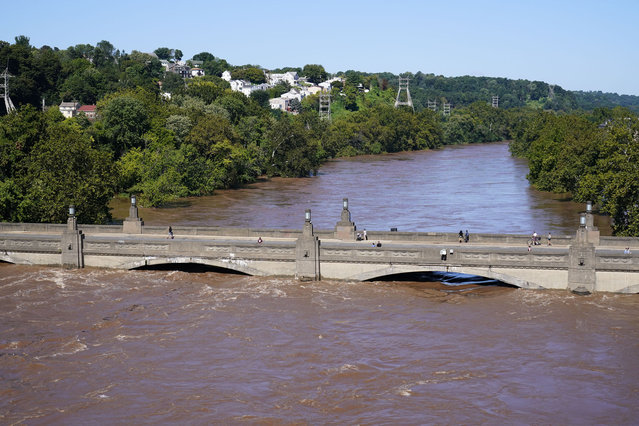 The Schuylkill River exceeds its bank in the Manayunk section of Philadelphia, Thursday, September 2, 2021 in the aftermath of downpours and high winds from the remnants of Hurricane Ida that hit the area. (Photo by Matt Rourke/AP Photo) 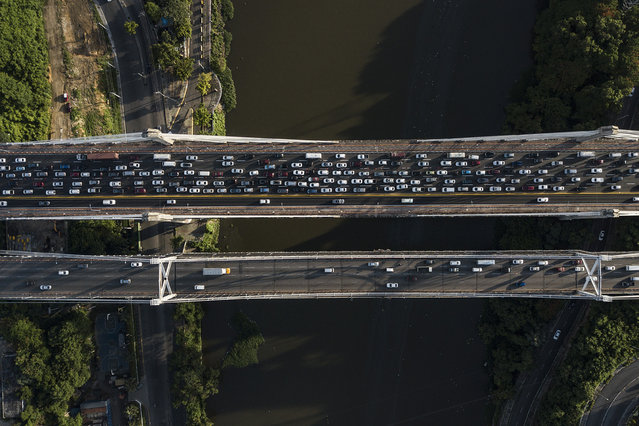 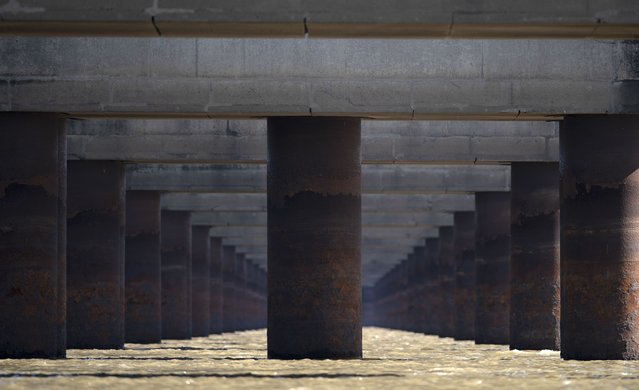 In this July 29, 2021 file photo, the pillars of the massive Rosario-Victoria Bridge are exposed during a drought affecting the Parana River near Rosario, Argentina. At the port city of Santa Fe the river registered a level of 22 centimeters, the lowest in 50 years. (Photo by Victor Caivano/AP Photo/File) 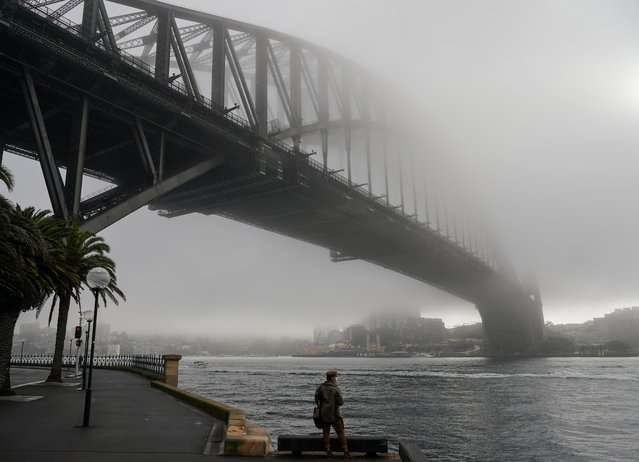 A man wearing a protective face mask takes in the waterfront view underneath the Sydney Harbour Bridge, seen shrouded in fog, during a lockdown to curb the spread of a coronavirus disease (COVID-19) outbreak in Sydney, Australia, June 30, 2021. (Photo by Loren Elliott/Reuters) 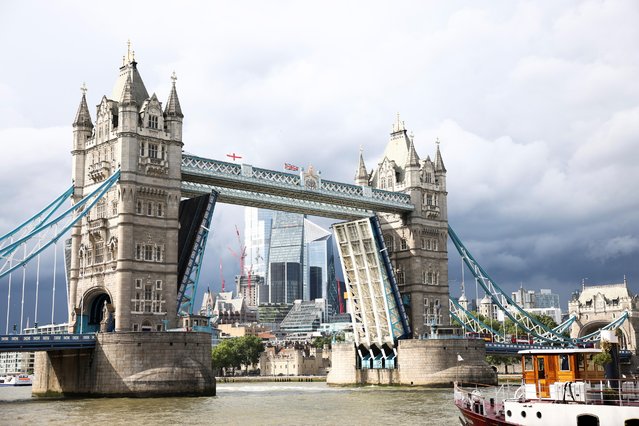 Tower Bridge is seen stuck in the open position, due to a technical fault, in London, Britain, August 9, 2021. (Photo by Henry Nicholls/Reuters) 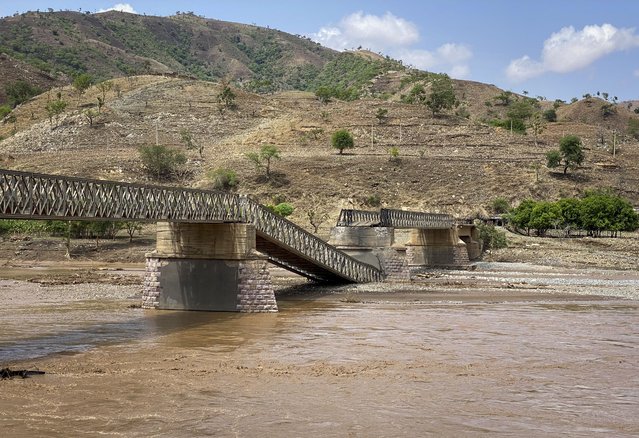 A destroyed bridge over the Tekeze River is seen in the Tigray region of northern Ethiopia Thursday, July 1, 2021. The bridge on a main supply route linking western Tigray that is crucial to delivering desperately needed food to much of Ethiopia's embattled Tigray region has been destroyed, aid groups said Thursday. (Photo by Roger Sandberg/Medical Teams International via AP Photo) 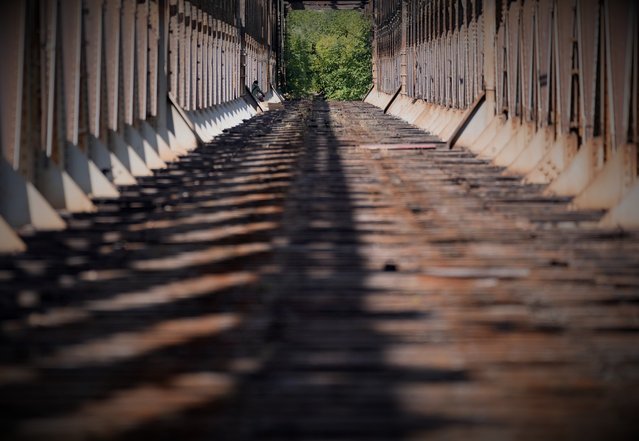 A view of a construction worker on the old railroad bridge over the Sava river in Belgrade, Serbia, Thursday, September 2, 2021. A complete removal of the railway bridge and the closing of the main railway station was completed for the Belgrade Waterfront project designed to rebuild a run-down area at the heart of the Balkan city of two million people. (Photo by Darko Vojinovic/AP Photo) 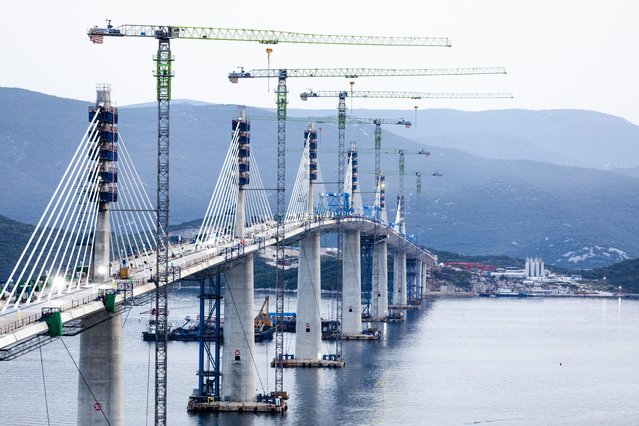 A view of the construction of the Peljesac Bridge in Komarna, Croatia, Wednesday, July 28, 2021. European Union-funded Peljesac Bridge in southern Croatia that has been built by a Chinese state-owned company was opened late Wednesday. The bridge was designed to connect two swaths of Adriatic Sea coastline and passes over a small stretch of Bosnia's territorySeptember 27, 2020. (Photo by AP Photo/Stringer) 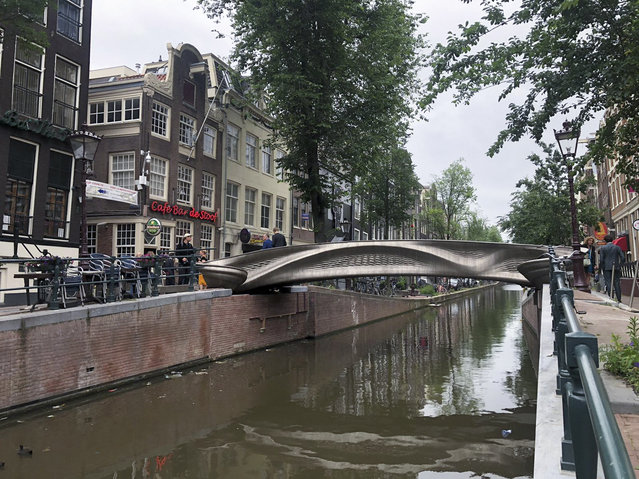 A steel 3D-printed pedestrian bridge spans a canal in the heart of the red light district in Amsterdam, Netherlands, Thursday, July 15, 2021. The distinctive flowing lines of the 12-meter (40-foot) bridge were created using a 3D printing technique called wire and arc additive manufacturing that combines robotics with welding. (Photo by Aleksandar Furtula/AP Photo) 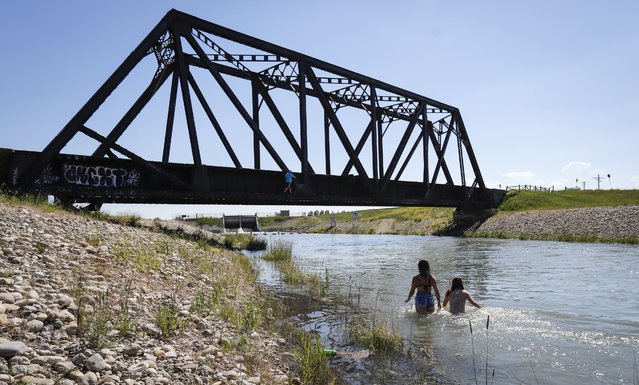 Young people try to beat the heat in an irrigation canal in Chestermere, Alta., Tuesday, June 29, 2021. Environment Canada warns the torrid heat wave that has settled over much of Western Canada won't lift for days. (Photo by Jeff McIntosh/The Canadian Press via AP Photo) 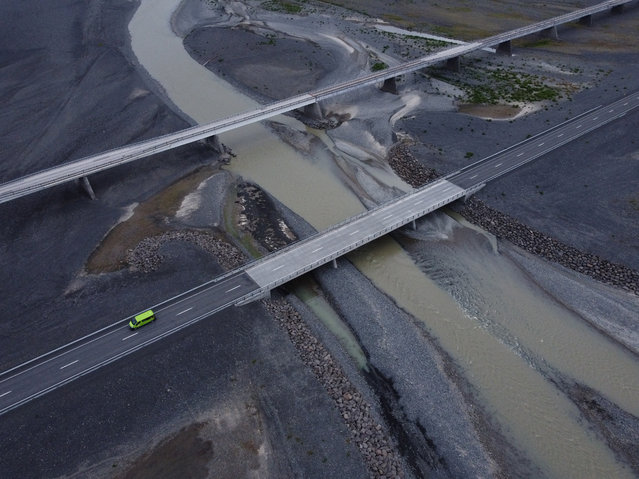 In this aerial view, cars driving on Iceland's ring road, Route 1, cross a small bridge over a river next to a much longer, abandoned bridge on the Skeidararsandur plain on August 18, 2021 near Skaftafell, Iceland. The longer bridge, originally built in the 1970s, crossed the then wide Skeidara river. However, in 2009, due to the retreat of nearby glaciers that feed the Skeidara, the river changed it course, leaving a much diminished flow at the previous location and making the longer bridge superfluous. Iceland is feeling a strong impact from global warming. Since the 1990s 90% of Iceland's glaciers have been retreating and projections for the future show a continued and strong reduction in size of its ice caps. (Photo by Sean Gallup/Getty Images) 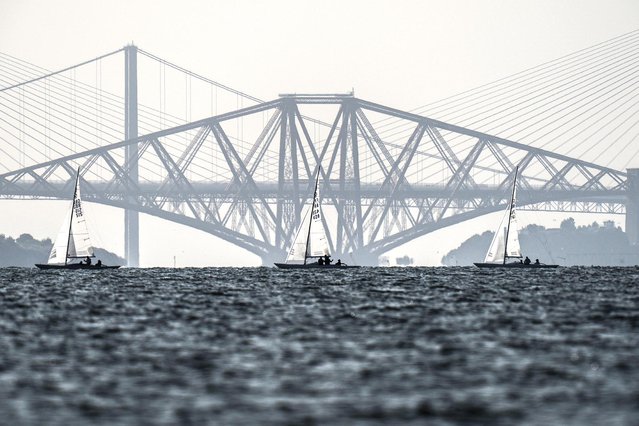 ailors compete in The Edinburgh Cup (named after the Duke of Edinburgh) on the Firth of Forth on Friday, September 3, 2021. (Photo by Jane Barlow/PA Images via Getty Images)
Edit Del
27 Oct 2021 06:45:00, post received 0 comments
Publication archive:
←   →
Popular tags:
All tags
Last searches: