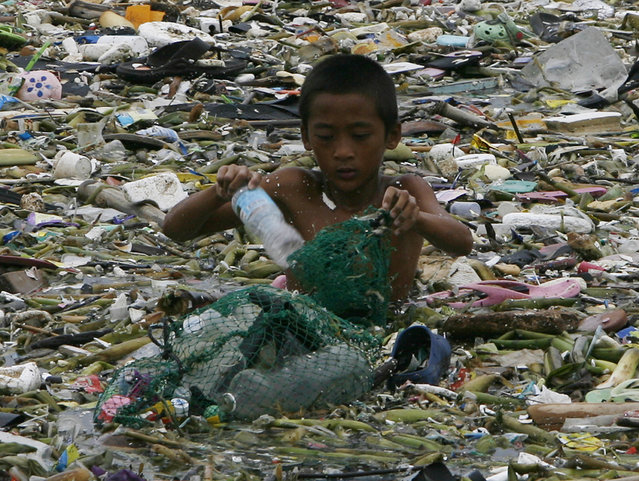 A boy collects plastic materials as he wades in murky waters while surrounded by garbage brought by Tropical Storm Saola, locally named Gener, along a Manila bay July 30, 2012. The Department of Education (DepEd) and local officials announced the suspension of classes in most parts of Metro Manila and some nearby areas on Monday due to heavy rains caused by the storm and the southwest monsoon. The Philippine Atmospheric Geophysical and Astronomical Services Administration said the storm is headed for Taiwan, but warned of rainy weather from the southwest monsoon, local media reported. (Photo by Romeo Ranoco/Reuters) 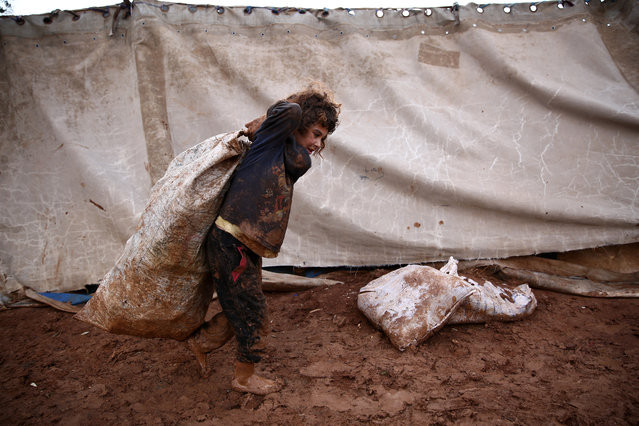 A Syrian child pulls over their back a sack while walking in the mud at a camp for the displaced near the village of Shamarin, near the border with Turkey in the northern Aleppo province, on December 6, 2018. (Photo by Nazeer Al-Khatib/AFP Photo) 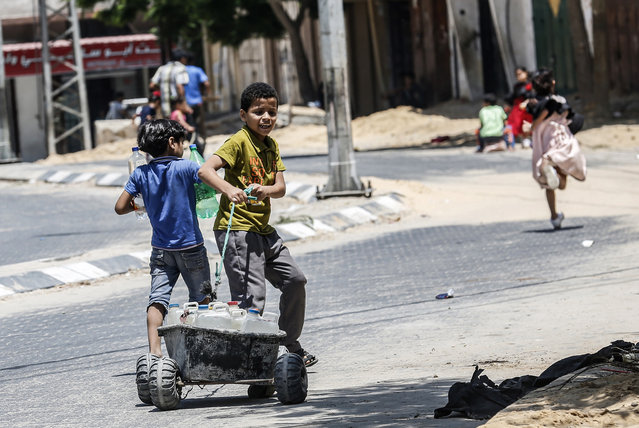 A Palestinian child pulls a cart loaded with jerricans filled with drinking water from public taps in Khan Yunis in the southern Gaza strip on July 10, 2019. The population of Gaza facing a drinking water problem is increasing. Lacking natural resources, the Gaza Strip suffers from a chronic shortage of water, electricity and petrol. More than two-thirds of the population depends on humanitarian aid, which the United Nations says could become uninhabitable by 2020. (Photo by Said Khatib/AFP Photo) 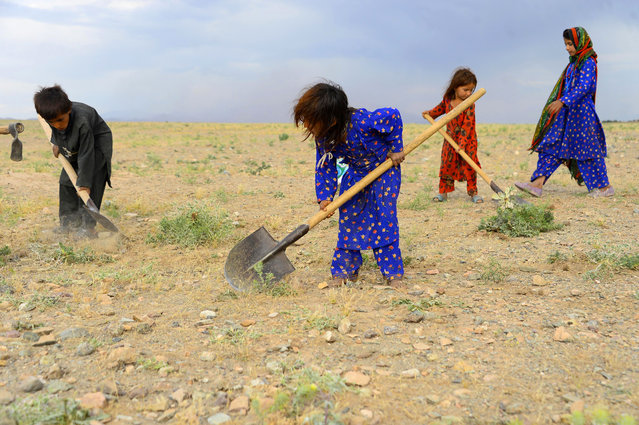 In this photo taken on May 18, 2019, Afghan children collect grass, twigs and other vegetation for fire in a field on the outskirt of Herat province. (Photo by Hoshang Hashimi/AFP Photo) 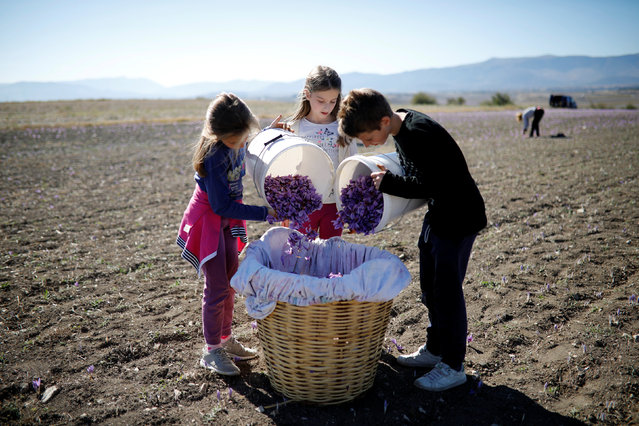 Nikolas Patsiouras, Maria and Evangelia Patsioura fill a basket with saffron flowers at their family's field in the town of Krokos, Greece, October 26, 2018. (Photo by Alkis Konstantinidis/Reuters) 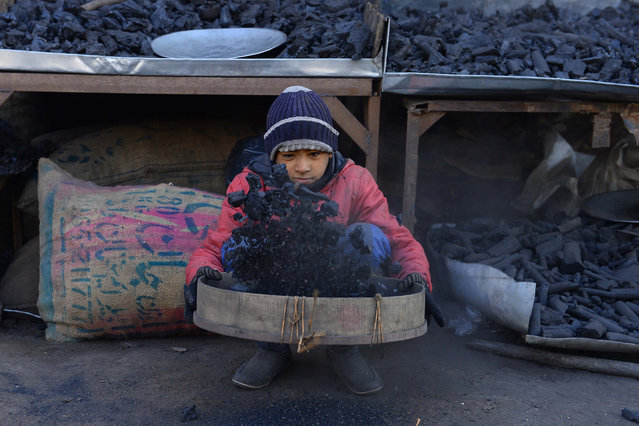 A young Afghan vendor sifts charcoal at his stall in Herat city on December 4, 2018. (Photo by Hoshang Hashimi/AFP Photo) 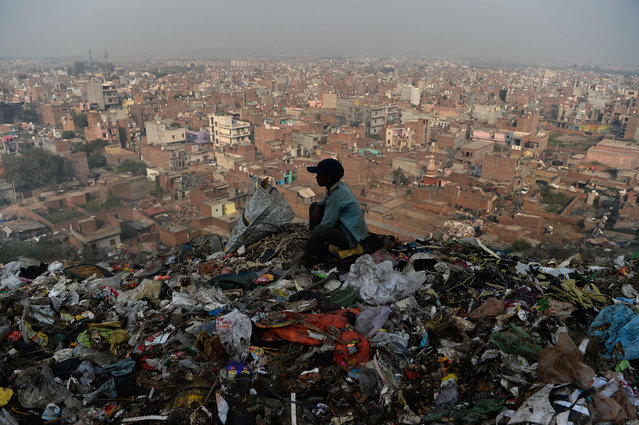 A young Indian ragpicker looks over the city after collecting usable material from a garbage dump at the Bhalswa landfill site in New Delhi, on October 29, 2018. Pollutants from vehicles, burning garbage dumps, building sites and farmers burning crops in regions outside the Indian capital spike in levels during winter in Delhi when air quality often eclipses the World Health Organization' s safe levels. (Photo by Sajjad Hussain/AFP Photo) 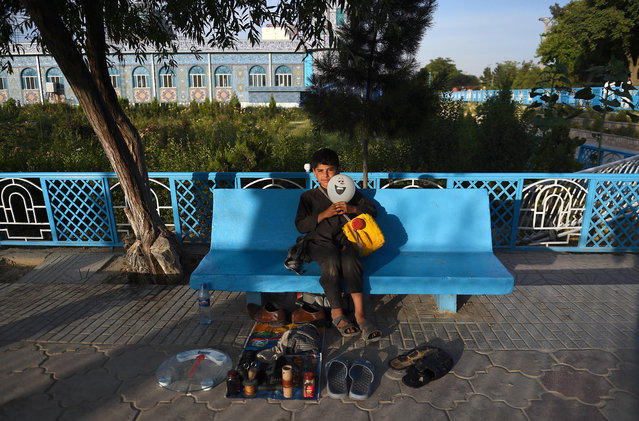 In this photo taken on June 9, 2019, Afghan shoe shiner Qadir, 12, waits for customers along a street in Mazar-i-Sharif. (Photo by Farshad Usyan/AFP Photo) 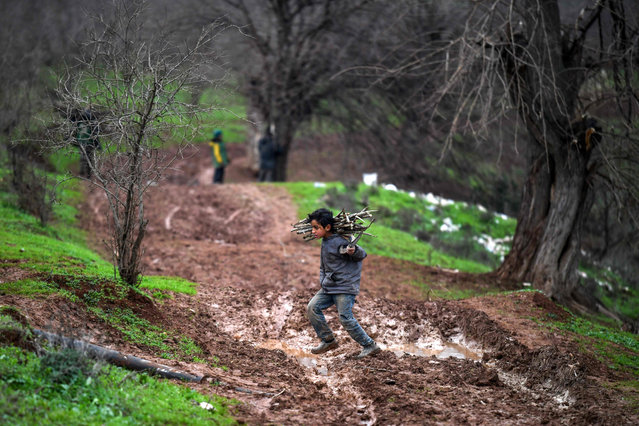 A Syrian boy carries back collected firewood as he returns to a camp for the displaced near Dayr Ballut in the northwest of Aleppo province on January 2, 2019. (Photo by Rami Al Sayed/AFP Photo) 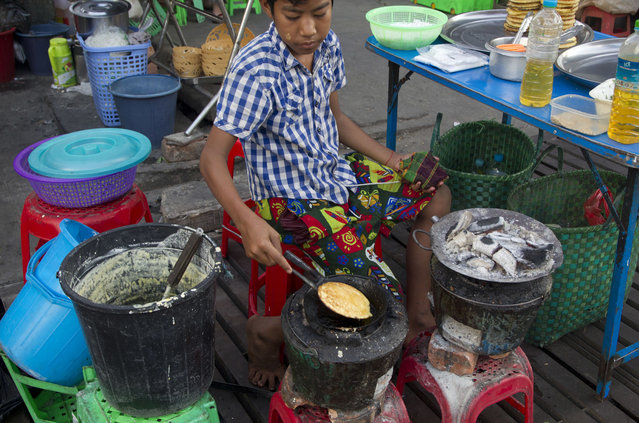 In this Thursday, November 1, 2018, photo, a boy prepares pancakes to sell to passersby in Yangon, Myanmar. A United Nations report says some 486 million people are malnourished in Asia and the Pacific, and progress in alleviating hunger is stalling. (Photo by Thein Zaw/AP Photo) 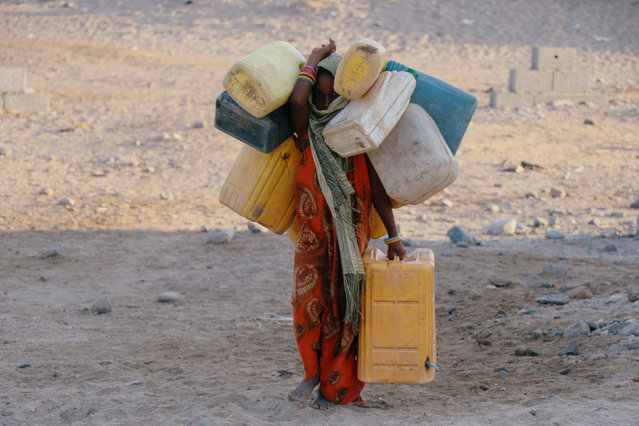 A girl carries jerry cans to fill them up with drinking water at a camp sheltering displaced people from the Red Sea port city of Hodeidah near Aden, Yemen on November 12, 2018. (Photo by Fawaz Salman/Reuters) 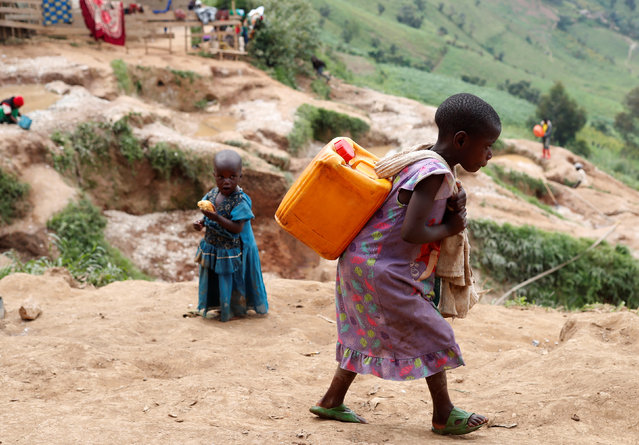 A girl carries a container of water at a coltan mine in Kamatare, Masisi territory, North Kivu Province of Democratic Republic of Congo on December 17, 2018. (Photo by Goran Tomasevic/Reuters) 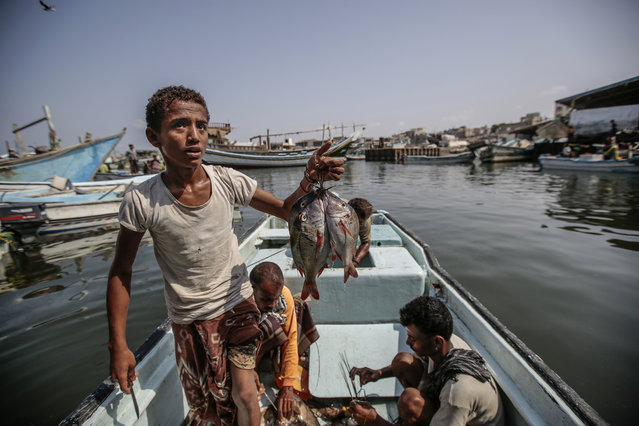 In this September 29, 2018, photo, a boy holds the catch of the day on a boat at the main fishing port, in Hodeida, Yemen. (Photo by Hani Mohammed/AP Photo) 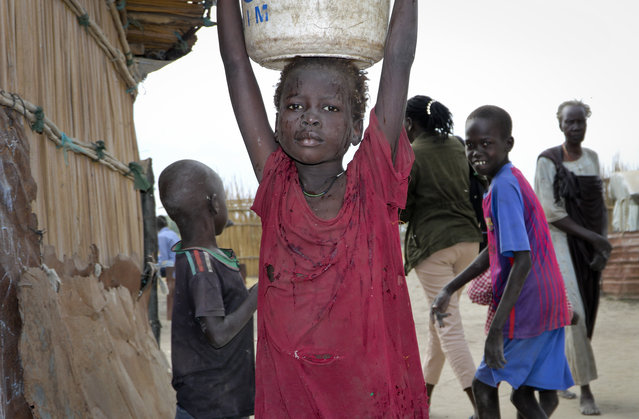 In this photo taken Sunday, December 9, 2018, a young girl carries water on her head in Koythiey displaced person's camp on the outskirts of Bentiu town in South Sudan. Six months ago planning ahead in civil war-torn South Sudan seemed impossible but now, after warring sides signed a new peace deal in September that the government vows will hold, some are starting to rebuild their lives. (Photo by Sam Mednick/AP Photo) 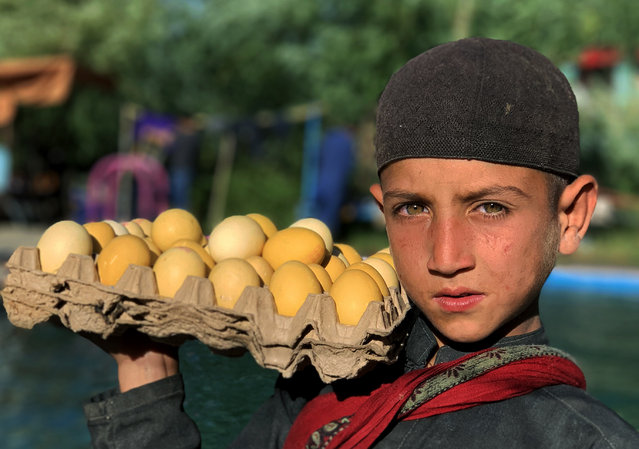 An Afghan child selling boiled eggs at a picnic spot on the outskirts of Kabul, Afghanistan, 16 July 2019. Due to poverty a huge number of Afghan students are not able to continue their education, instead they are forced to work on the streets to be the bread winners of the family. (Photo by Jawad Jalali/EPA/EFE) 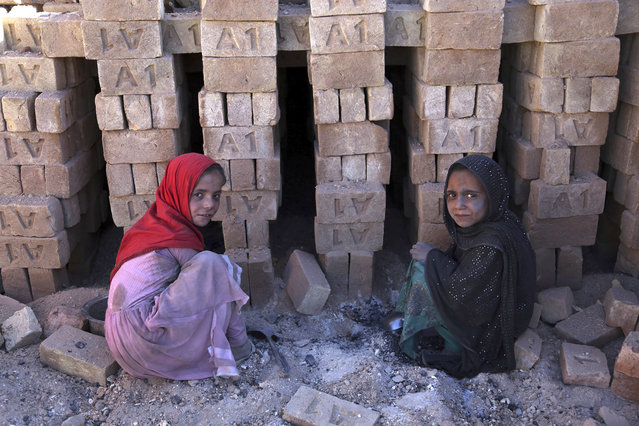 Children sift through the residue from the ashes of coal used at a brick factory on the outskirts of Kabul, Afghanistan, Wednesday, June 12, 2019. Thousands of children work to make money to support their families in Afghanistan. (Photo by Rahmat Gul/AP Photo) 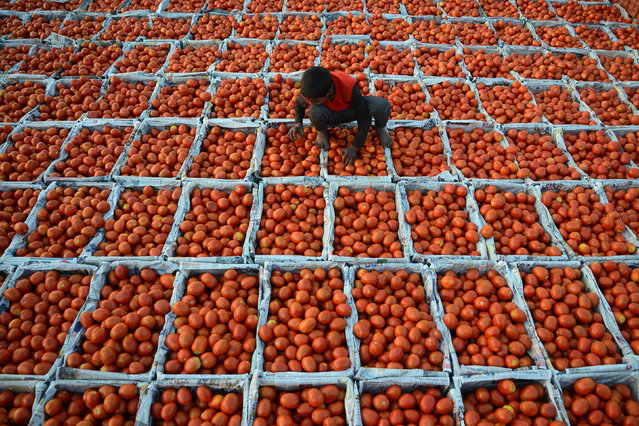 A young Indian boy working at a wholesale vegetable market sorts through tomatoes in Jalandhar on January 23, 2019. (Photo by Shammi Mehra/AFP Photo) 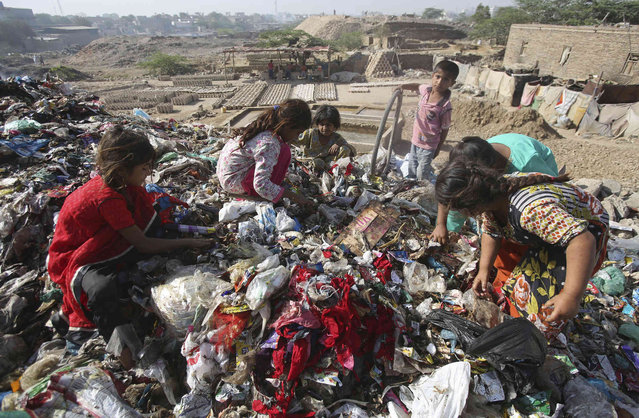 Pakistan children sort through garbage for recycleable items to sell, at a dump in Karachi, Pakistan, Thursday, April 4, 2019. (Photo by Fareed Khan/AP Photo) 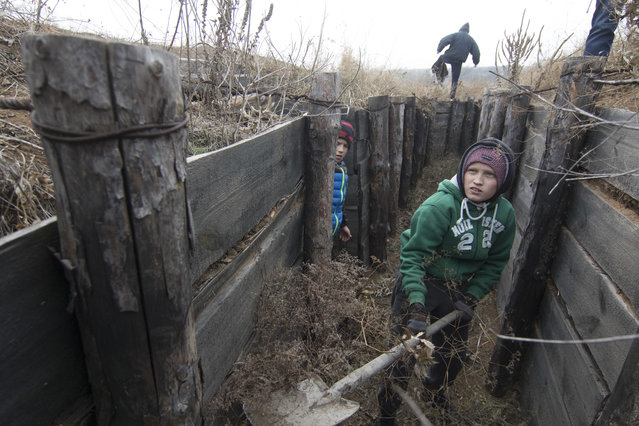 Children from an orphanage volunteer to help the city defenders to strengthen trenches on Ukraine's Army positions near the village of Rybatske 25 km from Mariupol, Ukraine, Monday, November 26, 2018. Ukrainian lawmakers were set to consider a presidential request for the introduction of martial law in the country on Monday following an incident in which Russian coast guard ships fired on Ukrainian navy vessels. (Photo by Sergey Vaganov/AP Photo) 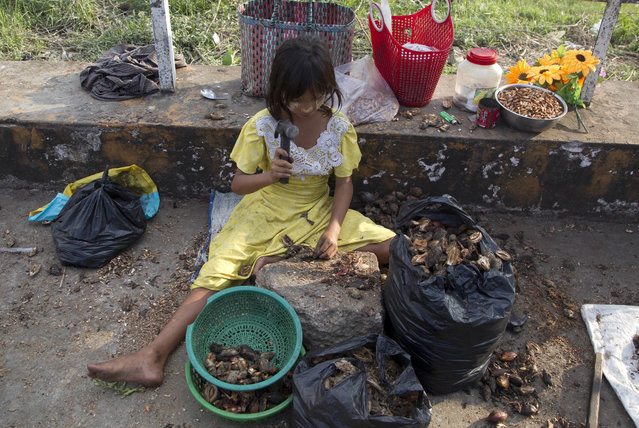 In this Thursday, November 1, 2018, photo, a girl uses a hammer to crack open shells for edible seeds to sell as snacks in Yangon, Myanmar. A United Nations report says some 486 million people are malnourished in Asia and the Pacific, and progress in alleviating hunger is stalling. (Photo by Thein Zaw/AP Photo)
Edit Del
20 Jul 2019 00:01:00, post received 0 comments
Publication archive:
←   →
Popular tags:
All tags
Last searches: