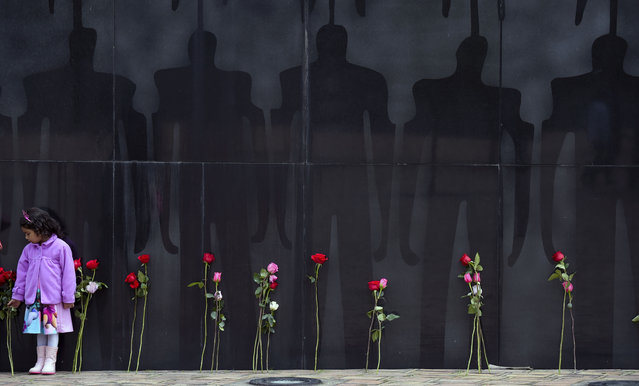 A girl is pictured during the commemoration of the “Day of the National heroes and their families” in Bogota on July 19, 2018. Every July 19 those that have fallen in combat and their relatives are honoured with a ceremony. (Photo by Raul Arboleda/AFP Photo) 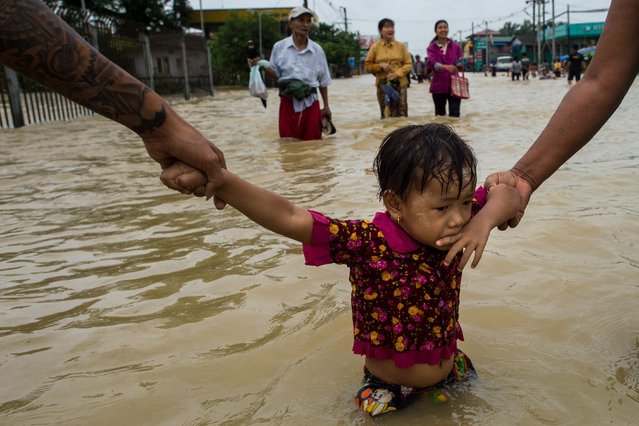 Residents hold onto a child as they walk through floodwaters in the Bago region, some 68 km away from Yangon, on July 29, 2018. Heavy monsoon rains have pounded Karen state, Mon state and Bago region in recent days and show no sign of abating, raising fears that the worst might be yet to come. (Photo by Ye Aung Thu/AFP Photo) 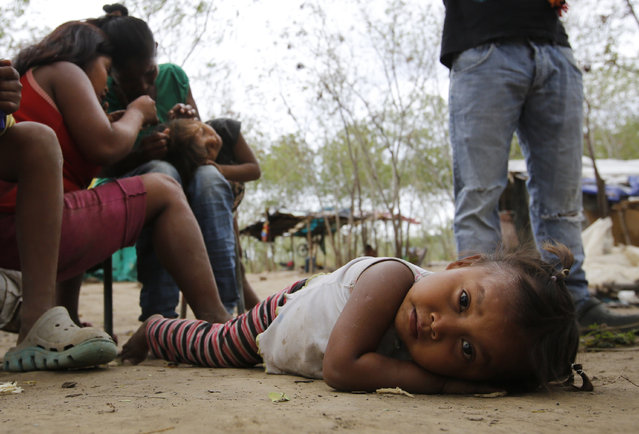 In this June 26, 2018 photo, a Venezuelan indigenous Yupka girl plays on the ground while another gets lice picked from her head at a camp set up in Cucuta, Colombia, near the border with Venezuela. Along the banks of the Tachira River dividing Colombia and Venezuela, many of the indigenous children have lice and distended bellies from malnutrition or parasites. Tribe leader Dionisio Finol said they are better off there than in Venezuela, where at least they can eat. (Photo by Fernando Vergara/AP Photo) 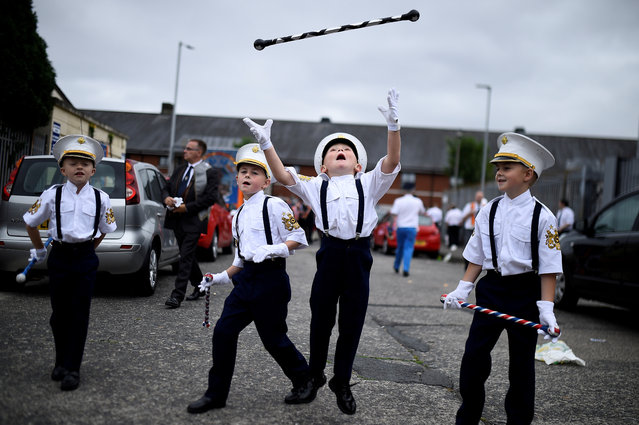 Young members of Loyalist Orders throw a baton in the air as they participate in Twelfth of July celebrations in Belfast, Northern Ireland July 12, 2018. (Photo by Clodagh Kilcoyne/Reuters) 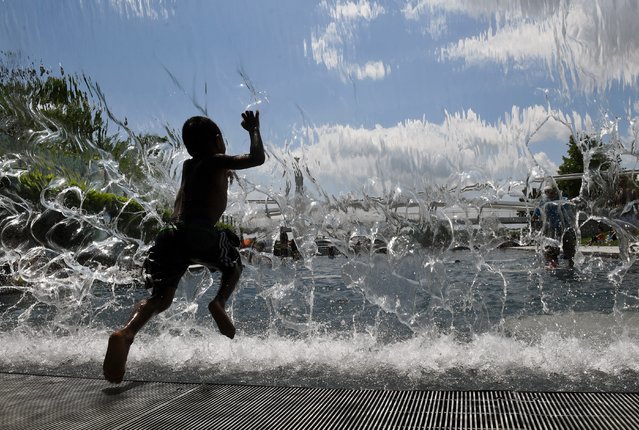 Aman Makonnen, 4, seeks relief from the heat as he jumps through a waterfall feature at the Yards Park in Washington, USA on May 20, 2018. (Photo by Matt McClain/The Washington Post) 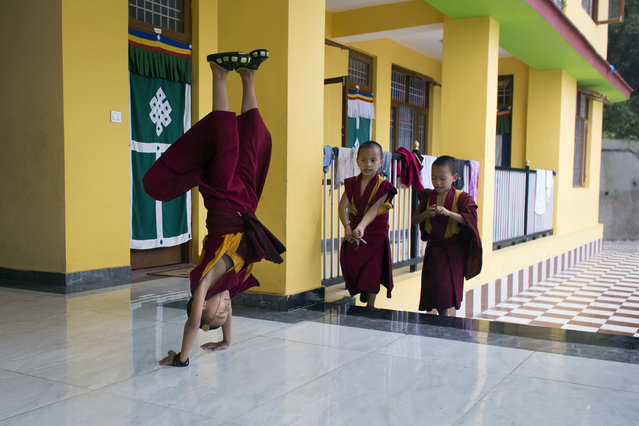 In this Monday, July 9, 2018 photo, nine-year-old Tenzin Kunphen performs a somersault during lunch break at Namgyal Monastery School in Dharmsala, India. The school, which was established in 2017, provides religious and secular education to monks. (Photo by Ashwini Bhatia/AP Photo) 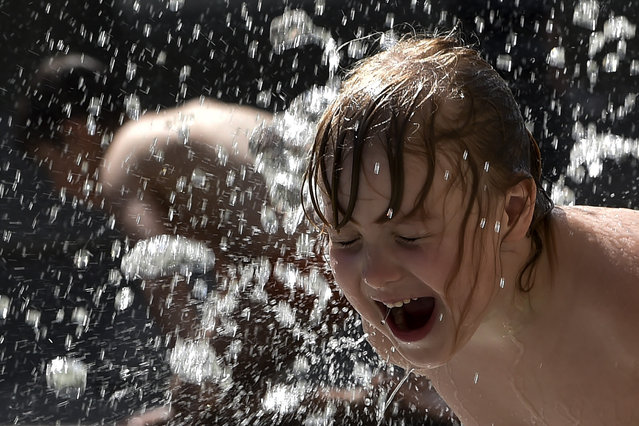 A girl cools off in a fountain in Moscow, Russia on June 22, 2018, where the temperatures reached 30 C. (Photo by Natalia Kolesnikova/AFP Photo) 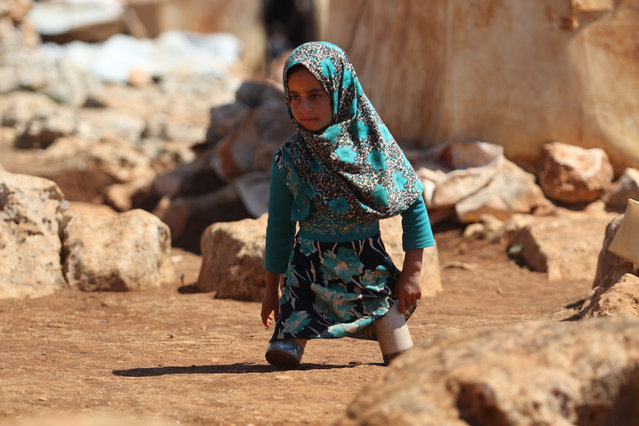 Eight year-old Maya Mohammad Ali Merhi walks using prosthetic legs made by her father from tin cans in a camp for displaced people, in the northern Syrian province of Idlib on June 20, 2018. Maya and her father were both born without lower limbs. Unable to afford real prosthetic limbs, her father made her a pair out of tin cans filled with cotton and scrap pieces of cloth. Maya's family had to leave their home in the Aleppo province to flee battles. (Photo by Aaref Watad/AFP Photo) 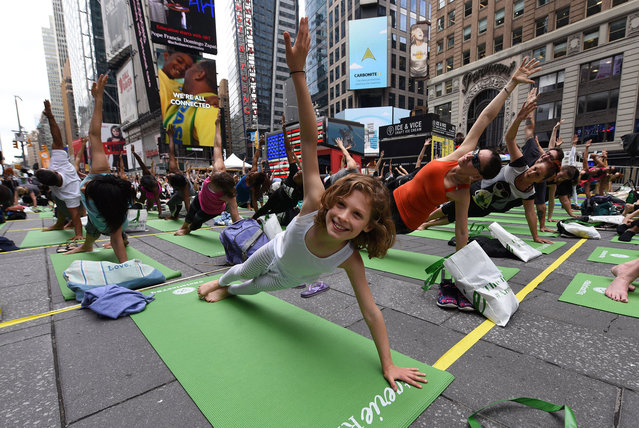 Kate Steinberg age 9 from Montreal, joins thousands of people as they participate in “Mind Over Madness Yoga”, an annual all-day outdoor yoga event during the summer solstice in Times Square on June 21, 2018 in New York. (Photo by Timothy A. Clary/AFP Photo) 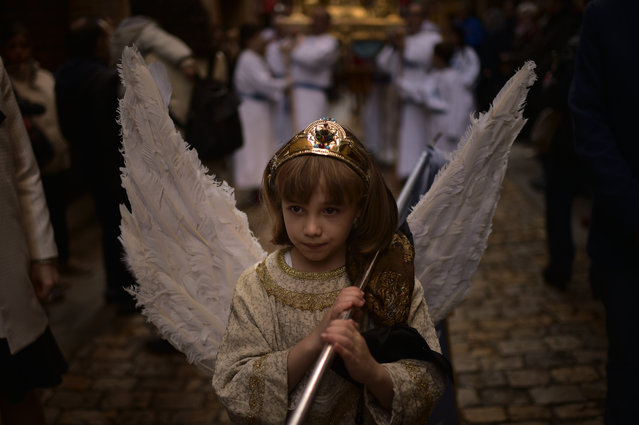 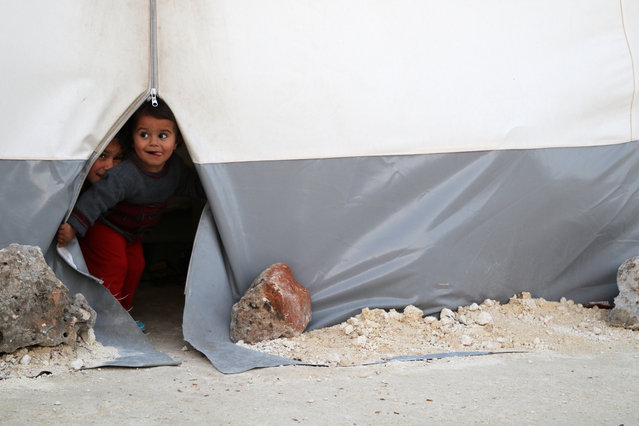 Syrian children evacuated from Eastern Ghouta play at a camp for displaced people in Bab al-Hawa, in Syria's northen province of Idlib, on April 22, 2018. (Photo by Aaref Watad/AFP Photo) 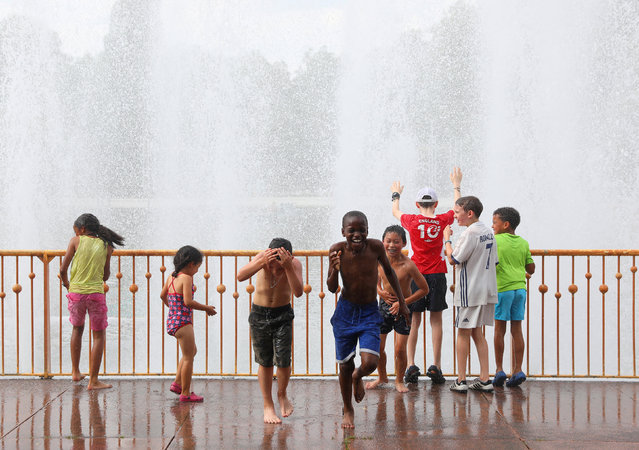 Children play next to a fountain in Battersea Park, London, Britain, July 26, 2018. (Photo by Simon Dawson/Reuters) 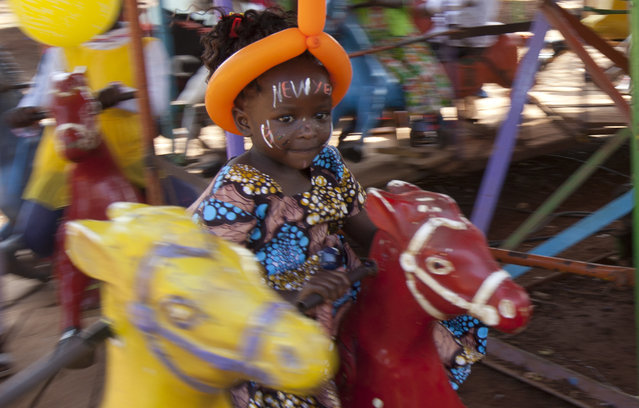 A Kenyan child with a painted face enjoys a ride on a carousel during New Year celebrations at Uhuru Park in Nairobi, Kenya. Monday, January 1, 2018. Hundreds of Kenyans gathered with their children to celebrate at the park. (Photo by Sayyid Abdul Azim/AP Photo) 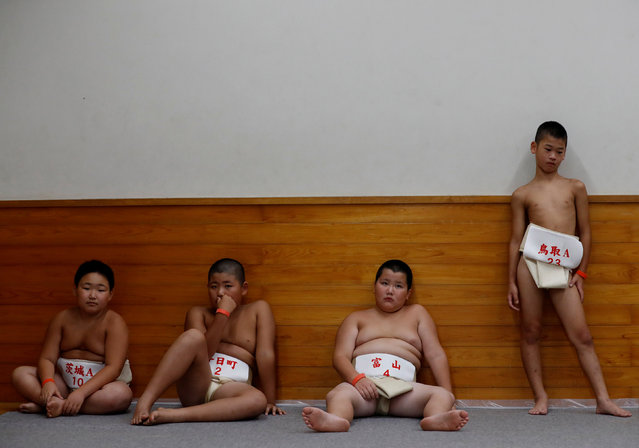 Elementary school sumo wrestlers wait for their turns in a waiting room during the Wanpaku sumo-wrestling tournament in Tokyo, Japan July 29, 2018. (Photo by Kim Kyung-Hoon/Reuters) 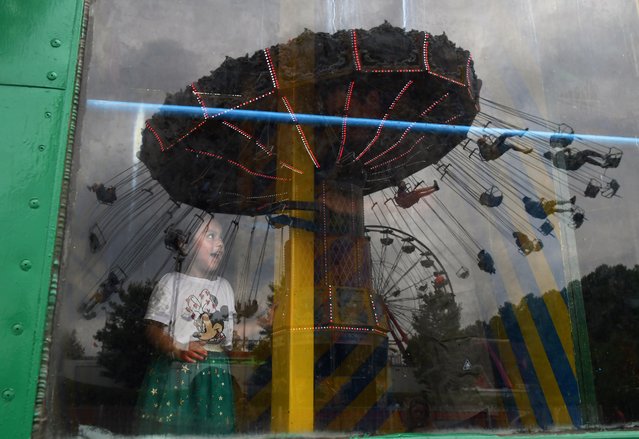 Emily Barroso, 3, watches people on the Wave Swinger ride reflected on a window of Lily’s Storyland attraction at a carnival during the Celebrate Fairfax festival in Fairfax, Va. on June 15, 2018. (Photo by Matt McClain/The Washington Post) 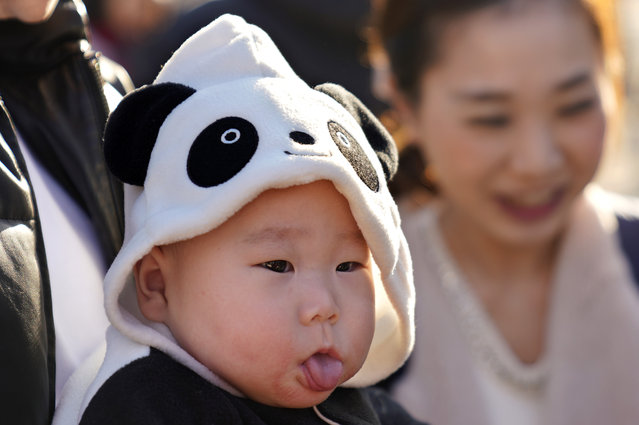 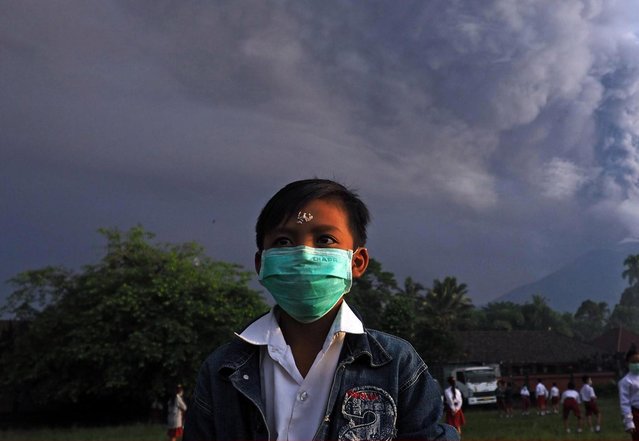 An elementary school student with a face mask is seen in a school ground before school in Rendang village of Karangasem, Bali, Indonesia on November 28, 2017. Until today, the students are still in school as usual, even though the government increased the volcano alert to highest level in 7 kilometer radius range of Mount Agung and extend the closure of I Gusti Ngurah Rai International Airport, Bali. (Photo by Mahendra Moonstar/Anadolu Agency/Getty Images) 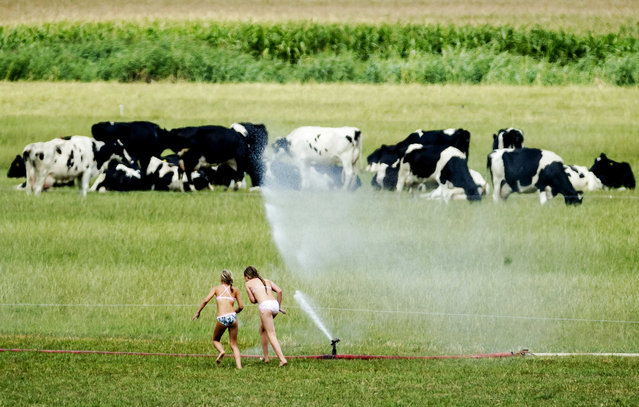 Two girls play with a sprinkler as a field is being sprayed with water in the area around Amerongen, The Netherlands, 18 July 2018. Large parts of Europe are experiencing a long stretch of warm summer weather with little precipation. (Photo by Robin van Lonkhuijsen/EPA/EFE)
Edit Del
09 Aug 2018 00:01:00, post received 0 comments
Publication archive:
←   →
Popular tags:
All tags
Last searches: