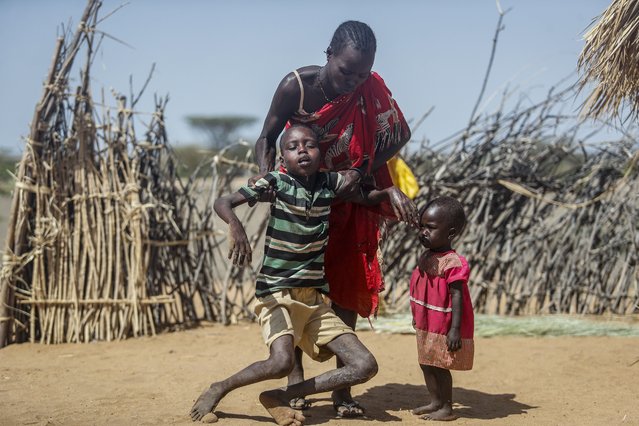 A mother helps her malnourished son stand after he collapsed near their hut in the village of Lomoputh in northern Kenya, May 12, 2022. Russian, French and American leaders are crisscrossing Africa in July 2022, to win support for their positions on the war in Ukraine, an intense competition for influence the continent has not seen since the Cold War. (Photo by Brian Inganga/AP Photo/File) 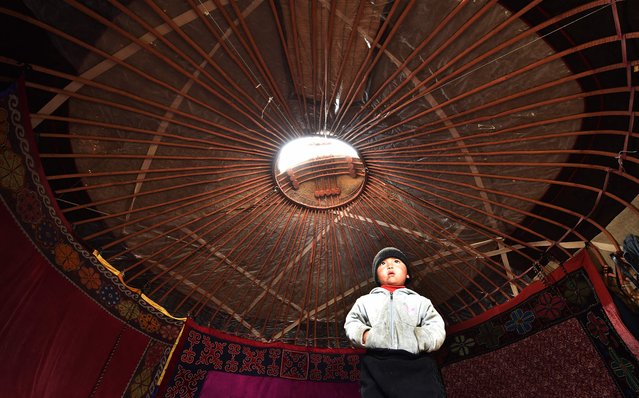 A boy stands in the yurt, the traditional portable dwelling on nomads on the Suusamyr Plateau, 2,500 meters above sea level, close to the ancient network of trade routes of the Silk Road between East and West, some 200 kilometres from Bishkek, the capital of Kyrgyzstan, on August 10, 2022. (Photo by Vyacheslav Oseledko/AFP Photo) 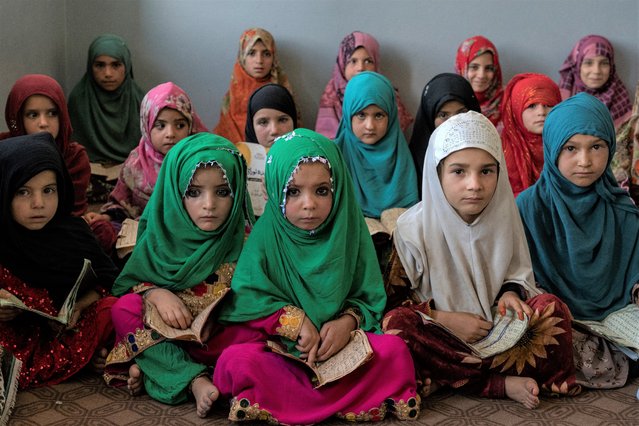 Afghan girls read the Quran in the Noor Mosque outside the city of Kabul, Afghanistan, Wednesday, August 3, 2022. Maulvi Bakhtullah, the head of the mosque, said that the number of girls who come to this mosque to learn Quran has multiplied after the closure of public schools. For most teenage girls in Afghanistan, it’s been a year since they set foot in a classroom. With no sign the ruling Taliban will allow them back to school, some girls and parents are trying to find ways to keep education from stalling for a generation of young women. (Photo by Ebrahim Noroozi/AP Photo) 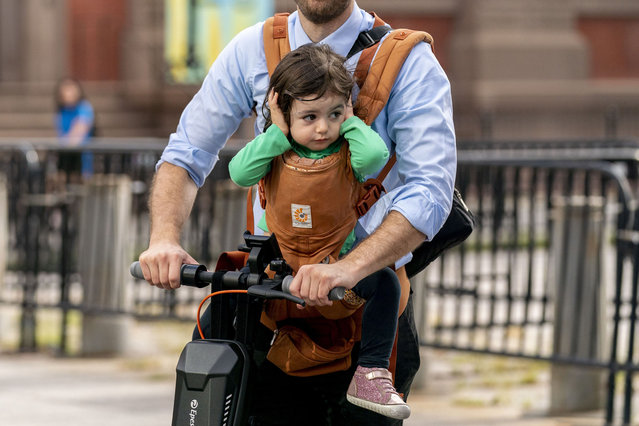 A child strapped to their father covers their ears as the Too Much Talent Band performs during a rally to urge President Joe Biden to cancel student debt near the White House in Washington, Wednesday, July 27, 2022. (Photo by Andrew Harnik/AP Photo) 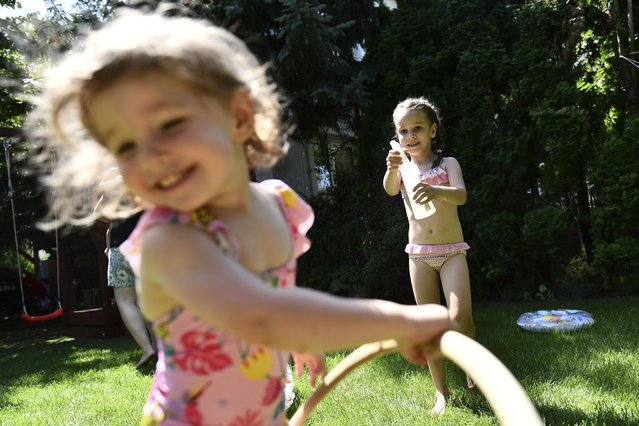 Children play in their grandmother's garden in a suburb of Budapest, Hungary, Thursday, July 21, 2022. Hungary has experienced several heat waves since mid June with day-time temperatures rising to 40 degrees Celsius and remaining at tropical levels through the night. In fact, the country recently shattered record for its hottest night ever when temperature of 25.4 C was measured in Budapest on July 26. (Photo by Anna Szilagyi/AP Photo) 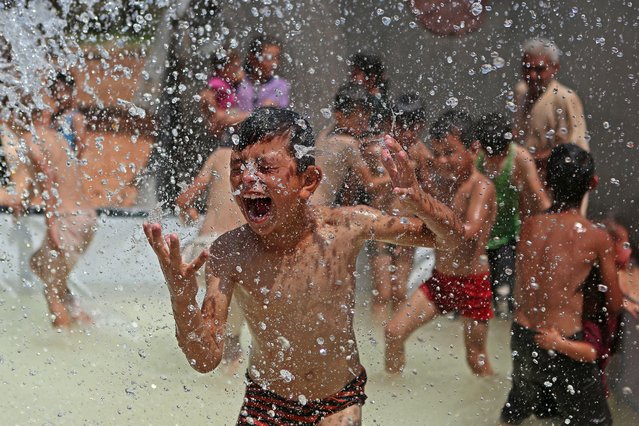 A Syrian boy reacts as he gets sprayed with water in a portable swimming pool set up by volunteers, at a camp for the displaced in the rebel-held town of Kafr Yahmul in the northern countryside of Idlib on August 10, 2022. (Photo by Aaref Watad/AFP Photo) 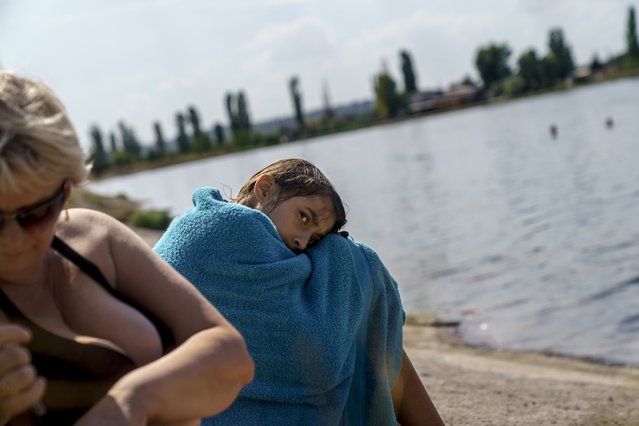 Anastasiia Aleksandrova, 12, center, sits next to her grandmother, Olena, for a picnic at a lake in Sloviansk, Donetsk region, eastern Ukraine, Monday, August 8, 2022. “I don't have anyone to hang out with. I sit with the phone all day”, Anastasiia said from the bank of the lake. “My friends left and my life has changed. It became worse due to this war”. (Photo by David Goldman/AP Photo) 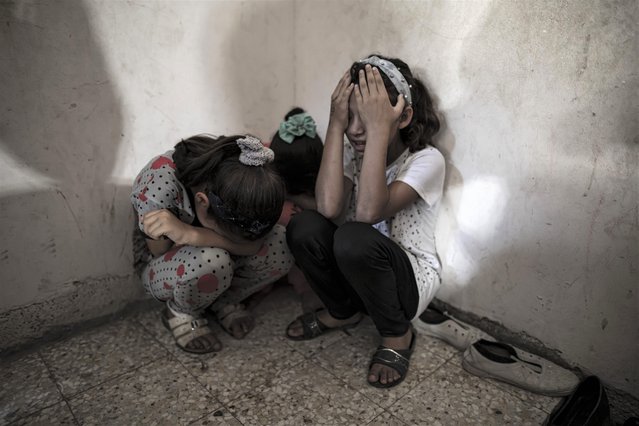 Young Palestinian girls react during the funeral of 11-year-old Layan al-Shaer in Khan Younis, in the Gaza Strip, Thursday, August 11, 2022. On Thursday, Layan died of her wounds after she was injured in last week's Israeli air strikes. (Photo by Fatima Shbair/AP Photo) 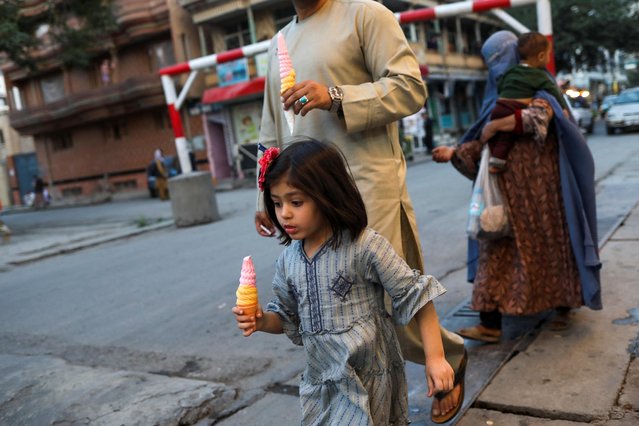 An Afghan girl with her father walk in a street in Kabul, Afghanistan on June 5, 2022. (Photo by Ali Khara/Reuters) 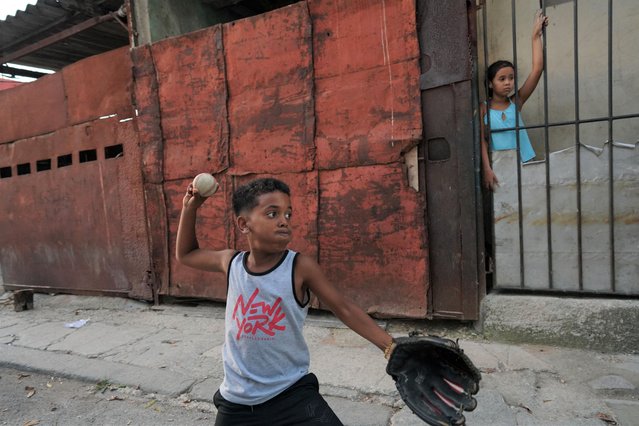 Kevin Kindelan, 8, practices baseball in front of his house in Havana, Cuba on July 15, 2022. Success in baseball, Cuba's national past time and a favorite pursuit of former Cuban leader Fidel Castro, is increasingly measured beyond its borders. That mirrors a broader exodus of Cubans from the stagnating communist-run island racked by social and economic crisis. (Photo by Alexandre Meneghini/Reuters) 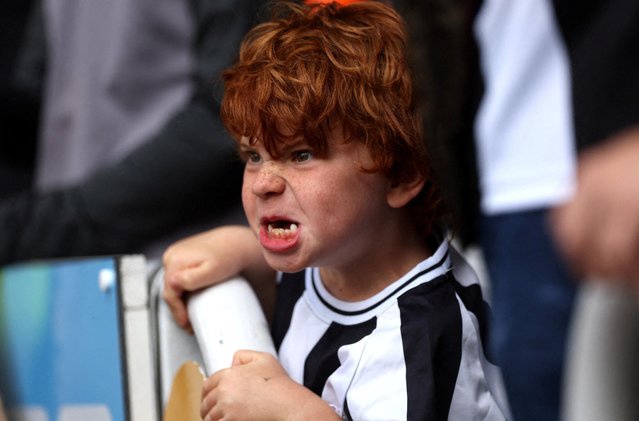 Newcastle United fan inside the stadium before the match against Nottingham Forest, St James' Park, Newcastle, Britain on August 6, 2022. (Photo by Lee Smith/Action Images via Reuters) 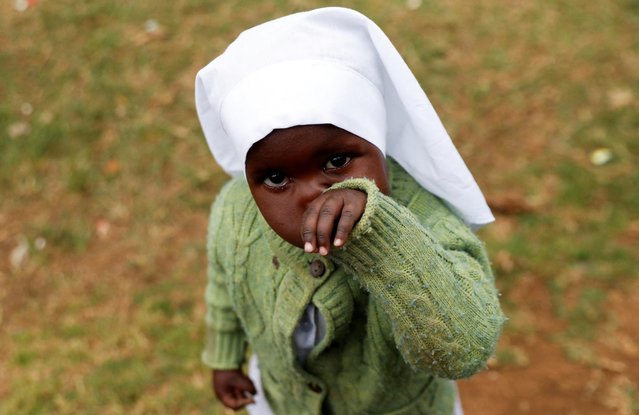 A child is seen before attending the Sunday prayers after the general election conducted by the Independent Electoral and Boundaries Commission (IEBC) at the St. Michael Legio Maria of African Church Mission within Highrise, in Kibera district of Nairobi, Kenya on August 14, 2022. (Photo by Thomas Mukoya/Reuters) 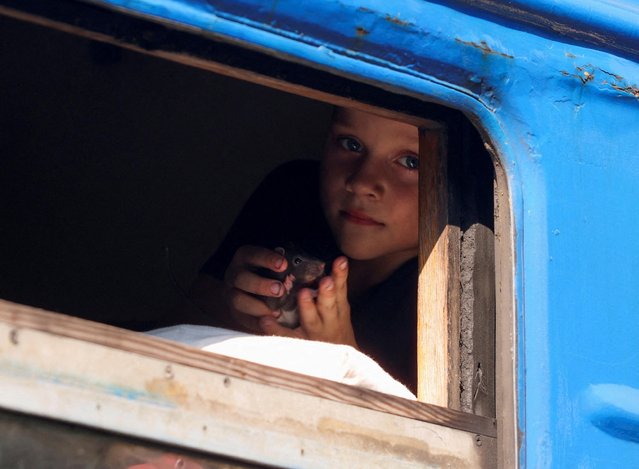 A youngster looks out the window of a train to Dnipro and Lviv during an evacuation effort from war-affected areas of eastern Ukraine, amid Russia's invasion of the country, in Pokrovsk, Donetsk region, Ukraine on August 19, 2022. (Photo by Ammar Awad/Reuters) 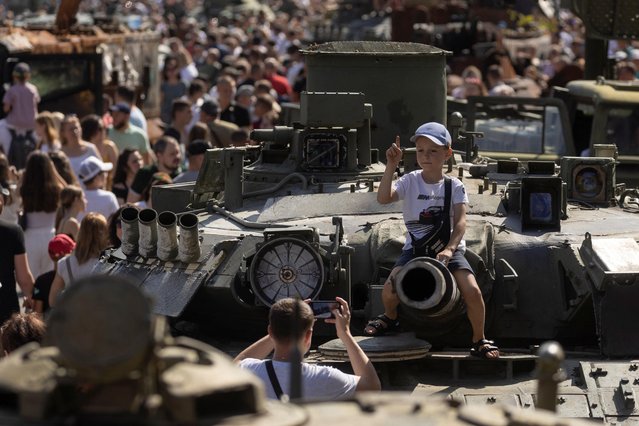 A boy sits atop of a tank at an exhibition of destroyed Russian military vehicles and weapons, dedicated to the upcoming country's Independence Day, amid Russia's attack on Ukraine, in the centre of Kyiv, Ukraine on August 21, 2022. (Photo by Valentyn Ogirenko/Reuters) 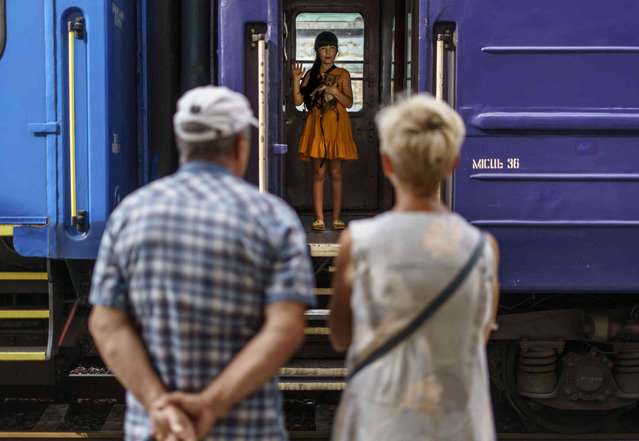 A young girl holds her dog while waving goodbye to her grandparents from an evacuation train departing Pokrovsk, Donetsk region, eastern Ukraine, Tuesday, August 2, 2022, for a safer part of the country to the west. The government issued an order to residents to leave the Donetsk region in the face of the Russian offensive as they are preparing for fall and winter and fear that many there may not have access to heating, electricity, or even clean water. (Photo by David Goldman/AP Photo) 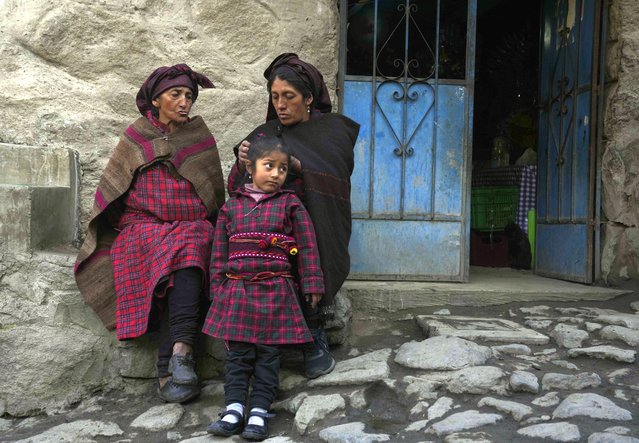 Women talk while combing a girl's hair in Tupe, Peru, Tuesday, July 19, 2022. As Peru's President Pedro Castillo marks the first anniversary of his presidency, his popularity has been decimated by his chaotic management style and corruption allegations, but in rural areas like Tupe, voters believe the fault for the executive crisis lies not only with Castillo, but with Congress, which has sought to remove him twice. (Photo by Martin Mejia/AP Photo) 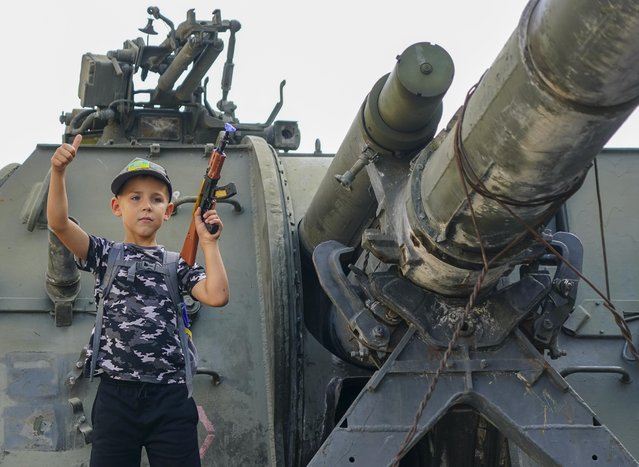 Schoolboy Lev Morilyi gripped his toy AK-47 on a destroyed Russian tank on August 20, 2022 as he declared: “We will defeat Putin“. Crfowds gather in central Kyiv to look at a display of destroyed Russian tanks that have been placed on the Citys main street ahead oif the countries national day on Wednesday. (Photo by Chris Eades/The Sun) 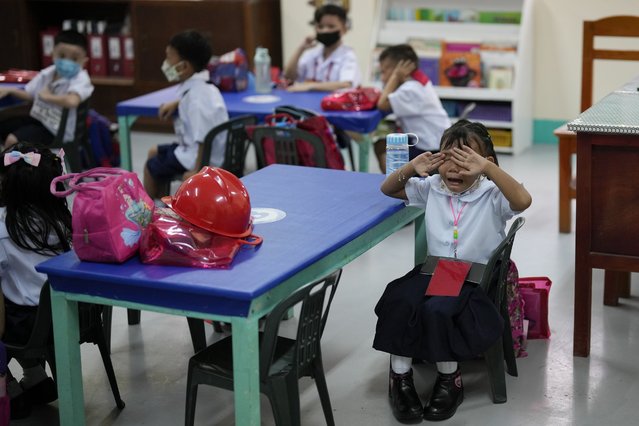 A girl cries during the opening of classes at the San Juan Elementary School in Pasig, Philippines on Monday, August 22, 2022. Millions of students wearing face masks streamed back to grade and high schools across the Philippines Monday in their first in-person classes after two years of coronavirus lockdowns that are feared to have worsened one of the world's most alarming illiteracy rates among children. (Photo by Aaron Favila/AP Photo) 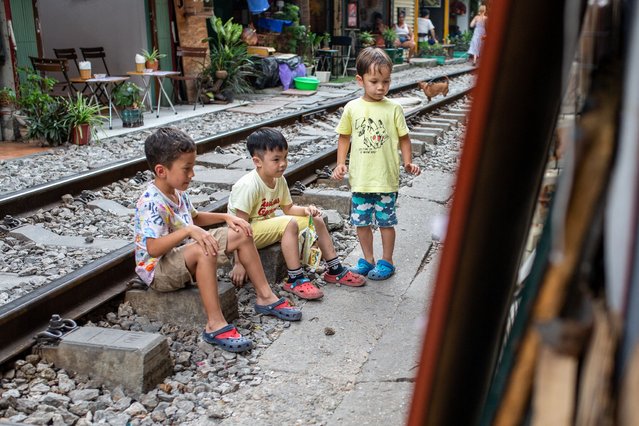 A view of popular train street in the old quarter of Hanoi, Vietnam on July 30, 2022. Hanoi Train Street is one of the most well-known and exciting tourist destinations in the city and trains pass the street twice a day close to buildings on either side of the tracks. (Photo by Chris Humphrey/Anadolu Agency via AFP Photo) 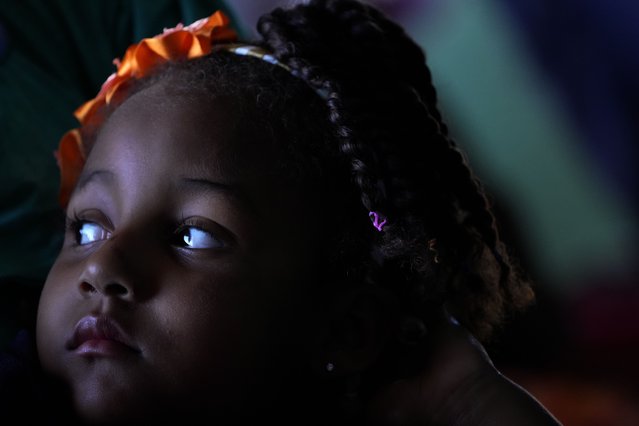 A girl looks on during her baptism in the chapel of the Kalunga quilombo, during the culmination of the week-long pilgrimage and celebration for the patron saint “Nossa Senhora da Abadia” or Our Lady of Abadia, in the rural area of Cavalcante in Goias state, Brazil, Monday, August 15, 2022. (Photo by Eraldo Peres/AP Photo)
Edit Del
10 Sep 2022 04:22:00, post received 0 comments
Publication archive:
←   →
Popular tags:
All tags
Last searches: