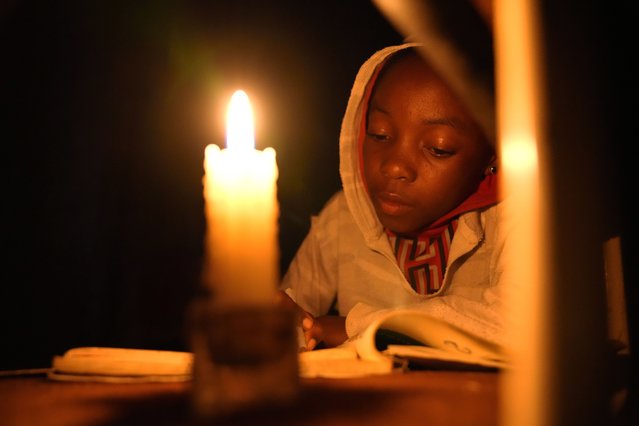 Tracy Carlos uses a candlelight to do her homework in Mabvuku on the outskirts of Harare on Wednesday, August 3, 2022.Because of lengthy power cuts, the children do their homework by a candle, although their parents press them to use it sparingly. Her father Jeff Carlos says he gets about $100 dollars a month from his job as an overnight security guard for a church and the bar next door. Rising prices and a fast-depreciating currency have pushed many Zimbabweans to the brink, reminding people of when the southern African country faced world-record inflation of 5 billion % in 2008. (Photo by Tsvangirayi Mukwazhi/AP Photo) 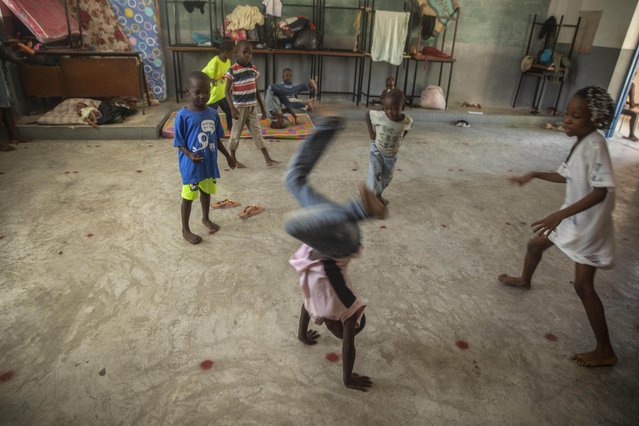 Children play in a school turned into a shelter after they were forced to leave their homes in Cite Soleil due to clashes between armed gangs, in Port-au-Prince, Haiti, Saturday, July 23, 2022. (Photo by Joseph Odelyn/AP Photo) 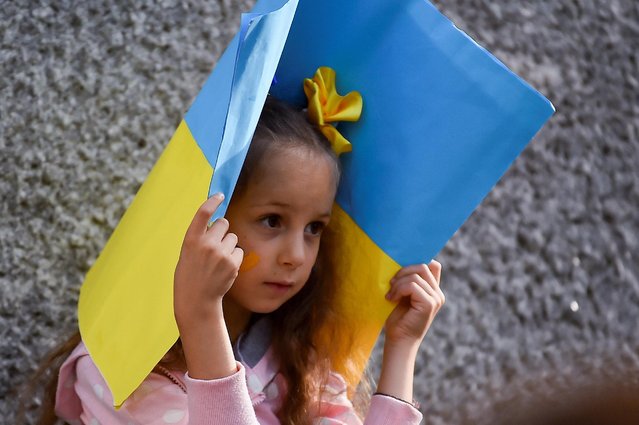 A girl looks on as protesters demonstrate against Russia's invasion of Ukraine, during a Ukrainian Independence Day rally, in Dublin, Ireland on August 24, 2022. (Photo by Clodagh Kilcoyne /Reuters) 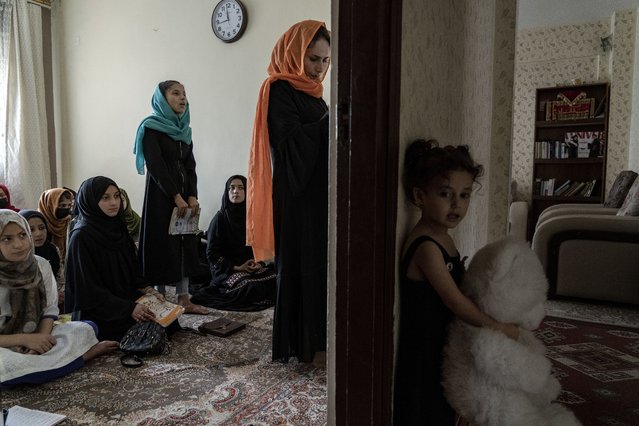 Afghan girls attend a class in an underground school, in Kabul, Afghanistan, Saturday, July 30, 2022. For most teenage girls in Afghanistan, it‚Äôs been a year since they set foot in a classroom. With no sign the ruling Taliban will allow them back to school, some girls and parents are trying to find ways to keep education from stalling for a generation of young women. (Photo by Ebrahim Noroozi/AP Photo) 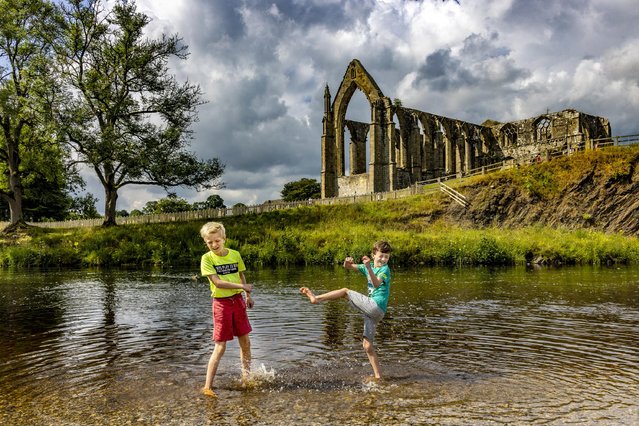 Brothers Daniel and Vincent van der Noort, from the Netherlands, play at Bolton Abbey, North Yorkshire, while on holiday on July 26, 2022. (Photo by James Glossop/The Times) 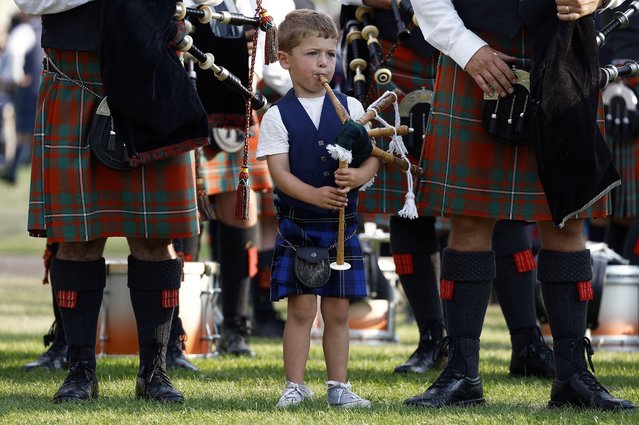 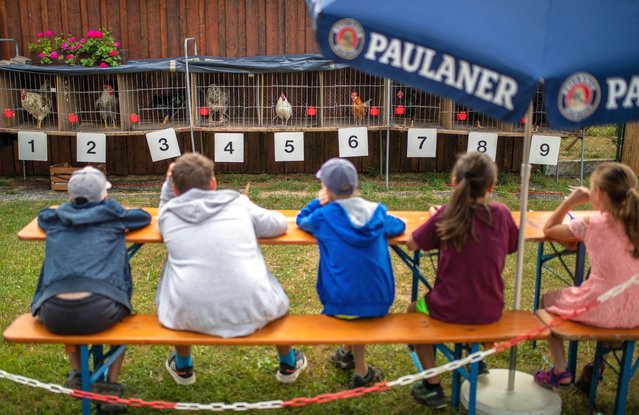 Under the eyes of the jury, roosters compete in the Hussenhof cock crowing competition in Baden-Wuerttemberg on July 31, 2022. In the competition, the roosters of the small animal breeders have ten minutes to crow as often as possible – the jury, i.e. the children, count the individual crowers of their assigned animals. (Photo by Christoph Schmidt/Avalon) 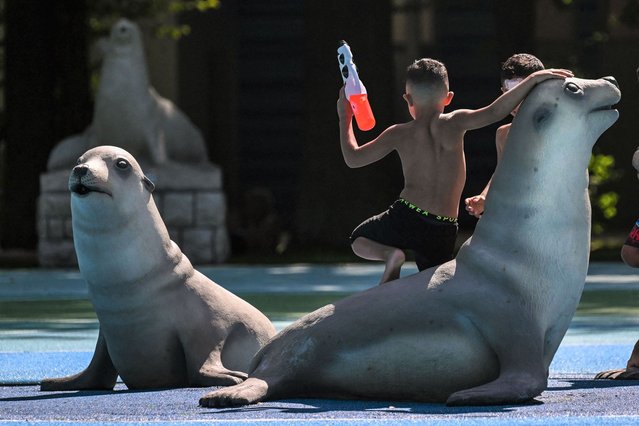 Children play around fountains in form of seals at a water playground at the Plaenterwald Park in Berlin on August 2, 2022. (Photo by Ina Fassbender/AFP Photo) 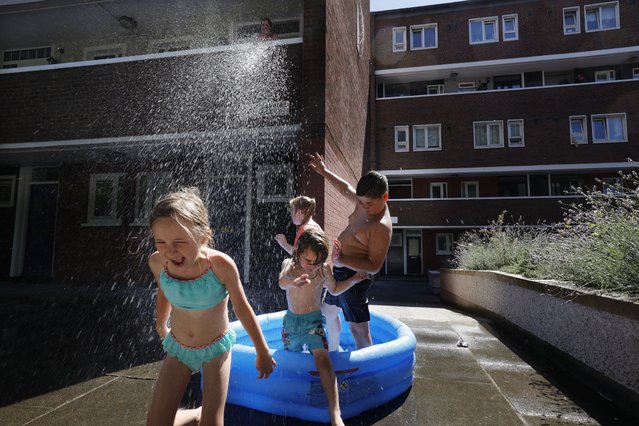 Jade Hanlon pours water from a balcony for the kids at O’Carroll Villas on Cuff Street in Dublin on August 10, 2022 as Ireland experiences a summer heatwave. (Photo by Alan Betson/The Irish Times) 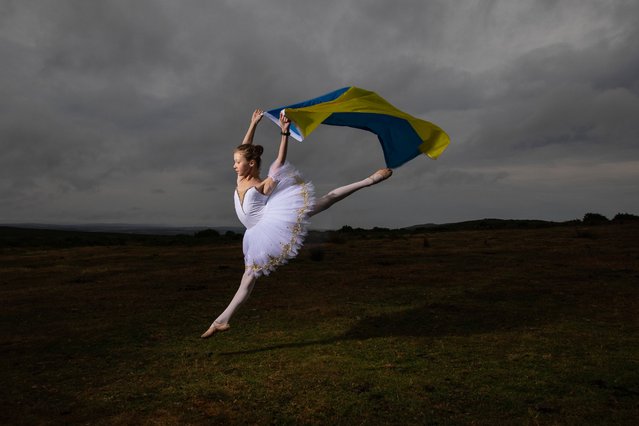 Accompanied with the colours of Ukrainian flag, Kateryna Andrushyna, aged 12, proudly wear and wave the flag in Swansea, United Kingdom on August 22, 2022 for Ukraine Independence Day, which is held on the 24th August. (Photo by Joann Randles/Cover Images) 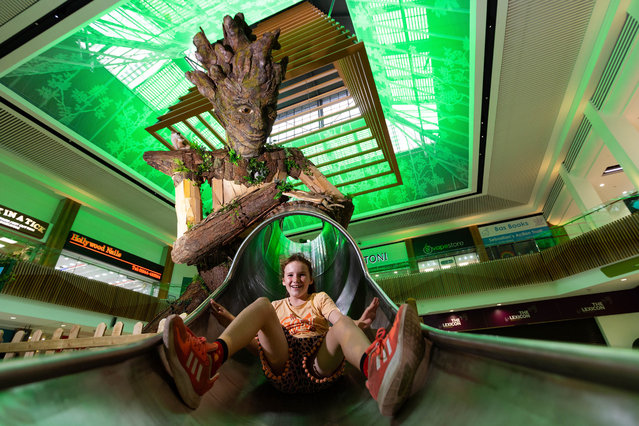 Annabel Pits, 10, plays on August 24, 2022 on “Will Wildwood”, one of the new interactive tree giants unveiled at The Lexicon Shopping Centre in Bracknell, UK. (Photo by David Parry/PA Wire) 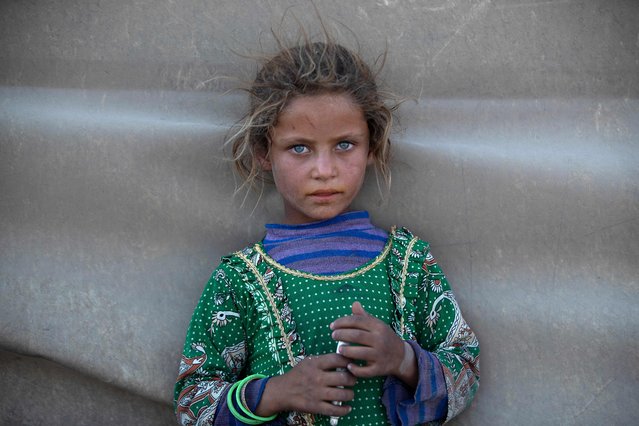 A girl stands at a camp for Syrians displaced by conflict near the Syrian northern city of Raqa on August 2, 2022. (Photo by Delil Souleiman/AFP Photo) 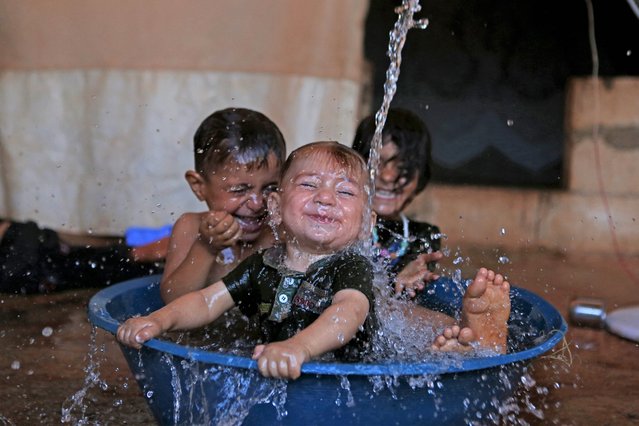 Children play in a makeshift pool in the back of a pick-up truck amid soaring temperatures, in a camp for the internally displaced near the Syrian village of Killi in the rebel-held northwestern province of Idlib, on July 31, 2022. (Photo by Aaref Watad/AFP Photo) 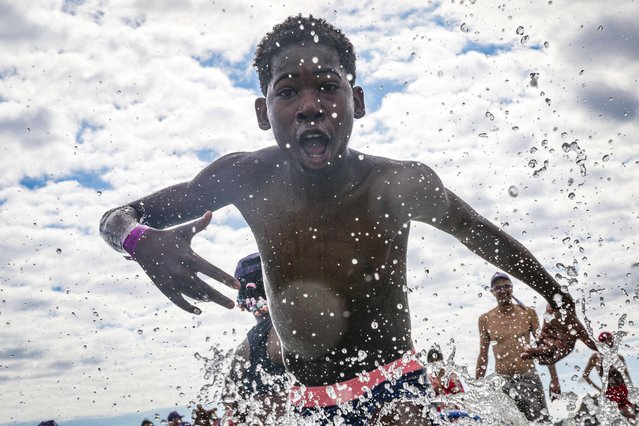 A boy plays in the ocean on the beach of Deauville, northwestern France, on August 24, 2022, as part of the “Days of the Forgotten of the Holidays” campaign organised by French NGO Secours Populaire. Some 5000 children from the Ile-de-France region whose families are unable to afford to go on holidays were taken on a trip to Deauville as part of the Secours Populaire's initiave. (Photo by Lou Benoist/AFP Photo) 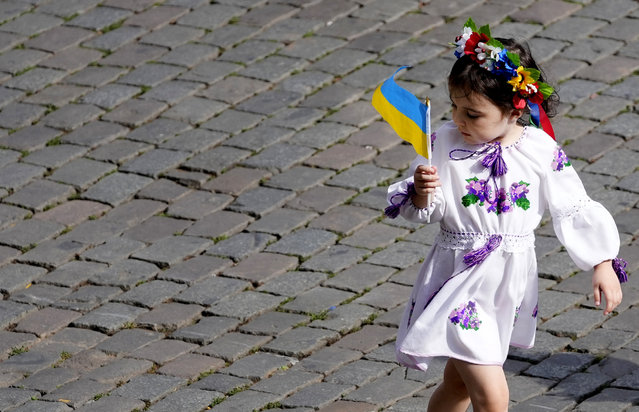 A young girl walks with a Ukrainian flag during an event for Ukrainian Independence Day in the historical Grand Place of Brussels, Wednesday, August 24, 2022. European leaders are pledging unwavering support for Ukraine as the war-torn country marks its Independence Day. The commemorations Wednesday coincide with the six-month milestone of Russia's invasion. (Photo by Virginia Mayo/AP Photo) 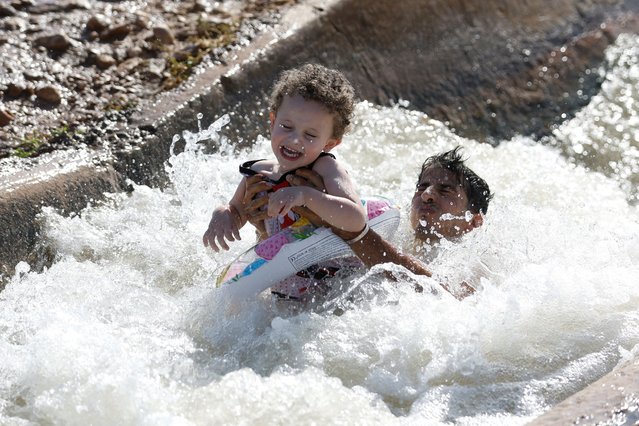 Palestinians cool off during a heat wave, in al-Oja springs near Jericho in the Israeli-Occupied West Bank July 22, 2022. (Photo by Mohamad Torokman/Reuters) 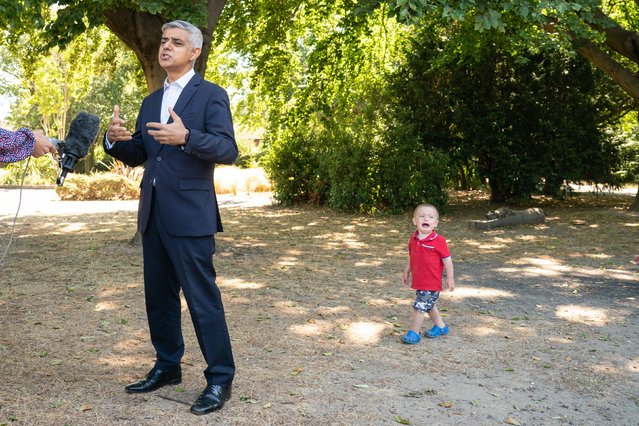 Maxwell Tall, 2, cries as Mayor of London Sadiq Khan speaks to the media during a visit to Mums for Lungs community group in South Woodford, London on Friday, July 29, 2022, to coincide with the final day of the ULEZ expansion consultation and the publishing of new air quality data. (Photo by Dominic Lipinski/PA Images via Getty Images) 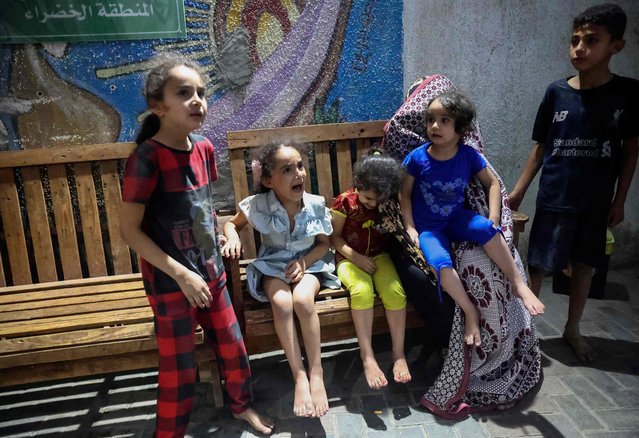 Palestinian children react as they wait outside a hospital following a reported Israeli strike in Rafah in the southern Gaza Strip, late on August 6, 2022. (Photo by Said Khatib/AFP Photo) 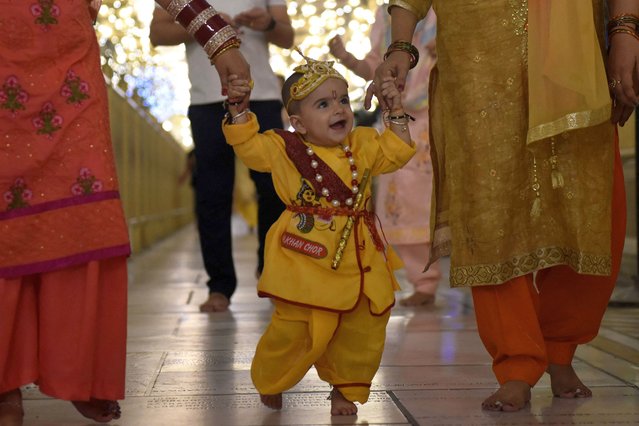 A child dressed as Hindu god Krishna walks along with his parents at the Durgiana Temple on the eve of 'Janmashtami' festival, marking the birth of Lord Krishna, in Amritsar on August 18, 2022. (Photo by Narinder Nanu/AFP Photo) 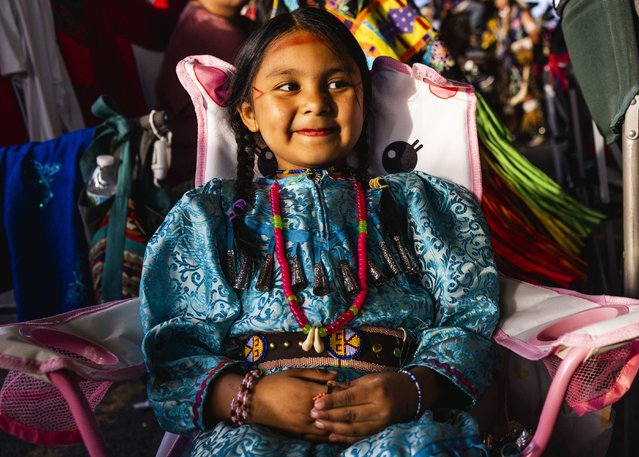