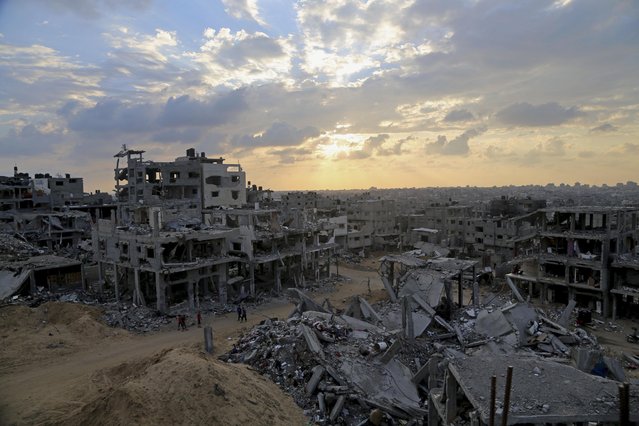 In this October 12, 2014 file photo, Palestinians walk between the rubble of a destroyed building in Shijaiyah neighborhood of Gaza City in the northern Gaza Strip. (Photo by Adel Hana/AP Photo) 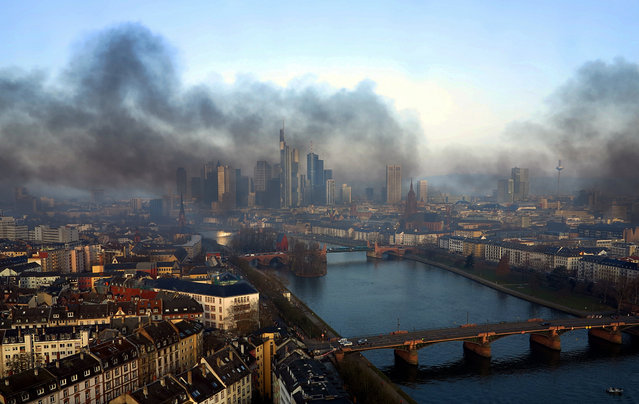 A handout picture made available by www.mainhattan-webcam.de shows black smoke billowing over the skyline of the financial metropolis of Frankfurt, Germany, 18 March 2015. German authorities arrested about 300 people in Frankfurt amid violent anti-austerity protests at the opening of a new headquarters for the European Central Bank (ECB), police said. (Photo by EPA/Mainhattan-Webcam.de) 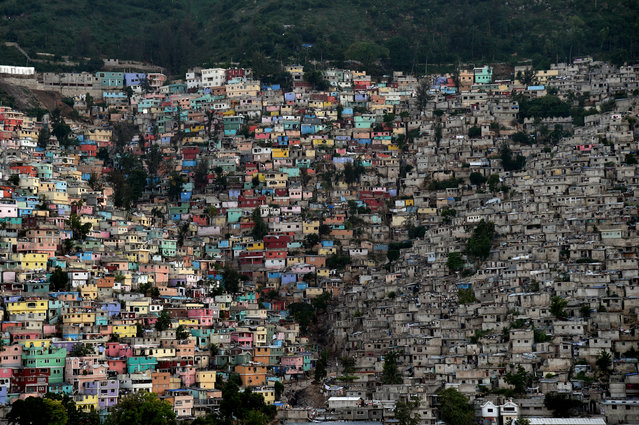 The neighborhoods of Jalousie (L), Philippeaux (C) and Desermites (R) in the commune of Petion Ville, Port au-Prince are pictured on October 26, 2015. (Photo by Hector Retamal/AFP Photo) 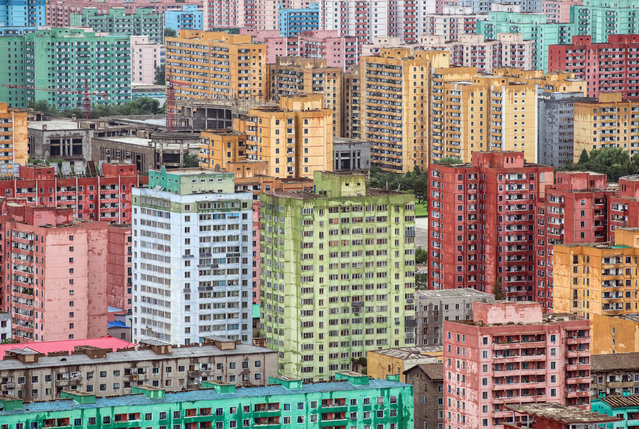 Apartment blocks are pictured from the viewing platform of the Juche Tower on August 24, 2018 in Pyongyang, North Korea. Despite ongoing international negotiations aimed at easing tensions on the Korean peninsula, the Democratic People's Republic of Korea remains the most isolated and secretive nation on earth. Since it's formation in 1948 the country has been led by the Kim dynasty, a three-generation lineage of North Korean leadership descended from the country's first leader, Kim Il-sung followed by Kim Jong-il and grandson and current leader, Kim Jong-un. Although major hostilities ceased with the signing of the Armistice in 1953, the two Koreas have remained technically at war and the demilitarised zone along the border continues to be the most fortified border in the world. (Photo by Carl Court/Getty Images) 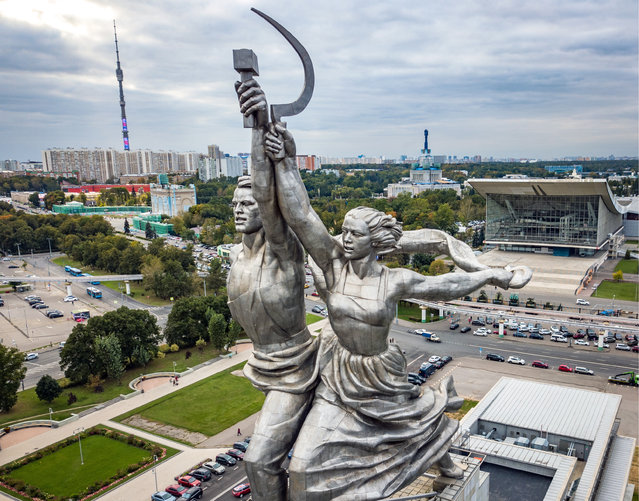 A view of Worker and Kolkhoz Woman, a sculpture by Vera Mukhina, at the main entrance to Moscow's VDNKh exhibition center in Moscow, Russia on September 27, 2017. (Photo by Dmitry Serebryakov/TASS/Barcroft Images) 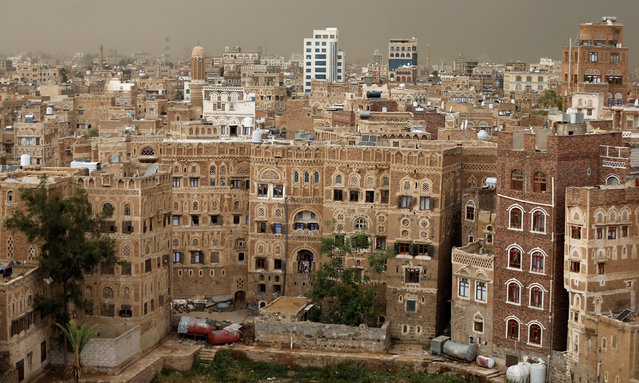 A view of the old quarter of Sanaa, Yemen on August 6, 2018. (Photo by Khaled Abdullah/Reuters) 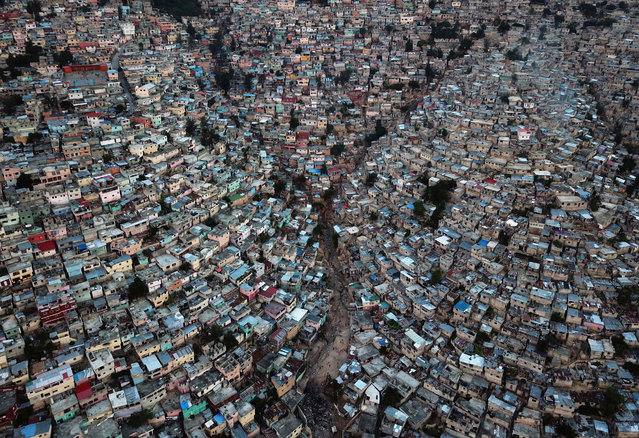 An aerial picture taken on September 27, 2018 shows Jalousie neighborhood in the commune of Petion Ville during the sunset, in the Haitian capital Port-au-Prince. (Photo by Hector Retamal/AFP Photo) 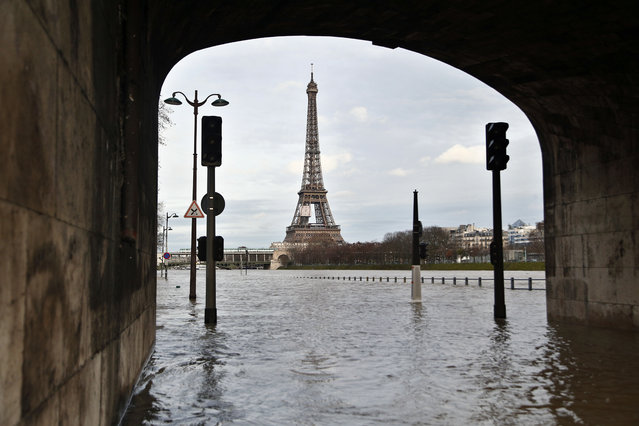 View of the flooded banks of the river Seine in front of the Eiffel tower in Paris, Wednesday, January 24, 2018. The Seine River has overflowed its banks in Paris, prompting authorities to close several roads and cancel boat cruises as water levels rose at least 3.3 meters (nearly 11 feet) above the normal level. (Photo by Thibault Camus/AP Photo) 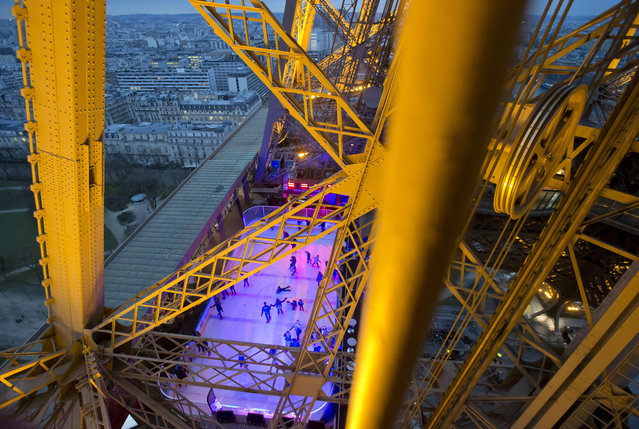 In this February 19, 2017 file photo, people skate on the ice rink set at 57 meters (188 feet) above the ground on the Eiffel Tower in Paris. Tourism to Paris is showing signs of revival after a yearlong slump attributed to deadly extremist attacks, violent labor protests, strikes and floods, according to figures released Tuesday Feb. 21, 2017. (Photo by Michel Euler/AP Photo) 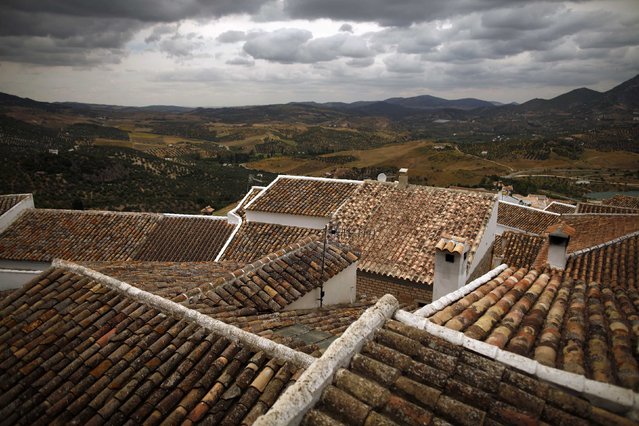 The tiled roofs of houses are seen in Zahara de la Sierra, southern Spain, on June 22, 2014. (Photo by Jon Nazca/Reuters) 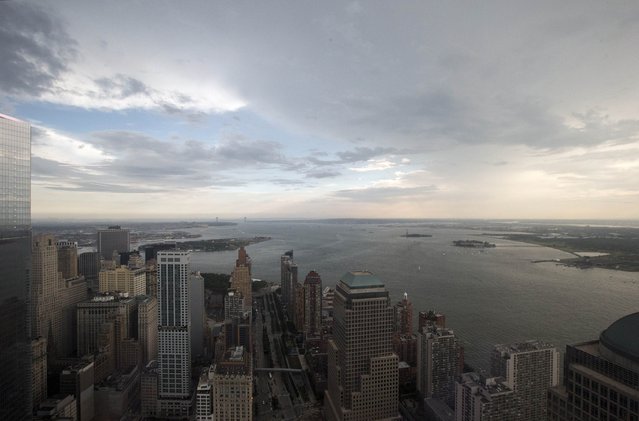 Lower Manhattan and the New York City Harbor are seen from One World Trade Center in New York, on June 25, 2014. (Photo by Brendan Mcdermid/Reuters) 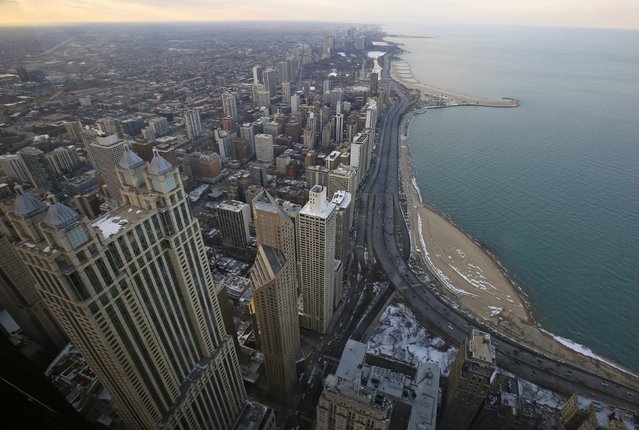 A general view of the city of Chicago is shown in this March 23, 2014 file photo. (Photo by Jim Young/Reuters) 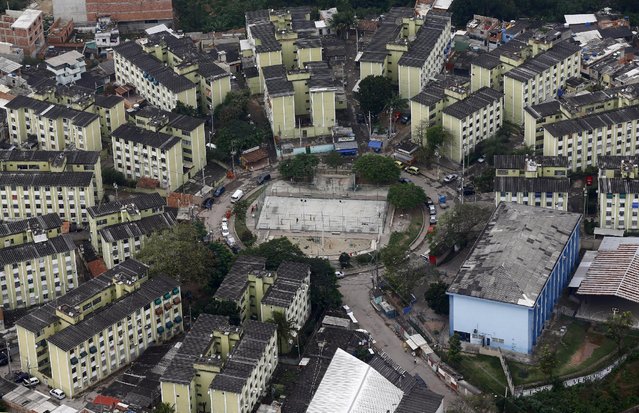 Children play at a concrete soccer pitch in the outskirts of Rio de Janeiro, Brazil July 29, 2015. (Photo by Ricardo Moraes/Reuters) 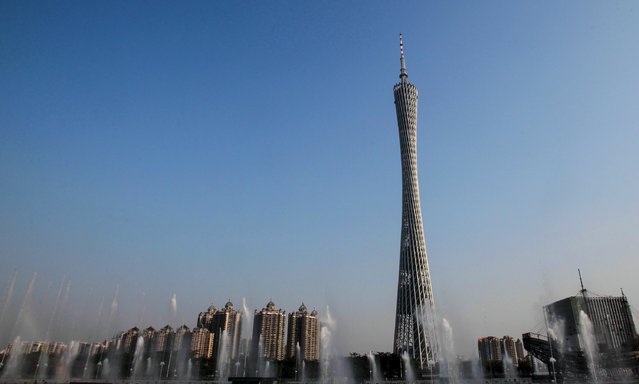 The Canton Tower (top), or Guangzhou TV Tower, and residential buildings are seen behind a fountain in Guangzhou, Guangdong province in this June 18, 2014 file photo. (Photo by Alex Lee/Reuters) 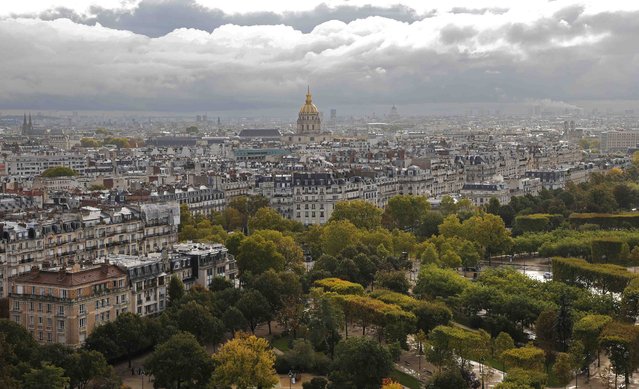 Rain clouds fill the Paris sky in an aerial view which shows the Invalides (C Rear) and the skyline in Paris, France, October 6, 2015. (Photo by Jacky Naegelen/Reuters) 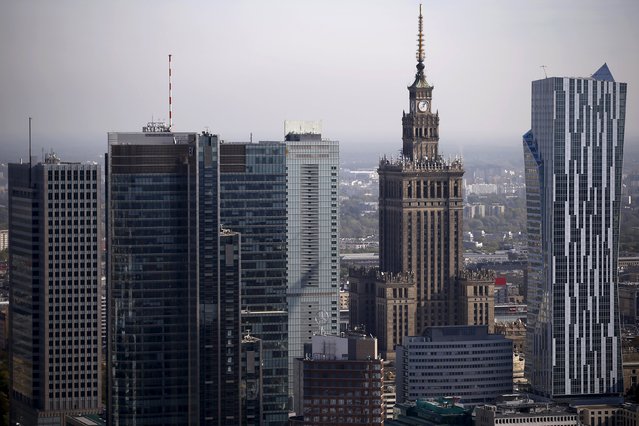 A general view of the cityscape, with the Palace of Culture and Science (2nd R), is pictured from the construction site of a new skyscraper in Warsaw, Poland October 2, 2015. (Photo by Kacper Pempel/Reuters) 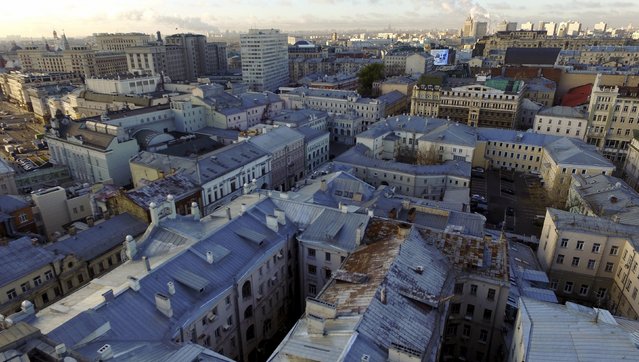 An aerial view shows the skyline of the capital Moscow in Russia, October 29, 2015. (Photo by Andrey Kuzmin/Reuters) 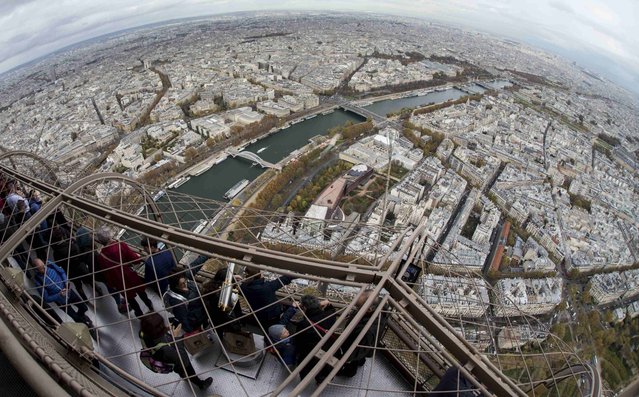 Tourists look over the French capital from the third floor of the Eiffel Tower on an overcast day in Paris, France, November 4, 2015. (Photo by Philippe Wojazer/Reuters) 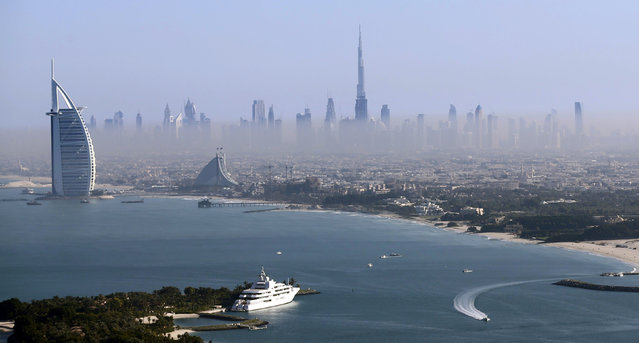 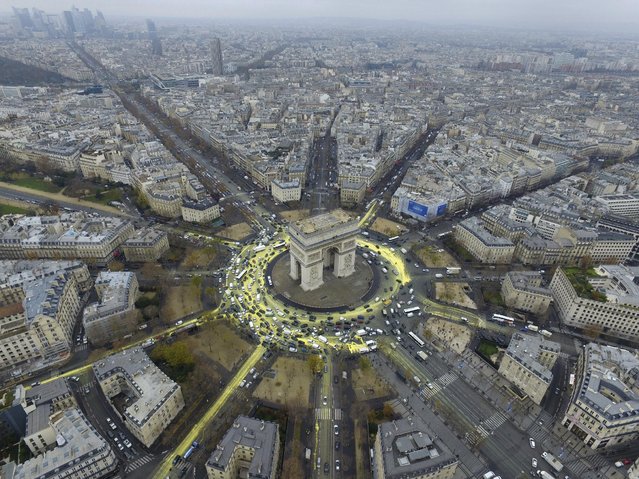 Yellow paint, symbolising the sun and its rays, is seen around the Arc de Triomphe during a protest on Champs Elysees avenue on the sidelines of the World Climate Change Conference 2015 (COP21), in Paris, France, in this handout photo taken and distributed December 11, 2015 by Greenpeace. (Photo by Reuters/Greepeace)
Edit Del
11 Oct 2018 00:03:00, post received 0 comments
Publication archive:
←   →
Popular tags:
All tags
Last searches: