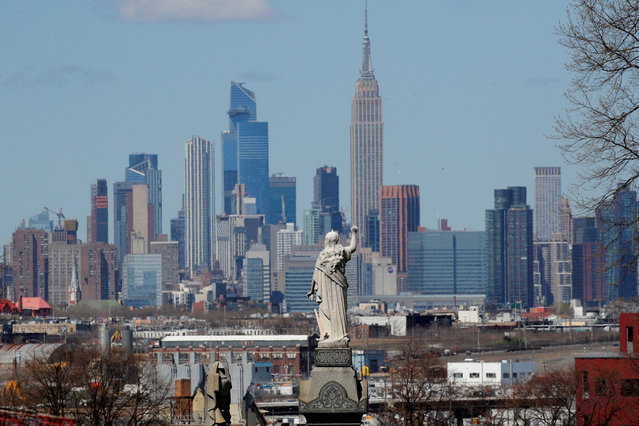 A view of the Manhattan skyline as seen from the Linden Hill Cemetery during the outbreak of the coronavirus disease (COVID-19) in the Brooklyn borough of New York City, New York, U.S., April 6, 2020. (Photo by Brendan Mcdermid/Reuters) 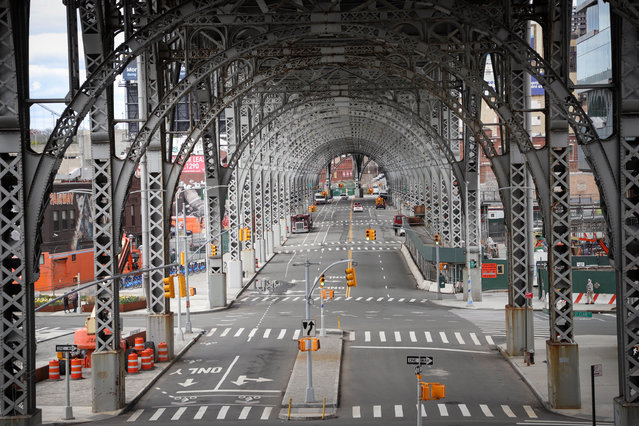 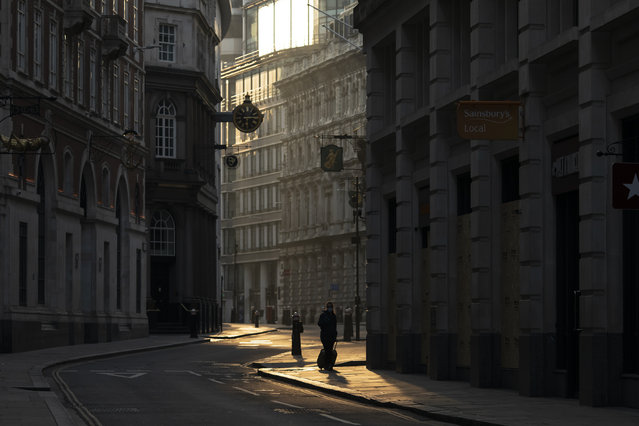 A woman walks through the Square Mile at sunrise on April 10, 2020 in London, England. There have been over 60,000 reported cases of the COVID-19 coronavirus in the United Kingdom and 7,000 deaths. The country is in its third week of lockdown measures aimed at slowing the spread of the virus. (Photo by Dan Kitwood/Getty Images) 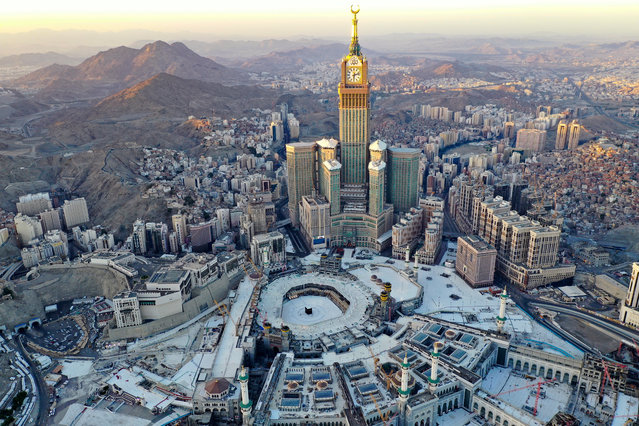 An aerial view shows the Grand Mosque and the Mecca Tower, deserted on the first day of the Muslim fasting month of Ramadan, in the Saudi holy city of Mecca, on April 24, 2020, during the novel coronavirus pandemic crisis. (Photo by Bandar Aldandani/AFP Photo) 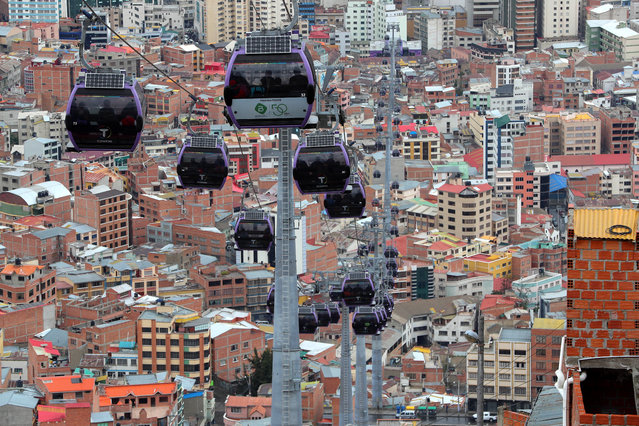 View from the lookout Jacha Kollo during the Alasitas, the traditional fair of miniatures wishes, in La Paz, Bolivia, 30 January 2020. The Mayor's Office of La Paz offers two tours through the streets of the Alasitas, so that Bolivians and foreigners know about this traditional holiday that intends that the Ekeko, its main figure, be recognized as a World Heritage. (Photo by Martin Alipaz/EPA/EFE) 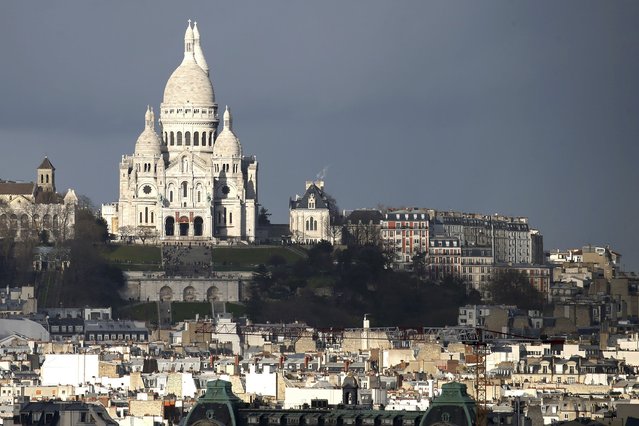 Sunlight strikes the white facade of the Sacre Coeur Basilica on Montmartre in Paris, France, January 14, 2016. (Photo by Charles Platiau/Reuters) 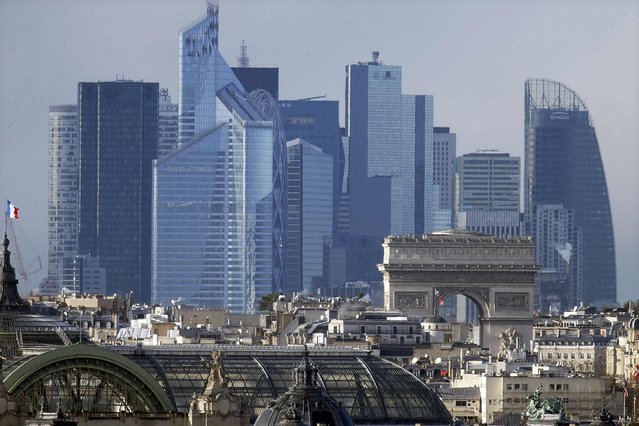 General view of the skyline of La Defense business district behind the Paris landmark and the Arc de Triomphe, in Paris, France, January 14, 2016. (Photo by Charles Platiau/Reuters) 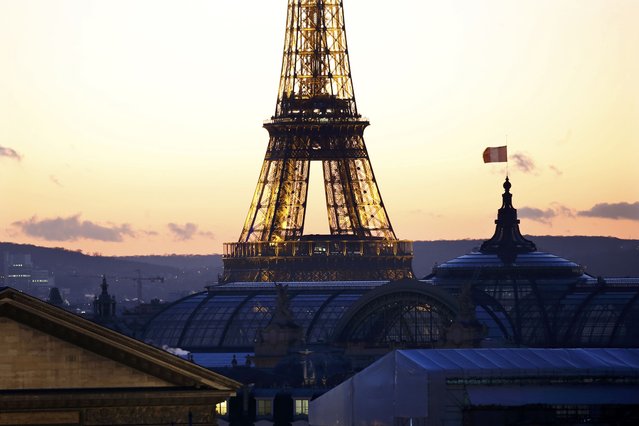 The Eiffel Tower is seen in silhouette at sunset on a winter day in Paris, France, January 15, 2016. (Photo by Charles Platiau/Reuters) 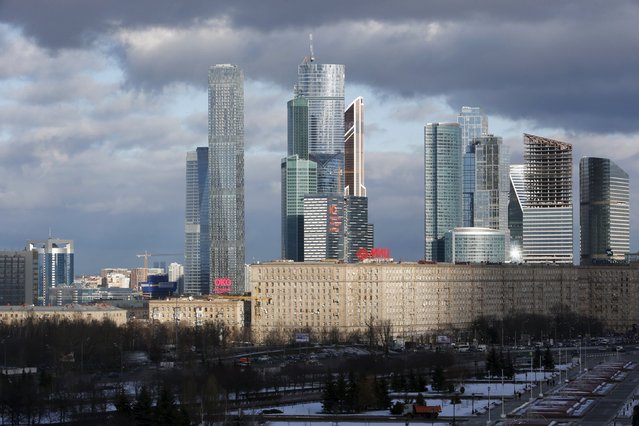 A general view shows residential buildings, with skyscrapers of the Moscow International Business Center, also known as “Moskva-City”, seen in the background, in Moscow, Russia, February 4, 2016. (Photo by Sergei Karpukhin/Reuters) 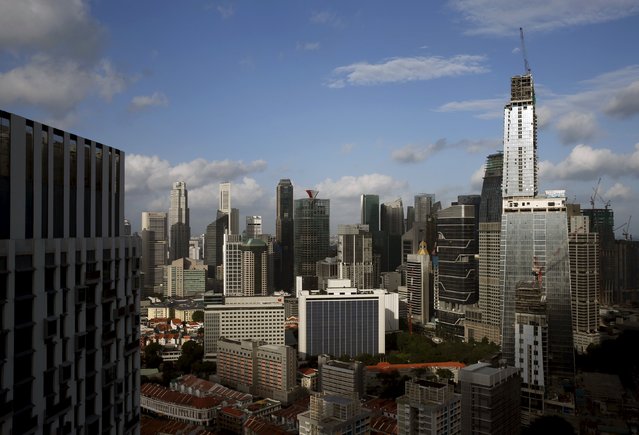 GuocoLand Ltd's mixed-use Tanjong Pagar Centre (R), soon to be the tallest building in the city-state, towers over other buildings in the central business district of Singapore February 29, 2016. (Photo by Edgar Su/Reuters) 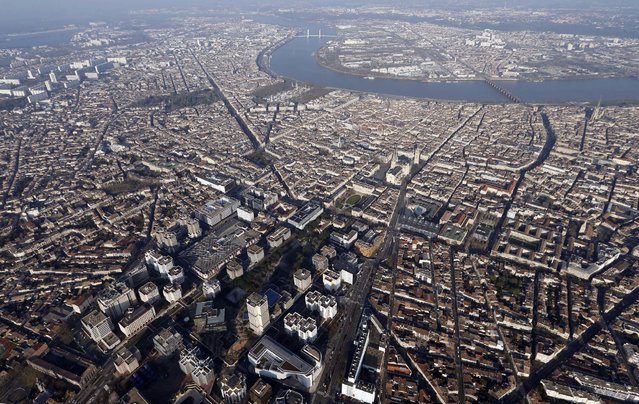 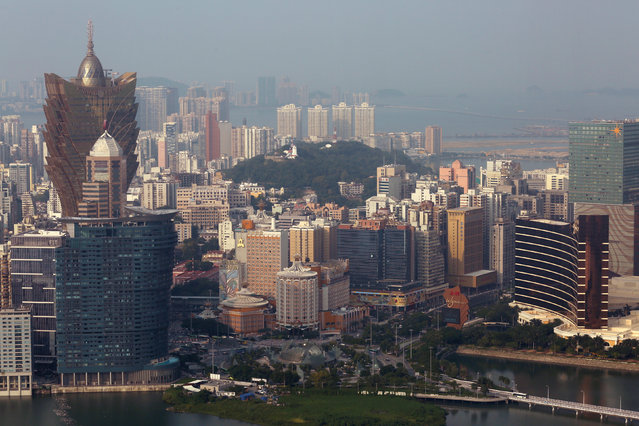 Casinos are seen in a general view of Macau, China October 8, 2015. (Photo by Bobby Yip/Reuters) 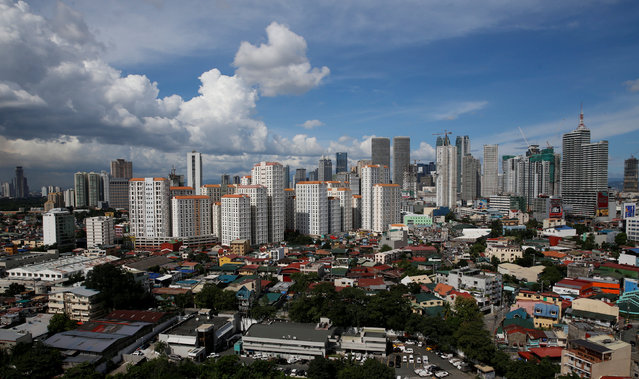 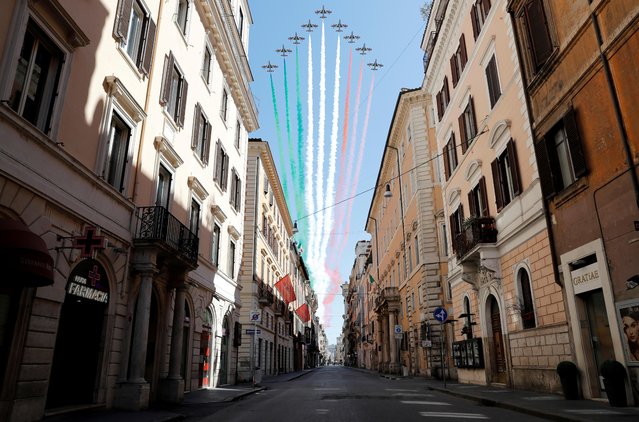 The Frecce Tricolori perform over a deserted Via del Corso on Liberation Day following the outbreak of the coronavirus disease (COVID-19) in Rome, Italy, April 25, 2020. (Photo by Remo Casilli/Reuters) 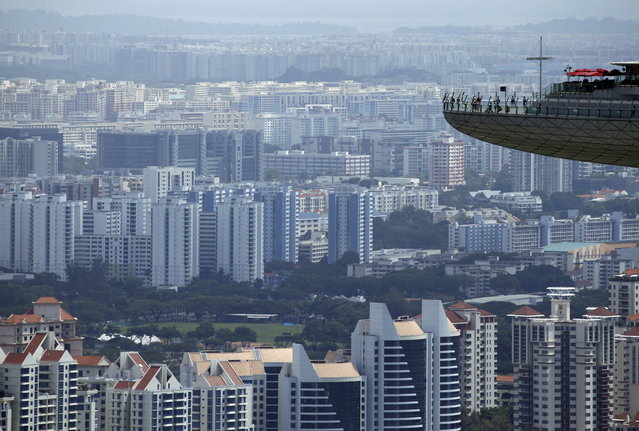 People look out from the observation tower of the Marina Bay Sands amongst public and private residential apartment buildings in Singapore, February 22, 2016. (Photo by Edgar Su/Reuters) 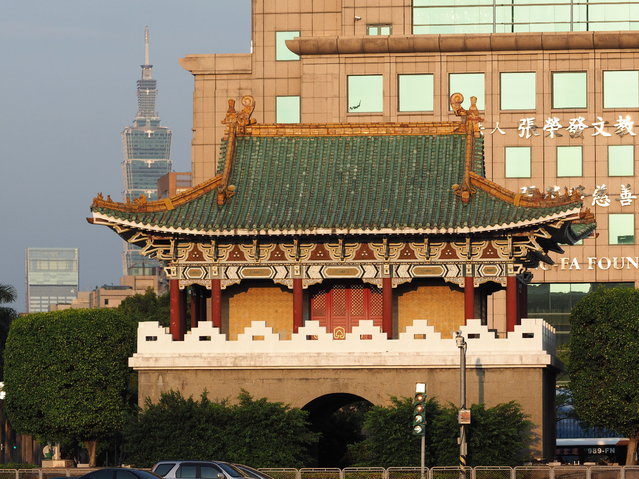 The Taipei 101 skyscraper is partially visible from behind the East Gate of old Taipei city, in Taipei, Taiwan, 29 July 2018. The East Gate was built in 1897 while the Taipei 101 was launched in 2004 as the world's tallest building. Taipei, the capital of Taiwan, has a mixture of Chinese and western culture as well as a mixture of Chinese, Japanese and Western architecture, and attracts mllions of foreign tourists each year. (Photo by David Chang/EPA/EFE) 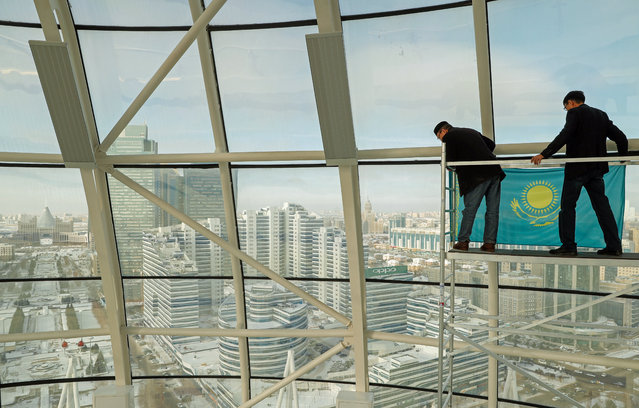 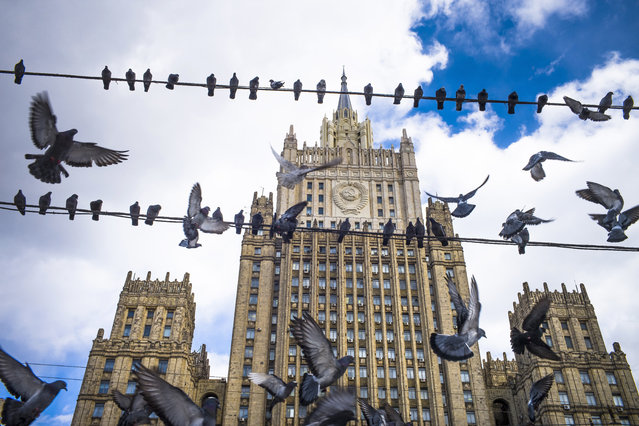 Pigeons take off from wires in front of the Russian Foreign Ministry building, in Moscow, Russia, Thursday, March 29, 2018. (Photo by Alexander Zemlianichenko/AP Photo) 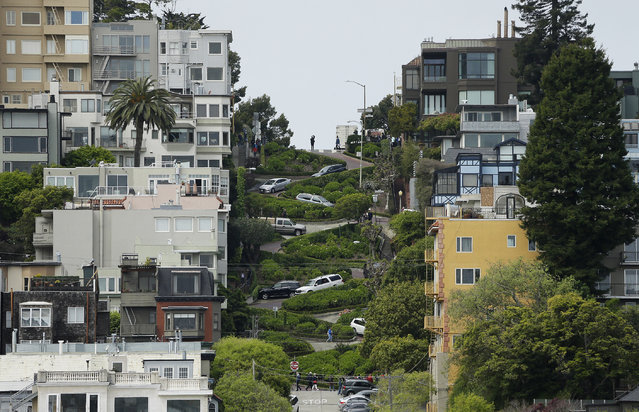 Cars wind their way down Lombard Street in San Francisco, Monday, April 15, 2019. Thousands of tourists may soon have to pay as much as $10 to drive down the world-famous crooked street if a proposal to establish a toll and reservation system becomes law. In the summer months, an estimated 6,000 people a day visit the 600-foot-long street, creating lines of cars that stretch for blocks. (Photo by Eric Risberg/AP Photo) 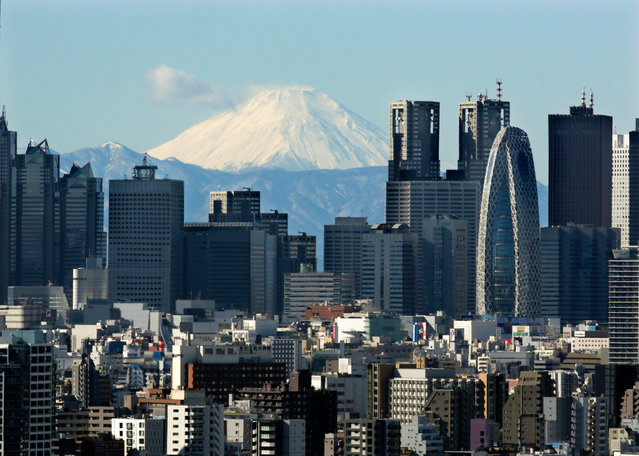