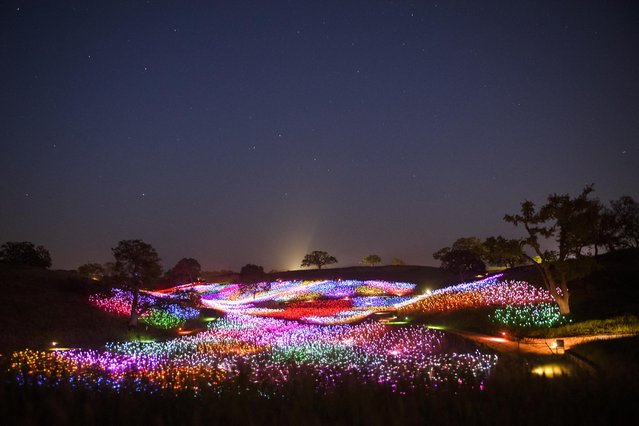 In this long exposure image, fiber-optic lights glow at the Field of Light immersive art installation from artist Bruce Munro, part of the Light at Sensorio on April 13, 2021 in Paso Robles, California. The Light Towers feature 69 towers composed of more than 17,000 wine bottles adjacent to a 15 acre Field of Light at Sensorio which has a solar powered array of over 58,800 stemmed spheres lit by fiber-optics. (Photo by Patrick T. Fallon/AFP Photo) 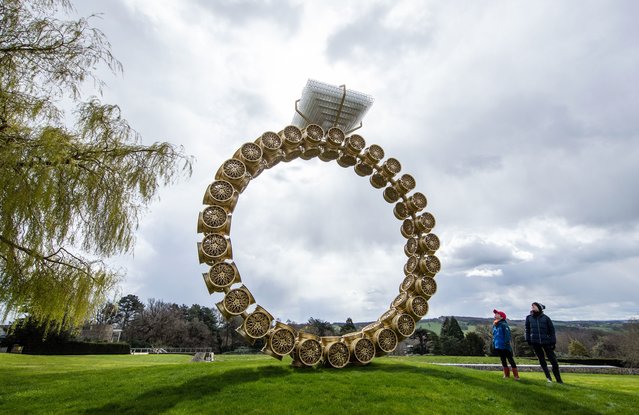 Visitors Max Blyth (left) and Finton Blyth view a work titled “Solitaire” by artist Joana Vasconcelos at the Yorkshire Sculpture Park (YSP) on Tuesday, April 6, 2021. The grounds of the park are open and the YSP is looking forward to welcoming visitors back to other areas as soon as government restrictions allow. (Photo by Danny Lawson/PA Images via Getty Images) 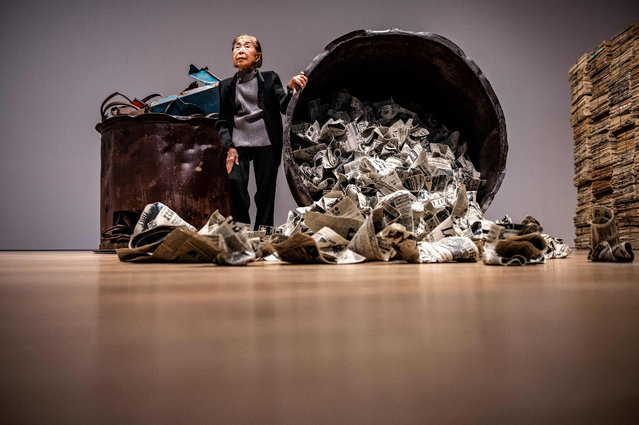 Japanese artist Kimiyo Mishima poses with her “Work 21-A” during a media preview of “Another Energy: Power to Continue Challenging – 16 Women Artists from around the World” at Mori Art Museum in Tokyo on April 21, 2021. (Photo by Philip Fong/AFP Photo) 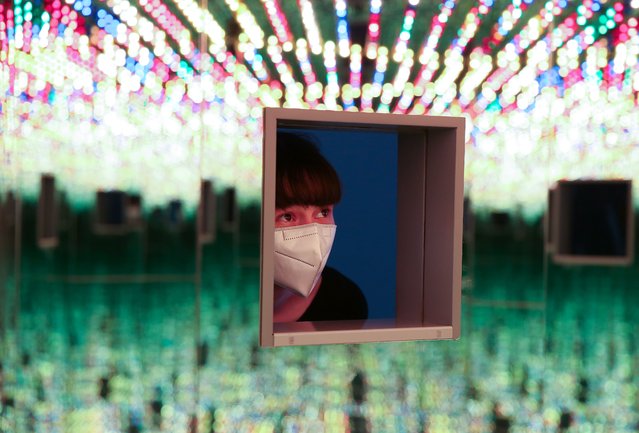 An employee looks into the installation “Kusama's Peep Show or Endless Love Show” by Yayoi Kusama at the “Yayoi Kusama: A Retrospective – A Bouquet of Love I Saw In the Universe” exhibition at Martin Gropius Bau on April 29, 2021 in Berlin, Germany. The exhibition, currently temporarily closed to the general public directly after its opening due to increased regulation during the ongoing coronavirus pandemic, spans seven decades of the creative output of the 92-year-old Japanese visual artist, and runs until August 15. (Photo by Adam Berry/Getty Images) 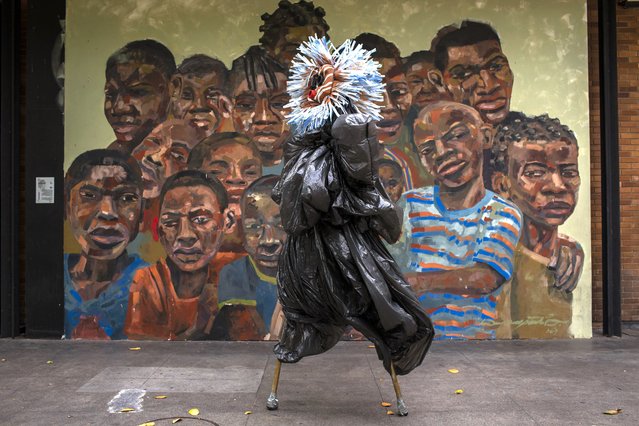 A performing artist balances on stilts dressed in a costume representing ancestral spirits during a video recording of “Giant Dreamers” outside the MAM or Museum of Modern Art (MAM) during the COVID-19 pandemic in Rio de Janeiro, Brazil, Tuesday, March 9, 2021. The show is funded by the government and features artists recreating the magic of Carnival. (Photo by Bruna Prado/AP Photo) 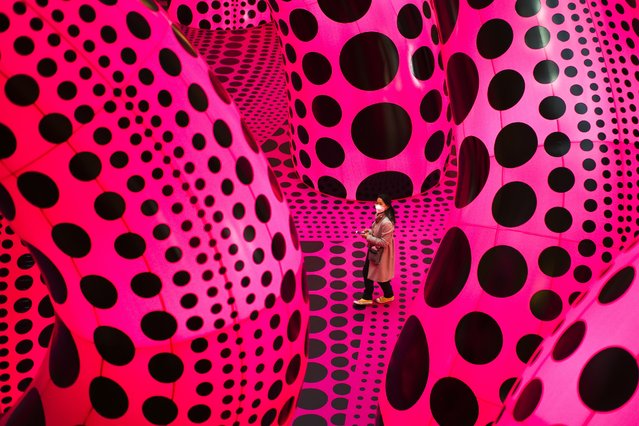 A woman walks through the art work “A Bouquet of Love I Saw in the Universe” by Yayoi Kusama during the press preview of a retrospective exhibition of the Japanese artist at the Martin Gropius Bau museum in Berlin, Germany, Thursday, April 22, 2021. The exhibition will run from April 23 to August 15, 2021. (Photo by Markus Schreiber/AP Photo) 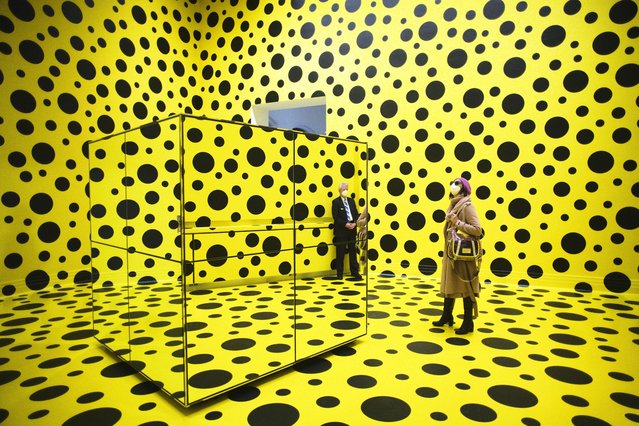 People walk through the art work “THE SPIRITS OF THE PUMPKINS DESCENDED INTO THE HEAVENS” by Yayoi Kusama, during the press preview of a retrospective exhibition of the Japanese artist at the Martin Gropius Bau museum in Berlin, Germany, Thursday, April 22, 2021. (Photo by Markus Schreiber/AP Photo) 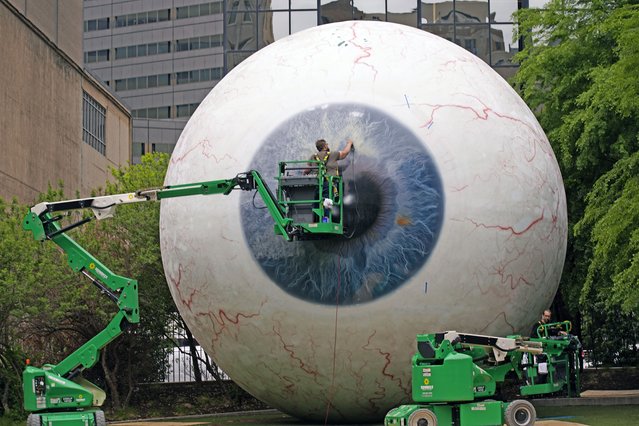 A man who asked to be identified as Worker, works on the artwork call the Eye created by artist Tony Tasset in downtown Dallas, Thursday, April 15, 2021. The 30-foot giant eye had been vandalized and the workers said they were restoring the fiberglass sculpture. (Photo by L.M. Otero/AP Photo) 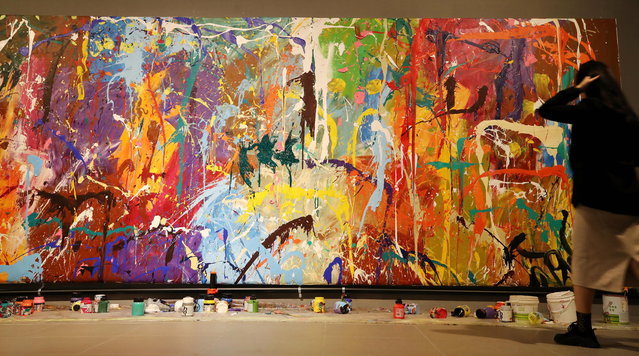 In this March 28, 2021 photo, an artwork from the artist, John Andrew Perello, also known as JonOne, is seen after it found with the brush strokes by a couple, center green color, in Seoul, South Korea. A South Korean exhibition company is trying to persuade an acclaimed American graffiti artist not to restore a $440,000 painting after it was accidentally vandalized by a couple who mistook it for participatory art. The couple told Son's company they thought spectators were meant to participate in JonOne's artwork, “Untitled”, a huge wall painting that was set up with paint cans and brushes scattered around it. The piece wasn't framed due to its large size. (Photo by Lee Jae-hee/Yonhap via AP Photo) 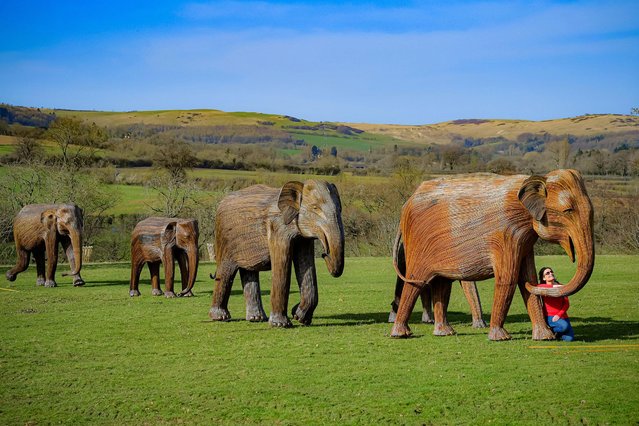 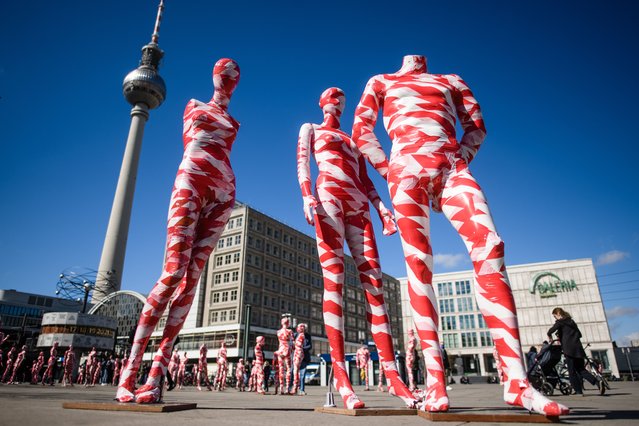 Mannequins wrapped in warning tape, part of the Covid-19 memorial art installation “It is like it is”, stand in front of the TV tower and the world time clock on Alexanderplatz square in Berlin, Germany, 02 April 2021. German artist Dennis Josef Meseg presents display dummies in public places, as former pre-pandemic shopping symbols, wrapped in warning tape symbolizing the restricted life and curtailed basic rights. (Photo by Clemens Bilan/EPA/EFE) 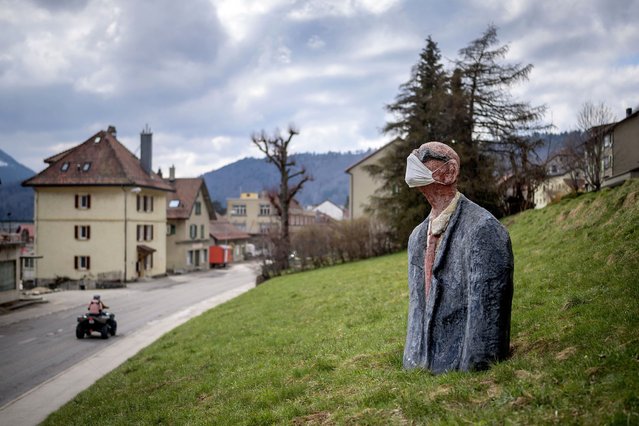 A picture taken on April 18, 2020 in Sainte-Croix shows a scultpure representing a man wearing a facemask as a preventive measure against the Covid-19 coronavirus in a field. (Photo by Fabrice Coffrini/AFP Photo) 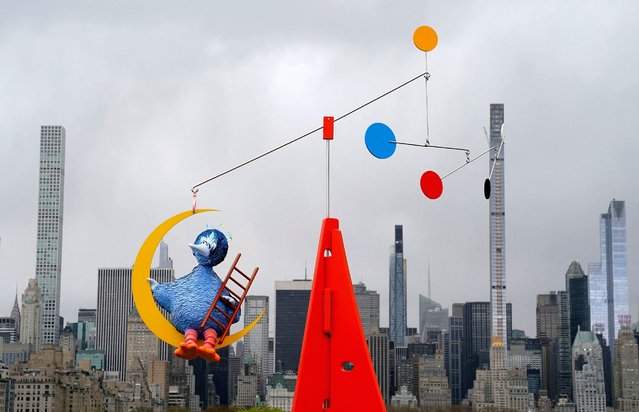 Philadelphia-based artist Alex Da Corte's “As Long as the Sun Lasts” a 26-foot-tall (8-meter) kinetic sculpture featuring the Sesame Street character Big Bird and the modern aesthetic of Alexander Calder's standing mobiles is on display April 16, 2021, for The Met's 2021 Roof Garden Commission. The exhibition at the Iris and B. Gerald Cantor Roof Garden will be on view April 16 through October 31, 2021. (Photo by Timothy A. Clary/AFP Photo) 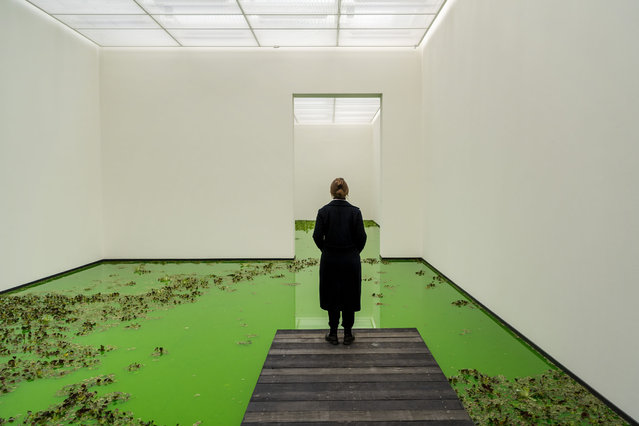 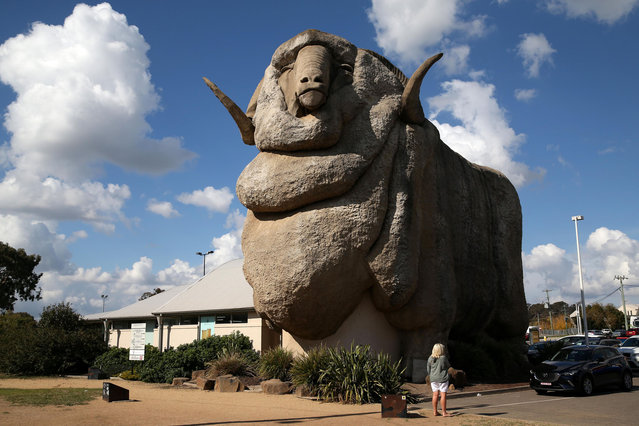