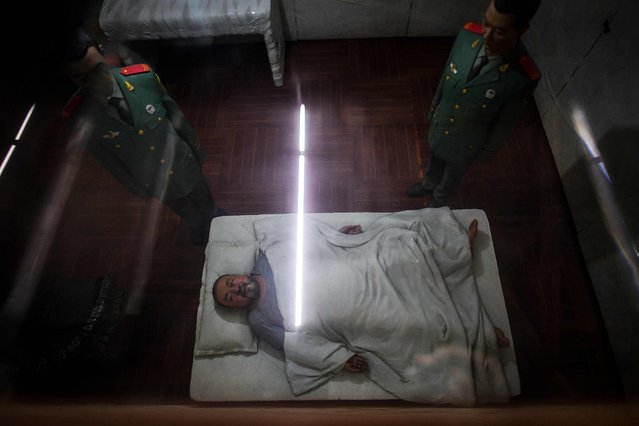 Picture shows an artwork by Chinese artist Ai Weiwei shown at his exhibition “Rapture” at the Cordoaria Nacional exhibition centre in Lisbon on June 3, 2021. A cork statue, a panel of “azulejos” or a roll of marble toilet paper: the Chinese artist Ai Weiwei offers Lisbon an immersion in his universe through his great classics but also new creations to pay tribute to Portugal where he took hold just before the Covid-19 pandemic. (Photo by Patrícia de Melo Moreira/AFP Photo) 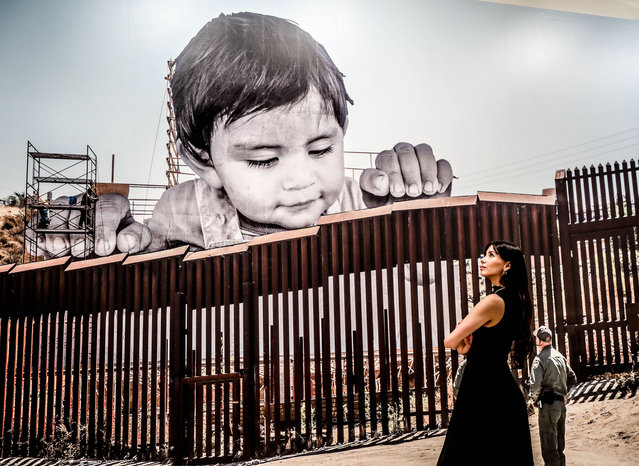 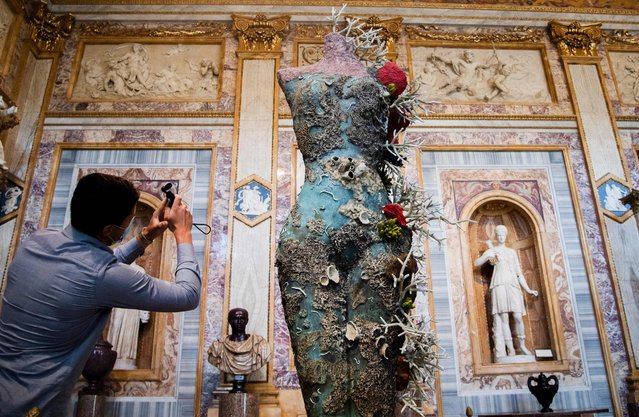 A visitor takes photos of “Grecian Nude” by British artist Damien Hirst, as part of the exhibition “Archaeology Now” at Galleria Borghese in Rome on June 07, 2021. The exhibition, running through June 08 – November 07, 2021, features over 80 works from Hirst’s Treasures from the Wreck of the Unbelievable series, displayed throughout the museum alongside ancient masterpieces. (Photo by Tiziana Fabi/AFP Photo) 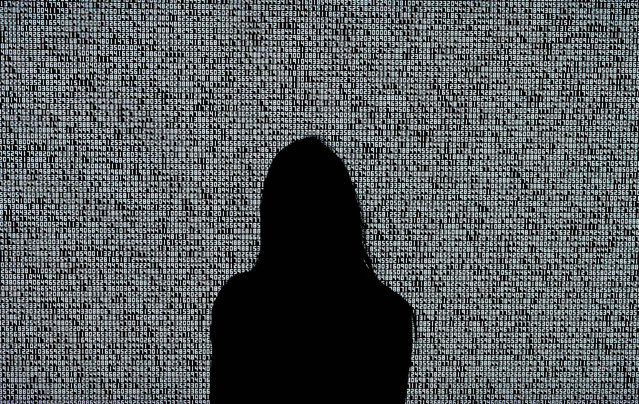 A woman looks at a NFT by Ryoji Ikeda titled “A Single Number That Has 10,000,086 Digits” during a media preview on June 4, 2021, at Sotheby's for the Natively Digital: A Curated NFT Sale Online Auction to take place June 10, 2021. They are technology enthusiasts on the hunt for opportunities in the Wild West market surrounding NFTs: the popular certified digital objects that have spawned a new generation of collectors convinced of their huge potential. (Photo by Timothy A Clary/AFP Photo) 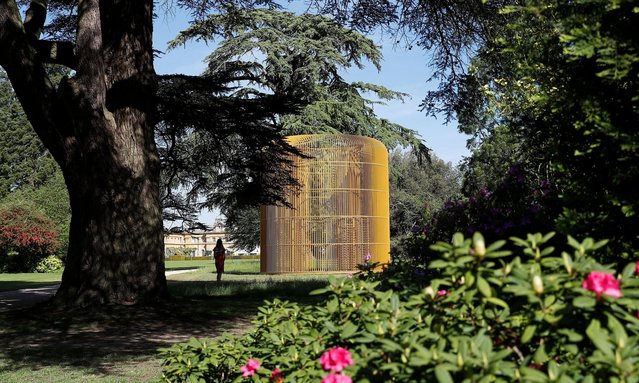 Artist Ai Weiwei's Gilded Cage (2017) sculpture is seen in the grounds of Blenheim Palace after being unveiled by the Blenheim Art Foundation in Woodstock, Britain, June 2, 2021. (Photo by Peter Nicholls/Reuters) 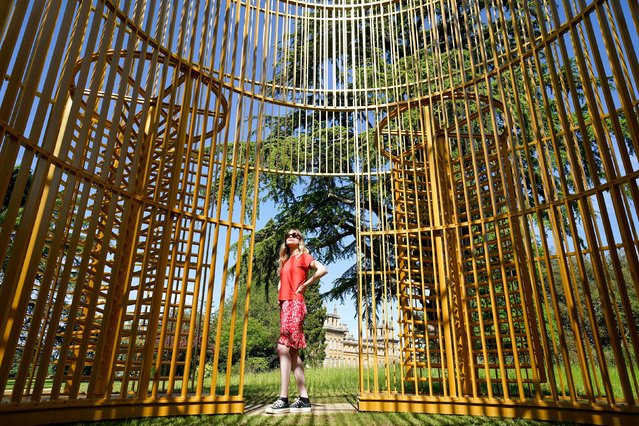 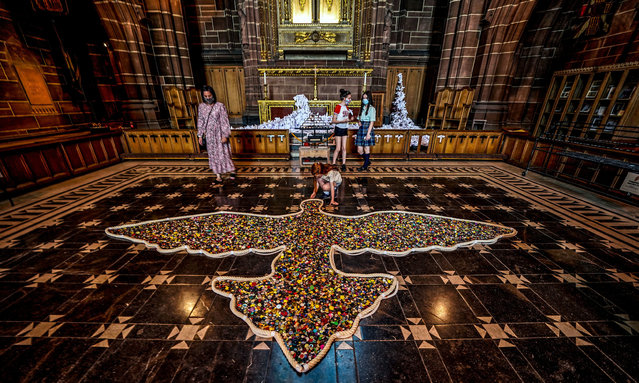 Part of the Peace Doves art installation at Liverpool Cathedral in Liverpool, United Kingdom, visitors are asked to place a button in a dove on the floor in memory of people who have died in the past year. (Photo by Peter Byrne/PA Wire Press Association) 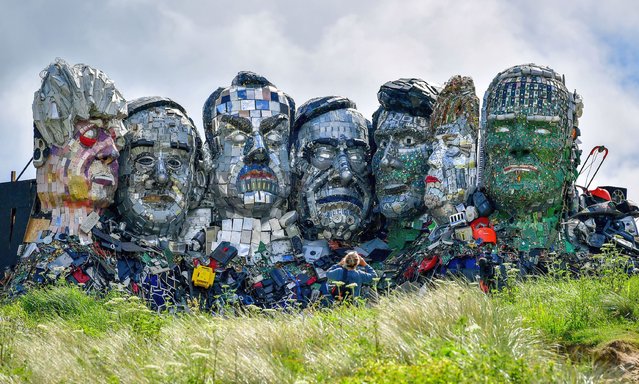 A woman photographs an artwork “Mount Recyclemore”, an artwork depicting the G7 leaders looking towards Carbis Bay, made from electronic waste by artists Joe Rush and Alex Wreckage, ahead of the G7 summit, at Hayle Towans in Cornwall, Britain, June 8, 2021. (Photo by Ben Birchall/PA Images via Getty Images) 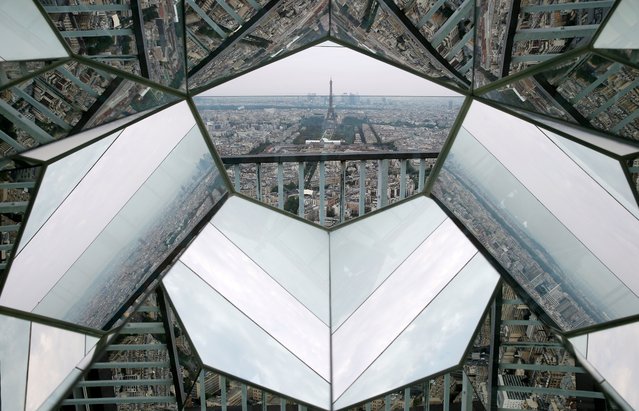 Eiffel Tower is seen through a diamantoscope placed on the rooftop of the Montparnasse Tower on the occasion of the reopening of “L’Observatoire Paris Montparnasse” on June 3, 2021 in Paris, France. Between kaleidoscope and telescope, 4 diamondscopes created by French street artist “Le Diamantaire” offer visitors images where the symmetry is multiplied by optical illusions. (Photo by Chesnot/Getty Images) 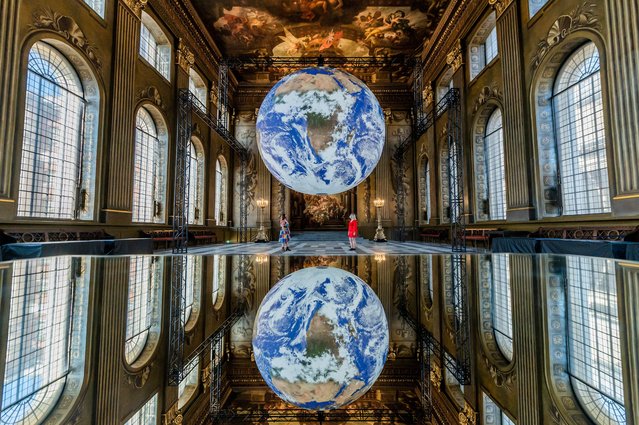 Members of staff pose with Luke Jerram's installation of a giant globe called “Gaia” during a photocall at the Painted Hall in the Royal Naval College in Greenwich, London, Britain, 01 June 2021. The seven metre sculpture is an internally lit replica of the planet Earth using NASA imagery. It rotates and aims at replicating a sense of the “Overview Effect” that astronauts experience when they see our home earth from space. (Photo by Guy Bell/Rex Features/Shutterstock) 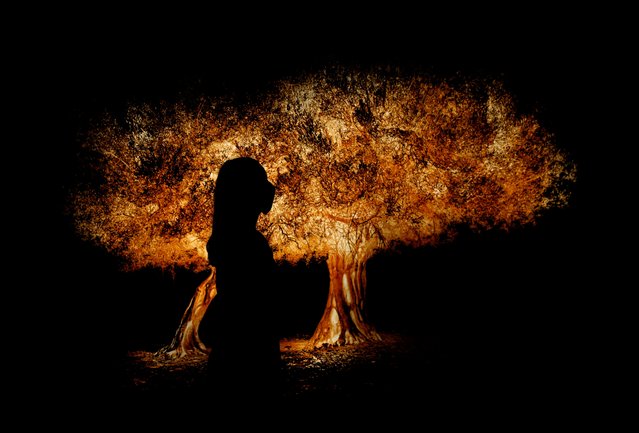 A staff member poses for a photograph in front of the work “Together” by Prince Nikolaos of Greece and Denmark at the London Design Biennale at Somerset House in London, Britain, June 1, 2021. (Photo by John Sibley/Reuters) 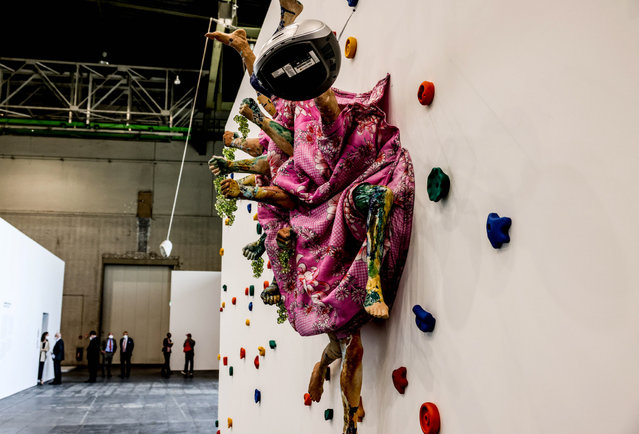 A sculpture by Kris Lemsalu is on display at the exhibition “Diversity United” at the former Tempelhof airport, in Berlin, Germany, 08 June 2021. The exhibition, which is a joint project of the Bonn Foundation for Art and Culture and the renowned Tretyakov Gallery in Moscow 'shows the vitality and diversity of the contemporary European art scene after the fall of the Iron Curtain until today and underlines the importance of intercultural dialogue in times of political uncertainties' as it is described in the exhibition's press release. Works of 90 artists from 34 countries, showcasing the “diversity and vitality of the contemporary European art scene” can be seen from 09 June to 19 September in two hangars of the former inner-city airport. (Photo by Filip Singer/EPA/EFE) 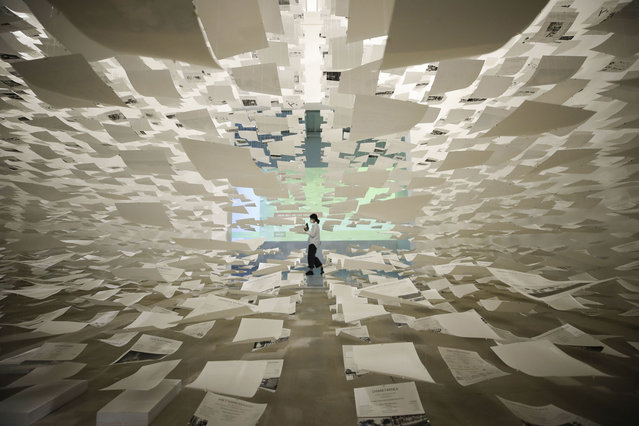 A woman walks past the installation “Uncertainly” in the Spanish Pavillon at the Biennale International Architecture exhibition, in Venice, Italy, during a preview for the media, Wednesday, May 19, 2021. (Photo by Alessandra Tarantino/AP Photo) 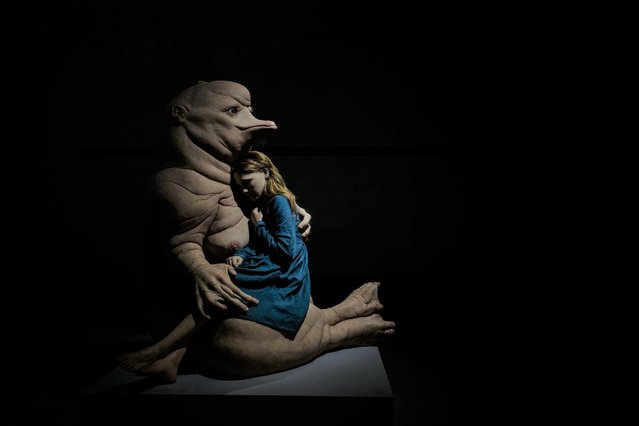 Art work by Patricia Piccinini is seen in one of the rooms at Flinder Street Station on May 26, 2021 in Melbourne, Australia. Australian artist Patricia Piccinini has taken over the entirety of the Flinders Street Station Ballroom as well as 15 other rooms to create a fully immersive, multi-sensory experience as part of Melbourne's new cultural art event RISING. In her first major exhibition in Melbourne in 20 years, Piccinini will create a walkable eco-system of hyper-real silicon sculptures, video, sound and light that will transform the long-shuttered upper level of Australia's oldest train station. (Photo by Darrian Traynor/Getty Images) 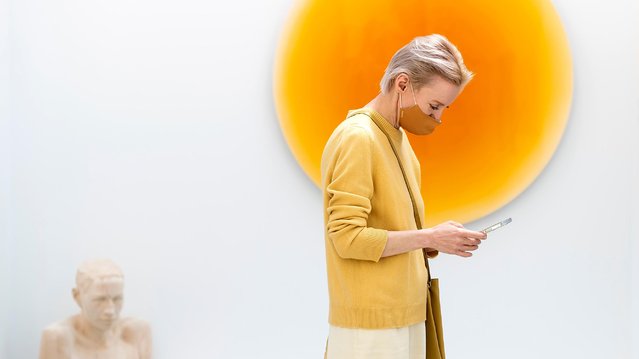 A visitor walks past a painting while looking at her phone during Art Madrid 21 Exhibition on May 26, 2021 in Madrid, Spain. (Photo by Samuel de Roman/Getty Images)
Edit Del
13 Jun 2021 07:32:00, post received 0 comments
Publication archive:
←   →
Popular tags:
All tags
Last searches: