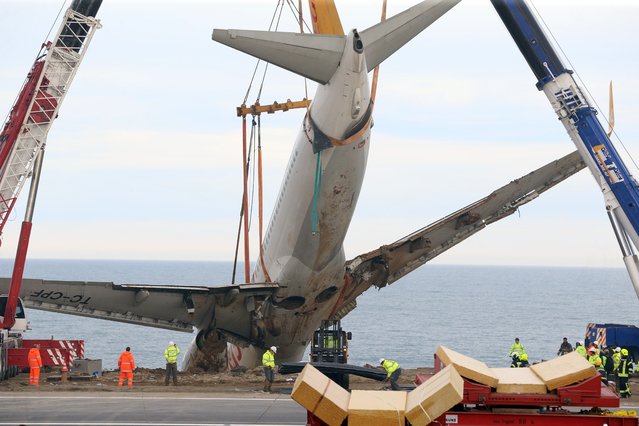 Cranes lift Pegasus airplane which was stucked in mud as it skidded off the runway after landing in Trabzon Airport, Turkey on January 18, 2018. (Photo by Hakan Burak Altunoz/Anadolu Agency/Getty Images) 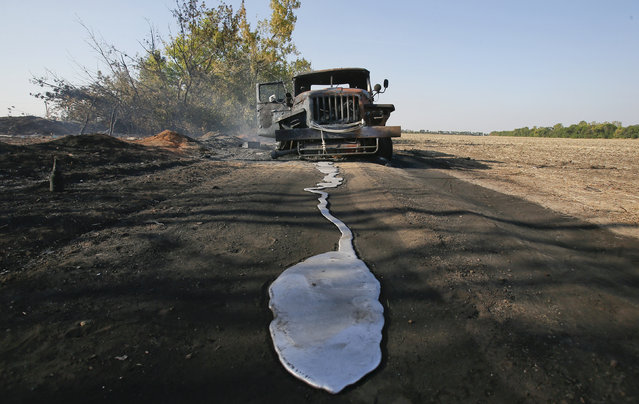 A puddle of melted material is pictured in front of a burnt truck belonging to Ukrainian forces on a road near the village of Berezove, southwest from Donetsk, September 4, 2014. (Photo by Maxim Shemetov/Reuters) 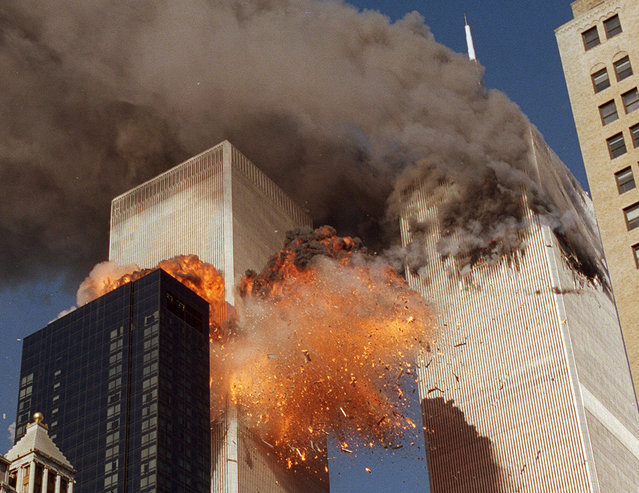 In this September 11, 2001, file photo, smoke billows from one of the towers of the World Trade Center and flames as debris explodes from the second tower in New York. A bill passed by Congress allowing the families of 9/11 victims to sue the Saudi government has reinforced to some in the Arab world a long-held view that the U.S. only demands justice for its own victims of terrorism, despite decades of controversial U.S. interventions around the world. (Photo by Chao Soi Cheong/AP Photo) 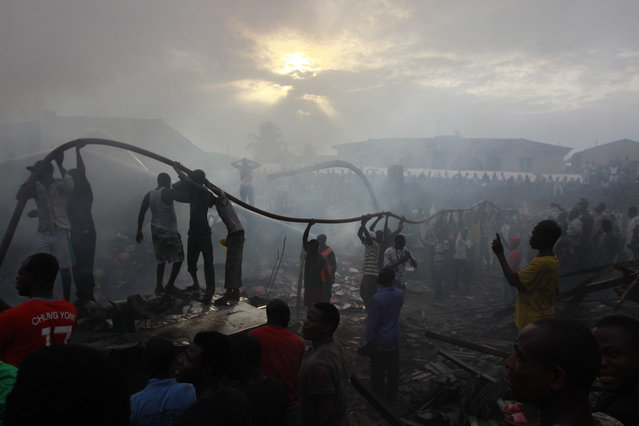 In this Sunday, June 3, 2012 file photo, People gather at the site of a plane crash in Lagos, Nigeria. An investigation into a June 2012 plane crash in Nigeria that killed some 153 people onboard and others on the ground has faulted the aircraft's pilot and raised long-standing questions over aviation safety in Africa's most populous nation. (Photo by Sunday Alamba/AP Photo) 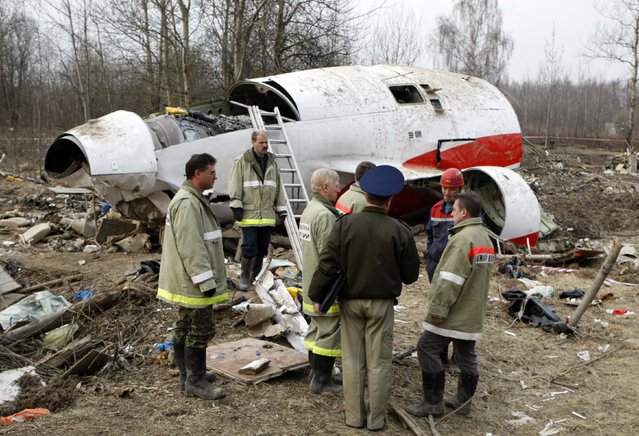 In this April 13, 2010 file photo, emergency ministry workers stand near the wreckage at the site of the plane crash that killed Polish President Lech Kaczynski in Smolensk, western Russia. Poland's government is accusing European Council President Donald Tusk of betraying national interests and bowing to Moscow in the investigation of the 2010 plane crash in Russia that killed Kaczynski and 95 others. (Photo by Mikhail Metzel/AP Photo) 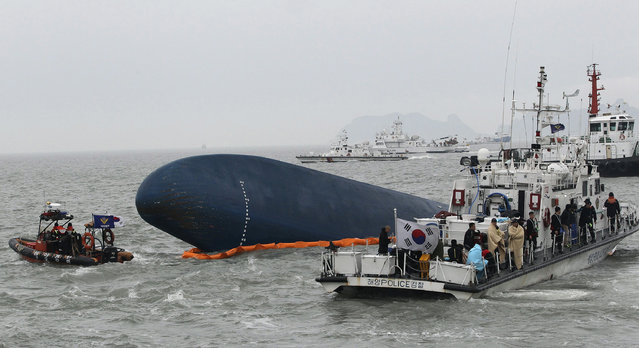 In this April 17, 2014 file photo, South Korean Coast Guard personnel search for missing passengers aboard the sunken South Korean ferry Sewol in the water off Jindo, South Korea. Salvage workers are slowly pulling up the huge, corroded South Korean ferry above the sea surface Thursday, March 23, 2017, about three years after it sank on its routine voyage to a resort island, killing more than 300 people, mostly high school students. (Photo by Ahn Young-joon/AP Photo) 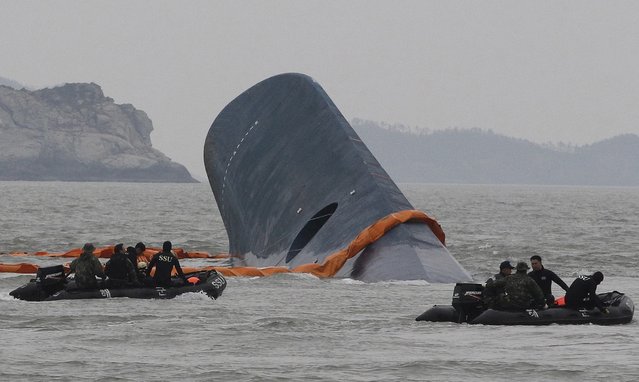 This April 21, 2010, file photo shows a large plume of smoke rising from BP's Deepwater Horizon offshore oil rig in the Gulf of Mexico. The film, “Deepwater Horizon” is stirring mixed emotions for family members of the 11 men who died in the blast. While their reactions to the movie vary, many relatives share a hope that the film will remind people about the disaster's human toll. (Photo by Gerald Herbert/AP Photo) 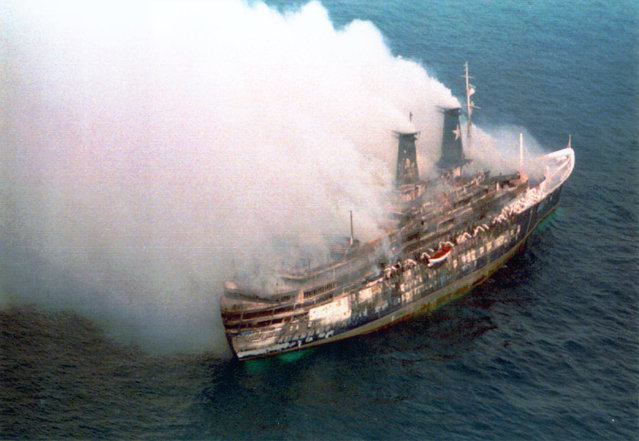 The Italian cruise ship Achille Lauro smokes in the Indian Ocean, some 160 miles off the Somali coast, Thursday, December 01, 1994. The Achille Lauro caught fire, Wednesday, and nearly 1,000 people aboard escaped on lifeboats to be rescued by passing ships. Two people are known to be dead one person is missing. (Photo by Ricardo Mazalan/AP Photo) 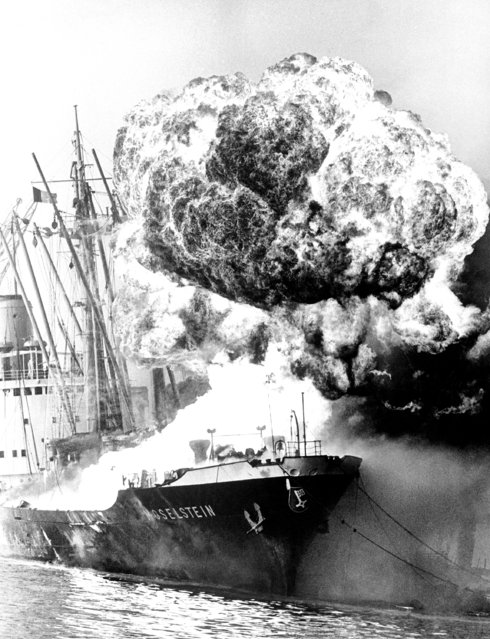 A ball of flames and smoke rises into the air above the German freighter “Moselstein” after a second explosion shook the vessel in Antwerp Harbor, Belgium on December 28, 1966. Flames reached a height of 150 feet, and because of the intense heat and danger of further explosions the fire brigade could only protect adjacent ships. (Photo by AP Photo) 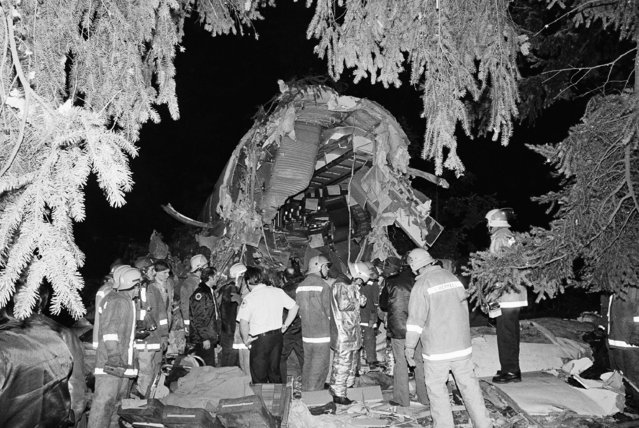 The twisted wreckage of a United Air Lines Dc-8 jetliner lies nestled among some tree in a residential Portland neighborhood Thursday night, December 28, 1978 after it crashed, killing 10 of the 185 persons on board. (Photo by John Storey/AP Photo) 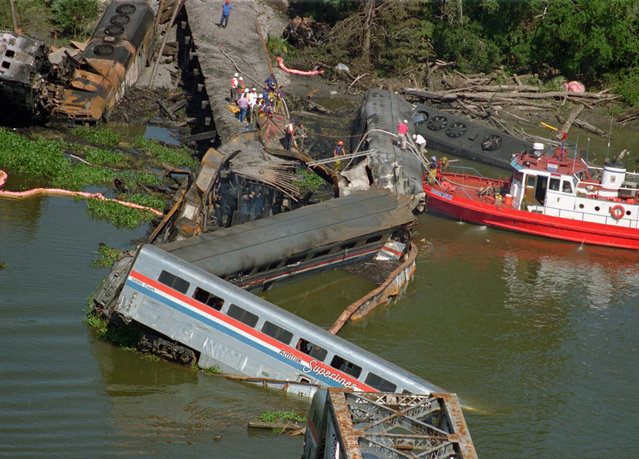 This September 22, 1993, file photo shows the wreckage of the Amtrak Sunset Limited train, north of Mobile, Ala. A barge hit a railroad bridge and minutes later the train hit the bent tracks and plunged into the bayou, killing 47 people and injuring more than 100 others. A string of crashes involving Amtrak trains is rekindling memories for survivors of the passenger service’s 1993 tragedy, its deadliest accident ever. (Photo by Mark Foley/AP Photo) 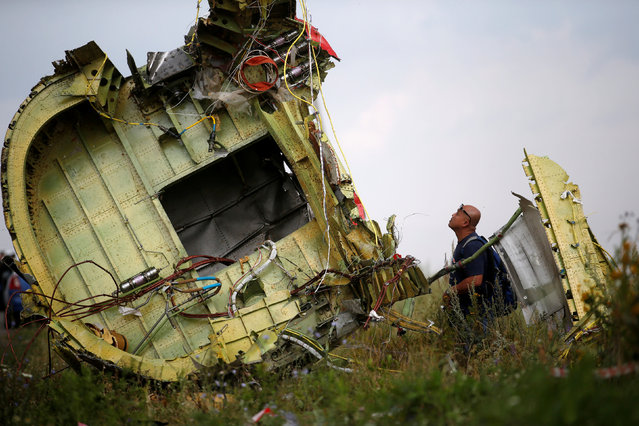 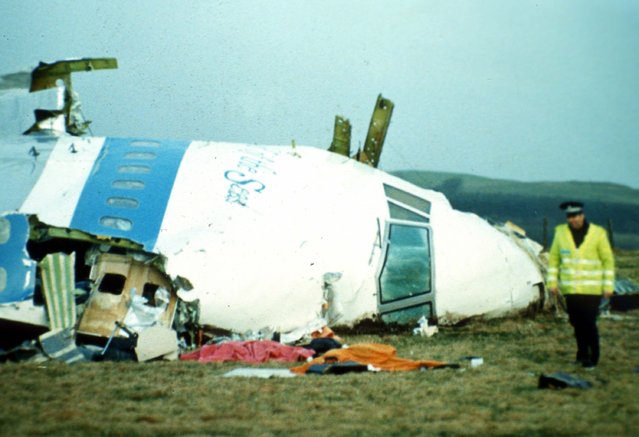 On December 21, 1988, Pan Am Flight 103 from London's Heathrow International Airport to New York's John F. Kennedy International Airport was destroyed and the remains landed in and around the town of Lockerbie, Scotland. Forensic experts determined that plastic explosive had been detonated in the Boeing 747-121 forward cargo hold. The death toll was 270 people from 21 countries, including 11 people in the town of Lockerbie. (Photo by AP Photo) 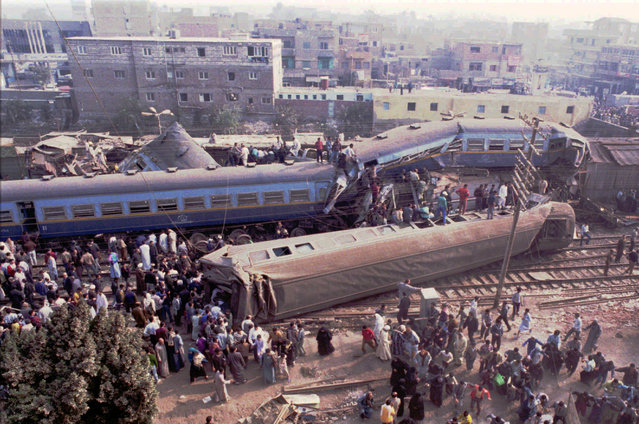 Rescue workers search for bodies from the train wreck in Badrshein 25 miles south of Cairo Thursday, December 21, 1995. Police said at least 75 people were killed and 76 were injured when a train carrying mostly workers slammed into the Cairo-to-Luxor express, which had slowed down because of heavy fog. (Photo by Mohamed El-Dakhakhny/AP Photo) 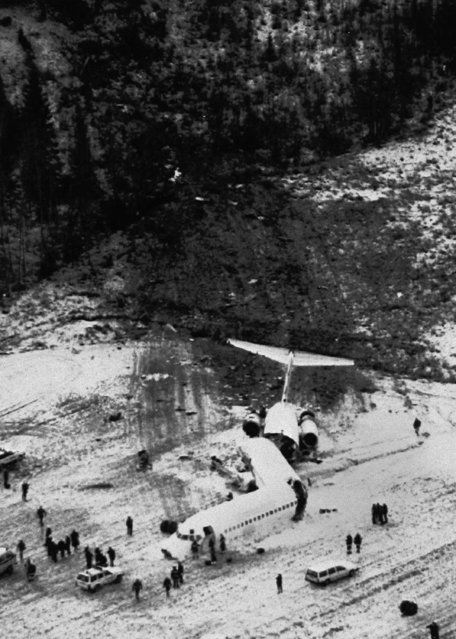 An SAS MD-80 lies broken in three parts on a meadow where it crashed shortly after takeoff from Stockholm's Arlanda airport, December 27, 1991. In a crash landing the Swedish prime minister called “a miracle”, the disabled SAS jetliner with 129 people plunged 2,000 feet into the snowy field injuring at least 42 people but causing no deaths. The airliner's logos were painted over after the crash. (Photo by Borje Thursesson/AP Photo) 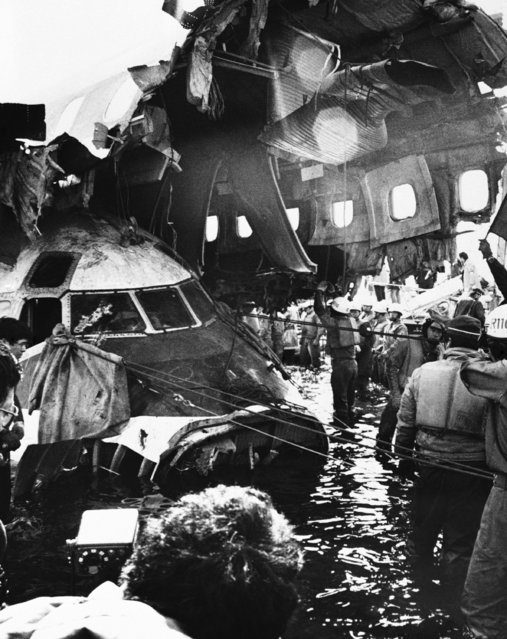 Rescue workers use cables to haul the shattered nose of a Japan Airlines DC-8 away from the body, into which it telescoped on impact in the shallows of Tokyo Bay short of the Haneda Airport runway, February 9, 1982. Crash took the lives of at least 22 passengers. (Photo by AP Photo) 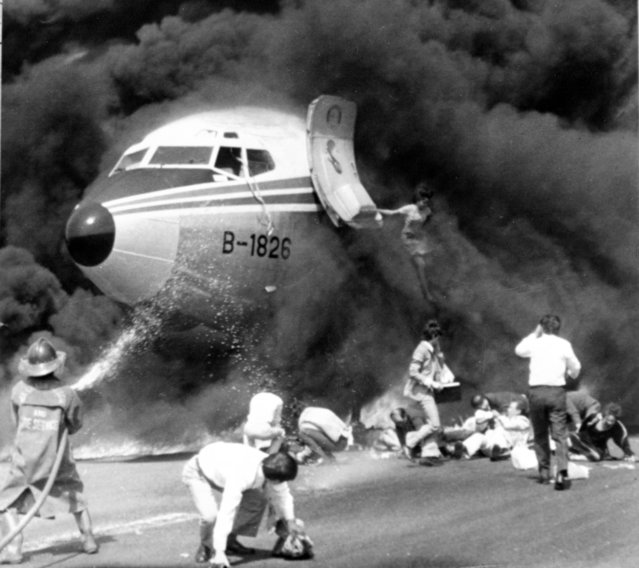 China Airlines stewardess Wang Wen Hwang leaps from the burning China Airlines plane after assisting the passengers to safety February 27, 1980. Miss Wang saved most of the lives of the passengers despite her injuries. She was the last to leave the planes. (Photo by AP Photo) 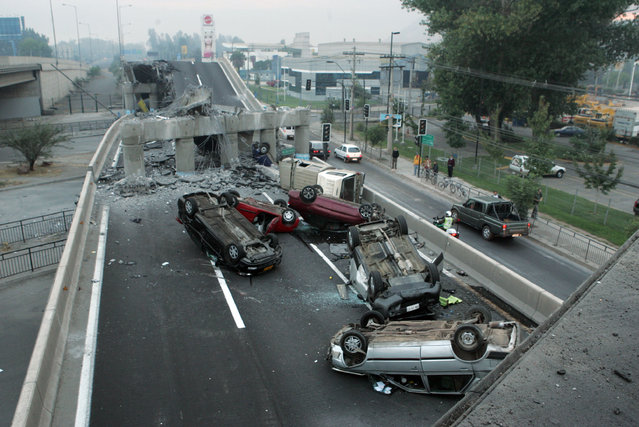 Vehicles that were driving along a highway that collapsed during the earthquake near Santiago are seen overturned on the asphalt Saturday February 27, 2010 after an 8.8-magnitude earthquake struck central Chile early Saturday. The quake hit 200 miles (325 kilometers) southwest of the capital and the epicenter was just 70 miles (115 kilometers) from Concepcion, Chile's second-largest city. (Photo by David Lillo/AP Photo) 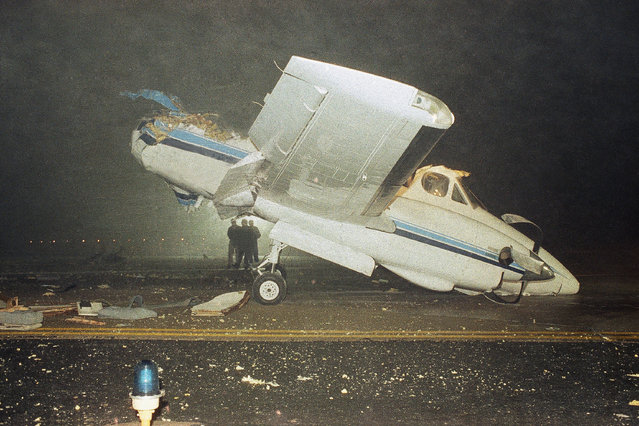 Emergency workers study the wreckage of a Beechcraft King Air twin-engine plane after it was hit by an Eastern Airlines 727 at Hartsfield Atlanta International Airport in Georgia, January 19, 1990. One person was killed in the crash. (Photo by AP Photo) 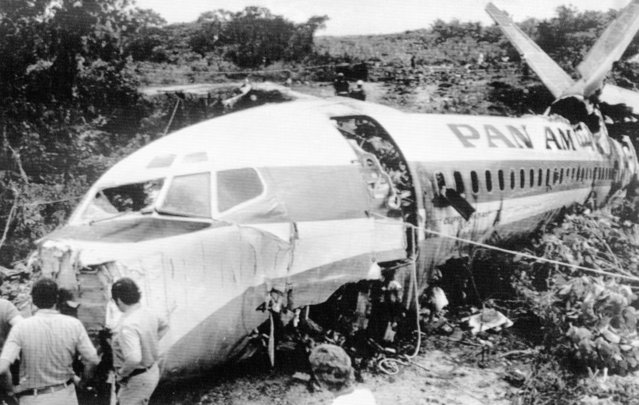 The hull of the Pan American Boeing 707 jetliner which crashed during bad weather on Pago Pago, Samoa, January 30, 1974 rests in a jungle clearing, Feb 2. Ninety one of the 100 people aboard were killed in the accident. (Photo by AP Photo) 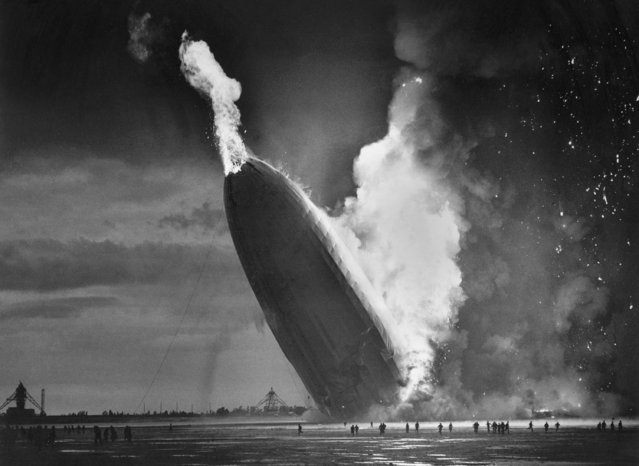 The German dirigible Hindenburg crashes to earth, tail first, in flaming ruins after exploding on May 6, 1937, at the U.S. Naval Station in Lakehurst, N.J. The 1920s and 1930s were the golden age of dirigibles which crossed the Atlantic Ocean in about three days – faster than a ship. The Hindenburg was the largest airship ever built at 804 feet long and flew up to 85 miles per hour while held aloft by hydrogen, which was highly flammable. The disaster, which killed 36 people after a 60-hour transatlantic flight from Germany, ended regular passenger service by the lighter-than-air airships. (Photo by Murray Becker/AP Photo) 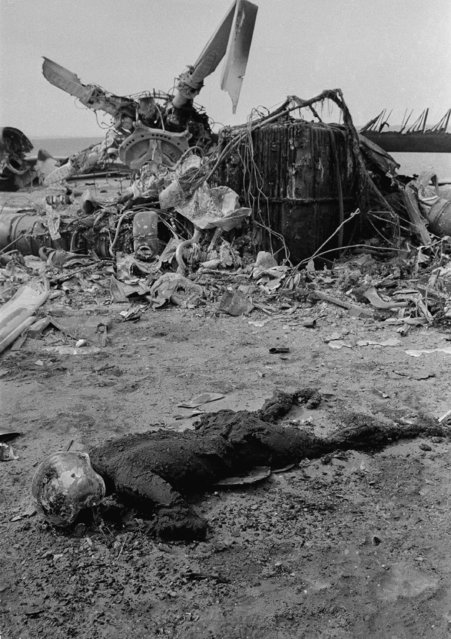 A charred body with helmet lies beside wreckage of a helicopter, April 27, 1980, in the desert area of eastern Iran, Dasht-E-Kavir. Five bodies have been recovered from the wreckage of American aircraft in the desert following the American forces attempted rescue of the 50 U.S. hostages being held in the U.S. Embassy in Teheran. (Photo by Mohammad Sayyad/AP Photo) 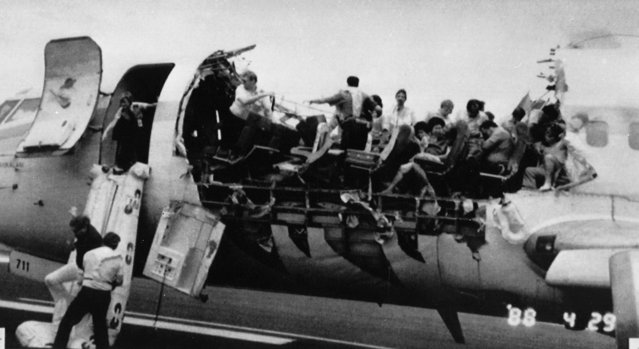 Co-pilot Mimi Tompkins, standing in doorway, helps a man slide down a chute of a heavily damaged Aloha Airlines jet shortly after landing on April 30, 1988. Pilot Robert Schornstheimer, at front of damaged section, looks on. (Photo by AP Photo) 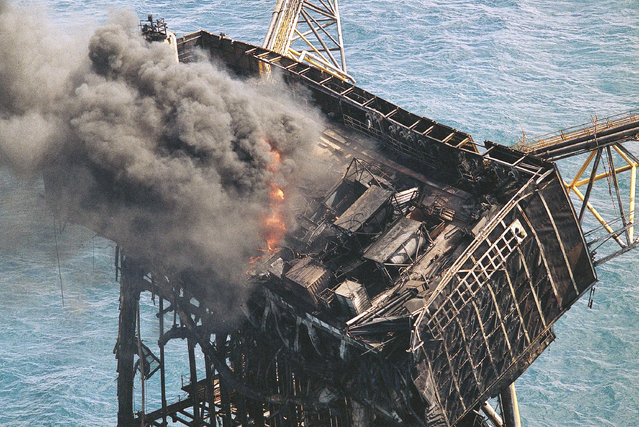 Thick smoke and flames still rise from the mangled remains of the Piper Alpha oil platform in the North Sea off the coast of Scotland in Aberdeen, July, 8, 1988. One-hundred-sixty oil workers were killed when a massive explosion and fire ripped through the platform Wednesday night. (Photo by Dave Caulkin/AP Photo) This handout picture from the Transport Ministry of China released on January 14, 2018 shows smoke and flames coming from the burning oil tanker “Sanchi” at sea off the coast of eastern China. An Iranian official said on January 14, 2018 there was no chance any crew members had survived among the 32 aboard an oil tanker on fire off the coast of China for more than a week. (Photo by AFP Photo/Transport Ministry of China)
Edit Del
12 Jun 2018 00:01:00, post received 0 comments
Publication archive:
←   →
Popular tags:
All tags
Last searches: