Fact Some Photos: Eclipse of the Sun 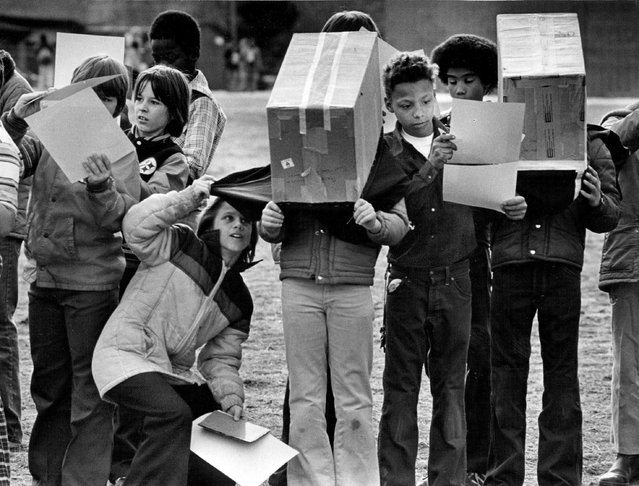 Many Denverites took a guarded look at the sun or at the sun's image in a partial, 88 percent eclipse in 1979. Denver Public School teachers took advantage of student interest in the astronomical phenomenon (there won't be another until the year 2017) to carry out some scientific classroom projects. William Wilkin, principal at Stephen Knight Elementary School, said all 380 pupils left their classrooms to see the eclipse from the vantage point of the playground. Many youngsters made viewing boxes to watch the eclipse by projection. (Photo by Ernie Leyba/The Denver Post) 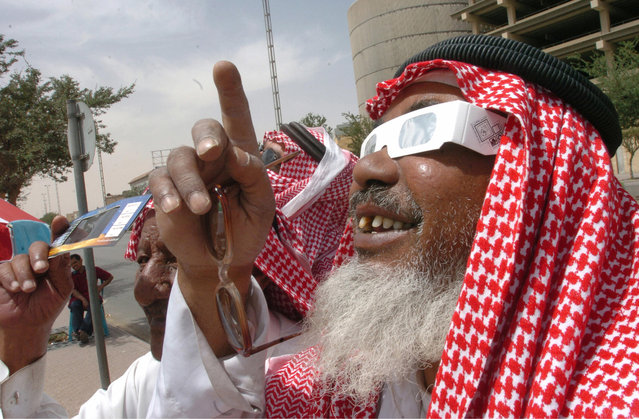 An elderly Saudi wearing protective glasses watches the partial solar eclipse in Riyadh, 29 March 2006. The fourth total eclipse of the 21st century took place. The umbra was tracking eastward at dizzying speed across Africa and parts of the Middle East before expiring in Asia, covering a distance of 14,500 kilometers (9,000 miles) where the eclipse would end at 11:48 GMT. (Photo by Fahd Shadeed/AFP Photo) 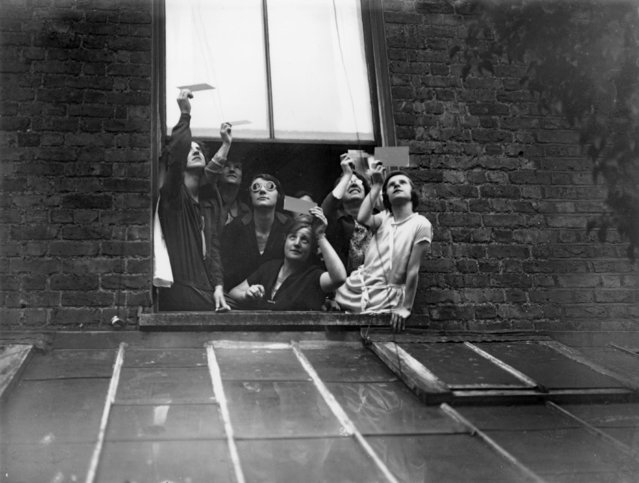 A group gathered in a window to view the total solar eclipse over London through smoked glass on June 29, 1927. (Photo by H. F. Davis/Topical Press Agency/Getty Images) 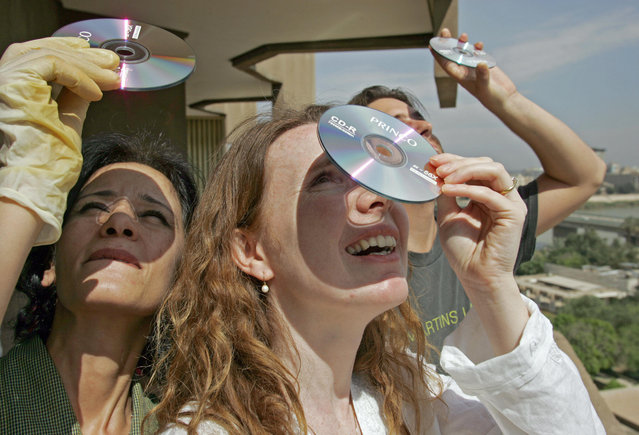 An Iraqi woman and foreigners use pair of compact discs as a filter to watch the partial solar eclipse in war-torn Baghdad, 29 March 2006. Without access to proper equipment to protect their eyes from the sun's rays, eclipse watchers in Iraq used makeshift filters. The moon blotted out the sun over northwest Africa early Wednesday, turning day into night in a total solar eclipse as it swept a shadowy path from the outer tip of Brazil to the steppes of Mongolia. (Photo by Hassan Ammar/AFP Photo) 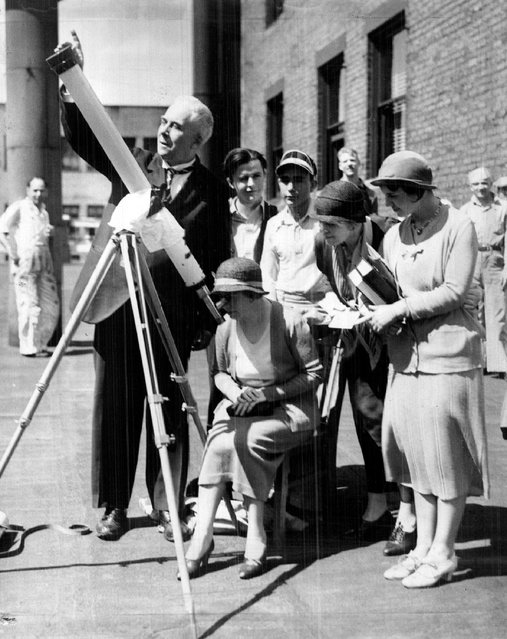 Viewing the Eclipse Prof. George Leo Patterson, The Denver Post astronomer, shown here, viewed the eclipse in 1932 thru a telescope on top of The Post buildings, Professor Patterson and other astronomers and scientists thru out the country reported new discoveries as the result of the study. (Photo by Denver Post/Library archive) 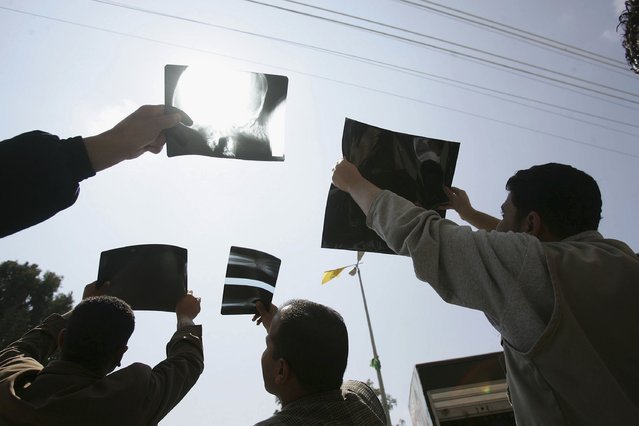 Palestinians use X-Ray prints as makeshift filters to watch the moon partially covering the sun during a partial solar eclipse seen on March 29, 2006, in Gaza City, Gaza Strip. A partial eclipse occurs when sun and moon are not exactly in line, and the moon only partially obscures the sun. (Photo by Abid Katib/Getty Images) 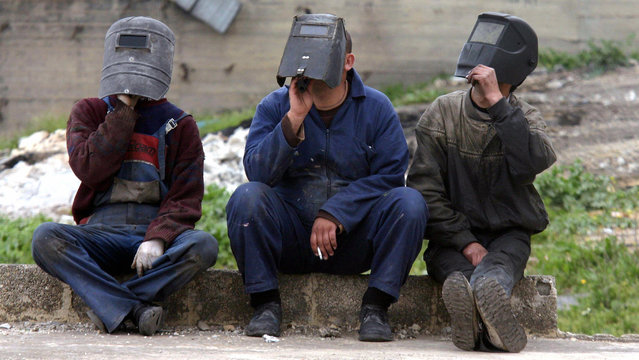 Palestinian welders watch the partial eclipse of the sun using visors during a break from work in the West Bank city of Ramallah, 29 March 2006. The eclipse, caused by the moon blotting out the sun, begun on the northeastern tip of Brazil, racing across the Atlantic Ocean and over northwest Africa and parts of the Middle East and Turkey before covering Georgia and Central Asia. (Photo by Jamal Aruri/AFP Photo) 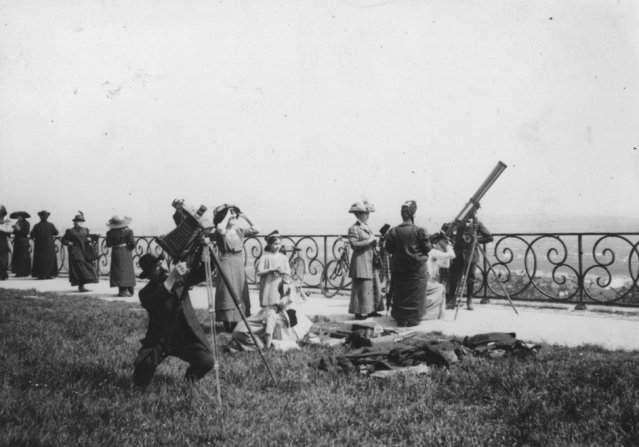 People gaze upwards, aligning cameras and optical equipment, towards a total eclipse of the sun in the Parisian suburb of St. Germain-en-Laye in 1912. (Photo by Hulton Archive/Getty Images) 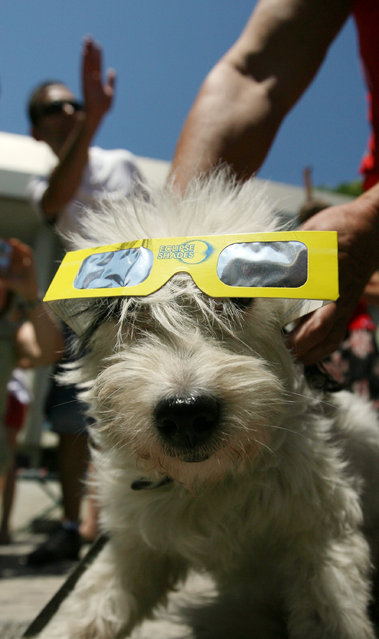 A playful owner puts protective glasses onto his dog during a total solar eclipse near the Bulgarian's Black sea town of Varna east of the capital Sofia, Friday, Aug. 1, 2008. The rare total solar eclipse will be seen across much of eastern Europe during Friday although some areas are expected to be cloudy. (Photo by Petar Petrov/AP Photo) 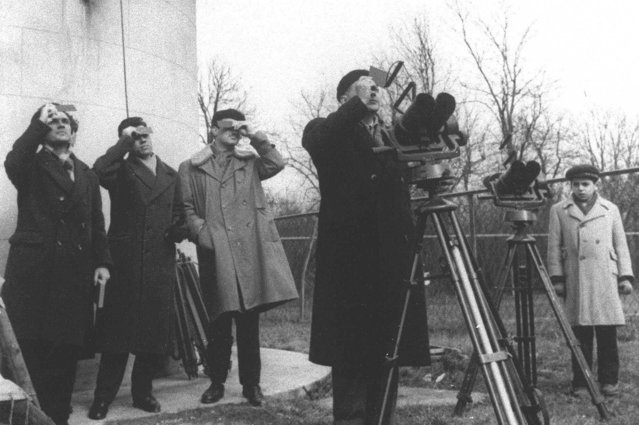 Romanians observe a total eclipse of the sun through smoked pieces of glass in downtown Bucharest February 15, 1961. (Photo by AP Photo/ROMPRES) 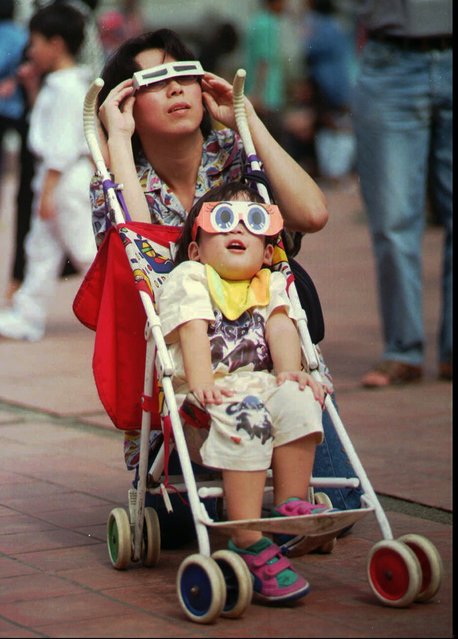 A child and mother don special protective glasses to view a partial solar eclipse in the Thai capital of Bangkok Tuesday, October 24, 1995. Tens of thousands of Thais surged to upcountry areas where the rare eclipse – seen along a band across the southern Asia landmass – was total. Doctors recommend viewers to wear special glasses to prevent eye damage. (Photo by Sakchai Lalit/AP Photo) A Woman Astronomer is among the many noted scientists who will photograph the total eclipse of the sun Wednesday. She is Dr. Vibert Douglas of Montreal, shown here sitting up her instruments at Magog, Quebec, 1932. (Photo by AP Photo) 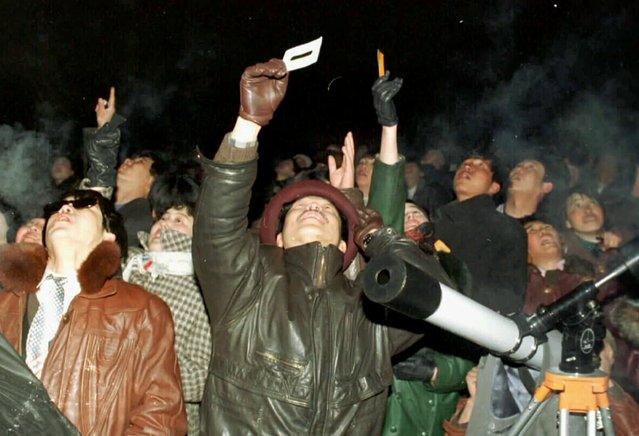 Over 2000 scientists and amateur star-gazers and thousands of local residents watch the total solar eclipse through various tools in the northern tip of China, Mohe country, Sunday March 9, 1997. Sky gazers in China and Russia got a double delight Sunday when the sun disappeared behind the moon in a total solar eclipse that coincided with a rare view of the bright Hale-Bopp comet. Tens of thousands of people in northern China and eastern Siberia watched the sky go dark and felt already freezing temperatures drop as the moon blocked the sun s rays for more than two minutes. (Photo by Chen Kaixing/AP Photo) 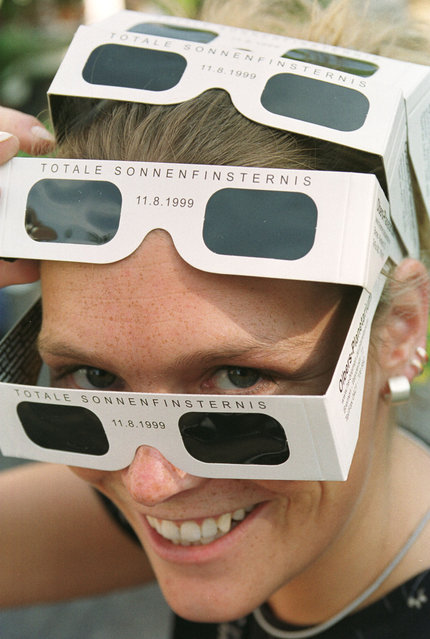 Stefanie Otten poses with pairs of safety goggles in Bremen, northwest Germany, Tuesday, July 20, 1999. Astronomers expect a total solar eclipse on Wednesday, July 11, 1999. Experts emphasize: never look directly into the sunlight. Especially not through binoculars, cameras or other optical instruments. They focus the light into the eyes and this could lead to blindness. (Photo by Joerg Sarbach/AP Photo) 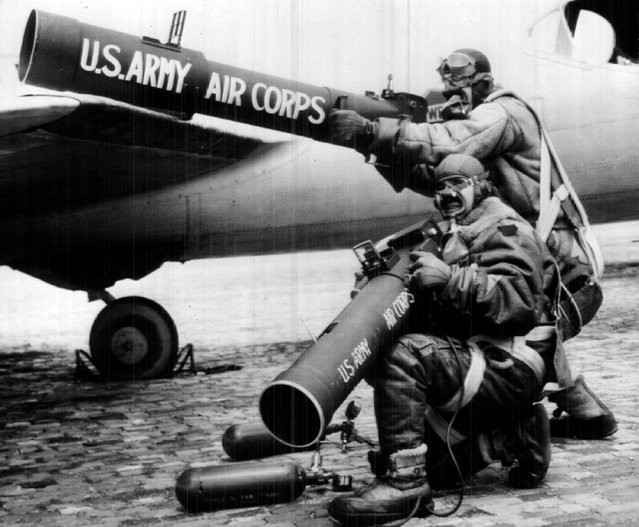 Major George W. Goddard (standing), chief of the army air corps photographic branch at Wright field, Dayton, O., and Sgt. A. E. Mathos (kneeling), army aerial photographer, are shown here вЂњwarming upвЂќ The huge aerial cameras they will use in вЂњshootingвЂќ the ring eclipse of the sun in 1940. They are wearing the equipment they will use when a huge army bomber takes them up more than five miles. Maj. Goddard has a 60-inch telephoto camera, Sgt. Mathos a 40-inch camera. (Photo by Denver Post/Library archive) 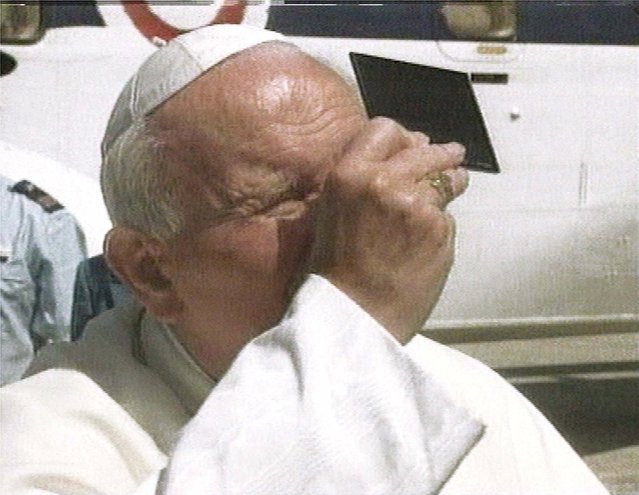 Pope John Paul II watches the eclipse through a piece of special glass at Castel Gandolfo, the papal summer retreat in the hills southeast of Rome, in this image taken from television Wednesday August 11 1999. The pope kept his Vatican weekly audience with pilgrims short, then flew to Castel Gandolfo where he could see about 84 percent of the total coverage. (Photo by AP Photo/APTN) 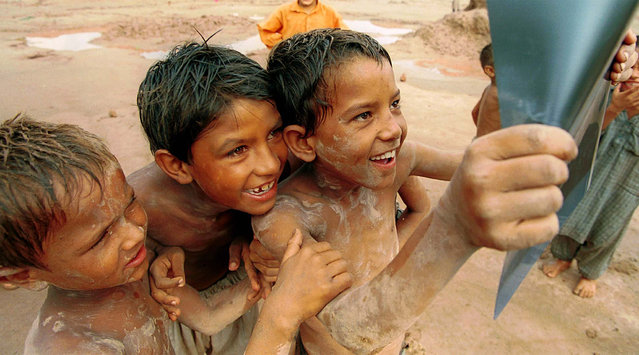 Children who work at brick kiln in Rawalpindi view the solar eclipse through the exposed sheet of x-ray, Wednesday, August 11, 1999. The total eclipse of the sun was seen in some parts of Pakistan including Karachi. (Photo by B.K. Bangash/AP Photo) 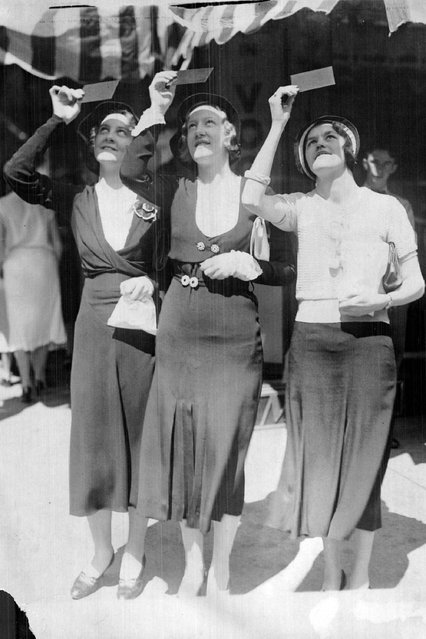 Watching Old Sol thru rose-colored glasses were these three pretty girls The Post's cameraman found on Sixteenth street at the time of the partial eclipse in 1932. A lot of people were looking at the sun at the same time but it was difficult for them to keep their eyes skyward with the girls nearby. Left to right: Leona Lindsay, Marian Lindsay and Claribel Givler. (Photo by Denver Post/Library archive) 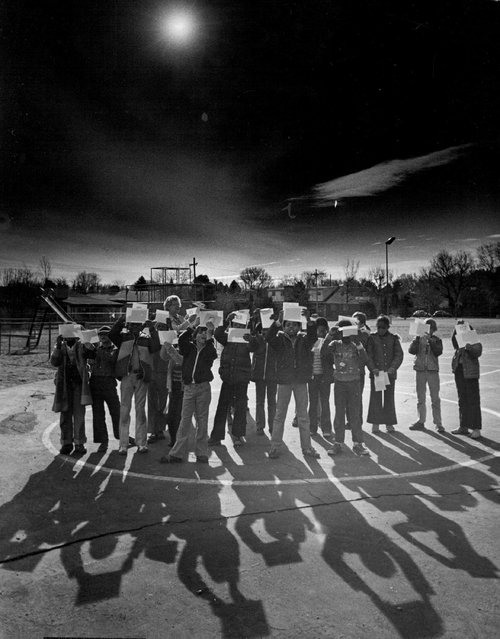 Pupils At Stephen Knight School view the solar eclipse in 1979. They let sun shine over their shoulders and look at image projected through small hole of paper onto another paper. (Photo by Ernie Leyba/The Denver Post) 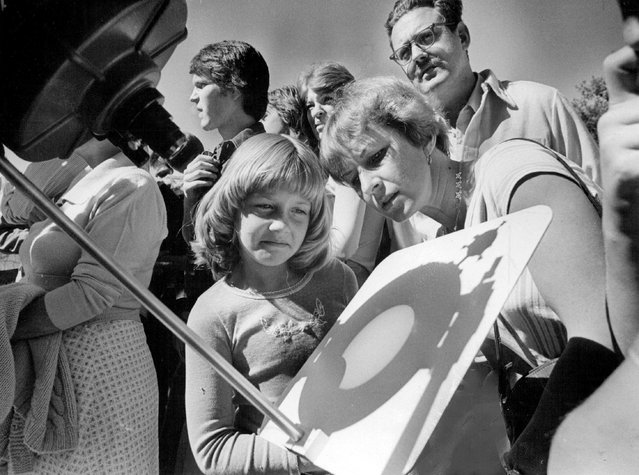 Mrs. Reggie Billings and her 7-year- old daughter, Rene, were in a crowd at Gates Planetarium in City Park to view partial eclipse of sun in 1977. Twenty- four per cent of the sun disappeared about 2:35 p.m. Wednesday as the shadow of the moon crossed its surface. Gates set up a telescope for public viewing. The sun, left, took on the aspect of a moon when the moon passed between it and earth. Photograph taken at the National Oceanic and Space Environment Laboratory in Boulder shows intervening moon and a temporary facet of the sun-a flare. The flare, which normally disturbs radio communications on earth, appears as light spots at center. (Photo by Duane Howell/The Denver Post) 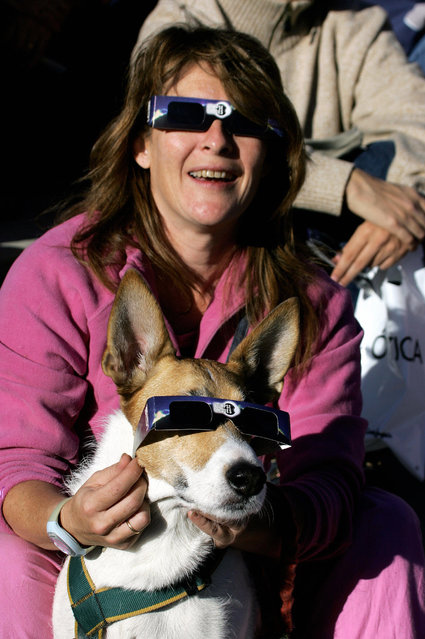 A dog and its owner watch the annular eclipse of the sun in Madrid, October 3, 2005. In an annular eclipse, the Moon moves between the Sun and Earth but, because of a tiny difference in distance due to celestial mechanics, does not completely cover the solar face as in a total eclipse. (Photo by Philippe Desmazes/AFP Photo) 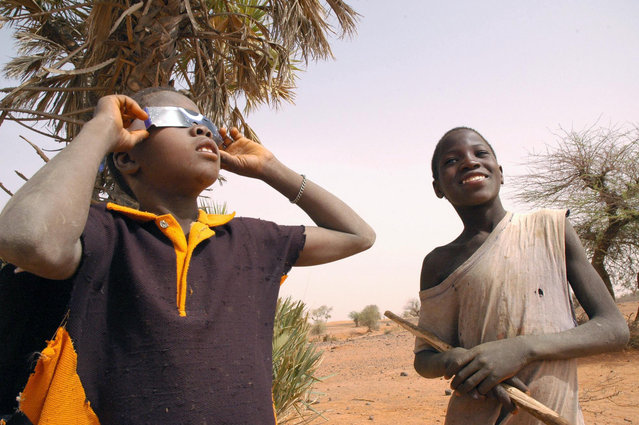 Children watch a total solar eclipse in a village 30kms of Niamey, 29 March 2006. The moon blotted out the sun, turning day into night, in a total solar eclipse that carved a path from the tip of Brazil over northern Africa to the steppes of Mongolia. Thousands of astronomers and thrill-seekers gazed heavenward, prayers were said by the faithful and schools shut for the day as the three-hour celestial ballet raced across half the world. (Photo by Nicolas Postal/AFP Photo) An Australian girl and her mother watch the solar eclipse in the desert tourist camp in Galo, 1300 km south of the Libyan capital of Tripoli, March 29, 2006. Thousands of astronomers and thrill-seekers gazed heavenward, prayers were said by the faithful and schools shut for the day as the three-hour celestial ballet raced across half the world. (Photo by Khaled Desouki/AFP Photo)
Edit Del
25 Jul 2017 09:31:00, post received 0 comments
Publication archive:
←   →
Popular tags:
All tags
Last searches: