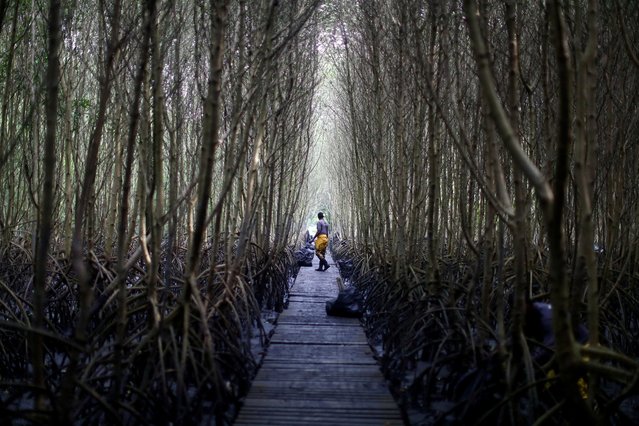 A worker of the Jardim Gramacho landfill collects garbage in the red mangrove seedlings area, which was the site of South America's largest open-air landfill, at the recovering mangrove forest in Duque de Caxias in Rio de Janeiro state, Brazil on June 1, 2022. (Photo by Pilar Olivares/Reuters) 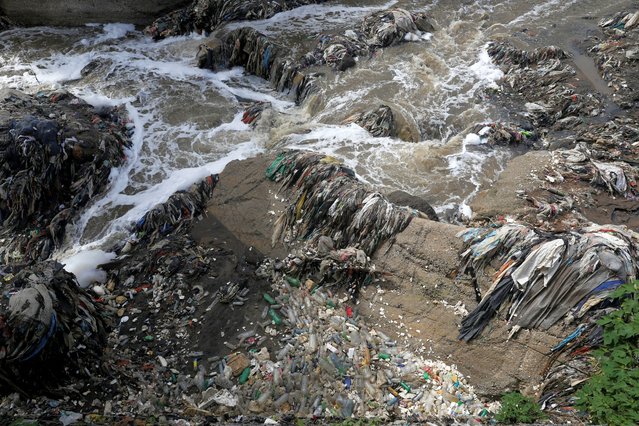 Garbage and plastic bottles float on Las Vacas river considered one of the most polluted rivers in the world, in the municipality of Chinautla, where the Ocean Cleanup NGO is testing a device to contain the garbage that ends up in the Atlantic Ocean, in Guatemala City, Guatemala on June 8, 2022. (Photo by Luis Echeverria/Reuters) 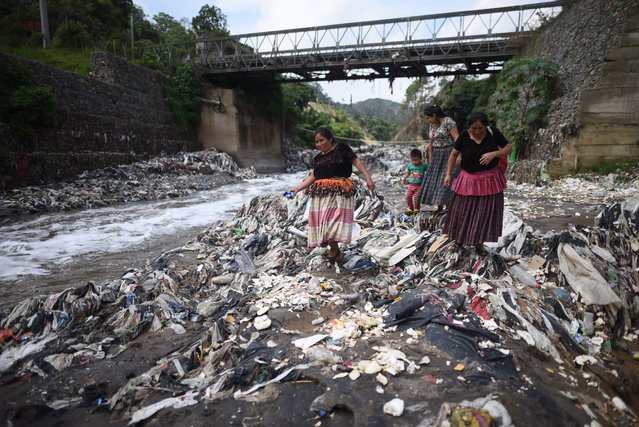 Women recover materials from the garbage on the polluted Las Vacas River, a tributary of the Motagua River, in Santa Cruz Chinautla, Guatemala, 08 June 2022. The Dutch environmental organization The Ocean Cleanup assured that it intends to place a fence that will help clean the garbage of the Motagua River in Guatemala, which it considers one of the most polluted on the planet. “Our mission is to rid the oceans of garbage and that is why we are working on one of the most polluting watersheds in the world and turning it into one of the cleanest”, its director, Boyan Slat, told Efe. (Photo by Edwin Bercián/EPA/EFE) 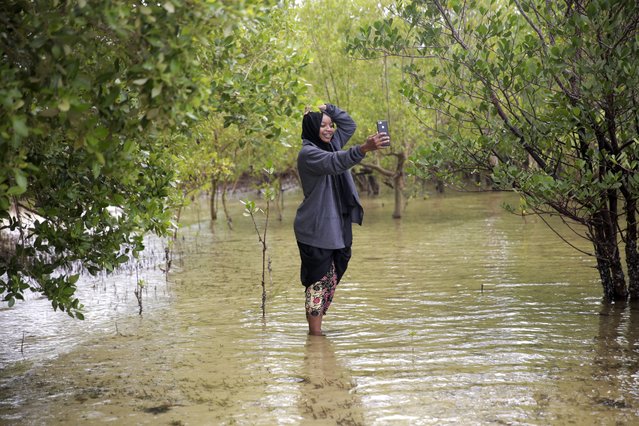 A member of Mikoko Pamoja, Swahili for “mangroves together”, takes a selfie in front of mangrove trees at Gazi Bay, in Kwale county, Kenya on Sunday, June 12, 2022. The project has for nearly a decade quietly plodded away, conserving over 100 hectares (264 acres) of mangroves while simultaneously planting new seedlings. (Photo by Brian Inganga/AP Photo) 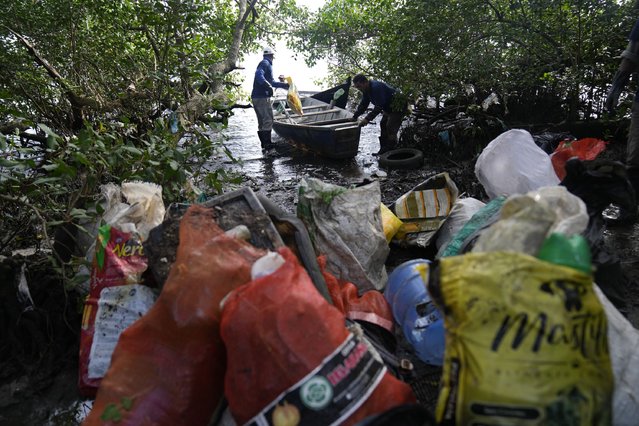 Fishermen carry garbage collected from the mangroves of Guanabara Bay in Rio de Janeiro, Brazil, Monday, June 13, 2022. Fishermen in the area are part of an environmental project supported by BVRio Institute and earn a salary collecting the garbage from the bay. (Photo by Silvia Izquierdo/AP Photo) 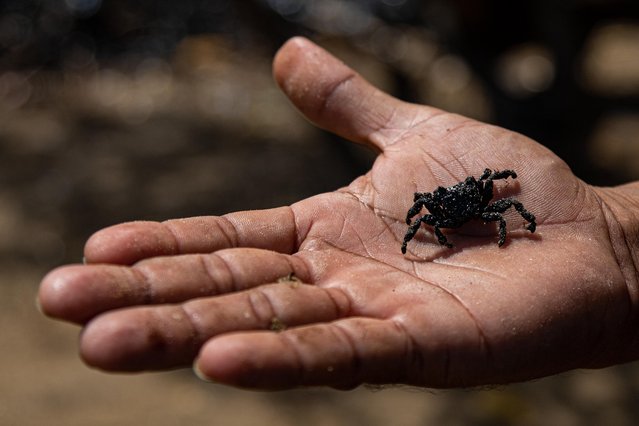 A person displays a crab affected by oil pollution in the waters of Lake Maracaibo, in the Mara municipality, Zulia state, Venezuela, 20 June 2022. The oil contaminating the shore has seeped from neglected oil wells and pipelines that crisscross the lake. (Photo by Miguel Gutierrez/EPA/EFE) 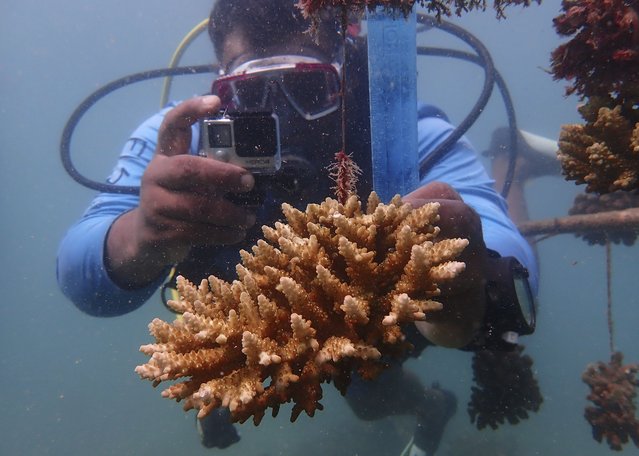 Coral reef restoration ranger Yatin Patel measures an artificial reef structure in the Indian Ocean near Shimoni, Kenya on Monday, June 13, 2022. The marine area off the coast of Kenya at Wasini Island, jointly managed by a foundation and the island's community, has been planting over 8,000 corals a year since early 2010s and placed about 800 artificial reef structures in the channel in a bid to restore Wasini's coral gardens. (Photo by Brian Inganga/AP Photo) 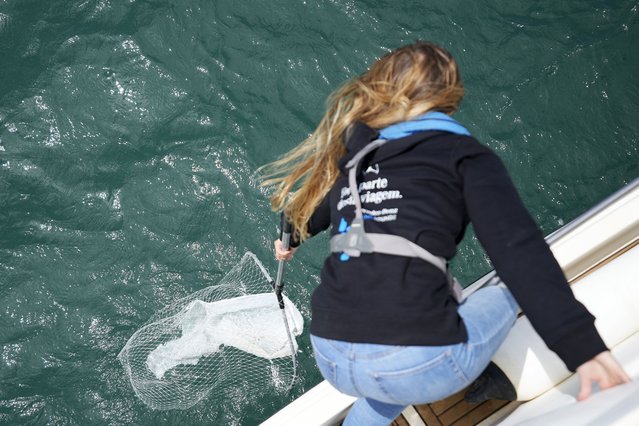 Marine biologist Catarina Pereira catches plastic floating on the Tagus River during a boat trip to watch dolphins at the mouth of the Tagus river in Lisbon, Friday, June 24, 2022. Starting Monday the United Nations is holding its five-day Oceans Conference in Lisbon hoping to bring fresh momentum for efforts to find an international agreement on protecting the world's oceans. (Photo by Armando Franca/AP Photo) 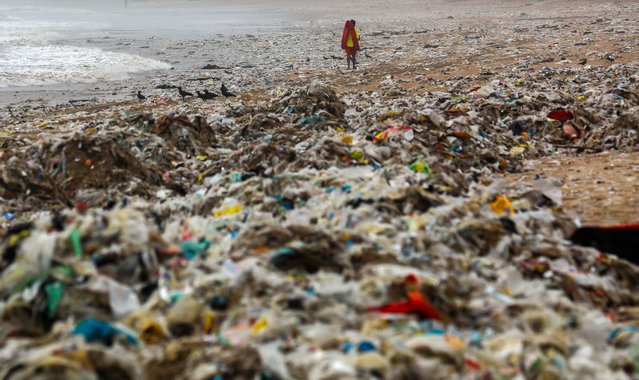 A life guard walks past a plastic waste and garbage washed ashore during monsoon at seashore of Juhu beach in Mumbai, India, 08 July 2022. The city’s coastline witnesses serious garbage crisis as people dump their trash directly into nullahs or storm water drains, rivers and creeks, brought back on the beaches during the monsoon season. The Brihanmumbai Municipal Corporation (BMC) has prohibited general public from visiting the beaches as the Meteorological Department issued a red alert in Mumbai. (Photo by Divyakant Solanki/EPA/EFE) 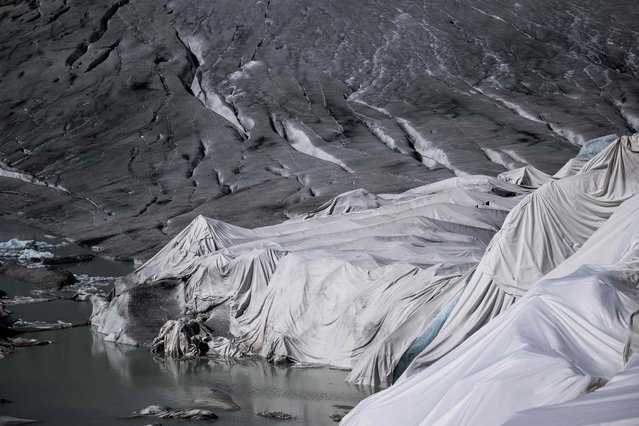 This photograph taken near Gletsch, in the Swiss Alps, on July 8, 2022 shows insulating foam covering a part of the Rhone Glacier to prevent it from melting next to its glacial lake, formed by the melting of the glacier due to global warming. The Rhone Glacier has been selected among ten glaciers across the world to be monitored by high resolution time-lapse cameras as part of the Planet Watch projet launched by French digital image solution startup Enlaps, helping to document and measure the impact of global warming. (Photo by Fabrice Coffrini/AFP Photo) 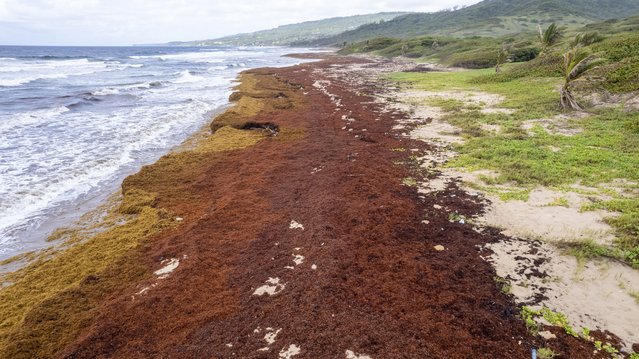 Lakes Beach is covered in sargassum in St. Andrew along the east coast of Barbados, Wednesday, July 27, 2022. More than 24 million tons of sargassum blanketed the Atlantic in June, up from 18.8 million tons in May, according to a monthly report published by the University of South Florida’s Optical Oceanography Lab that noted “a new historical record”. (Photo by Kofi Jones/AP Photo) 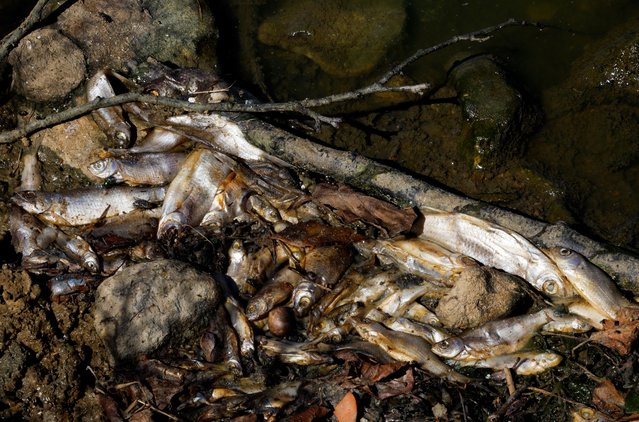 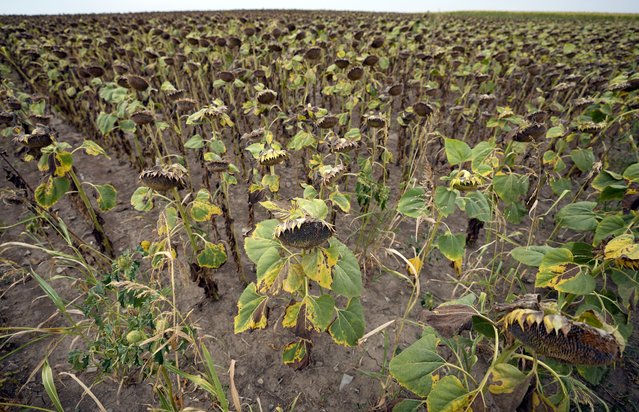 Wilted sunflowers in a field near the village of Conoplja, 150 kilometers north-west of Belgrade, Serbia, Tuesday, August 9, 2022. Drought in Serbia have led to forecasts for this year's harvests being reduced. (Photo by Darko Vojinovic/AP Photo) 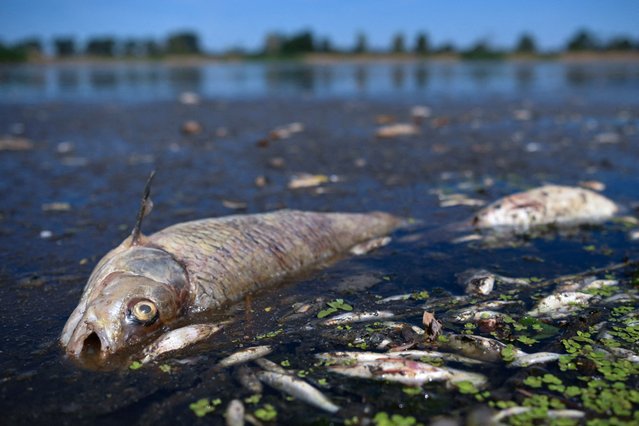 A dead fish lies on the bank of Oder River on the German-Polish border, in Brieskow-Finkenheerd, Frankfurt (Oder), Germany, August 11, 2022. Authorities are looking into the cause of the mysterious fish deaths. (Photo by Annegret Hilse/Reuters) 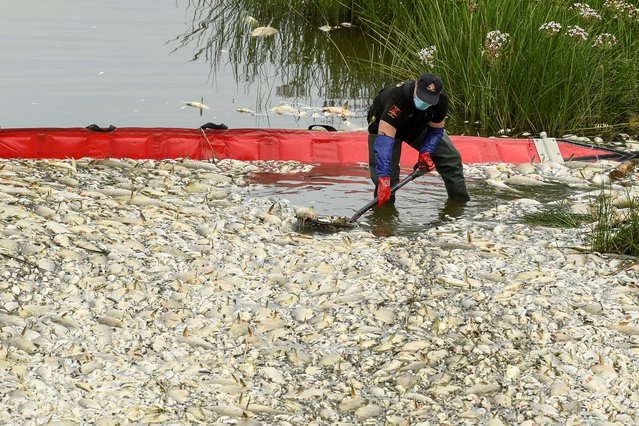 Dead fish are removed from the Oder river at a mobile catch basin, as water contamination is believed to be the cause of a mass fish die-off, by the German border, in Krajnik Dolny, Poland, August 13, 2022. (Photo by Annegret Hilse/Reuters)
Edit Del
07 Oct 2022 04:22:00, post received 0 comments
Publication archive:
←   →
Popular tags:
All tags
Last searches: