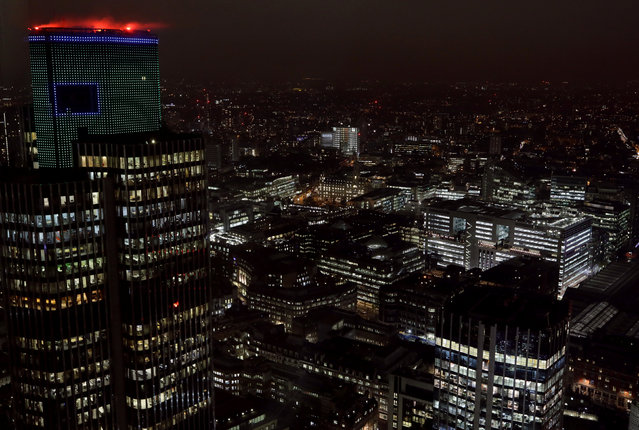 A general view of the City of London at night November 14, 2016. (Photo by Kevin Coombs/Reuters) 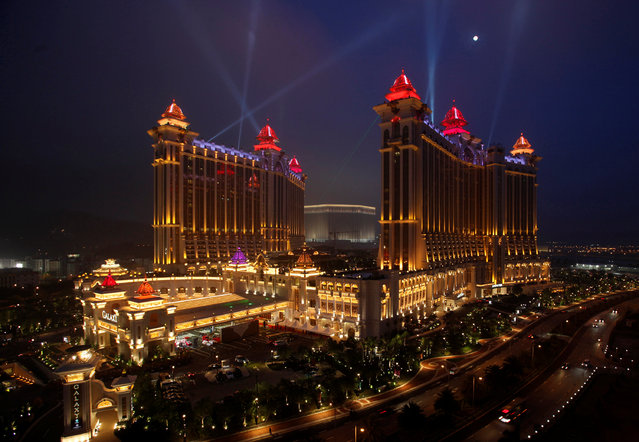 Galaxy Macau, the latest resort in Macau built by Galaxy Entertainment Group, is lit up in the evening after it opened for business May 15, 2011. (Photo by Bobby Yip/Reuters) 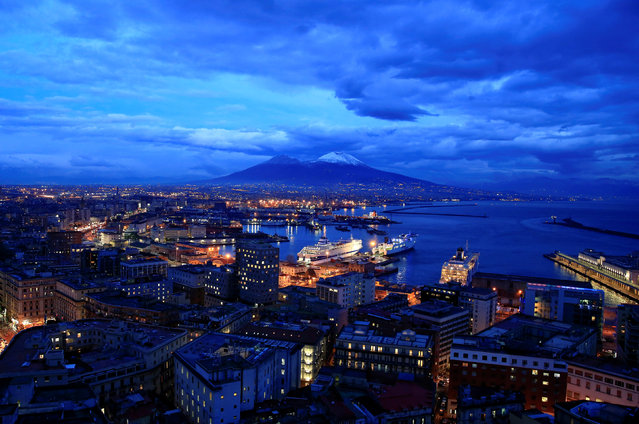 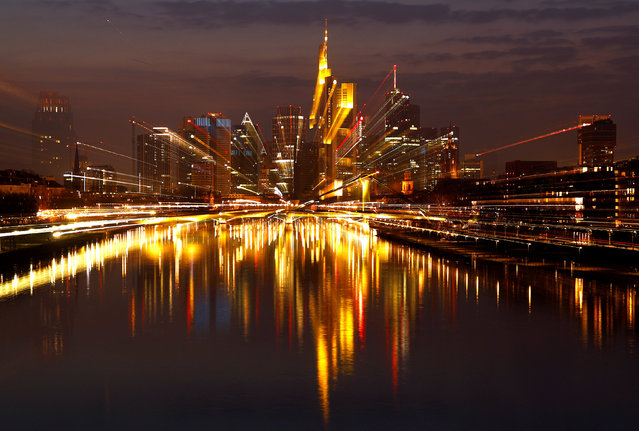 The Frankfurt skyline with its financial district is photographed on early evening in Frankfurt, Germany, March 25, 2018. Picture is taken with long time exposure while using the zoom. (Photo by Kai Pfaffenbach/Reuters) 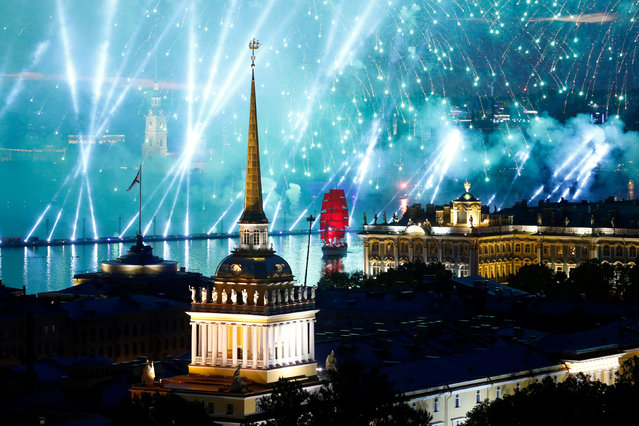 Fireworks are seen over the Admiralty building, the Peter and Paul cathedral and the State Hermitage museum during the festivities marking school graduation in St. Petersburg, Russia June 24, 2018. (Photo by Anton Vaganov/Reuters) 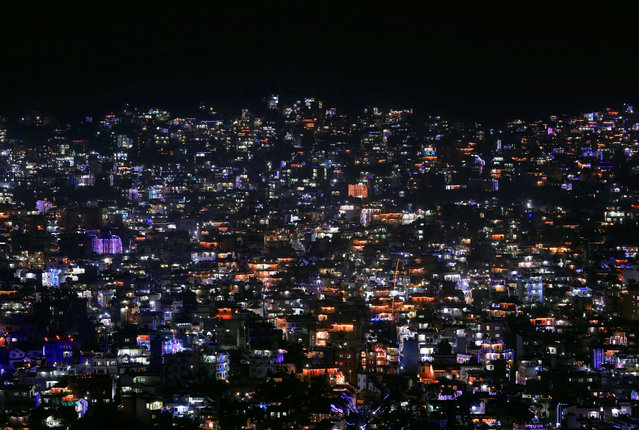 A general view shows houses decorated with lanterns and lights during the Tihar festival, also called Diwali, the Hindu festival of lights in Kathmandu, Nepal on November 7, 2018. (Photo by Navesh Chitrakar/Reuters) 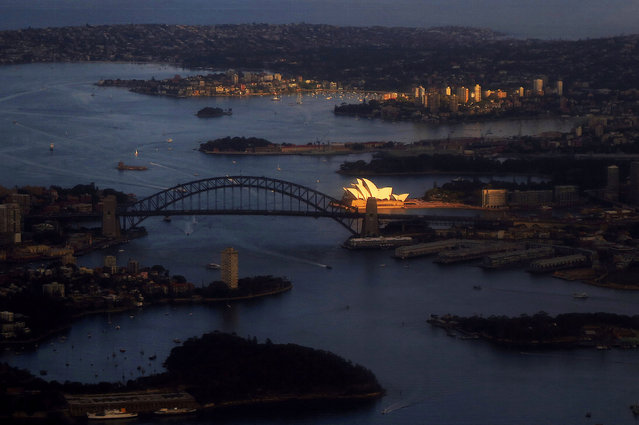 The Sydney Harbour Bridge can be seen over Sydney Harbour and in front of the Sydney Opera House as it is lit by the setting sun, on a summer day in Australia, November 24, 2018. (Photo by David Gray/Reuters) 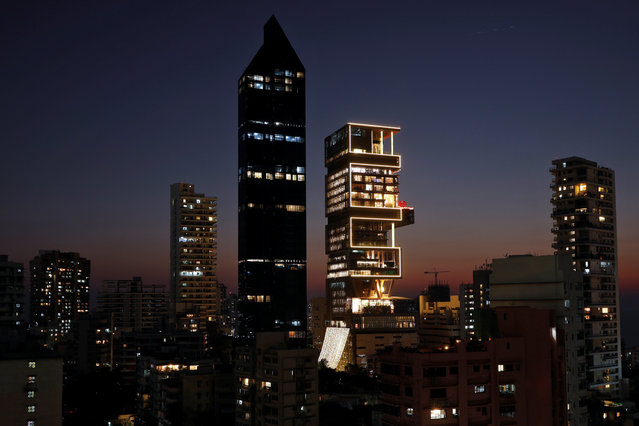 Antilia, the house of the Chairman of Reliance Industries Mukesh Ambani, is decorated during his daughter Isha Ambani's wedding, in Mumbai, December 12, 2018. (Photo by Danish Siddiqui/Reuters) 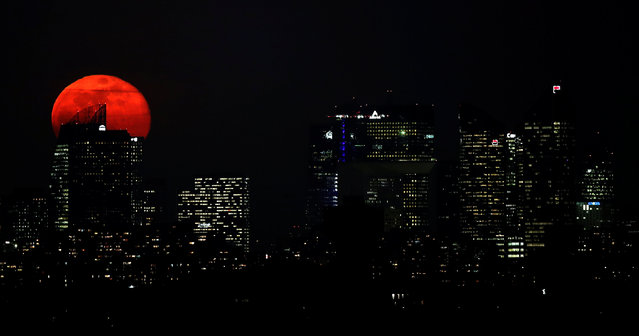 The moon rises behind buildings of the Grande Arche, the headquarters of Areva, Societe Generale and EDF at the financial district of La Defense near Paris, France, March 21, 2019. (Photo by Christian Hartmann/Reuters) 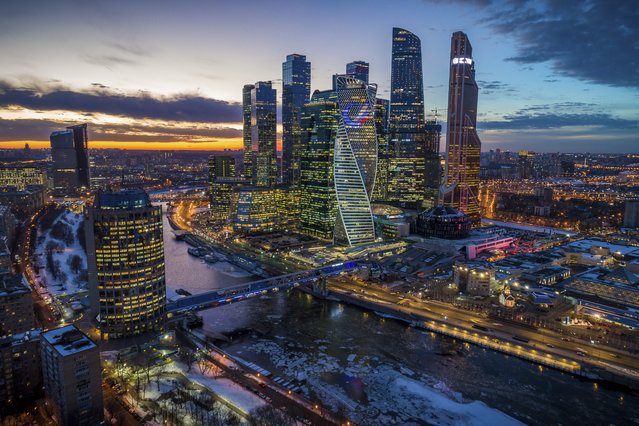 In this photo taken on Tuesday, February 19, 2019, The Moscow City skyscrapers are seen during a sunset in Moscow, Russia. (Photo by Dmitry Serebryakov/AP Photo) 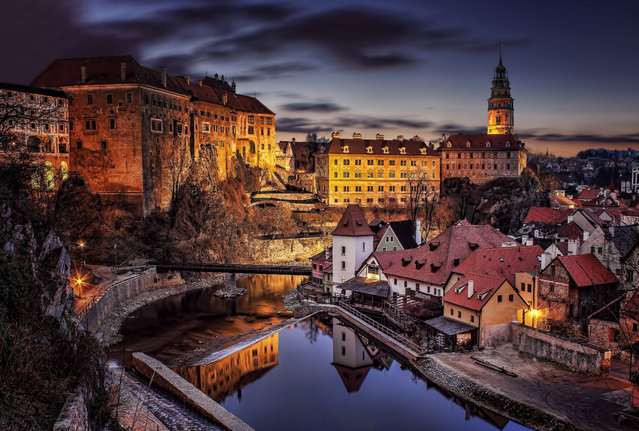 Photographer Petr Kubát captures Český Krumlov – the city in South Bohemia, one of a series of images taken as part of a project on sunrise and twilight in the area. (Photo byPetr Kubát/Rex Features/Shutterstock) 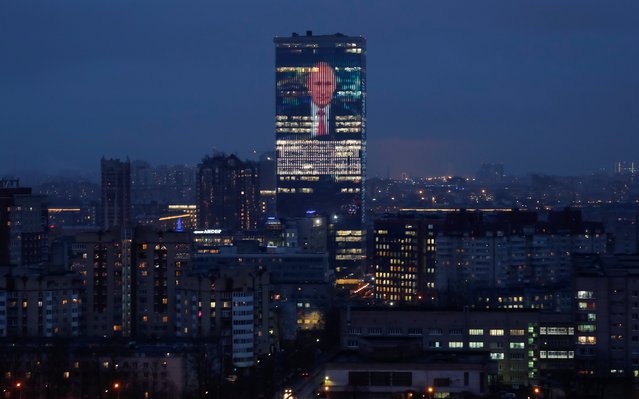 An electronic screen, installed on the facade of a business centre, shows an image of Russian President Vladimir Putin and a quote from his annual address to the Federal Assembly in Saint Petersburg, Russia on January 15, 2020. (Photo by Anton Vaganov/Reuters) 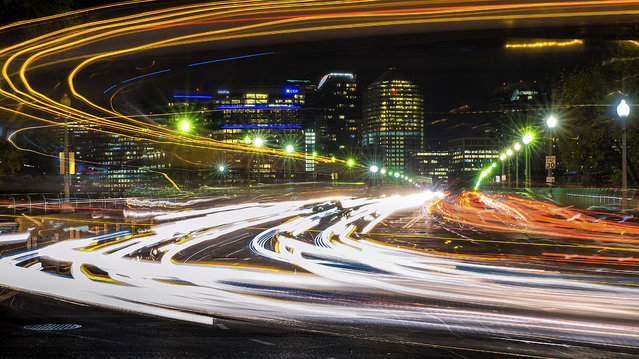 Traffic streaks across the Francis Scott Key Bridge linking Virginia and Washington at the start of the Thanksgiving holiday weekend Wednesday, November 22, 2017, in Washington. The vast majority of the travel during the long holiday weekend will be by automobile. (Photo by J. David Ake/AP Photo) 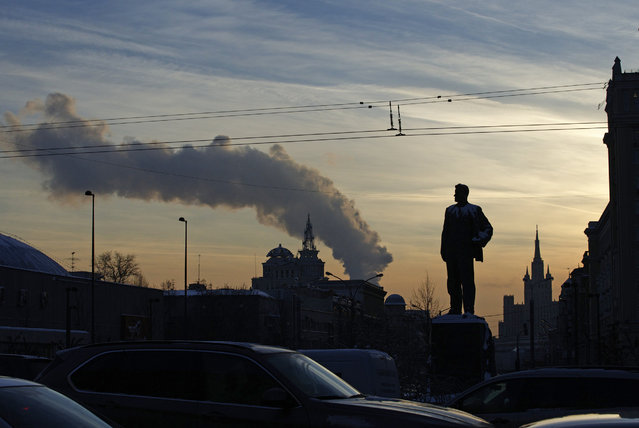 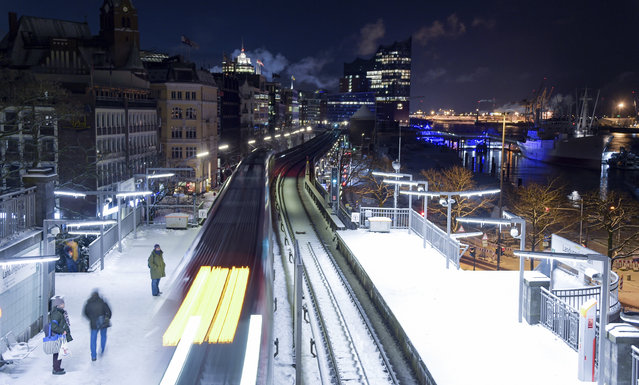 Snow covers the streets near the harbor in Hamburg, Germany, Monday, February 26, 2018. Snow and freezing sub-zero temperatures have a grasp on some parts of Germany as meteorologists reported a new cold record of minus 27 degrees Celsius (minus 16.6 Fahrenheit) for this winter on Zugspitze mountain in the Alps. (Photo by Axel Heimken/dpa via AP Photo) 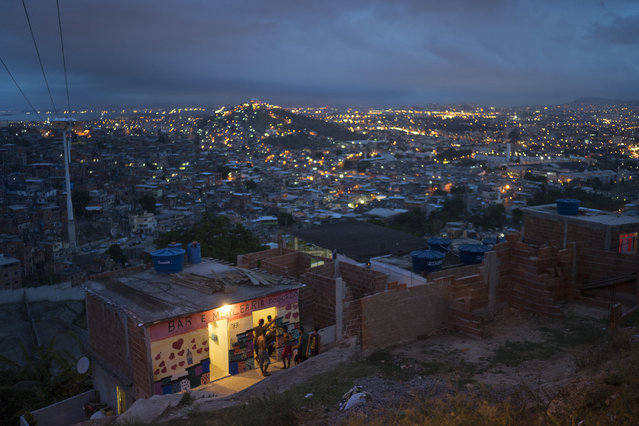 In this March 6, 2017 photo, people stand at a bar decorated with a mural by artist Mariluce Maria de Souza at the Alemao slum in Rio de Janeiro, Brazil. Souza's work has made her an example of empowerment in the slum for girls and women, who sometimes face domestic violence at home and discrimination in the workplace. (Photo by Leo Correa/AP Photo) 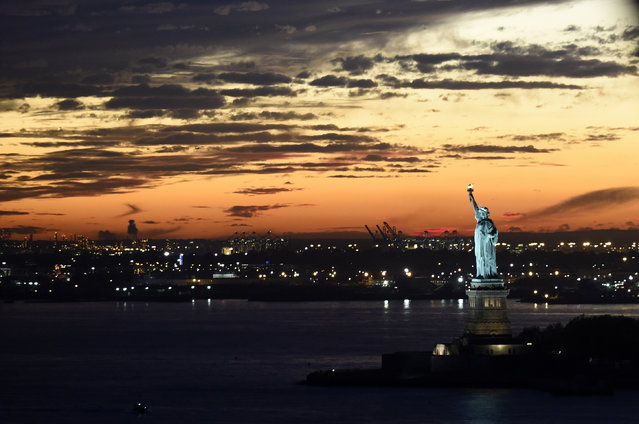 A view of the Statue of Liberty as seen from the air near New York City, Monday, November 2, 2015. (Photo by Susan Walsh/AP Photo) 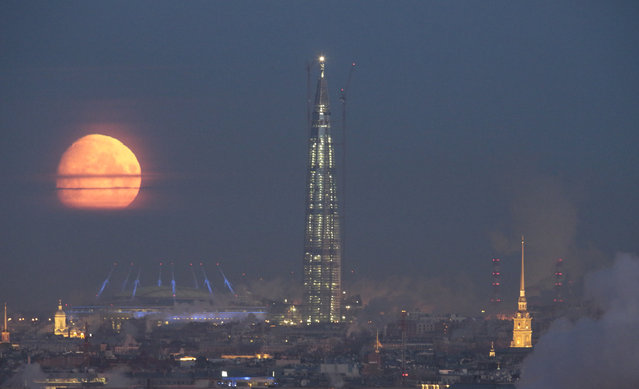 A general view shows the business tower Lakhta Centre (C), which is under construction, and the Saint Petersburg Stadium (L) during the sunrise in St. Petersburg, Russia on March 28, 2018. (Photo by Anton Vaganov/Reuters) 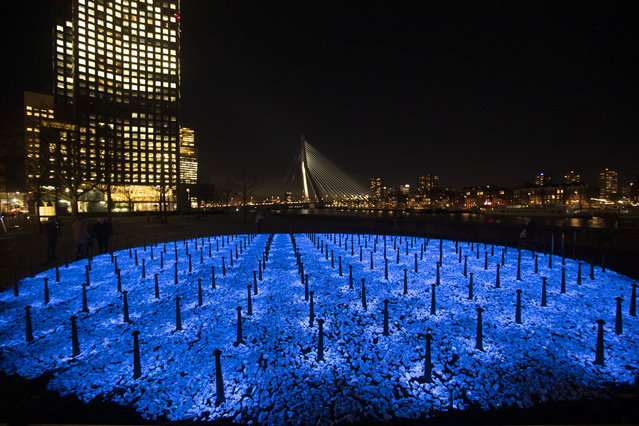 The monument Levenslicht, or Light of Life, by artist Daan Roosegaarde, consisting of 104,000 light-emitting stones for the number of Dutch Holocaust victims is unveiled in Rotterdam, Netherlands, Thursday, January 16, 2020, to mark the 75th anniversary, later this month, of the liberation of Auschwitz concentration and extermination camp. (Photo by Peter Dejong/AP Photo) 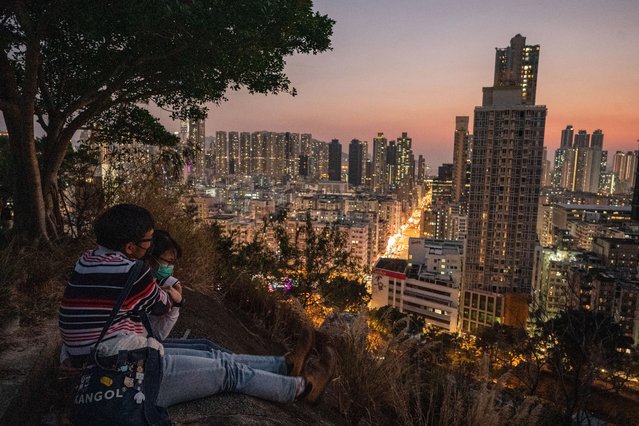 A couple wears face masks as they share a moment during sunset on January 31, 2020 in Hong Kong, China. With over 9800 confirmed cases of Novel coronavirus (2019-nCoV) around the world, the virus has so far claimed over 200 lives. (Photo by Anthony Kwan/Getty Images)
Edit Del
05 Feb 2020 00:03:00, post received 0 comments
Publication archive:
←   →
Popular tags:
All tags
Last searches: