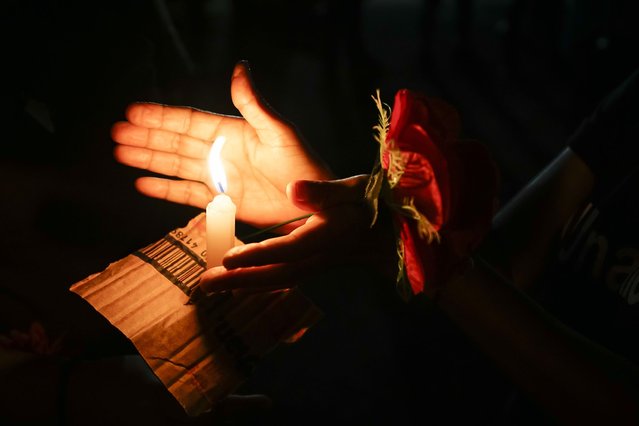 Salvadoran women participate in a vigil in memory of women victims of femicide in the commemoration of the International Day for the Elimination of Violence against Women, in San Salvador, capital of El Salvador on November 25, 2021. (Photo by Alex Pena/Anadolu Agency via Getty Images) 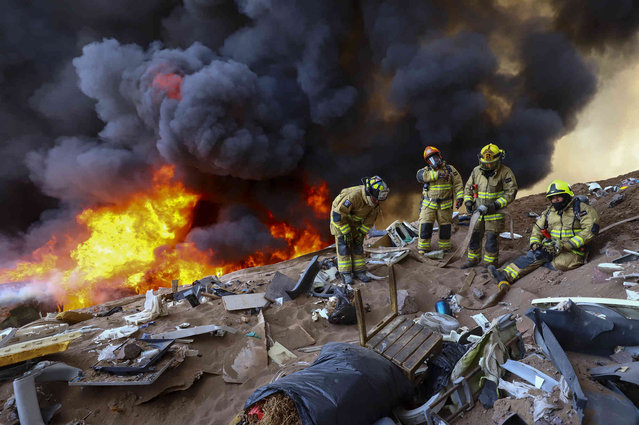 Firefighters wait for water during a fire in the low income neighborhood of Laguna Verde, in Iquique, Chile, Monday, January 10, 2022. According to authorities the fire destroyed close to 100 homes of the neighborhood which is populated mostly by migrants. (Photo by Ignacio Munoz)/AP Photo 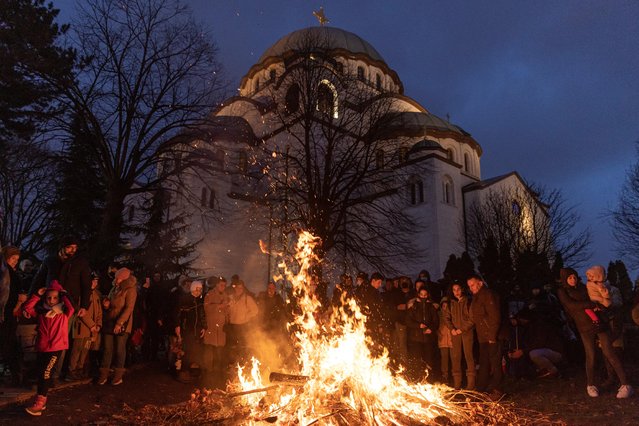 Believers burn dried oak branches, which symbolise the Yule log, on the Orthodox Christmas Eve in front of the Saint Sava temple in Belgrade, Serbia, January 6, 2022. Serbian Orthodox believers celebrate Christmas on January 7, according to the Julian calendar. (Photo by Marko Djurica/Reuters) 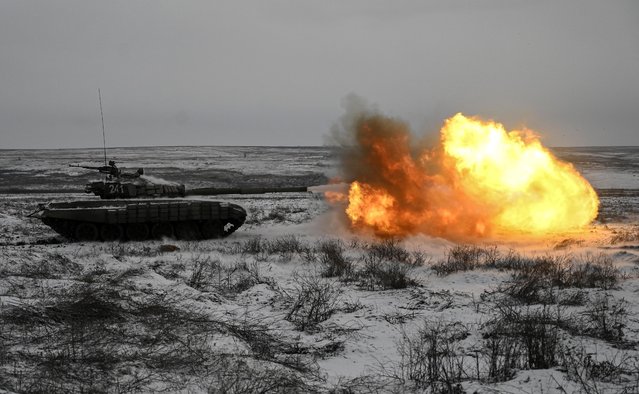 A Russian T-72B3 main battle tank fires during combat exercises at the Kadamovsky range in the southern Rostov region, Russia on January 12, 2022. (Photo by Sergey Pivovarov/Reuters) 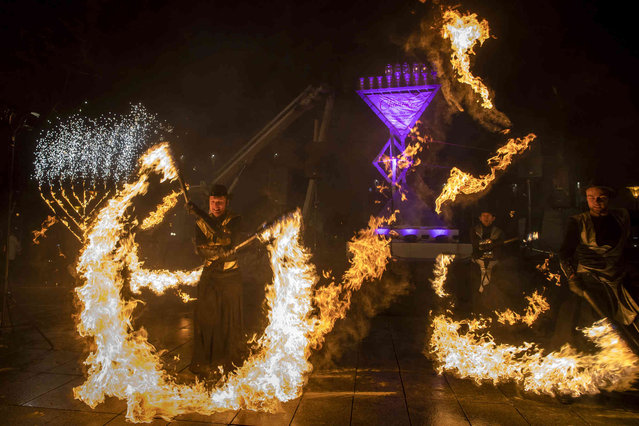 Fireshow artists perform during the Jewish holiday of Hanukkah at the Kudirkos square in Vilnius, Lithuania, Thursday, December 2, 2021. (Photo by Mindaugas Kulbis/AP Photo) 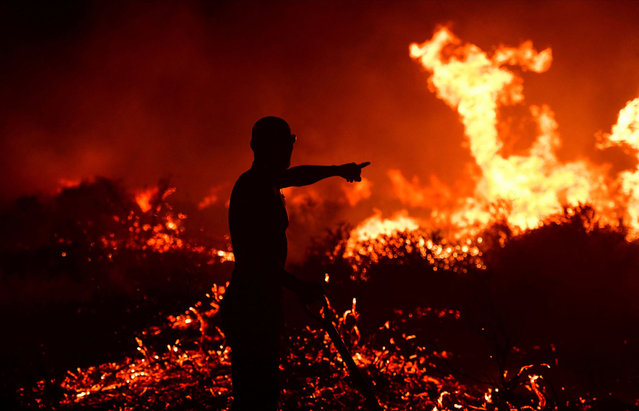 A firefighter points as he stands near flames from forest fires, near Puerto Madryn, Chubut, Argentina on January 3, 2022. (Photo by Maxi Jonas/Reuters) 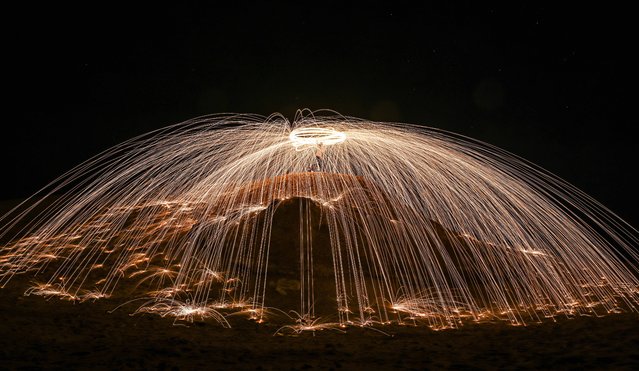 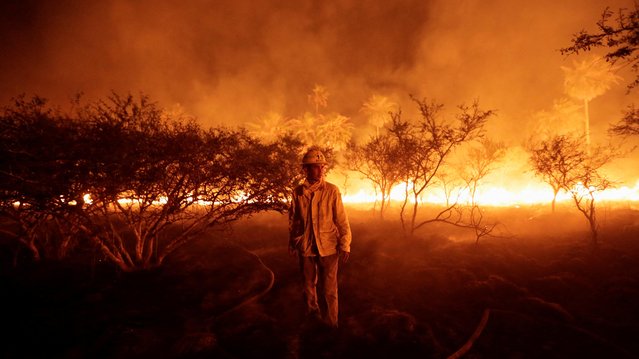 A firefighter stands amidst burning vegetation as he and his colleagues try to extinguish forest fires, in Surubi'y, Paraguay on January 10, 2022. (Photo by Cesar Olmedo/Reuters) More than 13,600 weapons are melted in Santiago, Chile, 11 November 2021. The Government of Chile held an event were some 13,600 firearms that were in the custody of the security forces after being seized in operations or voluntarily handed over by the citizens were made unusable. This operation, which is carried out annually, aims to 'reduce the circulation of weapons in the hands of criminals' and collaborate with the security of the citizenry, explained the country's President, Sebastian Pinera. (Photo by Alberto Valdes/EPA/EFE) 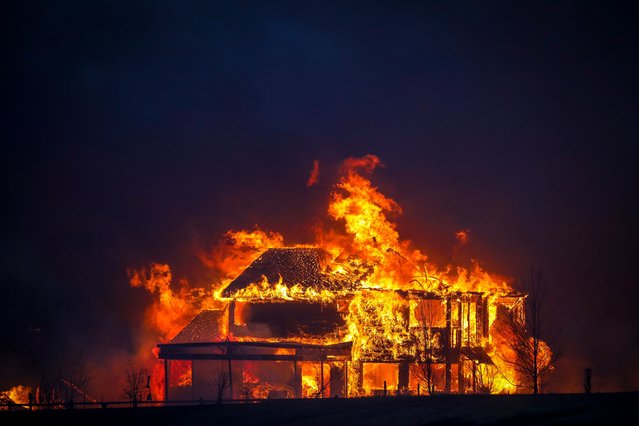 A home burns after a fast moving wildfire swept through the area in the Centennial Heights neighborhood of Louisville, Colorado on December 30, 2021. State officials estimated some 600 homes had already been lost in multiple areas around Boulder County and were fueled by winds that gusted upwards of 100 miles per hour at times during the day. (Photo by Marc Piscotty/Getty Images) 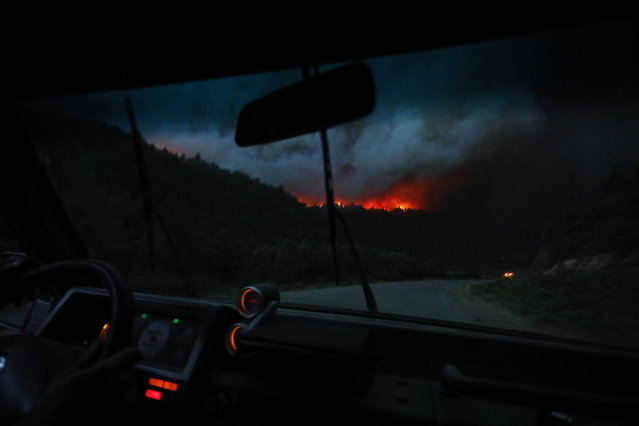 View of a huge fire from the Route 40 in Paraje Villegas, Rio Negro province, 70 km south of Bariloche, Argentina, on December 29, 2021. Several sources of fire have been active for weeks in the Argentine provinces of Neuquen, Rio Negro and Chubut (south), where the flames have consumed thousands of hectares of native forest, amid adverse weather conditions, according to the authorities. (Photo by Francisco Ramos Mejía/AFP Photo) 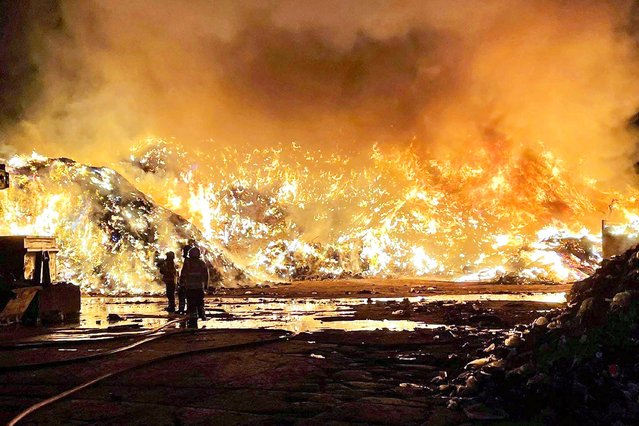 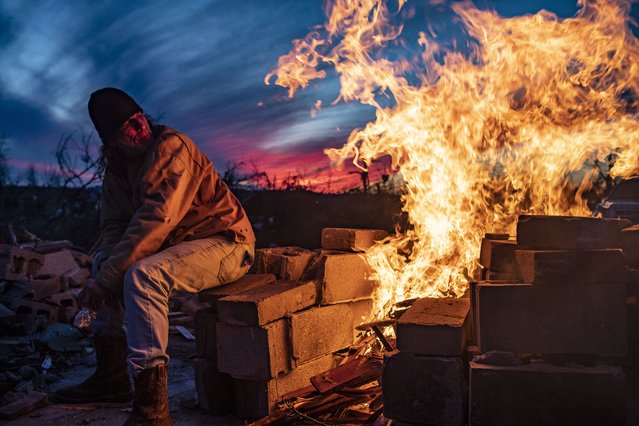 Thomas Shelby makes a fire as he prepares to stay the night by the rubble of his home to protect from potential looters in Dawson Springs, Kentucky, on Saturday, December 11, 2021. One or more tornados tore through Dawson Springs late last night. (Photo by Austin Anthony/The Washington Post) 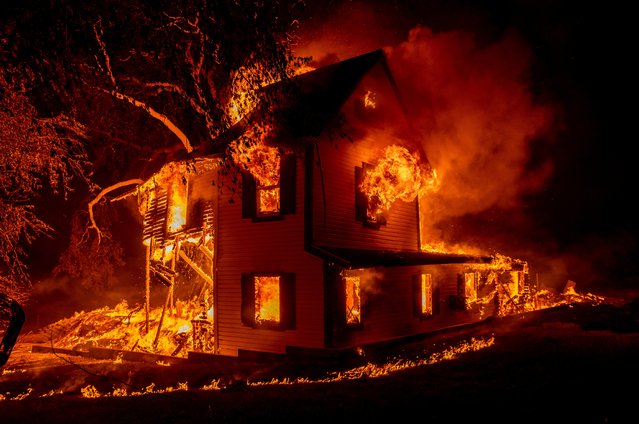 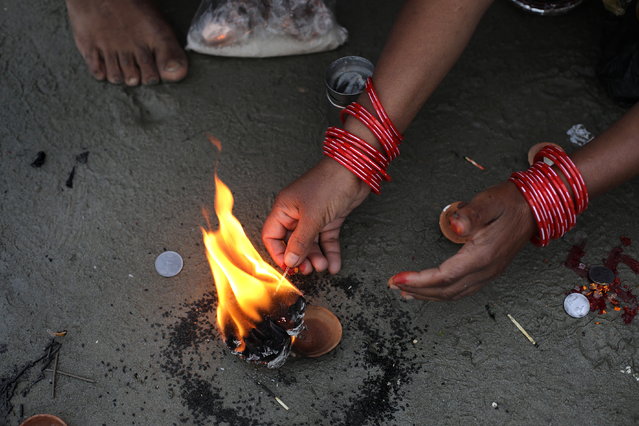