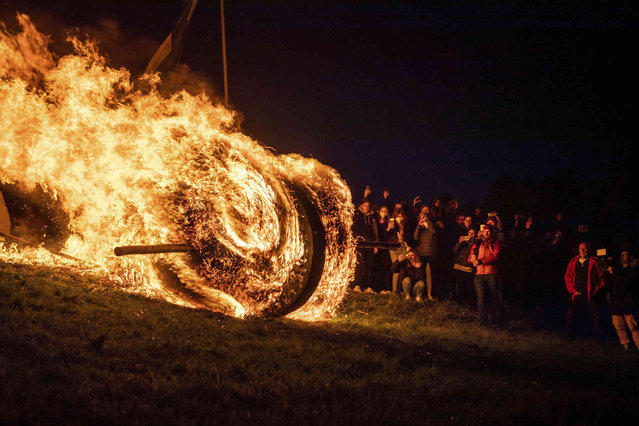 A burning Easter wheel “runs” down the hill in L'gde, North Rhine-Westphalia, Germany. When it is dark the straw in the wheels is lit and the wheels are pushed down the hill. The custom in L'gde is listed as an intangible cultural heritage of Germany by UNESCO. (Photo by Lino Mirgeler/dpa via AP Photo) 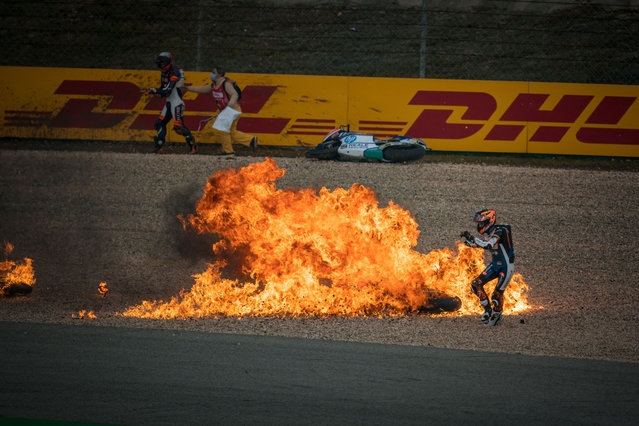 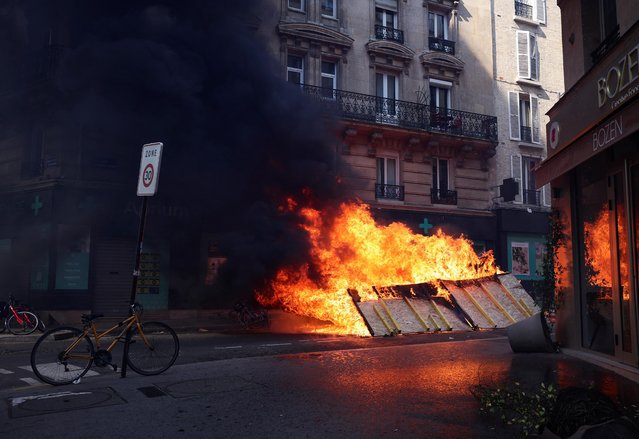 A fire of burning trash is seen during the traditional May Day labour union march in Paris, France, May 1, 2022. (Photo by Sarah Meyssonnier/Reuters) 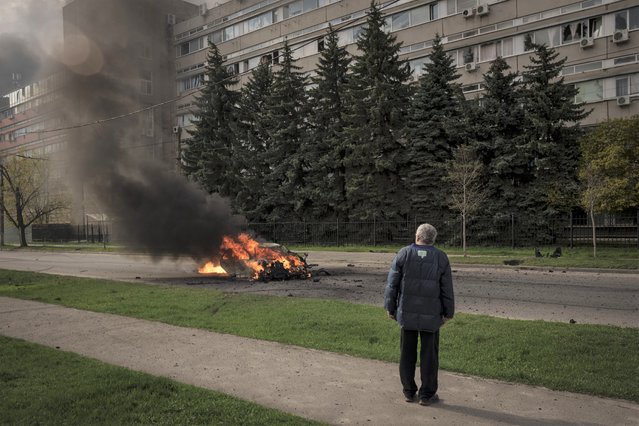 A man watches as a car burns with two people inside, after a Russian bombardment in Kharkiv, Ukraine, Thursday, April 21, 2022. (Photo by Felipe Dana/AP Photo) 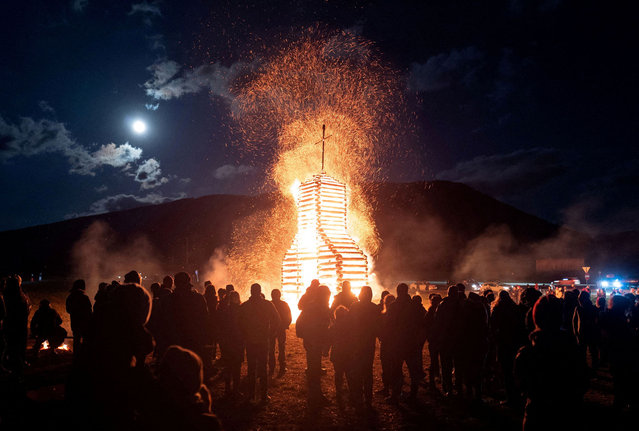 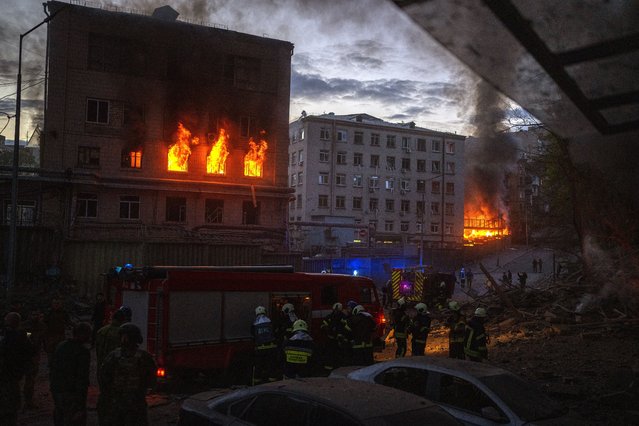 Emergency services work at the site where fires were triggered by an explosion in Kyiv, Ukraine, Thursday, April 28, 2022. Russia struck the Ukrainian capital of Kyiv shortly after a meeting between President Volodymyr Zelenskyy and U.N. Secretary-General António Guterres on Thursday evening. (Photo by Emilio Morenatti/AP Photo) 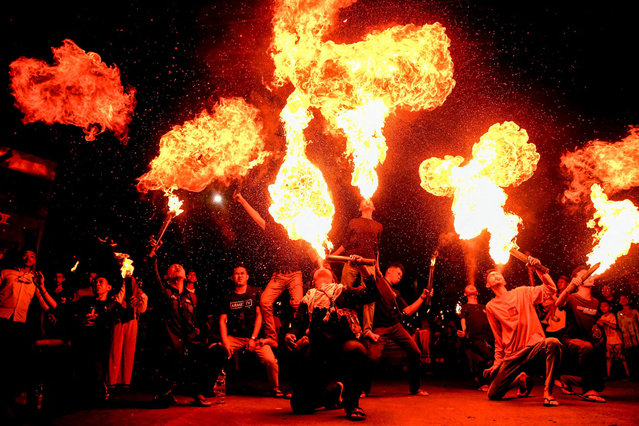 Performers display their skills as children and youth take part in a torch and lantern parade in Makassar, on May 1, 2022, while celebrating Eid al-Fitr that marks the end of the holy month of Ramadan. (Photo by Andri Saputra/AFP Photo) 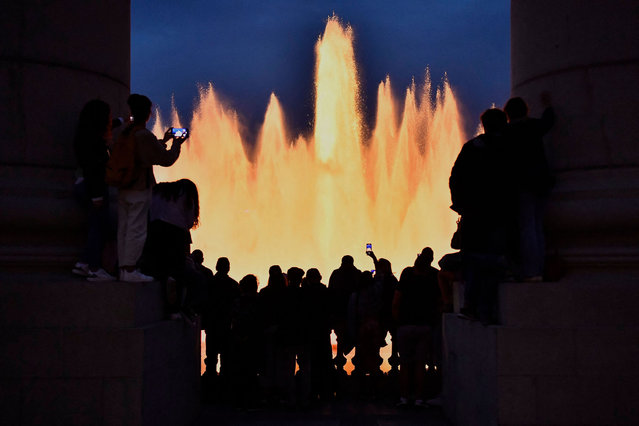 People gather to watch the Magic Fountain's lights and music show on April 30, 2022 in Barcelona. (Photo by Pau Barrena/AFP Photo) 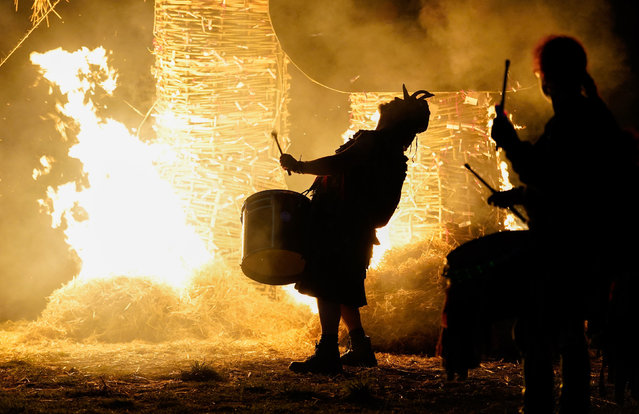 Members of the Pentacle Drummers perform in front of a burning wicker man during the Beltain Festival at Butser Ancient Farm, in Waterlooville, Hampshire on April 30, 2022. Beltain, or Beltane, is an ancient Celtic celebration to mark the beginning of summer and is centered around the story of the May Queen and the Green Man, and the lighting of the Beltane bonfire, symbolic of purification, healing and new life. (Photo by Andrew Matthews/PA Images via Getty Images) 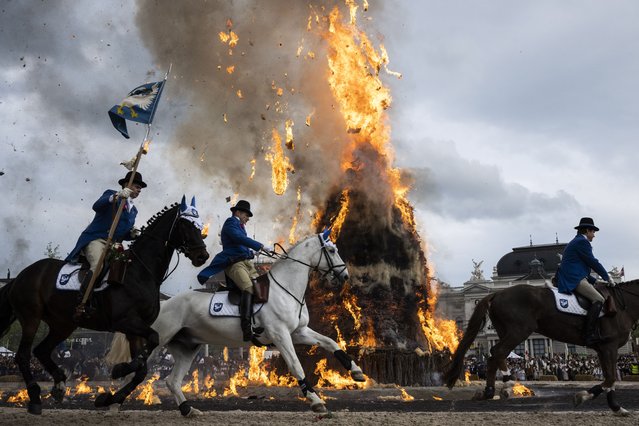 Members of guilds in historical uniforms parade on horseback past the burning “Boeoegg” figure on the Sechselaeuten place in Zurich, Switzerland, 25 April 2022. The Sechselaeuten (ringing of the six o'clock bells) is a traditional end of winter festival and the burning of the Boeoegg, a symbolic snowman, at 6 pm. The faster the Boeoegg explodes, the hotter the summer will be, according to traditional weather rules. (Photo by Ennio Leanza/EPA/EFE) 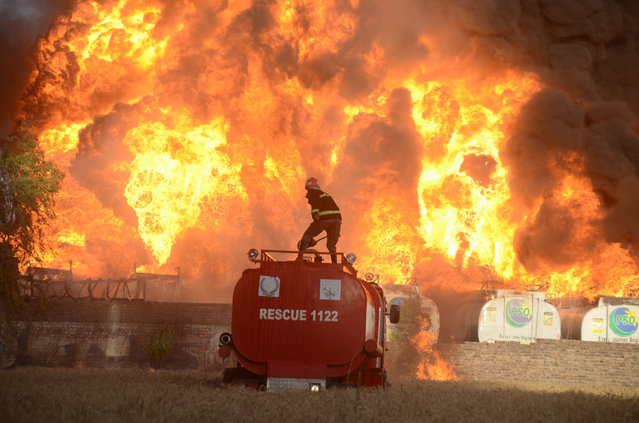 Firefighters try to extinguish the fire broke out at an oil tanker terminal in Nowshera, Pakistan on April 30, 2022. (Photo by Hussain Ali/Anadolu Agency via Getty Images) 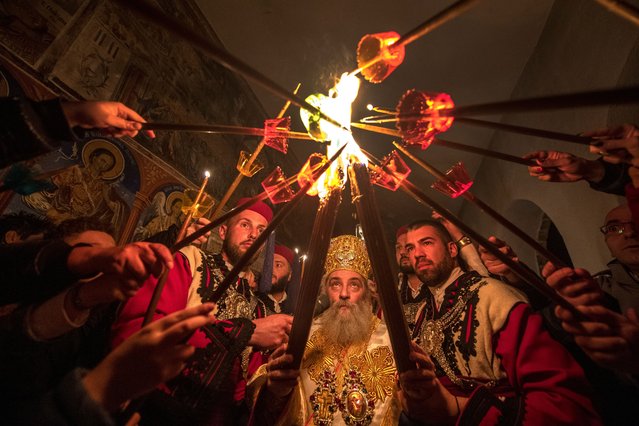 Orthodox pilgrims light candles from a torch burning with the Holy Fire from Jerusalem during the Orthodox Christian Easter service led by Bishop Partenie (C) at the 10th century monastery of St. John the Baptist “Sv. Jovan Bigorski” near Mavrovo, Republic of North Macedonia, 24 April 2022. (Photo by Georgi Licovski/EPA/EFE) 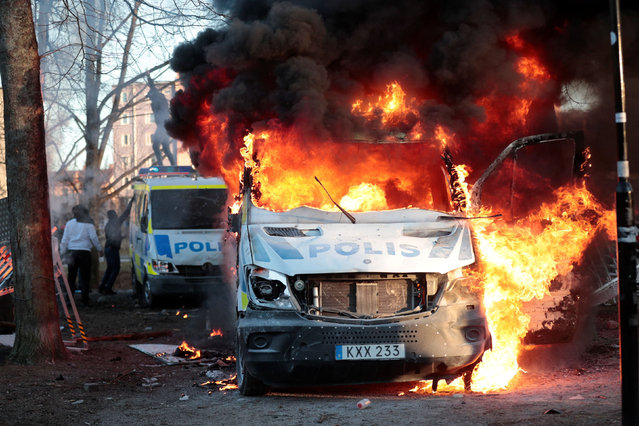 Police vans are on fire during a counter-protest in the park Sveaparken in Orebro, south-centre Sweden on April 15, 2022, where Danish far-right party Stram Kurs had permission for a square meeting on Good Friday. (Photo by Kicki Nilsson/TT News Agency/AFP Photo) 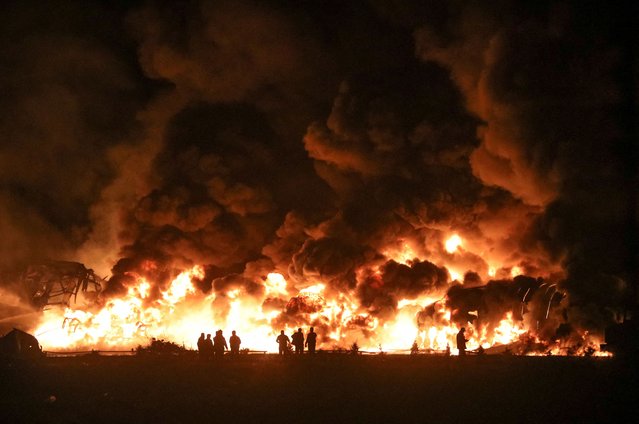 People watch the fire at the Industrial Park Azersun in the town of Sumgait, Azerbaijan April 28, 2022. (Photo by Aziz Karimov/Reuters) 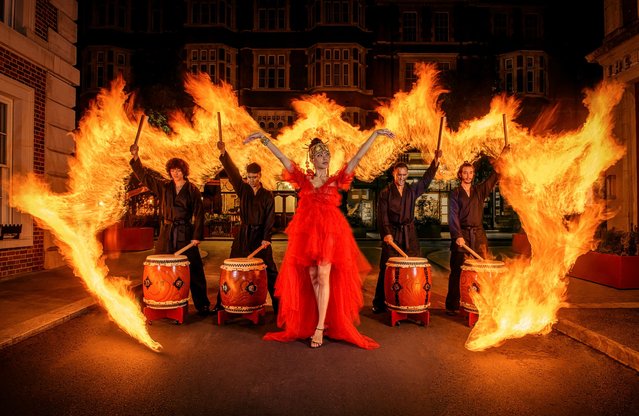 A fire show lit up Mayfair on May 10, 2022 to celebrate The Ivy Asia arriving at its newest central London location. Reservations have now opened for the new dining venue in North Audley Street ahead of its launch on May 31. (Photo by Handout via PA Wire Press Association)
Edit Del
25 Jun 2022 05:51:00, post received 0 comments
Publication archive:
←   →
Popular tags:
All tags
Last searches: