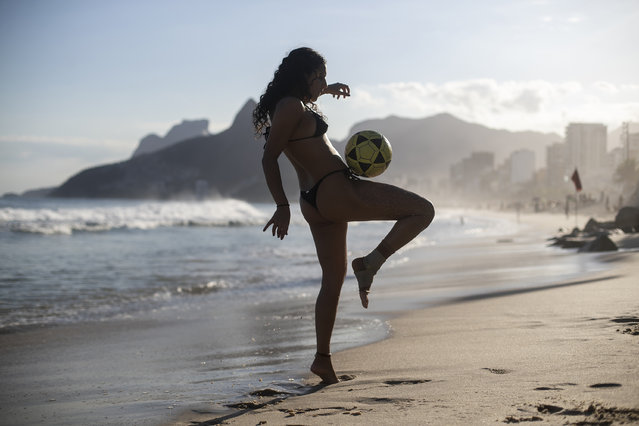 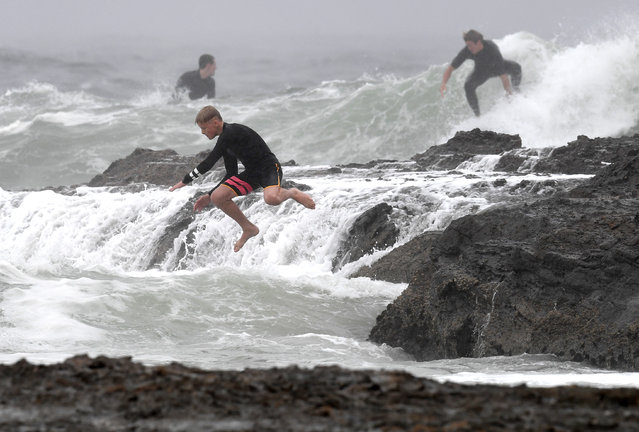 A surfer (C) jumps from the rocks into the surf at Snapper Rocks on the Gold Coast, Australia, 05 April 2021. The Bureau of Meteorology has cancelled a severe weather warning as a low weather system remains off the coast of Fraser Island, gale-force wind warnings remain in place for waters off the Sunshine Coast and Gold Coast. (Photo by Darren England/EPA/EFE) 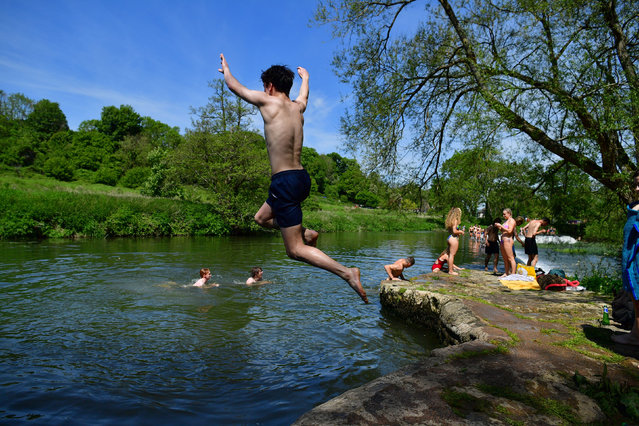 Swimmers dive into the water as they enjoy the hot weather at Warleigh Weir, Bath, United Kingdom on the first day of meteorological summer on Tuesday, June 1, 2021. (Photo by Ben Birchall/PA Images via Getty Images) 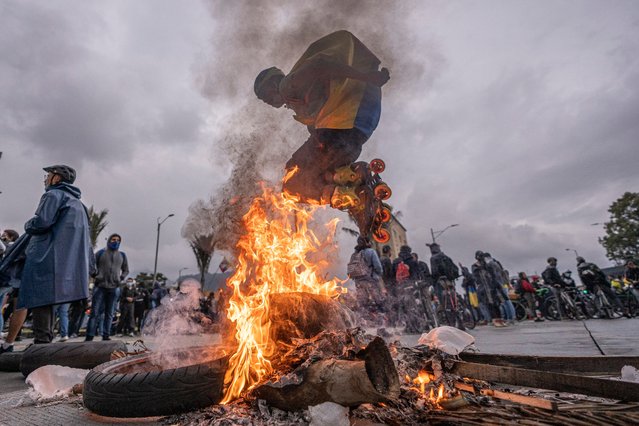 A demonstrator in roller skates wearing a Colombian flag on his back jumps over a bonfire during national strike on May 5, 2021 in Bogota, Colombia. Despite that the ruling party announced withdrawal of the unpopular bill for a tax reform and the resignation of the Minister of Finances, social unrest continues after a week. The United Nations human rights office (OHCHR) showed its concern and condemned the riot police repression. Ongoing protests take place in major cities since April 28. (Photo by Diego Cuevas/Getty Images) 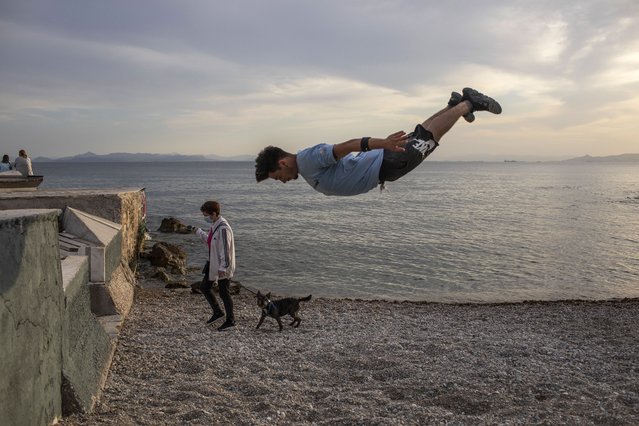 25 year-old Jimmakos Scotis makes a backflip as a woman wearing a protective face mask walks with her dog at the seaside of Alimos, suburb of Athens, on Tuesday, May 4, 2021. Greece began easing coronavirus-related restrictions with a view to opening to the vital tourism industry in the summer. (Photo by Petros Giannakouris/AP Photo) 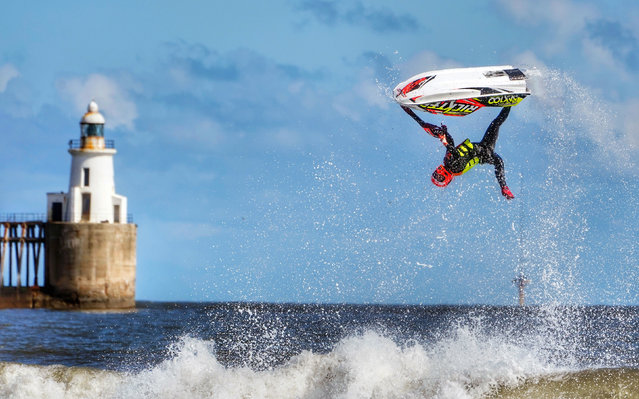 Ant Burgess practices his freestyle on a jet ski at Blyth beach in Northumberland, on the North East coast on Saturday, April 10, 2021. (Photo by Owen Humphreys/PA Images via Getty Images) 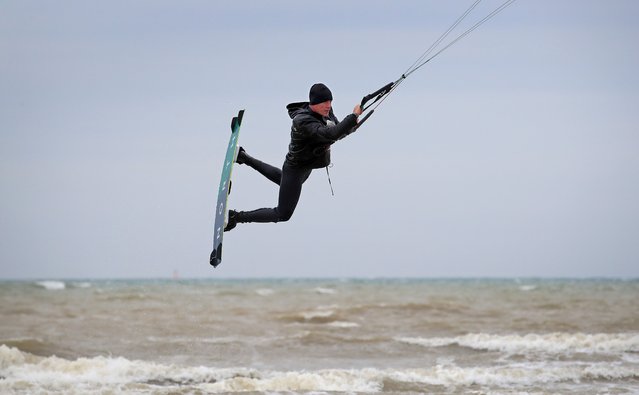 A kitesurfer enjoys the strengthening winds in Camber, East Sussex on Thursday, May 20, 2021. (Photo by Gareth Fuller/PA Images via Getty Images) 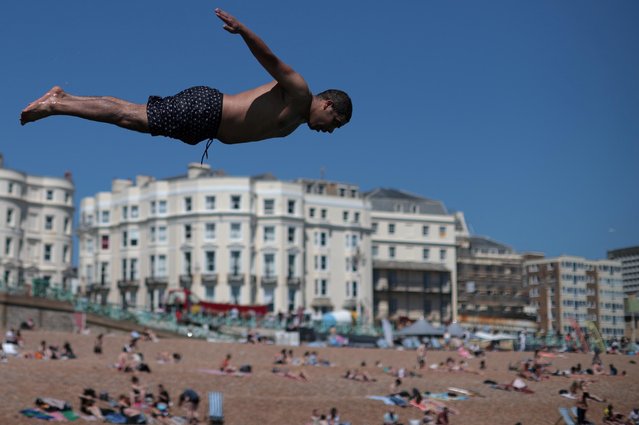 A man dives into the sea as people enjoy the hot weather on Brighton beach, in Brighton, Britain, June 1, 2021. (Photo by Hannah McKay/Reuters) 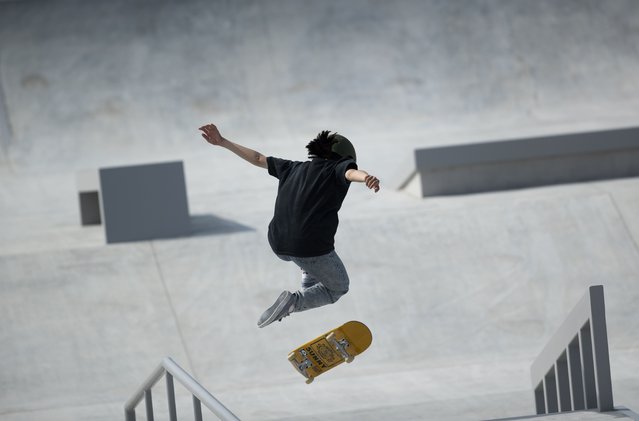 Japanese skateboarder Miyu Sasaki performs in the women's street competition during a test event at the venue for the Olympic Games, which has been rescheduled to start in July, in Tokyo, Friday, May 14, 2021. The event dubbed “Ready Steady Tokyo – Skateboarding” featured the sport that's included first time in the history of the Olympics. Only Japanese skateboarders participated in the test event. (Photo by Hiro Komae/AP Photo) 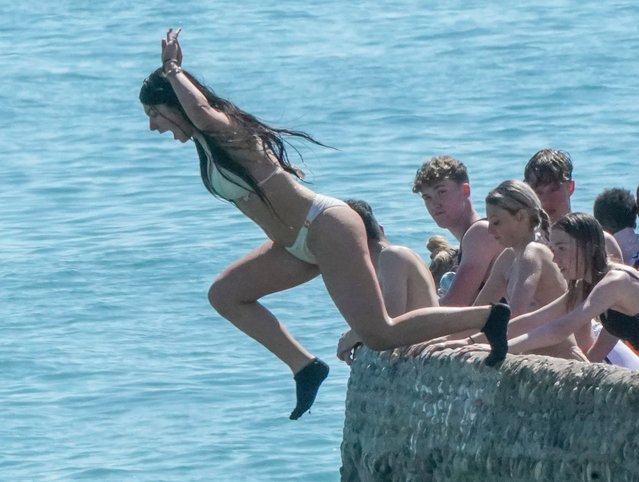 Holiday makers cool off by diving from the breakwaters on Brighton beach as thousands flock to the seaside to make the best of the Bank Holiday sunshine and celebrate the easing of lockdown on May 31, 2021 in Brighton, England. (Photo by Chris Eades/Getty Images) 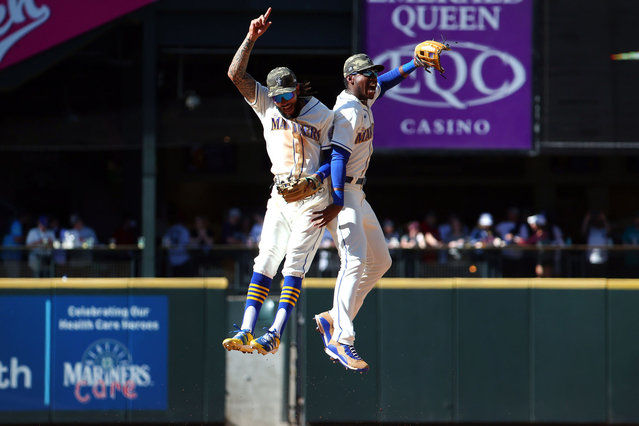 J.P. Crawford #3 (L) and Kyle Lewis #1 of the Seattle Mariners celebrate the 3-2 win against the Cleveland Indians at T-Mobile Park on May 16, 2021 in Seattle, Washington. (Photo by Abbie Parr/Getty Images) 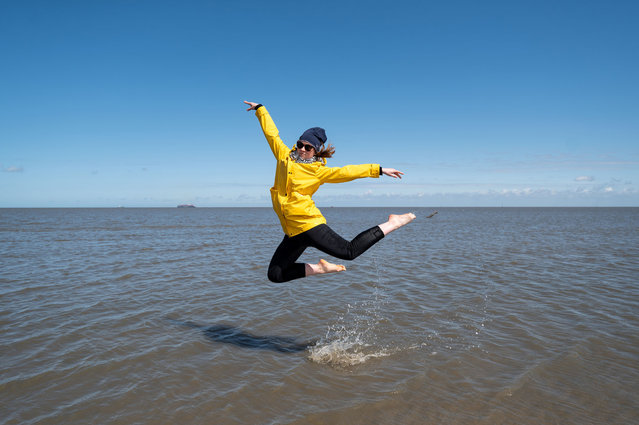 Tizia jumps at the beach following the ease of pandemic lockdown measures on May 23, 2021 in Cuxhaven-Duhnen, Germany. Authorities are easing lockdown measures across Germany, enabling restaurants to offer outdoor service, hotels to accommodate tourists, cultural institutions to perform and other activities to resume. Covid infection rates have been falling consistently and the national average is now below 75 per 100,000 over a seven-day period. Meanwhile the pace of vaccinations is climbing, with approximately 40% of the population having received a first dose. (Photo by David Hecker/Getty Images) 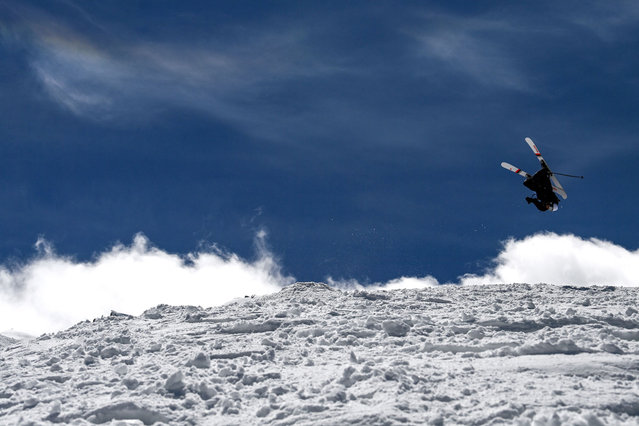 A skier jumps on a slope during the re-opening of the ski resort at Col de la Balme in La Clusaz, French Alps on May 23, 2021 as the country loosened Covid-19 restrictions. The ski resort of La Clusaz (Haute-Savoie) has reopened its lifts for two days, (Photo by Olivier Chassignole/AFP Photo) 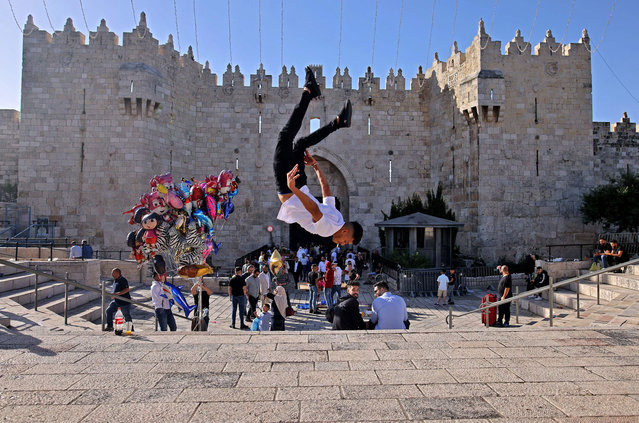 A Palestinian youth performs a jump outside the Damascus Gate in Jerusalem's Old City on May 13, 2021 during Eid al-Fitr, which marks the end of the holy fasting month of Ramadan. (Photo by Ahmad Gharabli/AFP Photo) 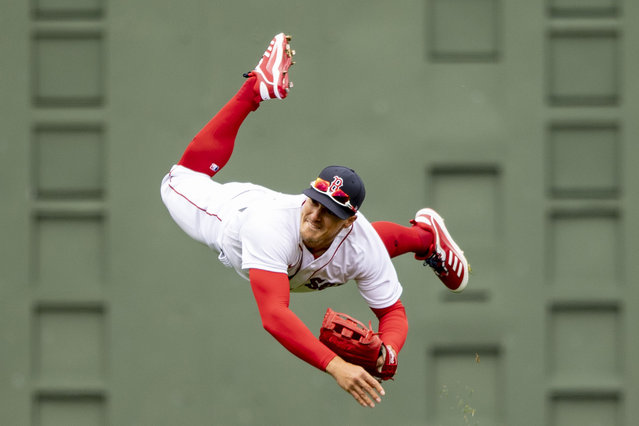