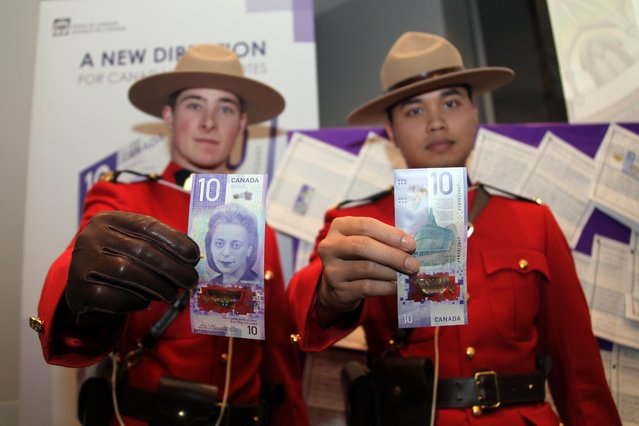 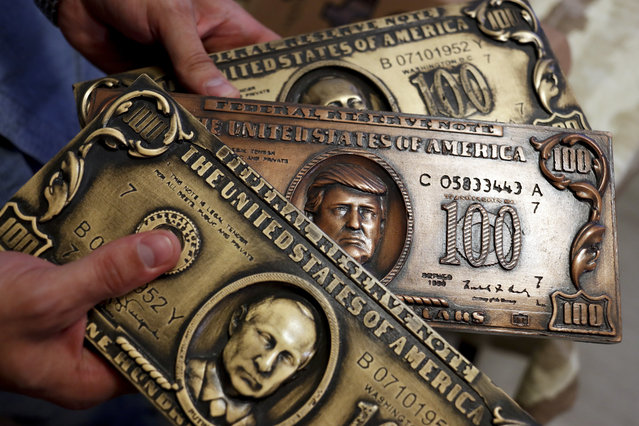 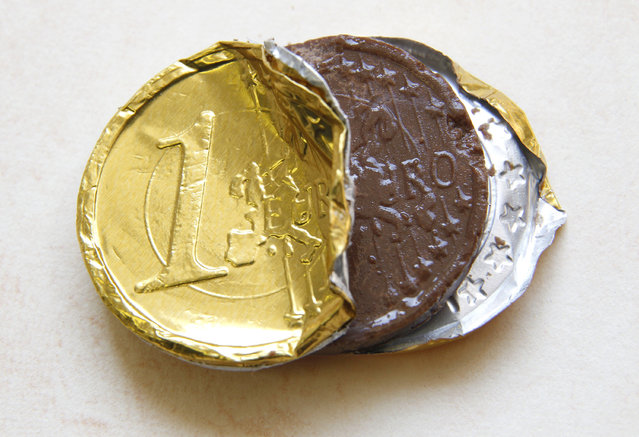 A one Euro coin made of chocolate is displayed in this photo illustration taken in Ljubljana September 11, 2012. (Photo by Srdjan Zivulovic/Reuters) 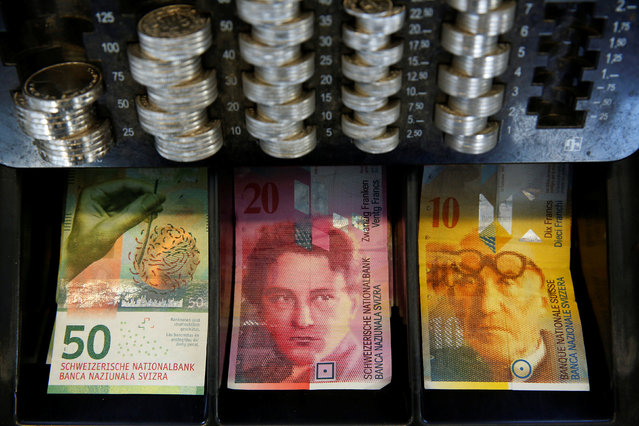 The new 50 Swiss Franc note is seen at a market stall after its release by the Swiss National Bank (SNB) in Bern, Switzerland April 12, 2016. (Photo by Ruben Sprich/Reuters) 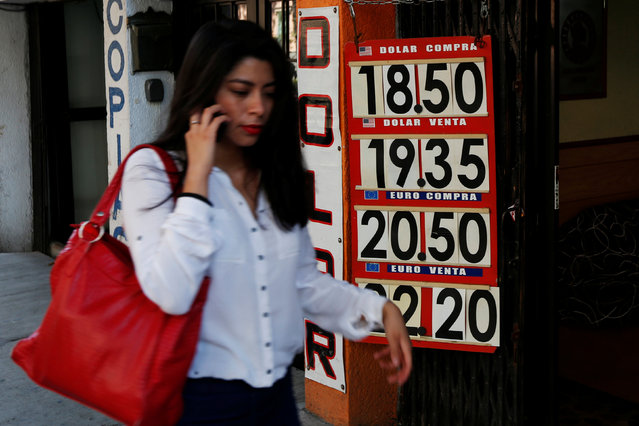 A woman walks in front a board displaying the exchange rate for Mexican peso and U.S. dollar at a foreign exchange house in Mexico City, Mexico March 1, 2017. (Photo by Carlos Jasso/Reuters) 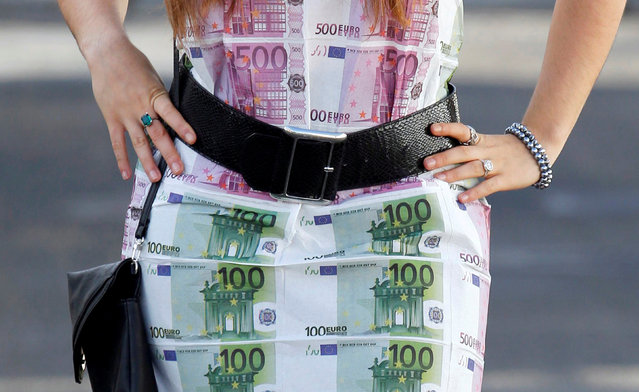 A woman wears a home-made dress featuring imitation 100 and 500 euro notes as she walks in Bordeaux, southwestern France, November 7, 2014. (Photo by Regis Duvignau/Reuters) 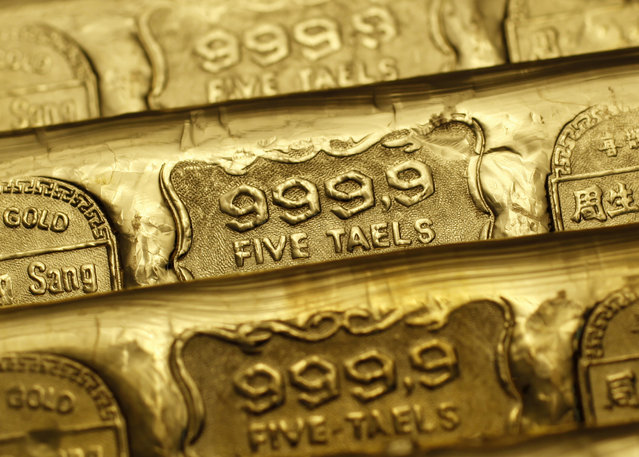 Five-tael (6.65 ounces or 190 grams) gold bars are seen at a jewellery store in Hong Kong in this August 11, 2011 illustration photo. (Photo by Bobby Yip/Reuters) 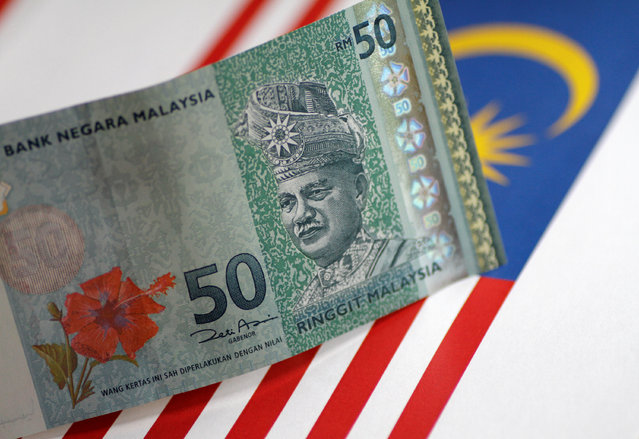 A Malaysia Ringgit note is seen in this illustration photo June 1, 2017. (Photo by Thomas White/Reuters) 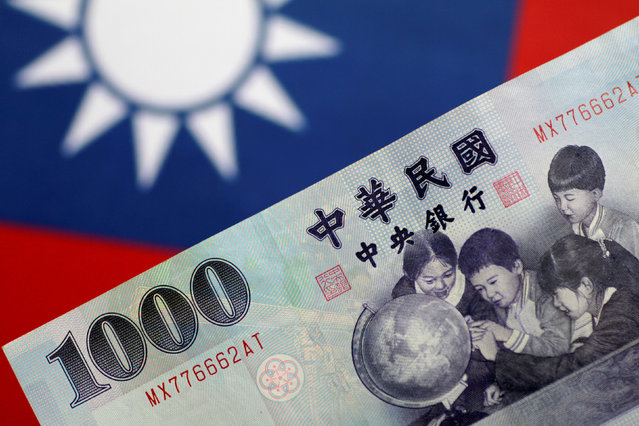 A Taiwan dollar note is seen in this illustration photo May 31, 2017. (Photo by Thomas White/Reuters) 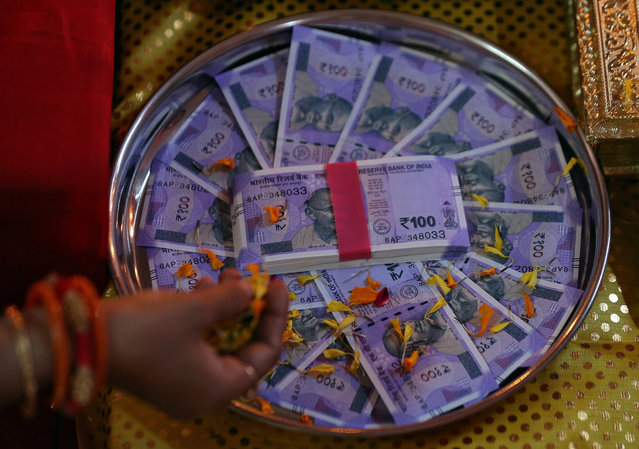 A woman puts flower petals on the new 100 Indian rupee notes as she prays as part of a ritual during Dhanteras, a Hindu festival associated with Lakshmi, the goddess of wealth, in Ahmedabad,November 5, 2018. (Photo by Amit Dave/Reuters) 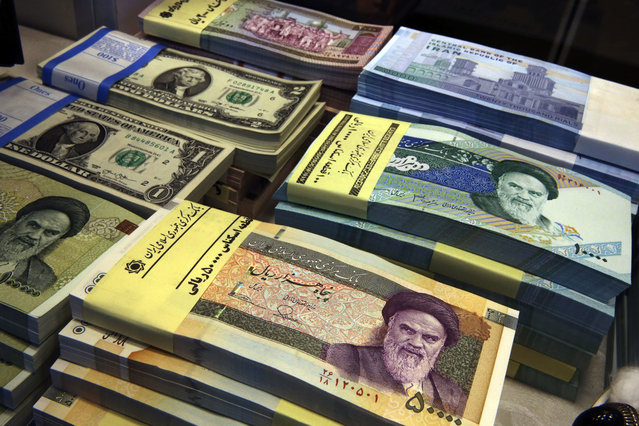 In this April 4, 2015 file photo, Iranian and U.S. banknotes are on display at a currency exchange shop in downtown Tehran, Iran. Iran's currency is continuing its downward spiral as increased American sanctions loom, hitting a new low on the thriving black market exchange. The Iranian rial fell to 112,000 to the dollar on Sunday, July 29, 2018, from 98,000 to $1 on Saturday. (Photo by Vahid Salemi/AP Photo) 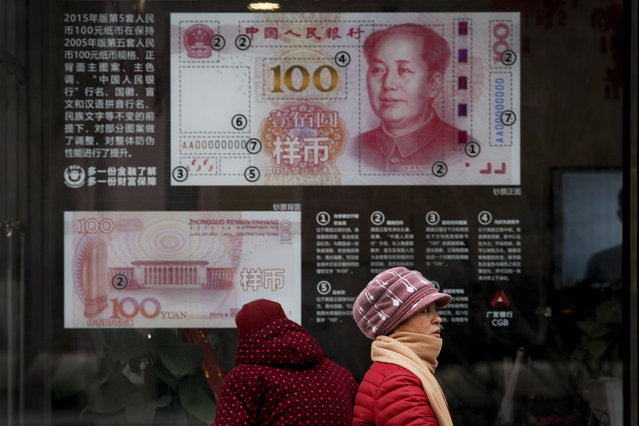 In a Monday, February 18, 2019 file photo, women walk by a bank window panel displaying the security markers on the latest 100 Yuan notes in Beijing. The Trump administration has again decided not to label China or any other country as a currency manipulator. But in a report to Congress, the administration is keeping China on a list of countries whose trade surpluses with the United States and other indicators are closely tracked. (Photo by Andy Wong/AP Photo/File) 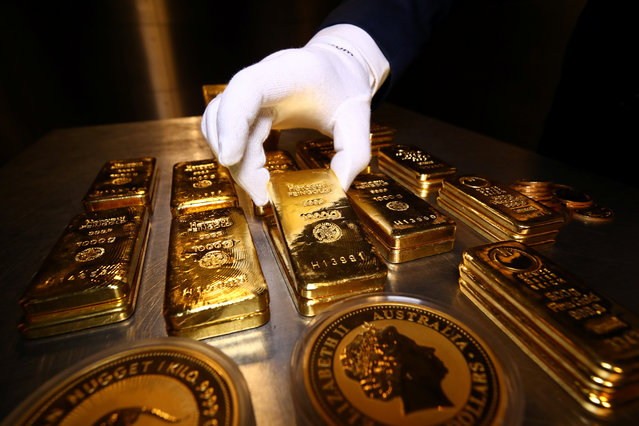 Gold bars and coins are stacked in the safe deposit boxes room of the Pro Aurum gold house in Munich, Germany, August 14, 2019. (Photo by Michael Dalder/Reuters) 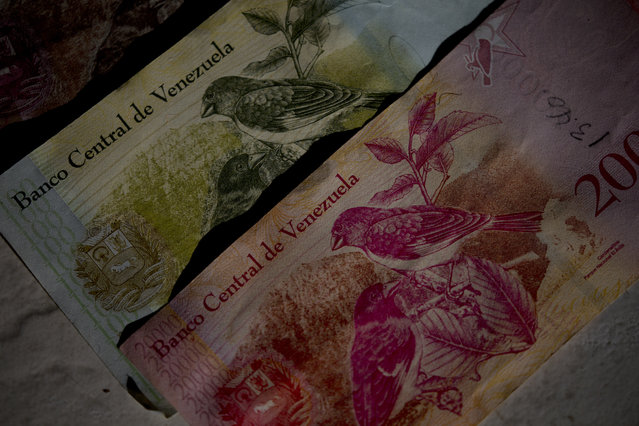 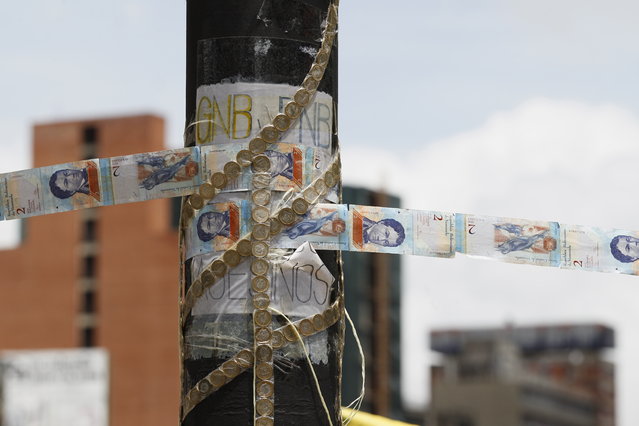 In this July 20, 2017 file photo, devalued Bolivar bank notes and coins, taped together, serve as makeshift rope at a roadblock set up by anti-government protesters in Caracas, Venezuela. The Venezuelan government presented to the Constitutional Assembly on Thursday, August 2, 2018, a decree that would make all operations at foreign exchange houses legal again. (Photo by Ariana Cubillos/AP Photo) 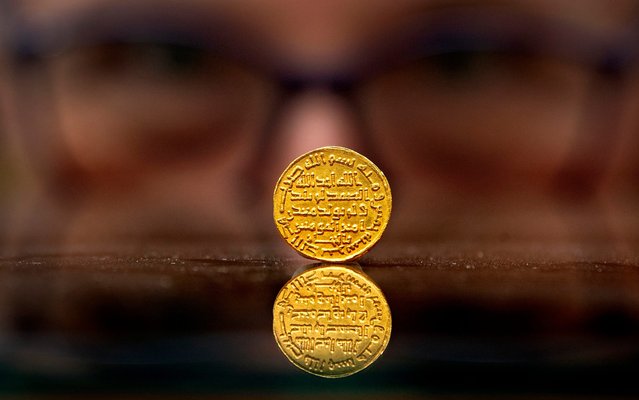 A member of staff at Morton & Eden holds an extremely rare early Islamic gold coin on Thursday September 12, 2019, which is expected to fetch £1.4m at auction in London. Measuring a 20mm across, about the size of a modern £1 piece, it is one of the world's rarest and most treasured Islamic gold coins from the first dynasty of Islam, the Umayyad gold dinar dated 105h (723AD). (Photo by Victoria Jones/PA Images via Getty Images)
Edit Del
14 Sep 2019 00:01:00, post received 0 comments
Publication archive:
←   →
Popular tags:
All tags
Last searches: