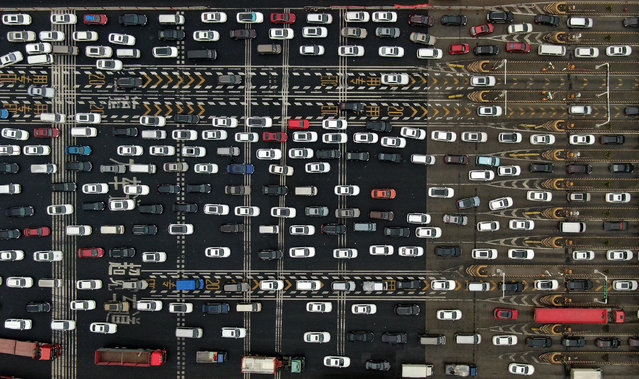 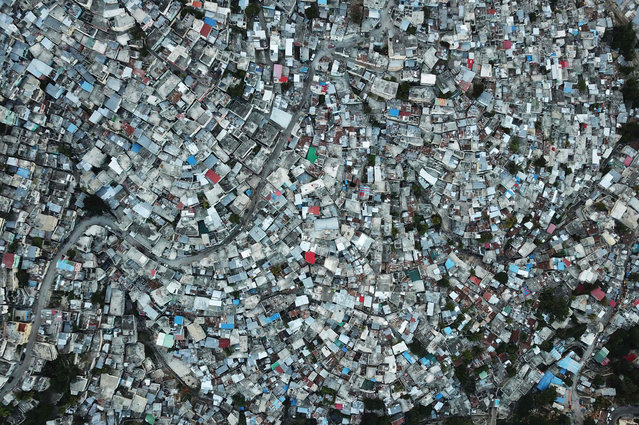 General view of the high density of houses in the neighborhood of Jalousie, in the commune of Petion Ville, Port-au-Prince, on December 16, 2018. On the hills of Port-au-Prince, a chaotic jumble of structures stretches ever farther into the distance: Haiti's capital is suffering under the weight of high inflation, endemic corruption and a perilous drop in the value of its currency. Jalousie is a poor neighborhood of the capital which lacks sanitation and potable water. (Photo by Héctor Retamal/AFP Photo) 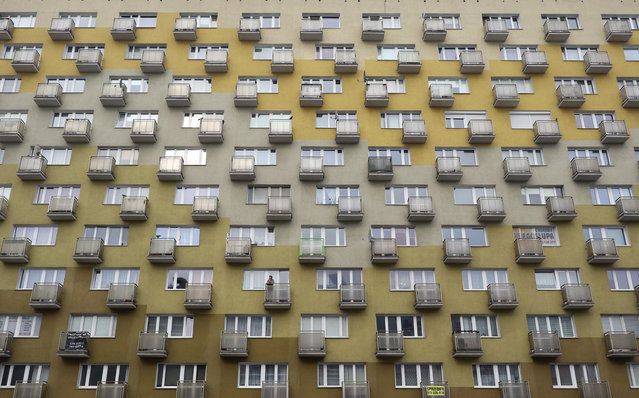 A woman smokes a cigarette as she looks out from her apartment balcony in Gdynia, Poland, April 28, 2017. (Photo by Russell Boyce/Reuters) 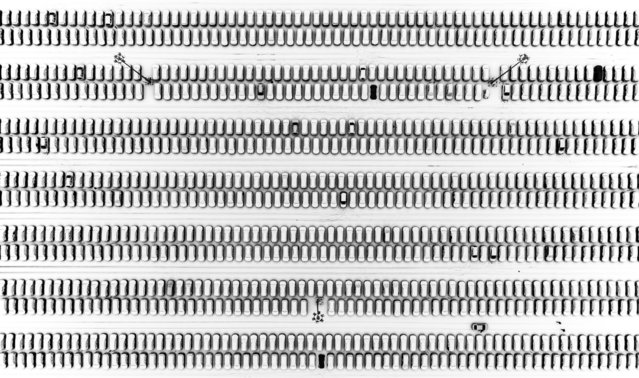 Rows of parked cars are covered by the first snowfall are seen at a shopping center in Moscow, Russia, Wednesday, November 28, 2018. Temperatures dipped to -6 C (21 F) in Moscow and -10 C (14 F) at night. (Photo by Dmitry Serebryako/AP Photov) 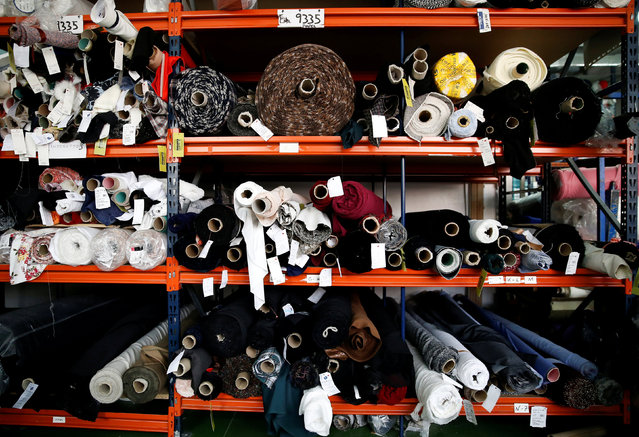 Fabric rolls are stored in a textile factory in Madrid, Spain May 19, 2014. (Photo by Andrea Comas/Reuters) 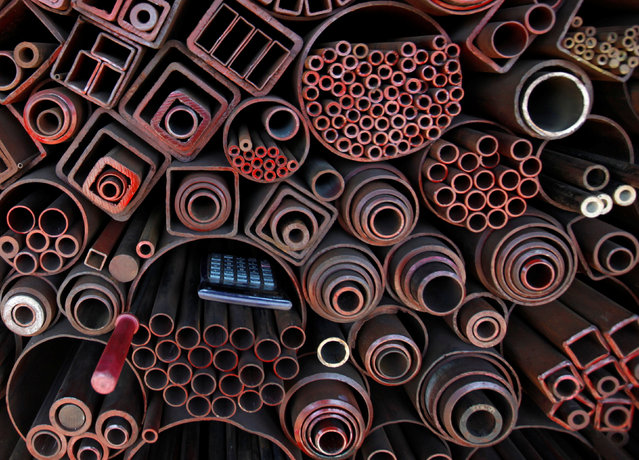 A pocket calculator is seen on steel products at a steel works in Seoul October 23, 2012. (Photo by Kim Hong-Ji/Reuters) 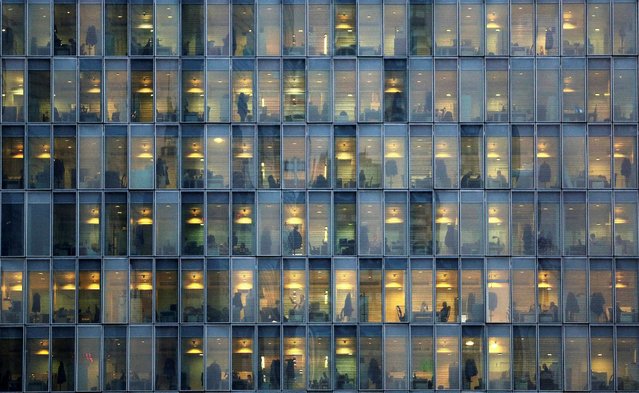 Lights are on as people work in an office building in Milan, Italy, February 17, 2015. (Photo by Stefano Rellandini/Reuters) 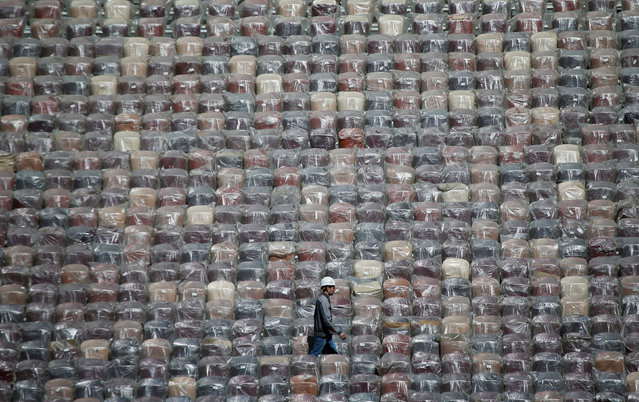 A construction worker walks along the tribune of the Luzhniki Stadium in Moscow, Russia May 6, 2017. (Photo by Maxim Shemetov/Reuters) 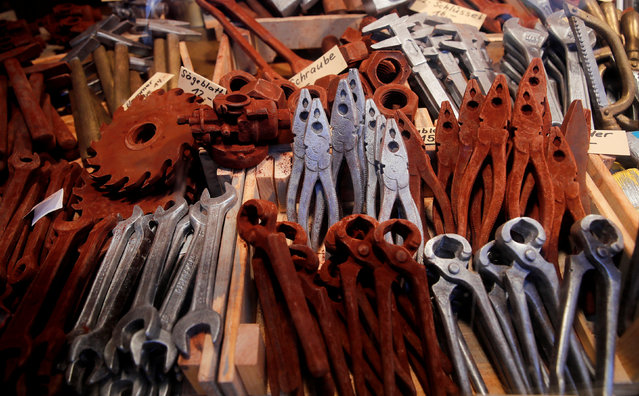 Tools made from chocolate are offered at a stall on the Christmas market in front of Einsiedeln Abbey in Einsiedeln, Switzerland December 3, 2017. (Photo by Arnd Wiegmann/Reuters) 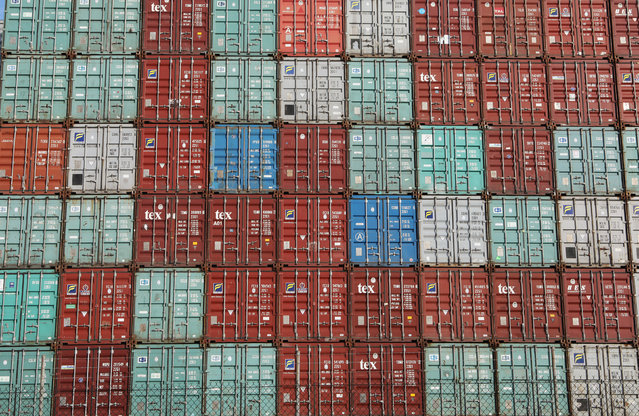 Containers are piled up at Port Botany facilities in Sydney Australia, February 6, 2018. (Photo by Daniel Munoz/Reuters) 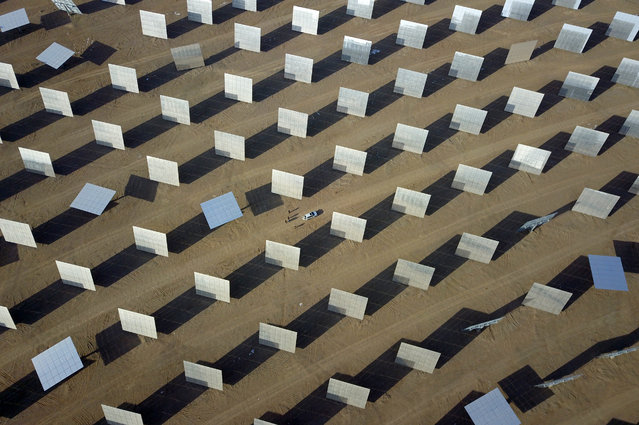 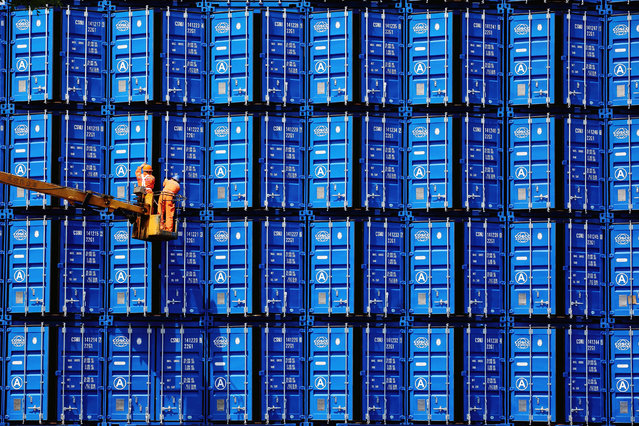 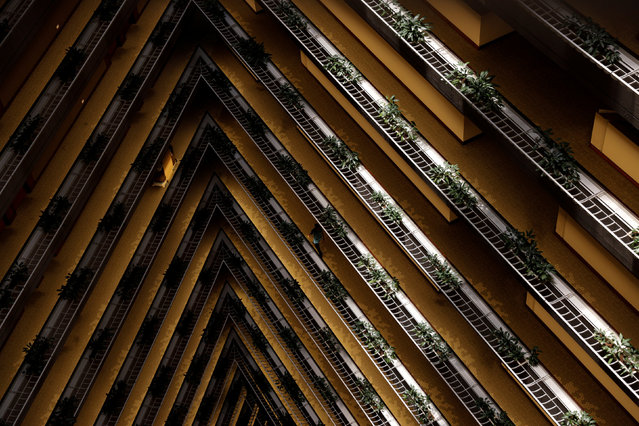 An attendant walks along a corridor at the Pan Pacific Hotel in Singapore September 12, 2018. (Photo by Edgar Su/Reuters) 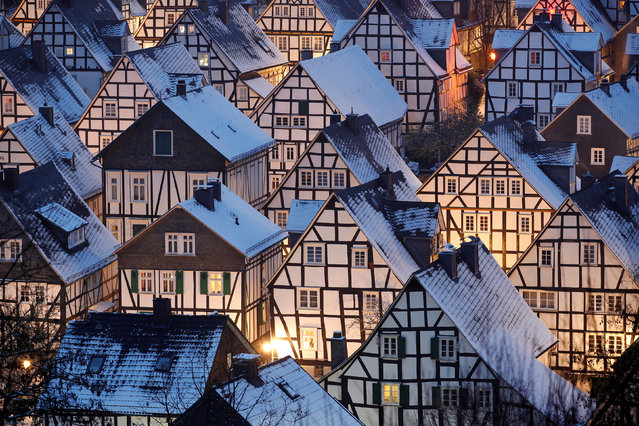 Snow covers the roofs of the so-called “Alter Flecken” (old spot), the historic core of downtown Freudenberg with its half-timbered houses from the 17th century in the heart of the federal state of North Rhine-Westphalia near the city of Siegen, Germany, December 16, 2018. (Photo by Wolfgang Rattay/Reuters) 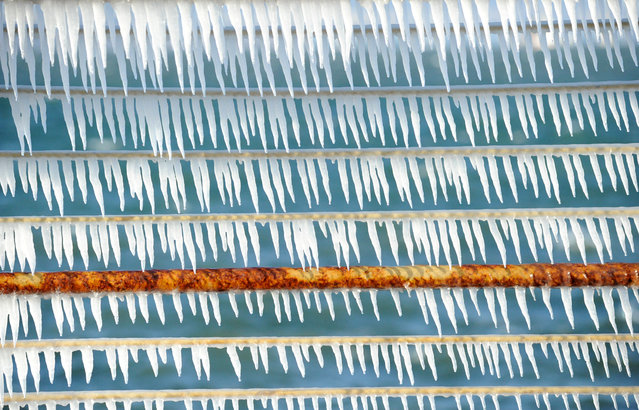 Icicles are seen on a handrail along the coast at Donggang business district in Dalian, Liaoning province, China on December 27, 2018. (Photo by Reuters/China Stringer Network) 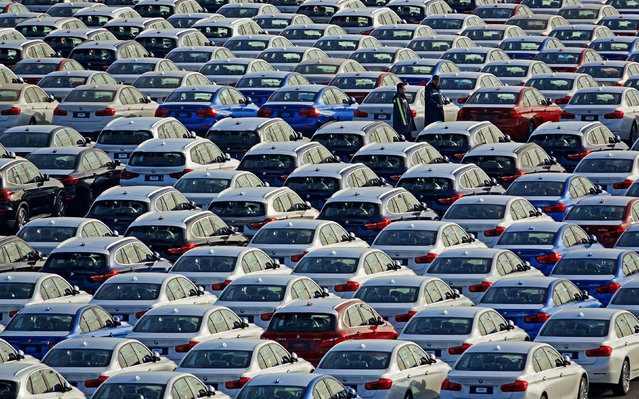 BMW cars are seen at the automobile terminal in the port of Dalian, Liaoning province, China January 9, 2019. (Photo by Reuters/China Stringer Network) 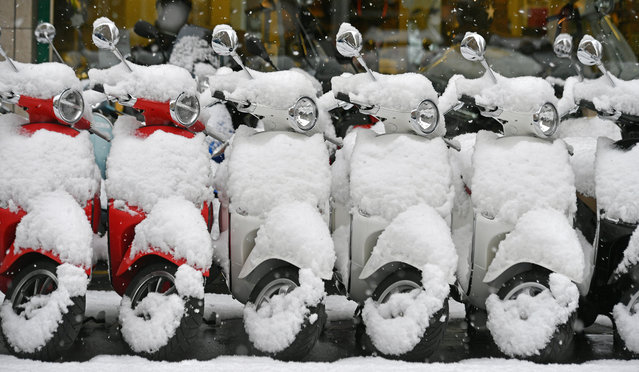 Vespas are covered with snow on a street in Zurich, Switzerland, 10 January 2019. Media reports state that many regions in Austria, Germany, Switzerland and northern Italy have been affected by heavy snowfalls in the last days. Weather forecasts warn that the snowstorms could cause roadblocks and increased avalanche danger in many parts of the affected regions. (Photo by Walter Bieri/EPA/EFE) 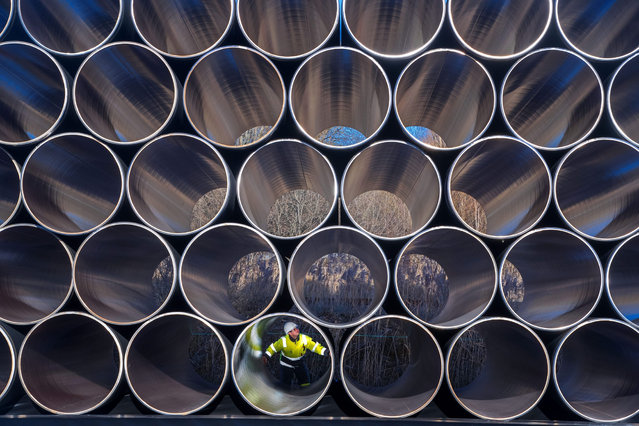 A worker inspects stacks of pipes weighing several tons each which will be used for the construction of the Nord Stream gas pipeline in the Sassnitz-Mukran harbour in northeastern Germany, 06 December 2016. The first sections of the 1,200 kilometer pipeline were delivered in late October 2016. Around 2,000 of a total 90,000 steal pipe components are currently being stored on the island of Ruegen. According to the Gazprom subsidiary Nord Stream 2 AG, the assembly works will begin in mid-2017. So far the political controversial pipeline, which will have a total capacity of some 55 billion cubic meters, has not recieved building permission. (Photo by Jens Buettner/EPA) 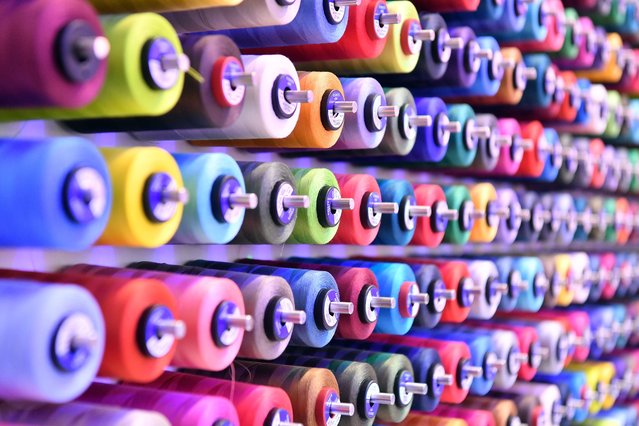 Colorful yarn for an alteration shop at Bergans of Norway exhibition stand at ISPO 2018 in Munich, Germany, 28 January 2018. More than 2,700 exhibitors from 120 countries showcase their latest products in the categories outdoor, ski, action, fashion, performance sports, health & fitness and sourcing at the trade fair. (Photo by Joerg Koch/EPA/EFE) 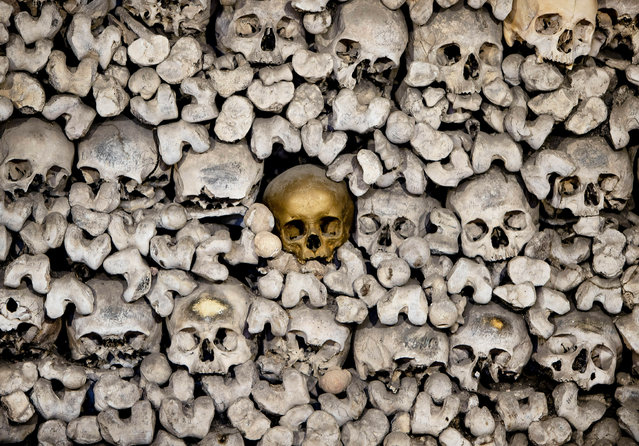