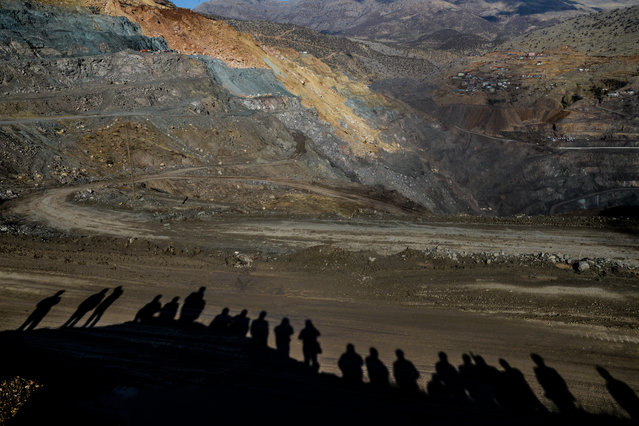 The shadows of relatives of miners are cast on the ground as they wait, while rescue workers search for trapped miners on November 18, 2016 at the accident site in the southeastern Siirt province. Turkish rescue workers were on November 18 battling to save 13 miners trapped after the collapse of a copper mine already confirmed to have left at least three dead. (Photo by Ilyas Akengin/AFP Photo) 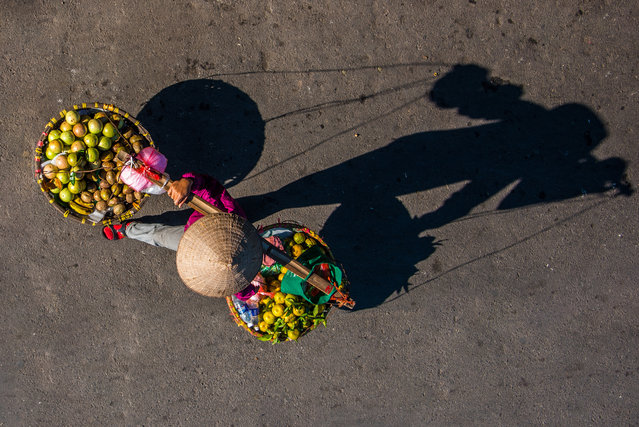 The photographer said each streetseller spent lots of time perfecting the arrangement of their goods in Vietnam, Hanoi, December 2016. Simplistic aerial views reveal the subtle beauty of Hanoi’s mobile street sellers. Photographer Claudio Sieber spent many hours on bridges across Hanoi, Vietnam to find the perfect spot to capture the vibrant colours and wares of local street sellers. Some of the streetsellers use their bikes as a mobile kitchen, preparing fresh meals on the spot, while others offer coffee, vegetables and flowers. (Photo by Claudio Sieber/Barcroft Images) 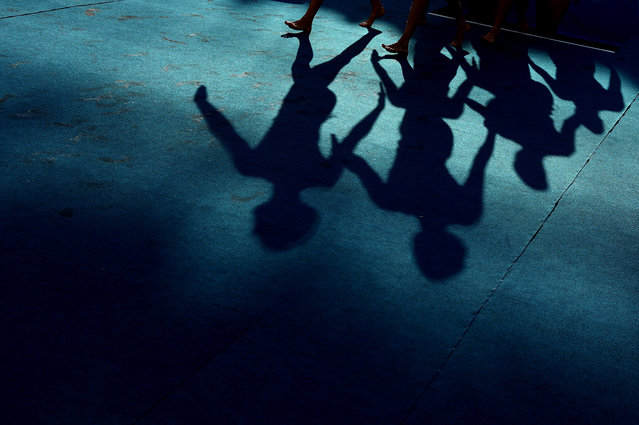 The United States of America pratice prior to the Synchronised Swimming Team Technical, preliminary round on day three of the Budapest 2017 FINA World Championships on July 16, 2017 in Budapest, Hungary. (Photo by Clive Rose/Getty Images) 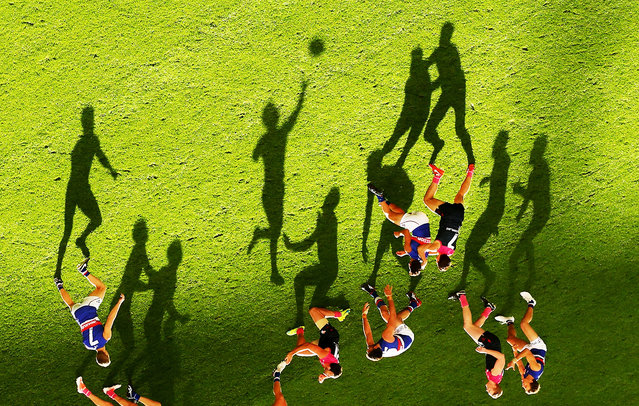 Long shadows are cast by players as Mitch Wallis of the Bulldogs passes the ball during the 2016 AFL Round 08 match between the Melbourne Demons and the Western Bulldogs at the Melbourne Cricket Ground, Melbourne on May 15, 2016. (Photo by Scott Barbour/AFL Media/Getty Images) 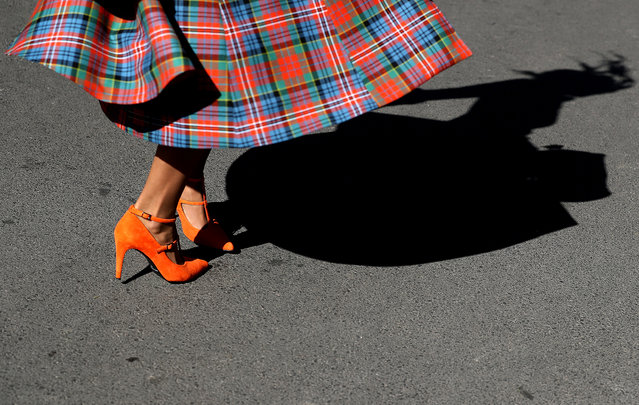 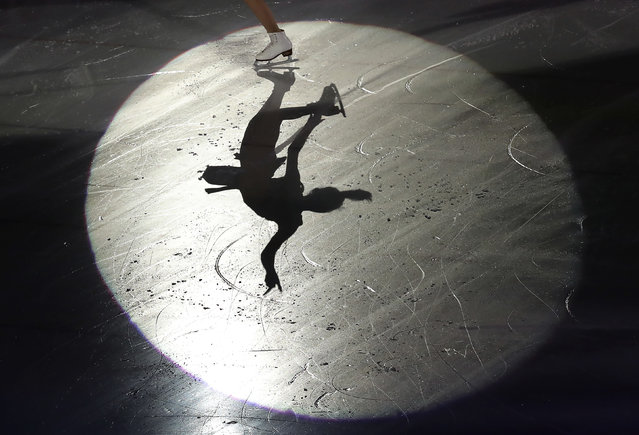 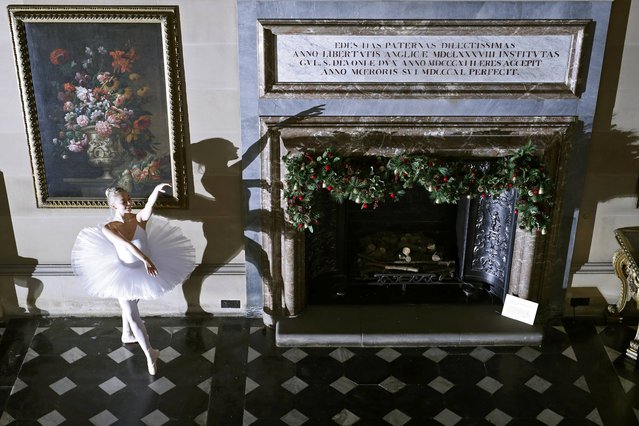 Dancer Daisy Kerry poses as the Snow Queen from The Nutcracker, for the annual Christmas event at Chatsworth House near Bakewell in Britain November 4, 2016. (Photo by Darren Staples/Reuters) 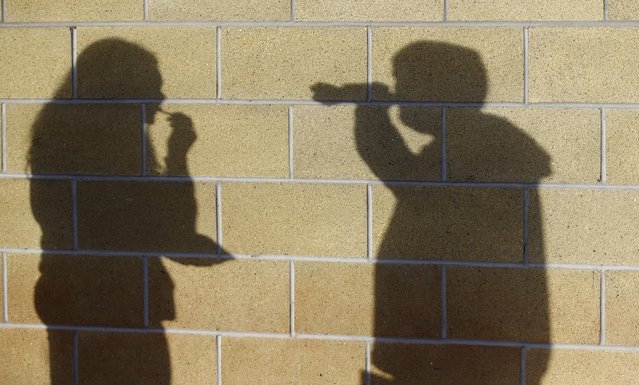 Britain Soccer Football, Swansea City vs West Ham United, Premier League, Liberty Stadium on December 26, 2016. General view of the shadows of fans outside the stadium before the match. (Photo by Peter Cziborra/Reuters/Action Images/Livepic) 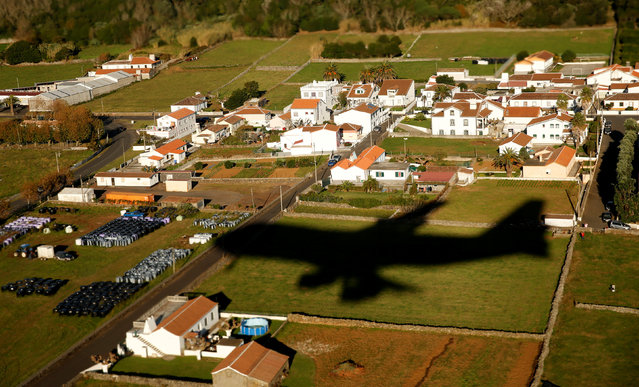 Air Force One casts a shadow as it lands with U.S. President Barack Obama for a refueling stop in Lajes Air Base in the Azores, Portugal, on his way to Peru November 18, 2016. (Photo by Kevin Lamarque/Reuters) 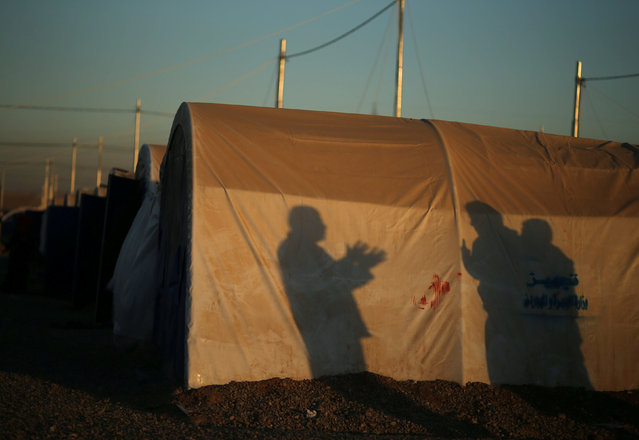 Shadows of Displaced Iraqis, who fled the Islamic State stronghold of Mosul, are cast against a tent at Khazer camp, Iraq November 24, 2016. (Photo by Mohammed Salem/Reuters) 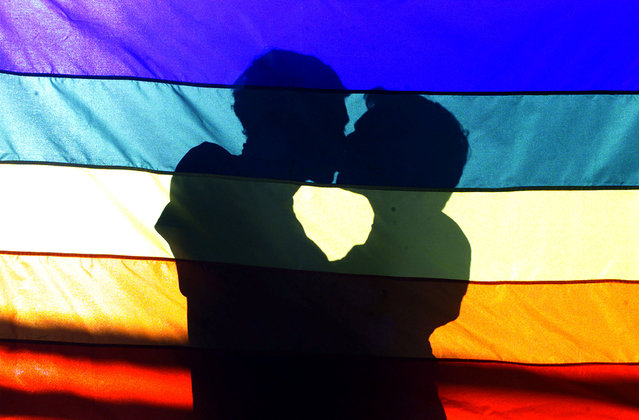 Men kiss each other during a gay protest in front at Nossa Senhora da Paz church in the Ipamena neighborhood in Rio de Janeiro, Brazil, August 3, 2003. (Photo by Bruno Domingos/Reuters) 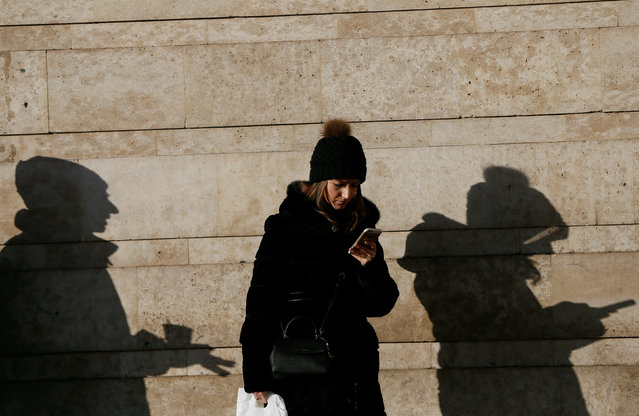 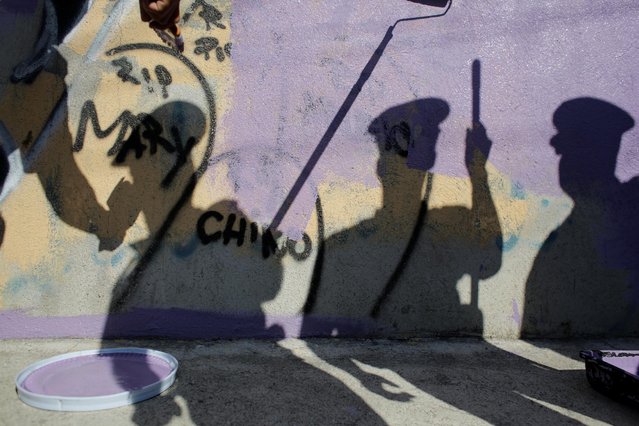 Policemen cast their shadows on a wall with a graffiti associated with the Mara Salvatrucha gang during an operation aimed to erase gang-related graffiti at the El Bucaro settlement in Guatemala City, Guatemala January 20, 2017. (Photo by Luis Echeverria/Reuters) 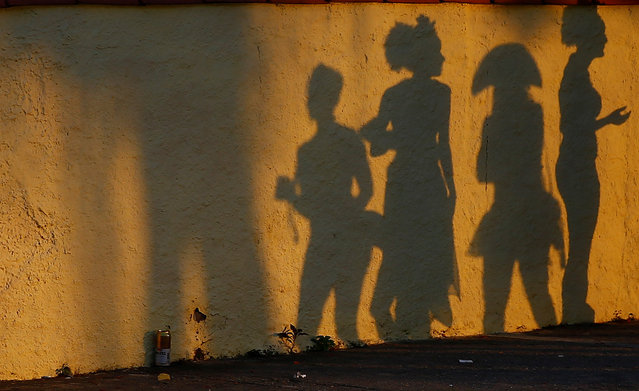 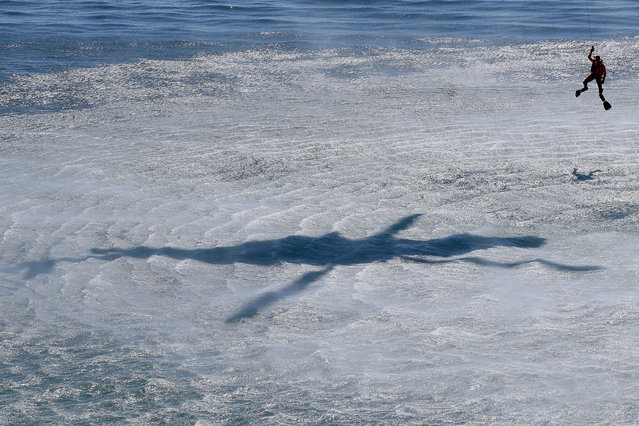 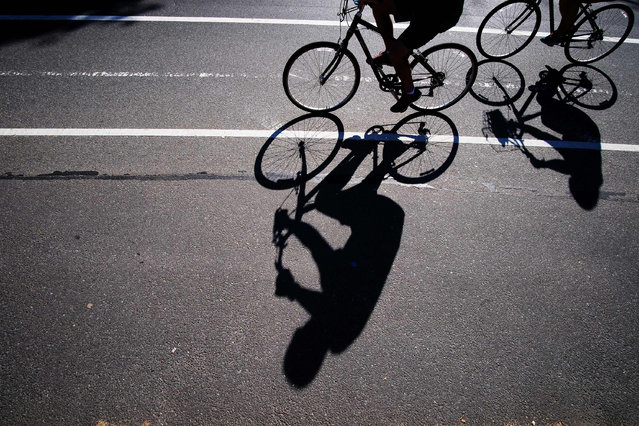 People ride on bikes during a summer-like day in Central Park in New York on October 18, 2016. (Photo by Jewel Samad/AFP Photo) 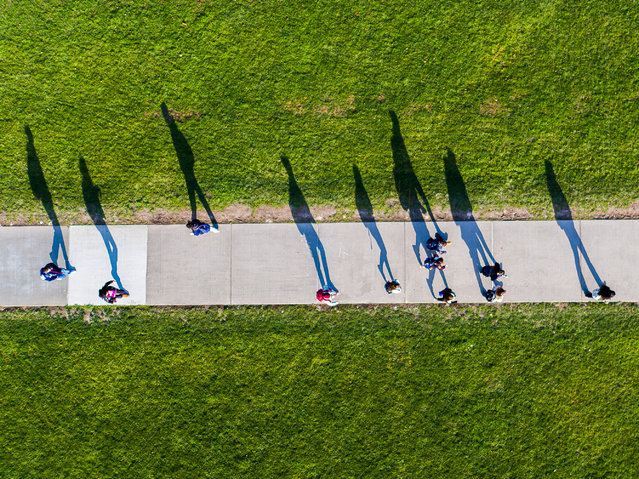 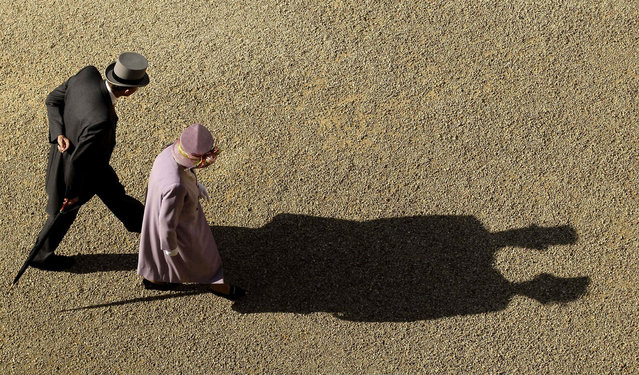 Queen Elizabeth and Prince Philip walk back into the Palace after attending the annual summer garden party held at Buckingham Palace in London on June 29, 2011. (Photo by Matt Dunham/Reuters) 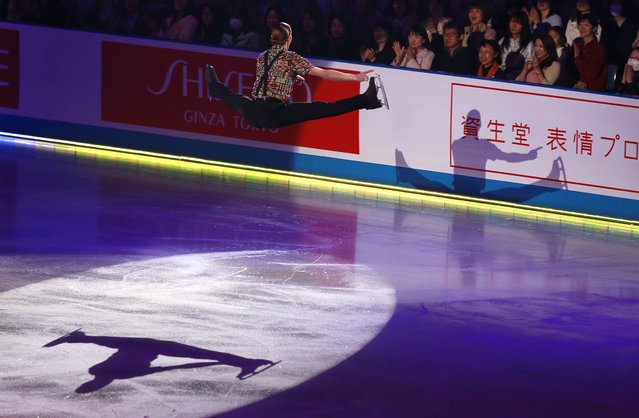 Spotlights project shadows of Jason Brown of the United States as he performs during the gale exhibition of the World Team Trophy Figure Skating in Tokyo, Sunday, April, 23, 2017. (Photo by Shizuo Kambayashi/AP Photo) 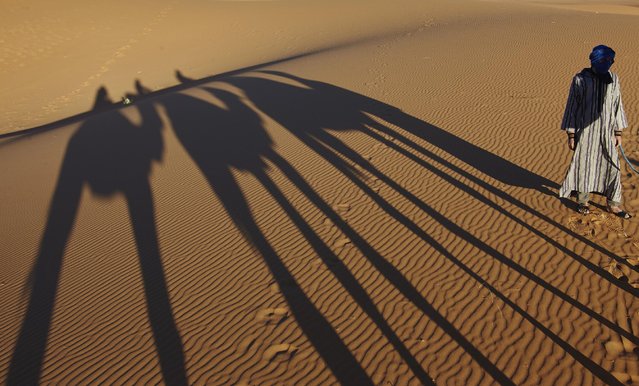 A camel vendor walks near the shadows of tourists riding camels, in Merzouga, Morocco along what is called the route of a thousand kasbahs in the Atlas Mountains, Sunday, March 5, 2017. (Photo by Abdeljalil Bounhar/AP Photo) 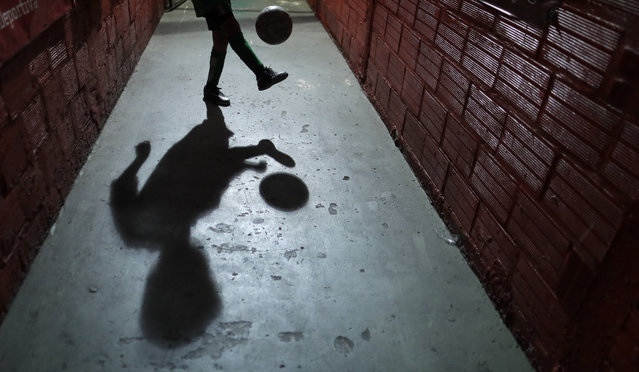 In this November 11, 2016 photo, a child plays with a ball at the youth soccer academy, Club Social Parque, in a working class neighborhood of Buenos Aires, Argentina. Club Social Parque is the same soccer talent factory where international stars like Diego Maradona, Carlos Tevez and Juan Roman Riquelme polished their skills as children. (Photo by Natacha Pisarenko/AP Photo) 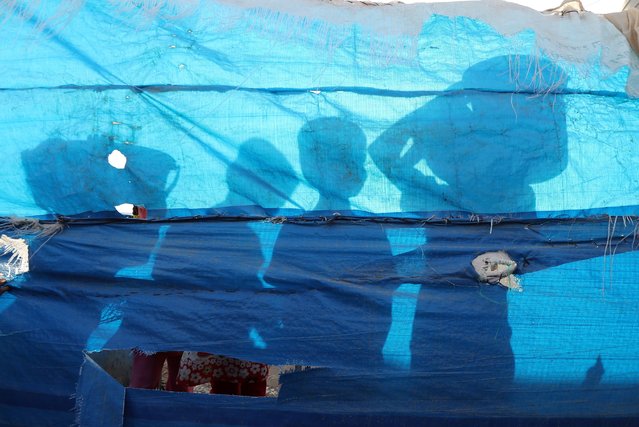 A picture taken on May 27, 2017 shows the silhouettes of displaced children queuing up for water rations on the first fasting day of the Muslim holy month of Ramadan, at al-Khazir camp for the internally displaced, located between Arbil and Mosul. (Photo by Karim Sahib/AFP Photo)
Edit Del
01 Aug 2017 07:15:00, post received 0 comments
Publication archive:
←   →
Popular tags:
All tags
Last searches: