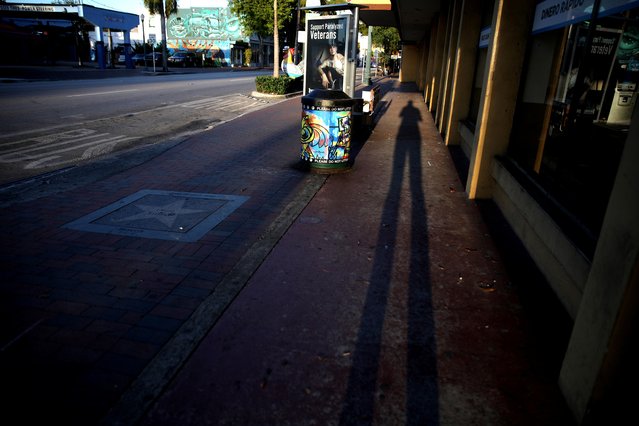 An empty street is seen in Little Havana, Miami, after local authorities restricted the activities of restaurants, bars, gyms, movie theaters and other similar businesses for precaution due to coronavirus disease spread, in Miami, Florida on March 23, 2020. (Photo by Carlos Barria/Reuters) 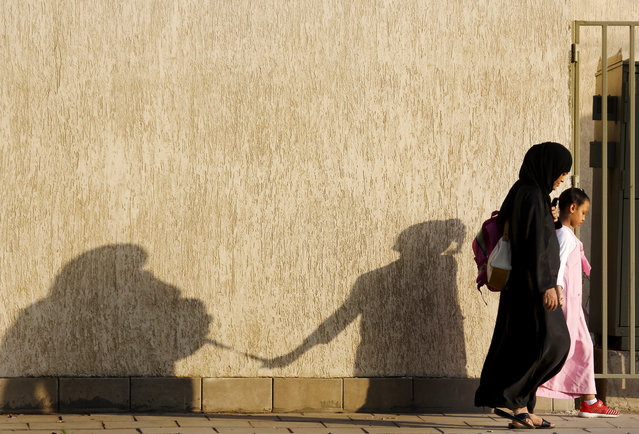 The shadow of mother and her daughter is reflected on a wall as they walk to the school, in Jiddah, Saudi Arabia, Monday, October 21, 2019. (Photo by Amr Nabil/AP Photo) 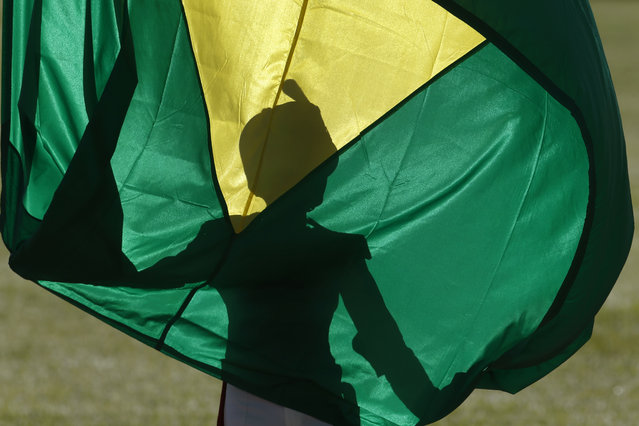 A soldier holds the Brazilian flag during the flag-raising ceremony at the Alvorada Palace, in Brasilia, Brazil, Tuesday, December 17, 2019. (Photo by Eraldo Peres/AP Photo) 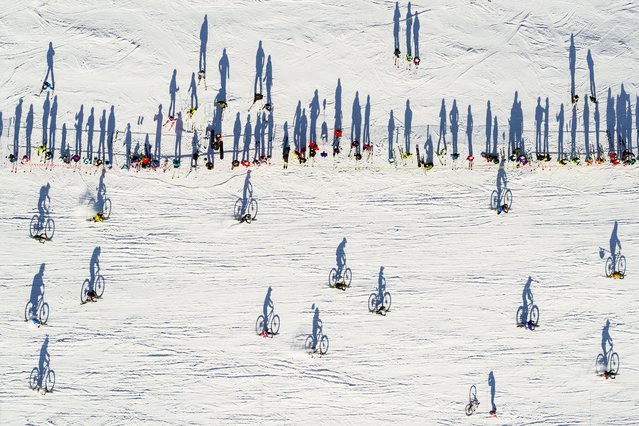 A picture taken with a drone shows cyclists taking part in the 31st edition of the “GP St-Sylvestre”, a new-year snow mountain bike race, in the alpine resort of Villars-Sur-Ollon, Switzerland, 31 December 2019. Over 150 cyclists, some dressed in costumes, took part in the competition on the ski slopes in Villars-Sur-Ollon. (Photo by Valentin Flauraud/EPA/EFE) 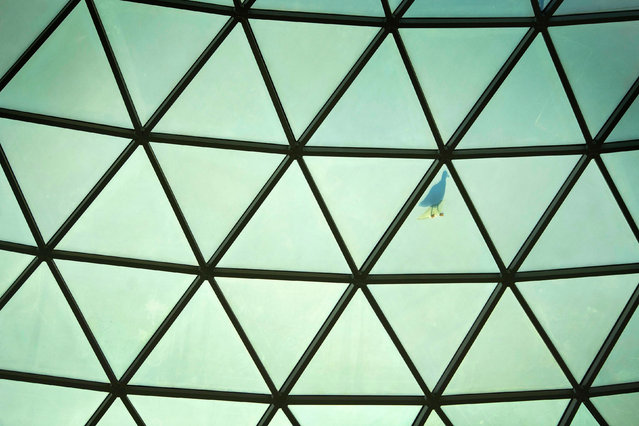 A seagull walks on the glass ceiling of the British Museum in London, England on January 9, 2020. (Photo by Victoria Jones/PA Images via Getty Images) 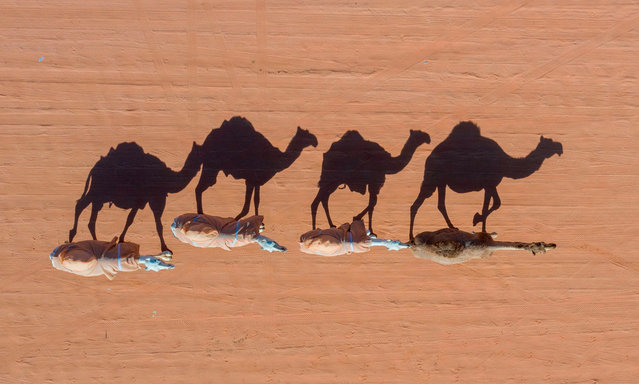 Camels are pictured with a drone during the annual King Abdulaziz Camel Festival in Rumah, some 160 kilometres east of Riyadh, on January 7, 2020. (Photo by Faisal Al-Nasser/AFP Photo) 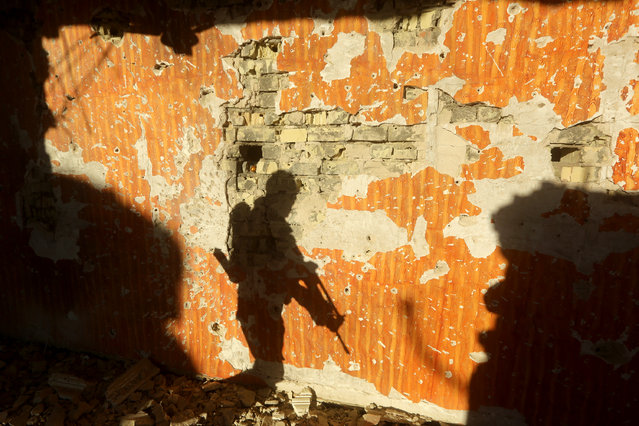 Iraqi soldiers patrol a suburb close to the area of Jweibah, east of the city of Ramadi, the capital of Iraq's Anbar province on February 4, 2016. (Photo by Ahmad Al-Rubaye/AFP Photo) 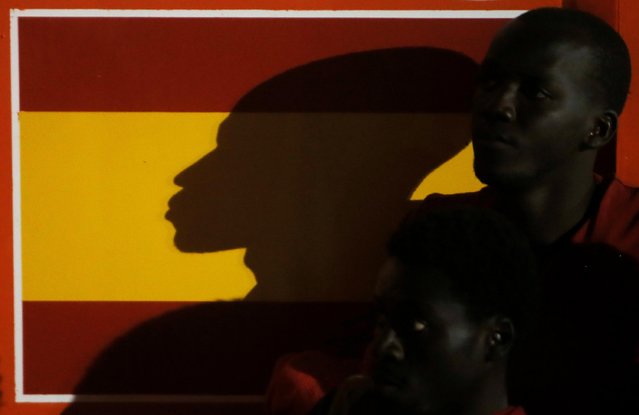 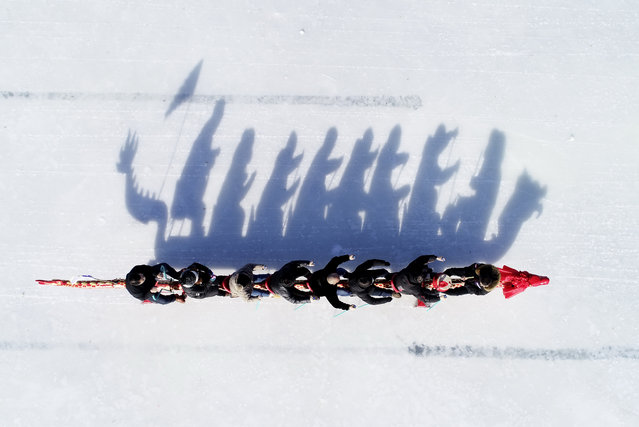 A team competes in a snow dragon boat race on the Shali river in Inner Mongolia, Chifeng, China on January 3, 2020. (Photo by Costfoto/Barcroft Media) 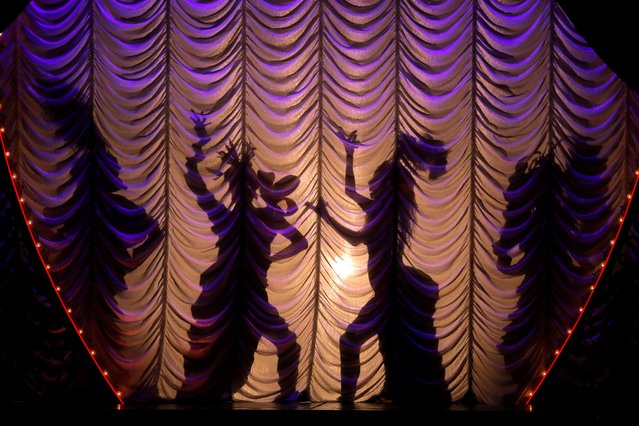 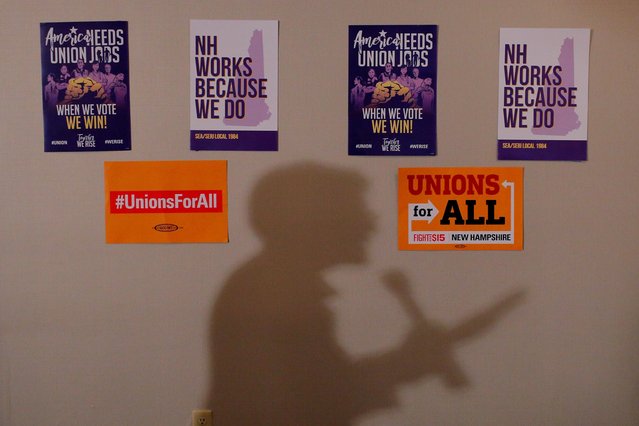 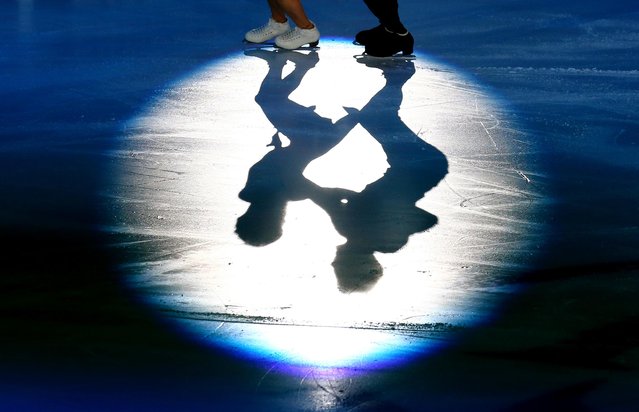 Russia's Victoria Sinitsina and Nikita Katsalapov during the Exhibition Gala at the ISU European Figure Skating Championships in Graz, Austria on January 26, 2020. (Photo by Antonio Bronic/Reuters) 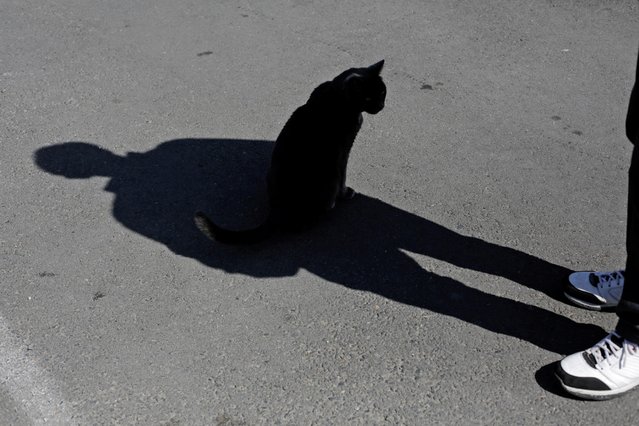 John Walker casts a shadow over his cat Sheldon at the Bella-B Mobile Home Park, where owner Yacov Sinai decreased rents by $225, or about 27%, to help residents in difficult economic situations due to the coronavirus disease (COVID-19) outbreak, in Seattle, Washington, U.S. April 6, 2020. (Photo by David Ryder/Reuters) 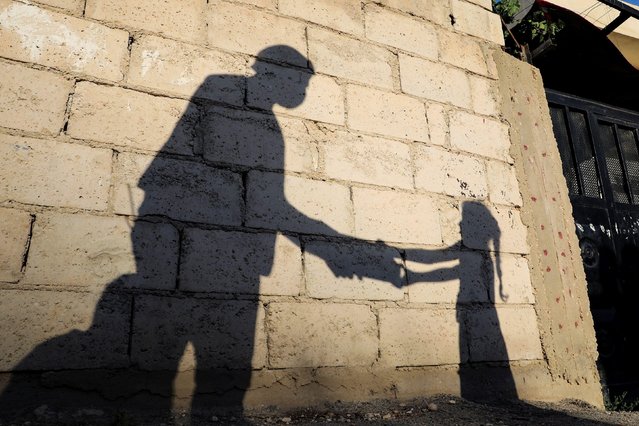 The shadow of a girl receiving a meal for iftar, or the evening meal, to break fast from a member of “Tkiyet Um Ali” humanitarian services center is cast on a wall in front of her family home in the city of Russeifa, during the holy fasting month of Ramadan, amid concerns over the spread of coronavirus disease (COVID-19), in Jordan, April 28, 2020. (Photo by Muhammad Hamed/Reuters) 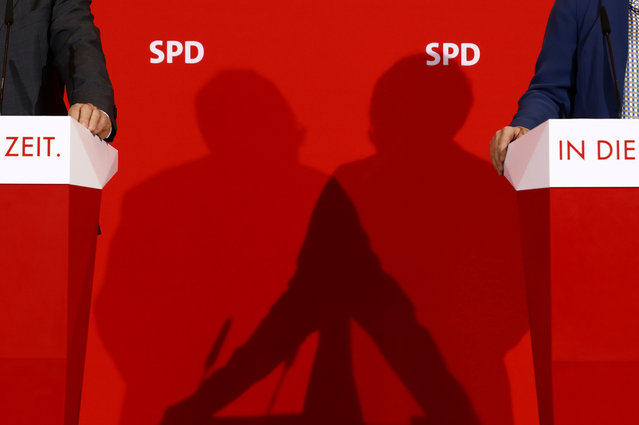 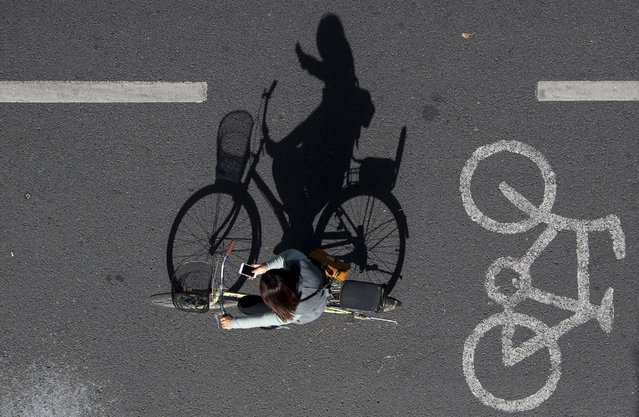 A woman uses her mobile phone while riding her bike on a street in Beijing on October 21, 2019. (Photo by Noel Celis/AFP Photo) 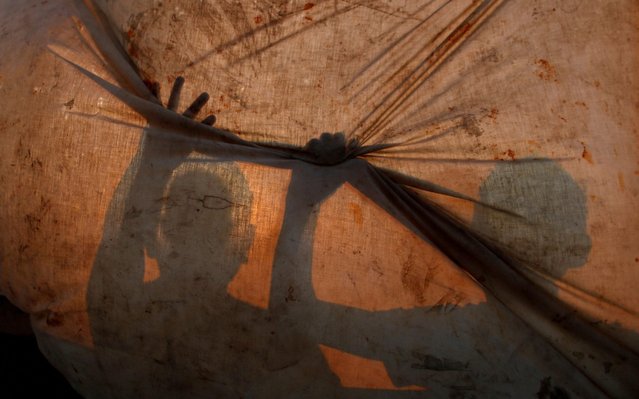 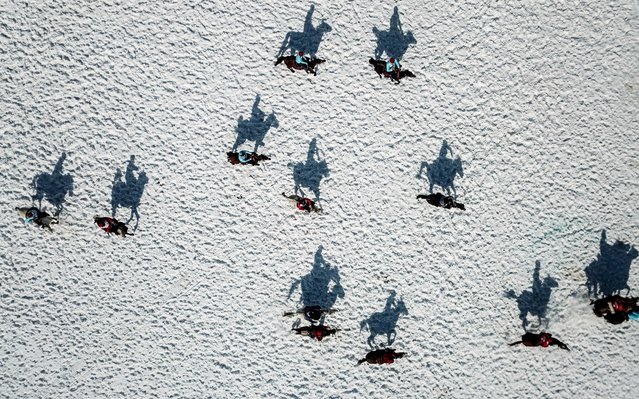 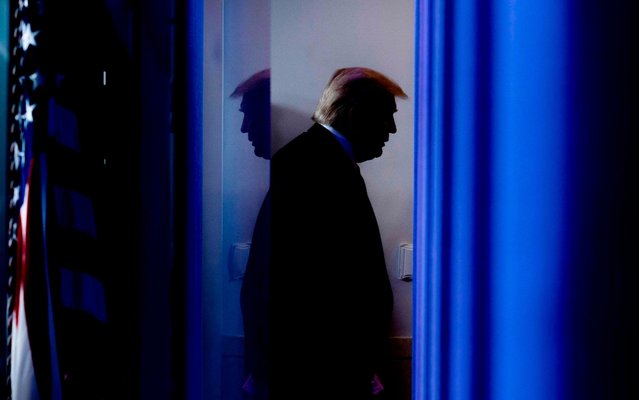 US President Donald Trump departs after speaking during the daily briefing on the novel coronavirus, which causes COVID-19, in the Brady Briefing Room of the White House on April 17, 2020, in Washington, DC. (Photo by Jim Watson/AFP Photo) 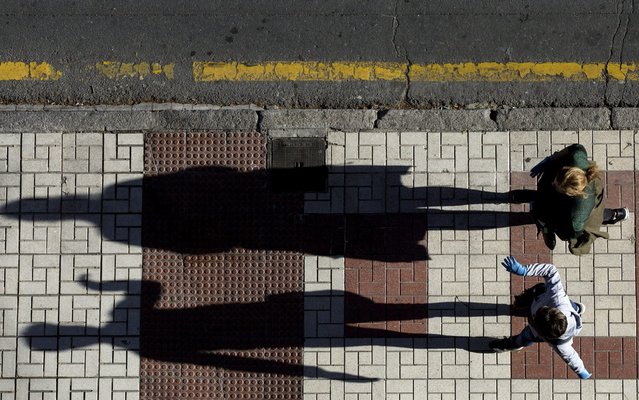 A woman walks with her daughter through an empty street on April 27, 2020 in Malaga, Spain. Since April 27 children under 12 are allowed to come and go from their homes more freely. Spain has had more than 209,000 confirmed cases of COVID-19 and over 23,000 reported deaths, although the rate has declined after weeks of lockdown measures. (Photo by Daniel Perez Garcia-Santos/Getty Images)
Edit Del
02 May 2020 00:03:00, post received 0 comments
Publication archive:
←   →
Popular tags:
All tags
Last searches: