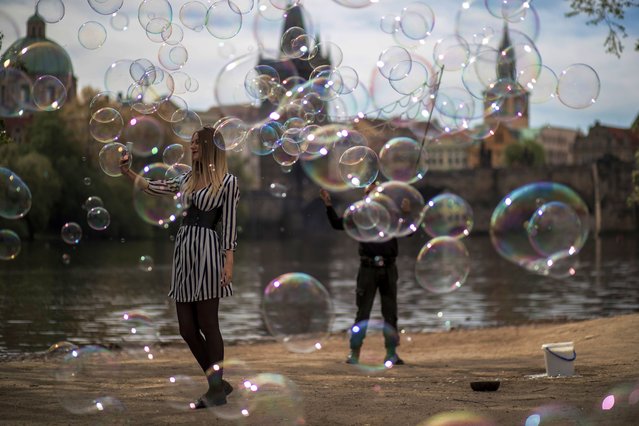 A woman takes a selfie photo as a man blows bubbles on the Vltava river bank in Prague, Czech Republic, 26 April 2019. (Photo by Martin Divisek/EPA/EFE) 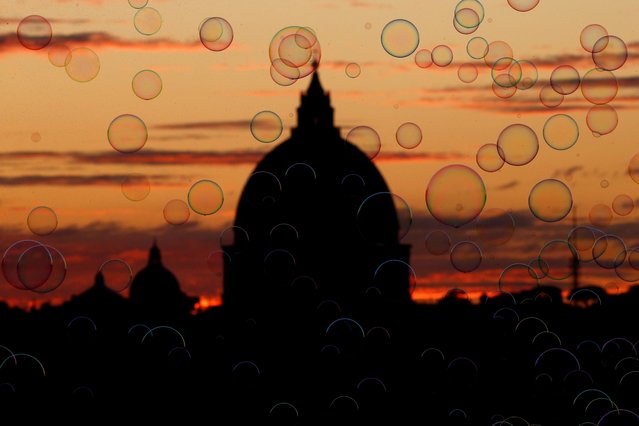 The dome of Saint Peter's Basilica is seen behind soap bubbles created by a street artist (not pictured) from Pincio terrace in Rome, Italy, November 25, 2019. (Photo by Guglielmo Mangiapane/Reuters) 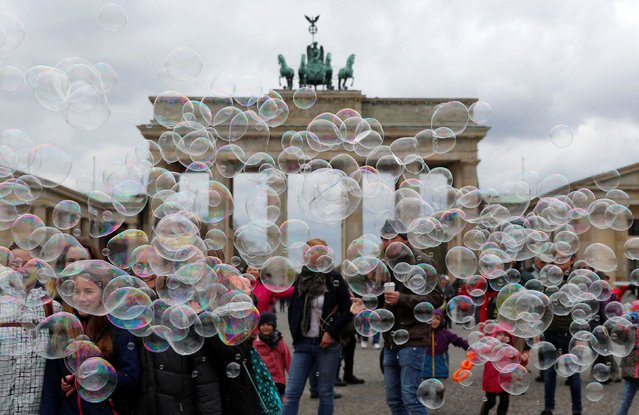 People are seen behind soap bubbles created by a street artist (not pictured) in front of the Brandenburg Gate in Berlin, Germany, April 12, 2019. (Photo by Fabrizio Bensch/Reuters) 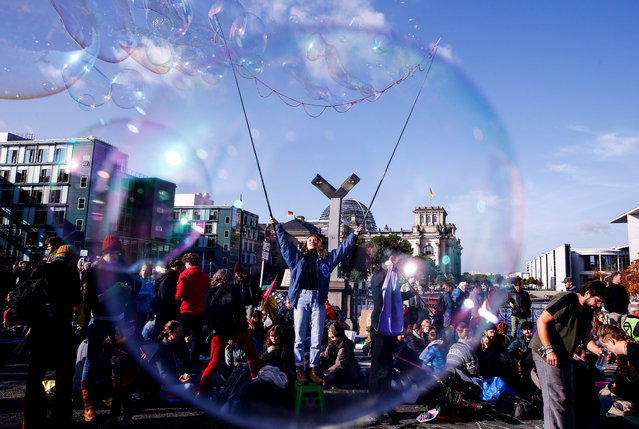 A member of Extinction Rebellion, a group of environmentalist activists, makes bubbles as protests continue in order to draw attention to climate change and global warming in Berlin, on October 9, 2019. Extinction Rebellion activists began gathering in cities around the world on October 7 to kick off a fortnight of global civil disobedience demanding governments take urgent action on climate change. Protesters gathered at various points of the city and blocked traffic at Marshall-Bridge. (Photo by Abdulhamid Hosbas/Anadolu Agency via Getty Images) 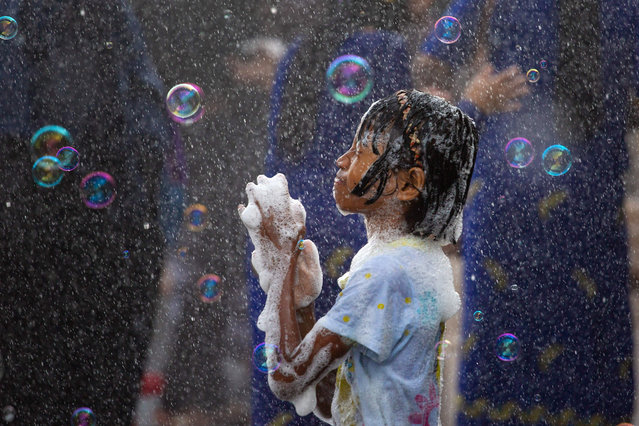 A girl plays with soap suds during celebrations for the Thingyan festival, also known as the Buddhist New Year, in Yangon on April 13, 2019. (Photo by Sai Aung Main/AFP Photo) 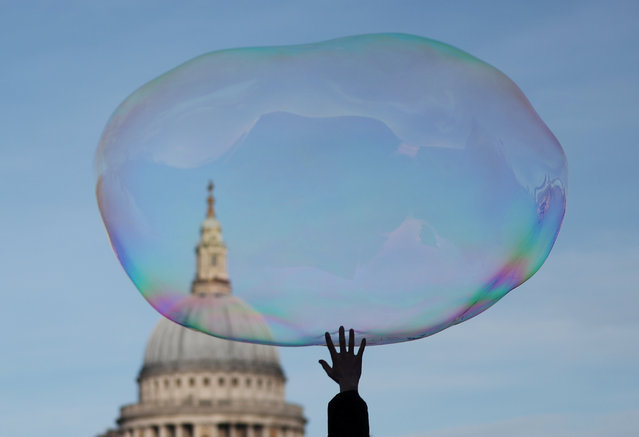 A child bursts a soap bubble as it floats past St Paul's Cathedral in London, Britain, December 27, 2019. (Photo by Hannah McKay/Reuters) 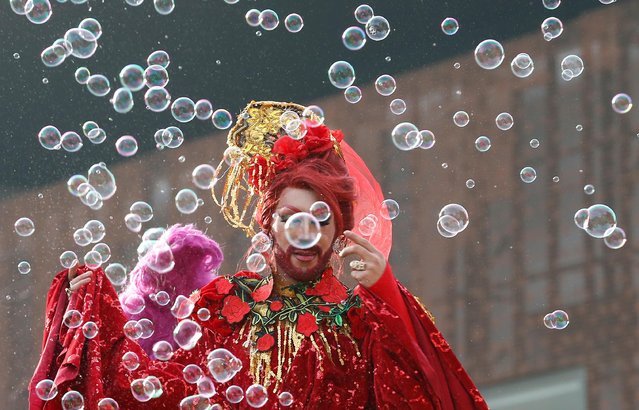 A reveller takes part in the annual Gay Pride parade in support of LGBT community, in Santiago, Chile, June 22, 2019. (Photo by Rodrigo Garrido/Reuters) 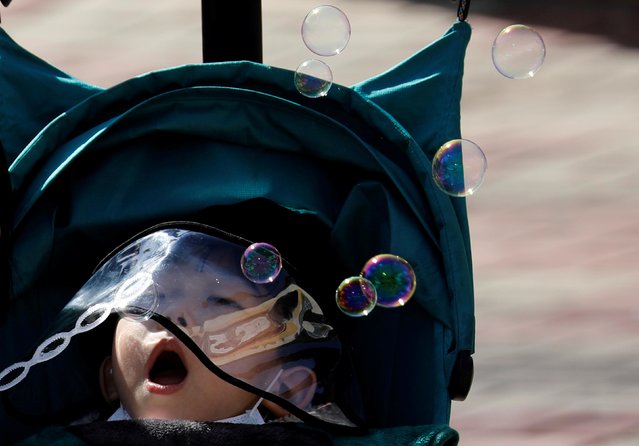 A boy wearing a hat with a protective screen, following an outbreak of coronavirus disease (COVID-19), blows soap bubbles at a park in Daegu, South Korea, March 12, 2020. (Photo by Kim Kyung-Hoon/Reuters) 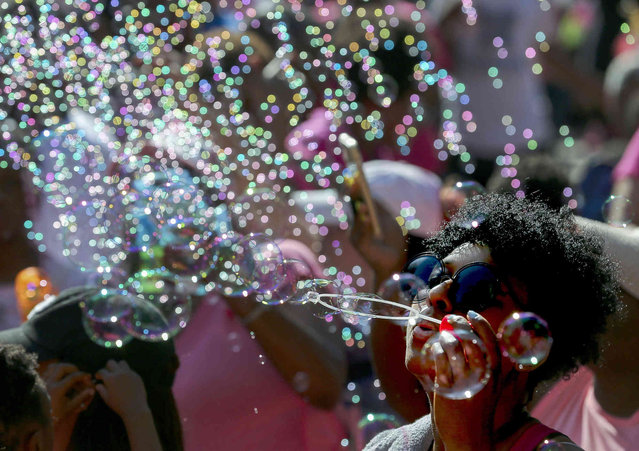 Trinity Newman blows bubbles along with thousands of people outside City Hall in honor of Maleah Davis, the four-year-old girl who went missing in early May and whose body was found tossed along an Arkansas roadside last week, on Sunday, June 9, 2019, in Houston. The city declared today “Maleah Davis Day” and people wore pink, her favorite color, in her honor. (Photo by Godofredo A Vásquez/Houston Chronicle via AP Photo) 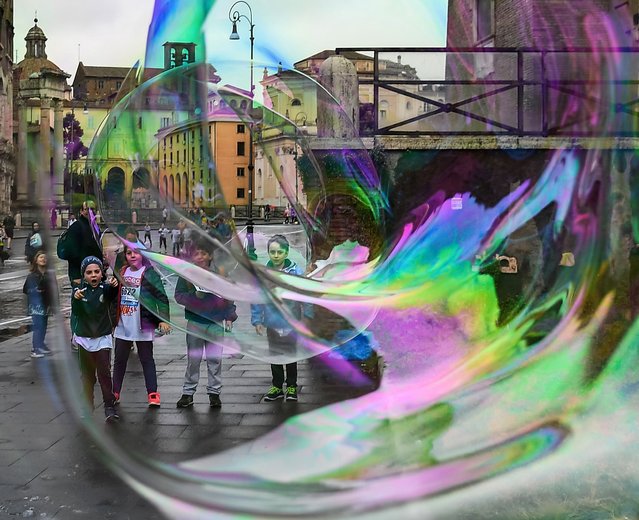 Children play with giant soap bubbles blown by a man for tourists and children on April 7, 2019 in Rome. (Photo by Vincenzo Pinto/AFP Photo) 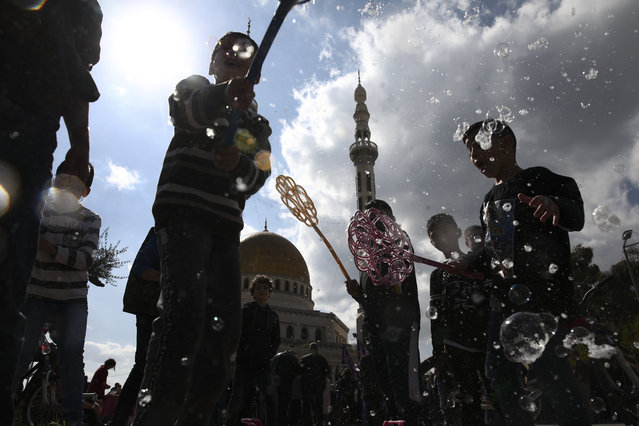 Israeli Arab kids play with soap bubbles during a protest against U.S. President Donald Trump's Mideast initiative, in the Israeli Arab town of Jaljulia, Israel, Friday, February 21, 2020. The proposal has infuriated many of Israel's Arab citizens, who view it as a form of forced transfer. (Photo by Oded Balilty/AP Photo) 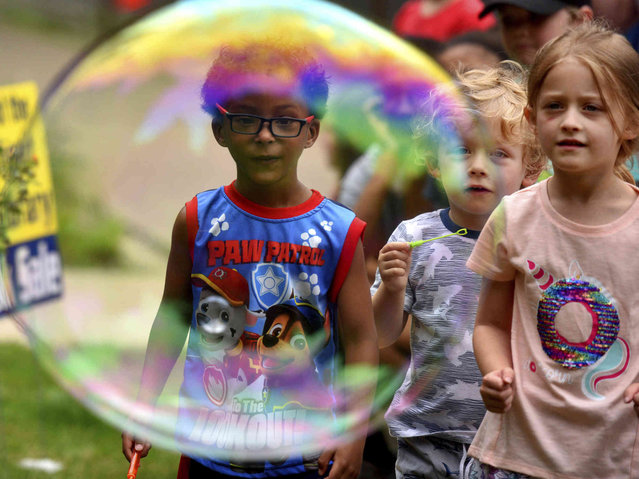 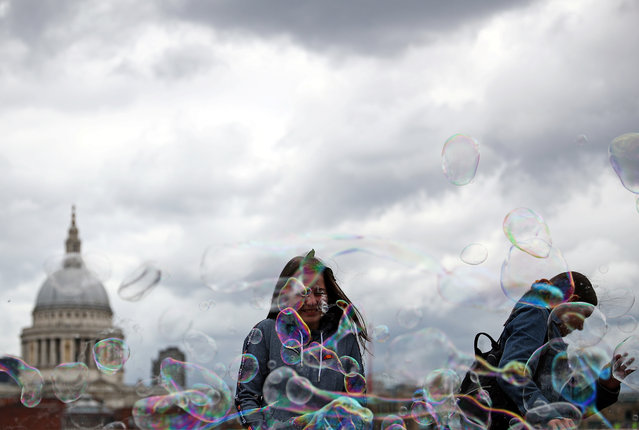 People walk through soap bubbles in front of St Paul's Cathedral in London, Britain, May 27, 2019. (Photo by Hannah McKay/Reuters) 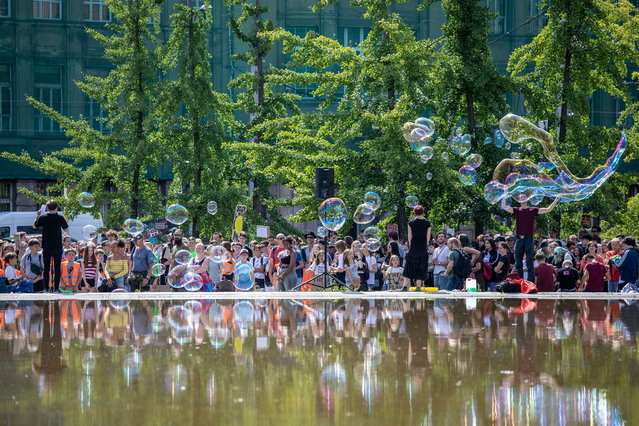 Protesters hold signs and make soap bubles during a 'Fridays for Future' demonstration near the Federal Ministry of Economy in Berlin, Germany, 09 August 2019. Students across the world are taking part in the strike movement called #FridayForFuture, which takes place every Friday. The movement was sparked by 16-year-old Greta Thunberg of Sweden, a student who started protesting for climate action and the implementation of the Paris Agreement. The “Fridays for Future” movement, which started in the summer of 2018, demands compliance with the goals of the Paris Agreement and the 1.5 degree Celsius reduction target. (Photo by Omer Messinger/EPA/EFE) 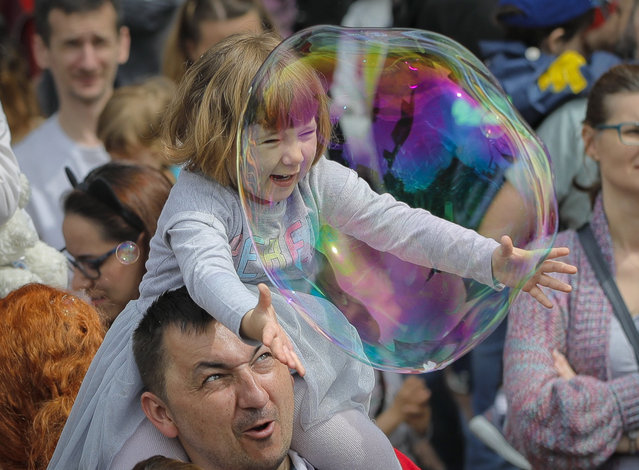 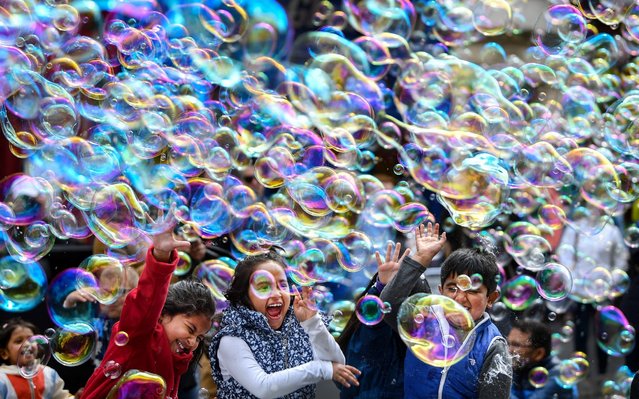 A street performer on the Royal Mile entertains members of the public with a mass of bubbles on May 27, 2019 in Edinburgh, Scotland. (Photo by Jeff J Mitchell/Getty Images) 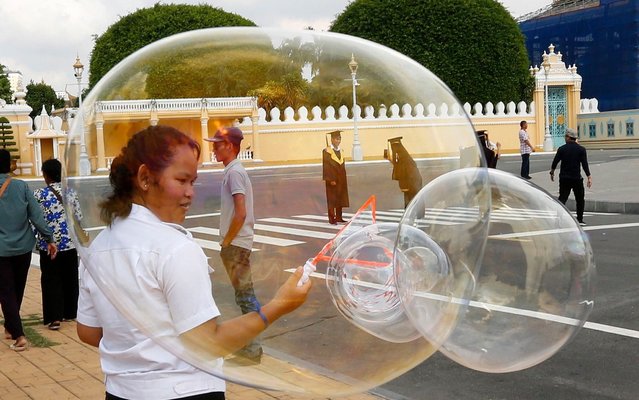 A young Cambodian girl plays outside the Royal Palace in Phnom Penh, Cambodia, 01 June 2019. Many Cambodian children from low income families work to help their families and are not able to attend school. Cambodia marked the annual International Children's Day on 01 June in support of children's rights. (Photo by Kith Serey/EPA/EFE/Rex Features/Shutterstock) 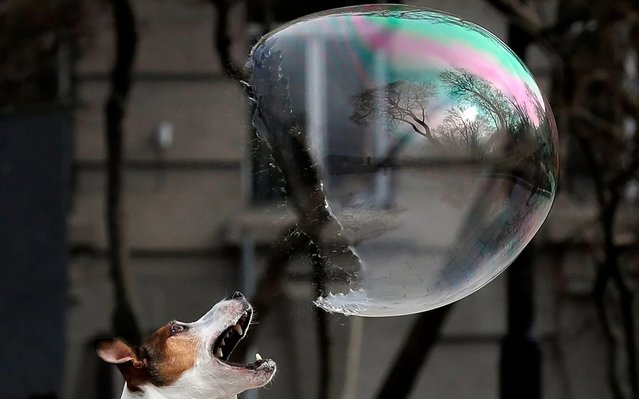