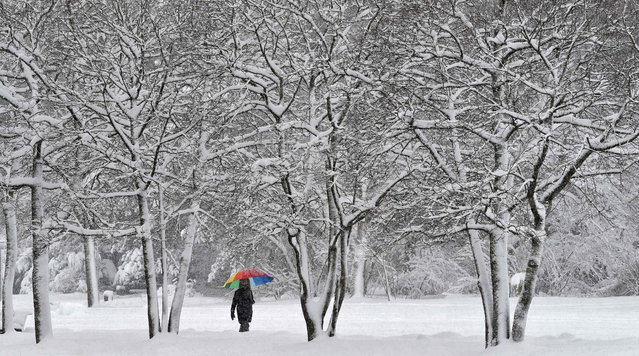 A pedestrian walks with an umbrella in a snow covered park in Munich, southern Germany on January 10, 2019. (Photo by Christof Stache/AFP Photo) 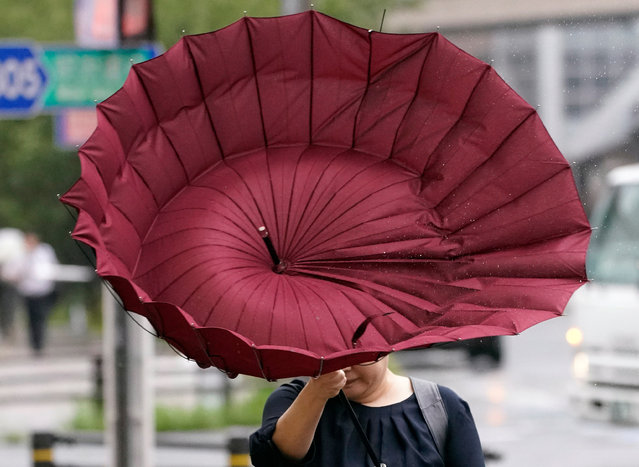 A pedestrian using an umbrella struggles against strong wind and rain generated by Typhoon Faxai, in Tokyo, Japan, 09 September 2019. Typhoon Faxai landed near Tokyo overnight affecting commuters from early morning due to suspended train and airlines services. According to latest media reports, 20 people were injured as a result of the storm. (Photo by Franck Robichon/EPA/EFE) 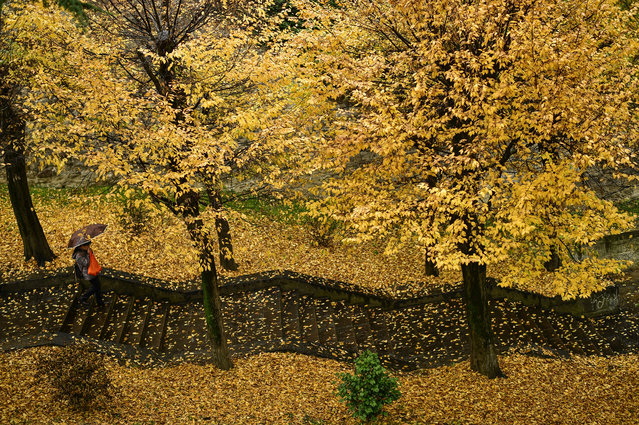 A pedestrian walks down a stairways through a row of rees during a rainy autumn day, in Pamplona, northern Spain, Tuesday, November 20, 2018. (Photo by Alvaro Barrientos/AP Photo) 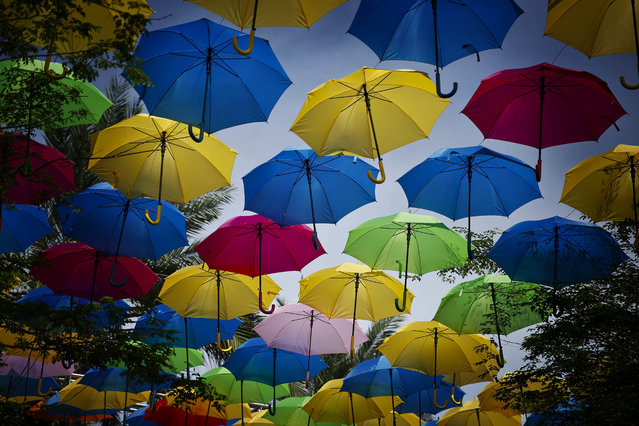 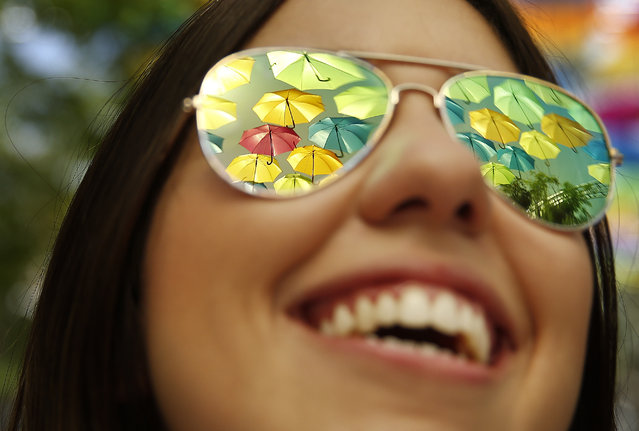 Umbrellas are reflected in the eyes of Nicolle Zappala, of Weston, Fla., as she looks at an art installation called Umbrella Sky on Monday, July 16, 2018, in Coral Gables, Fla. (Photo by Brynn Anderson/AP Photo) 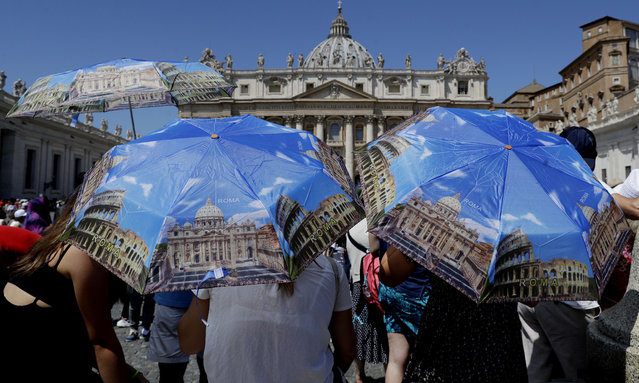 Faithful gather in St. Peter's Square as they wait for Pope Francis to recite the Angelus noon prayer, at the Vatican, Sunday, July 21, 2019. Pope Francis is hoping that the 50th anniversary of the first moon walk inspires efforts to help our “common home” on Earth. Francis told the public in St. Peter's Square on Sunday, the day after the anniversary of the July 20, 1969, lunar landing, that the feat achieved an “extraordinary dream”. (Photo by Gregorio Borgia/AP Photo) 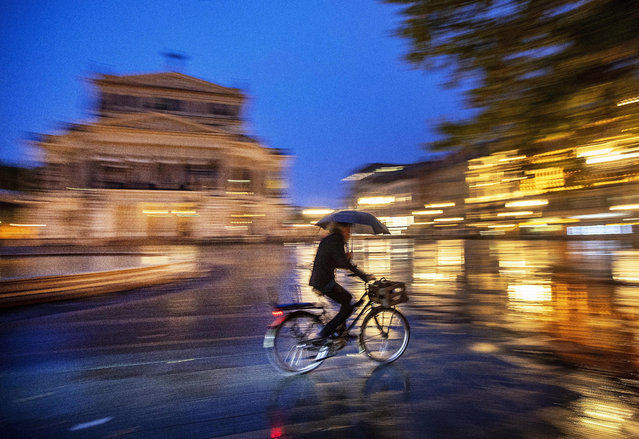 A man with umbrella rides his bike in front of the Old Opera in Frankfurt, Germany, on a rainy Monday, September 23, 2019. (Photo by Michael Probst/AP Photo) 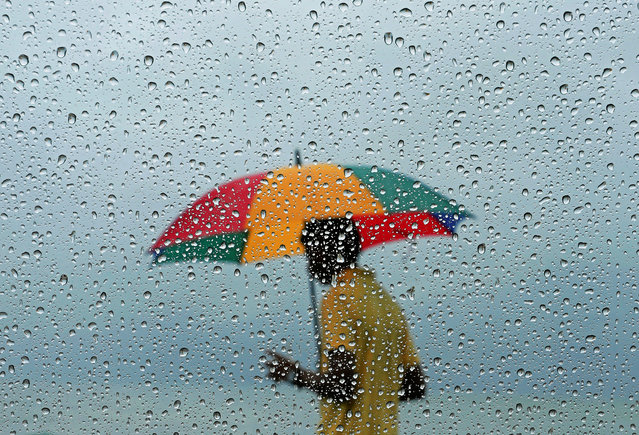 A man carrying an umbrella is seen through a window covered with rain drops during a wet day in Colombo, Sri Lanka on September 24, 2019. (Photo by Dinuka Liyanawatte/Reuters) 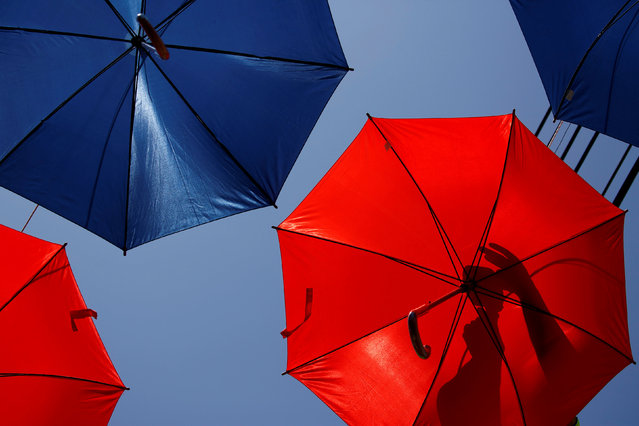 A worker arranges coloured umbrellas hanging over a street in preparation for a music festival at the weekend, in Zabbar, Malta on June 5, 2018. (Photo by Darrin Zammit Lupi/Reuters) 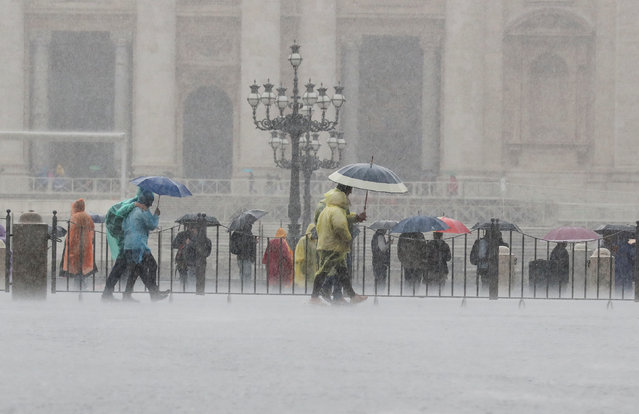 People shelter under umbrellas as they walk in St Peter's square at the Vatican on November 6, 2018. (Photo by Alessandro Bianchi/Reuters) 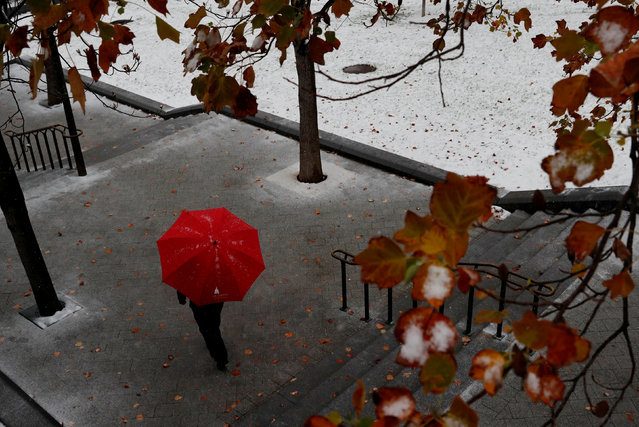 A worker waits for visitors outside of the U.S. Capitol in Washington, U.S., November 15, 2018. (Photo by Leah Millis/Reuters) 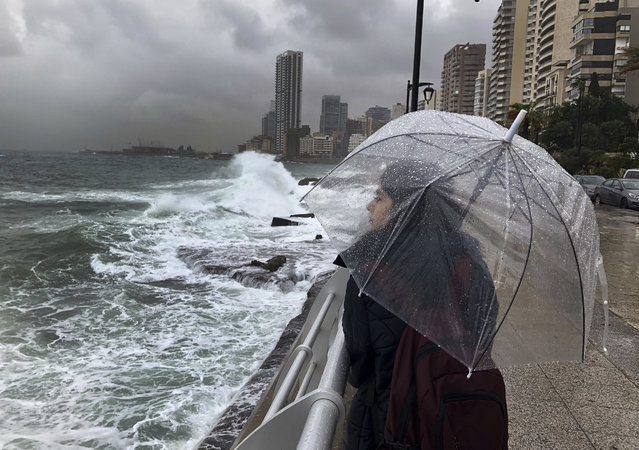 A Lebanese girl shelters for the rain, as she watches waves crash into the seawall on the Mediterranean Sea, in Beirut, Lebanon, Tuesday, January 8, 2019. A strong storm in Lebanon brought cold temperatures and snow to Lebanon's mountains and heavy rainfall, strong winds on the Lebanese coast. (Photo by Hussein Malla/AP Photo) 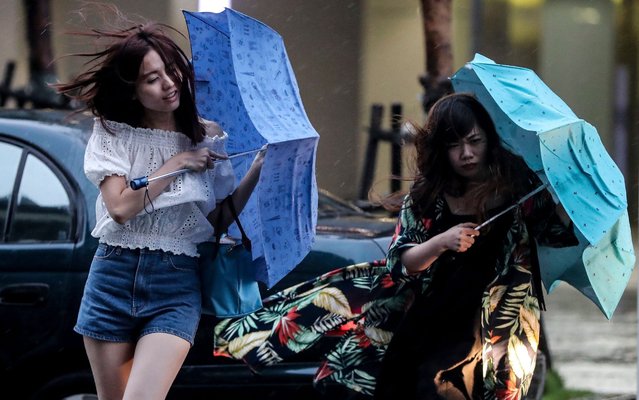 People struggle with the wind as they cross the street under the rain as typhoon Mitag is expected to hit northern Taiwan, in Keelung, Taiwan, 30 September 2019. According to report, Typhoon Mitag will disrupt air, land and water traffic. Mitag is located at sea about 290 kilometers off the south-southeast of Yilan County, moving at 27 kilometers per hour at a northwesterly direction, with maximum sustained winds of 126 kilometers per hour, with gusts of up to 162 kilometers per hour, and with a radius of 180 kilometers, according to Taiwan Central Weather Bureau. (Photo by Ritchie B. Tongo/EPA/EFE/Rex Features/Shutterstock) 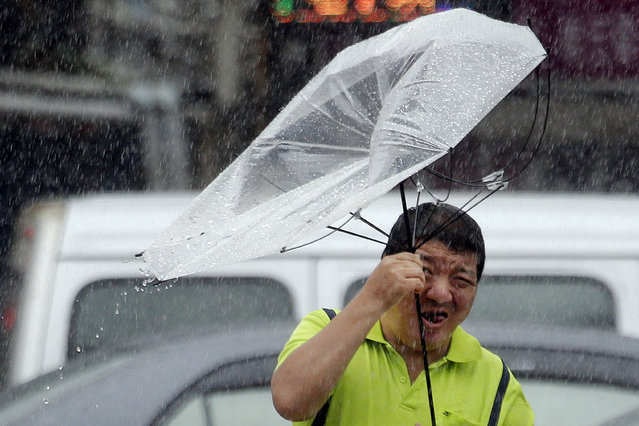 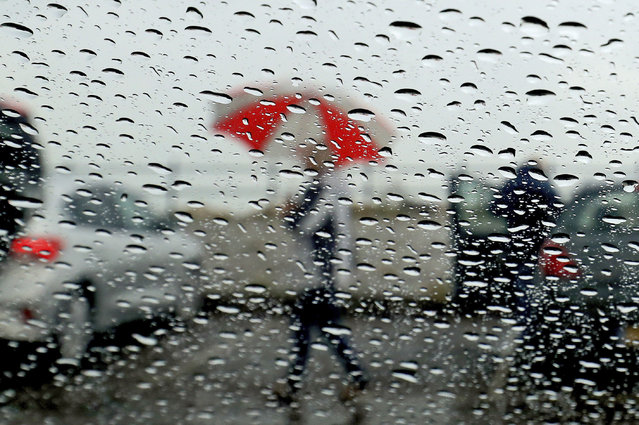 People return to the shelter of their cars during heavy rain at Reculver Towers, in Reculver, England, Monday August 12, 2019. (Photo by Gareth Fuller/PA Wire via AP Photo) 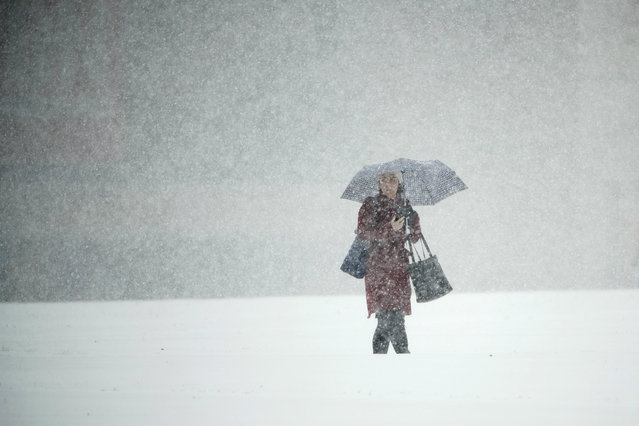 A person walks across Independence Mall during a snow storm in Philadelphia, Thursday, November 15, 2018. (Photo by Matt Rourke/AP Photo) 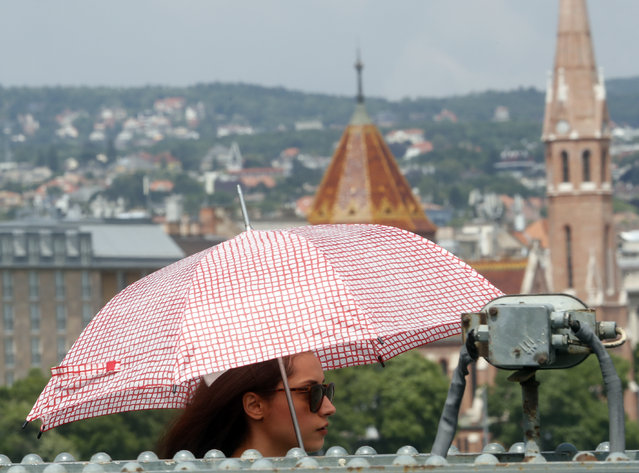 In this photo taken on Wednesday, June 5, 2019, a woman walks across the Chain Bridge over the Danube River in Budapest. A tourism boom in the Hungarian capital has led to major congestion on the river flowing through the city, with sightseeing boats and floating hotels competing for better positions in front of spectacular neo-Gothic buildings, ornate bridges and churches lining the Danube. (Photo by Laszlo Balogh/AP Photo) 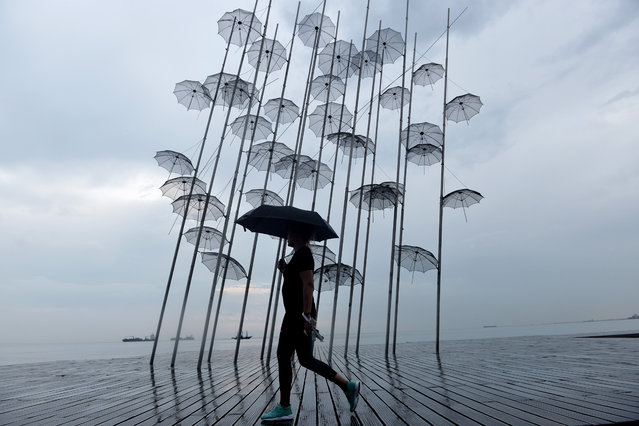 A woman with an umbrella walks under the rain past a sculpture called “Umbrellas” by Greek sculptor George Zongolopoulos along the waterfront in Thessaloniki on July 30, 2018. (Photo by Sakis Mitrolidis/AFP Photo) 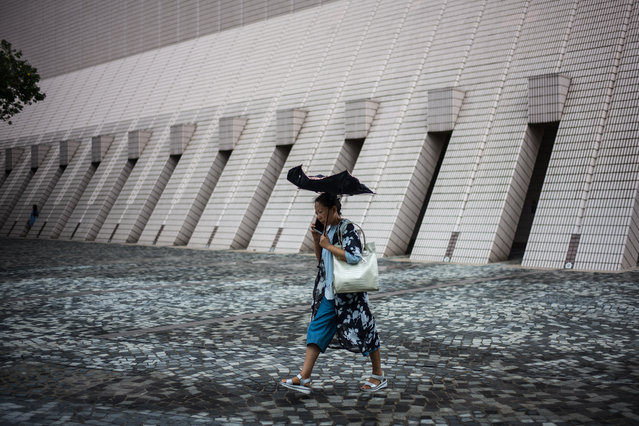 A woman uses an umbrella as she walks along a promenade that runs along Victoria Harbour in Hong Kong on September 13, 2018. (Photo by Anthony Wallace/AFP Photo) 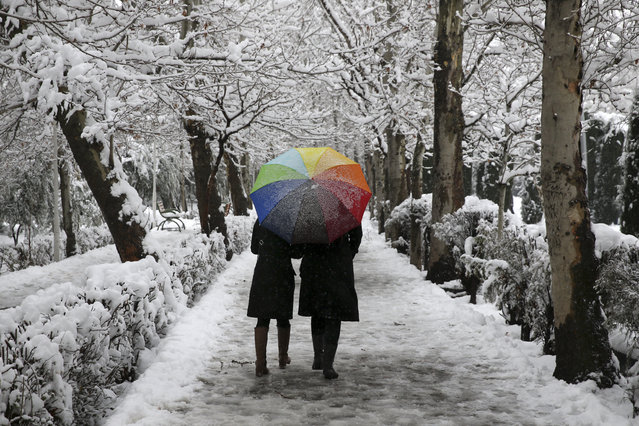