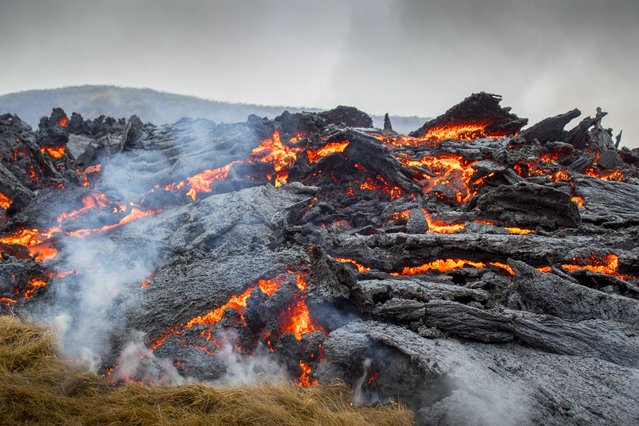 Lava flows from the erupting Fagradalsfjall volcano some 40 km west of the Icelandic capital Reykjavik, on March 21, 2021. Weekend hikers took the opportunity Sunday to inspect the area where a volcano erupted in Iceland on March 19, some 40 kilometres (25 miles) from the capital Reykjavik, the Icelandic Meteorological Office said, as a red cloud lit up the night sky and a no-fly zone was established in the area. (Photo by Marco Di Marco/AP Photo) 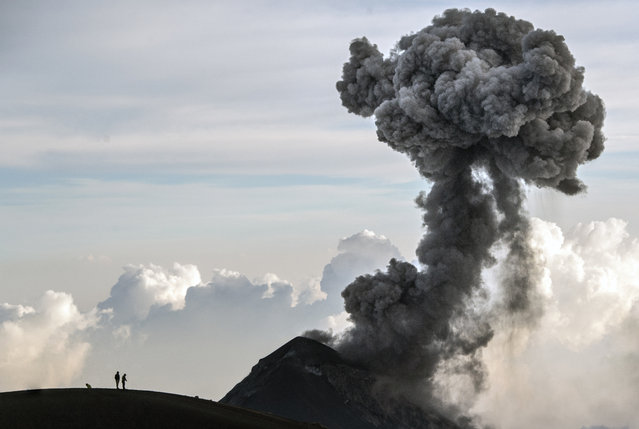 Hikers view Fuego Volcano as it erupts, from atop Acatenango summit in Acatenango, Guatemala on Tuesday, March 16, 2021. (Photo by Josh Edelson/AP Photo) 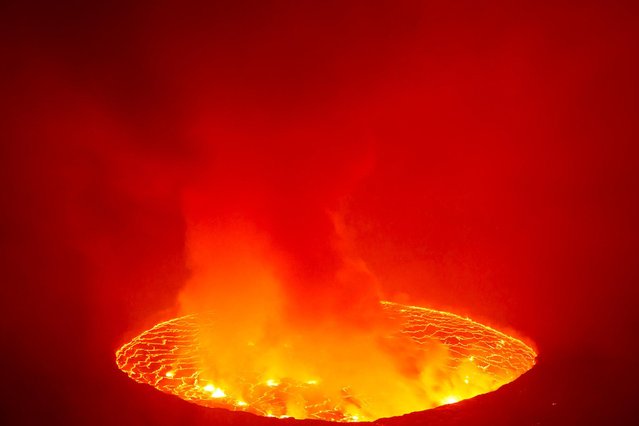 Lava lake lights up the night sky on Mount Nyiragongo volcano, inside the Virunga National Park, near Goma, in the eastern Democratic Republic of Congo on March 2021. Analysts say the crater of Mount Nyiragongo in the eastern Democratic Republic of Congo has refilled with magma, raising the crater floor and fears of an even bigger disaster if an earthquake were to cause a fracture in the flank of the volcano. (Photo by Hereward Holland/Reuters) 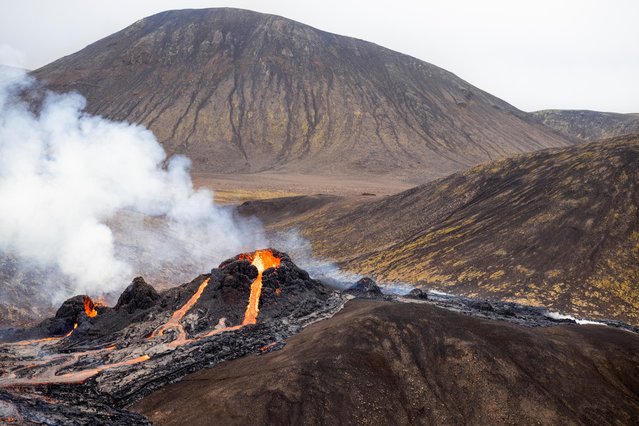 Lava flows from a volcano in Reykjanes Peninsula, Iceland on March 20, 2021. Located between the Eurasian and the North American tectonic plates, among the largest on the planet, Iceland is a seismic and volcanic hot spot as the two plates move in opposite directions. (Photo by Cat Gundry-Beck/Reuters) Lava flows from a volcano in the Reykjanes Peninsula, Iceland March 21, 2021. (Photo by Sigtryggur Johannsson/Reuters) 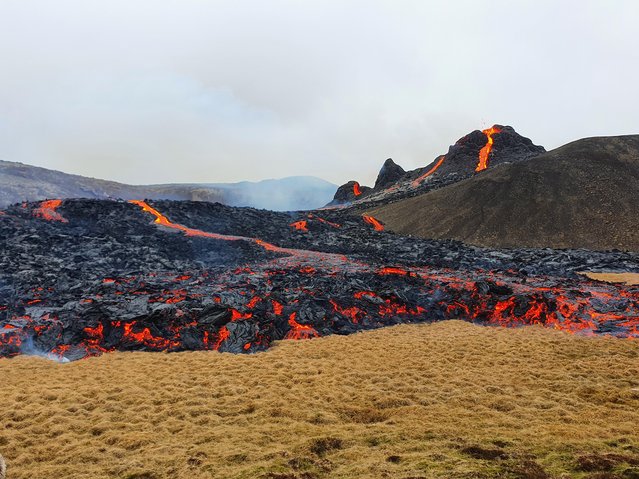 Lava flows from a volcano in the Reykjanes Peninsula, Iceland March 20, 2021. The volcano erupted near Iceland's capital Reykjavik on Friday, shooting lava high into the night sky after thousands of small earthquakes in recent weeks. (Photo by Icelandic Coast Guard via Reuters) 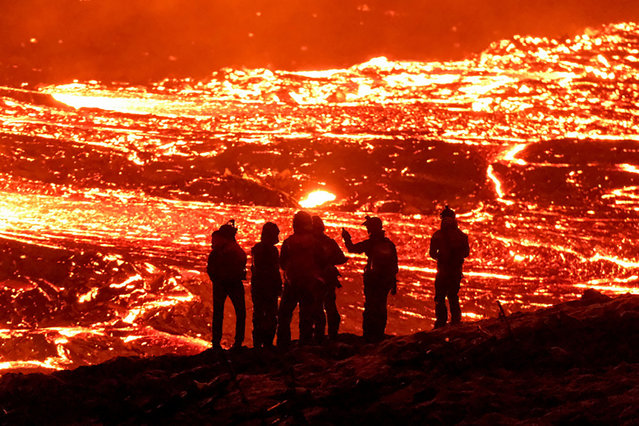 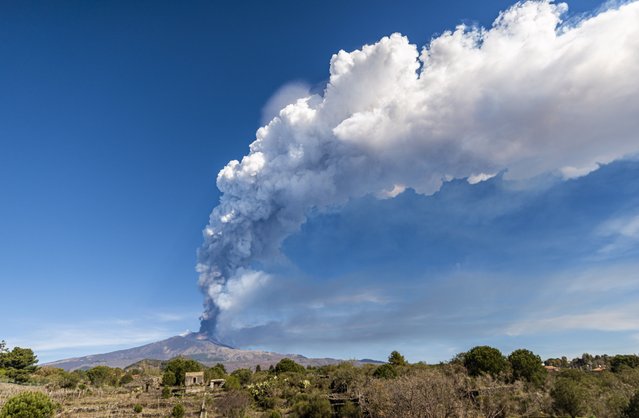 Eruption at Mount Etna, once again Volcano Etna produced a spectacular eruption, this is the twelfth time in twenty-five days. During all the night of March 12, strombolian activity at the Southeast Crater gradually increased, leading to a paroxysmal event after the dawn, the eruptive column several kilometers high was blown by the wind hitting the villages on the slopes of the volcano in an easterly direction, the event ceased in the late morning, photo taken from Nicolosi on March 12, 2021. (Photo by Salvatore Allegra/Anadolu Agency via Getty Images) 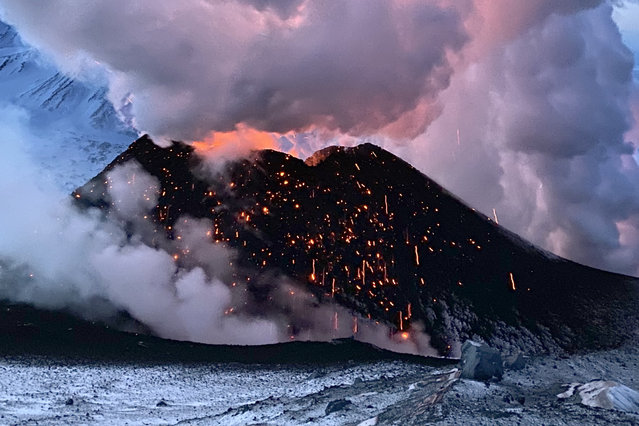 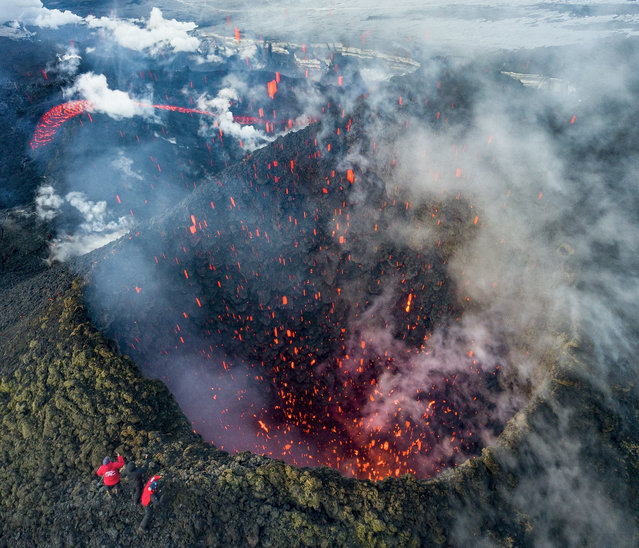 A picture taken with a drone on March 16, 2021 shows members of a local search and rescue squad taking pictures of Klyuchevskoy volcano eruption on Russia's far eastern Kamchatka peninsula. The eruption of a volcano on a Russian peninsula has attracted thrill-seeking tourists risking their lives for picturesque photos, prompting concerns in recent days from local emergency responders. (Photo by Maxim Fesyunov/AFP Photo) 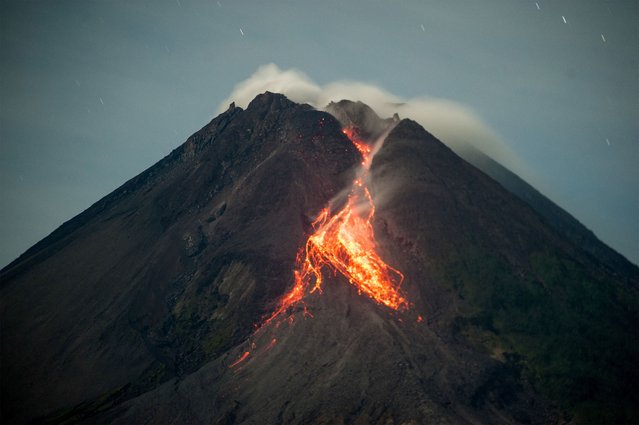 Lava flows from the crater of Mount Merapi as seen from Tunggularum, in Yogyakarta on February 23, 2021. (Photo by Agung Supriyanto/AFP Photo) 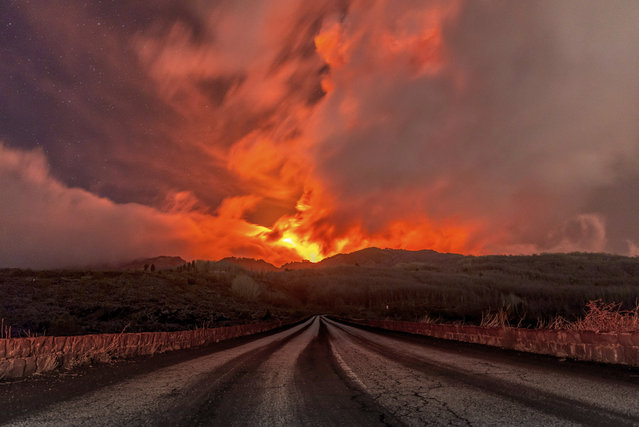 A glowing river of lava gushes from the slopes of Mt Etna, Europe's largest active volcano, near Zafferana Etnea, Sicily, early Wednesday, March 10, 2021. Today's activity is the 11th major eruption in the past few weeks. (Photo by Salvatore Allegra/AP Photo) 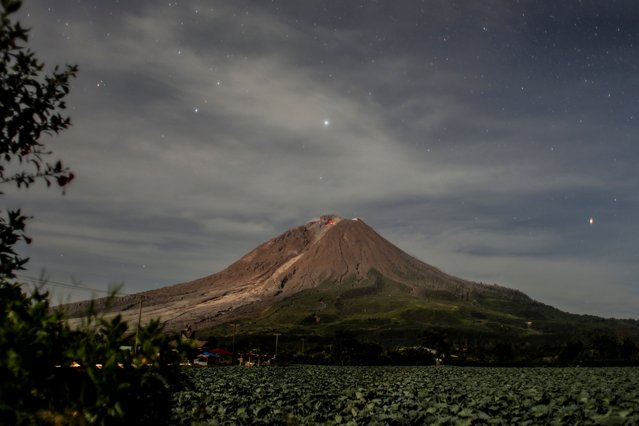 A long exposure picture shows molten lava spilling out from the crater of Mount Sinabung as seen from Naman Teran village in Karo, North Sumatra, Indonesia, 04 March 2021. Mount Sinabung, one of the most active volcanoes in Indonesia, erupted on 02 March, spewing volcanic materials 5,000 meters up in the air. Indonesia sits on the Pacific Ring of Fire, which accounts for 80 percent of the world's seismic activity. (Photo by Dedi Sinuhaji/EPA/EFE) 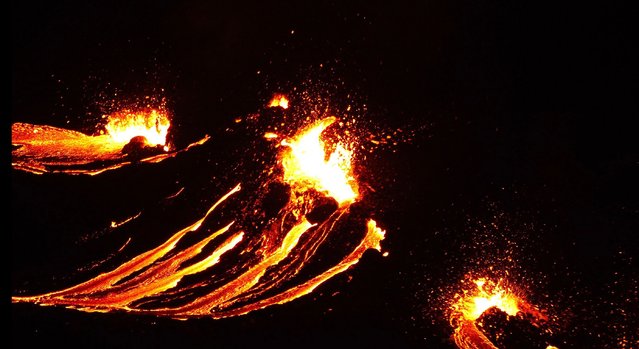 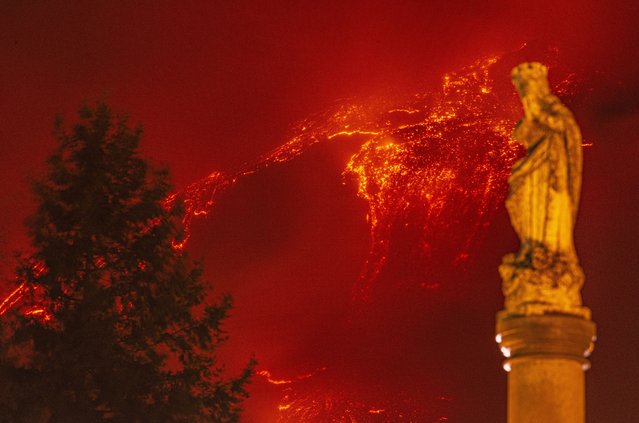 Mount Etna erupts near Sicily, Italy on March 15, 2021. This is the thirteenth time in twenty-eight days. During the early evening of 14 March and the night between 14 and 15 March a strombolian activity at the Southeast Crater gradually increased, leading to a paroxysmal event which had its peak around 01:00 am, ash blown by the wind touched the south-southeast slope of the volcano reaching also Catania, the event ceased completely around 3:45, photo taken from Milo near Catania on March 15, 2021. (Photo by Salvatore Allegra/Anadolu Agency via Getty Images)
Edit Del
24 Mar 2021 10:25:00, post received 0 comments
Publication archive:
←   →
Popular tags:
All tags
Last searches: