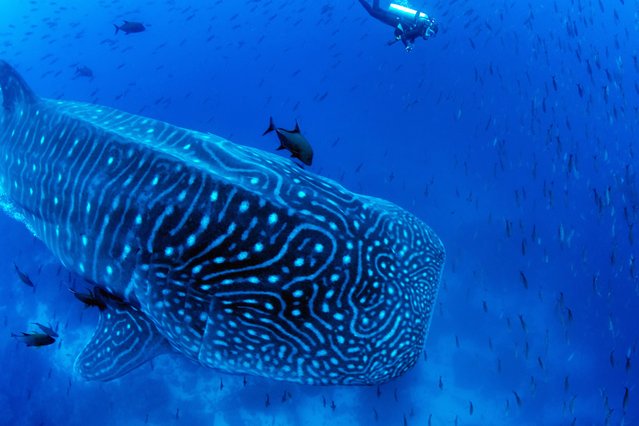 A procession of whale sharks pass by the rocky outcrop of lava and ash known as Darwin Arch, off Darwin Island to the north of the Galapagos Archipelago on July 2020. (Photo by Jonathan R. Green/The Guardian) 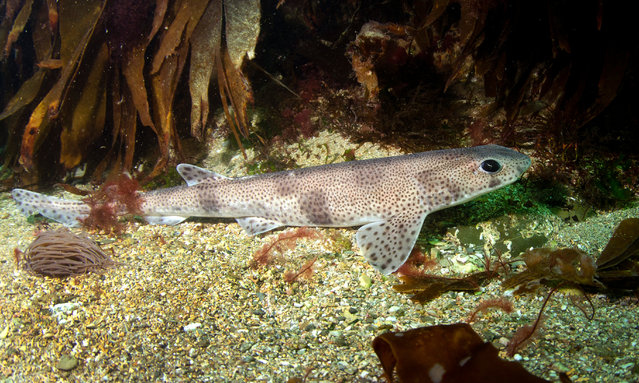 A small-spotted catshark. A study has revealed microfibres from fishing lines and nets, and materials from textiles were found in 67% of seabed-dwelling sharks in UK waters. (Photo by Charlotte Sams/Exeter University) 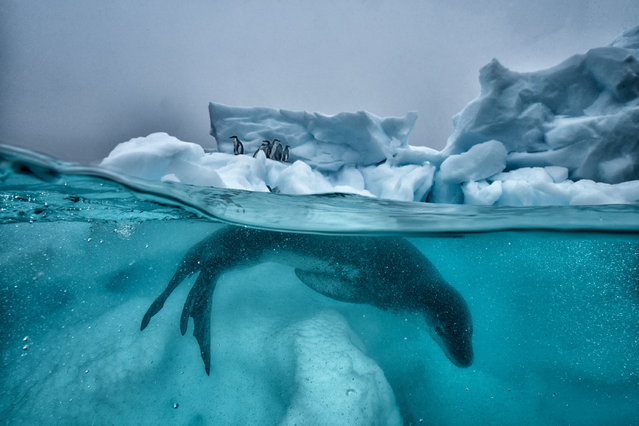 A leopard seal patrols the ice while penguins huddle for safety out of the water in Antarctica. Ocean photographers of all disciplines and experience levels – amateurs and professionals alike – are invited to submit their most impactful imagery for the Ocean Photography awards. (Photo by Cristina Mittermeier/The Guardian) 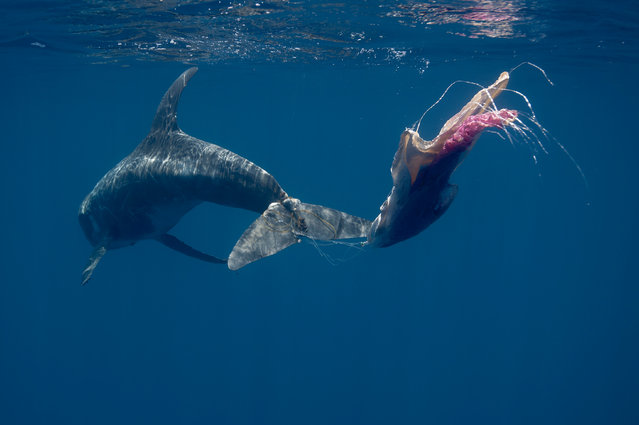 A Risso’s dolphin caught up in fishing line. Dolphin numbers in the Indian Ocean may have dropped by more than 80% in recent decades, with an estimated 4 million small cetaceans caught as “by-catch” in commercial tuna fishing nets since 1950, according to a study. (Photo by Andrew Sutton/Central Studio) 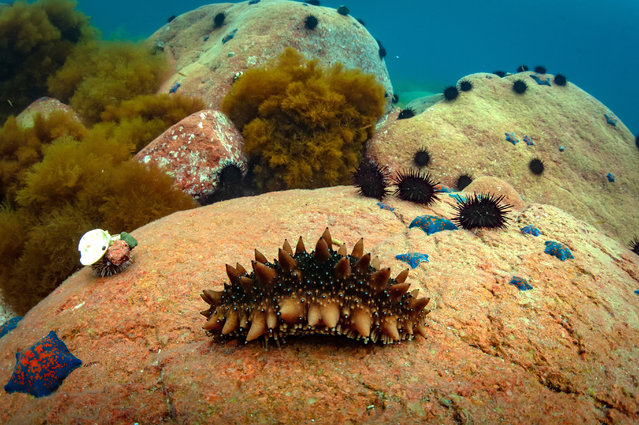 A Japanese spiky sea cucumber on a rock in the Peter the Great Gulf of the Sea of Japan near Vladivostok, Russia on July 4, 2020. (Photo by Yuri Smityuk/TASS) 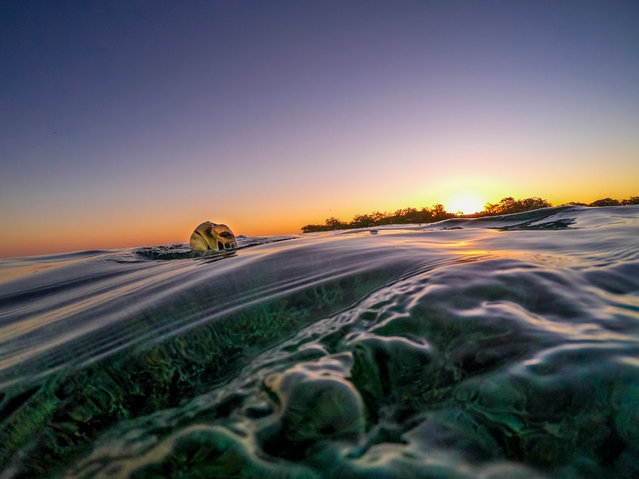 A turtle’s beak rises above the waters as the sun sets over the Great Barrier Reef off Queensland in Australia. Scientists from the Australian Institute of Marine Science are looking at how so-called super corals (corals that can resist increased water temperatures) could be used to save the reefs from bleaching. (Photo by Jonas Gratzer/The Guardian) 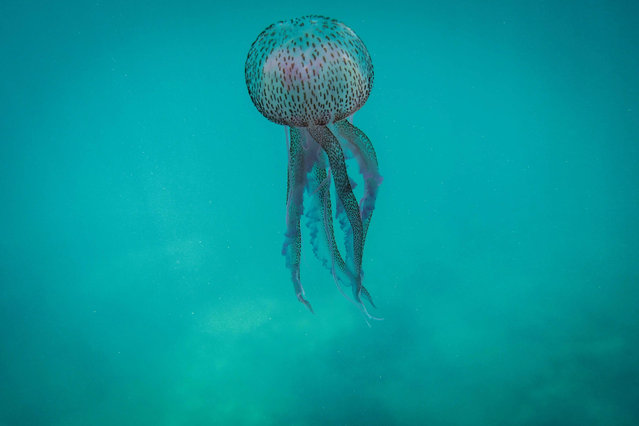 This underwater picture taken at a depth of five metres off the coast Lebanon's northern town of Qalamun on May 27, 2020 shows a Pelagia noctiluca (Medusa luminosa), a species of jellyfish commonly known as the mauve stinger, typically an offshore species widely distributed in all warm and temperate waters including the Mediterranean sea, Red Sea and Atlantic ocean. (Photo by Ibrahim Chalhoub/AFP Photo) 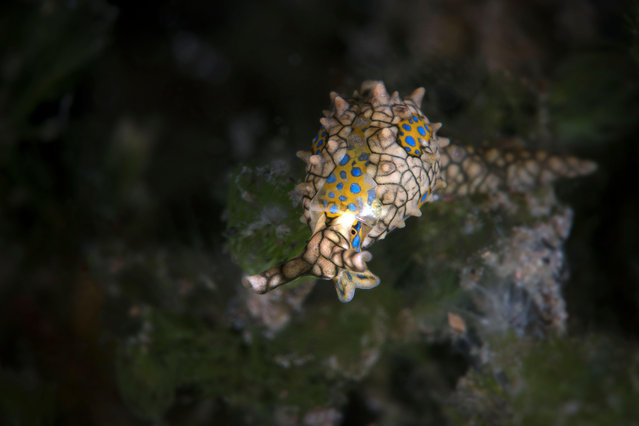 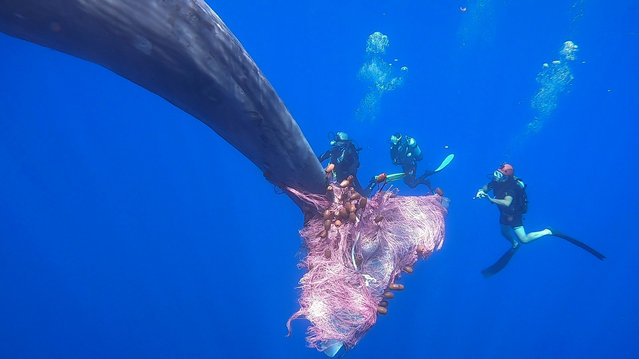 A grab taken from a handout video made available by the Italian Guard Coast (Guardia Costiera) shows GC divers working for hours to free a sperm whale from a fishnet in Mediterraneo Sea, off Sicily, Italy, 19 July 2020. A team of divers with biologists and coast guard followed for more than 48 hours off the island of Salina, in the Aeolian Islands, to free a sperm whale caught and injured in a fishing net illegal. (Photo by Carmelo Isgro/MuMa Museo del Mare di Milazzo/Reuters) 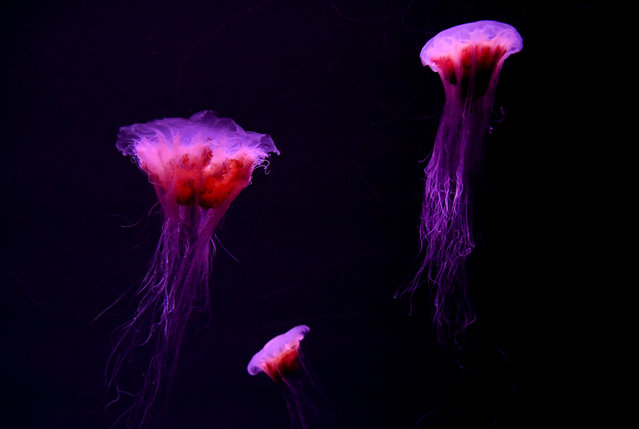 Lion's mane jellyfish swim in their display tank at Sea Life Melbourne Aqaurium in Melbourne on May 26, 2020. (Photo by William West/AFP Photo) 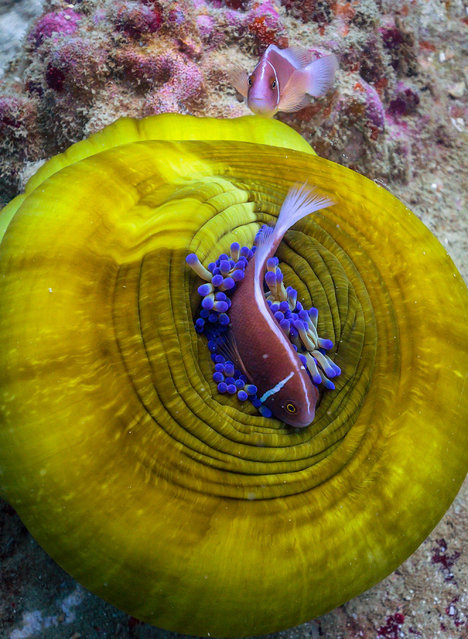 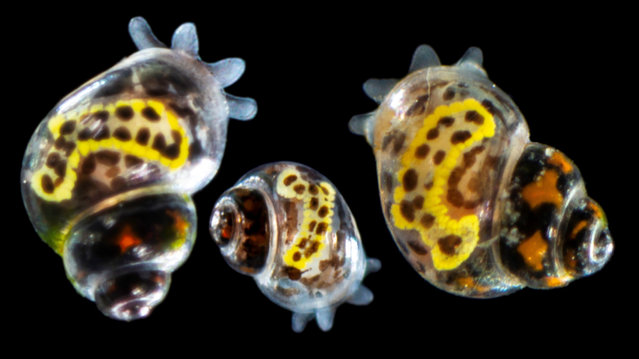 An undated handout photo made available by researcher Jesus Ortea on 27 February 2020 of a new sea snail species found in the bed of black chorale below a depth of 60 meters off Lanzarote island's coast, Canary Islands, Spain. The snail belongs to gender Rissoella species and it was named as late Spanish researcher Margarita Salas, who passed away at the same time the animal was found. (Photo by Jesus Ortea/University of Oviedo/EPA/EFE) 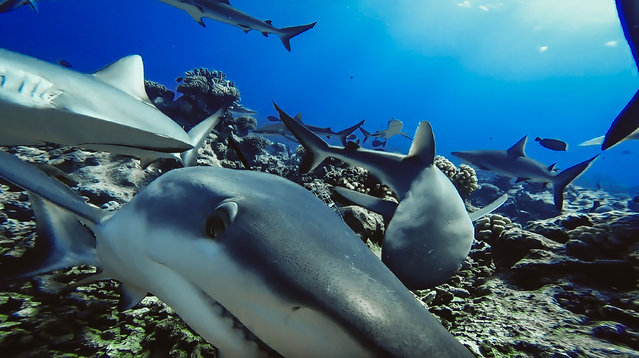 Grey reef sharks captured by baited remote underwater video system in French Polynesia. A new landmark study has revealed sharks are absent on many of the world’s coral reefs, indicating they are too rare to fulfill their normal role in the ecosystem, and have become “functionally extinct”. Of the 371 reefs surveyed in 58 countries, sharks were not observed on nearly 20 percent, indicating a widespread decline that has gone undocumented on this scale until now. The survey also identified conservation measures that could lead to recovery of these iconic predators. Essentially no sharks were detected on any of the reefs of six nations. (Photo by Global Finprint/AFP Photo) 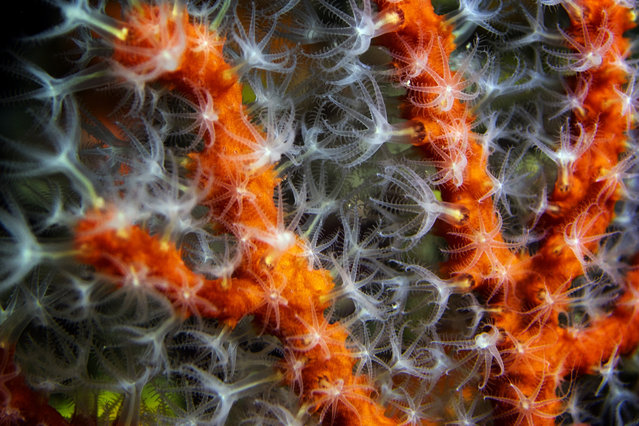 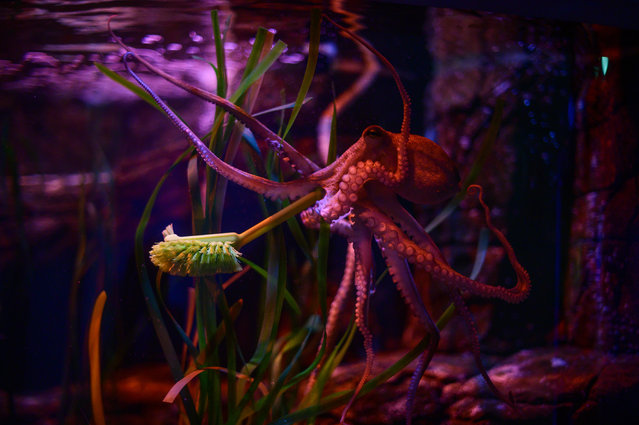 An octopus holds a cleaning brush during a publicity stunt at Berlin's Sealife aquarium on June 4, 2020, as the centre prepares to re-open to the public on June 6, 2020, amid a new coronavirus Covid-19 pandemic. (Photo by John MacDougall/AFP Photo) 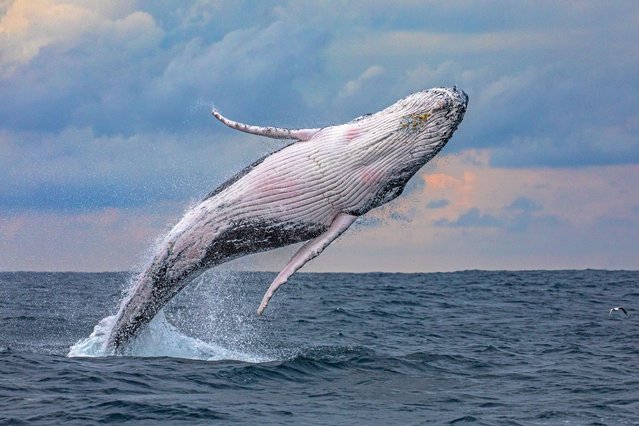 Yorkshire expat John Goodridge, 54, snapped the astonishing show by a pod of 40-ton humpbacks on a sealife-watching trip out of Sydney, Australia on July 2020. (Photo by John Goodridge/Cover Images) 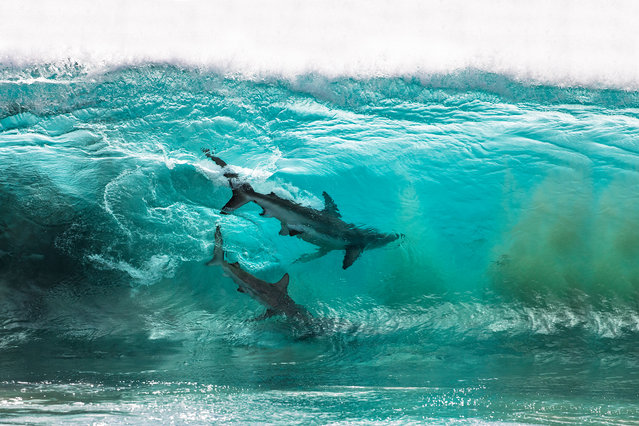 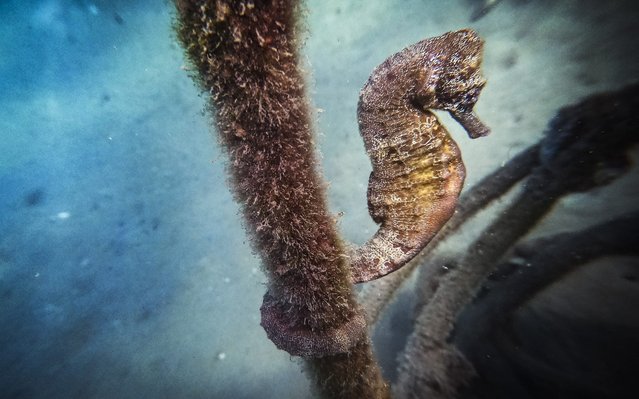 A seahorse in the depth of the Mediterranean sea in the coastal town of Olympos, in Antalya, Turkey on October 5, 2019. The ancient site of Olympos located in Antalya province and is an ancient Lycian-Roman town along the beach. Olympos, with its long history, ancient city remains, bungalows, the beach hosts caretta caretta eggs and alternative sport activities hosts the discovery enthusiasts and campers. (Photo by Ozge Elif Kizil/Anadolu Agency via Getty Images) 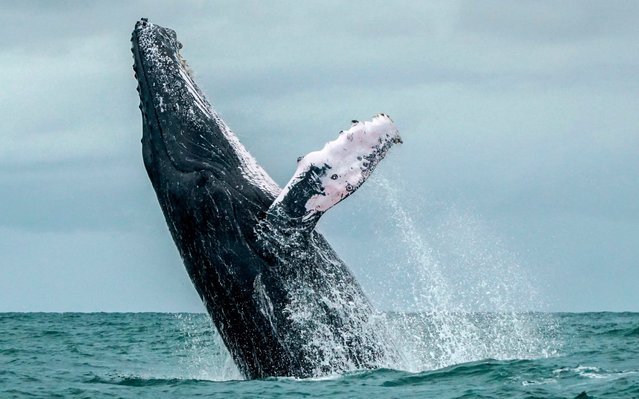