Fact Some Space Photos of 2016 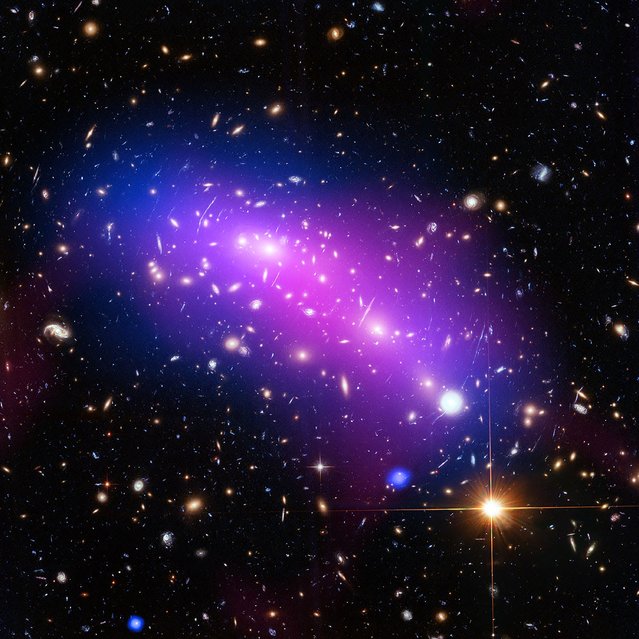 A multi-coloured haze which marks the site of two colliding galaxy clusters, forming a single object known as MACS J0416.1-2403, is seen in an undated NASA image which combines data from three different telescopes: the NASA/ESA Hubble Space Telescope (showing the galaxies and stars), the NASA Chandra X-ray Observatory (diffuse emission in blue), and the NRAO Jansky Very Large Array (diffuse emission in pink). MACS J0416 is located about 4.3 billion light-years from Earth, in the constellation of Eridanus. (Photo by Reuters/NASA/ESA) 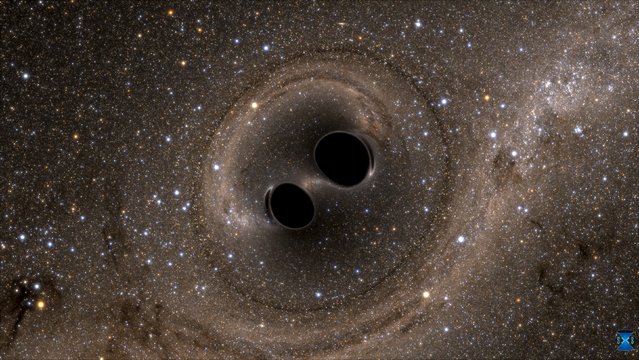 The collision of two black holes holes – a tremendously powerful event detected for the first time ever by the Laser Interferometer Gravitational-Wave Observatory, or LIGO – is seen in this still image from a computer simulation released in Washington February 11, 2016. Scientists have for the first time detected gravitational waves, ripples in space and time hypothesized by Albert Einstein a century ago, in a landmark discovery announced on Thursday that opens a new window for studying the cosmos. (Photo by Reuters/Caltech/MIT/LIGO Laboratory) 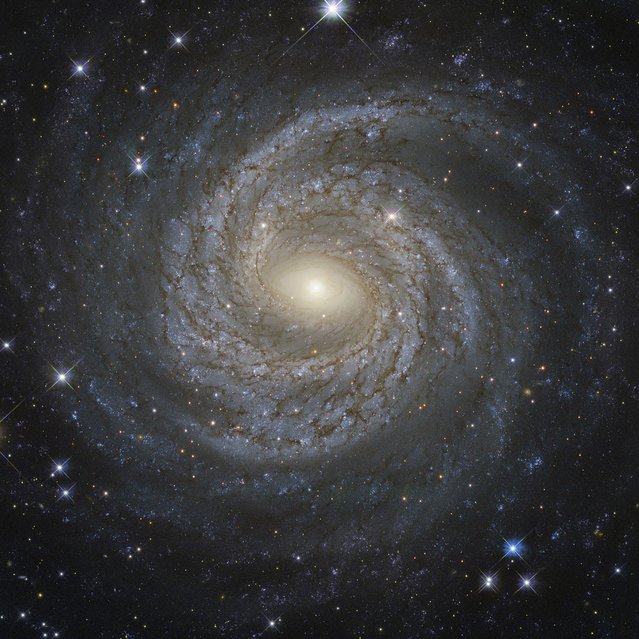 A NASA/ESA Hubble Space Telescope image shows a spiral galaxy NGC 6814, whose luminous nucleus and spectacular sweeping arms, rippled with an intricate pattern of dark dust, is a highly variable source of X-ray radiation, causing scientists to suspect that it hosts a supermassive black hole with a mass about 18 million times that of the Sun. (Photo by Reuters/NASA) 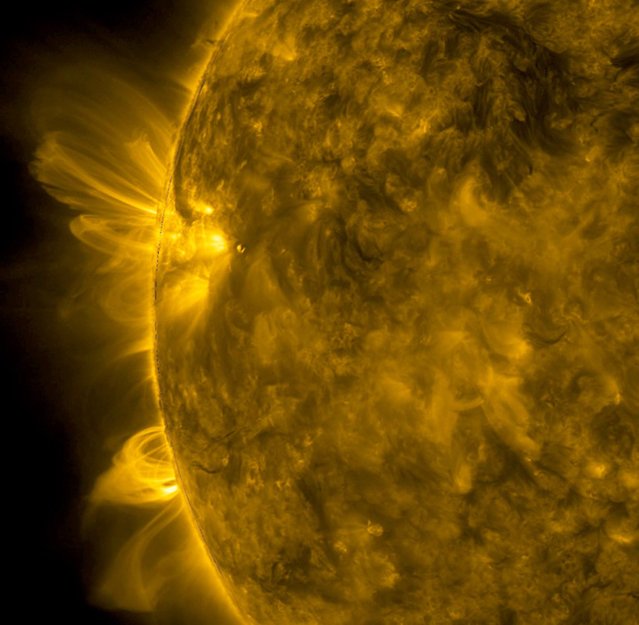 A handout picture made available by NASA's Solar Dynamics Observatory (SDO) on 21 April 2016 shows arches of magnetic field lines towered over the edge of the Sun as a pair of active regions began to rotate into view, in space, 05 April 2016. Active regions are intense areas of competing magnetic forces that are embedded below the Sun's surface. (Photo by EPA/NASA/SDO) 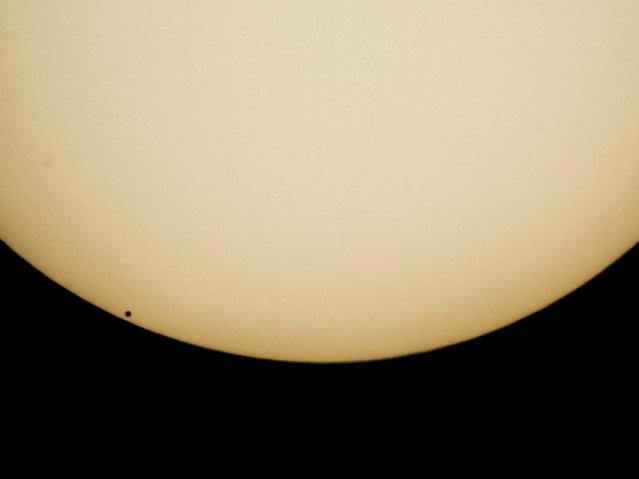 The transit of Mercury (L, bottom) in front of the Sun is seen from Salgotarjan, 109 kilometers northeast of Budapest, Hungary, 09 May 2016. A transit of Mercury across the Sun takes place when the planet comes between the Sun and the Earth, and Mercury is seen as a small black dot moving across the face of the Sun. (Photo by Peter Komka/EPA) 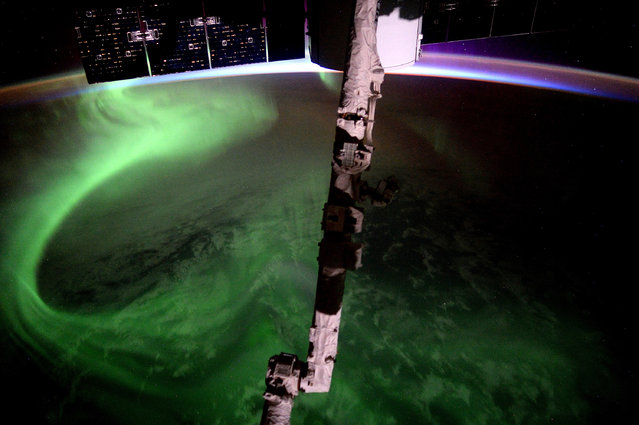 This handout image supplied by the European Space Agency (ESA), shows the Aurora Australis, southern lights, in an image taken by ESA astronaut Tim Peake from the International Space Station on April 17, 2016. ESA astronaut Tim Peake is performing more than 30 scientific experiments and taking part in numerous others from ESA's international partners during his six-month mission, named Principia, after Isaac Newtons ground-breaking Naturalis Principia Mathematica, which describes the principal laws of motion and gravity. (Photo by Tim Peake/ESA/NASA via Getty Images) 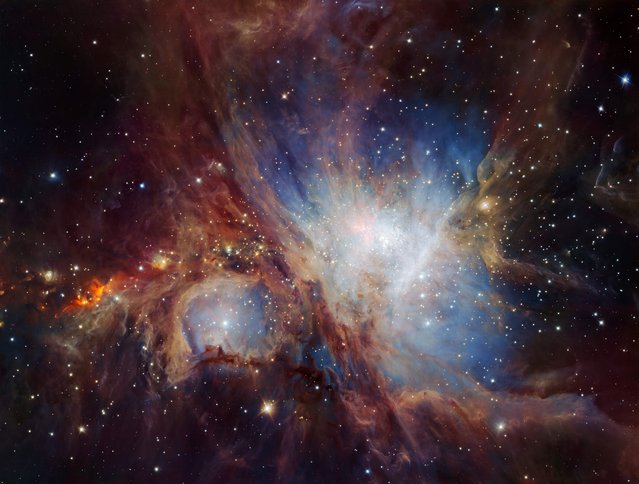 A handout photo released on July 11, 2016 by the European Southern Observatory shows the Orion Nebula star-formation region obtained from multiple exposures using the HAWK-I infrared camera on ESOs Very Large Telescope in Chile. This is the deepest view ever of this region and reveals more very faint planetary-mass objects than expected. (Photo by H. Drass/AFP Photo/European Southern Observatory) 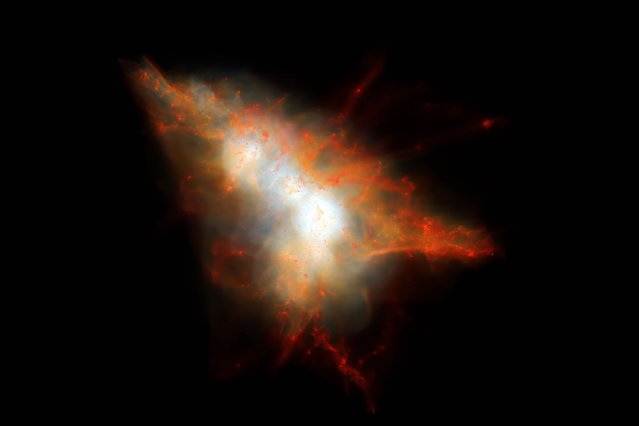 A handout photo released on September 19, 2016 by the European Southern Observatory shows a snapshot from a cosmological simulation of a Lyman-alpha Blob similar to LAB-1. This simulation tracks the evolution of gas and dark matter using one of the latest models for galaxy formation running on the NASA Pleiades supercomputer. This view shows the distribution of gas within the dark matter halo, colour coded so that cold gas (mainly neutral hydrogen) appears red and hot gas appears white. Embedded at the centre of this system are two strongly star-forming galaxies, but these are surrounded by hot gas and many smaller satellite galaxies that appear as small red clumps of gas here. Lyman-alpha photons escape from the central galaxies and scatter off the cold gas associated with these satellites to give rise to an extended Lyman-alpha Blob. (Photo by J. Geach/D. Narayanan/R. Crain/AFP Photo/European Southern Observatory) 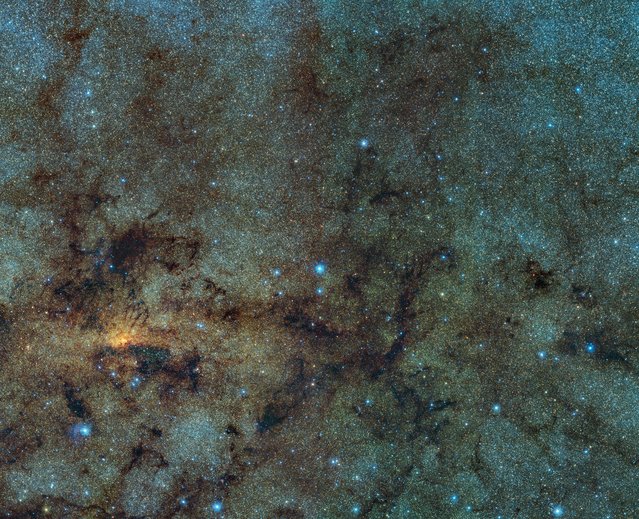 This handout image captured with the VISTA infrared survey telescope, as part of the Variables in the Via Lactea (VVV) ESO public survey and released by the European Southern Observatory on October 10, 2016 shows the central part of the Milky Way. While normally hidden behind obscuring dust, the infrared capabilities of VISTA allow to study the stars close to the galactic centre. Within this field of view astronomers detected several ancient stars, of a type known as RR Lyrae. As RR Lyrae stars typically reside in ancient stellar populations over 10 billion years old, this discovery suggests that the bulging centre of the Milky Way likely grew through the merging of primordial star clusters. (Photo by D. Minniti/AFP Photo/European Southern Observatory)

This image obtained October 21, 2016 from NASA of the sunlit part of Jupiter and its swirling atmosphere was created by a citizen scientist (Alex Mai) using data from Juno's JunoCam instrument. (Photo by AFP Photo/NASA) 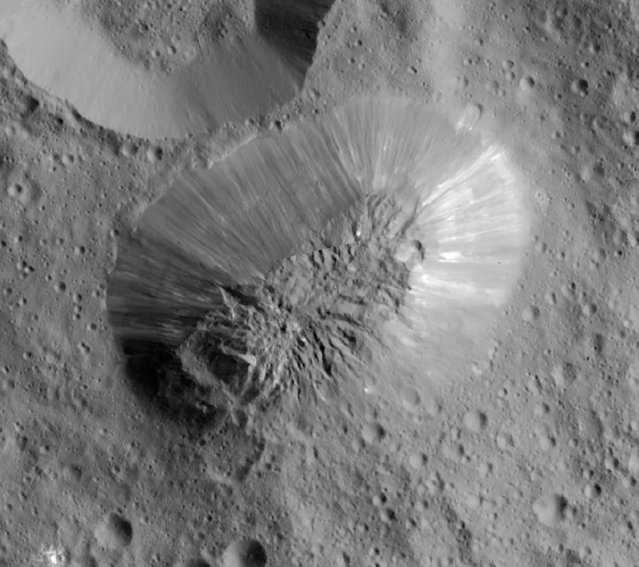 This image provided by NASA, shows an inactive volcano on the surface of Ceres, the largest object in the asteroid belt between Mars and Jupiter. Scientists said the volcano on the dwarf planet Ceres is about half as tall as Mount Everest. (Photo by NASA/JPL-Caltech/UCLA/MPS/DLR/IDA via AP Photo) 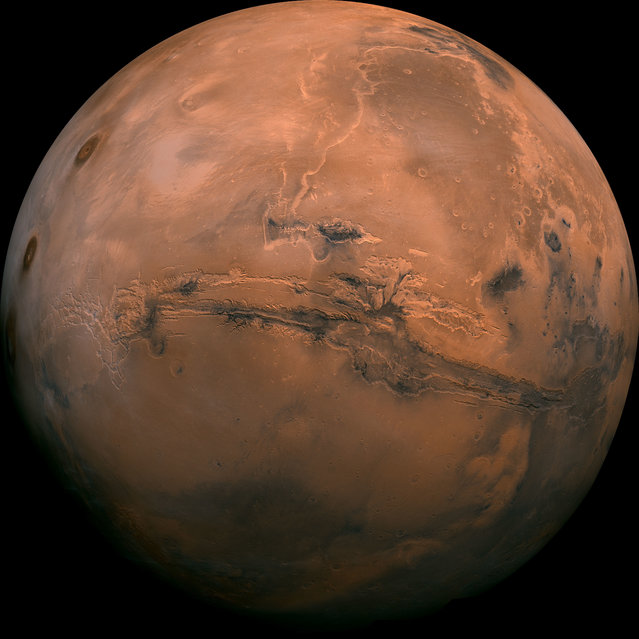 This image provided by NAS shows the plant Mars. President Barack Obama sought Tuesday, October 11, 2016, to reinvigorate his call for the U.S. to send humans to Mars by the 2030s, showcasing budding partnerships between the U.S. government and commercial companies to develop spacecraft capable of carrying out the extraterrestrial mission. (Photo by NASA via AP Photo) 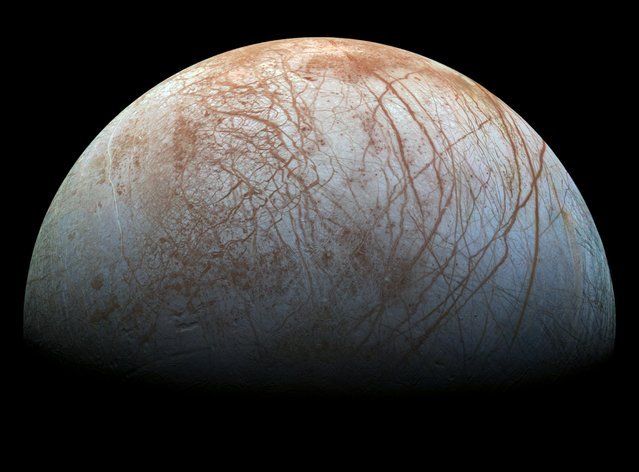 Europa's icy surface is fractured and crisscrossed with broken ice – one hint that there is a liquid water ocean hiding underneath. (Photo by NASA/JPL-Caltech/SETI Institute) 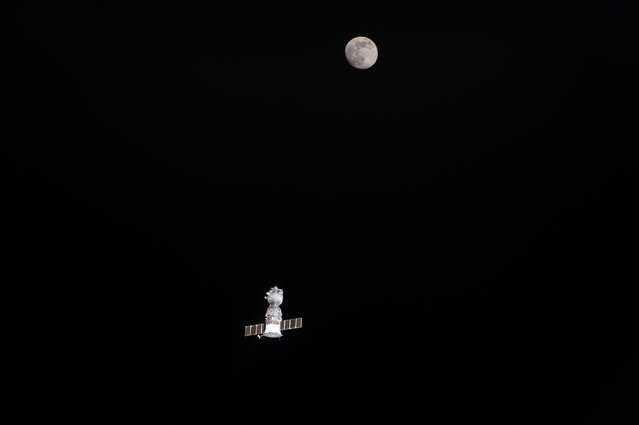 The departing Soyuz TMA-19M spacecraft and the nearly full Moon were framed in this image from Expedition 47/48 crew member Jeff Williams of NASA. Onboard the spacecraft, Tim Kopra of NASA, Tim Peake of ESA and Yuri Malenchenko were returning to Earth after 186 days in space. (Photo by NASA) 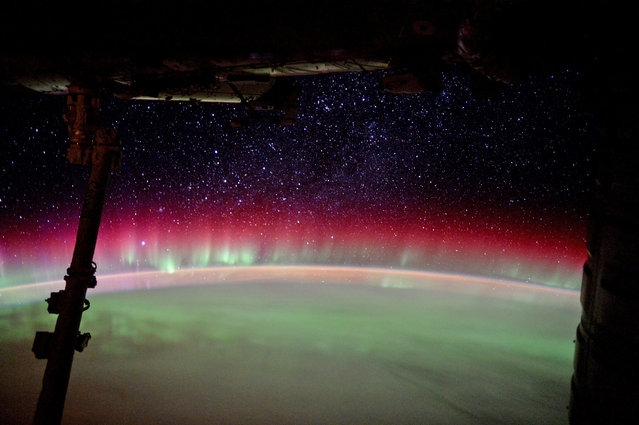 ESA astronaut Tim Peake posted this stunning image on his social media channels, commenting: “Station passed through magnificent aurora Australis last night”. Tim is set to return to Earth on 18 June 2016, bringing his six-month Principia mission to the ISS to an end. During his stay he performed more than 30 scientific experiments for ESA and taking part in numerous others from ESA's international partners. ESA and the UK Space Agency have partnered to develop many exciting educational activities around the Principia mission, aimed at sparking the interest of young children in science and space. (Photo by Tim Peake/ESA/NASA) This NASA image obtained April 15, 2016 shows The spider part of The Spider and the Fly nebulae, IC 417 in star formation, as seen in this infrared image from NASA's Spitzer Space Telescope and the Two Micron All Sky Survey (2MASS). Located in the constellation Auriga, IC 417 lies about 10,000 light-years away. It is in the outer part of the Milky Way, almost exactly in the opposite direction from the galactic center. A cluster of young stars called “Stock 8” can be seen (centerR). The light from this cluster carves out a bowl in the nearby dust clouds, seen here as green fluff. Along the sinuous tail in the center and to the left, groupings of red point sources are also young stars. In this image, infrared wavelengths, which are invisible to the unaided eye, have been assigned visible colors. Light with a wavelength of 1.2 microns, detected by 2MASS, is shown in blue. The Spitzer wavelengths of 3.6 and 4.5 microns are green and red, respectively. (Photo by AFP Photo/NASA) 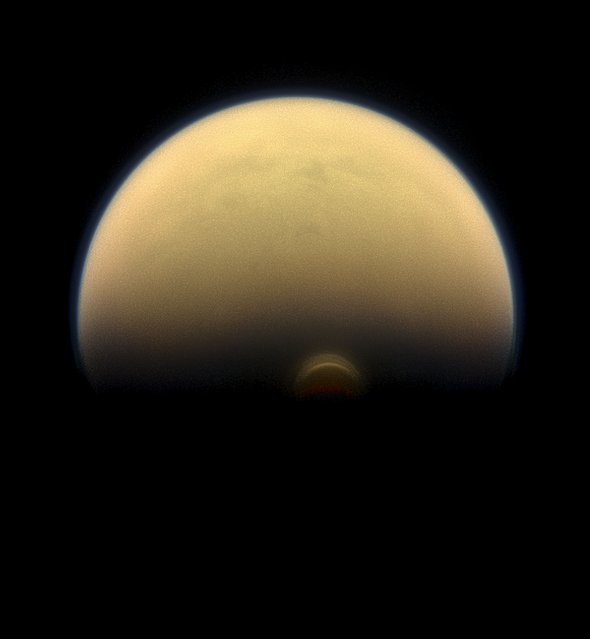 In this image released by NASA, the south polar vortex at Saturn's moon Titan still stands out against the orange and blue haze layers that are characteristic of Titan's atmosphere. Images like this, from NASA's Cassini spacecraft, lead scientists to conclude that the polar vortex clouds form at a much higher altitude – where sunlight can still reach – than the lower-altitude surrounding haze. (Photo by AFP Photo/NASA/JPL-Caltech/Space Science Institute)

This new Hubble image shows IRAS 14568-6304, a young star that is cloaked in a haze of golden gas and dust. It appears to be embedded within an intriguing swoosh of dark sky, which curves through the image and obscures the sky behind. This dark region is known as the Circinus molecular cloud. This cloud has a mass around 250 000 times that of the Sun, and it is filled with gas, dust and young stars. Within this cloud lie two prominent and enormous regions known colloquially to astronomers as Circinus-West and Circinus-East. Each of these clumps has a mass of around 5000 times that of the Sun, making them the most prominent star-forming sites in the Circinus cloud. The clumps are associated with a number of young stellar objects, and IRAS 14568-6304, featured here under a blurry fog of gas within Circinus-West, is one of them. IRAS 14568-6304 is special because it is driving a protostellar jet, which appears here as the “tail” below the star. This jet is the leftover gas and dust that the star took from its parent cloud in order to form. While most of this material forms the star and its accretion disc – the disc of material surrounding the star, which may one day form planets – at some point in the formation process the star began to eject some of the material at supersonic speeds through space. This phenomenon is not only beautiful, but can also provide us with valuable clues about the process of star formation. IRAS 14568-6304 is one of several outflow sources in the Circinus-West clump. Together, these sources make up one of the brightest, most massive, and most energetic outflows ever reported. Scientists have even suggested calling Circinus-West the “nest of molecular outflows” in tribute to this activity. A version of this image was entered into the Hubble's Hidden Treasures image processing competition by contestant Serge Meunier. Released May 30, 2016. (Photo by ESA/Hubble & NASA Acknowledgemen) 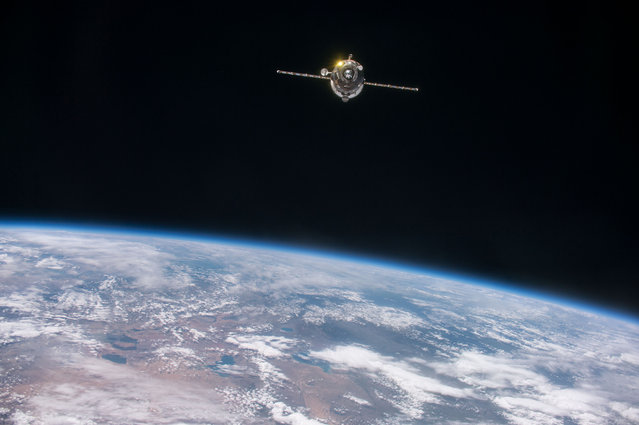 The undocked Russian Progress 62 spacecraft backs away from the International Space Station for a test of the upgraded tele-robotically operated rendezvous system, or the TORU manual docking system. (Photo by NASA) 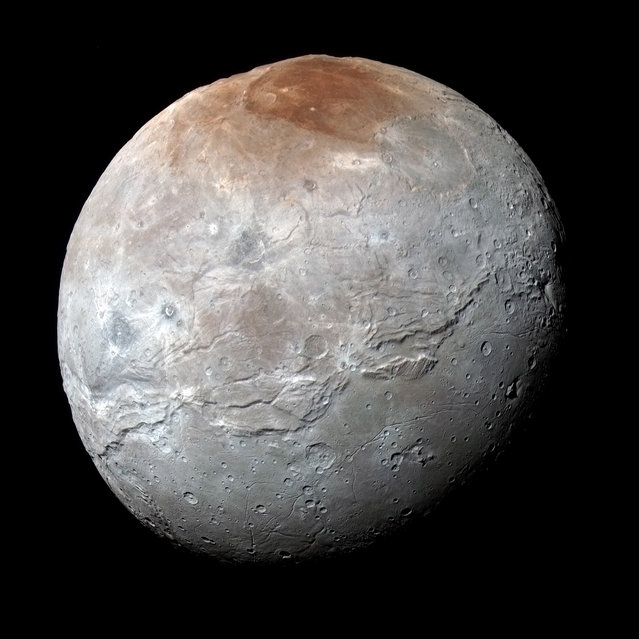 Pluto's largest moon, Charon, is seen in a high-resolution, enhanced color view captured by NASA's New Horizons spacecraft on July 14, 2015 and released September 15, 2016. Scientists have learned that reddish material in the north (top) polar region is chemically processed methane that escaped from Pluto's atmosphere onto Charon. (Photo by NASA/JHUAPL/SwRI) 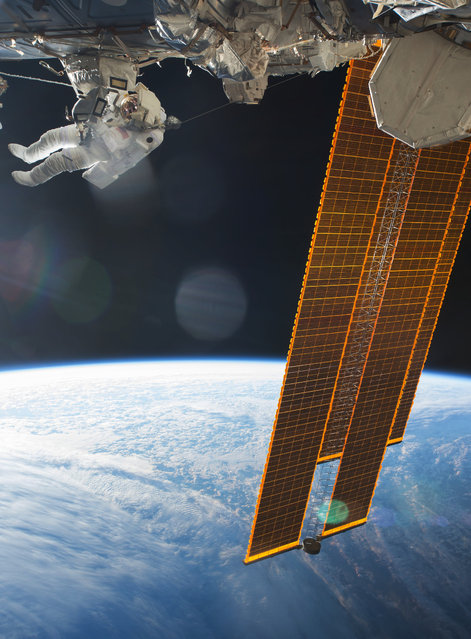 Expedition 48 Commander Jeff Williams and Flight Engineer Kate Rubins (pictured) of NASA conducted a five-hour and 58-minute spacewalk on August 19, 2016. The pair installed the first of two international docking adapters (IDAs) that will be used for the future arrivals of Boeing and SpaceX commercial crew spacecraft in development under NASA's Commercial Crew Program. Commercial crew flights from Florida's Space Coast to the International Space Station will restore America's human launch capability and increase the time U.S. crews can dedicate to scientific research, which is helping prepare astronauts for deep space missions, including the journey to Mars. (Photo by NASA) 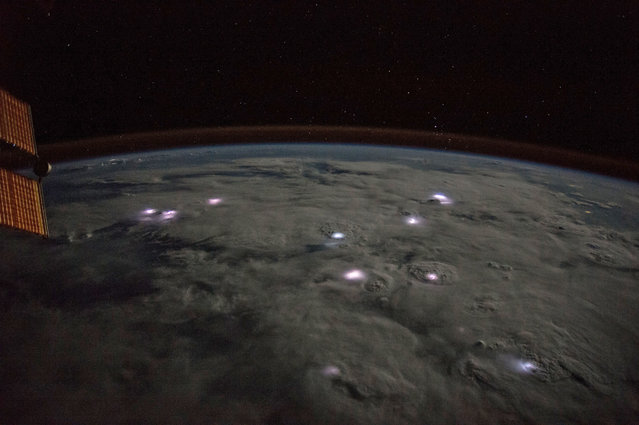 The International Space Station flies approximately 250 miles over thunderstorms visible during a nighttime pass. Lightning can be seen flashing brightly inside the clouds below. (Photo by NASA) 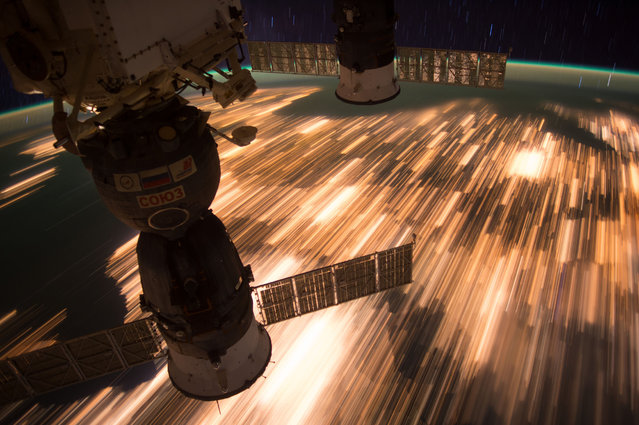