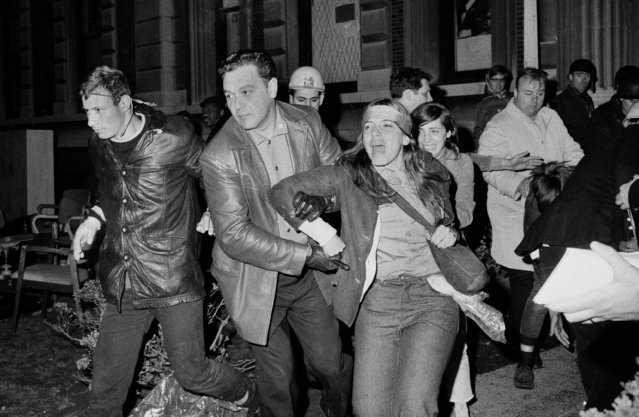 In this April 30, 1968 file photo, a student protester at Columbia University is forcibly removed from the campus by plainclothes New York City police after they entered buildings occupied by the students, and ejected those participating in the sit-ins. Fifty years ago, more than 700 protesters were arrested and more than 130 were injured when police retook the occupied buildings, during what was part of a year of global turmoil. (Photo by Dave Pickoff/AP Photo) 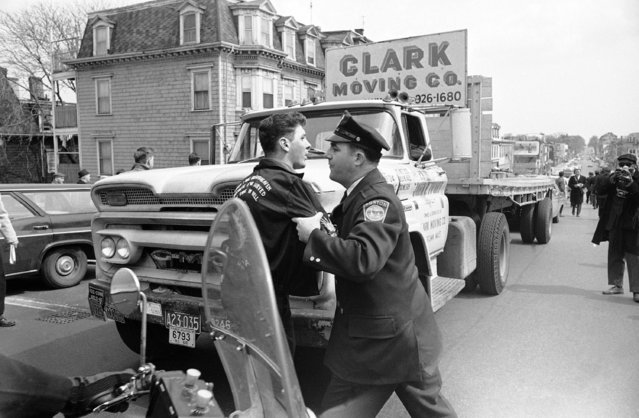 A Boston policeman seizes unidentified youth who sought to interfere with march by group of clergymen and pacifists in South Boston, April 6, 1966. The march was called to assert right to dissent “as the cornerstone of American democracy” in statement signed by 19 clergymen organizers. Group also protested lack of police protection when draft card burners were beaten by youths on steps of South Boston courthouse last week. One hundred fifty police guarded marchers. Youth wears jacket sometimes worn by veterans. (Photo by J. Walter Green/AP Photo) 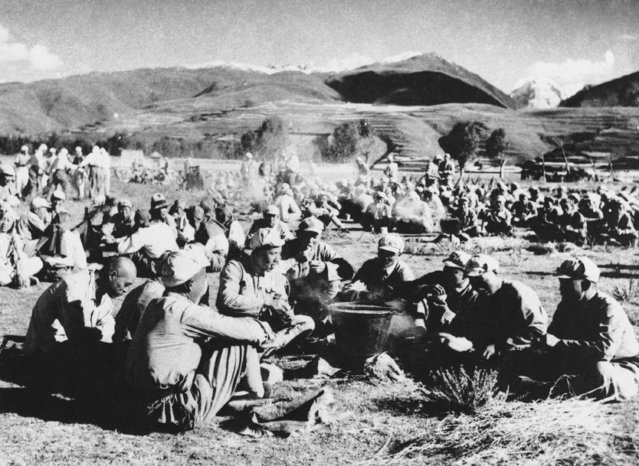 Chinese Communists are shown at a camp in Tibet, December 5, 1950. (Photo by AP Photo) 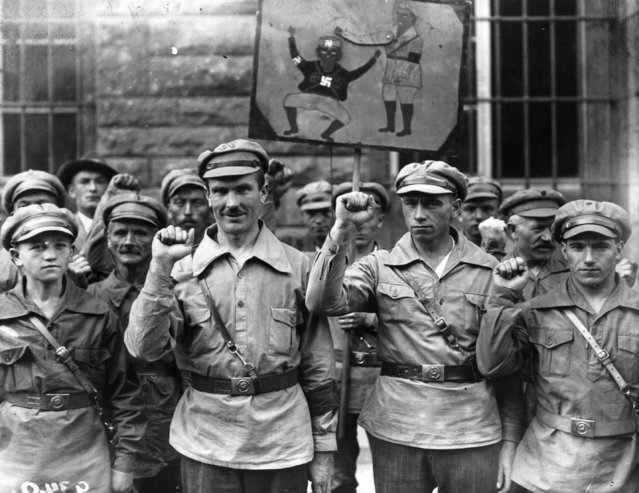 Members of the far-left Antifa extremist organization give a clenched fist salute on September 1, 1928. The group's original intent was to bring out a communist dictatorship in Germany. (Photo by Fox Photos/Getty Images) 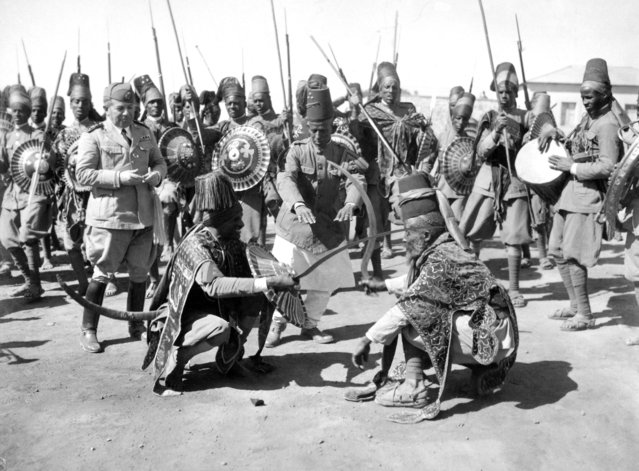 Rhythmic two-step by two Askari Chiefs during a ceremonial war dance held by Askaris – native troops employed by the Italians – to celebrate victory on December 16, 1935. An Italian officer is seen looking on. (Photo by AP Photo) 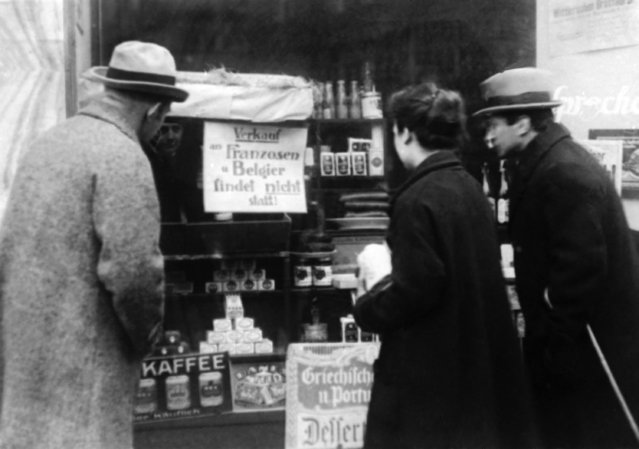 German dealers have agreed to refused to sell food to French and Belgians in Berlin, February 8, 1923, as their part in the request by the Nationalists to show their protest for the invasion of the Ruhr. (Photo by AP Photo) 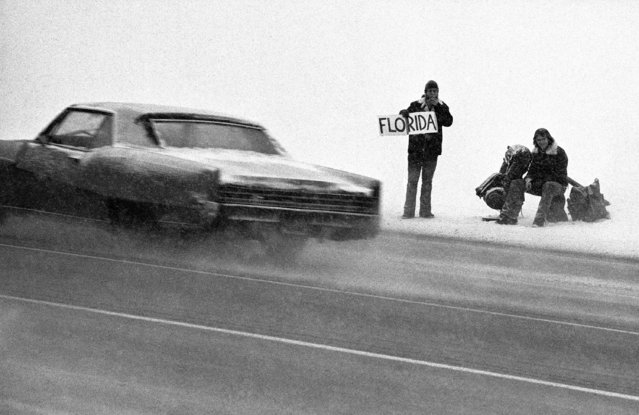 Two young men stand in a driving snow storm on Interstate 75 on Detroit's North Side, February 15, 1975, seeking a ride south to the sun. Southern and lower Michigan is expected to receive about 2 to 4 inches of the soft white powder. (Photo by AP Photo/JCH) 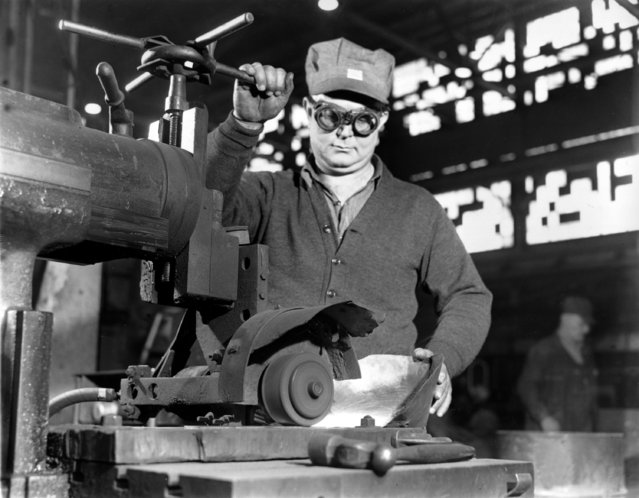 Charles E. Gaskins works at an emery wheel in the Norfolk Navy Yard as he helps turn out fighting ships for the war effort in Portsmouth, Va., on February 28, 1942. (Photo by AP Photo) 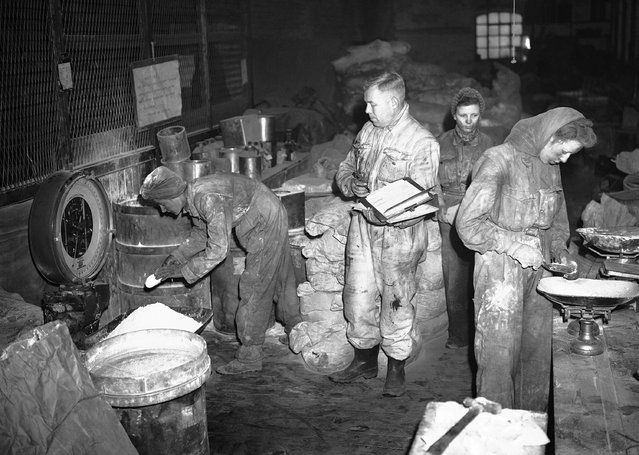 A busy scene in the drug room of a rubber reclamation factory, somewhere in England, on January 17, 1942. Here chemist mix ingredients which are themselves mixed with the reclaimed rubber to make it suit all kinds of different trade requirements. (Photo by AP Photo) 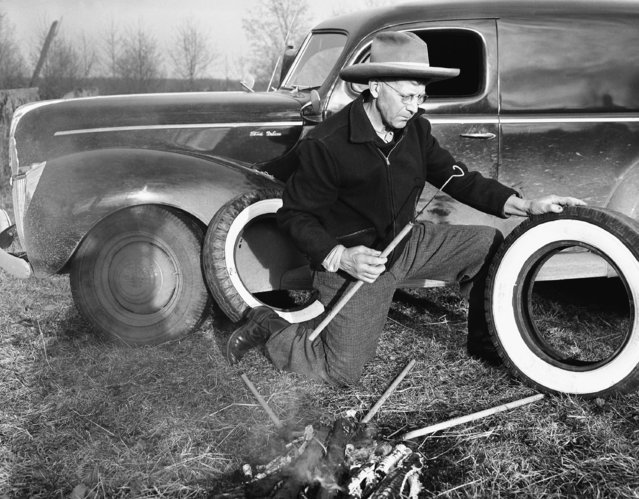 This Pacific Northwest “rancher” decided the best way to keep his tires identified, was to resort to old fashioned branding methods in Seattle, Washington on January 31, 1942. He whipped up some brick branding irons, built a regular branding fire, and proceeded to burn his own identification on his tires. (Photo by AP Photo) 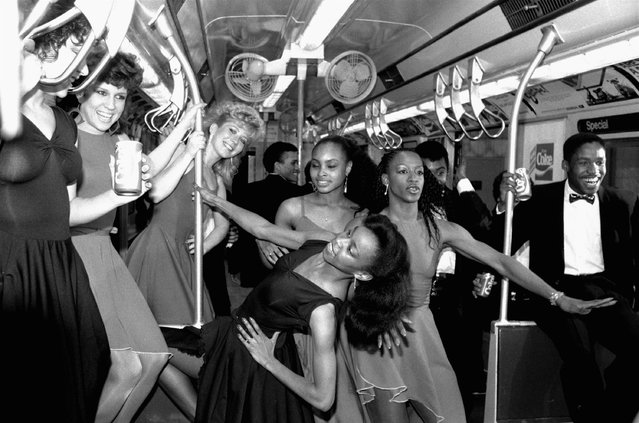 Members of the Apollo Rainbow Dancers stretch out in special A train late on May 4, 1985, in New York. The legendary Apollo Theatre celebrated its 50th anniversary in an official reopening after a 15 month refurbishing with a celebrity studded evening. (Photo by Ray Stubblebine/AP Photo) 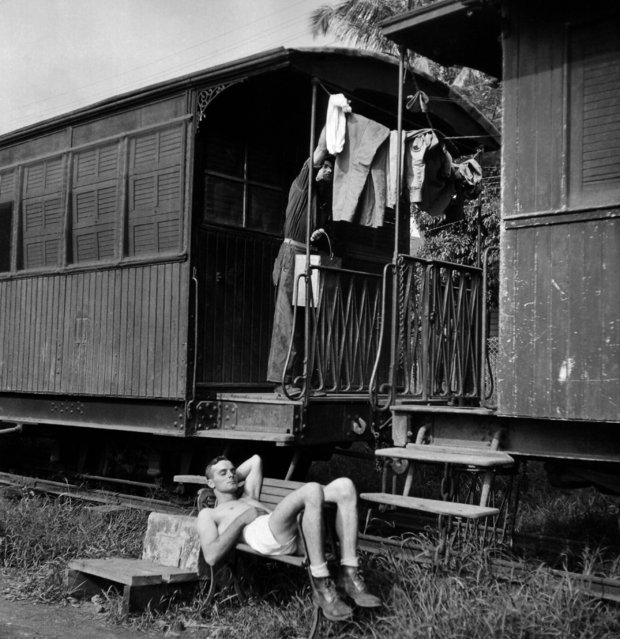 Sgt. Howard Barnes, Sullivan, Ind., takes a sunbath somewhere on a South Pacific island on May 8, 1943. He is night motor sergeant and former mechanic for the Army run railroad. (Photo by Ralph Morse/AP Photo/Life) 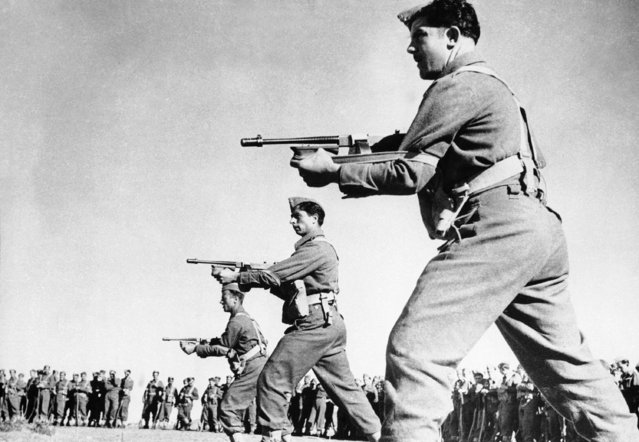 These soldiers practicing a charge with Tommy guns, are members of a New Greek army now in training with the British Army in the Middle East, Libya on May 4, 1942. The army is composed of men who fought against the Italians in Greece, others who escaped from their homeland after the Nazi occupation and Greek residents of the Middle East. They are commanded by their own officers. (Photo by AP Photo) 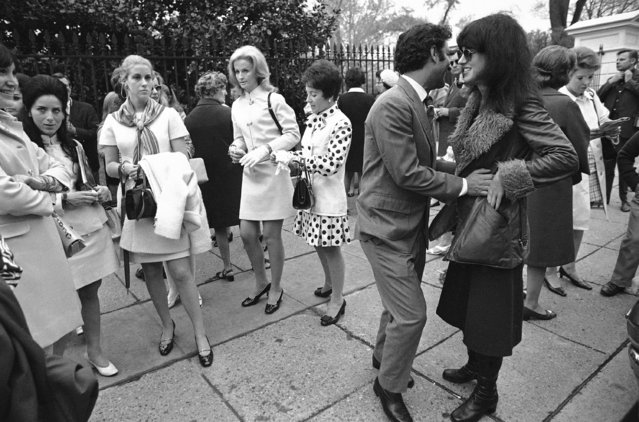 Yippie leader Abbie Hoffman and rock singer Grace Slick, stand outside the White House fence after they were turned away from a ladies' tea for Finch College Alumnae which Tricia Nixon was hosting in Washington, April 25, 1970. Hoffman was to be Miss Slick's “bodyguard” but not being a Finch alumna neither of them were able to chat with the president's daughter. (Photo by AP Photo) 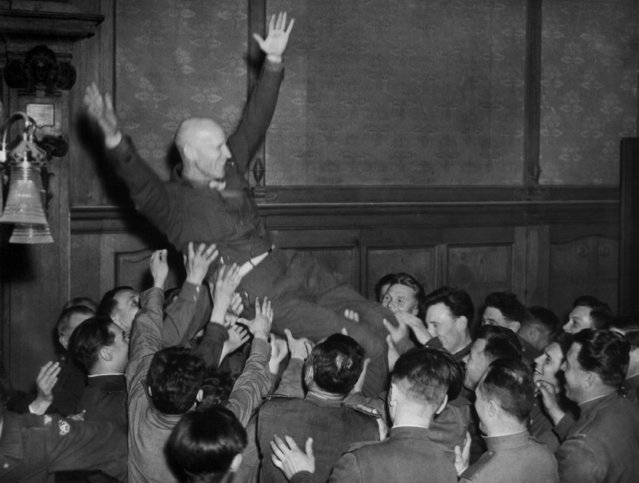 Gen. Wiulliam H. Simpson of the U.S. Ninth Army smiles broadly and waves his arms as he is tossed by Russian officers at a banquet in his honor on Russian held territory in Germany on May 18, 1945. Col. Gen. Sviataiev, commander of the 33rd Russian Army was host. Gen. Simpson was tossed three times by Russians in whose country it is a sign of great honor. (Photo by AP Photo) 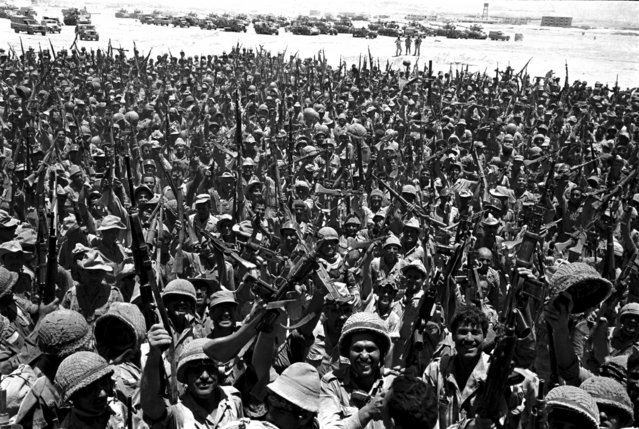 Israeli soldiers are jubilating after Israel's invasion of the Sinai during the six day war of Israel, in the Sinai, Egypt, June 10, 1967. (Photo by AP Photo) 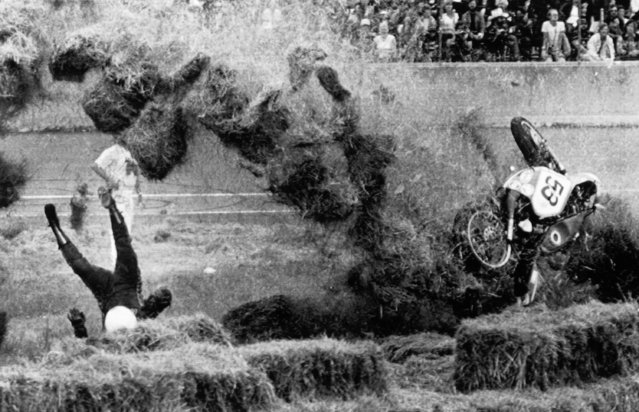 Nicholas Richichi of Fresh Meadows, New York flies upside down after hitting the retaining walls of hay at the Daytona International Speedway during the running of the 39th Annual Daytona 200 Motorcycle Classic in Daytona Beach, Florida on March 9, 1980. There has been no report on injuries to Richichi. The race was stopped afterward because of rain. (Photo by AP Photo/RS) 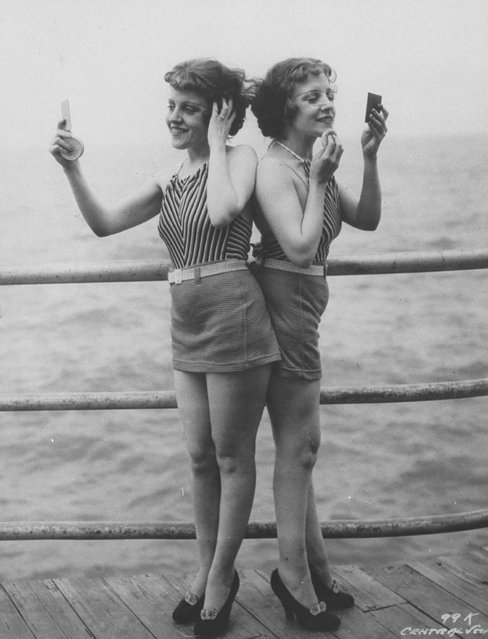 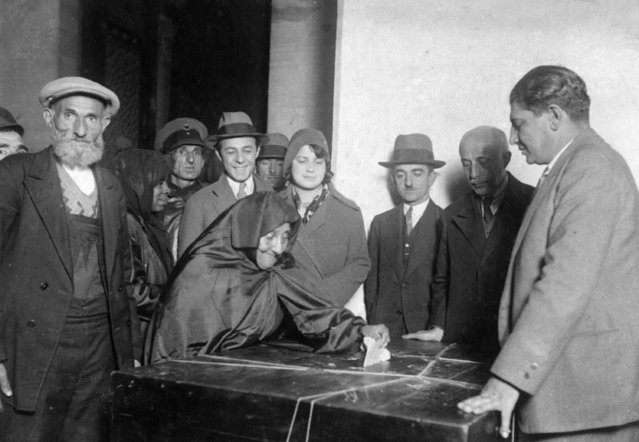 A Turkish woman casts her ballot in an Istanbul municipal election, October 21, 1930. This is the first time women in Turkey can vote. (Photo by AP Photo) 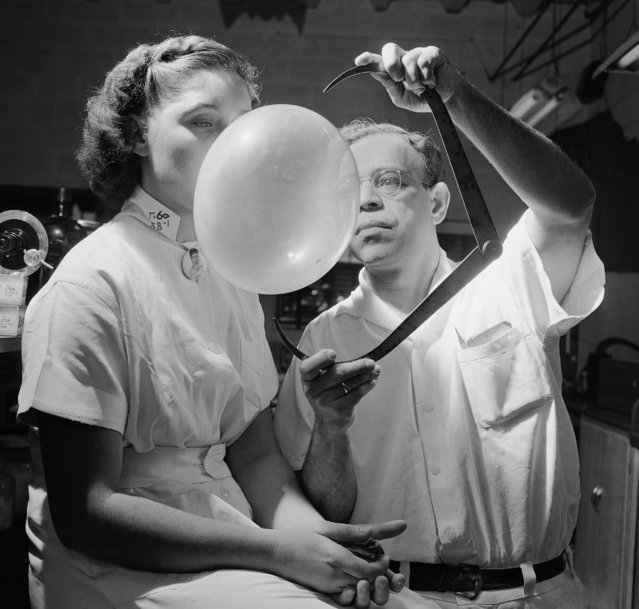 Dr. Morris Nafash, whose job it is as research director for the Bazooka Bubble Gum Company to test the texture and elasticity of the gum and to develop new flavors, uses an outside caliper to measure a bubble blown by Josephine Zack on September 16, 1949 in New York. Dr. Nafash, 49, from Brooklyn, came to his post after eleven years as research associated of Columbia University's department of chemical engineering. He blows about a hundred bubbles a day and thinks it isn't probable that kids will ever blow bubbles much bigger than at present because “the kid's face gets in the way”. (Photo by Harry Harris/AP Photo)
Edit Del
01 Jun 2018 00:01:00, post received 0 comments
Publication archive:
←   →
Popular tags:
All tags
Last searches: