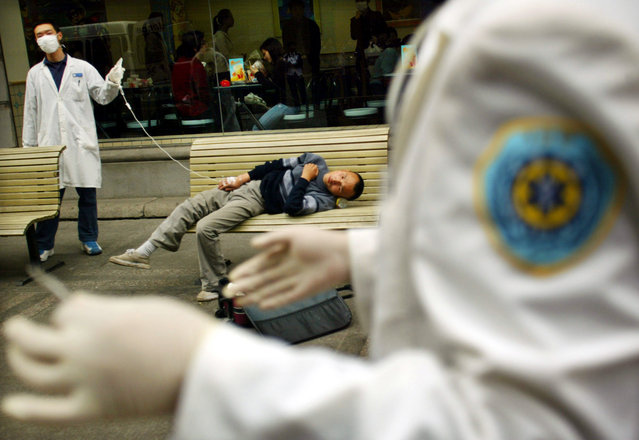 Chinese paramedics tend to a man suspected of suffering from Severe Acute Respiratory Syndrome (SARS) after he collapsed in public with its symptoms in Wuhan, the capital of Hubei province, April 29, 2003. China said on Tuesday nine more people had died from Severe Acute Respiratory Syndrome (SARS) and another 202 were infected, taking the death toll to 148 and the number of cases to more than 3,300. (Photo by Reuters/China Daily) 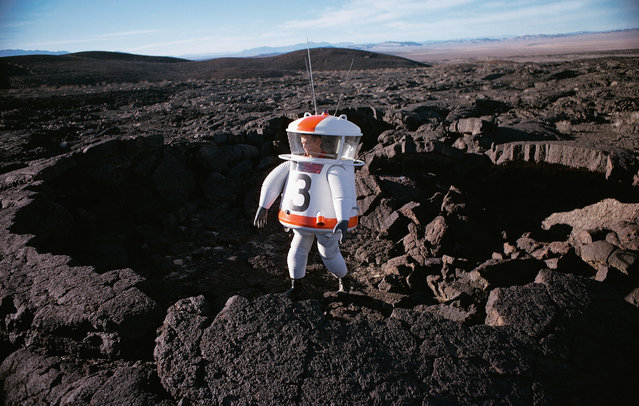 Inventor Allyn Hazard tests a prototype space suit, made by the Grumman Aircraft Engineering Corporation (later known as Grumman Aerospace Corporation, and then as Northrup Grumman), intended for use in NASA's Apollo moon landing program, Mojave Desert, California, early 1960s. By 1962 the achievement of the Mercury mission set America’s sights on a manned moon landing. The Mercury suit, while suitable for life in side the capsule, was inadequate for extravehicular activity. (Photo by Fritz Goro/The LIFE Picture Collection via Getty Images/Getty Images) 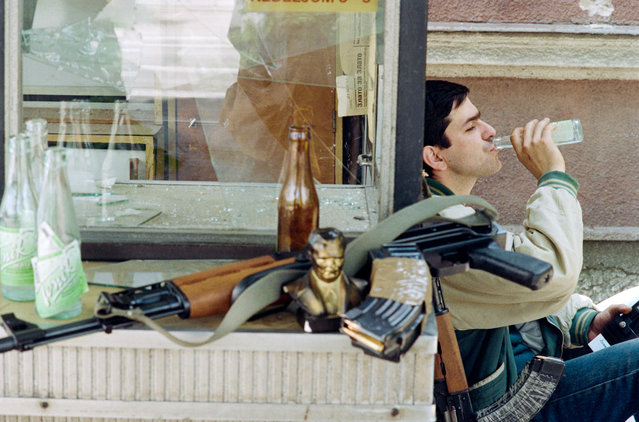 A Bosnian civilian fighter drinks soda and takes a rest as his submachine gun lays next to a statue of Marshal Tito following the evacuation of the Yugoslav federal troops from the Marshal Tito barraks, on June 05, 1992. The presence of Yugoslav soldiers at the barraks has been a sticking point in ending fighting in Sarajevo. (Photo by Georges Gobet/AFP Photo) 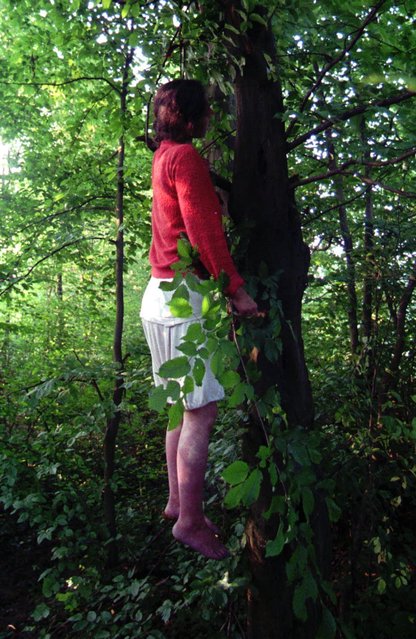 In this July 14, 1995 photo, refugee Ferida Osmanovic from Srebrenica is found hanged in a forest outside the U.N. base at Tuzla airport. The woman who looked to be in her early 20s. had hanged herself with a torn blanket. More than 10,000 refugees from the U.N. safe haven of Srebrenica, captured by the Bosian Serbs, arrived in Tuzla. Bosnia Serb commander Gen. Ratko Mladic announced that approximately 40,000 residents had been cleared from their homes in Srebrenica. Mladic, Europe's most wanted war crimes fugitive, has been arrested in Serbia, the country's president said Thursday, May 26, 2011. Mladic has been on the run since 1995 when he was indicted by the U.N. war crimes tribunal in The Hague, Netherlands, for genocide in the slaughter of some 8,000 Bosnian Muslims in Srebrenica and other crimes committed by his troops during Bosnia's 1992-95 war. (Photo by Darko Bandic/AP Photo) 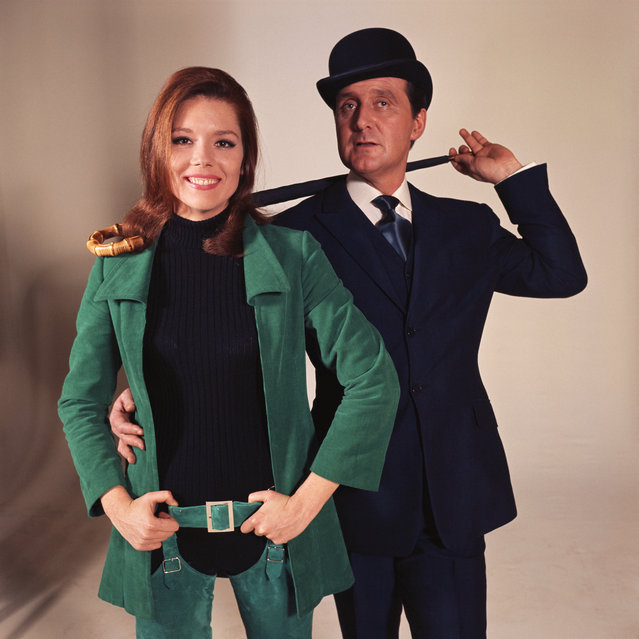 Diana Rigg and Patrick Macnee star as Emma Peel and John Steed in the television series “The Avengers”, circa 1966. (Photo by Terry O'Neill/Iconic Images/Getty Images) 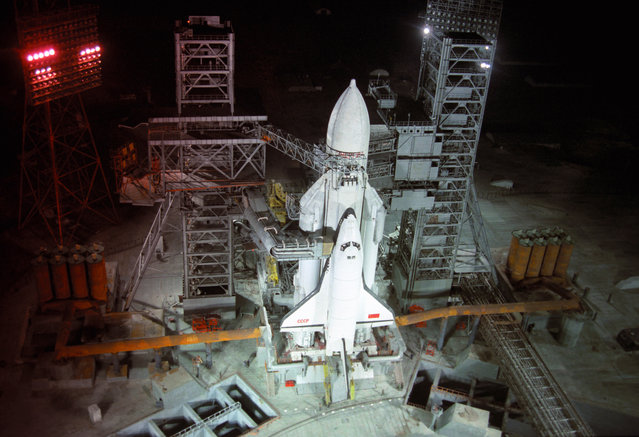 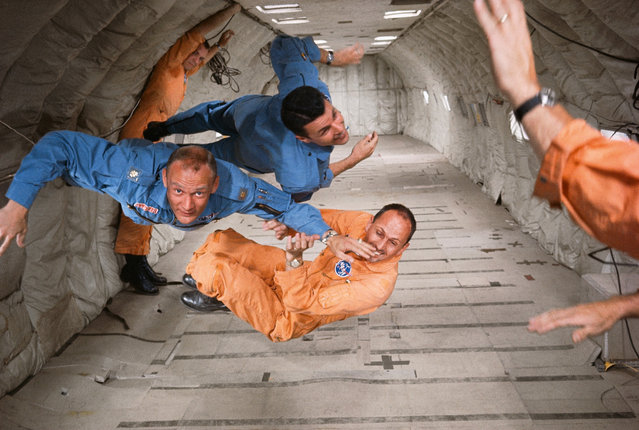 Astronauts Ted Freeman, Buzz Aldrin (centre), and Charlie Bassett experience zero gravity during a simulation flight in 1964. Nasa used a stripped down KC135 aircraft, affectionately known as the Vomit Comet, that was flown in a series of parabolas to give the astronauts about 30 seconds of either zero-G 1/6th-G near the top of each arc. (Photo by Ralph Morse/Time & Life Pictures/Getty Images/Taschen) 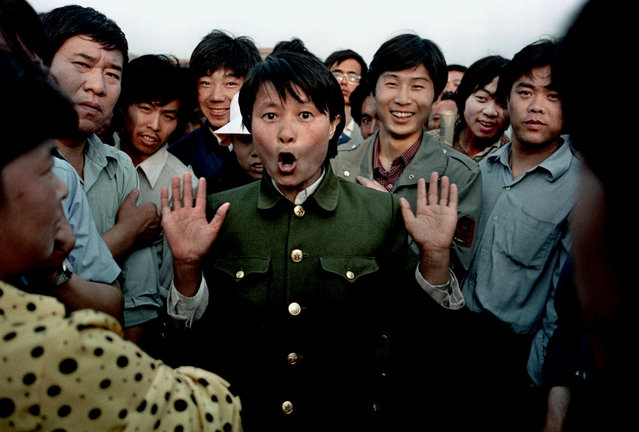 In this June 2, 1989 file photo, a woman soldier sings among pro-democracy protesters occupying Beijing's Tiananmen Square. Police and military would occasionally mix with protesters in an attempt to keep the demonstration peaceful. Over seven weeks in 1989, the student-led pro-democracy protests centered on Beijing’s Tiananmen Square became China’s greatest political upheaval since the end of the decade-long Cultural Revolution more than a decade earlier. (Photo by Jeff Widener/AP Photo/File) 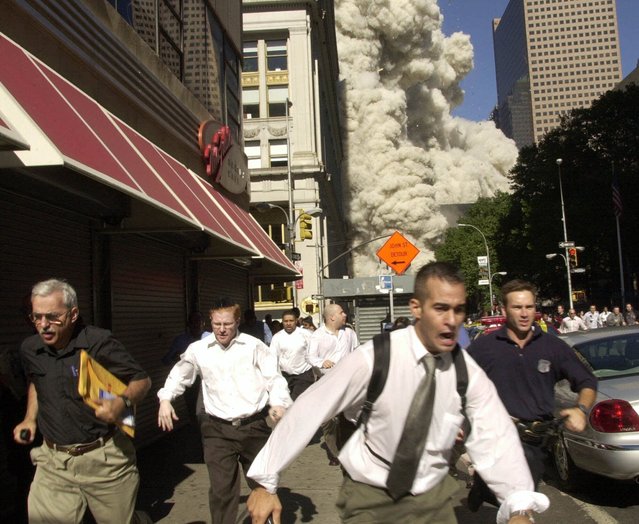 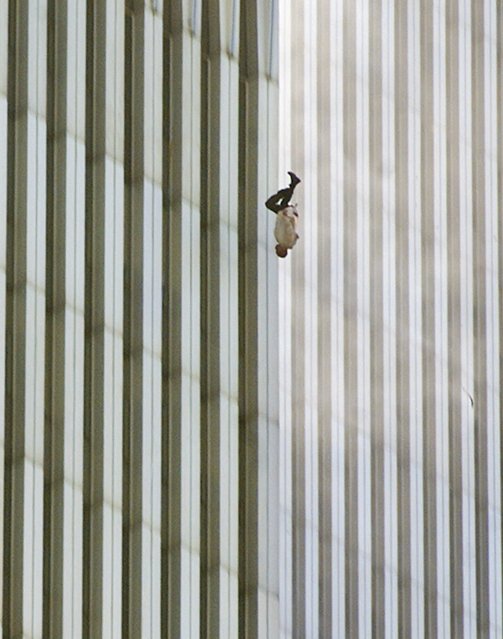 In this Tuesday, September 11, 2001 file picture, a person falls headfirst from the north tower of New York's World Trade Center. This iconic image is included in Time magazine's most influential images of all time, released Thursday, Nov. 17, 2016, through a new book, videos and a website, Time.com/100photos. (Photo by Richard Drew/AP Photo) 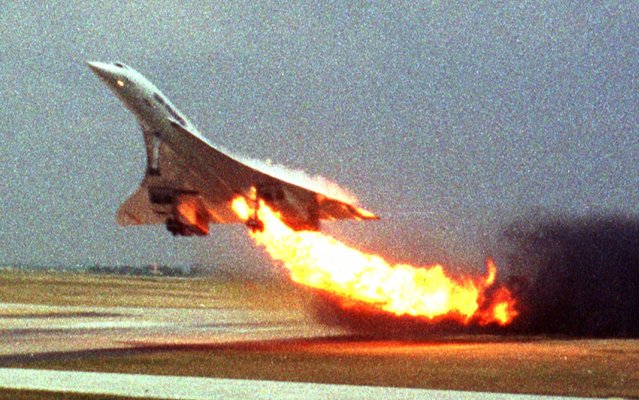 Air France Concorde flight 4590 takes off with fire trailing from its engine on the left wing from Charles de Gaulle airport in Paris on July 25, 2000. The plane crashed shortly after take-off, killing all the 109 people aboard and four others on the ground. The first word that something had gone terribly wrong with the Concorde came from the control tower which told the crew that they were trailing flames, according to a preliminary report made public Thursday, August 31, 2000 by French investigators probing the crash. A Japanese businessman took this photo from inside another plane while he was on a business trip and offered it to a Japanese newspaper after returning home early August. (Photo by Toshihiko Sato/AP Photo) 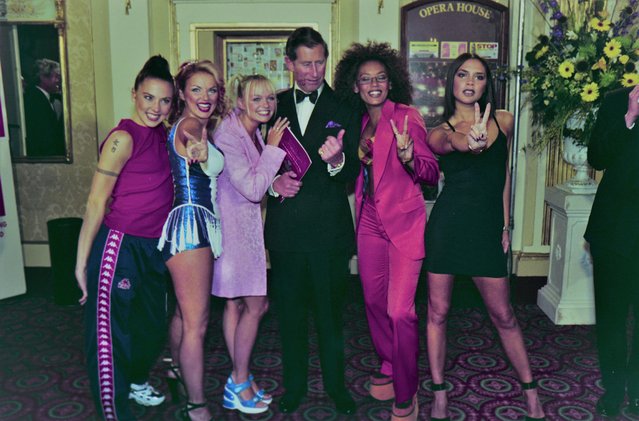 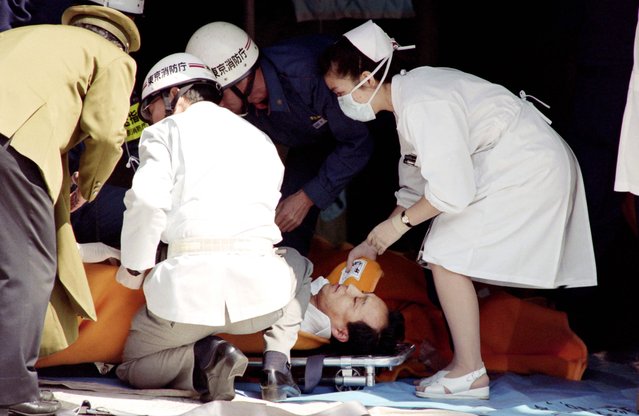 This file photo taken on March 20, 1995 shows a commuter being treated by an emergency medical team at a make- shift shelter before being transported to hospital after being exposed to sarin gas fumes in the Tokyo subway system during an Aum sect attack Shoko Asahara, the leader of the Aum Shinrikyo cult that carried out a deadly sarin attack on Tokyo' s subway in 1995, was executed on Friday, local media reported. (Photo by Junji Kurokawa/AFP Photo) 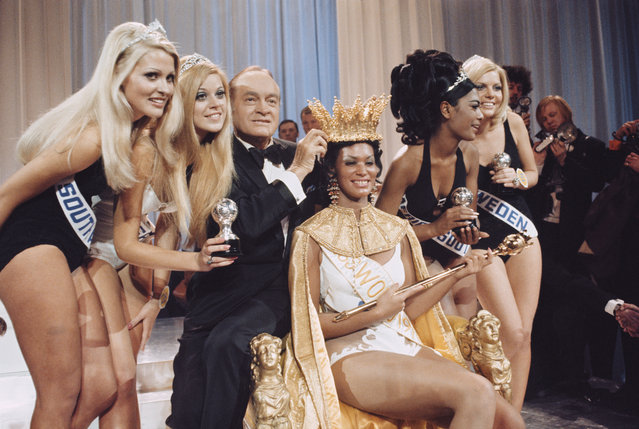 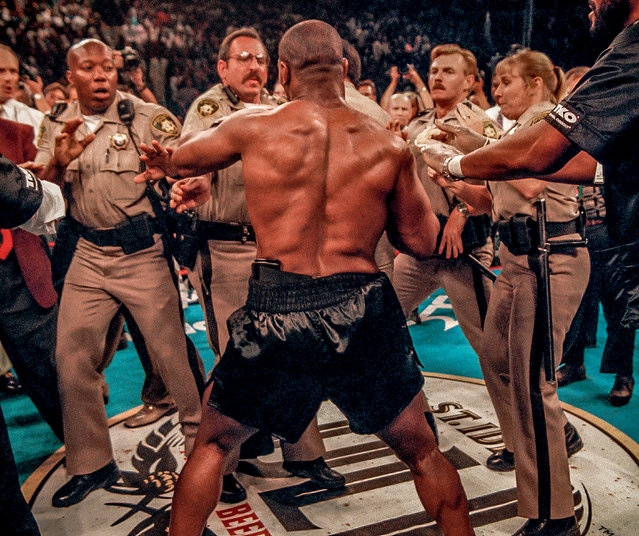 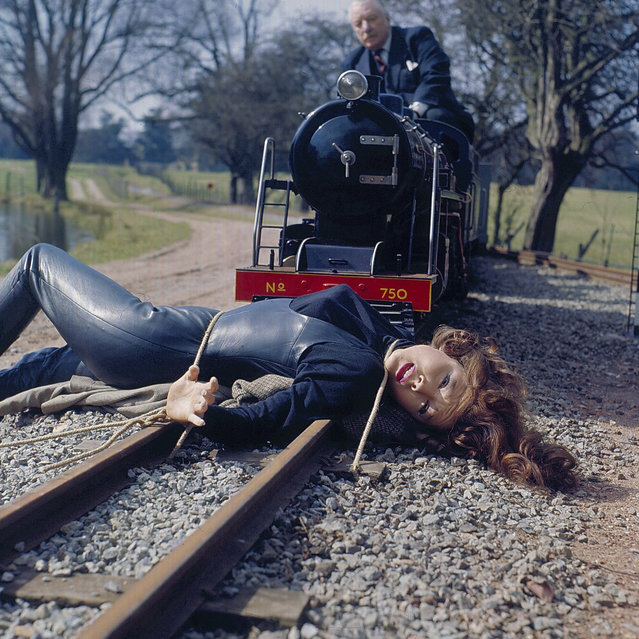 English actress Diana Rigg as “Emma Peel” is tied to a railway track as a miniature train advances on her in a scene from the television series “The Avengers” in 1968. Rigg died at her home in London on 10 September 2020, at the age of 82. (Photo by Popperfoto via Getty Images/Getty Images)
Edit Del
12 Sep 2020 00:03:00, post received 0 comments
Publication archive:
←   →
Popular tags:
All tags
Last searches: