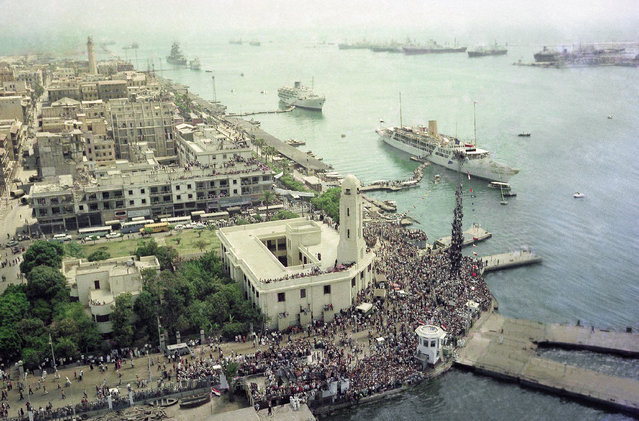 In this June 5, 1975 file photo, thousands throng the docks and quays of Port Said at the northern end of the Suez Canal in Port Said, Egypt, as the first passenger ships let off steam and pontoon ramps are kicked away as they get ready for first passage through the canal in years. Since it opened in 1869, the canal has been a source of national pride and a focus of international conflict. Now, a skyscraper-sized container ship called the Ever Given got stuck sideways across the waterway since Tuesday, March 23, 2021 . The obstruction has halted canal traffic, valued at over $9 billion a day. (Photo by Horst Faas/AP Photo/File) 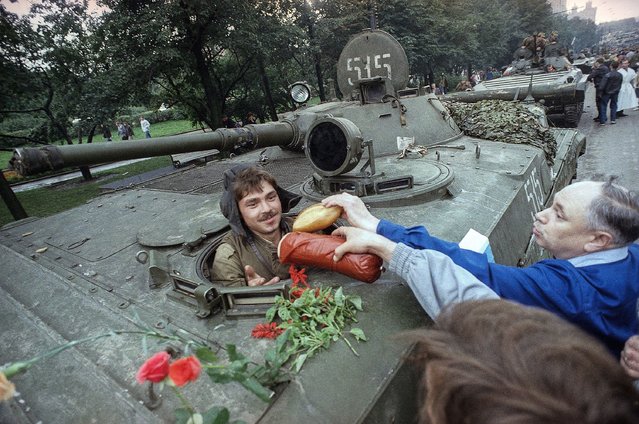 In this Wednesday, August 21, 1991 file photo, appreciative muscovites hand bread, sausages and flowers to a Soviet tank's driver who helped stop the failed hardline coup in Moscow, Russia. When a group of top Communist officials ousted Soviet leader Mikhail Gorbachev 30 years ago and flooded Moscow with tanks, the world held its breath, fearing a rollback on liberal reforms and a return to the Cold War confrontation. But the August 1991 coup collapsed in just three days, precipitating the breakup of the Soviet Union that plotters said they were trying to prevent. (Photo by Czarek Sokolowski/AP Photo/File) 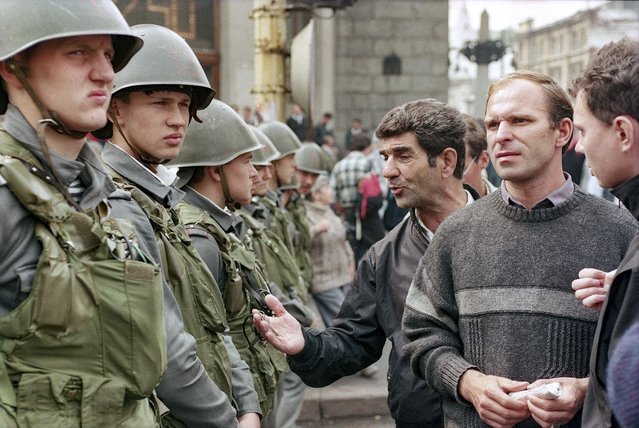 In this Tuesday, August 20, 1991 file photo, Muscovites debate with soldiers who guard the Manezh Square at Gorky Street in downtown Moscow during the coup attempt by hard-line Communists against the Soviet president, Russia. (Photo by Boris Yurchenko/AP Photo/File) 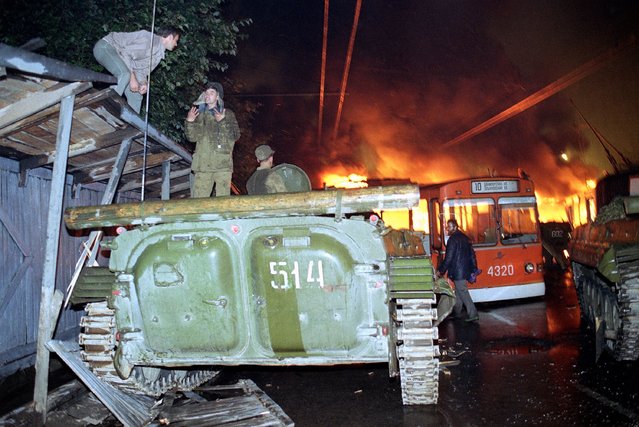 In this Wednesday morning, August 21, 1991 file photo, a trolley bus that was used by anti-coup demonstrators to block the exit of Soviet armored personnel carriers from the area near the Soviet Foreign Ministry office burns during a verbal confrontation between demonstrators and Soviet soldiers standing atop an armored vehicle in downtown Moscow, Russia. (Photo by Alexander Zemlianichenko/AP Photo/File) In this Monday, August 19, 1991 file photo, a crowd gathers around a personnel carrier as some people climb aboard the vehicle and try to block its advance near Red Square in downtown Moscow, Russia. (Photo by Boris Yurchenko/AP Photo/File) 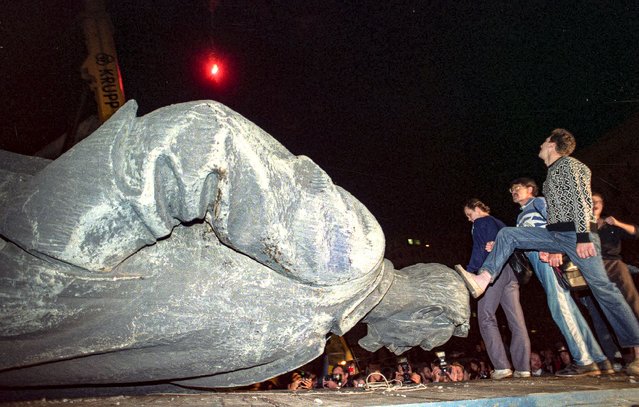 In this Friday, August 23, 1991 file photo, people kick the head of the statue of Felix Dzerzhinsky, the founder of the Soviet secret police, in front of the KGB main headquarters on the Lubyanka Square. (Photo by Alexander Zemlianichenko/AP Photo/File) 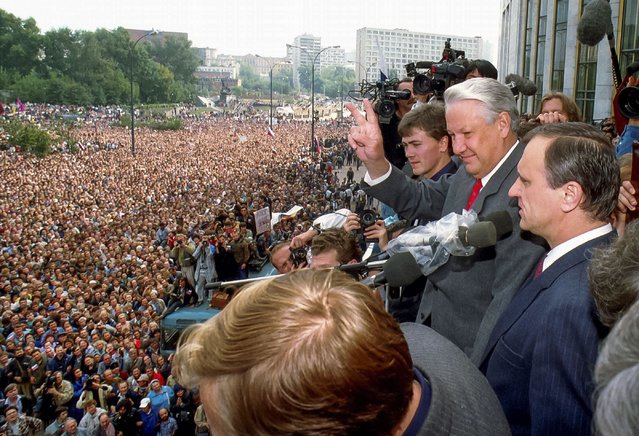 In this Thursday, August 22, 1991 file photo, Russian Republic President Boris Yeltsin, second right, makes a V-sign to thousands of Muscovites, as his top associate Gennady Burbulis stands near, during a rally in front of the Russian federation building to celebrate the failed military coup in Moscow, Russia. (Photo by Alexander Zemlianichenko/AP Photo/file) 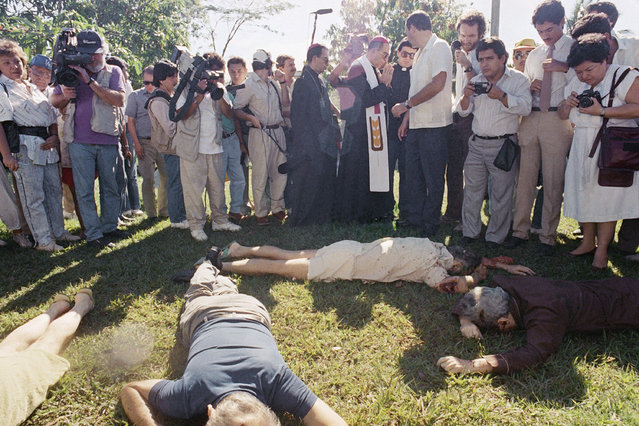 In this November 16, 1989, file photo, the Archbishop of San Salvador, Mons. Arturo Rivera y Damas and journalists view the bodies of six Jesuit priests murdered in San Salvador. The sentencing of former Salvadoran colonel Inocente Orlando Montano to 133 years in prison by a Spanish court on Friday, Sept. 11, 2020, in relation to the 1989 massacre by an elite comando unit is raising calls once again for El Salvador to investigate and prosecute the masterminds of the massacre. (Photo by John Hopper/AP Photo/File) 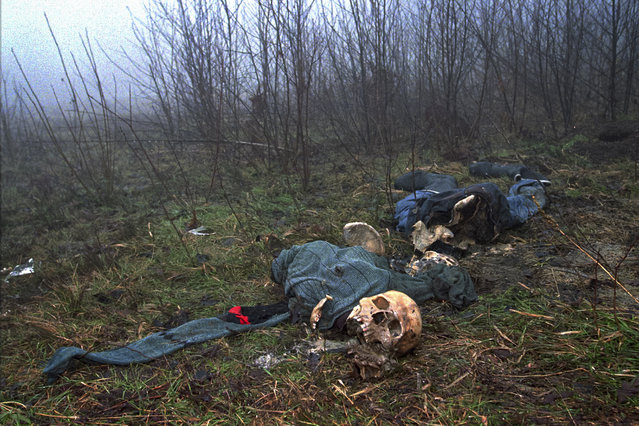 In this February 4, 1996, file photo one of four clothed skeletons being examined by U.N. investigator Elizabeth Rehn as she tries identify an estimated 8,000 Muslim men missing after the Serb conquest of the former Muslim enclave of Srebrenica in July 1995, lies on a hilltop. Twenty-six years after the July 1995 Srebrenica massacre, the only episode of Bosnia’s 1992-95 war to be legally defined as genocide, its survivors continue to grapple with the horrors they endured while also confronting increasingly aggressive downplaying and even denial of their ordeal. (Photo by Alexander Zemlianichenko/AP Photo/File) 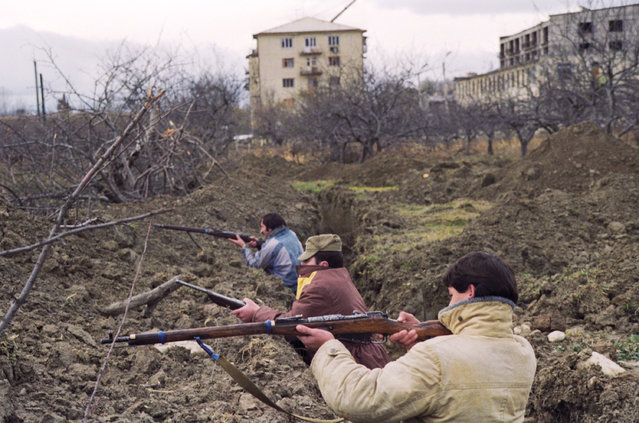 Ossetians in trenches on the outskirts of Tskhinvali, 1991. The men are using antiquated Russian Mosin-Nagant rifles first produced in the 1890s. Throughout 1991 the patchwork of Georgian and Ossetian villages that made up South Ossetia was riven with interethnic murders and intimidation. (Photo by Gennady Khamelyanin/ITAR-TASS) 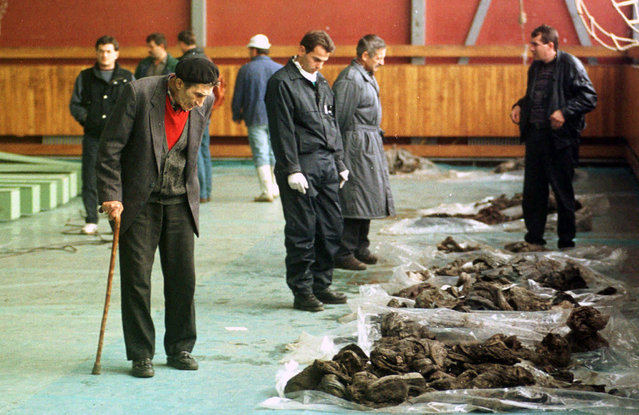 In this October 9, 1996. file photo, Bosnian Muslims trying to recognize their relatives killed by Bosnian Serbs in 1992, inside a sport hall in Kljuc, 160 kms (100mls) north-west of Sarajevo, Bosnia. While it brought an end to the fighting, the Dayton peace agreement baked in the ethnic divisions, establishing a complicated and fragmented state structure with two semi-autonomous entities, Serb-run Republika Srpska and a Federation shared by Bosniak and Croats, linked by weak joint institutions. (Photo by Darko Bandic/AP Photo/File) 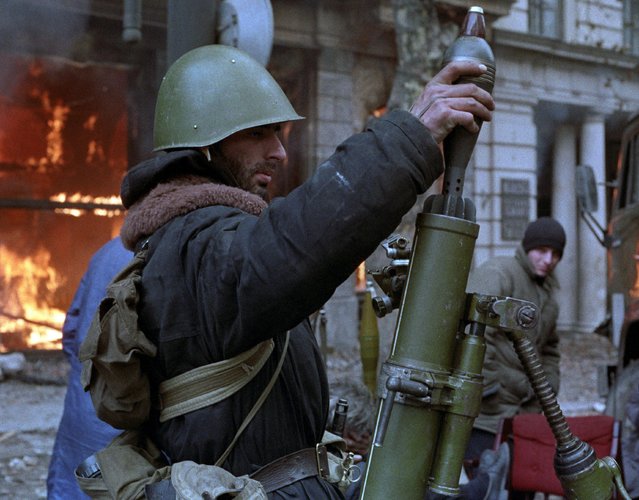 An opposition supporter loads the mortar at the burning building during the fights against President Zviad Gamsakhurdia in Tbilisi, Georgia, 29 December 1991. A major battle appears to be looming as both sides are bringing in tanks and artillery pieces. (Photo by Oleg Nikishin/EPA) 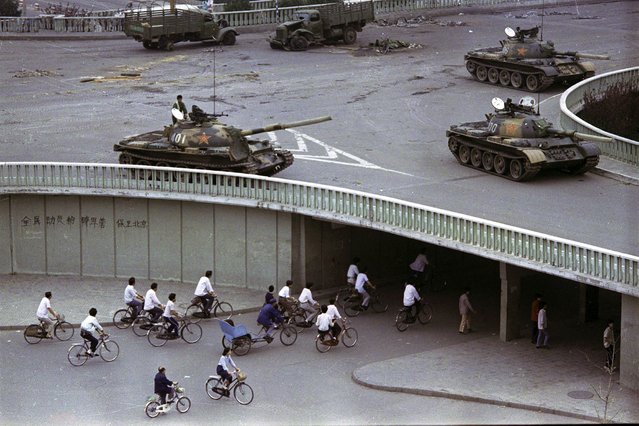 In this June 6, 1989, file photo, bicycling commuters, sparse in numbers, pass through a tunnel as above on the overpass military tanks are positioned in Beijing, two days after the Tiananmen Square massacre. Hong Kong’s second ban on an annual vigil for victims of the bloody June 4, 1989 crackdown on Beijing’s Tiananmen Square protest movement and the closure of a museum dedicated to the event may be a further sign that the ruling Communist Party is extending its efforts to erase the event from the collective consciousness of Chinese people. The slogan on the wall at left reads: “Strike down martial law”. (Photo by Vincent Yu/AP Photo/File) 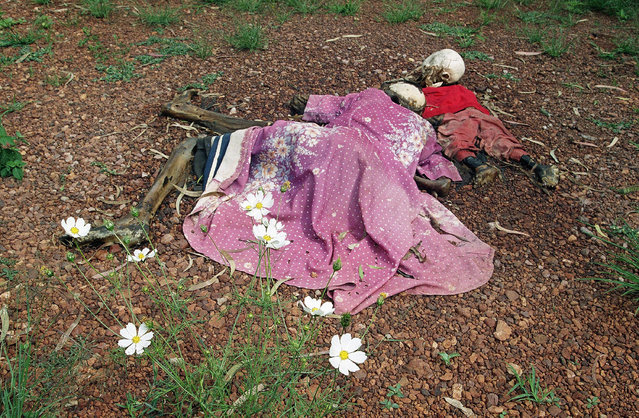 In this May 31, 1994, file photo, the bodies of a woman and her child lie by a church in Nyarubuye parish, which was the site of an April 14 massacre that survivors say was perpetrated by a militia assisted by government gendarmes, about 95 miles east of the capital Kigali, in Rwanda. A commission that spent nearly two years uncovering France's role in 1994's Rwandan genocide concluded Friday, March 26, 2021 that the country reacted too slowly in appreciating the extent of the horror that left over 800,000 dead and bears “heavy and overwhelming responsibilities” in the drift that led to the killings, but cleared the country of any complicity in the slaughter that mainly targeted Rwanda's Tutsi ethnic minority. (Photo by Jean-Marc Bouju/AP Photo/File) 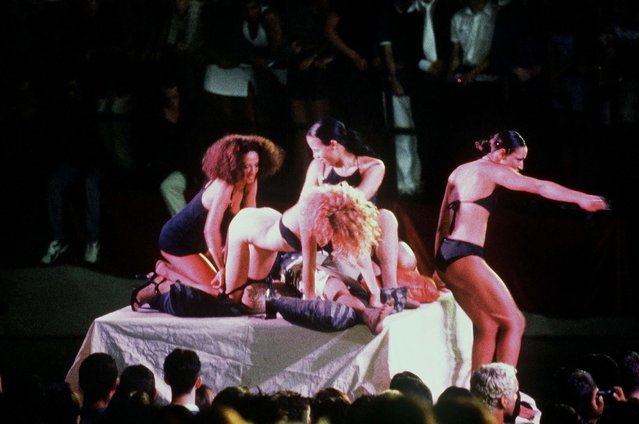