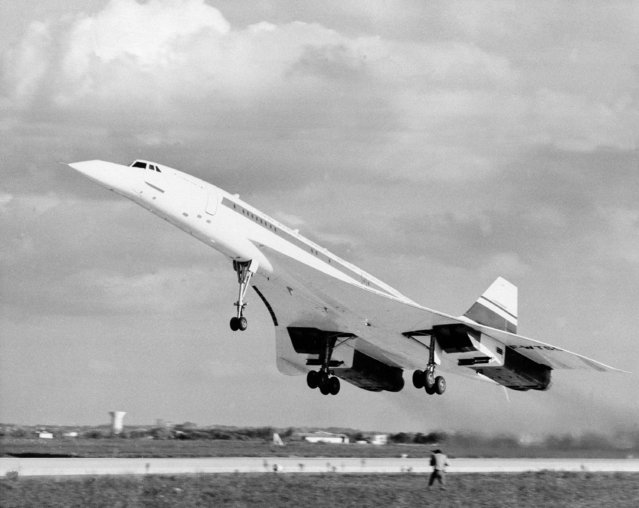 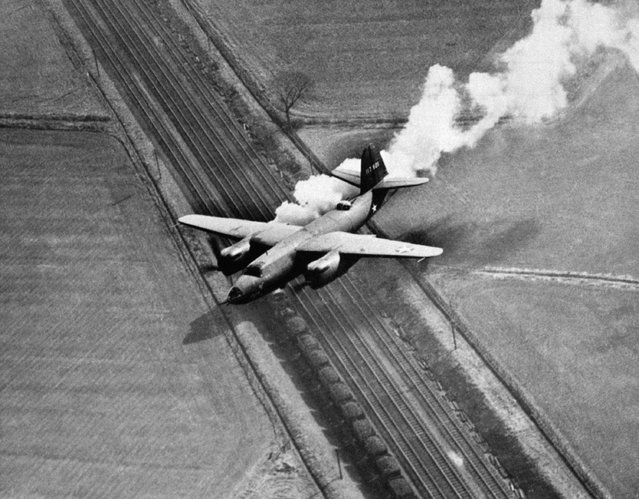 This Marauder medium bomber is not in distress. The white smoke is coming from a locomotive on the tracks below and not from the right engine of the plane. Flying over the English countryside while returning from a raid over Europe, February 17, 1944. (Photo by AP Photo) 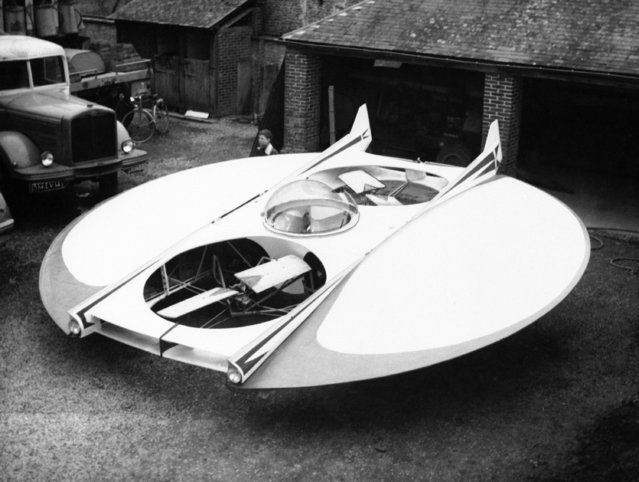 This aircraft, which was flown for the first time last month in France, is the flying saucer dream of Jean Grimaldi, a Normandy merry-go-round owner. It is equipped with two 28-horsepower motors which propel two horizontal and two vertical propellers, shown February 17, 1962. The craft can take off like a plane or like a helicopter and has a forward speed of nearly 200 miles an hour. (Photo by AP Photo) 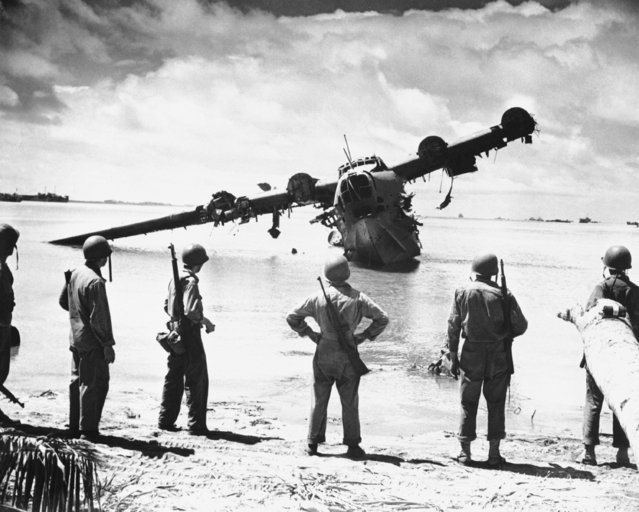 U.S. Army troops stand on shore at Makin Island in the South Pacific, Kiribati, December 20, 1943 to inspect a big Japanese flying boat which was riddled by American planes while it rode at anchor during invasion of Japanese-held base. Although the ship could not be flown, Japanese used it as a machine gun nest until they were annihilated. (Photo by AP Photo) 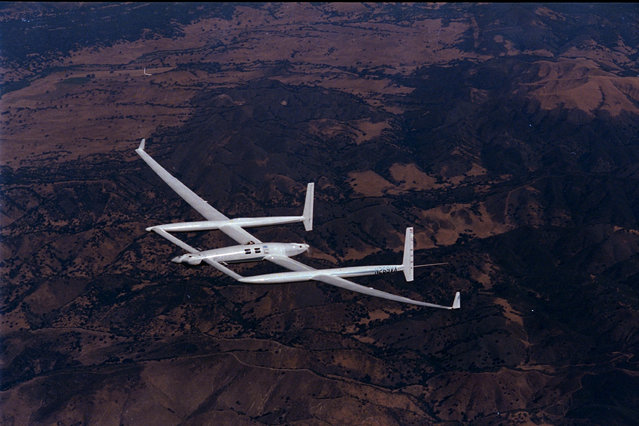 This is a December 5, 1986 photo of the twin-engine, pusher-puller experimental aircraft named Voyager during a training flight before her historic first non-stop, un-refueled flight around the world. The plane took off from Edwards Air Force Base, Calif., Dec. 14, 1986 with 1,200 gallons of fuel onboard and returned to the desert base nine days later on Dec. 23 with 18 gallons to spare. (Photo by Douglas C. Pizac/AP Photo) 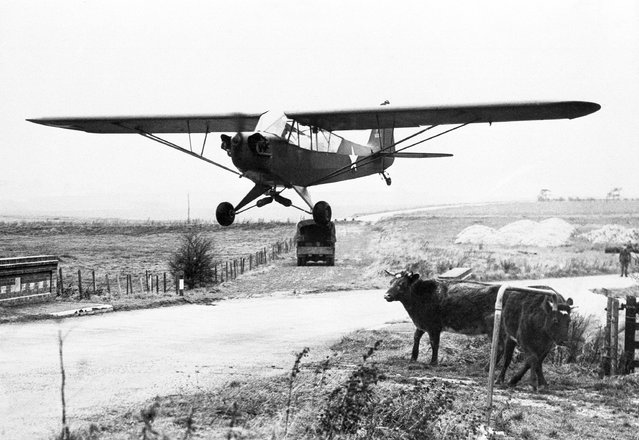 The cheapest military plane in the world has now arrived in this country to be used as an observation post replacing balloons of the last war; and called the Flying Jeep by Americans. The two-seater aircraft has a 65 H.P. engine and can land and take off on ordinary roads. This handy little machine answers to the name of Piper Cub and costs about $550 to build. This is a Flying Jeep dropping gently to earth in the space of about 40 yards, landing so quietly that the roadside cattle are quite unconcerned in England, December 27, 1942. (Photo by AP Photo) 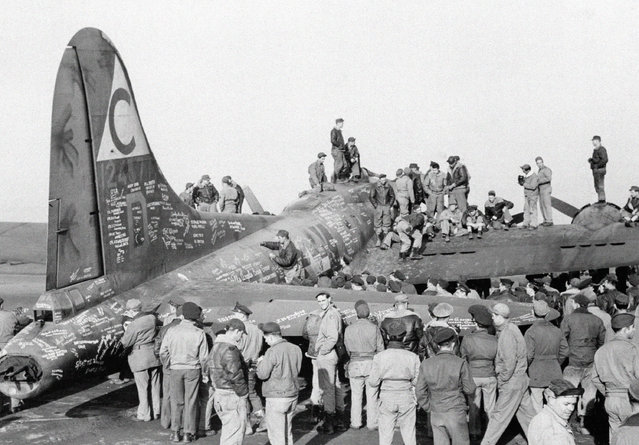 It is usually the famous who do the autographing, but GI's swarm all over Hells Angels at a U.S. airdrome in England on February 3, 1944, to put their names on the Flying Fortress before its take-off for the United States and a tour of aircraft assembly and other war plants. Hells Angels, one of the most famous Fortresses in the U.S. Army 8th Air Force, has made 49 raids, dropping more than a quarter of a million pounds of bombs on enemy territory and fighting through many battles with Nazi planes. (Photo by AP Photo) 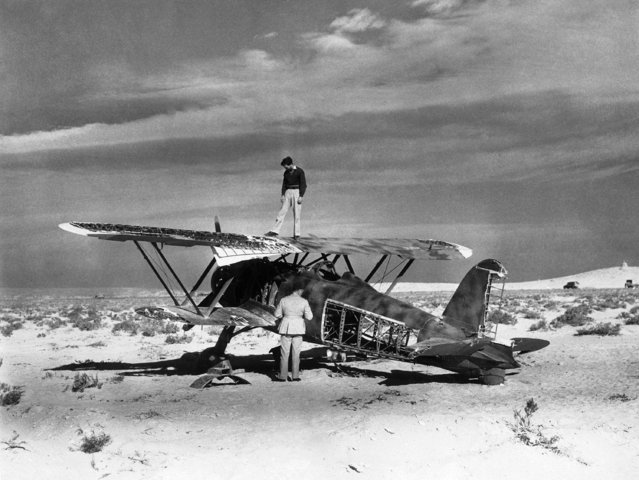 Brought down by planes of the Royal Air Force, Italian this C.R. 42 managed to force-land in the desert near Sollum, Libya, on February 7, 1942. (Photo by AP Photo) 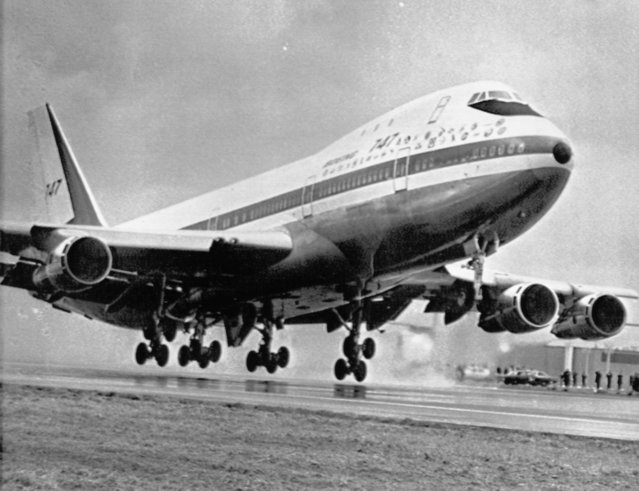 A Boeing 747 jumbo jet plane taking off for its first flight at the Boeing plant in Everett, Washi., USA on February 9, 1969. The 747 is the world's largest commerical aircraft. (Photo by AP Photo) 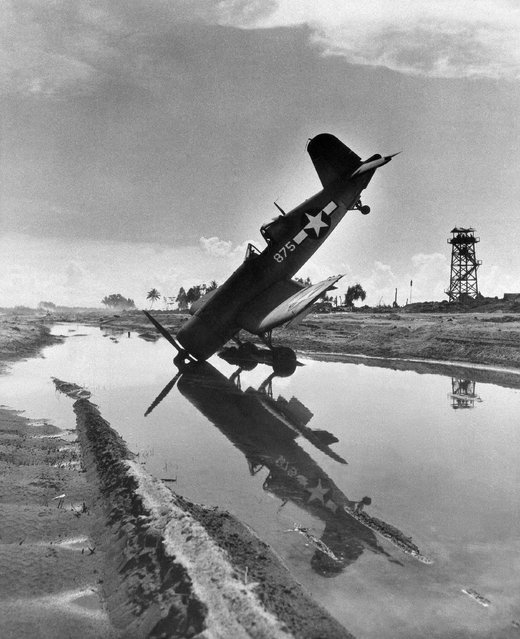 It wasn't curiosity but a skid off the runway at Torokina field, Bougainville Island on February 10, 1944. The accident happened after an attempted take-off. The pilot escaped uninjured, a new propeller was installed, and both flier and plane were ready to take on more Japanese. (Photo by AP Photo) 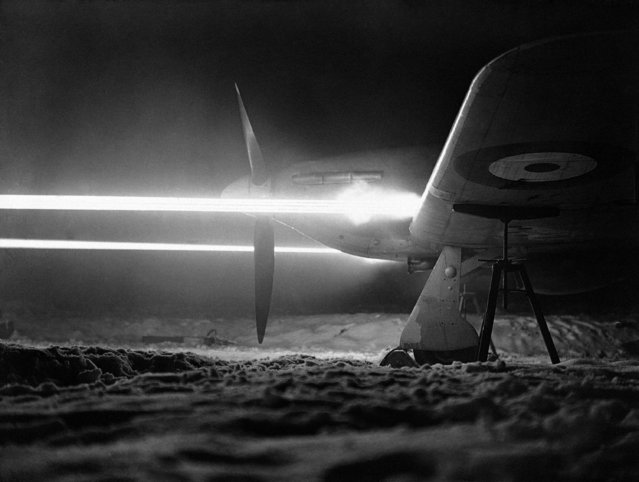 Remarkable picture of the guns of a Hurricane aircraft of Fighter Command Royal Air Force firing a burst of 1600 rounds at night. To secure the luminous effect a proportion of one tracer bullet in four rounds was introduced. The effect recorded by a camera placed on the ground on the port side of the Hurricane, at an airfield in England, on February 15, 1942. (Photo by AP Photo) 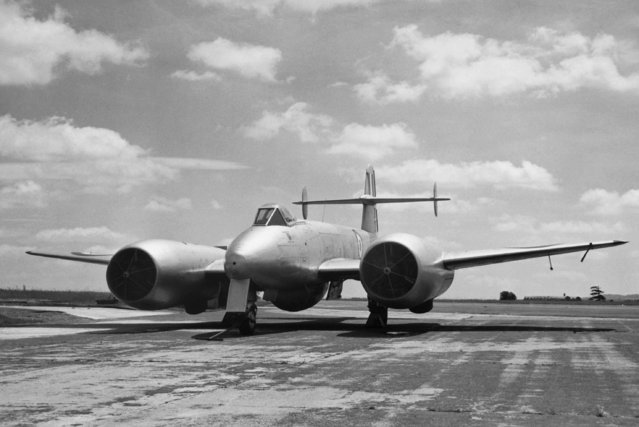 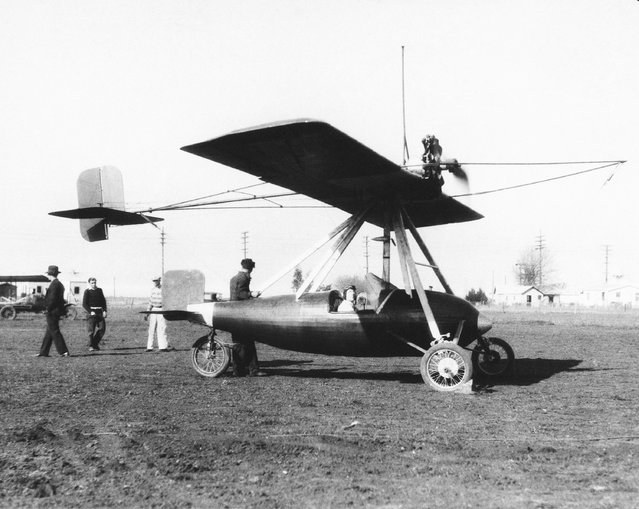 A monoplane of novel design declared by its inventor, R.V. Norris, of San Francisco, Calif., to be "foolproof," which is undergoing tests at the Redwood City, Calif. airport, February 16, 1930. The radial motor is attached to the wing, from which is suspend the fuselage which remains on an even keel during flight. The wing may be tilted in any direction at the will of the pilot, by means of control wires from his seat in the cockpit. (Photo by AP Photo) 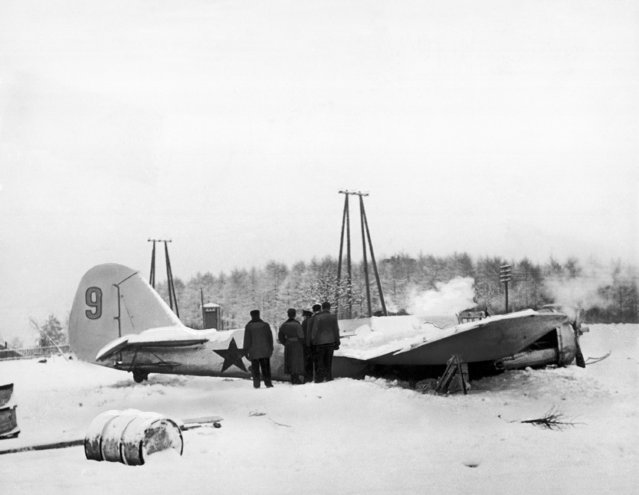 Soviet bomber, shot down by Finnish anti-aircraft guns on the Karelian front, where Russia was reporting on January 3, 1940 massing seven divisions for a drive on the Mannerheim Line. (Photo by AP Photo) 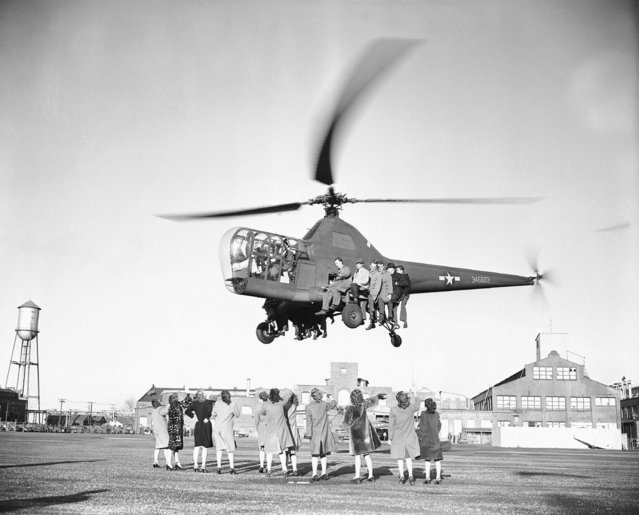 An Army Sikorsky R-5 helicopter, undergoing record trials, demonstrates its lifting power by carrying 17 persons and pilot aloft as female onlookers wave in Bridgeport, Conn., January 10, 1946. During the tests records were claimed for altitude speed and both altitude and speed with payload. (Photo by Anthony Camerano/AP Photo) 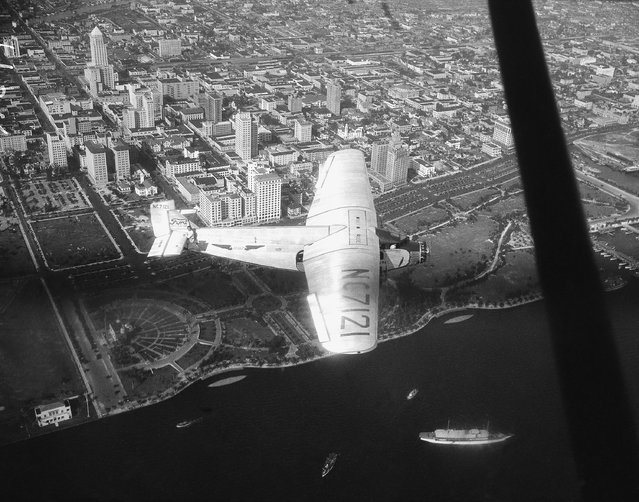 Jimmy Terry, stunt flier, repairs a control cable of a three-motored airplane at an altitude of 1,500 feet over Biscayne Bay, Fla. on January 24, 1930 to show that such repairs may be made during a flight without endangering the life of the mechanic. Terry dangled in the air as he made a hand-over-hand journey from the plane's cabin door to a point near the tail strut on a rope tied to the fuselage. He wore a safely belt in accordance with Department of Commerce regulations. (Photo by AP Photo) 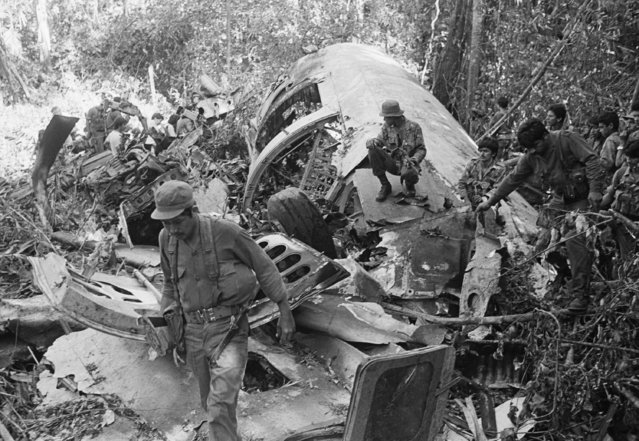 Sandinista soldiers walk amid the debris after shooting down a supply plane of the U.S. backed rebels in Loma El Arenal, Nicaragua, a Defense Ministry source said Sunday, January 24, 1988. Rebel spokeswomen said the craft was a DC -6 and 11 crew members were killed. (Photo by Mario Tapia/AP Photo) 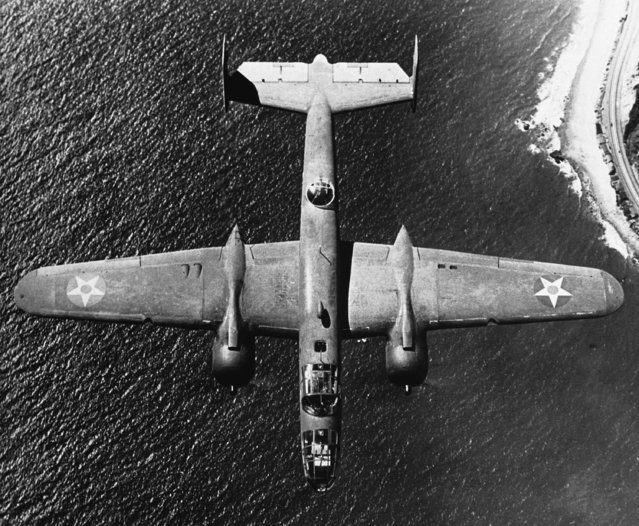 American Mitchell B-25 daylight medium bomber, now operating from Britain, in flight somewhere over the coast of Britain on January 25, 1943. (Photo by AP Photo) 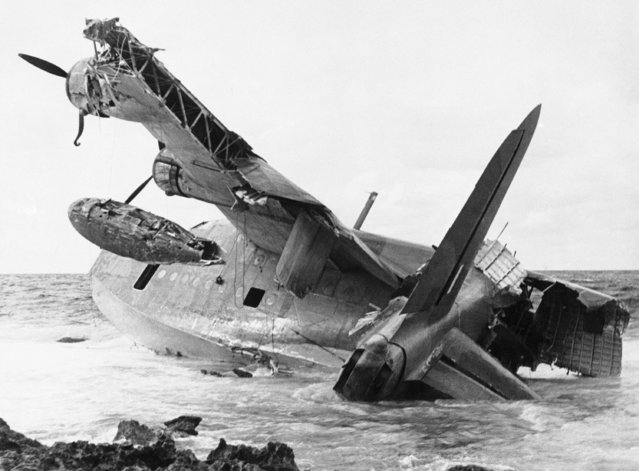 The huge Sunderland flying boat soon began to break up and was left to the mercy of the sea, somewhere near apollonian in Cyrenaica, Libya, January 31, 1942. As the men shivered while drying their clothes, 20 Italian soldiers appeared. (Photo by AP Photo) 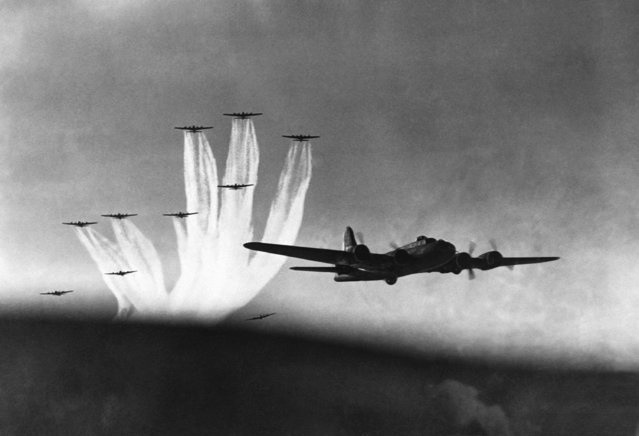 Flying fortresses, flying at high altitude in a practice bombing raid over England leave vapor trails in the sky, on January 4, 1943. (Photo by AP Photo) 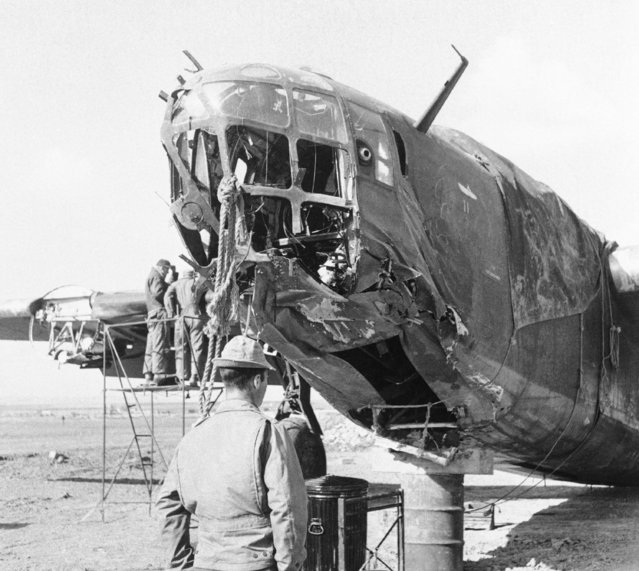 U.S. Army bomber made her way back to her advanced base in Tunisia, January 4, 1943 in spite of severe damaged absorbed during a raid on the Tunisian front in support of ground troops advancing against Rommel's forces. The service unit rushes repairs to get the plane in action against the axis in a day of two. (Photo by AP Photo)
Edit Del
19 Feb 2018 00:02:00, post received 0 comments
Publication archive:
←   →
Popular tags:
All tags
Last searches: