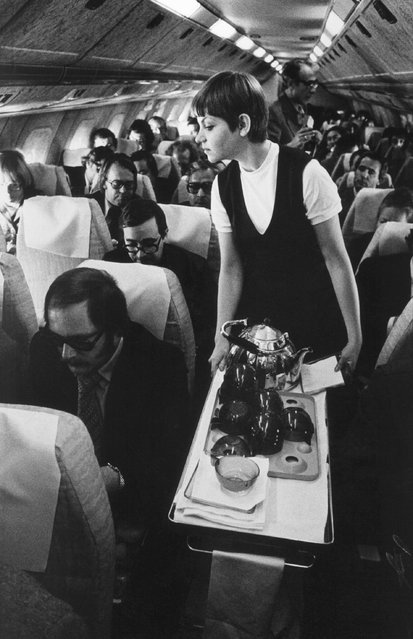 An air hostess serves passengers on board a TU-144. Passengers were first welcomed on board around 1977. (Photo by Miroslav Zajic/Corbis via Getty Images) 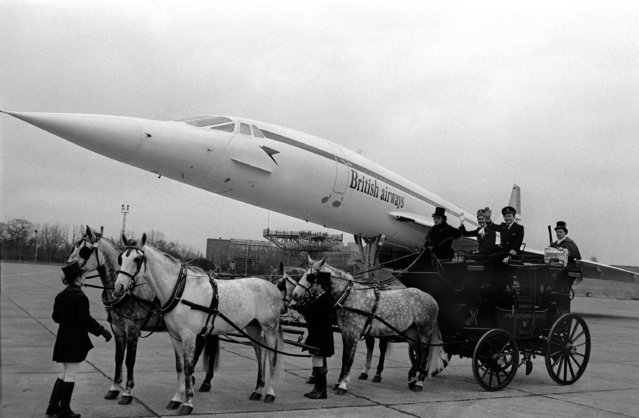 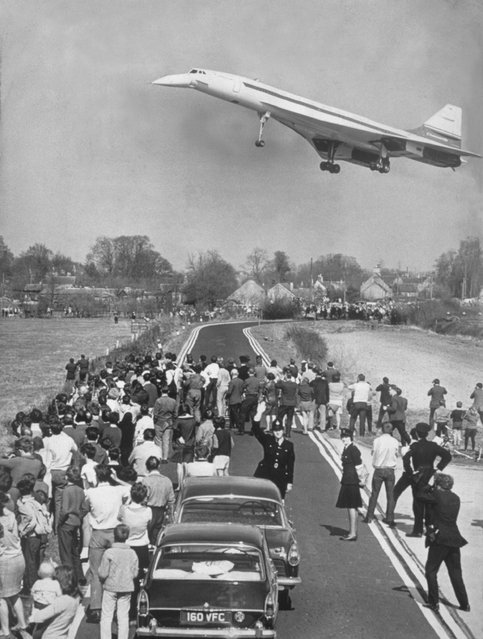 Concorde's maiden flight, Fairford, Gloucestershire, 10 April 1969. “Britain's Concorde 002 made a 21 minute flight into the seventies yesterday and gave Britain and France a possible seven year lead over any possible American rival. It was champagne in Bristol last night after a great day for Britain and her planemakers. Technology Minister Anthony Wedgewood Benn summed it up: I have never felt so proud to be British and I think my feelings are shared by everyone who watched and waited for this day”. (Photo by SSPL/Getty Images) 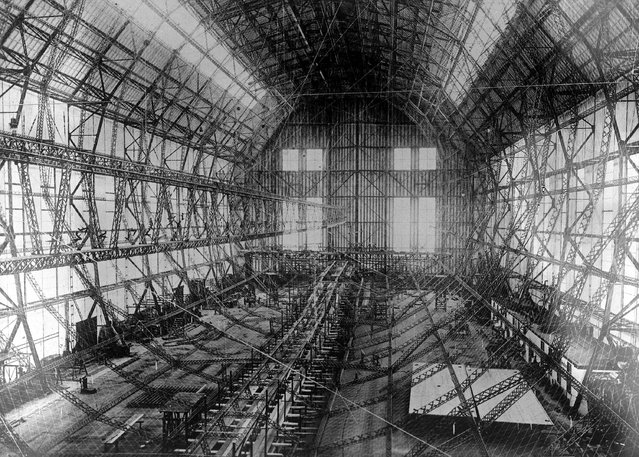 The construction of the largest airship, Z. 127 which was later named Graf Zeppelin, ever built is underway in the giant hanger at Friedrichshafen, Germany, November 23, 1927. (Photo by AP Photo) 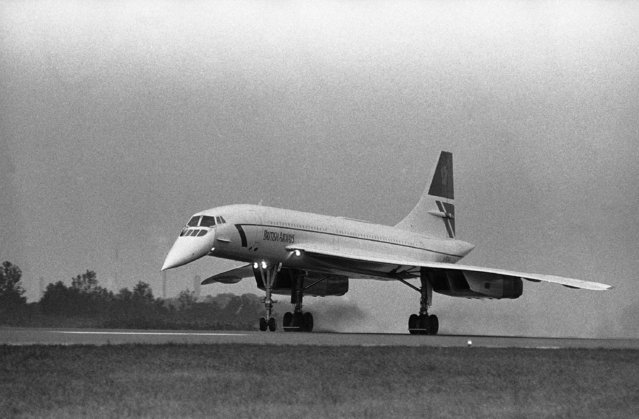 A British Airways Concorde lands at Philadelphia International Airport, October 3, 1985 the first scheduled visit in the city for the plane, which can travel at twice the speed of sound. The arrival was part of a charter arrangement with Cunard Line Ltd., in which passengers fly from Philadelphia to London and return to the U.S. aboard the Queen Elizabeth 2 passenger liner. (Photo by George Widman/AP Photo) 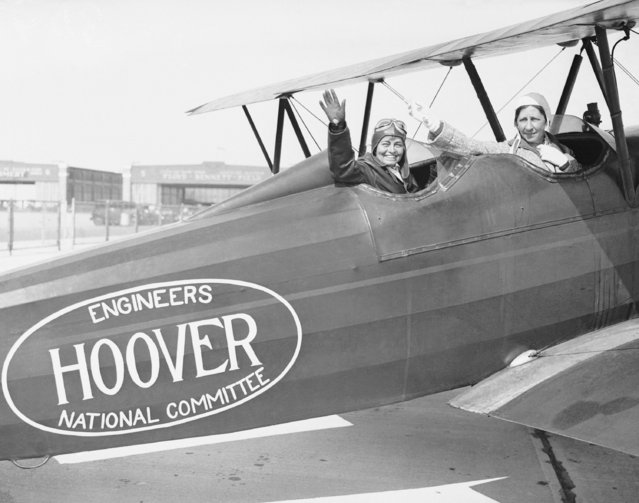 Two grandmothers campaign for the re-election of President Herbert Hoover by taking off from Floyd Bennett Field in the Brooklyn borough of New York, October 3, 1932. The grandmothers, whose first names are not available, are Mrs. H. Foster Bain, pilot, and Mrs. Samuel Dolbear, both of New York. (Photo by AP Photo) 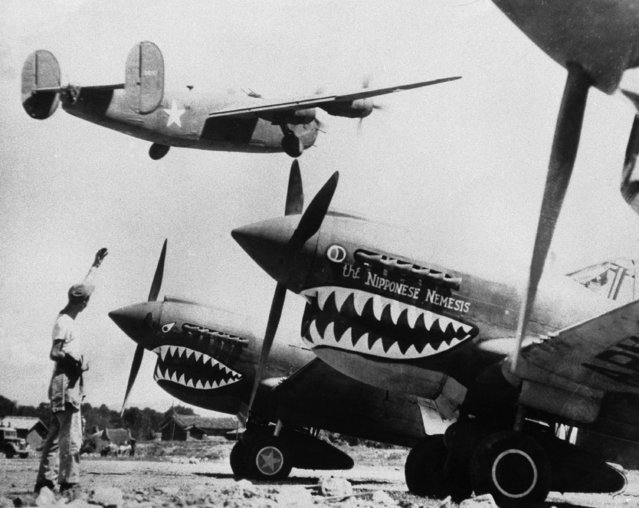 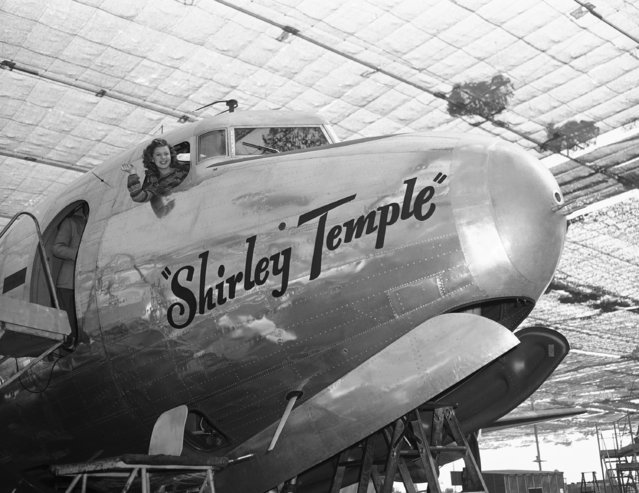 Shirley Temple tries out the big four-engine Army transport C-54 which she had just christened with a pat and a kiss, at the Douglas plant, October 12, 1944 in Santa Monica. This is the size plane used to transport wounded men across the Pacific and to take President Roosevelt, Prime Minister Churchill and others across the Atlantic. Shirley's next movie will be “I'll Be Seeing You”. (Photo by AP Photo) 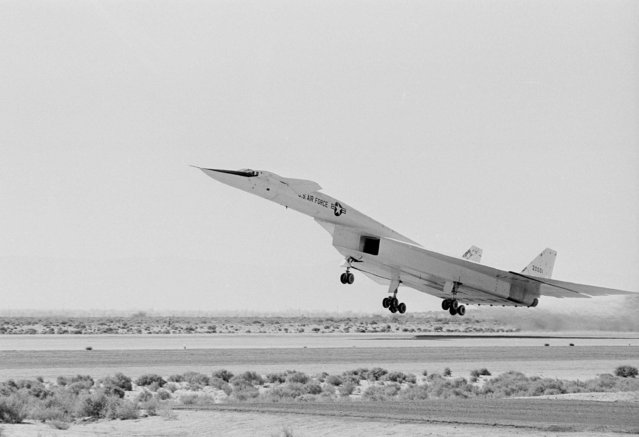 The XB70A takes off from Edwards Air Force Base for a flight to an altitude of 35,000 feet and a speed of 740 miles an hour, October 12, 1964. It was the third flight for the problem-plagued plane. (Photo by Ellis Bosworth/AP Photo) 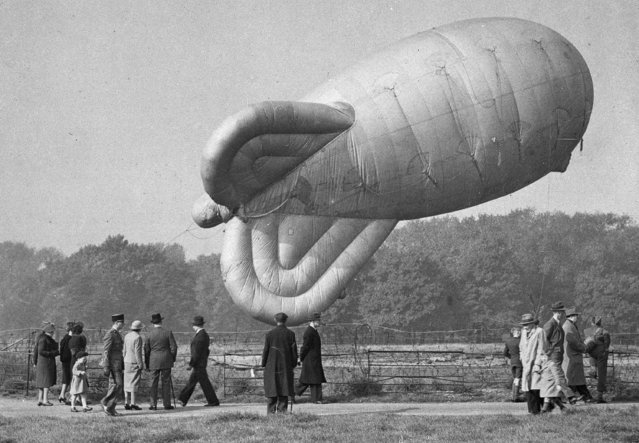 A barrage balloon in Hyde Park, London, is hauled down for inspection and to be refilled with gas, October 20, 1941. The man in uniform at left is Free French Army General Charles de Gaulle. (Photo by AP Photo) 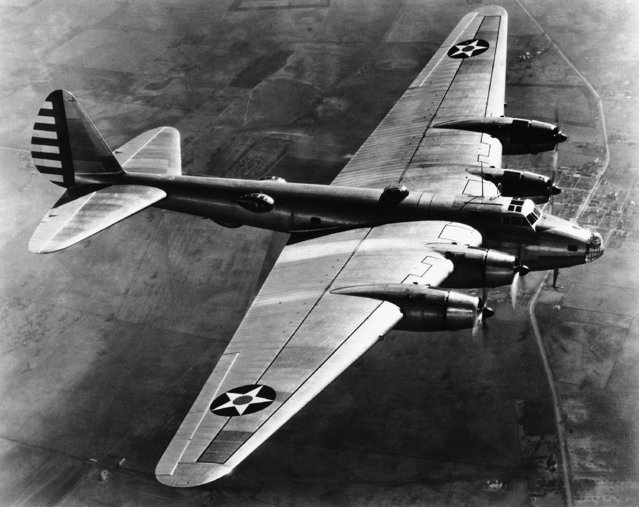 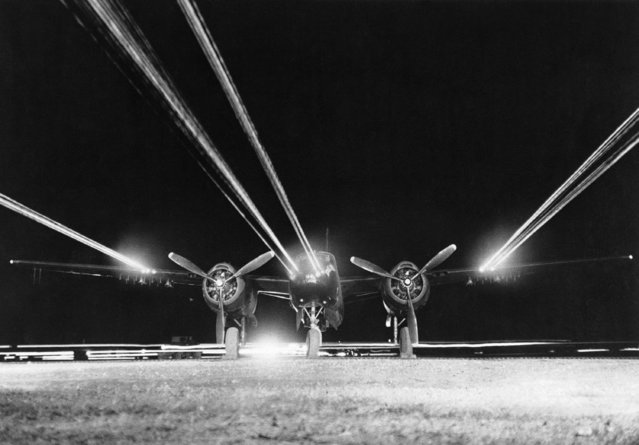 A U.S. Air Force B-26 light bomber has its 14 forward firing .50 caliber machine guns tested at an airfield in Korea prior to a night mission against communist targets on October 24, 1952. (Photo by AP Photo) 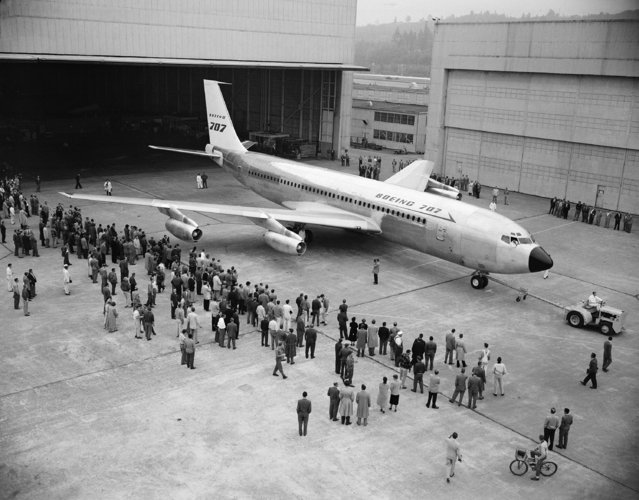 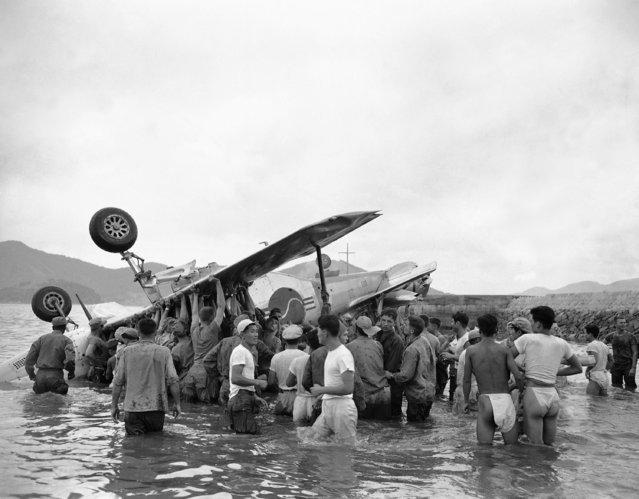 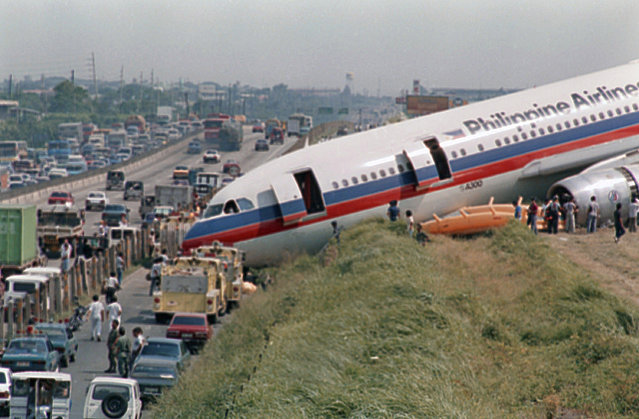 A Philippine Airlines A300 Airbus plane lies near the service road of a highway south of Manila after it overshot the runway, September 19, 1987 in Manila upon landing from Singapore. Nobody was injured among 135 passengers and crewmen on board. (Photo by Bullit Marquez/AP Photo) 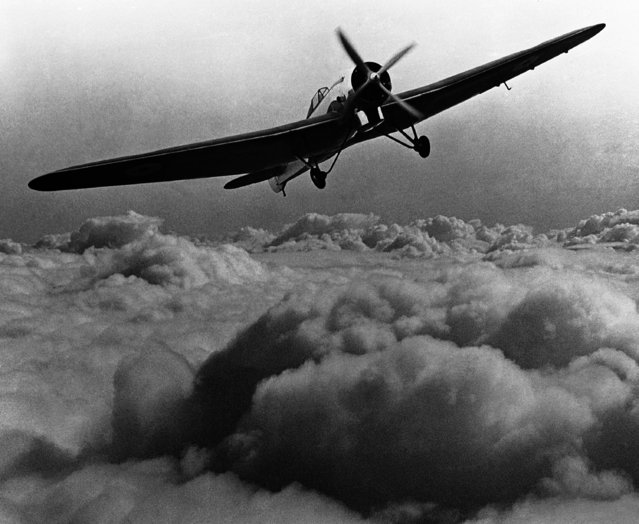 The plane used by Squadron-leader Francis Ronald Swain who has been chosen for the Royal Air Force high altitude record attempt which is to be made from Farnborough, Hampshire on September 19, 1936. Squadron Leader Swain will wear a specially designed oxygen suit, permitting free movement for the controls. The machine is a Bristol monoplane, the largest single-seater ever to be constructed. It is powered by a supercharges Pegasus engine, designed for 50,000 feet and over. It is estimated that 54,000 feet can be climbed in an hour in slow spiral climbs, during which 100 miles will be covered. (Photo by AP Photo/Staff/Putnam) 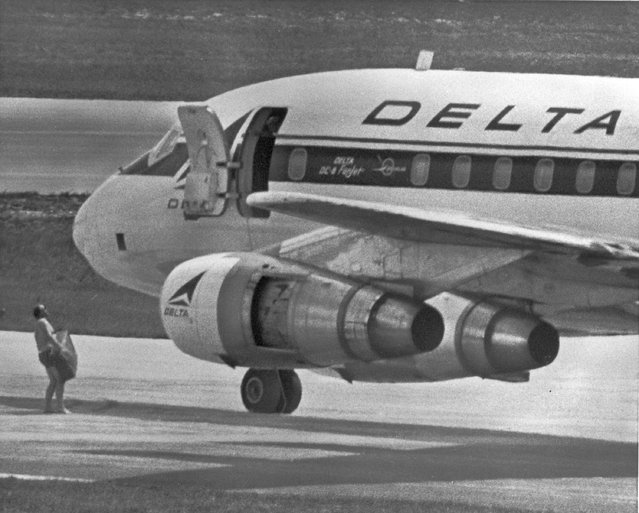 In this July 1972 file photo, an FBI agent, left, wearing only a pair of swim trunks, per the hijacker's instructions, carries a case containing a $1 million ransom to the opened door of a hijacked Delta DC8 jet in Miami. The hijackers demanded the ransom in exchange for freeing 86 people on board and free passage to Algeria. George Wright, a 1970s militant who carried out one of the most brazen plane hijackings in U.S. history, was taken into custody by local police in Almocageme, Portugal, Monday, Sept. 26, 2011 at the request of the U.S. government, which is seeking his extradition for escaping from a New Jersey jail on Aug. 19, 1970 after being convicted of murder. Wright was also named as one of the hijackers of the Delta flight in 1972. (Photo by James Kerlin/AP Photo) 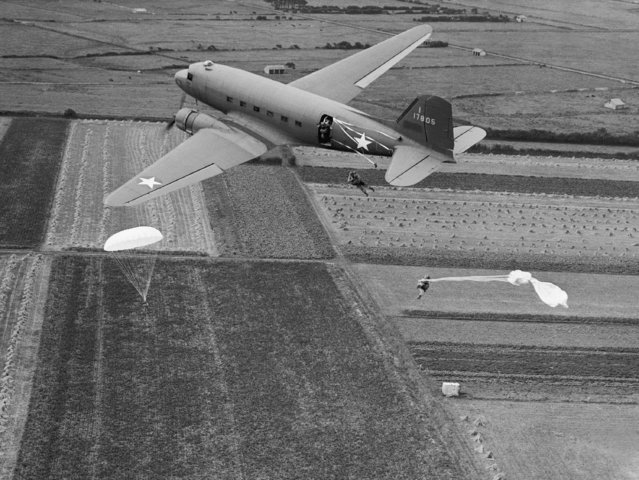 One paratrooper in training at a U.S. Army center in Britain has left plane, with his parachute just about to fill as the man behind him passes under the tail, with the third man at the door, about to jump, September 27, 1942. Parachutes that are open are from the element ahead. (Photo by AP Photo)
Edit Del
23 Nov 2017 08:26:00, post received 0 comments
Publication archive:
←   →
Popular tags:
All tags
Last searches: