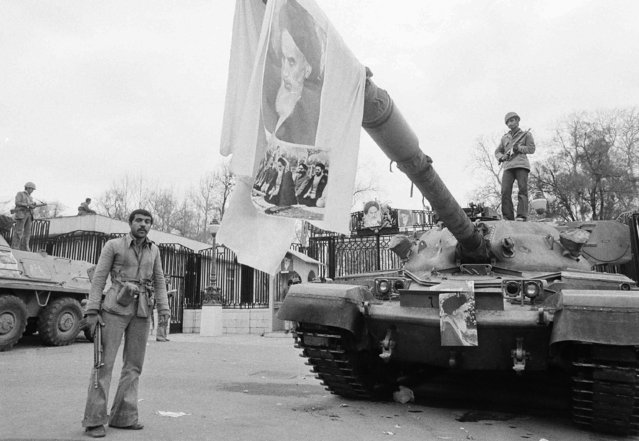 In this February 13, 1979 file photo, a large picture of Ayatollah Khomeini hangs from tank gun barrel in front of Niavaran Palace in Tehran, Iran. Forty years ago, Iran's ruling shah left his nation for the last time and an Islamic Revolution overthrew the vestiges of his caretaker government. The effects of the 1979 revolution, including the takeover of the U.S. Embassy in Tehran and ensuing hostage crisis, reverberate through decades of tense relations between Iran and America. (Photo by Aristotle Saris/AP Photo) 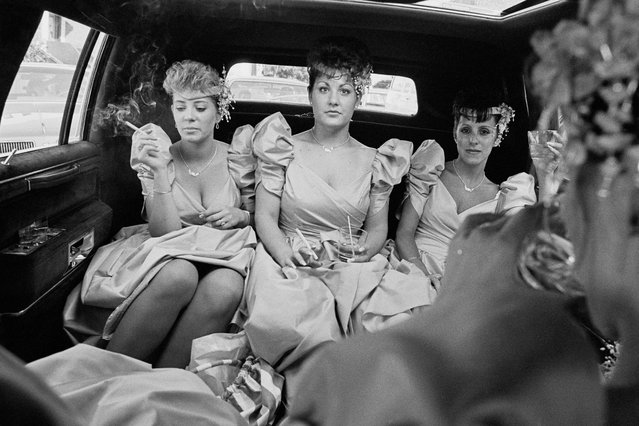 Bridesmaids Smoking, Brooklyn, USA, 1989: “This is my favourite picture”, says Kathy Shorr, “because these girls were familiar to me growing up in Brooklyn. They were tough: you wouldn’t want to get into an argument with them. But they were nice – it was a big happy group of about eight bridesmaids”. (Photo by Kathy Shorr/The Guardian) 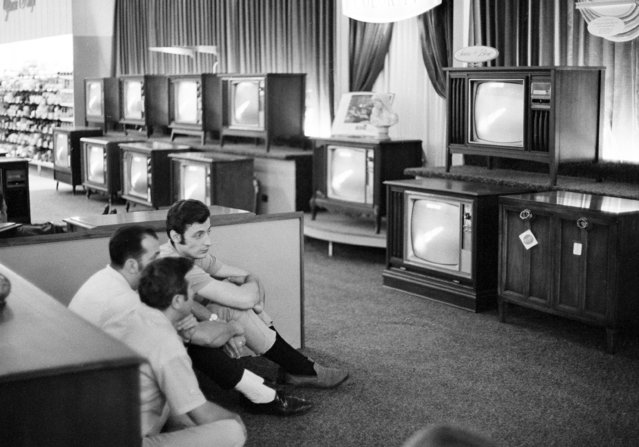 In this July 16, 1969, file photo people watch the Apollo 11 Saturn V rocket launch on multiple TV's at a Sears department store in White Plains, N.Y. Sears has filed for Chapter 11 bankruptcy protection Monday, Oct. 15, 2018, buckling under its massive debt load and staggering losses. The company once dominated the American landscape, but whether a smaller Sears can be viable remains in question. (Photo by Ron Frehm/AP Photo) 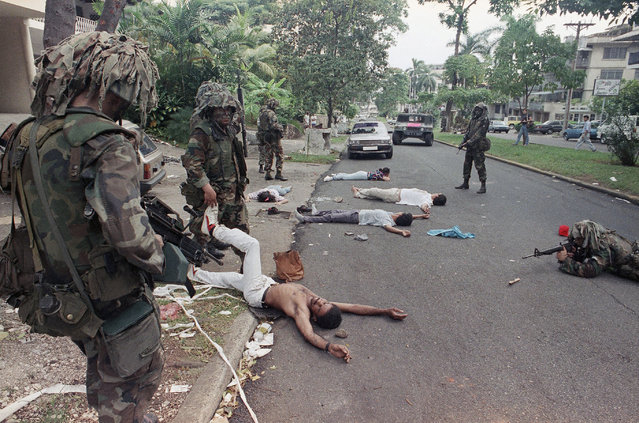 In this December 26, 1989 file photo, U.S. soldiers take aim while searching suspects detained outside the home of a business associate of Manuel Noriega in Panama City. In 1989, the U.S. invaded Panama to oust strongman Manuel Noriega. (Photo by Ezequiel Becerra/AP Photo) 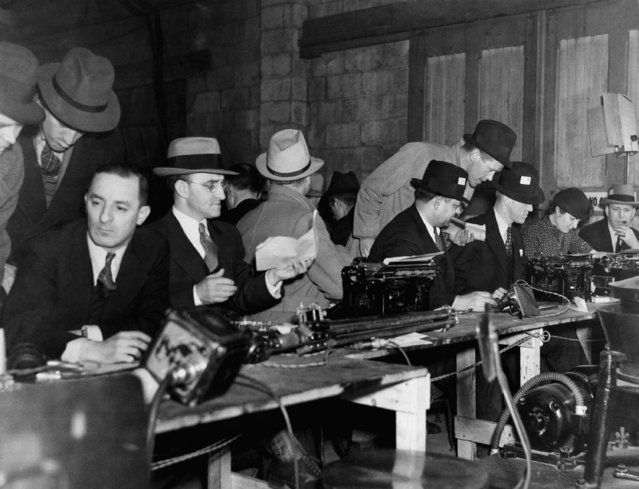 Newsmen in the press room in the prison garage are shown after Bruno Richard Hauptmann's execution in the electric chair, April 3, 1936. (Photo by John Lindsay/AP Photo) 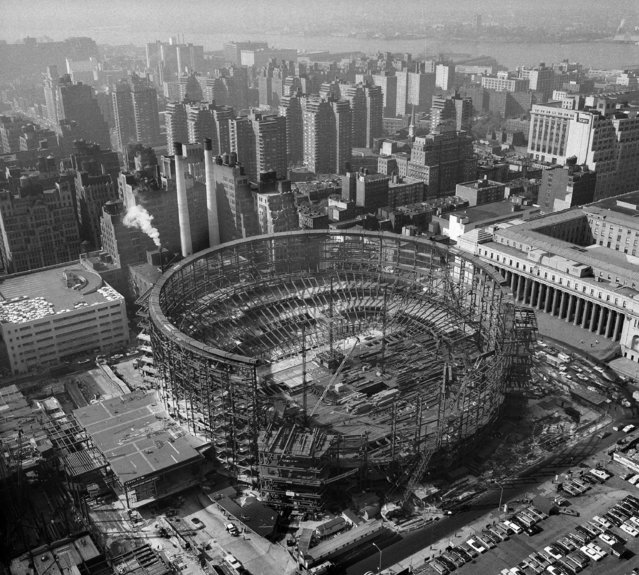 The arena of the new Madison Square Garden, in New York City, takes shape over Pennsylvania Station between 31st and 33rd Streets between Seventh and Eighth Avenues, shown August 24, 1966. The old station is virtually demolished. This view looks southeast from atop the New Yorker Hotel at 34th Street and Eighth Avenue. (Photo by Anthony Camerano/AP Photo) 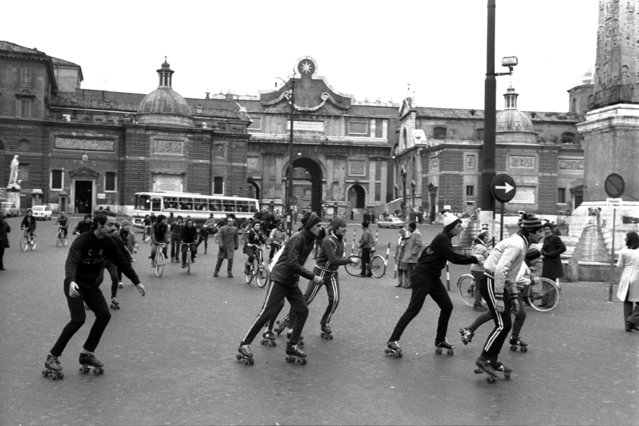 Rollerskaters and cyclists go at their will in Piazza del Popolo in downtown Rome Sunday December 2, 1973, first day under driving ban to cope with energy crisis. (Photo by AP Photo) 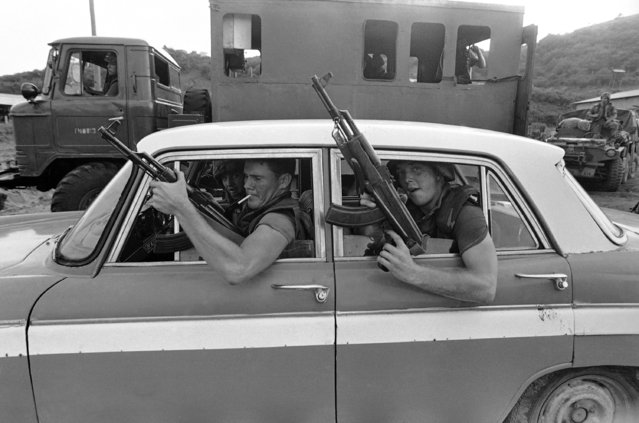 In this October 27, 1983 file photo, soldiers brandish captured AK-47 rifles from the windows of a civilian vehicle as they drive near Point Salines Airport in St. George, Grenada. In 1983, U.S. forces invaded the Caribbean island of Grenada after accusing the government of allying itself with Communist Cuba. (Photo by Doug Jennings/AP Photo) 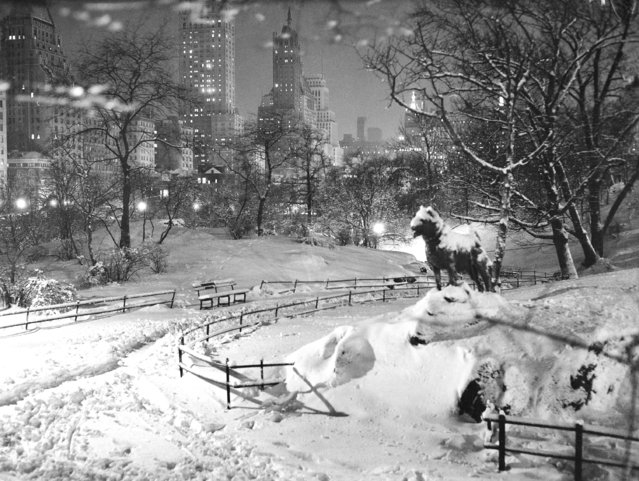 Trough the warmth of civilization lies just beyond, this statue of “Balto” the indomitable lead dog who carried that famous serum to Nome, appears to be in its element during New York's heavy snowfall. The brilliantly-lighted skyline of upper Fifth Avenue in the background in the Central Park on February 20, 1934. (Photo by AP Photo) 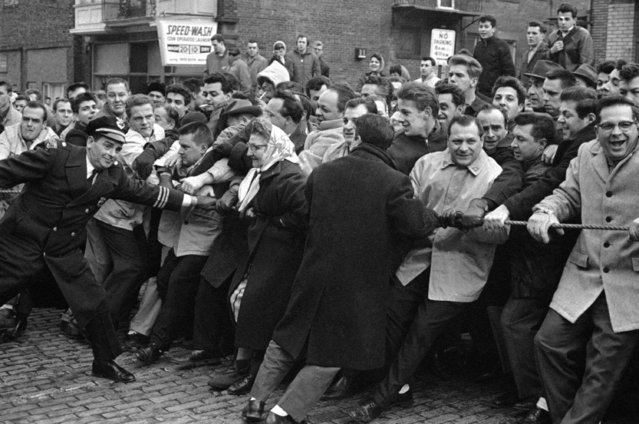 Pulling against a police-erected rope barrier which they later broke, are demonstrators who appeared January 30, 1964 at Murray Hill Public School in Cleveland to prevent a picket march on behalf of integration of classes in the grade school. The pickets did not appear as had been scheduled, but the crowd threw eggs, shouted and made trouble for policemen all morning. (Photo by Julian C. Wilson/AP Photo) 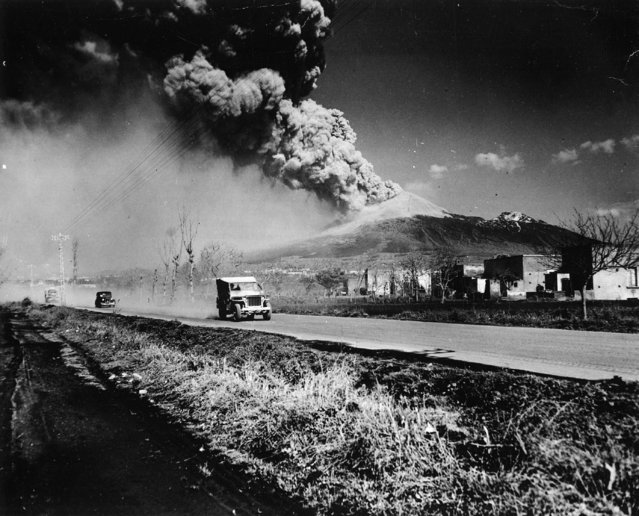 With Mt. Vesuvius smoking and spewing ash in the background, an Army jeep is seen speeding away from the inferno, as the volcano erupts shortly after the arrival of the Allied forces in Naples, on March 17, 1944. (Photo by AP Photo) 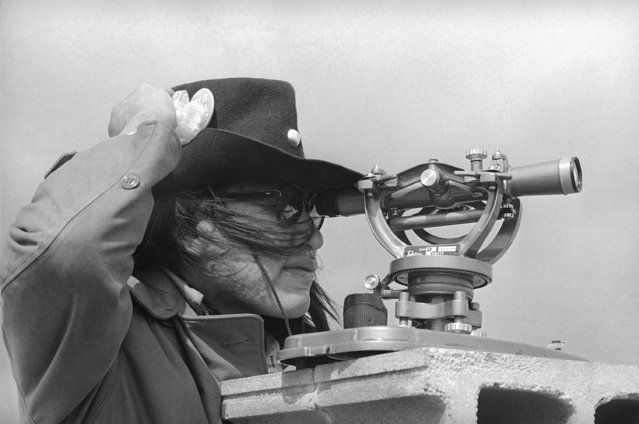 Constant watch is maintained on government movements by members of the American Indian Movement at Wounded Knee, South Dakota on March 23, 1973. Militant AIM members took over the tiny hamlet over three weeks ago. (Photo by Fred Jewell/AP Photo) 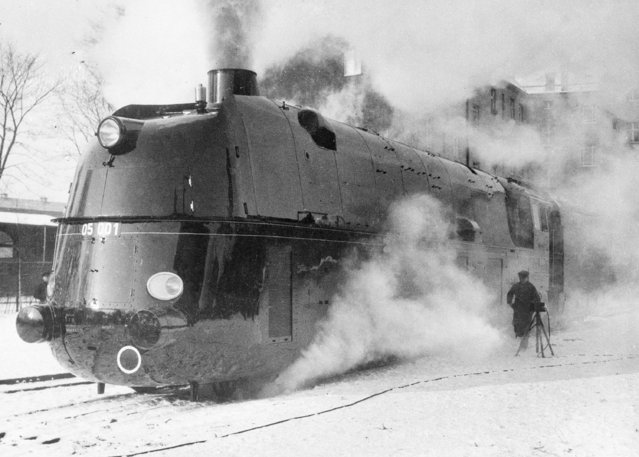 The streamlined engine of a German railway train is shown in Berlin, March 8, 1935. (Photo by AP Photo) 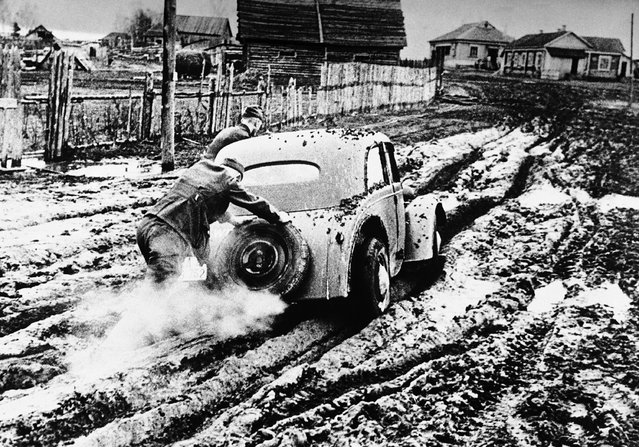 One of the German worker's cars, the Volkswagen, stuck in thick mud and being helped on by Nazi soldiers as it is unable to get on under its own power, somewhere in Russia on December 7, 1941. It also illustrates how this endless boggy mud is now greatly hampering and disorganizing the Nazi retreat. (Photo by AP Photo) 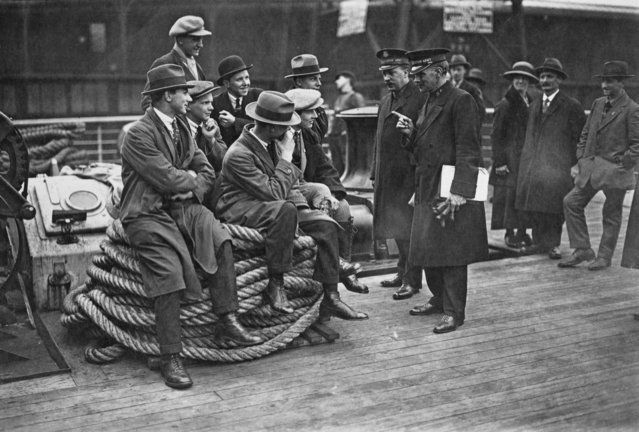 Salvation Army officers giving advice to a group of orphaned boys from the Dr Barnardo's Homes, as they leave for Canada on the 'RMS Antonia', UK, April 1923. (Photo by Topical Press Agency/Hulton Archive/Getty Images) 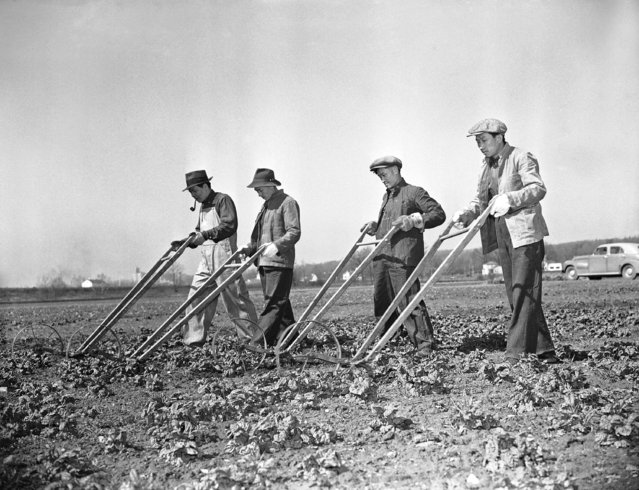 Four Chinese New Yorkers, answering the call for laborers to produce food required by the war effort, cultivate spinach on a farm near Albany, N.Y., May 6, 1943. Left to right: Hon Ying, Chen Ah Sue, Sing Ah Jang, and Wong Ah Sei. All were farmers in their native land. (Photo by AP Photo) 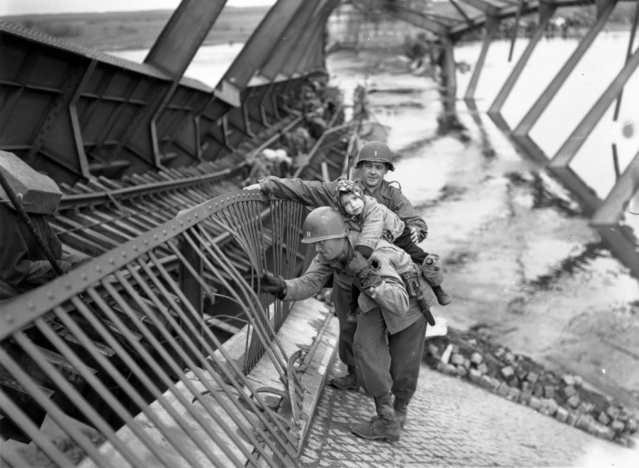 Captain J. McMahon, of the US 9th Army, carrying a child over a bombed bridge at the River Elbe, Tangemunde, 1st May 1945. The bridge was blown up by retreating German troops. (Photo by Fred Ramage/Keystone/Getty Images) 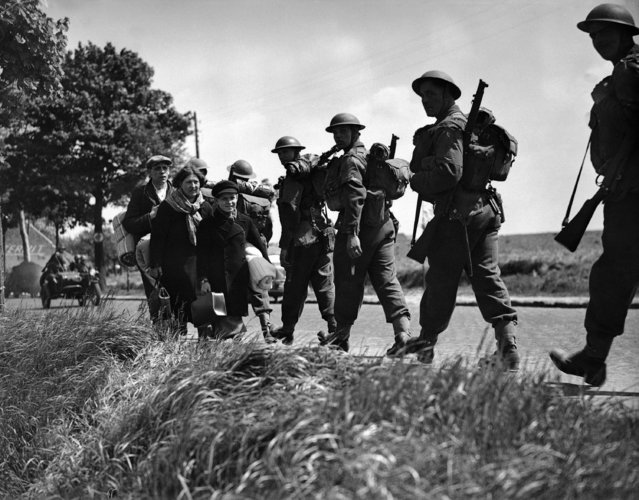 On a Belgian road, Belgian refugees, carrying all that they have been able to pack of their possessions, fleeing before the German invasion of their country. British soldiers, going forward in Belgium, passing refugees on May 17, 1940. (Photo by AP Photo) 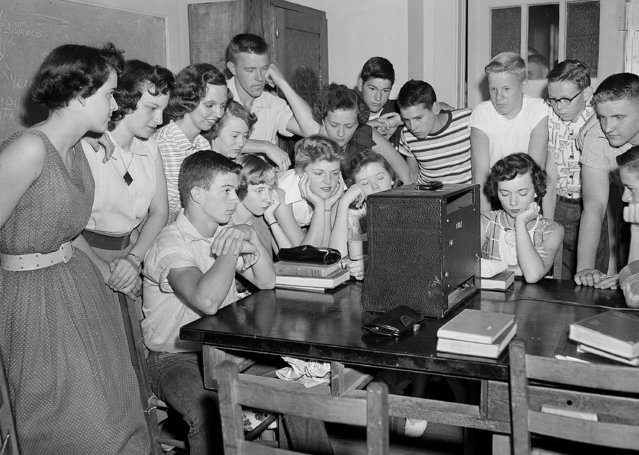 A group of students at the Russell High School in Atlanta, Ga., gather around a radio shortly after noon to hear news that segregation has been ruled out in public schools in a unanimous Supreme Court decision on May 17, 1954. (Photo by Horace Cort/AP Photo) 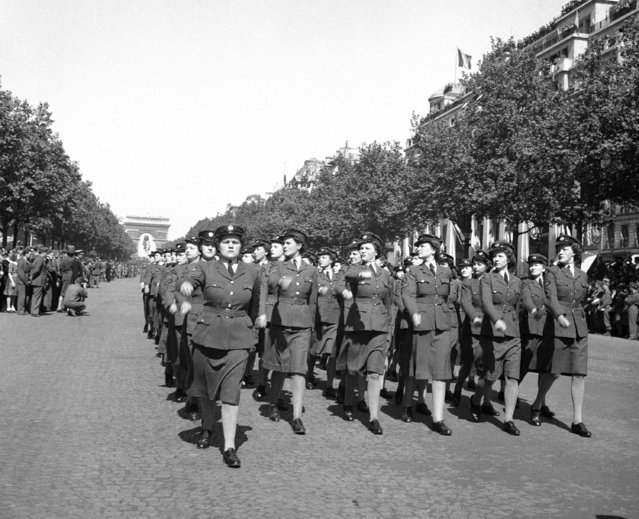 The Allied women with their colors parade down the Champs Elysees with the Arc de Triumph in the background in Paris on May 23, 1945. (Photo by AP Photo)
Edit Del
01 Feb 2019 00:01:00, post received 0 comments
Publication archive:
←   →
Popular tags:
All tags
Last searches: