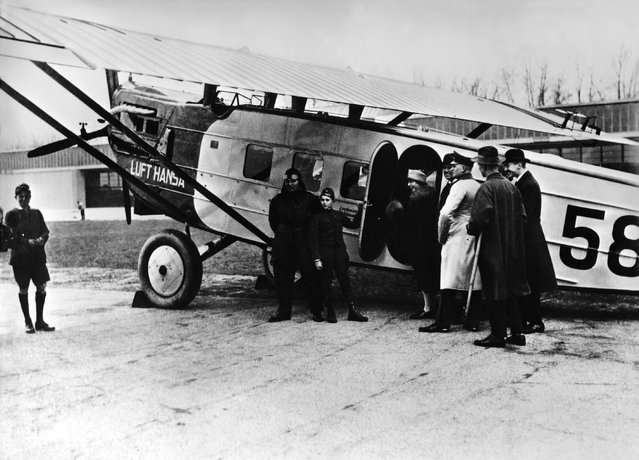 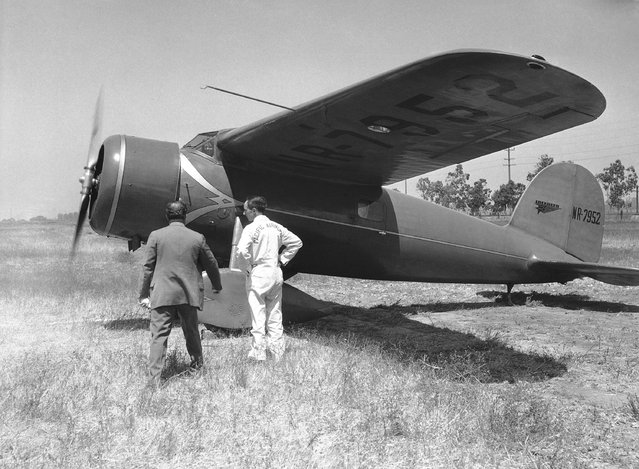 Amelia Earhart Putnam in her Lockheed Vega plane in which she was the first woman to make a transatlantic flight, August 24, 1932. She started on her attempted to set a transcontinental record from Los Angeles to Newark, N.J. (Photo by AP Photo) 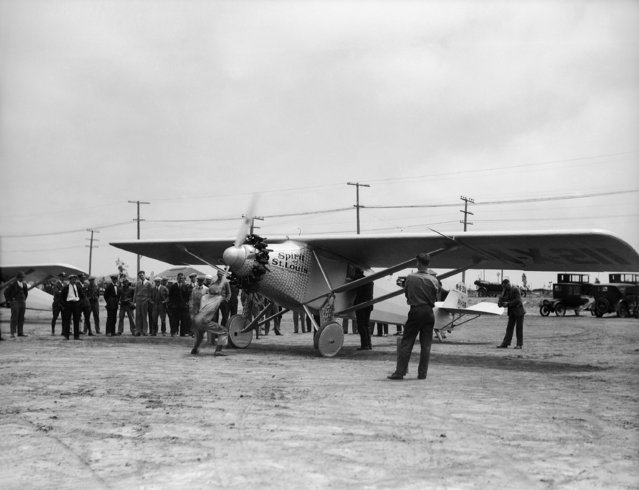 The Sprit of St. Louis, the $7,500 monoplane shown May 2, 1927 in which Charles A. Lindbergh, St. Louis airmail pilot will attempt the New York ? Paris flight in competition for the Orteig $25,000 prize. The plane was completed and tested at San Diego, Calif. It has a wing span of 46 feet, weights 4,750 pounds and has a cruising speed of 105 miles an hour. Tank capacity for 425 gallons of gasoline and 28 gallons of oil. (Photo by AP Photo) 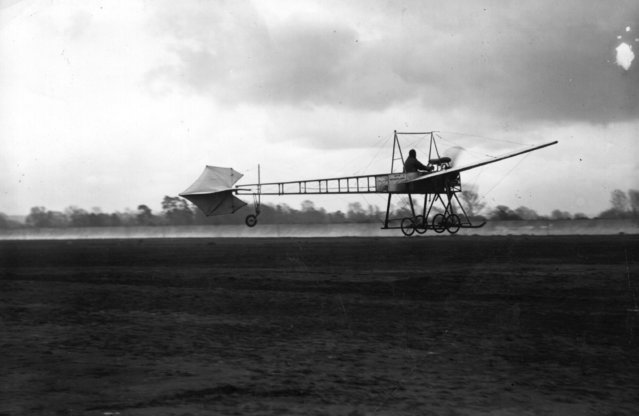 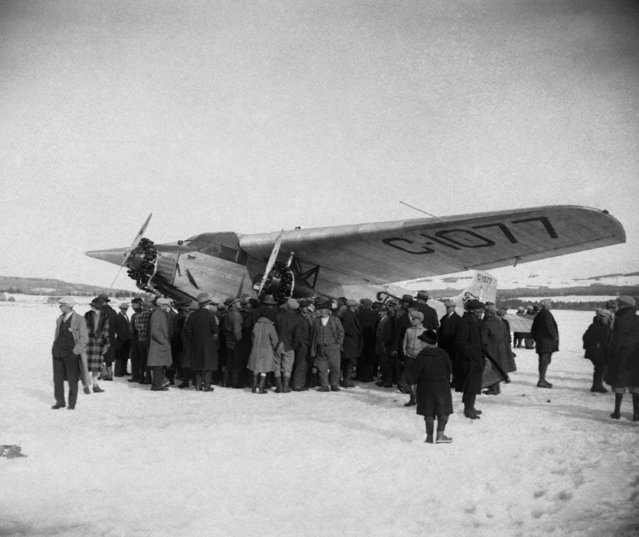 The first plane to make westward trans-Atlantic flight, are welcomed at Lake Ste. Agnes, Que in Canada on April 27, 1928 after non-stop flight in the Ford Relief plane. (Photo by AP Photo) 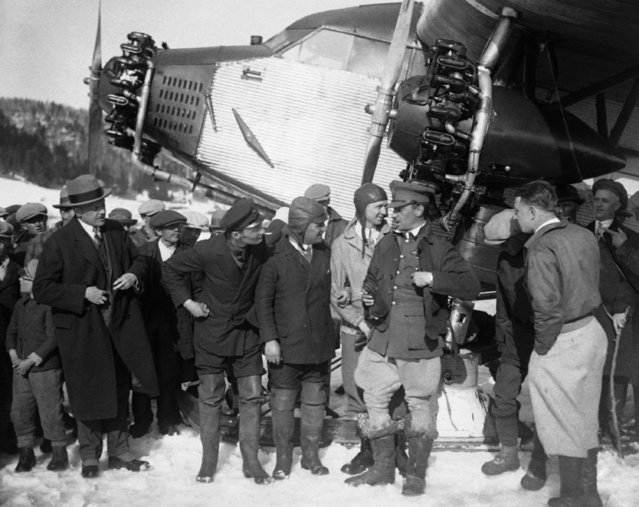 The first plane to make westward trans-Atlantic flight, is welcomed at Lake Ste. Agnes, Que in Canada on April 27, 1928 after non-stop flight in the Ford Relief plane. Crew of Bremen. (Photo by AP Photo) 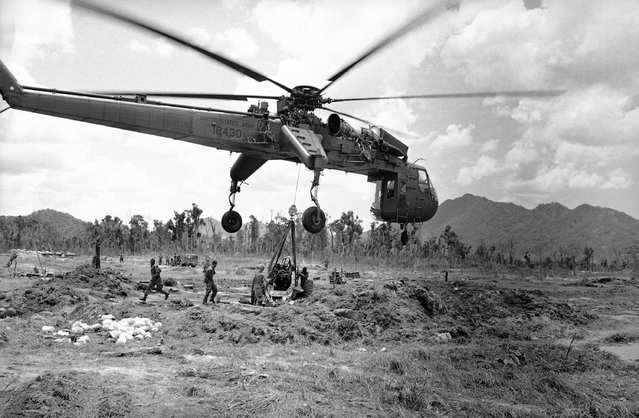 An artilleryman of the U.S. 1st Air Cavalry division stands atop a 105mm Howitzer, signaling a helicopter which later picked it up and flew it out of the a Shau Valley on May 16, 1968. The U.S. command in South Vietnam closed out month-long operation Delaware on May 17, leaving the valley to the North Vietnamese. (Photo by Dana Stone/AP Photo) 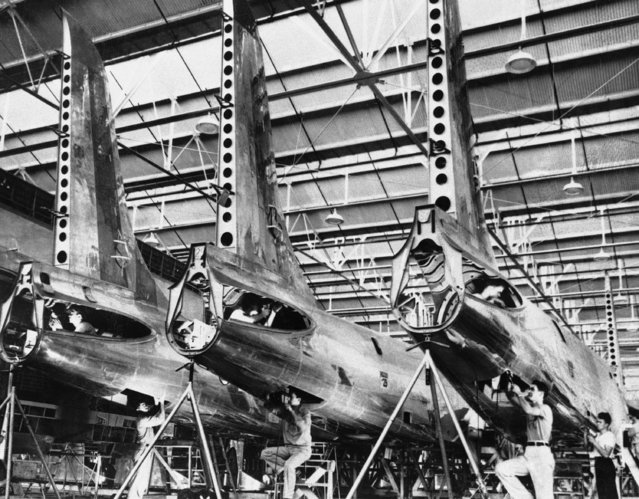 Swift and formidable bombers for the United States air defence move three abreast down production lines of the Douglas Aircraft company's in Santa Monica, California on April 30, 1941, plant with 18,000 employees maintaining operations around the clock, this plant and the Douglas division at El Segundo are accelerating their-output of military planes to meet the needs of national security. (Photo by AP Photo) 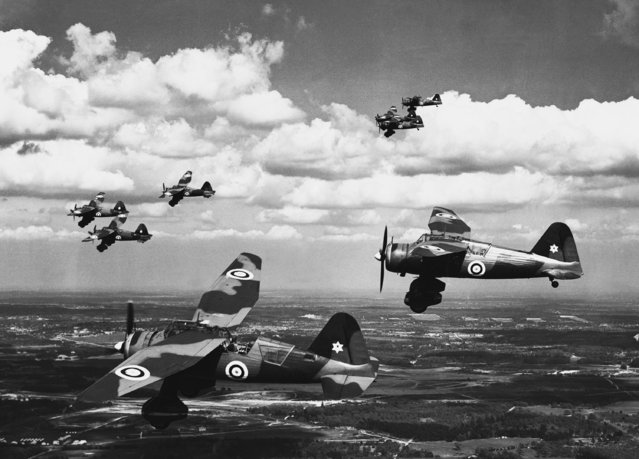 Lysander Aircraft practicing for the forthcoming Empire Air Day over Odiham, Hants, on May 9 1939, with their camouflaged wings and fuselage it can easily be imagined how difficult they are to spot when seen against the ground from above, and, though the intention for which they were designed is warlike, they make a strikingly beautiful picture was they glide gently along in the air against a background of fleecy summer clouds. (Photo by AP Photo) 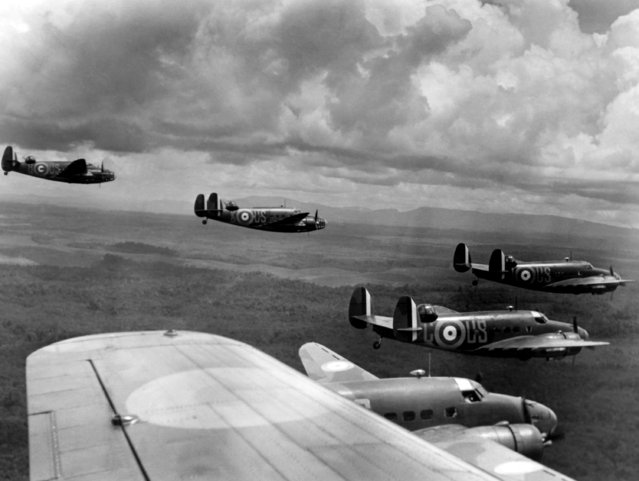 American-made bombers of the Royal Australian Air Force fly over Singapore Islands on May 4, 1941 in close formation during maneuvers. (Photo by Mc Daniel/AP Photo) 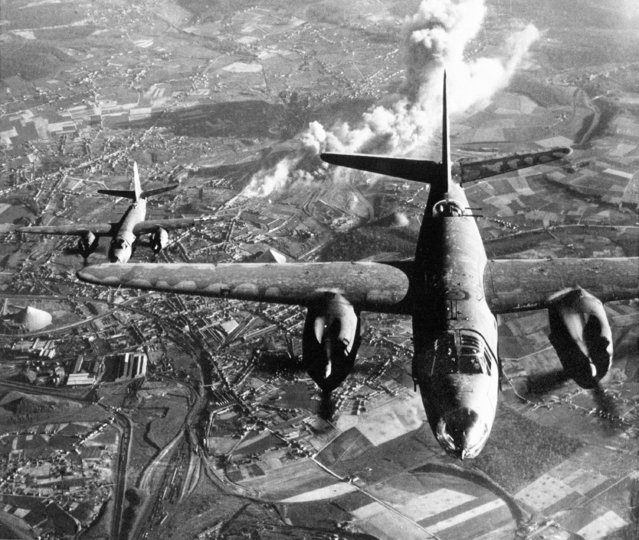 In this image provided by the U.S. Army Air Force, Martin B-26 Marauder bombers, of the U.S. 9th Air Force, return to England from a mission over Charleroi, Belgium, April 18, 1944. The bombers' targets were a railway yard and power station. Allied bombing missions against communication and transportation targets in northern Europe were important to the success of the Normandy invasion in June. (Photo by AP Photo/U.S. Army Air Force, Wever) 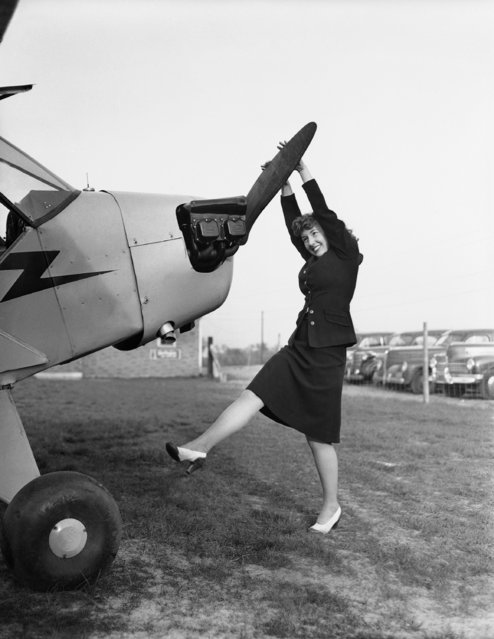 Norma Ellen Kristoff, the first of the girls at the big defense plant to join the flying club poses with a propeller plane in Hobart, Indiana, May 7, 1942. She is employed as a secretary in the company's office. (Photo by AP Photo) 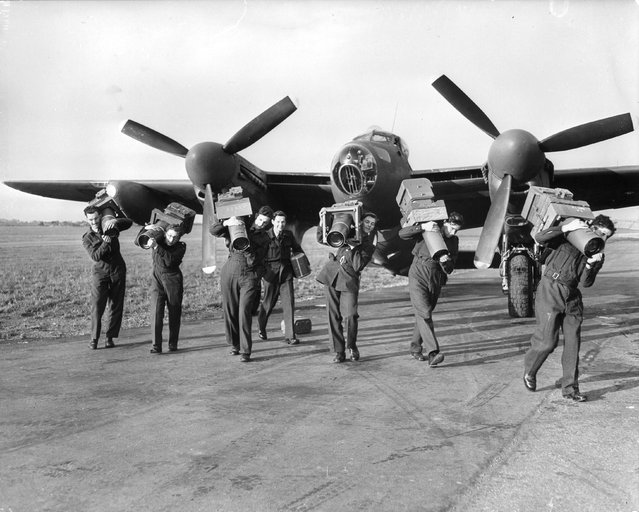 Airmen of the Photographic Reconnaissance branch of the Royal Airforce unloading giant cameras from one of the Mosquito planes at the Central Photographic Establishment in Benson, Oxfordshire, 17th April 1950. They are making aerial photographs of towns all over Britain in order to bring the Ordinance Survey maps up to date. (Photo by Central Press/Getty Images) 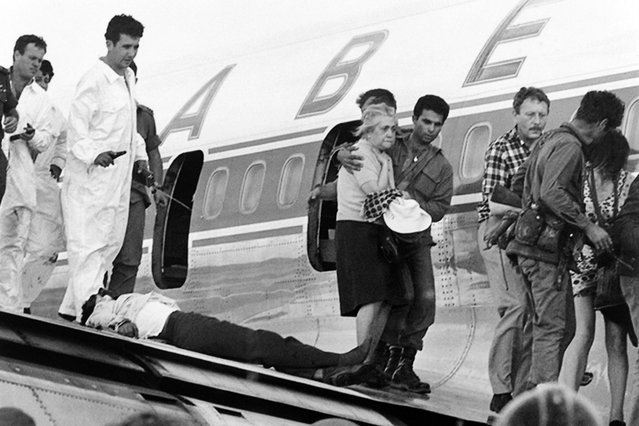 File picture taken on May 9, 1972 shows Ehud Barak, dressed in a serviceman uniform as a fighter in a special anti-terror unit, paticipating in the storming of the hijacked Sabena airlines, at the lod airport. (Photo by AFP Photo/Stringer) 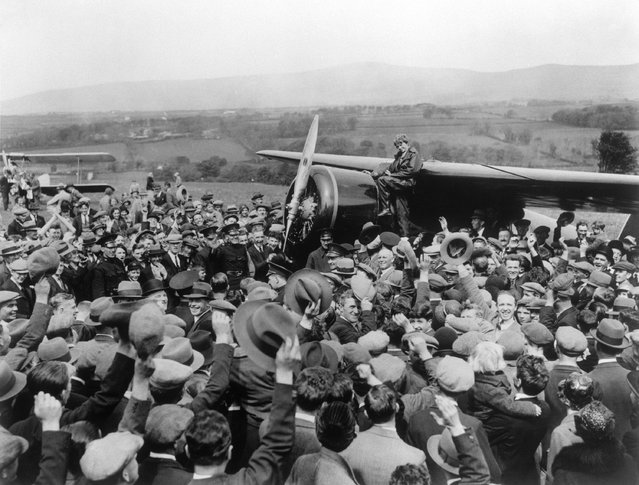 A crowd cheers for aviatrix Amelia Earhart as she boards her single-engine Lockheed Vega airplane in Londonderry, Northern Ireland, for the trip back to London on May 22, 1932. Earhart became the first woman to fly solo nonstop across the Atlantic Ocean when she finished her 2,026 mile journey on May 21, 1932 in under 15 hours after departing from Harbour Grace, Newfoundland. Earhart vanished mysteriously over the Pacific during her attempted round-the-world flight in 1937. (Photo by AP Photo) 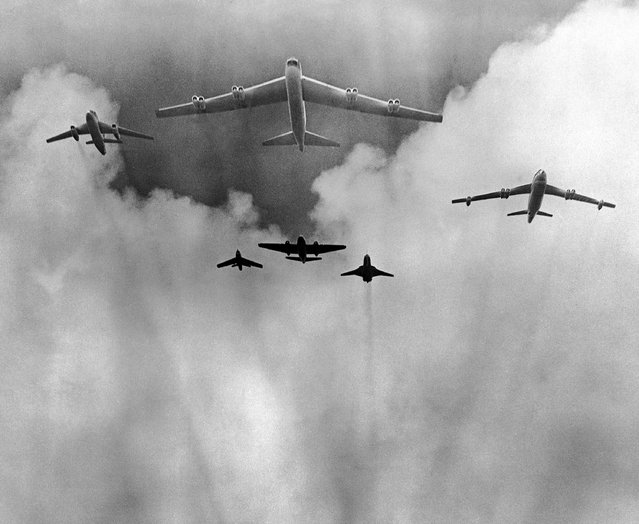 When the H bomb is dropped on Namu, tiny atoll near Kwajalein in the Marshall Islands, these planes, shown on May 16, 1956, will play supporting roles. Led by the huge B52 Stratofortress, which will drop the bomb, the other planes top row, left to right: B66, B52, and B47. Rear row, left to right: F84, B57 and RF101. The bomb was scheduled to be dropped, but a short time before drop time was postponed for the eighth time. It was rescheduled for the next day. (Photo by AP Photo) 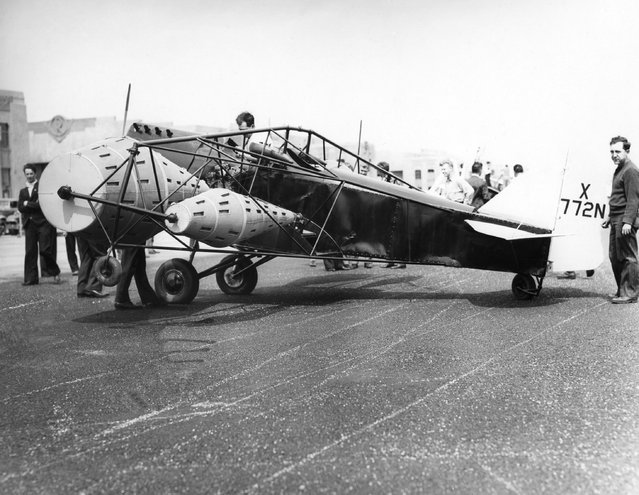 The rotor principle has been applied to airplanes by I.C. Popper as shown in this new plane at Roosevelt Field, N.Y., May 16, 1932. Four conical rotors, or spindles, replace the plane's wings. The ship is equipped with three motors, two of them running the rotors and the other supplying the traction. The inventor claims it has double the lifting power of a winged plane and can be landed at half the speed. (Photo by AP Photo) 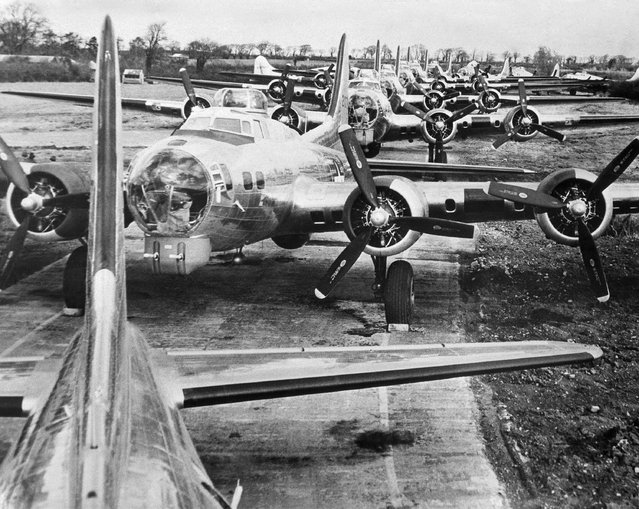