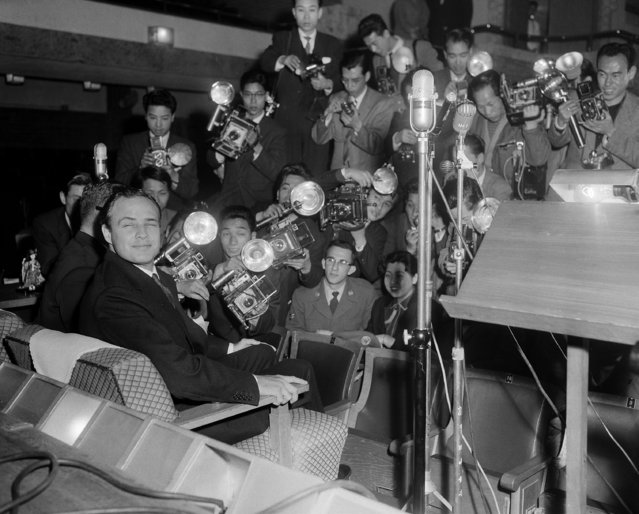 Actor Marlon Brando, who arrived in Japan, April 3, 1956 for the premiere of “Guys and Dolls” and the filming of “Teahouse of the August Moon” in which he will star. Brando held a press conference that turned into a photo session at the Imperial Hotel in Downtown Tokyo, April 4, 1956. (Photo by AP Photo) 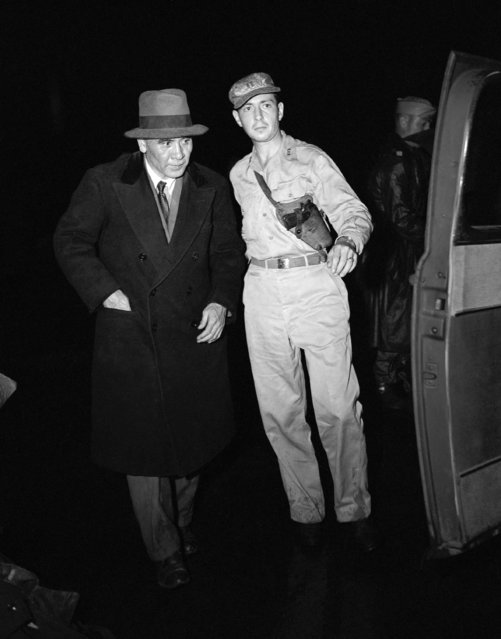 Japanese Lt. Gen. Masaharu Homma, left, is escorted from an Army plane by a military policeman upon arriving in Manila, Philippines on December 13, 1945, for his war crimes trial involving the deaths of 67,000 American and Filipino prisoners of war during the Bataan Death March. (Photo by Max Desfor/AP Photo) 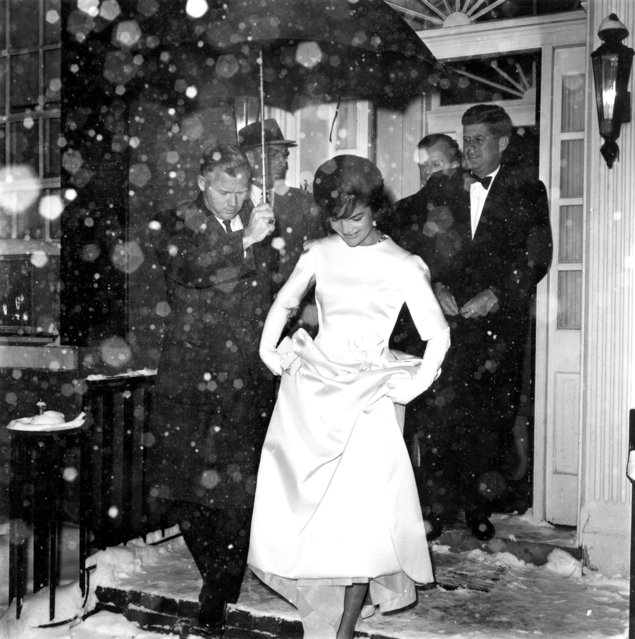 Jacqueline Kennedy lifts the skirt of her inaugural ball gown as she and her husband, President-elect John F. Kennedy, leave their Georgetown home in the snowfall en route to the inaugural concert in Washington, D.C., January 19, 1961. (Photo by AP Photo) 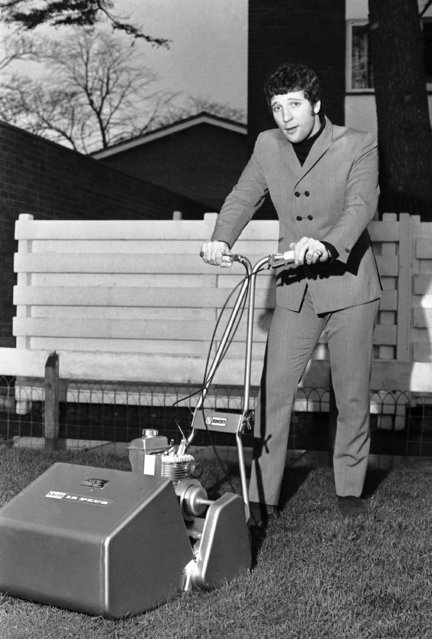 Tom Jones, Britain's leading male pop singer tries his hand a mowing the lawn in the garden of his home at Shepperton, England, on January 25, 1967, with the gold lawnmower presented to him by the Valor Company on the occasion of the sale of over one million copies of his recording “The Green, Green, Grass of Home”. (Photo by AP Photo) 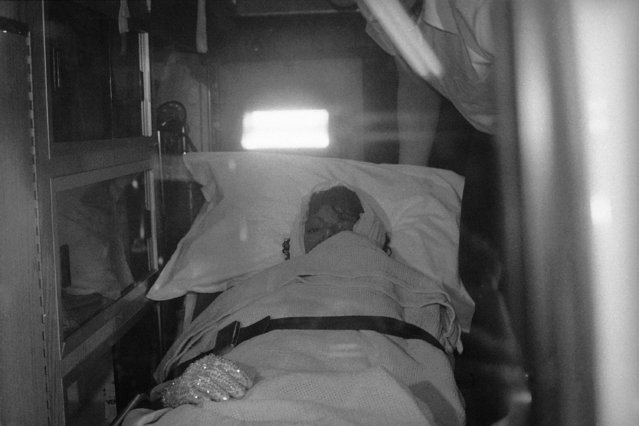 Singer Michael Jackson looks out from an ambulance as he arrives at Brotman Memorial Hospital in Culver City, January 27, 1984, after suffering second-degree burns on his scalp while filming a Pepsi commercial, according to officials. (Photo by Lennox McLendon/AP Photo) 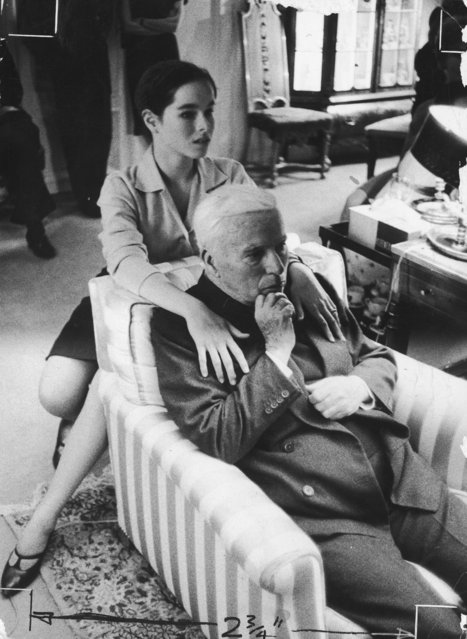 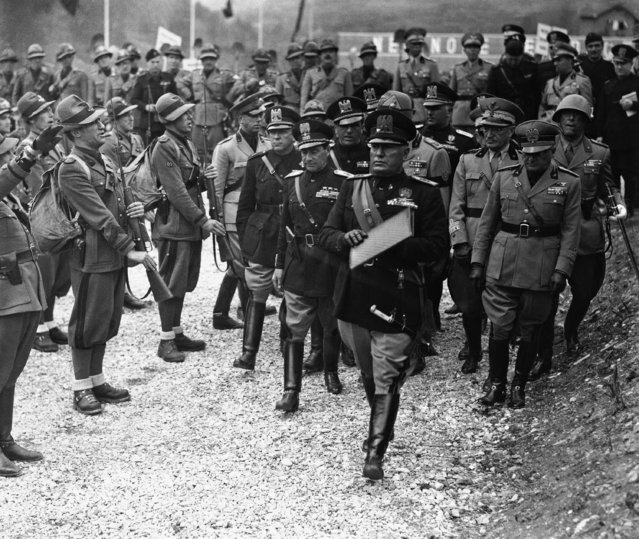 During his tour of Northern Italy, Il Duce arrived at Bardonecchia, on the Italo-French frontier. He examined the frontier defences and a salute of heavy guns made the mountains ring. Italian dictator Benito Mussolini inspecting Italian Alpine Troops during his visit to Bardonecchia, Italy, on May 16, 1939. (Photo by AP Photo) 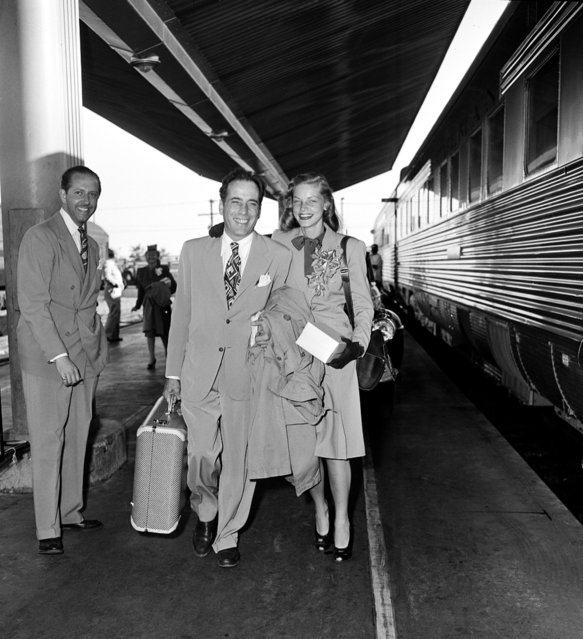 Actor Humphrey Bogart and actress Lauren Bacall are shown at a train station before they board the Santa Fe in Los Angeles, Ca., on May 18, 1945. The couple will travel to Mansfield, Ohio, where they will get married at a friend's farm. The person at left is unidentified. (Photo by AP Photo) 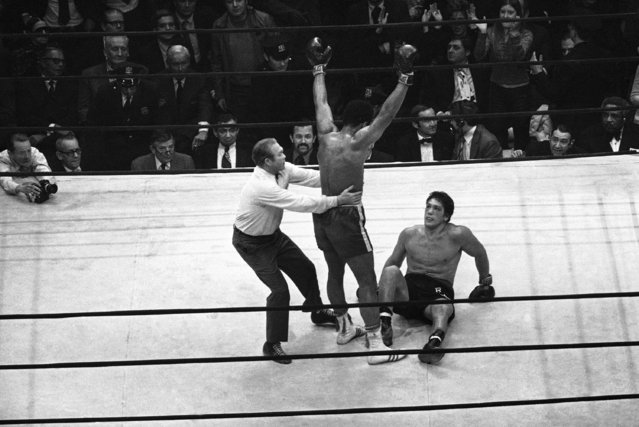 Muhammad Ali “Cassius Clay” raises his hands triumphantly after dropping Oscar Bonavena for second time in 15th round of garden bout in New York on Monday, December 7, 1970. Referee Mark Conn tries to pull him away to neutral corner. (Photo by AP Photo) 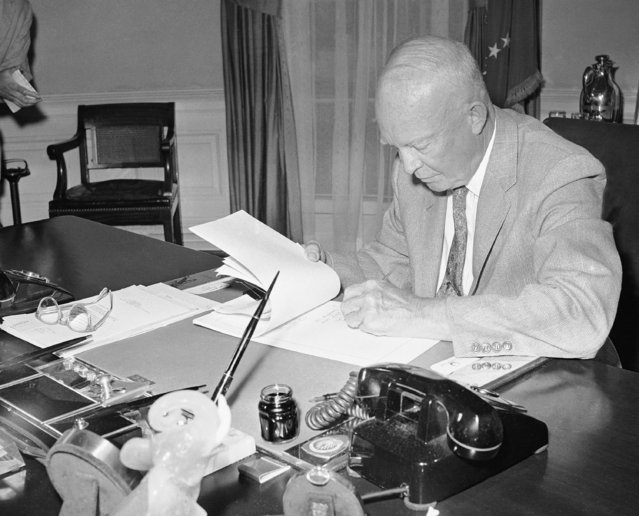 President Dwight D. Eisenhower signs the Alaska statehood bill, July 7, 1958, in Washington. This paves the way for the territory's admission to the Union later this year. (Photo by Charles Gorry/AP Photo) 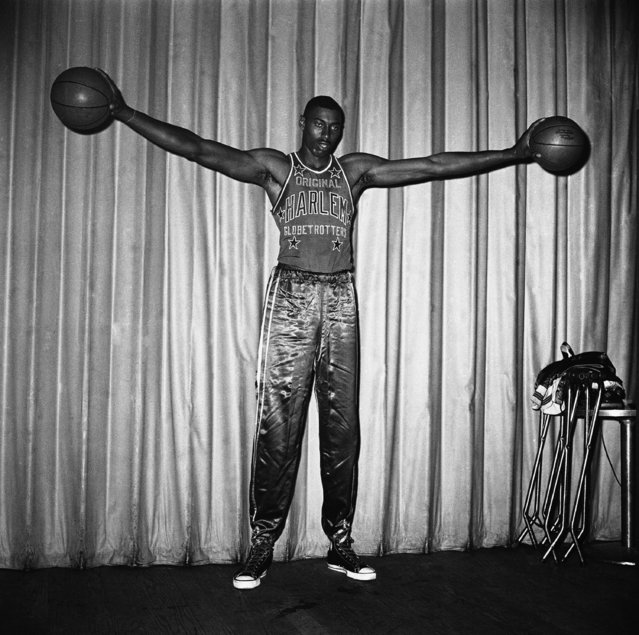 Wilt (The Stilt) Chamberlain, who quit the University of Kansas at the end of his junior year last month, will join the Harlem Globetrotters' Basketball Team, June 17, 1958. (Photo by AP Photo/Camerano) 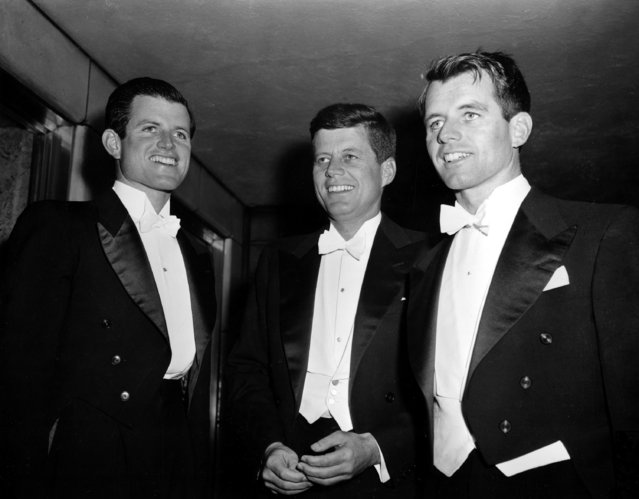 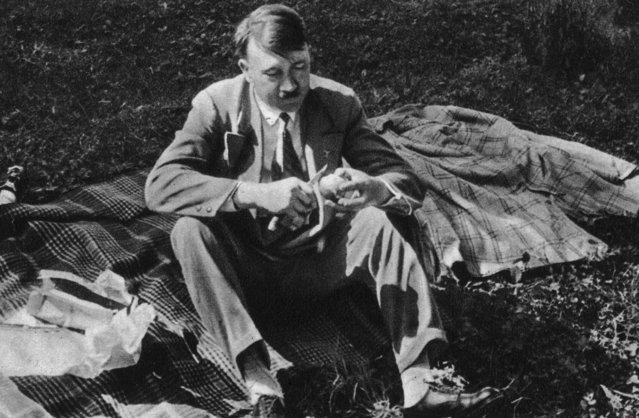 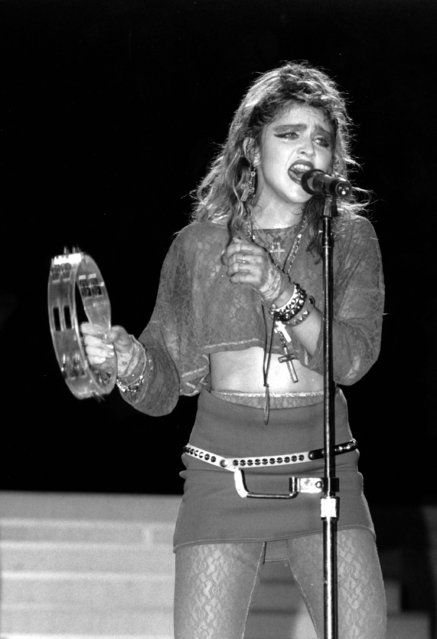 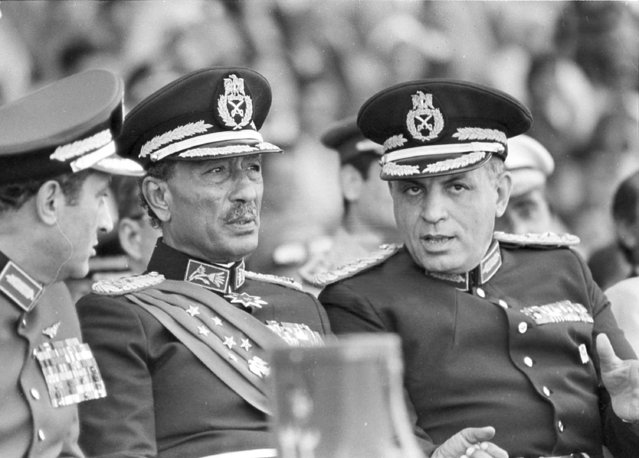 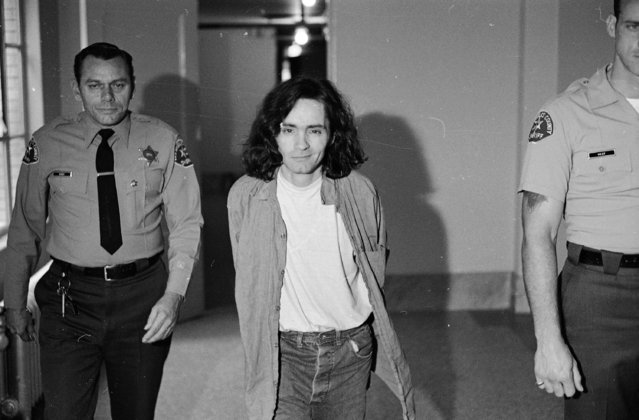 Charles Manson is clean-shaven for the second time since his arrest, as he walks to the room where he listens to proceedings in his trial on murder charges in the Sharon Tate slayings, October 21, 1970. Manson and three women defendants in the case have been banished from the courtroom because of their misbehavior. (Photo by George Brich/AP Photo) 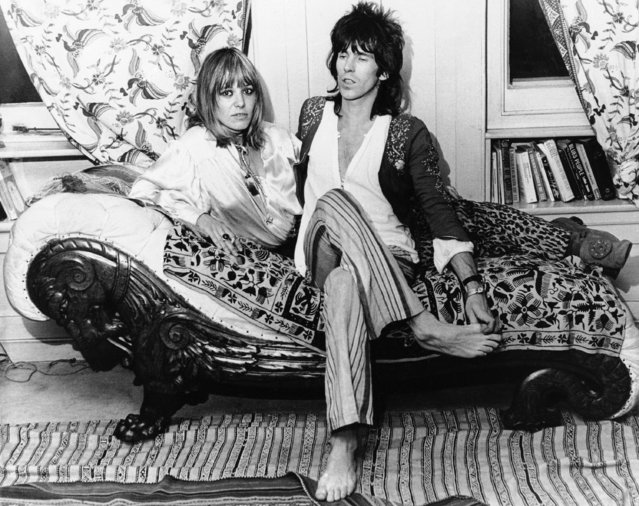 Keith Richards of the Rolling Stones rock group and his German girlfriend Anita Pallenberg relax at his home in London, December 8, 1969, after he flew in from the U.S. where the group had been on tour. Miss Pallenberg complained that the British government had ordered her to marry Richards or get out of the country. The Home Office, which is responsible for deciding such things, said “We cannot understand this complaint. We have informed Miss Pallenberg that her permit to stay in this country has been extended until next October. The usual steps were taken to inform her”. (Photo by Peter Kemp/AP Photo) 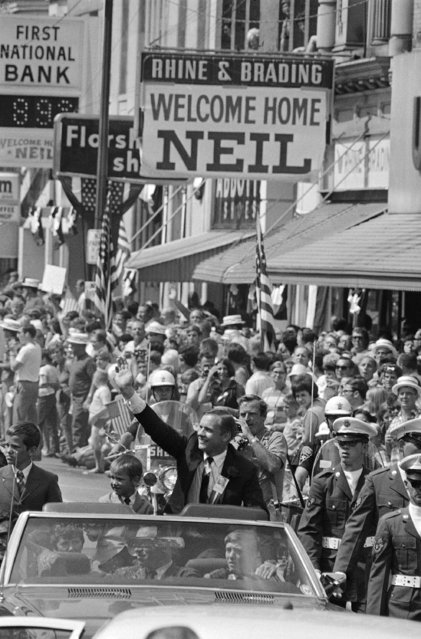 Neil Armstrong, the first man to walk on the moon and a hero to the world, waves to the hometown folks on September 6, 1969 during a big homecoming parade in his honor at Wapakoneta, Ohio. Armstrong's son, Mark, is beside him. (Photo by AP Photo) 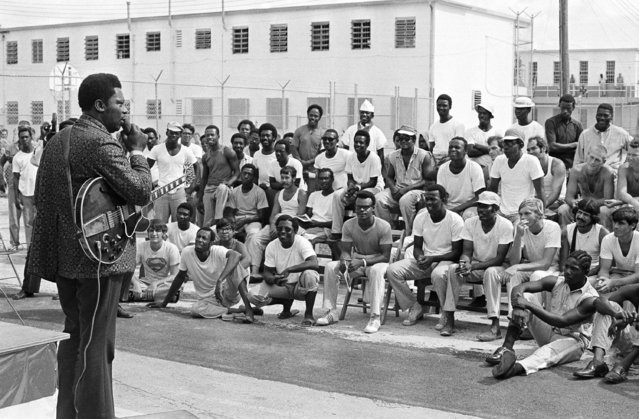 A group of prisoners at the Dade County stockade listen to B.B. King (left) as entertained them outside their cells, September 23, 1971 in Miami, Fla. King said he first sang to prisoners at the Cook County jail in Chicago and plans about a dozen more such performances. (Photo by AP Photo) 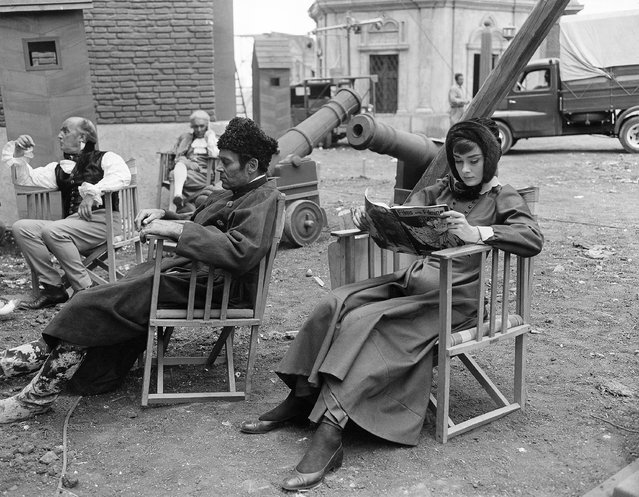