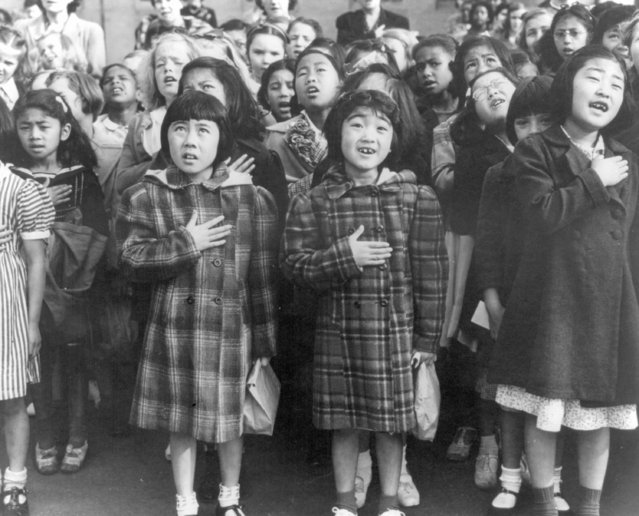 In this April 1942 file photo made available by the Library of Congress, children at the Weill public school in San Francisco recite the Pledge of Allegiance. Some of them are evacuees of Japanese ancestry who will be housed in War Relocation Authority centers for the duration of World War II. Throughout American history, during times of war and unrest, authorities have cited various reasons and laws to take children away from their parents. Examples include Native American boarding schools, Japanese internment camps and deportations that happened during the Great Depression. (Photo by Dorothea Lange/U.S. War Relocation Authority via AP Photo) 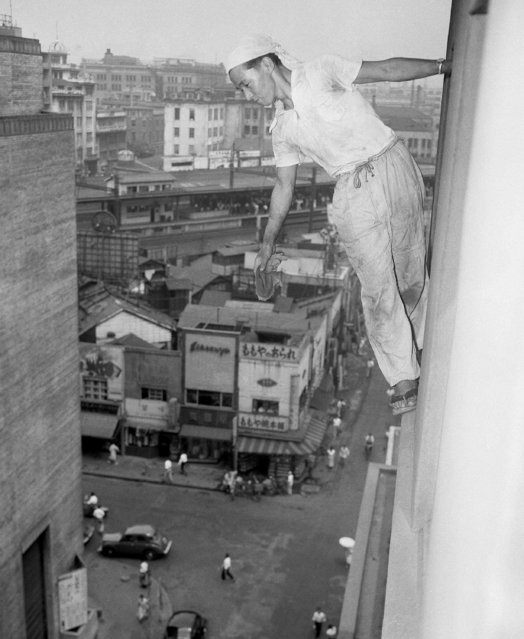 The window-washer takes a brief break to watch the cars and people move ant-like about the street six floors below of the Asahi Shimbun Building in downtown Tokyo on August 18, 1954. The way he goes about his work would be considered insane by his safety conscious counterpart in the United States. He uses no safety belt or hooks of any kind and moves along the two-inch wide ledge on straw sandals known as “Zorries”. He maintains his precarious perch by holding on the window with one hand while washing with the other. (Photo by Mike Yamaguchi/AP Photo) 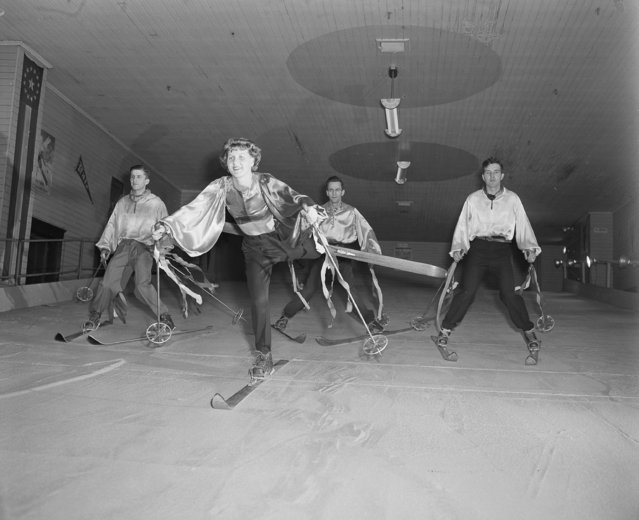 Edith Toon of East Milton, Mass., slides down slope on one ski as she and others perform a “ski ballet” at Bob Johnson's indoor Ski School at Newton Corner, Mass., December 2, 1947. The students in the background are, left to right: Frank A. Day III, of Newton and Walter McCann, of Waltham, Mass. The trio are part of a large group of avid skiers who can't wait until the natural white stuff starts falling outside. (Photo by AP Photo) 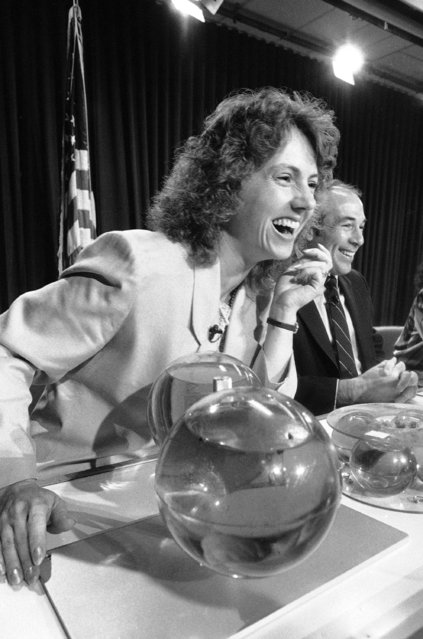 Space teacher Christa McAuliffe responds to a question at a press conference at the Johnson Space Center in Houston, Texas, December 13, 1985. In front of McAuliffe is the Hughes fluid experiment that will fly on her mission, seated next to McAuliffe is Hughes payload specialist Gregory B. Jarvis. (Photo by R.J. Carson/AP Photo) 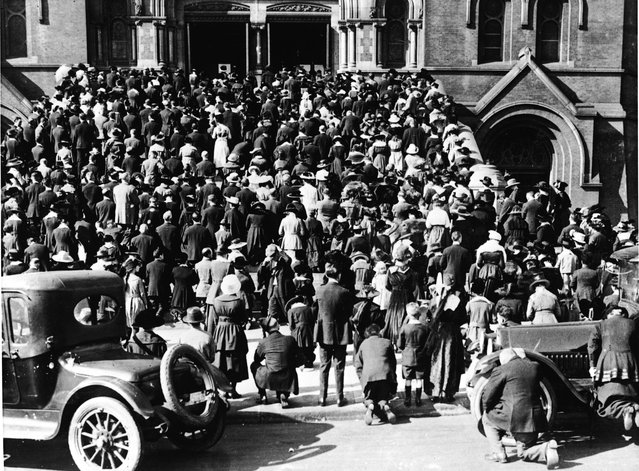 The congregation praying on the steps of the Cathedral of Saint Mary of the Assumption, where they gathered to hear mass and pray during the influenza epidemic, San Francisco, California, 1918. (Photo by Archive Photos/Getty Images) 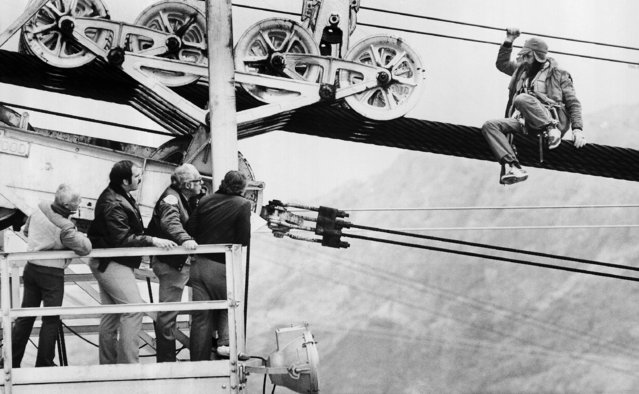 Steve McPeak, right, talks with Hoover Dam security officials several hours before he agreed to come down from his perch high above the Colorado River next to the dam in Las Vegas, December 9, 1982. McPeak spent 3 days and 2 nights on the cables in what he claimed was a protest of President Reagan's policy of economic aid to Brazil. (Photo by Scott Henry/AP Photo) 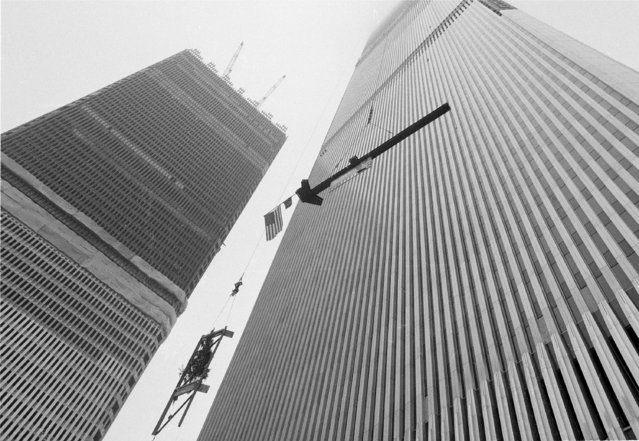 The American flag, attached to a 36-foot-long, four-ton steel column, is hoisted to the top of the north tower building of the World Trade Center in New York City, December 23, 1970. The traditional ceremony, know as topping out, marks the completion of the 1,350-foot structure which is the world's tallest building. (Photo by Anthony Camerano/AP Photo) 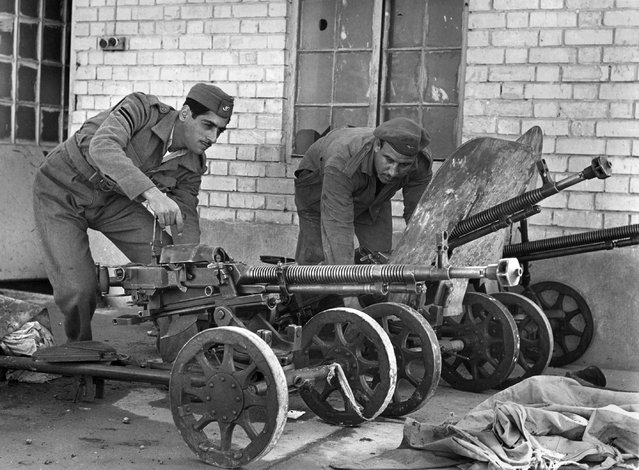 Guards of Iraq president Kassem remove from their posts in February 1963 in Baghdad after the successful coup led by the Arab Socialist Ba'ath Party (ASBP) during which president Kassem was murdered. (Photo by STF/AFP Photo/Getty Images) 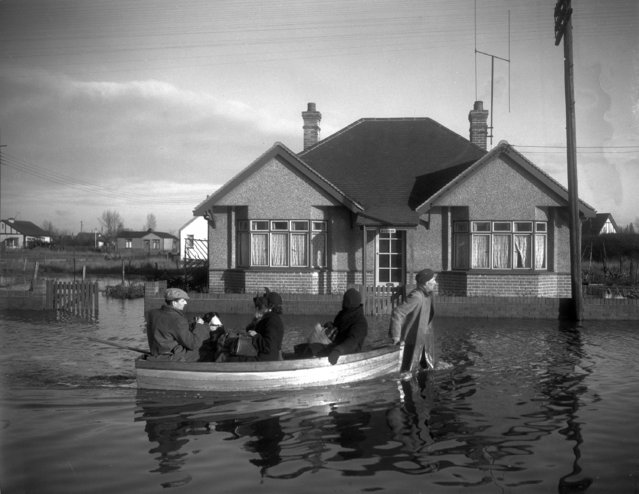 Inhabitants of flooded Canvey Island leave their homes in a small boat for a reception centre, February 2, 1953, after bad weather hit Britain's east coast. The area has been devasted, with 125 people drowned and 500 missing. (Photo by Robert Rider-Rider/AP Photo) 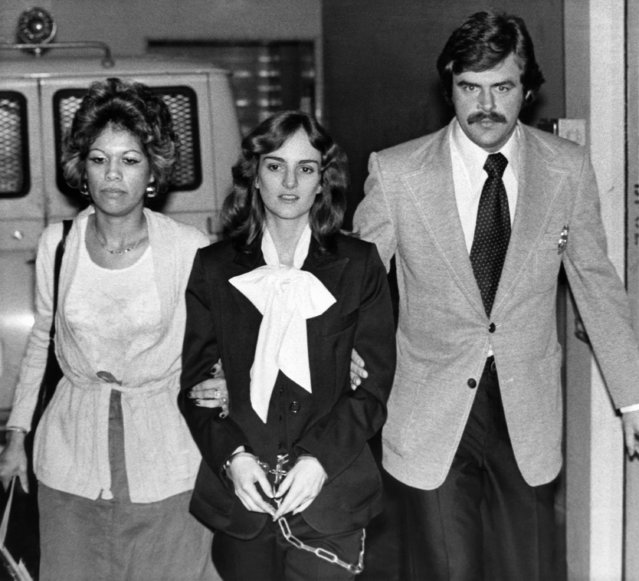 U.S. marshals escort Patricia Hearst from San Francisco's Federal Building in San Francisco, February 3, 1976, where jury selection continued in her bank robbery trial. The jury is expected to be seated on Tuesday, raising the possibility the first testimony would be hears on Wednesday – the second anniversary of Miss Hearst's kidnapping by the Symbionese Liberation Army. At left is Marshal Janey Jimenez, and at right is Marshal Mike Tarr. (Photo by AP Photo) 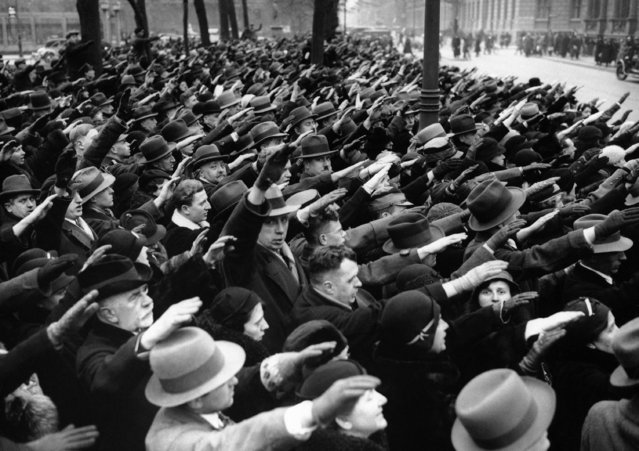 On occasion of the first anniversary of Adolf Hitler's government, an enormous crowd gathered in the Wilhelmstrasse and shouted to the chancellor in Berlin, Germany on February 9, 1934. (Photo by AP Photo) 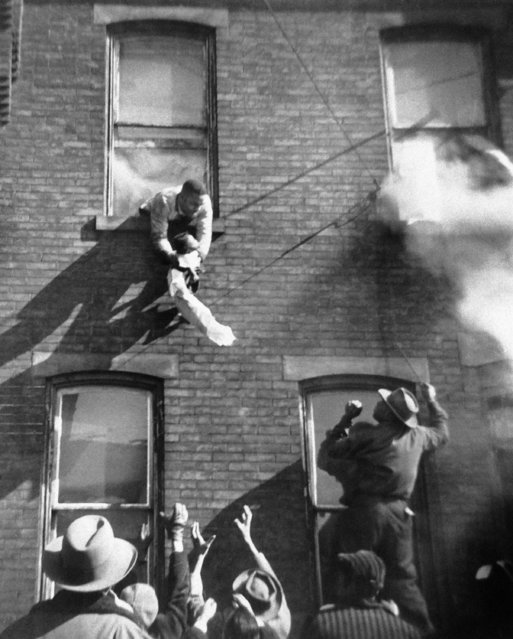 Four small children were saved from a burning home by Marvin Gilmore, 29, dropping the youngest, Belinda Woods, nine months old, to waiting spectators on the sidewalk below, in Camden, New Jersey on February 21, 1957. Gilmore escaped by climbing down electrician conduits on the front of the home. (Photo by AP Photo) 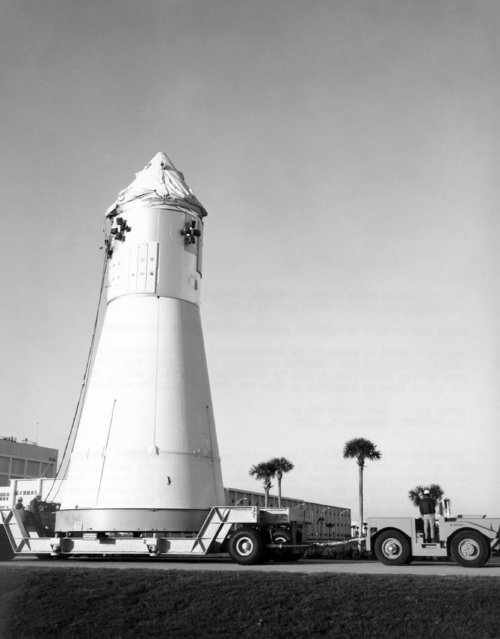 America's Apollo 1 spacecraft, perched atop a special truck at Cape Kennedy in Florida on January 6, 1966, moved to the launch pad as preparations moved ahead to launch the nation's first three-man astronaut crew into orbit about February 21. The Apollo 1 spaceship is to carry air force Lt. Cols. Virgil I. Grissom and Edward H. White II and Navy Lt. Cmdr. Roger B. Chaffee into Earth orbit to spend up to 14 days checking out spacecraft operations. (Photo by AP Photo) 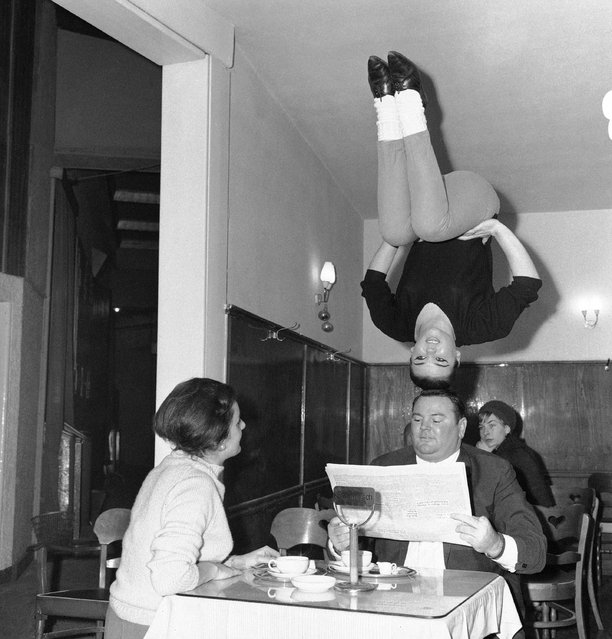 New program of Munich's Krone Circus performed by two American artists вЂњThe CarmenasвЂќ during a press conference in Munich, Germany on January 10, 1962, while sitting in a coffee-house. (Photo by Heinrich Sanden Sr./AP Photo) 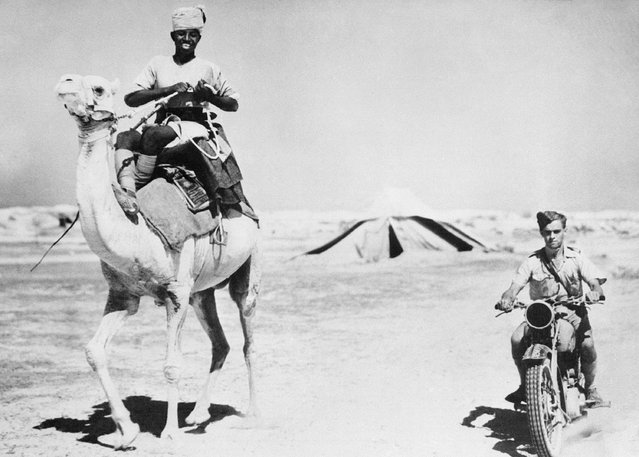 The racing camel of the Sudanese and the motorcycle of the R.A.F. rider present a contrast in civilizations in the battle zone of the Western Desert in North Africa, January 20, 1941. (Photo by AP Photo) 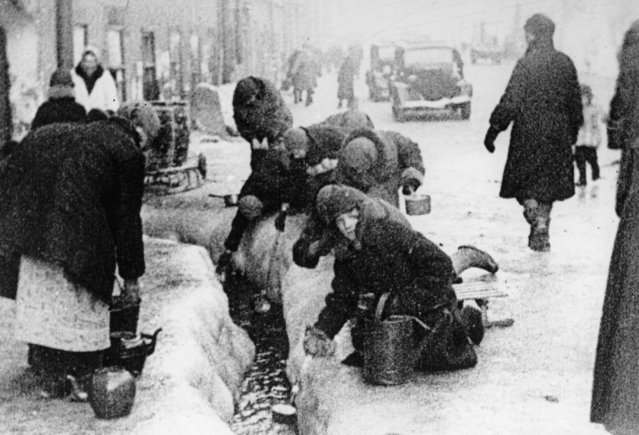 This photo, taken in the winter months of 1942, shows citizens of Leningrad as they dig up water from a broken main, during the 900-day siege of the Russian city by German invaders. (Photo by AP Photo) 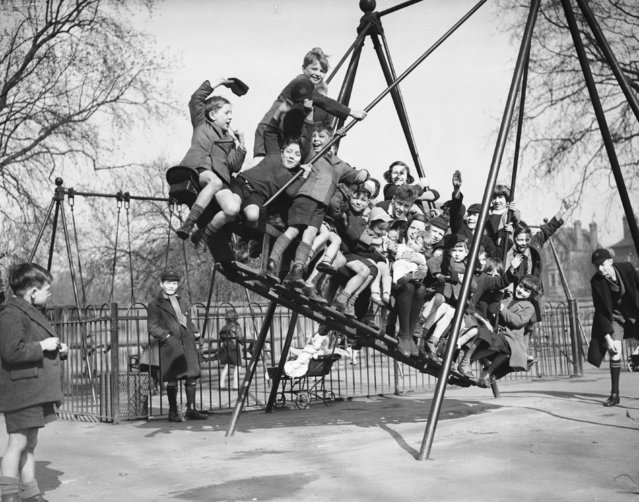 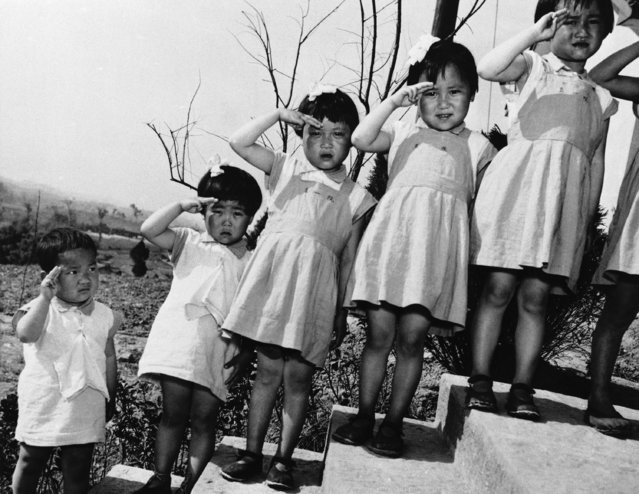 Raising their little hands in salute to Madame Chiang Kai-Shek, are these Chinese children, orphaned by the war in their native land. Madame Chiang visited the children at a War Orphans Home near Chungking in opening ceremonies on May 2, 1944. (Photo by AP Photo) 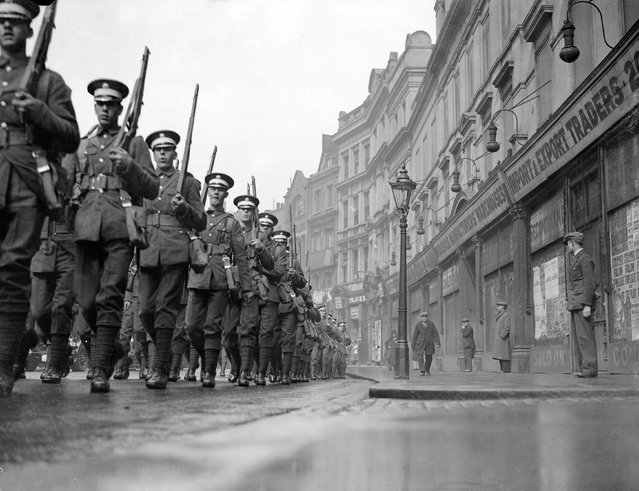 Coldstream Guards at Westminster in London on the way to General Headquarters at Pirbright in Surrey, 17th April 1931. (Photo by Fox Photos/Getty Images) 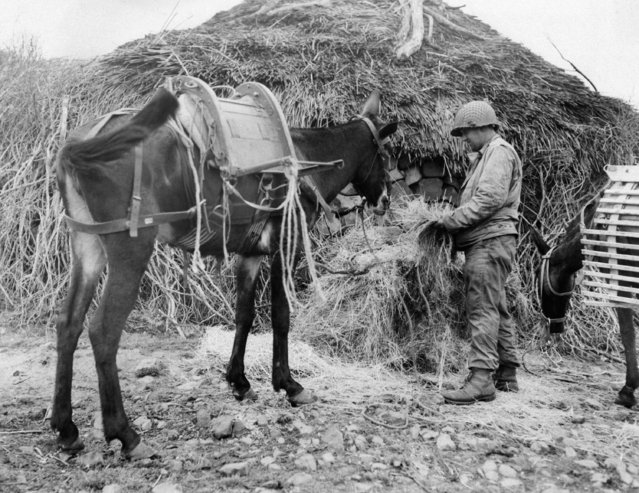 Pvt. John Perigein of Allentown, Pa., above sees that Herbert gets fed during a rest period for a mule pack train in Northern Tunisia May 14, 1943. Herbert and his kind are called “French Jeeps” by the yanks who used them to Haul Ammunition, food and supplies to the fronts over difficult county in the North African campaign. (Photo by AP Photo)
Edit Del
12 Jul 2018 00:05:00, post received 0 comments
Publication archive:
←   →
Popular tags:
All tags
Last searches: