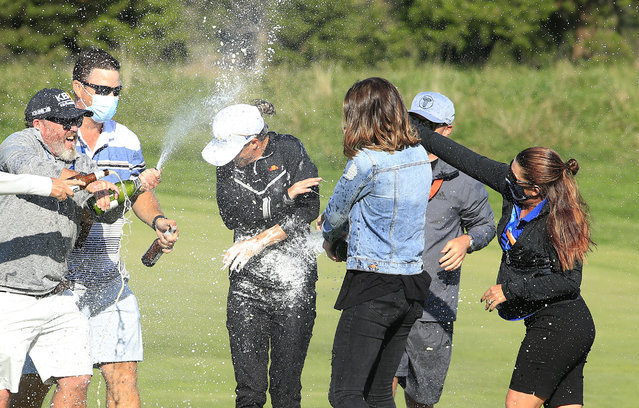 Mel Reid of England (C) is doused with champagne after winning the ShopRite LPGA Classic presented by Acer on the Bay Course at Seaview Hotel and Golf Club on October 04, 2020 in Galloway, New Jersey. (Photo by Michael Cohen/Getty Images) 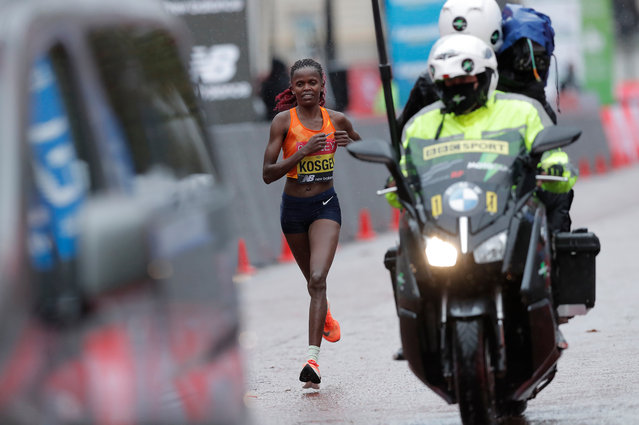 Brigid Kosgei of Kenya competes in the Elite Women's Field during the 2020 Virgin Money London Marathon around St. James's Park on October 04, 2020 in London, England. The 40th Race will take place on a closed-loop circuit around St James’s Park in central London. (Photo by Tom Jenkins/The Guardian) 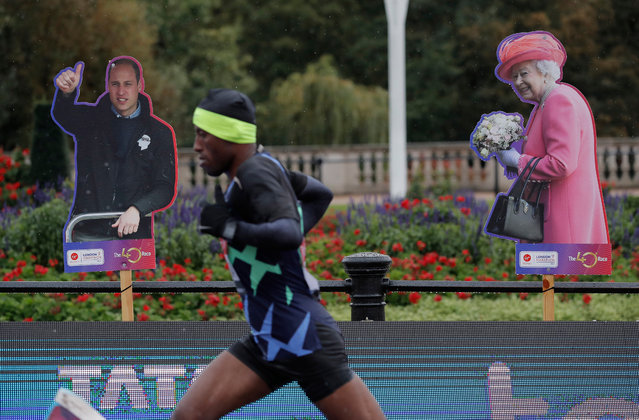 Shura Kitata of Ethiopia runs past cardboard cut-outs of the Duke of Cambridge and the Queen at the London Marathon in London, Britain, 04 October 2020. (Photo by Tom Jenkins/The Guardian) 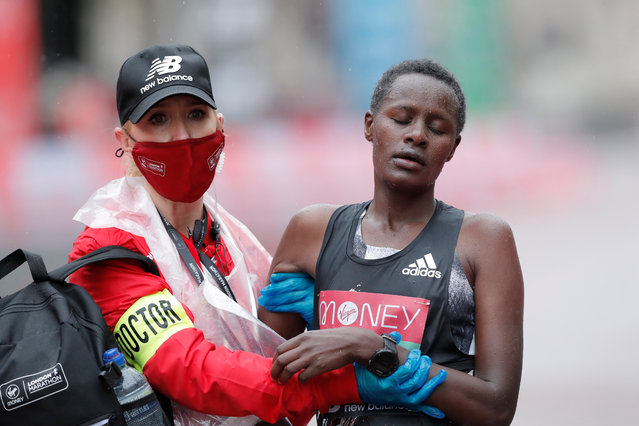 Edith Chelimo (R) of Kenya walks with a medical assistant after finishing the elite women's race during the London Marathon in London, Bri​tain, 04 October 2020. (Photo by Tom Jenkins/The Guardian) 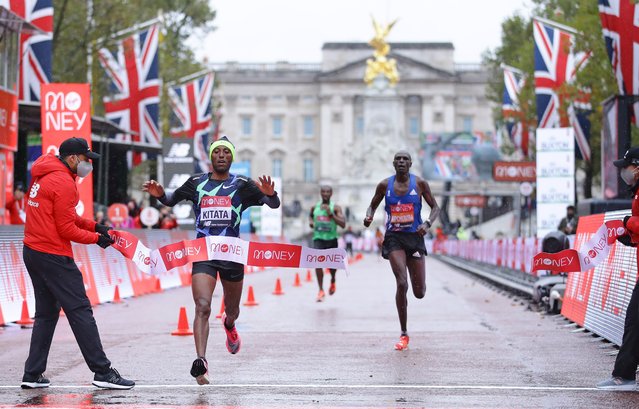 Ethiopia's Shura Kitata (2nd L) breaks the tape as he wins the elite men's race of the 2020 London Marathon in central London on October 4, 2020. This year's London marathon, an elite-athlete only event, takes place in a “secure biosphere” on a enclosed, looped course, in St James's Park, due to coronavirus restrictions. (Photo by Richard Heathcote/Pool via AFP Photo) 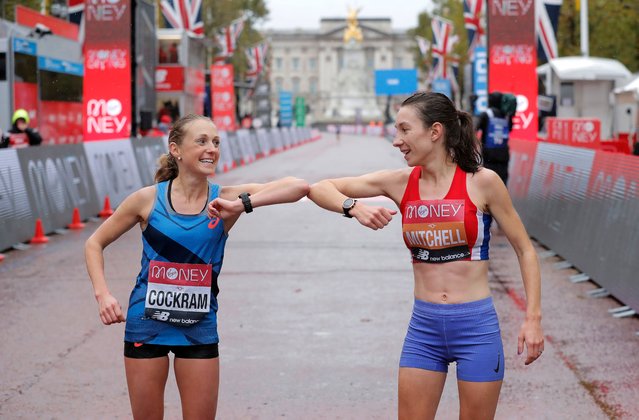 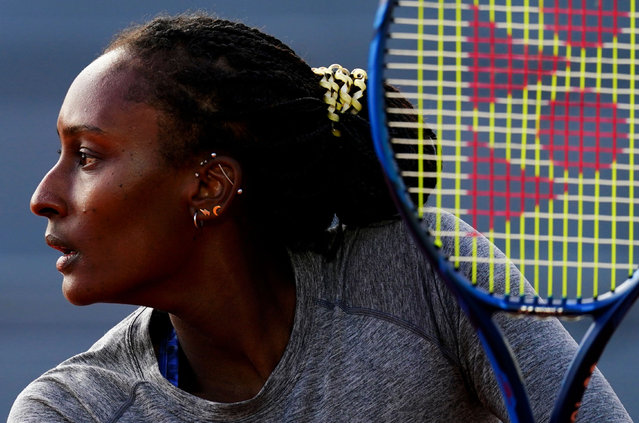 Tennis player Asia Muhammad of the USA during day eight of the French Open at Roland Garros in Paris, France on October 4, 2020. (Photo by Javier Garcia/BPI/Rex Features/Shutterstock) 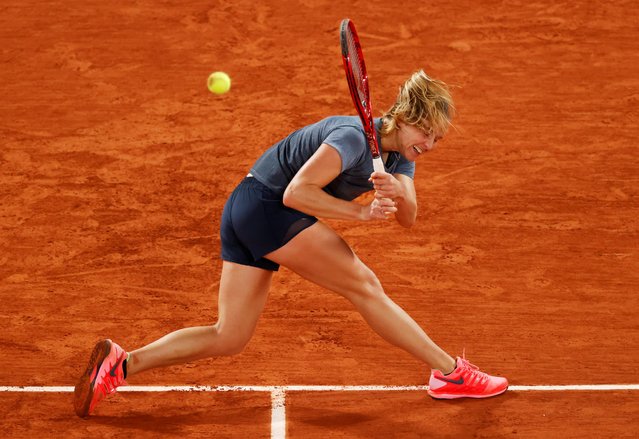 France's Fiona Ferro returns the ball to Sofia Kenin of the US during their women's singles fourth round tennis match on Day 9 of The Roland Garros 2020 French Open tennis tournament in Paris on October 5, 2020. (Photo by Christian Hartmann/Reuters) 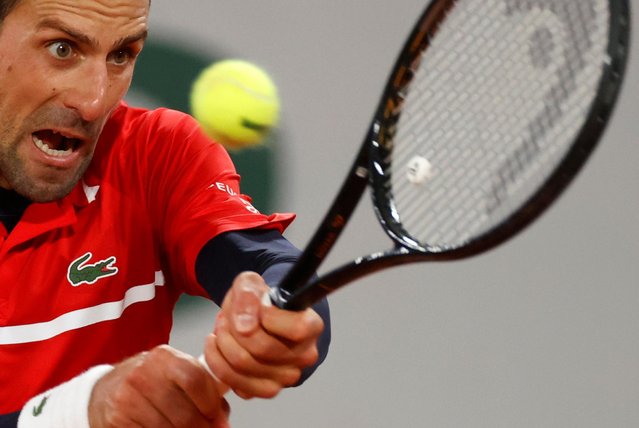 Serbia's Novak Djokovic in action during his fourth round match against Russia's Karen Khachanov at the French Open in Paris, France on October 5, 2020. (Photo by Christian Hartmann/Reuters) 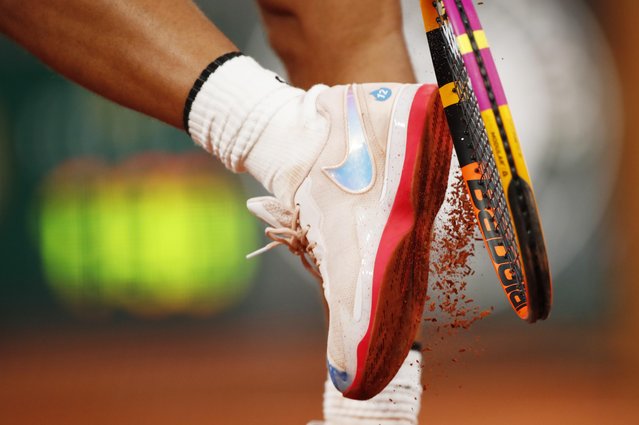 The number 12 is seen on the trainers belonging to Spain's Rafael Nadal during his first round match against Belarus' Egor Gerasimov at the French Open in Paris, France on September 28, 2020. (Photo by Gonzalo Fuentes/Reuters) 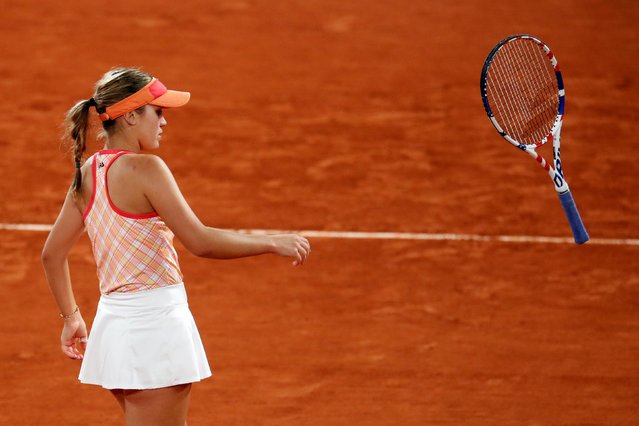 Sofia Kenin of the U.S. throws her racket after missing a return against France's Fiona Ferro in the fourth round match of the French Open tennis tournament at the Roland Garros stadium in Paris, France, Monday, October 5, 2020. (Photo by /Gonzalo Fuentes/Reuters) 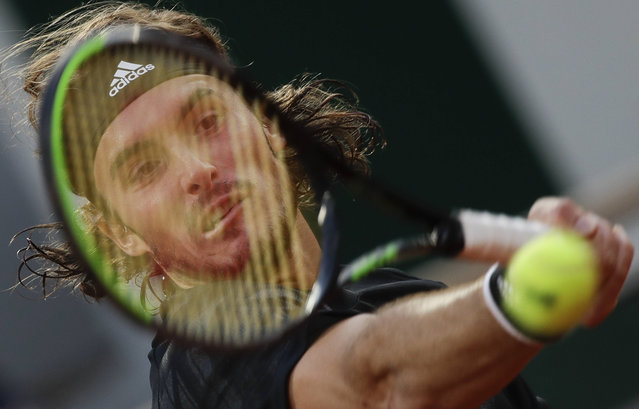 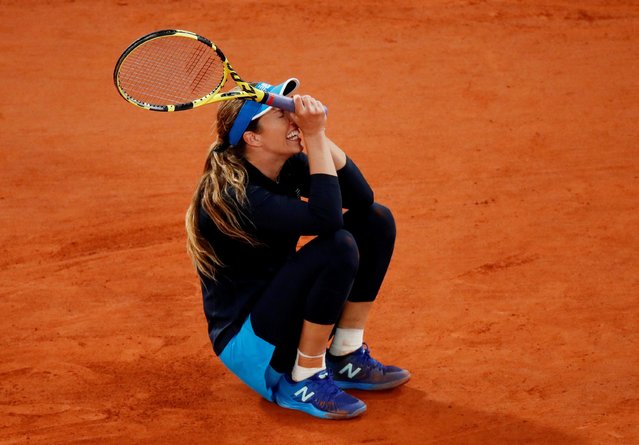 Danielle Collins of the United States celebrates after her victory against Ons Jabeur of Tunisia in the fourth round of the singles competition on Court Philippe-Chatrier during the French Open Tennis Tournament at Roland Garros on October 6th 2020 in Paris, France. (Photo by Gonzalo Fuentes/Reuters) 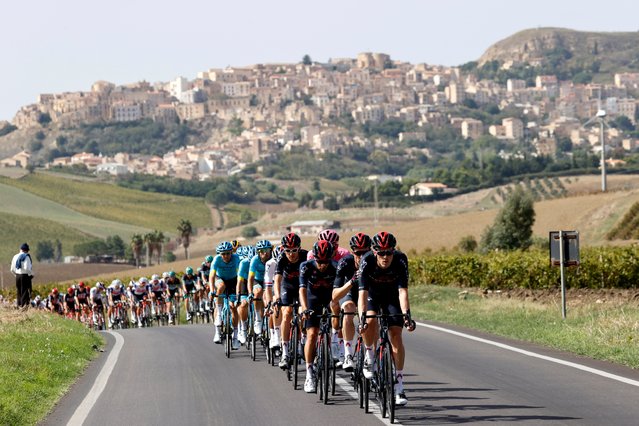 The peloton rides during the second stage of the 2020 Giro d'Italia, a 149 km route between Alcamo and Agrigento, in Agrigento on October 4, 2020. (Photo by Luca Bettini/AFP Photo) 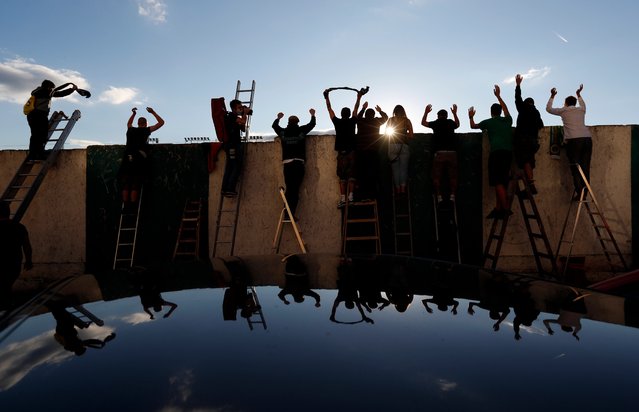 Fans, standing on ladders from behind the fence, celebrate a goal as they watch a Czech first division match between Bohemians Prague and Zlin in Prague, Czech Republic, Sunday, October 4, 2020. Amid restrictive measures that limit the number of soccer fans from attending the game, fans are looking for innovative ways to watch the match during the ongoing coronavirus pandemic. (Photo by Petr David Josek/AP Photo) 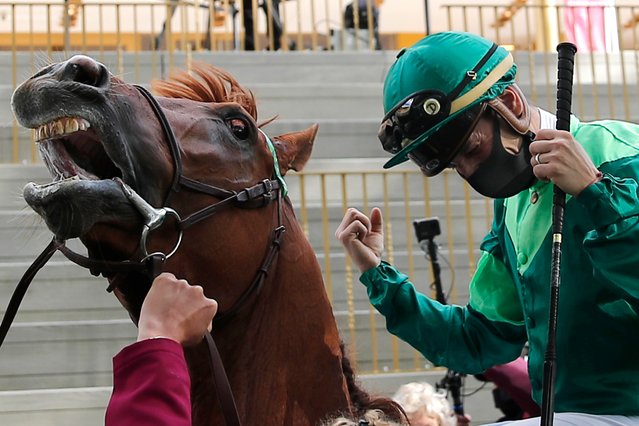 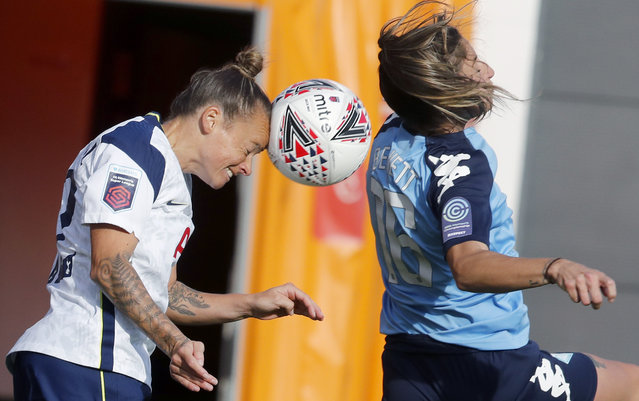 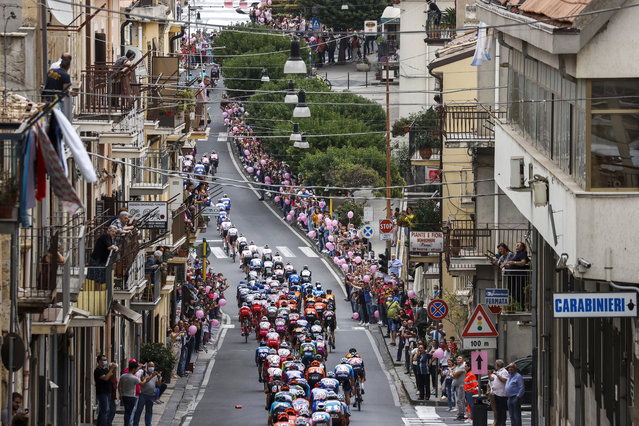 The pack rides through the town of Agira on October 5, 2020 during the 3rd stage of the Giro d'Italia 2020 cycling race, a 150-kilometer route between Enna and volcano Etna, Linguaglossa-Piano Provenzana, Sicily. (Photo by Luca Bettini/AFP Photo) 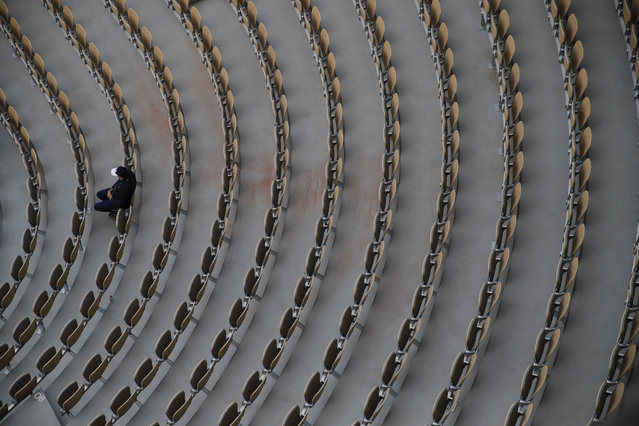 A lone spectator watches Sofia Kenin of the U.S. and Petra Kvitova of the Czech Republic in the semifinal match of the French Open tennis tournament at the Roland Garros stadium in Paris, France, Thursday, October 8, 2020. (Photo by Christophe Ena/AP Photo) 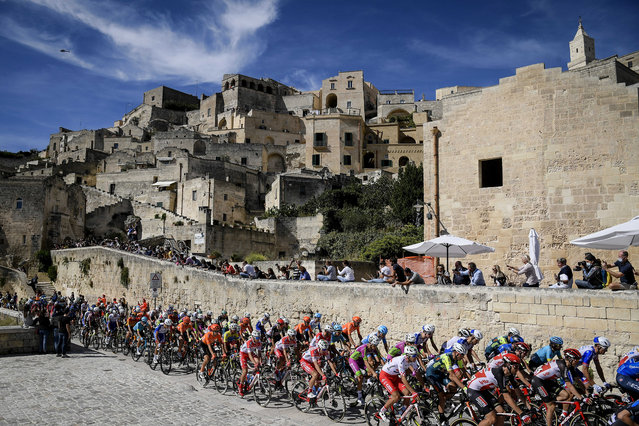 The pack of cyclists pedals past Matera at the start of the seventh stage of the Giro d'Italia cycling race, from Matera to Brindisi, southern Italy, Friday, October 9, 2020. (Photo by Fabio Ferrari/LaPresse via AP Photo) 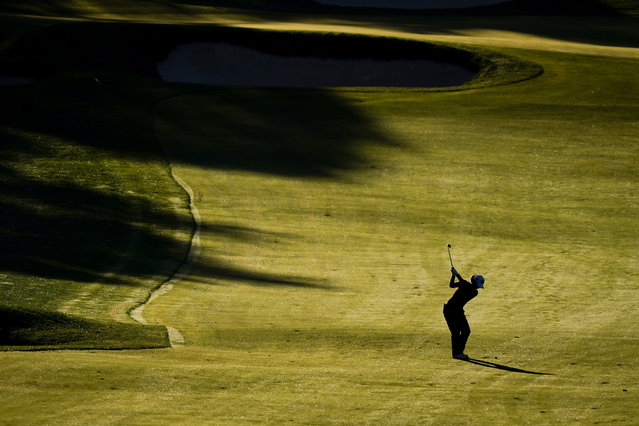 Charley Hull, of England, hits from the fairway on the 11th hole during the second round of the KPMG Women's PGA Championship golf tournament at the Aronimink Golf Club, Friday, October 9, 2020, in Newtown Square, Pa. (Photo by Matt Slocum/AP Photo) 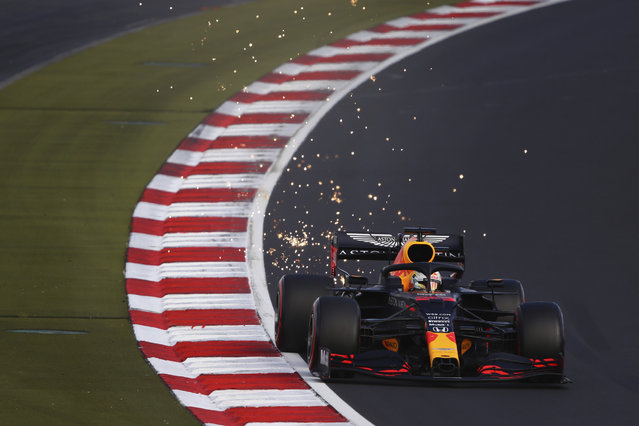