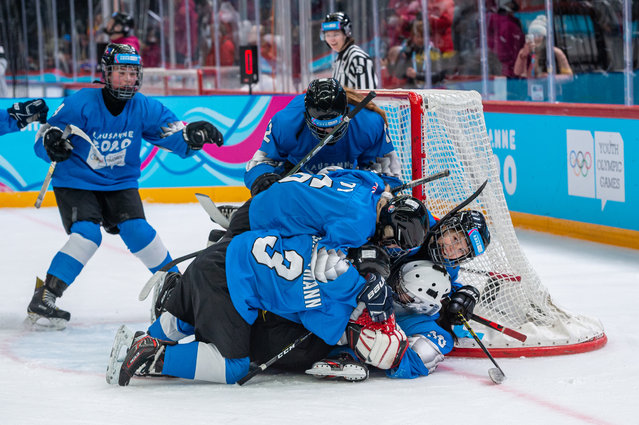 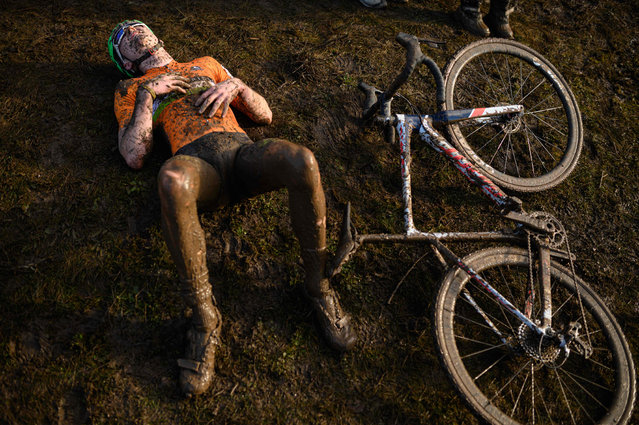 A rider recovers after competing in the Junior Men race of the British Cycling National Cyclo-Cross Championships at Shrewsbury Sports Village on January 12, 2020 in Shrewsbury, Central England. (Photo by Oli Scarff/AFP Photo) 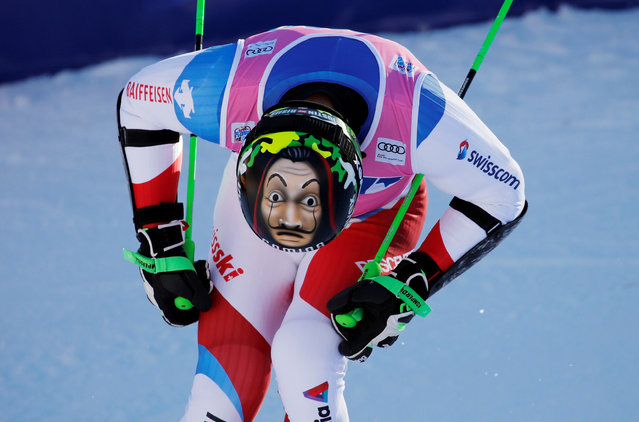 Switzerland's Justin Murisier competes in the second run of the Men's giant slalom race at the FIS Alpine Skiing World Cup in Adelboden, Switzerland on January 11, 2020. (Photo by Stefan Wermuth/Reuters) 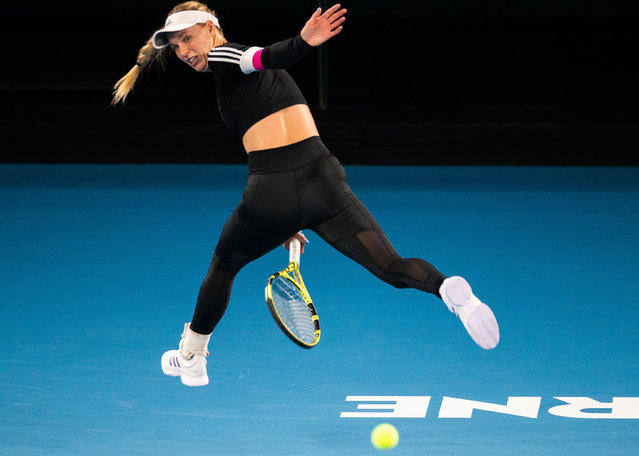 Caroline Wozniacki of Denmark attends a practice session in Melbourne on January 16, 2020, ahead of the Australian Open tennis tournament. (Photo by Asanka Brendon Ratnayake/AFP Photo) 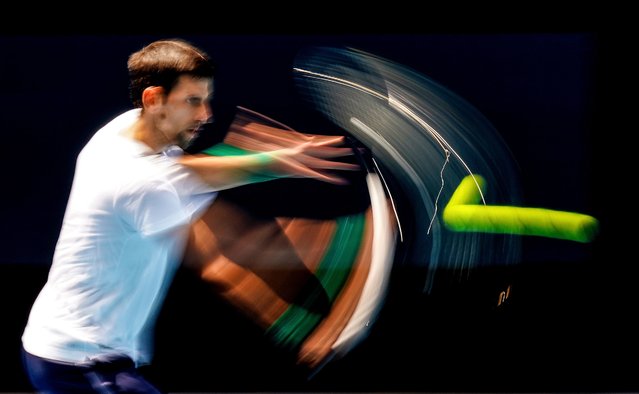 A picture made with a slow shutter speed shows Novak Djokovic of Serbia in action during an Australian Open practice session at Melbourne Park in Melbourne, Australia, 16 January 2020. (Photo by Scott Barbour/EPA/EFE) 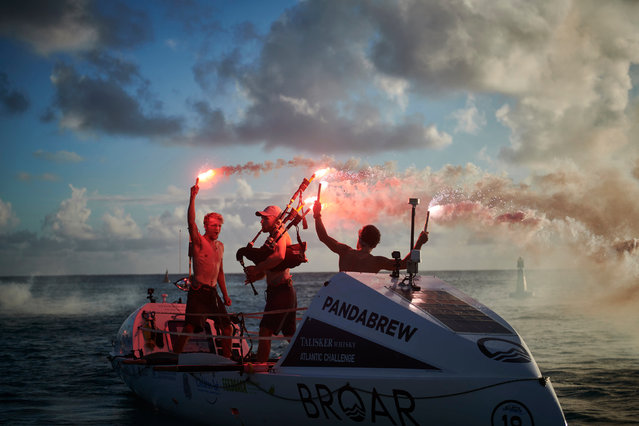 (L-R) Lachlan, Jamie, and Ewan celebrate their arrival in Antigua on January 17, 2020. Brothers Jamie,26, Ewan, 27, and Lachlan, 21, MacLean have become the fastest and youngest trio to row across the Atlantic – from La Gomera in Spain to Antigua in the Caribbean in just 35 days nine hours and nine minutes – being the previous record by six days. (Photo by Ben Duffy Photography/PA Wire Press Association) 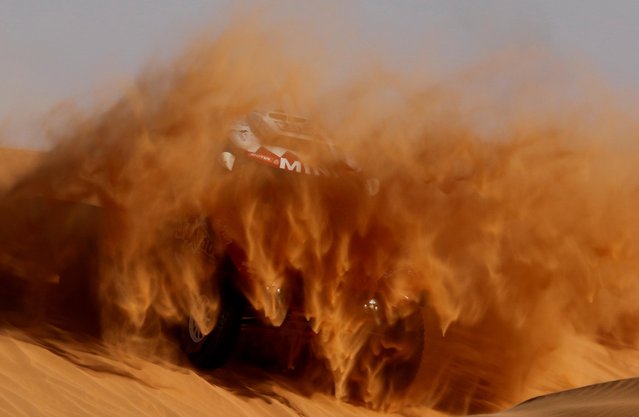 Bahrain JCW X-Raid Team's Stephane Peterhansel and Paulo Fiuza during stage 7 of the Dakar Rally in Saudi Arabia on January 12, 2020. (Photo by Hamad I Mohammed/Reuters) 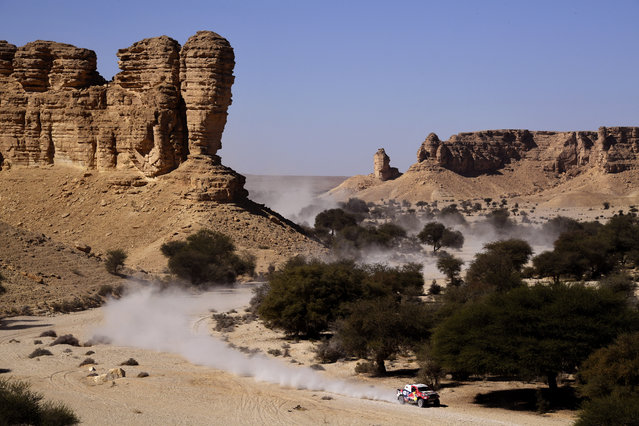 Toyota's driver Giniel De Villiers of South Africa and his co-driver Alex Bravo Haro of Spain compete during the Stage 9 of the Dakar 2020 between Wadi Al Dawasir and Haradh, Saudi Arabia, on January 14, 2020. (Photo by Franck Fife/AFP Photo) 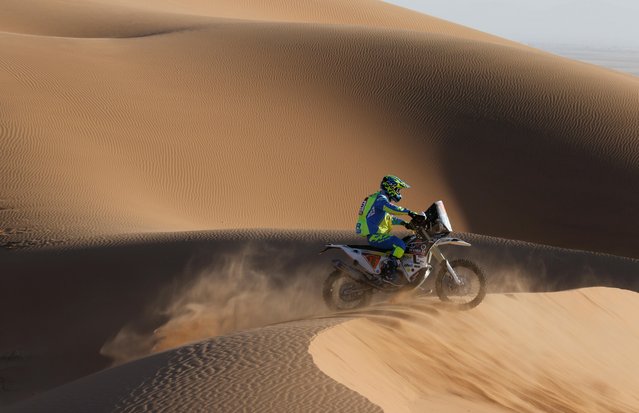 General view of a motorbike during stage 7, Riyadh to Wadi Al Dawasir in Riyadh, Saudi Arabia on January 12, 2020. (Photo by Hamad I Mohammed/Reuters) 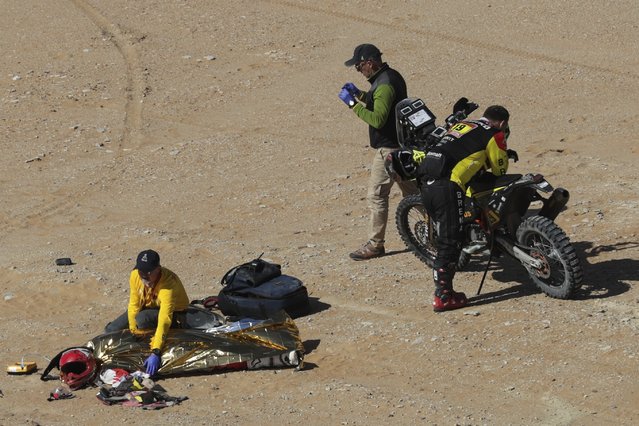 The body of Paulo Gonçalves of Portugal is covered with a blanket after a deadly fall during stage seven of the Dakar Rally between Riyadh and Wadi Al Dawasir, Saudi Arabia, Sunday, January 12, 2020. Gonçalves, 40, died after an accident with his Hero motorbike. (Photo by Bernat Armangue/AP Photo) 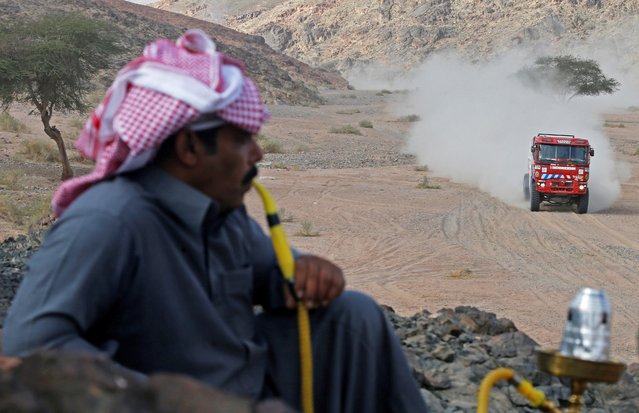 A spectator looks on during stage 4 Dakar Rally in Neom, Saudi Arabia on January 8, 2020. (Photo by Hamad I Mohammed/Reuters) 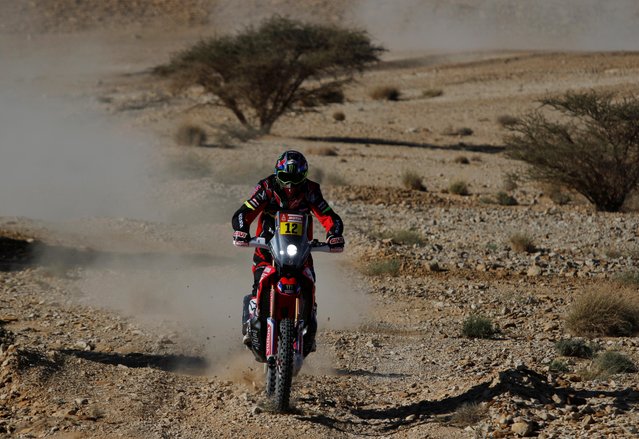 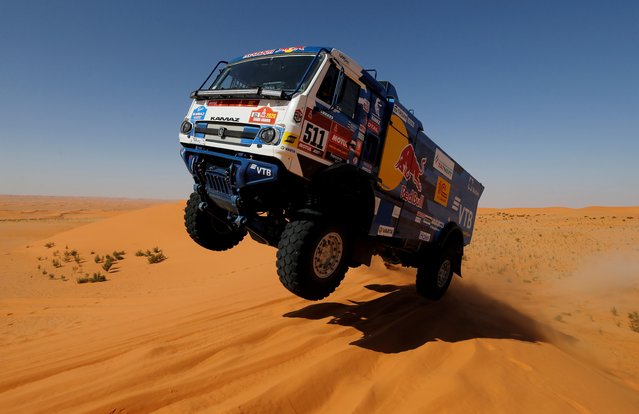 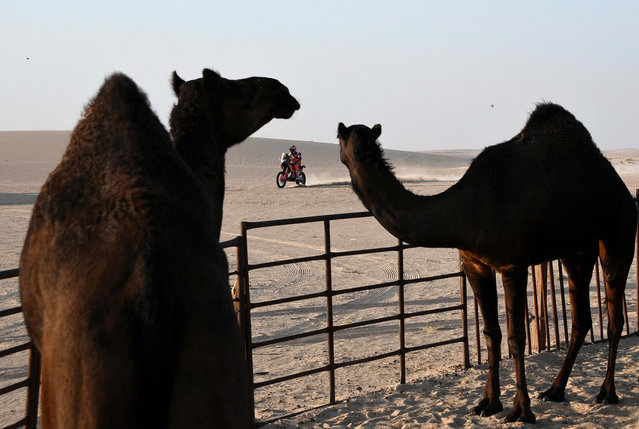 A biker rides past camels as he competes during the Stage 10 of the Dakar 2020 between Haradh and Shubaytah, Saudi Arabia, on January 15, 2020. (Photo by Franck Fife/AFP Photo) 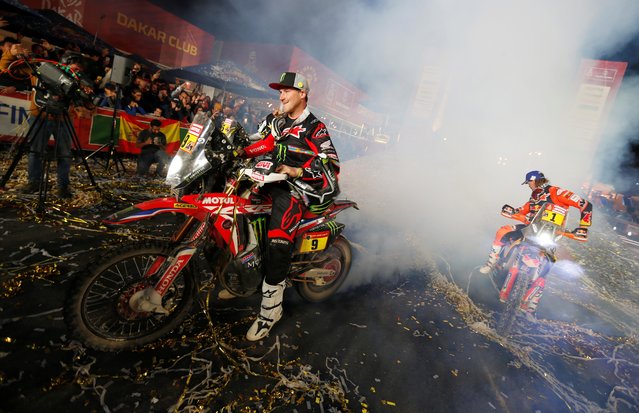 Monster Energy Honda Team 2020'S Ricky Brabec celebrates after winning the bike race of the Dakar Rally in Saudi Arabia on January 17, 2020. Brabec is the first American to win the Dakar on two wheels since the gruelling endurance event started in 1979. Brabec had started four previous Dakars but this race was only his second finish. (Photo by Hamad I Mohammed/Reuters) 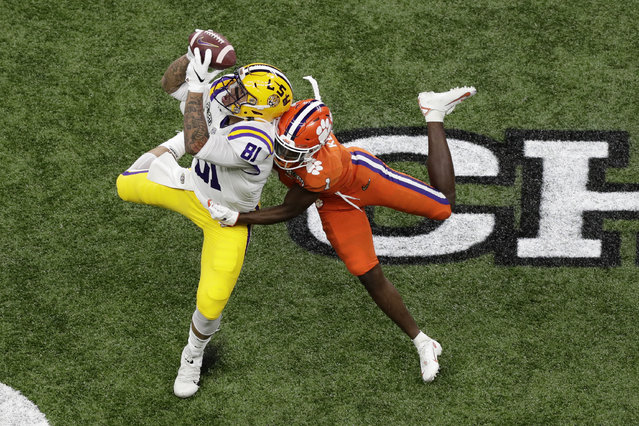 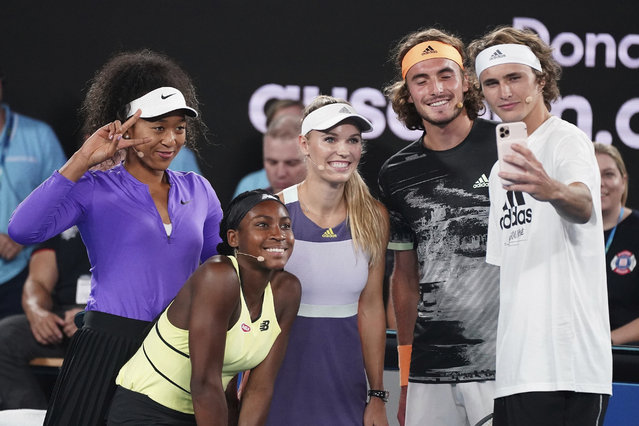 From left, Naomi Osaka of Japan, Coco Gauff of the United States, Caroline Wozniacki of Denmark, Stefanos Tsitsipas of Greece, and Alexander Zverev of Germany pose for a selfie during the Rally For Relief at Rod Laver Arena in Melbourne, Wednesday, January 15, 2020. Tennis stars have come together for the Rally for Relief to raise money in aid of the bushfire relief efforts across Australia. (Photo by Scott Barbour/AAP Image via AP Photo) 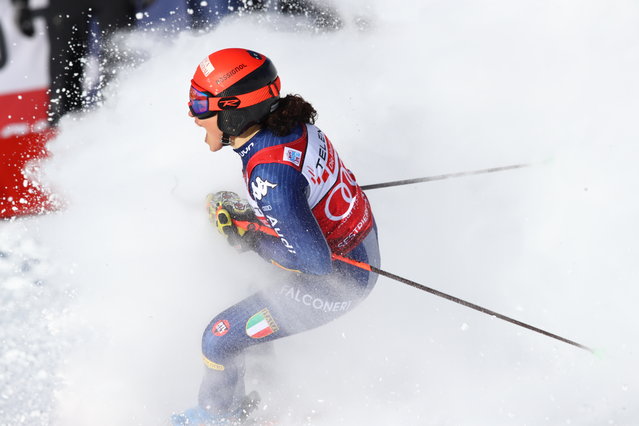 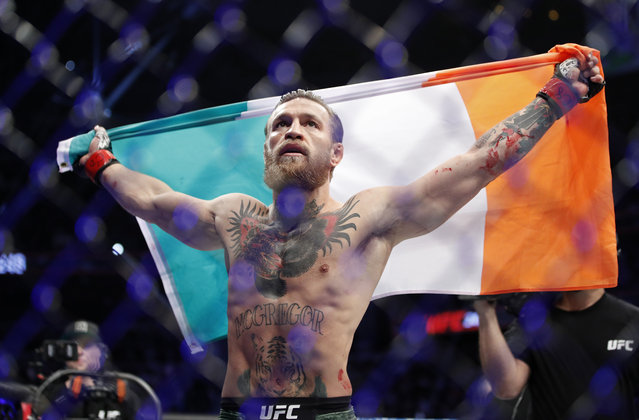 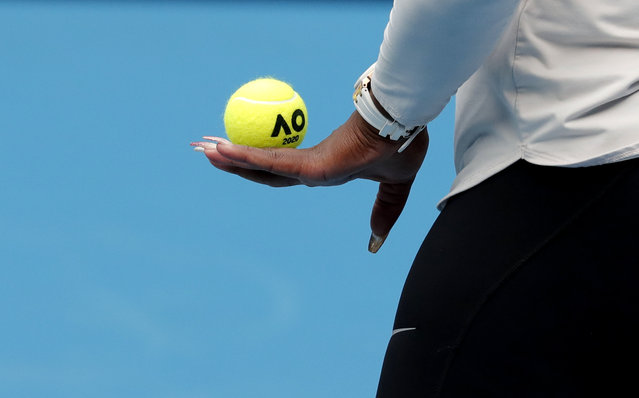 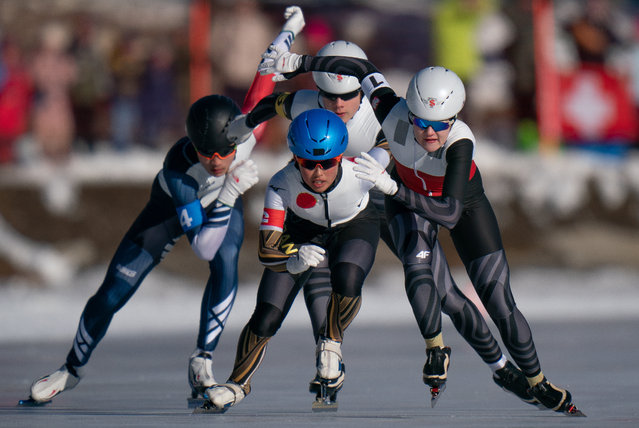 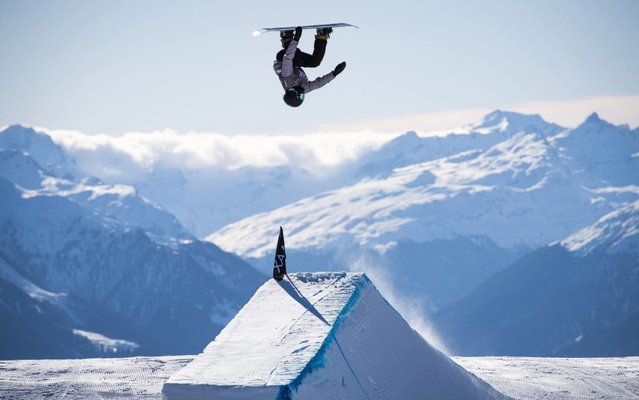 Julia Marino of USA in action during the final run of the snowboard slopestyle competition at the Laax Open, in Laax, Switzerland, 17 January 2020. (Photo by Gian Ehrenzeller/EPA/EFE/Rex Features/Shutterstock) 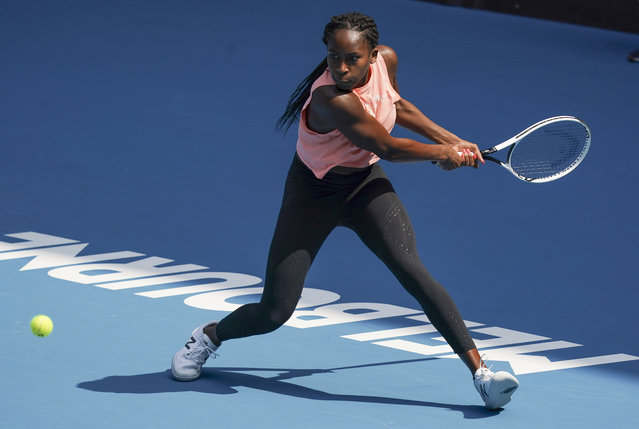 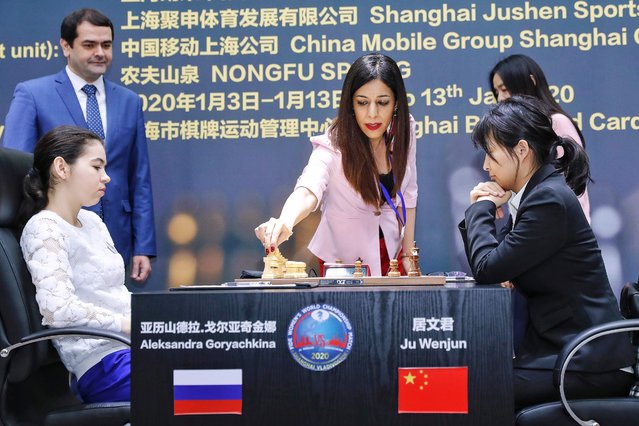 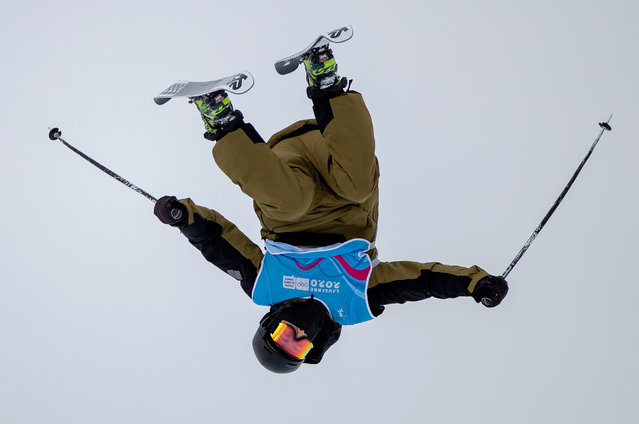