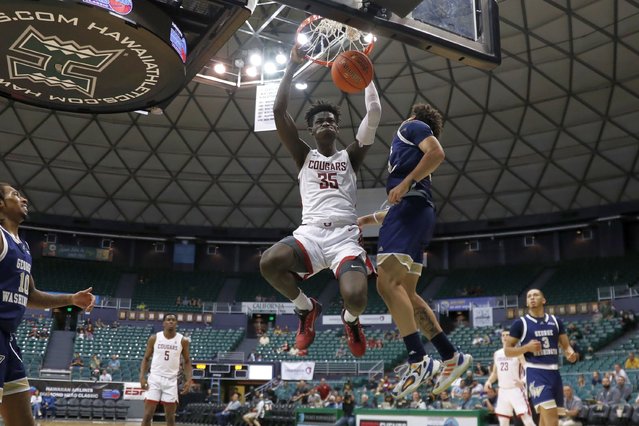 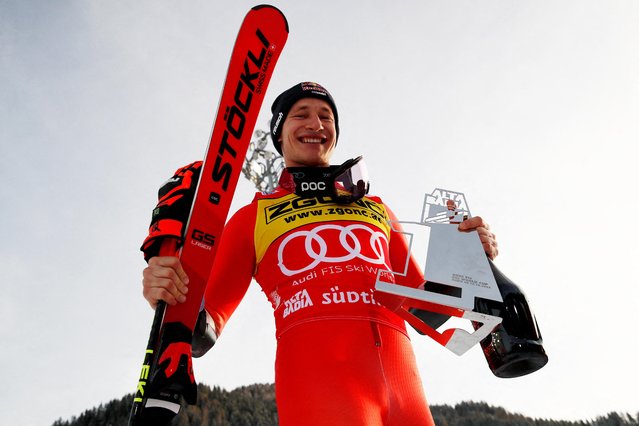 Winner Switzerland's Marco Odermatt celebrates on the podium after the second run of the Men's Giant Slalom event during the FIS Alpine ski World Cup in Alta Badia, on December 19, 2022. (Photo by Alessandro Garofalo/Reuters) 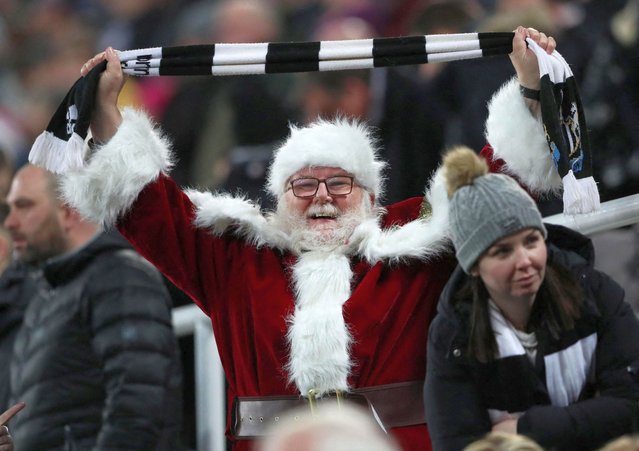 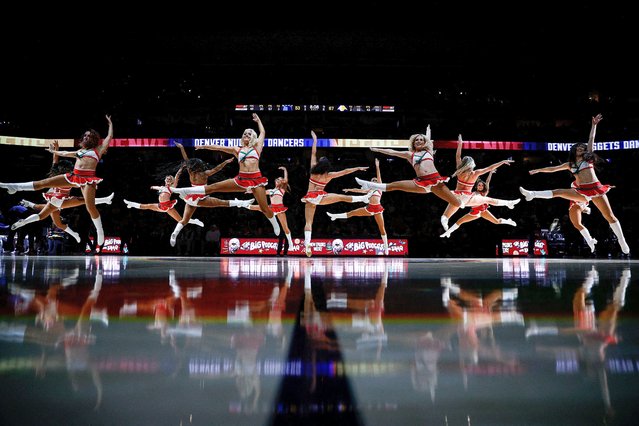 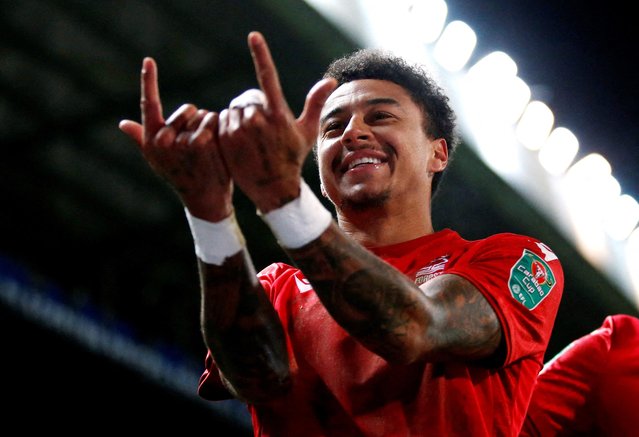 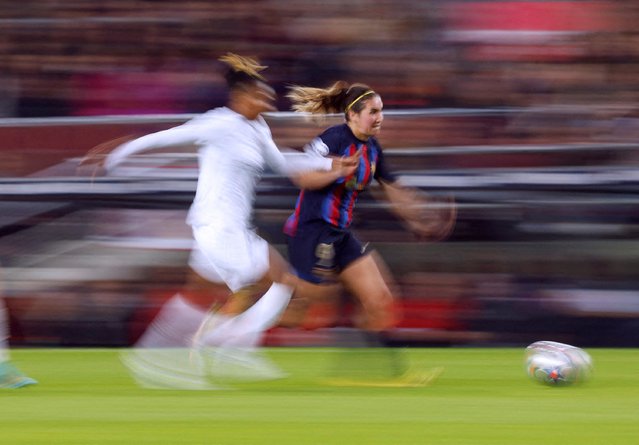 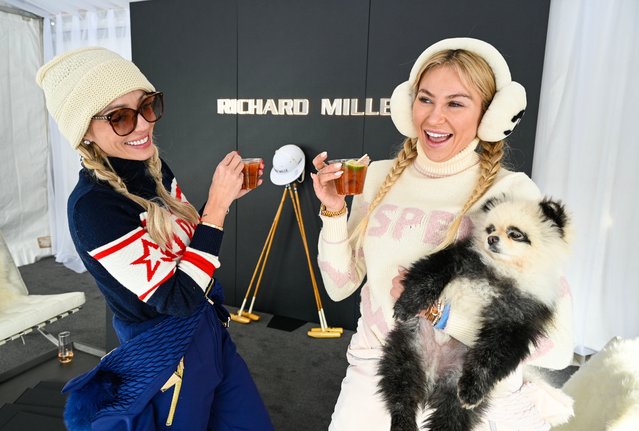 A view of the Richard Mille tent is seen during the 2022 Aspen World Snow Polo Championship at the Rio Grande Park on December 21, 2022 in Aspen, Colorado. (Photo by Riccardo Savi/Getty Images For Richard Mille) 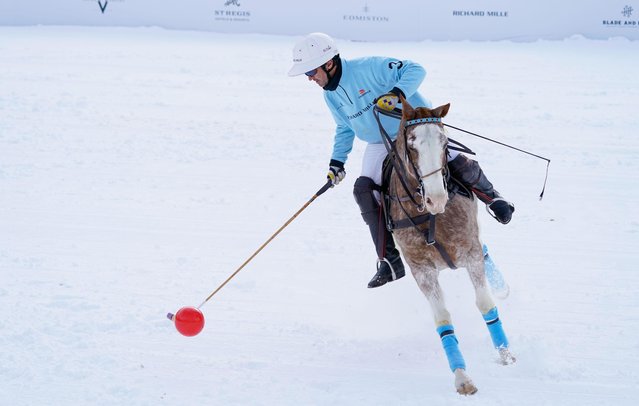 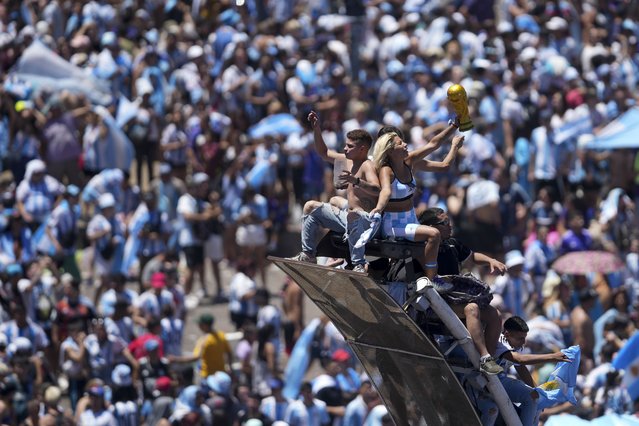 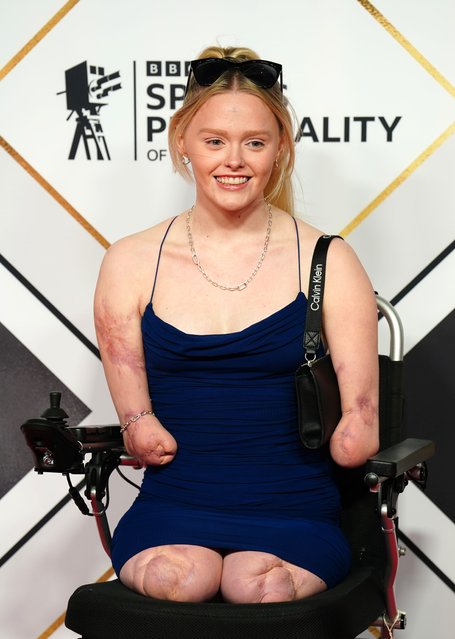 British Paralympic swimmer Ellie Challis poses on the red carpet prior to the BBC Sports Personality of the Year Awards 2022 held at MediaCityUK, Salford on Wednesday, December 21, 2022. (Photo by David Davies/PA Images via Getty Images) 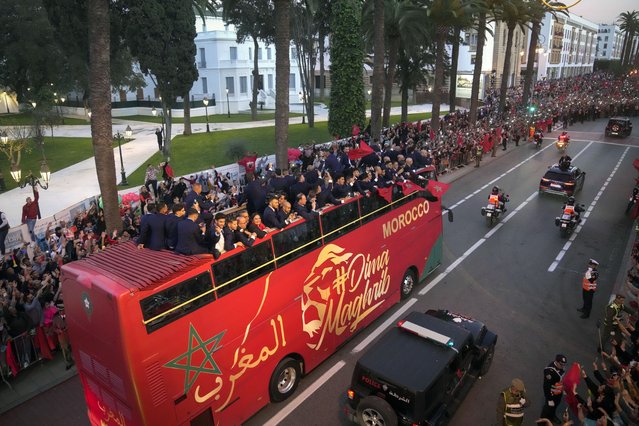 The players of Morocco national soccer team celebrate on a bus and wave during a homecoming parade in central Rabat, Morocco, Tuesday, December 20, 2022. Morocco national team won the fourth place at the last World Cup. (Photo by Mosa'ab Elshamy/AP Photo) 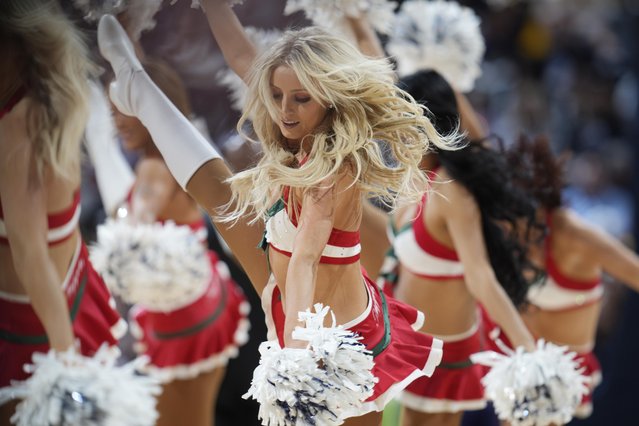 Denver Nuggets dance team performs in the first half of an NBA basketball game against the Charlotte Hornets Sunday, December 18, 2022, in Denver. (Photo by David Zalubowski/AP Photo) 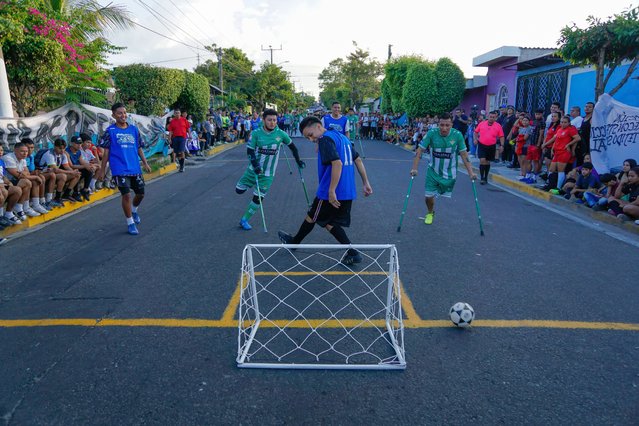 Salvadoran youth from an amputee soccer team participate in soccer matches within the framework of the Street Soccer Champion of Champions final in a community in the city of Soyapango, in San Salvador, El Salvador on December 19, 2022. Due to the existence of gangs in cities and neighborhoods, this sport keeps young people from engaging in violence and crime. It is part of the activities of Phase 2 of the Territorial Control Plan announced by the Salvadoran President Nayib Bukele, which is intended to keep young people away from gang violence through recreational activities, and is organized by the United Nations High Commissioner for Refugees (UNHCR), the Directorate for the Reconstruction of the Social Fabric of El Salvador. (Photo by Alex Pena/Anadolu Agency via Getty Images) 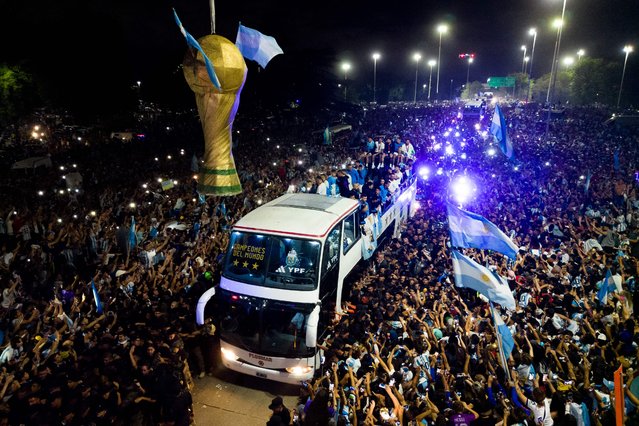 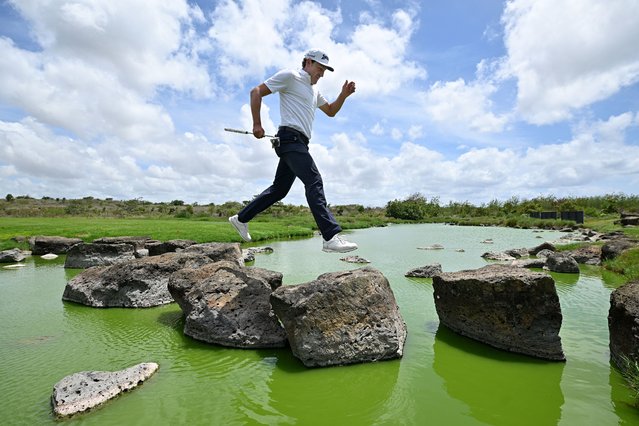 Alfredo Garcia-Heredia of Spain crosses the water on the 7th hole on Day Four of the AfrAsia Bank Mauritius Open at Mont Choisy Le Golf on December 18, 2022 in Port Louis, Mauritius. (Photo by Stuart Franklin/Getty Images) 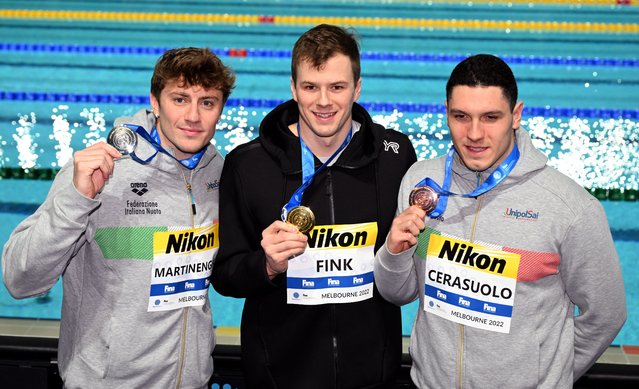 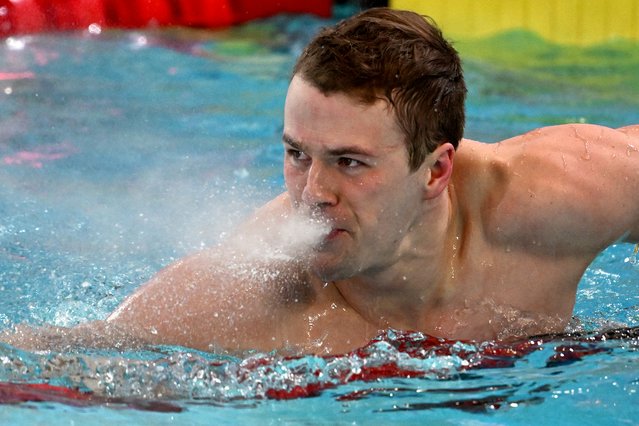 Nic Fink of the US celebrates winning the Men's 50m Breaststroke final at the FINA World Swimming Championships (25m) 2022 in Melbourne on December 18, 2022. (Photo by William West/AFP Photo) 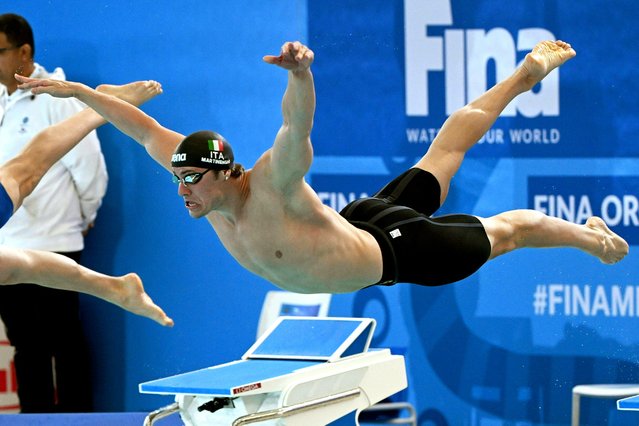 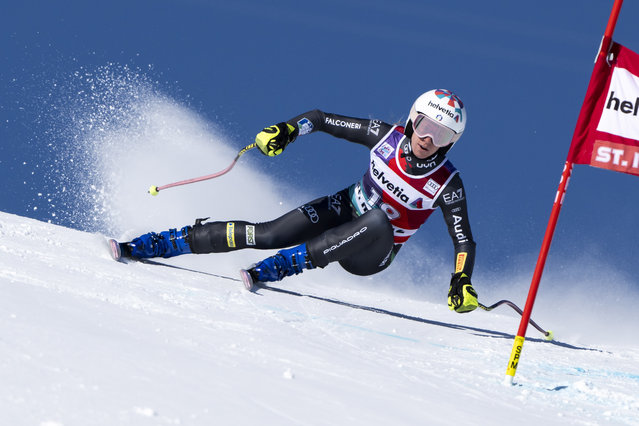 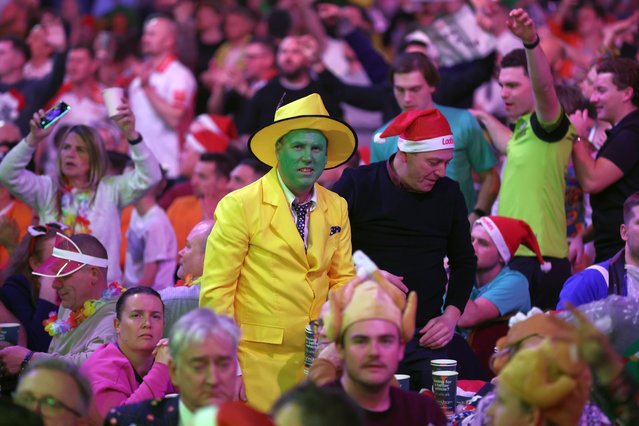