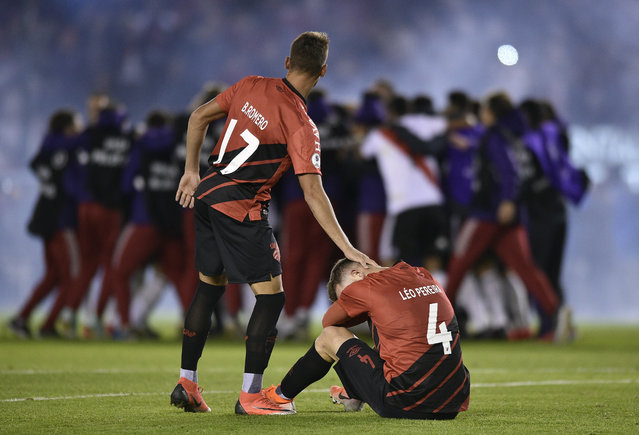 Leo Pereira of Brazil's Athletico Paranaense sits on the field as teammate Braian Romero pats him on the head after they lost the Recopa Sudamericana final soccer match 3-0 to Argentina's River Plate, celebrating behind, in Buenos Aires, Argentina, Thursday, May 30, 2019. (Photo by Gustavo Garello/AP Photo) 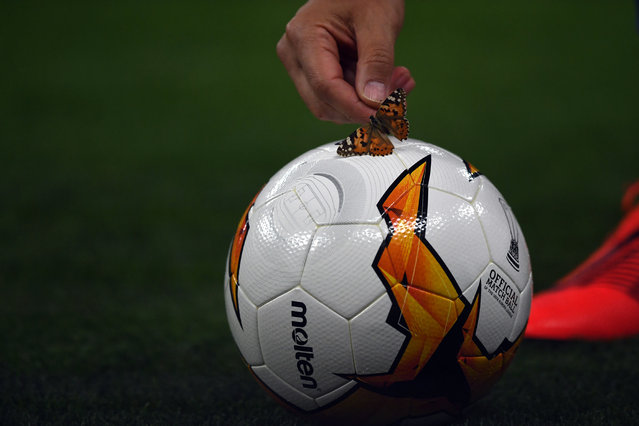 A Chelsea's assistant coach picks up a butterfly from a football during a training session at the Baku Olympic Stadium in Baku on May 28, 2019 on the eve of the UEFA Europa League final football match between Chelsea and Arsenal. (Photo by Ozan Kose/AFP Photo) 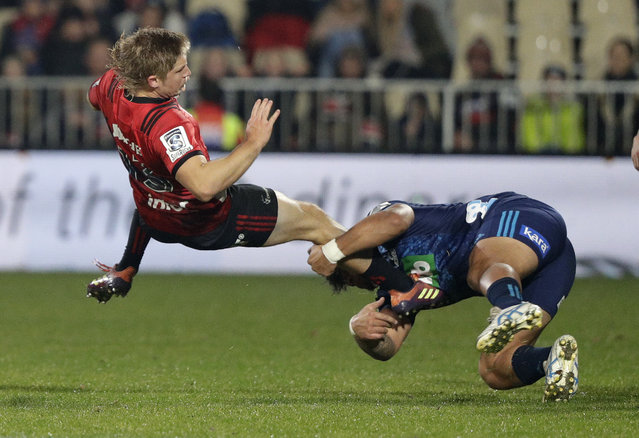 Crusaders Jack Goodhue, left, is airborne as he is tackled by Blues Levi Aumua during their Super Rugby match in Christchurch, New Zealand, Saturday, May 25, 2019. (Photo by Mark Baker/AP Photo) 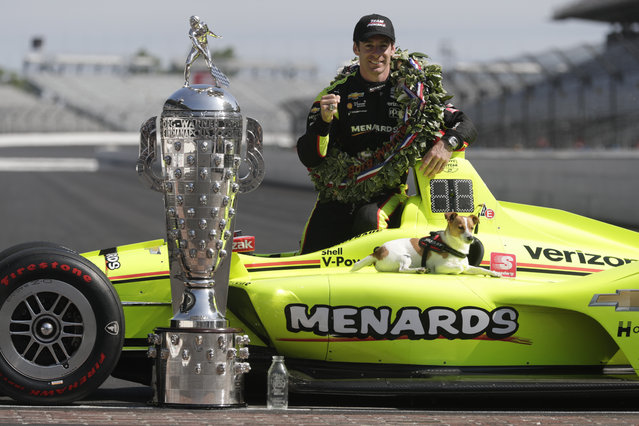 Simon Pagenaud, of France, winner of the 2019 Indianapolis 500 auto race, poses with his dog Norman during the traditional winners photo session at the Indianapolis Motor Speedway in Indianapolis, Monday, May 27, 2019. (Photo by Michael Conroy/AP Photo) 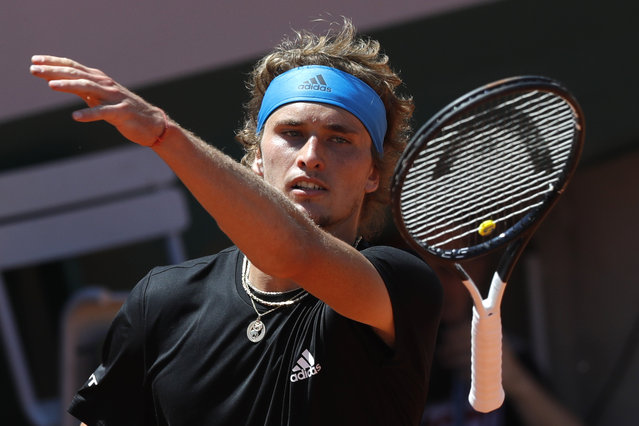 Germany's Alexander Zverev throws his racket after missing a shot against Serbia's Dusan Lajovic during their third round match of the French Open tennis tournament at the Roland Garros stadium in Paris, Saturday, June 1, 2019. (Photo by Pavel Golovkin/AP Photo) 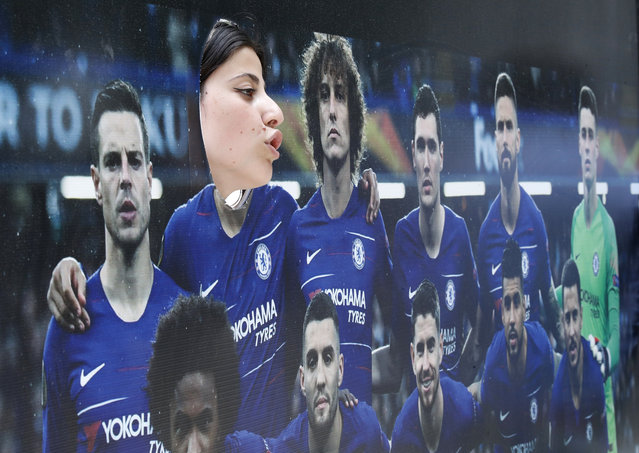 A woman poses with a poster of the Chelsea team in a fan zone on the eve of the Europa League final soccer match between Arsenal and Chelsea in Baku, Azerbaijan, Tuesday, May 28, 2019. (Photo by Dmitri Lovetsky/AP Photo) 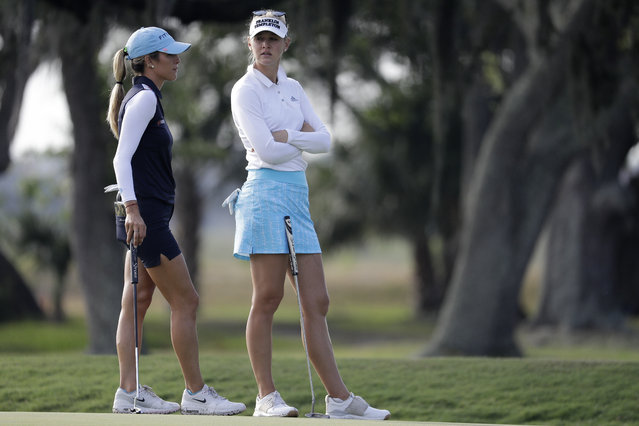 Jessica Korda, right, speaks with Jaye Marie Green on the 15th hole during the second round of the U.S. Women's Open golf tournament, Friday, May 31, 2019, in Charleston, S.C. (Photo by Steve Helber/AP Photo) 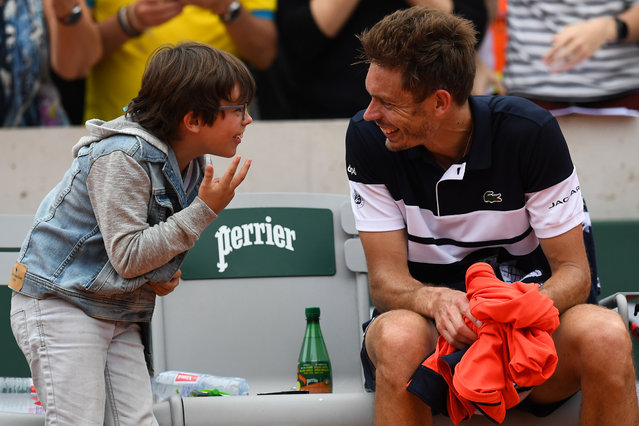 France's Nicolas Mahut celebrates with his son after winning against Italy's Marco Cecchinato during their men's singles first round match on day 1 of The Roland Garros 2019 French Open tennis tournament in Paris on May 26, 2019. (Photo by Christophe Archambault/AFP Photo) 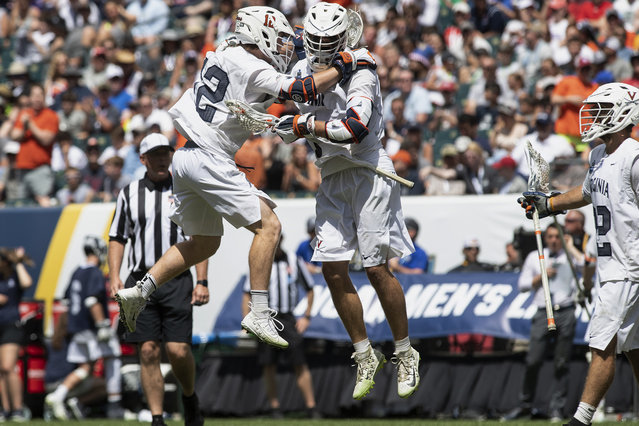 Virginia's Jack Simmons (12) congratulates Matt Moore after scoring in the fourth quarter of a game against Yale in the NCAA college lacrosse championship in Philadelphia on Monday, May 27, 2019. Virginia beat defending champion Yale, 13-9, in the national title game Monday. (Photo by Jose F. Moreno/The Philadelphia Inquirer via AP Photo) 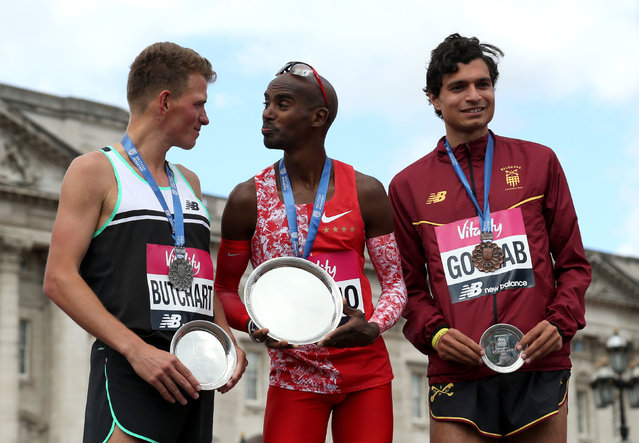 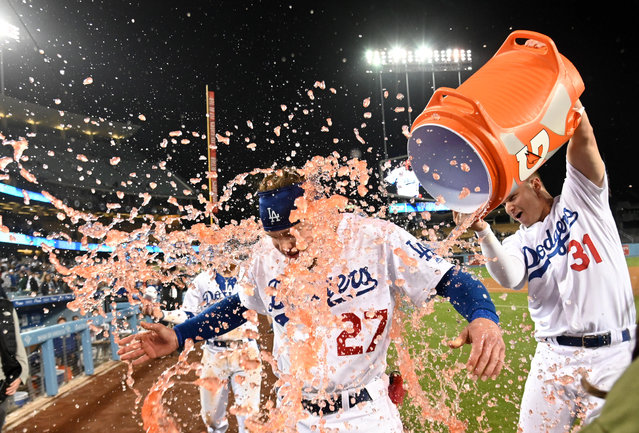 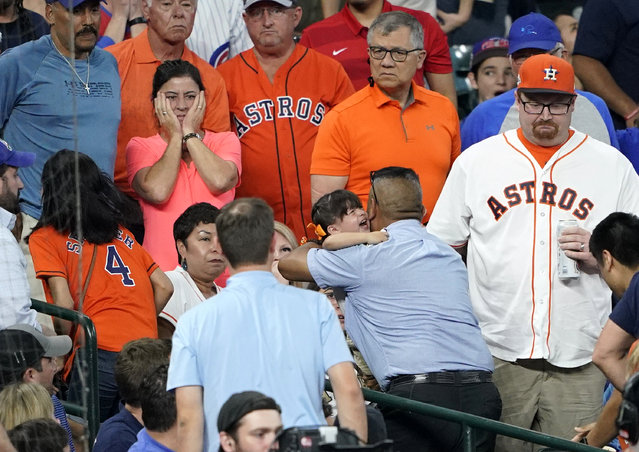 A young child is carried from the stands after being injured by a foul ball off the bat of Chicago Cubs' Albert Almora Jr. during the fourth inning of a baseball game against the Houston Astros Wednesday, May 29, 2019, in Houston. (Photo by David J. Phillip/AP Photo) 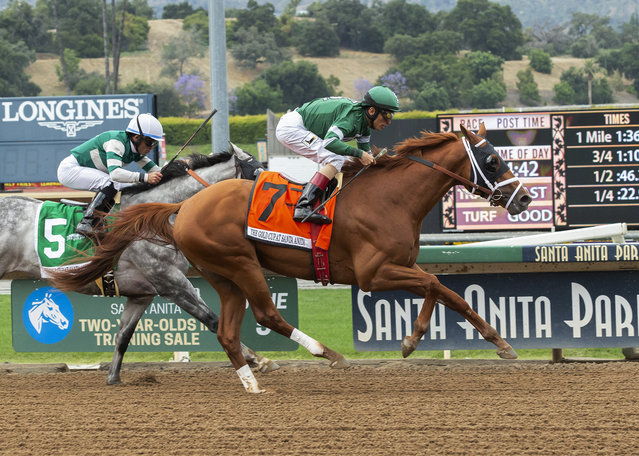 Vino Rosso and jockey John Velazquez outgame Gift Box with jockey Joel Rosario for victory in the Grade I, The Gold Cup at Santa Anita Park in Arcadia, Calif., Monday, May 27, 2019. They won the Grade I, $500,000 The Gold Cup horse racing. (Photo by Benoit Photo via AP Photo) 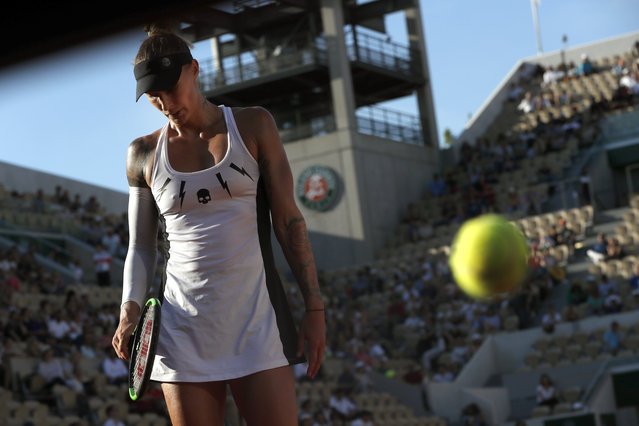 Slovenia's Polona Hercog misses a return in her third round match of the French Open tennis tournament against Sloane Stephens of the U.S. at the Roland Garros stadium in Paris, Friday, May 31, 2019. (Photo by Pavel Golovkin/AP Photo) 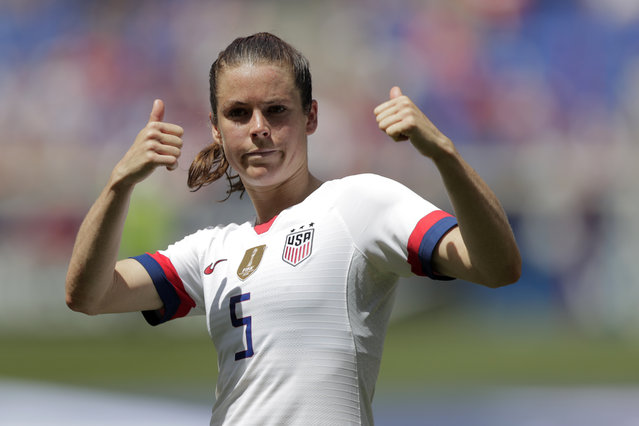 Kelley O'Hara, a defender for the United States women's national team, which is headed to the FIFA Women's World Cup, is introduced for fans during a send-off ceremony following an international friendly soccer match against Mexico, Sunday, May 26, 2019, in Harrison, N.J. The U.S. won 3-0. (Photo by Julio Cortez/AP Photo) 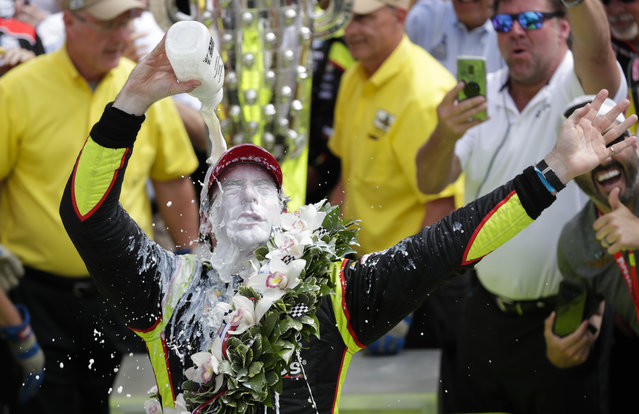 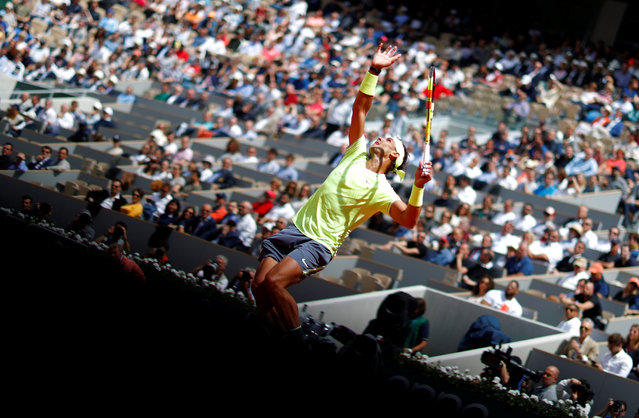 Spain's Rafael Nadal plays a backhand return Germany's Yannick Hanfmann during their men's singles first round match on day two of The Roland Garros 2019 French Open tennis tournament in Paris on May 27, 2019. (Photo by Kai Pfaffenbach/Reuters) 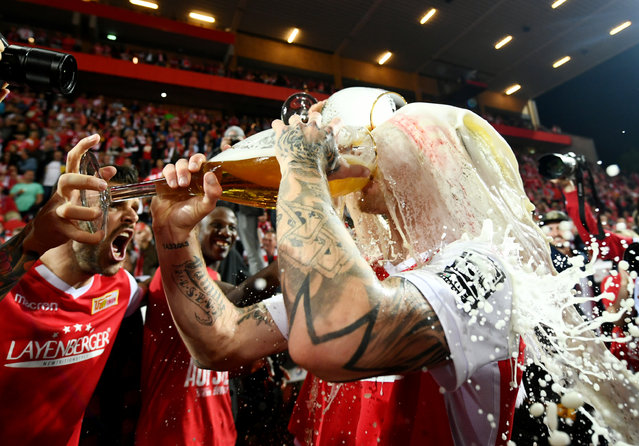 Union Berlin players celebrate after the Bundesliga playoff second leg match between 1. FC Union Berlin and VfB Stuttgart at Stadion an der alten Foersterei on May 27, 2019 in Berlin, Germany. (Photo by Annegret Hilse/Reuters) 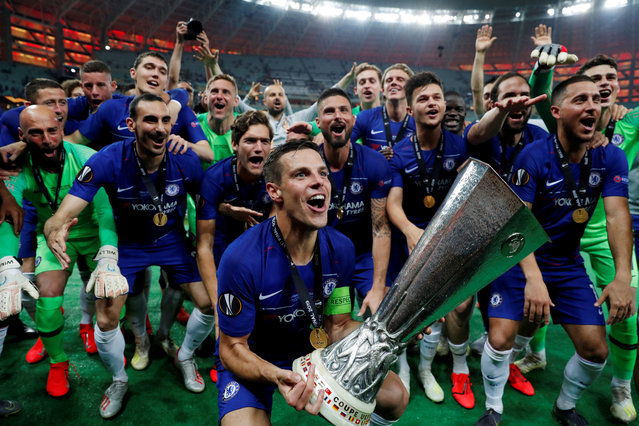 Chelsea's Spanish defender Cesar Azpilicueta celebrates with the trophy after winning the UEFA Europa League final football match between Chelsea FC and Arsenal FC at the Baku Olympic Stadium in Baku, Azerbaijian, on May 29, 2019. (Photo by Lee Smith/Reuters) 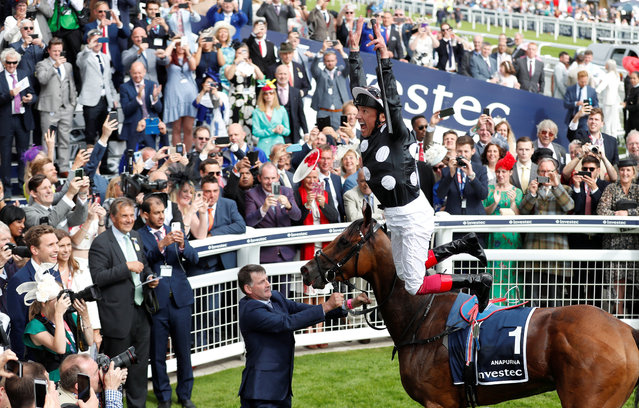 Frankie Dettori celebrates after riding Anapurna to win The Investec Oaks at Epsom Racecourse on May 31, 2019 in Epsom, England. (Photo by Matthew Childs/Action Images via Reuters)