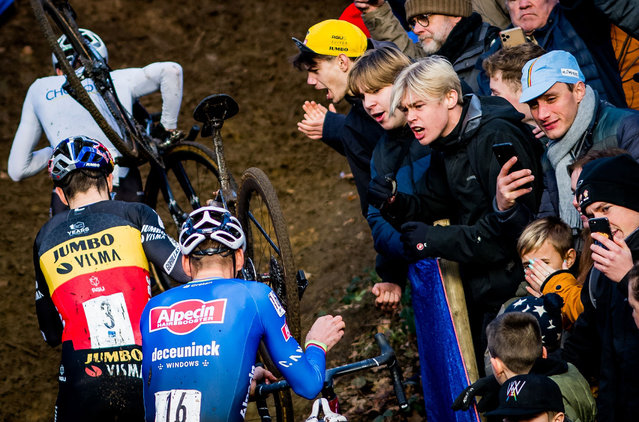 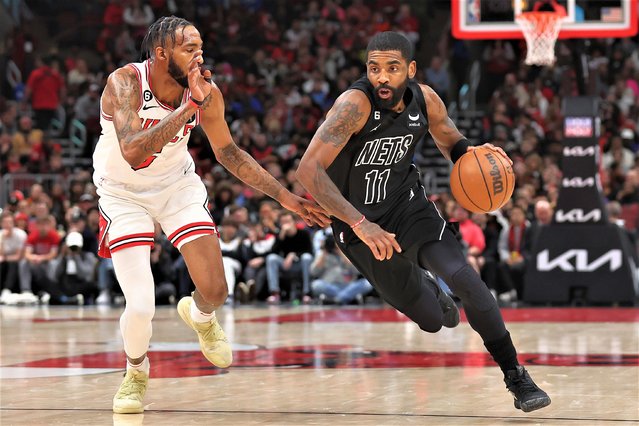 Kyrie Irving #11 of the Brooklyn Nets drives to the basket against Derrick Jones Jr. #5 of the Chicago Bulls during the first half at United Center on January 04, 2023 in Chicago, Illinois. (Photo by Michael Reaves/Getty Images) 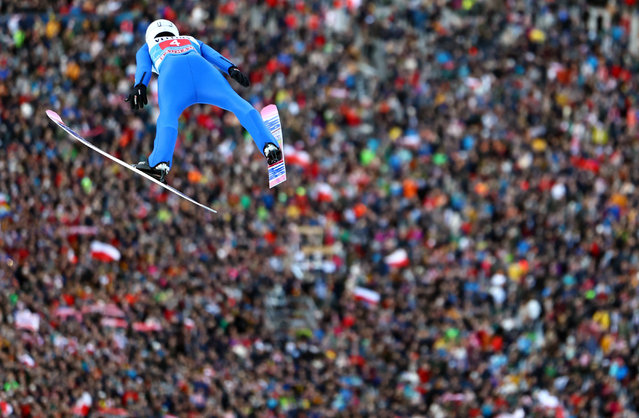 Piotr Zyla, of Poland, competes in the Four Hills ski-jumping tournament on January 1, 2023 in Garmisch-Partenkirchen, Germany, which will end on January 6. (Photo by Lisi Niesner/Reuters) 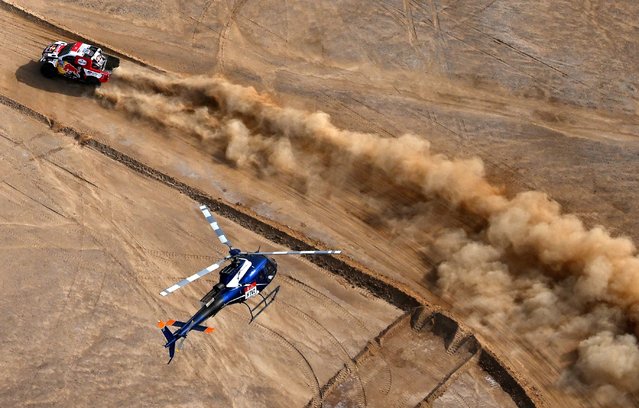 Toyota's driver Nasser Al-Attiyah of Qatar (R) and his co-driver Mathieu Baumel of France compete during the prologue of the Dakar 2023 by the Red Sea in Yanbu, Saudi Arabia, on December 31, 2022. Swedish driver Mattias Ekstrom and his co-driver Emil Bergkvist of Sweden won the prologue ahead of French driver Sebastien Loeb and Belgian co-driver Fabian Lurquin. (Photo by Franck Fife/AFP Photo) 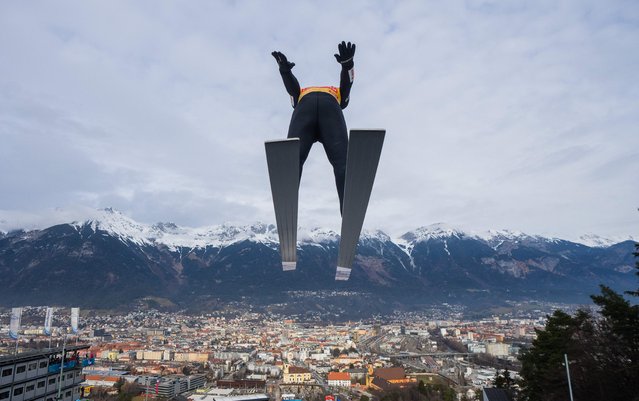 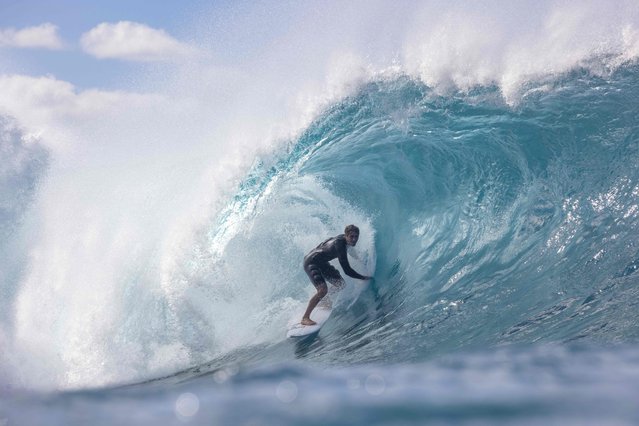 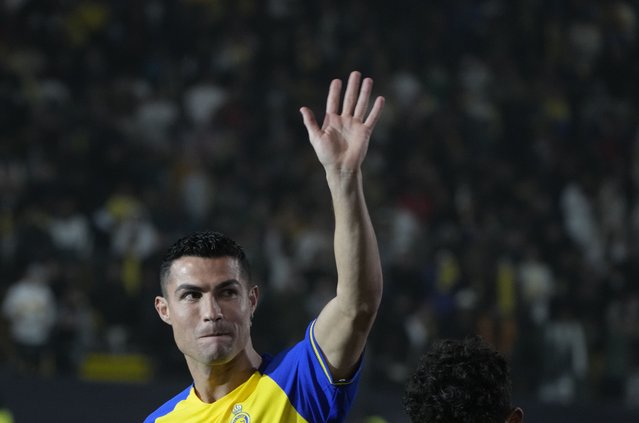 Cristiano Ronaldo greets Saudi fans during his official unveiling as a new member of Al Nassr soccer club in in Riyadh, Saudi Arabia, Tuesday, January 3, 2023. Ronaldo, who has won five Ballon d'Ors awards for the best soccer player in the world and five Champions League titles, will play outside of Europe for the first time in his storied career. (Photo by Amr Nabil/AP Photo) 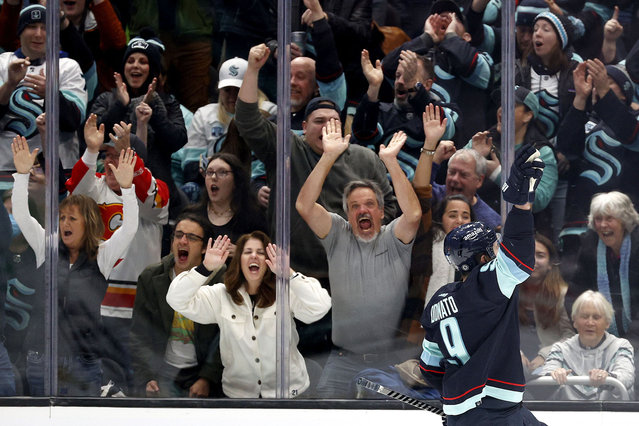 Fans celebrate after a goal by Ryan Donato #9 of the Seattle Kraken during the first period against the Calgary Flames at Climate Pledge Arena on December 28, 2022 in Seattle, Washington. (Photo by Steph Chambers/Getty Images) 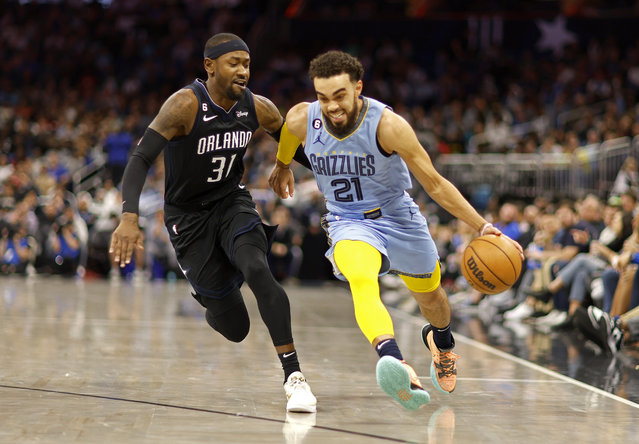 Tyus Jones #21 of the Memphis Grizzlies drives on Terrence Ross #31 of the Orlando Magic during a game at Amway Center on January 05, 2023 in Orlando, Florida. (Photo by Mike Ehrmann/Getty Images) 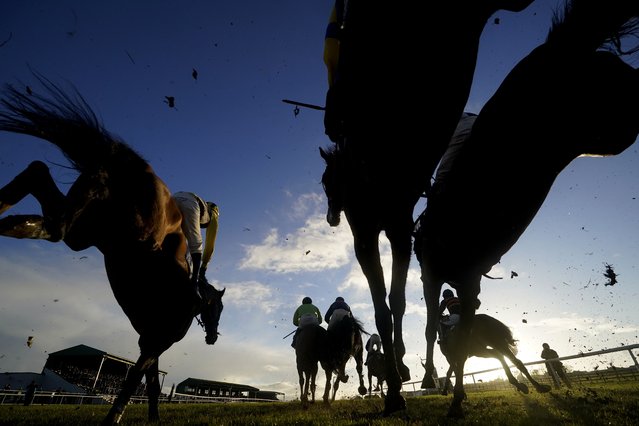 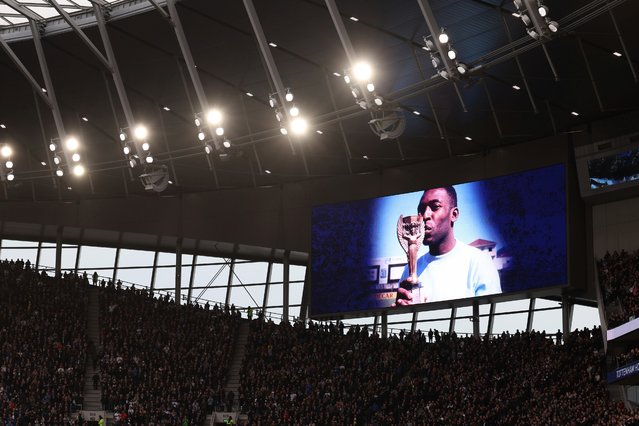 A picture of soccer legend Pele is displayed on a giant screen before the English Premier League soccer match between Tottenham Hotspur and Aston Villa at Tottenham Hotspur Stadium in London, Sunday, January 1, 2023. (Photo by Ian Walton/AP Photo) 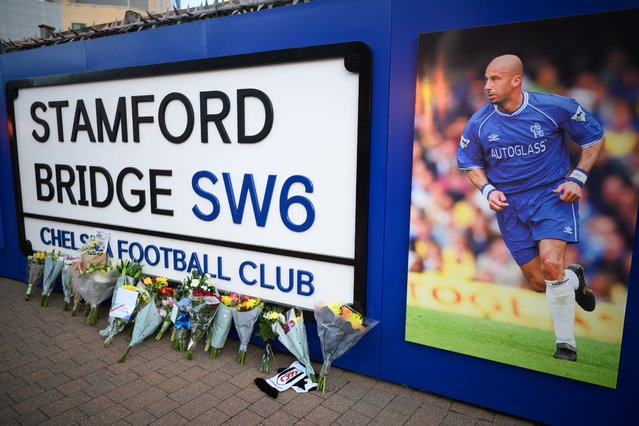 Floral tributes are shown as tributes are made to the former Chelsea striker and manager Gianluca Vialli following his death at the age 58, at Stamford Bridge on January 06, 2023 in London, England. Former Italy, Juventus and Chelsea footballer Gianluca Vialli died today, aged 58, from pancreatic cancer. Vialli made 59 appearances for Italy, scoring 16 goals. He joined Chelsea as a striker in 1996 and later assumed the role of their player-manager winning the Cup Winners' Cup in 1998, and the League Cup. He is survived by his wife and two daughters. (Photo by Leon Neal/Getty Images) 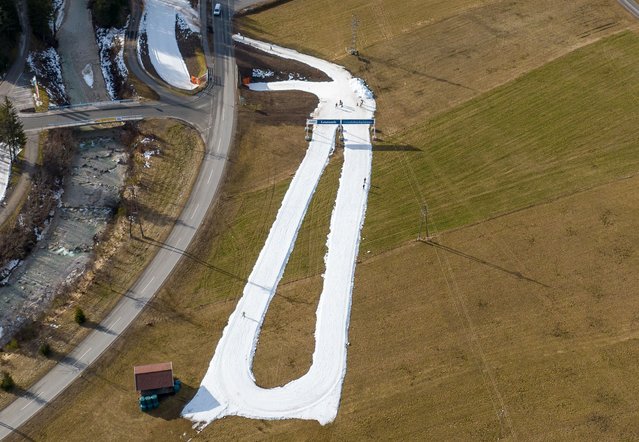 This aerial view taken on January 2, 2023 shows ski tourists on ski slopes amidst snow-free meadows in Leutasch, Austria. Due to the warm temperatures of the last few days, there is a lack of snow in the ski areas. (Photo by Daniel Liebl/various sources/AFP Photo) 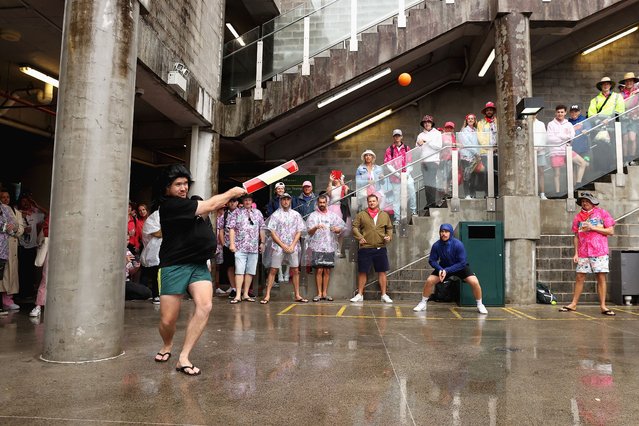 Spectators play an impromptu game of cricket behind the Victor Trumper Stand during a rain delay during day three of the Second Test match in the series between Australia and South Africa at Sydney Cricket Ground on January 06, 2023 in Sydney, Australia. (Photo by Cameron Spencer/Getty Images) 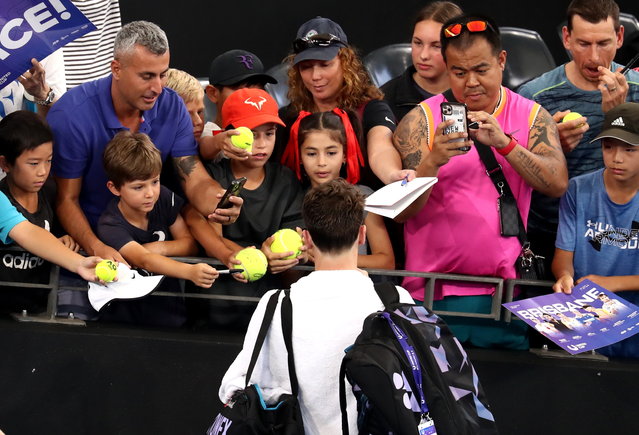 Casper Ruud of Norway signs autographs for fans after his win against Thiago Monteiro of Brazil during the 2023 United Cup tennis match between Brazil and Norway at Pat Rafter Arena in Brisbane, Australia, 01 January 2023. (Photo by Jason O'Brien/EPA/EFE) 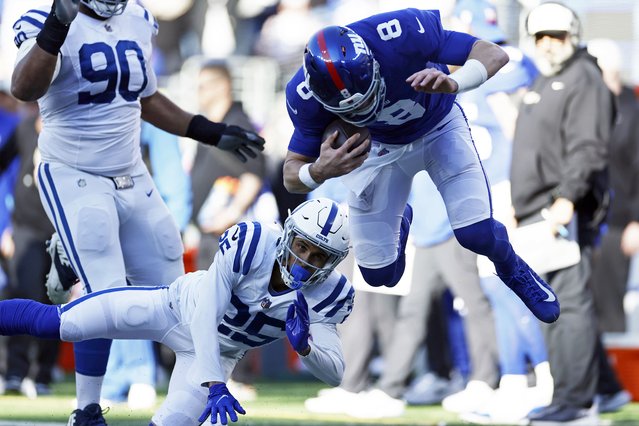 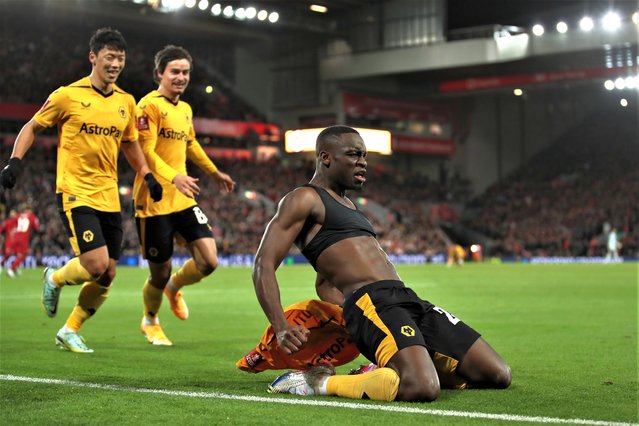 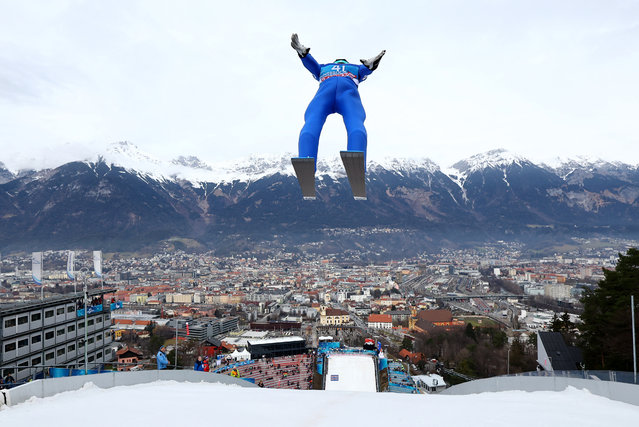 Peter Prevc of Slovenia competes during the Qualification at the Four Hills Tournament Innsbruck on January 3, 2023 in Innsbruck, Austria. (Photo by Lisi Niesner/Reuters) 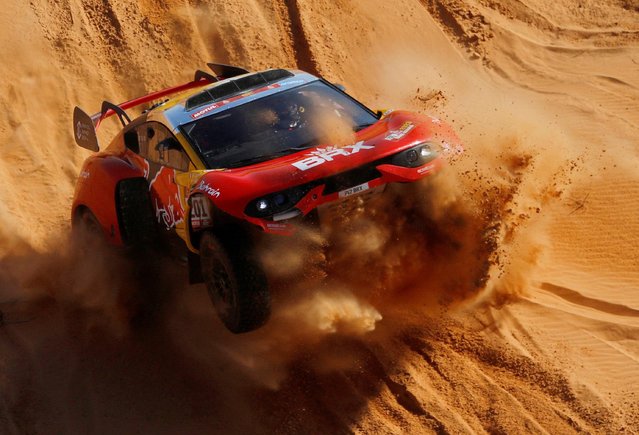 Bahrain Raid Xtreme's Sebastien Loeb and co-driver Fabian Lurquin in action during stage 5 of the Dakar Rally, Ha'il to Ha'il, Saudi Arabia on January 5, 2023. (Photo by Hamad I Mohammed/Reuters) 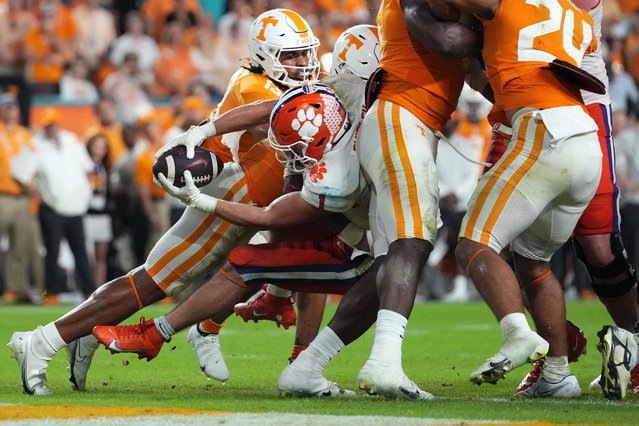 Clemson Tigers running back Will Shipley (1) reaches the ball into the end zone to convert on a two-point conversion against the Tennessee Volunteers during the second half of the 2022 Orange Bowl at Hard Rock Stadium in Miami Gardens, FL, USA on December 30, 2022. (Photo by Jasen Vinlove/USA TODAY Sports)
Edit Del
10 Jan 2023 05:57:00, post received 0 comments
Publication archive:
←   →
Popular tags:
All tags
Last searches: