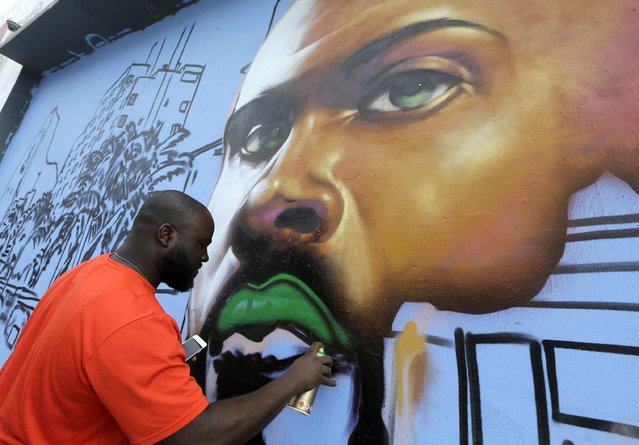 Artist Max Sansing, of Chicago, Ill., works on a mural, Friday, December 2, 2016, in the Wynwood Art District in Miami, as the annual Art Basel festival continues, featuring poolside parties, blocks of art fairs and outdoor red carpet events. This marks the 15th year that Art Basel has been held in the Miami area. (Photo by Alan Diaz/AP Photo) 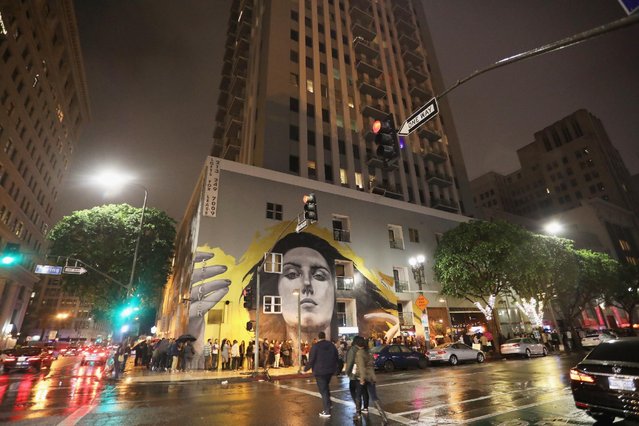 A Donald Trump mural covers a building in the Wynwood neighborhood of Miami, Florida, on October 27, 2016. The Anti-Trump, batman themed mural was created by the artists of the Bushwick Collective ahead of the US presidential election. (Photo by Rhona Wise/AFP Photo) 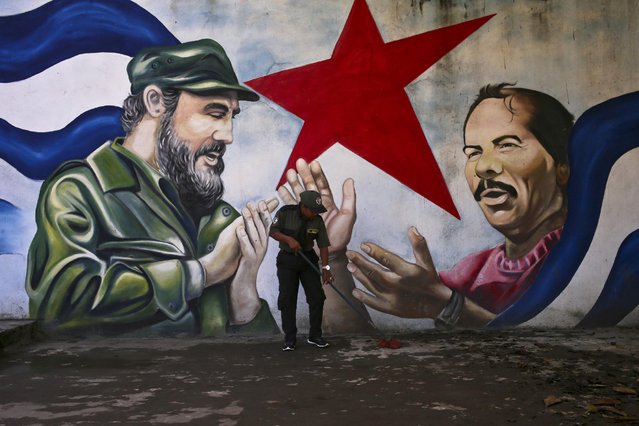 Exterior view of a shelter that houses around 60 female migrants, mainly from Eritrea and Ethiopia, is seen at the camp in Norrent-Fontes, about 70km from Calais, France, October 21, 2016. The women staying there say it is much safer for them away from Calais town port. Picture taken October 21, 2016. (Photo by Sally Hayden/Thomson Reuters Foundation) 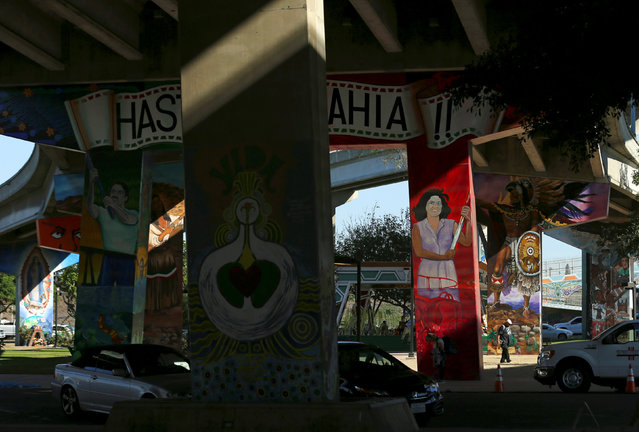 A man walks through Chicano Park situated under a bridge and highway interchange in San Diego, California, U.S., November 3, 2016. (Photo by Mike Blake/Reuters) 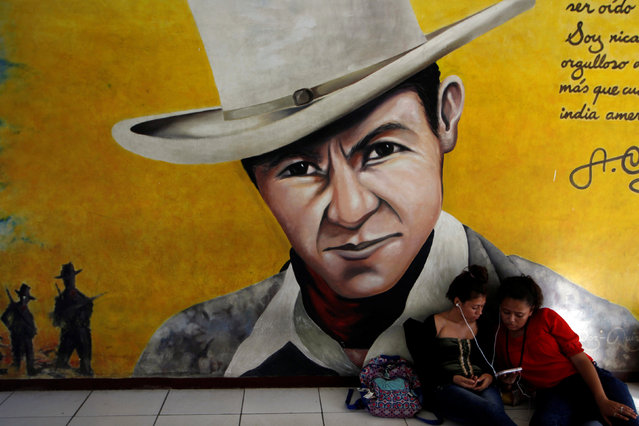 University students listen to music in front of a mural of revolutionary leader Augusto Cesar Sandino at the National Autonomous University of Managua (UNAN) in Managua, Nicaragua, November 4, 2016. (Photo by Oswaldo Rivas/Reuters) A woman walks past a mural of late revolutionary hero Ernesto “Che” Guevara at the National Autonomous University of Managua (UNAN) in Managua, Nicaragua, November 4, 2016. (Photo by Oswaldo Rivas/Reuters) 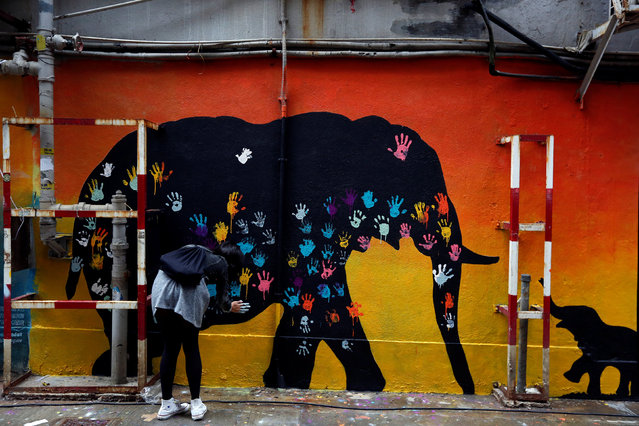 A participant makes a hand print during a campaign to raise awareness on illegal wildlife trade, in Hong Kong, China November 10, 2016. (Photo by Bobby Yip/Reuters) 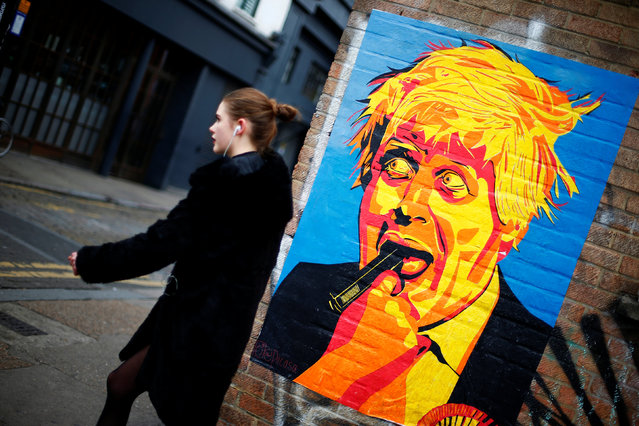 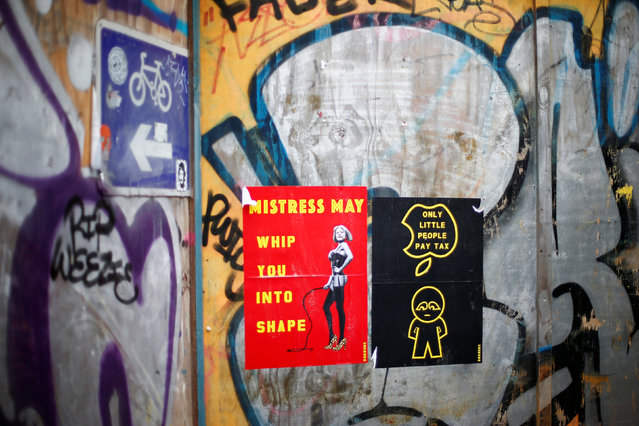 A caricature of Britain's Prime Minister Theresa May is seen on a graffiti sprayed temporary structure set up around a building site in east London, Britain November 18, 2016. (Photo by Andrew Winning/Reuters) 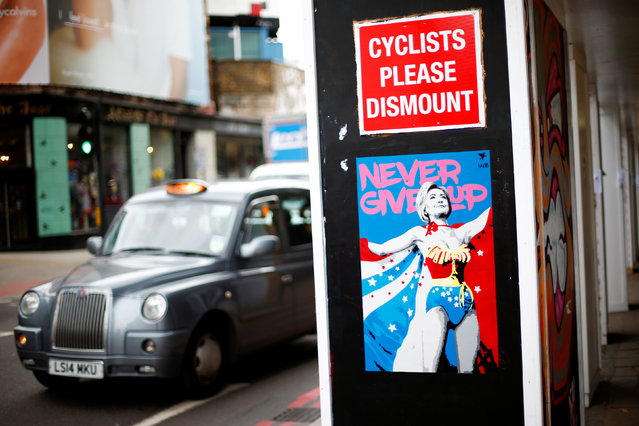 A caricature of Hillary Clinton as Wonder Woman with her message to young girls from her speech after conceding the U.S. elections is seen on a graffiti sprayed temporary structure set up around a building site in east London, Britain November 18, 2016. (Photo by Andrew Winning/Reuters) 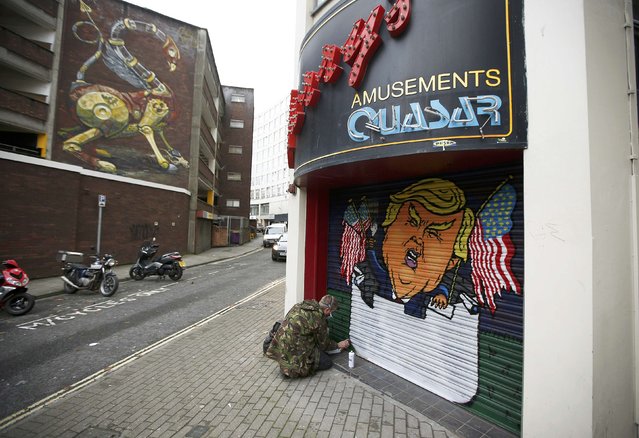 Artist Jack Dones paints a mural of US President elect Donald Trump on the shutter of a former amusement arcade in Bristol, Britain November 18, 2016. (Photo by Peter Nicholls/Reuters) 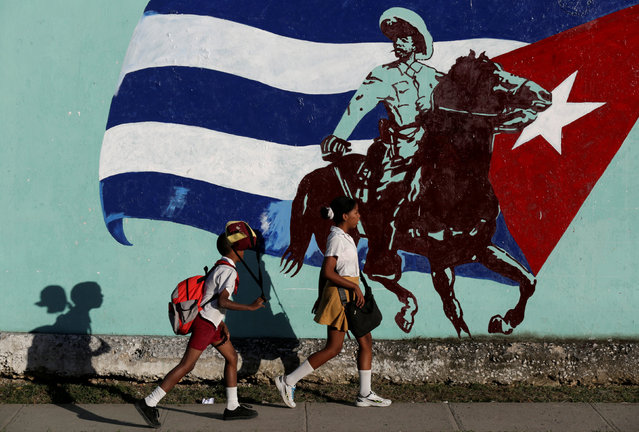 Cuban students walk in front of a mural of the Cuban flag in Havana, Cuba, November 22, 2016. (Photo by Enrique de la Osa/Reuters) 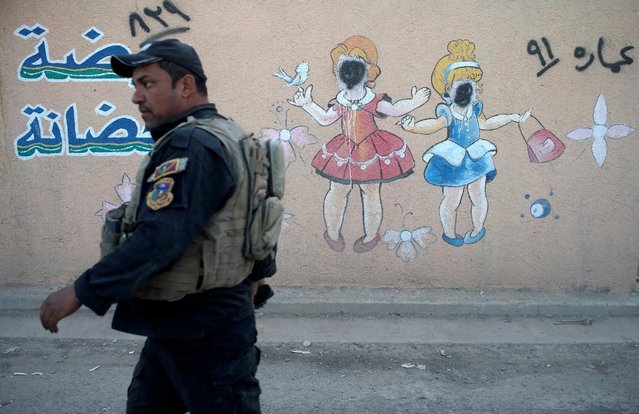 Member of Iraqi special forces walks past mural with faces blotted out by Islamic State militants on the wall of a kindergarten in Mosul, Iraq November 26, 2016. (Photo by Goran Tomasevic/Reuters) 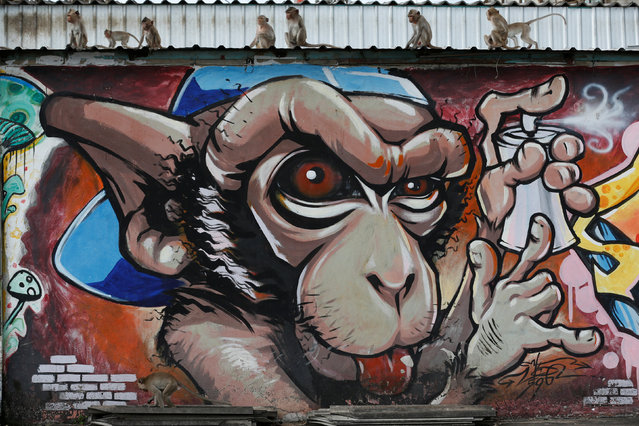 Monkeys sit on a graffiti wall during the Monkey Buffet Festival, near the Phra Prang Sam Yot temple in Lopburi province, north of Bangkok, Thailand November 27, 2016. (Photo by Chaiwat Subprasom/Reuters) People pass next to a mural depicting the communist leaders at the 23 Enero neighbourhood in Caracas, Venezuela, November 30, 2016. (Photo by Ueslei Marcelino/Reuters) 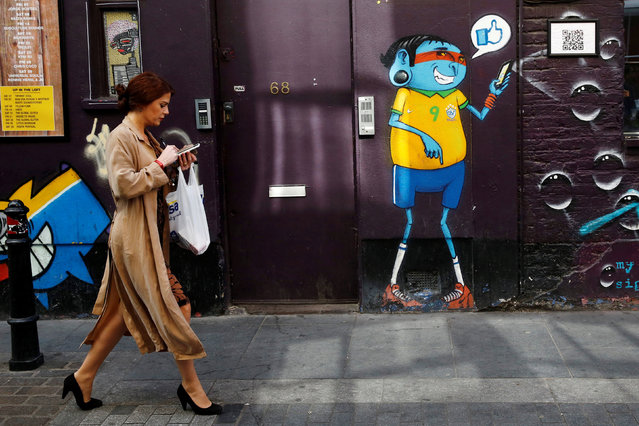 A woman looks at her mobile phone as she passes a mural in Shoreditch, London, Britain October 5, 2016. (Photo by Stefan Wermuth/Reuters) 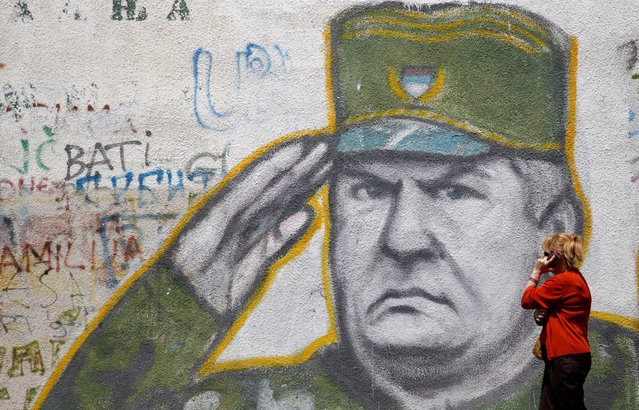 A woman walks past graffiti of Bosnian Serb wartime general Ratko Mladic in a suburb of Belgrade, Serbia, May 27, 2011. (Photo by Stoyan Nenov/Reuters) 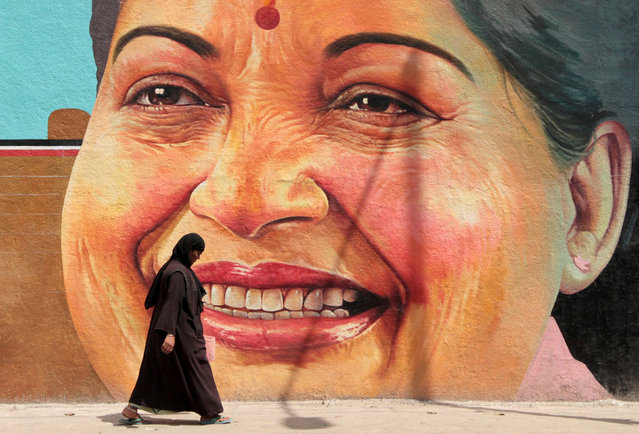 A woman walks past a portrait of J. Jayalalithaa, Chief Minister of the southern state of Tamil Nadu, in Chennai, India, March 13, 2012. (Photo by Reuters/Babu) 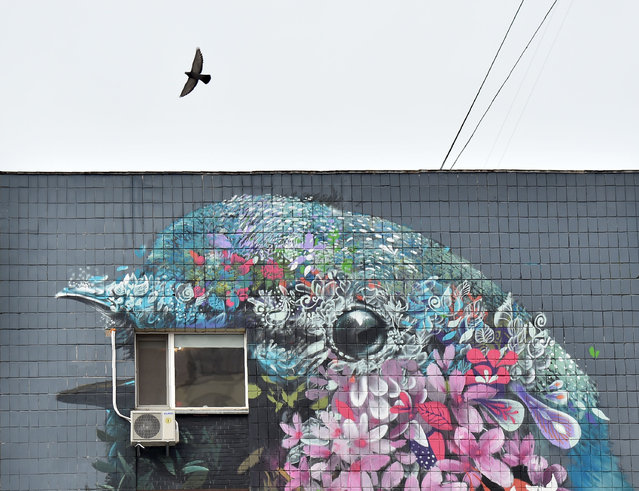 A pigeon flies above a nine- floor adorned with graffitti featuring a bird in Kiev, Ukraine on November 8, 2016. (Photo by Sergei Supinsky/AFP Photo) 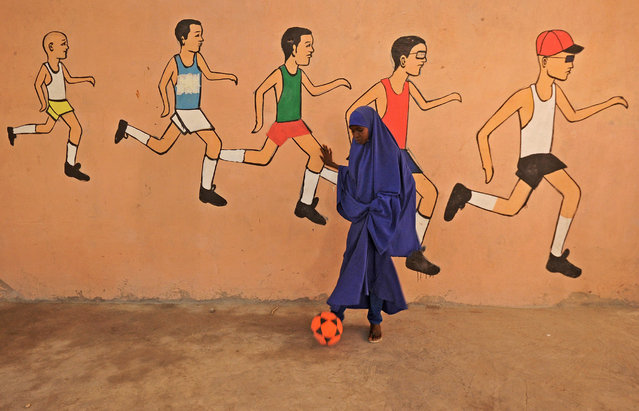 A school pupil kicks a ball during a sports lesson at a school in Mogadishu, Somalia on December 6, 2016. (Photo by Mohamed Abdiwahab/AFP Photo) 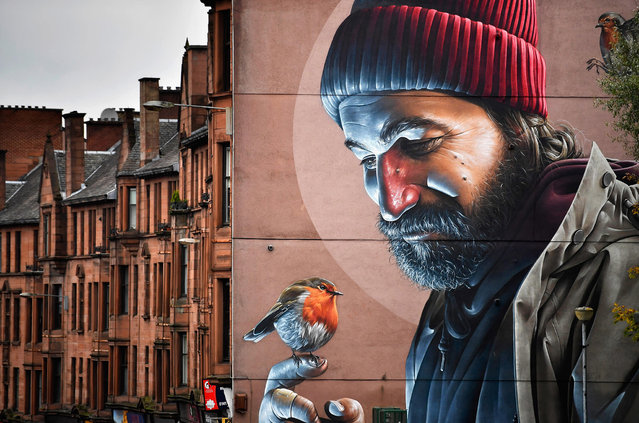 A view of one of the latest murals near Glasgow cathedral on October 26, 2016 in Glasgow, Scotland. The murals have been appearing across the city for a since 2008 with new ones appearing on a regular bases rejuvenating bare walls revitalising tired corners of Glasgow. Now a new Mural Trail has been devised with a huge range of them on display within a short walking distance from the city centre. (Photo by Jeff J. Mitchell/Getty Images) 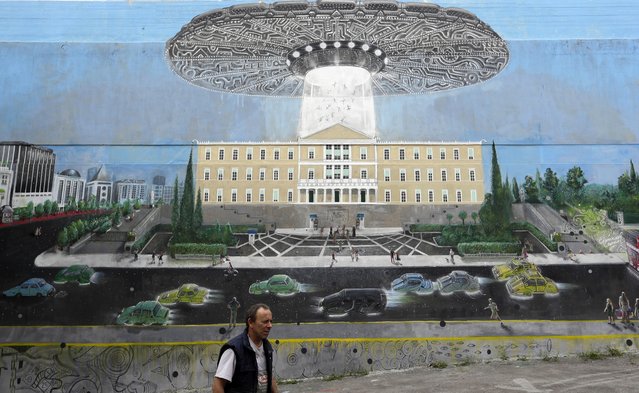 A car mechanic walks past a mural on the side of an office block depicting a flying saucer hovering over the Greek Parliament, in Athens, Monday, November 7, 2016. Greece's left-wing government has promised to swiftly impose a new series of sweeping cost cutting reforms by early next month as part of its international bailout, hoping to secure an agreement for debt relief from Eurozone lenders. (Photo by Thanassis Stavrakis/AP Photo)
Edit Del
07 Dec 2016 12:33:00, post received 0 comments
Publication archive:
←   →
Popular tags:
All tags
Last searches: