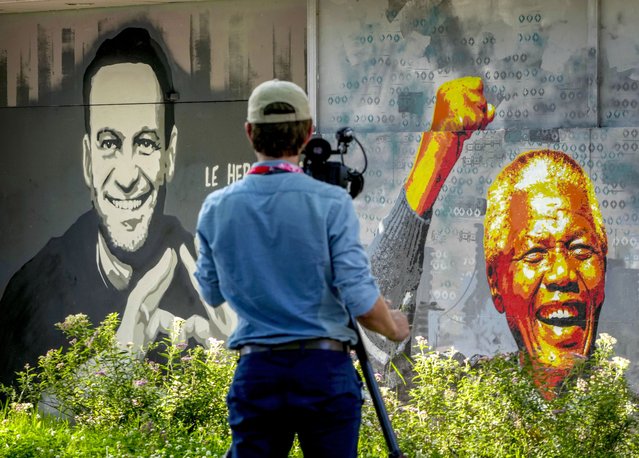 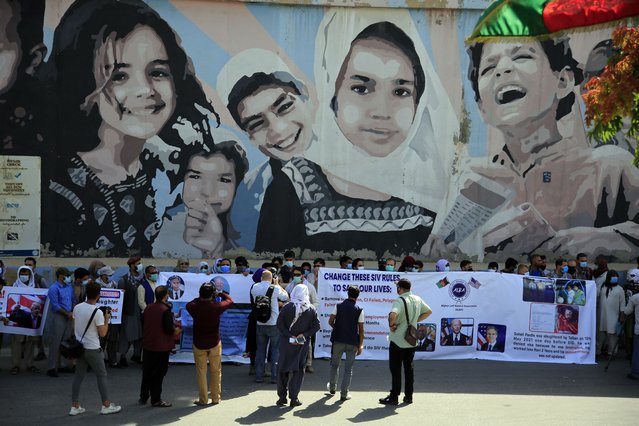 Former Afghan interpreters hold placards during a demonstrations against the US government, in front of the US Embassy in Kabul, Afghanistan, Friday, June 25, 2021. (Photo by Mariam Zuhaib/AP Photo) 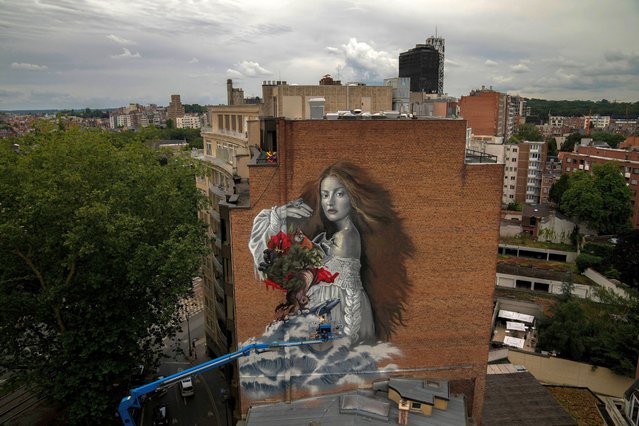 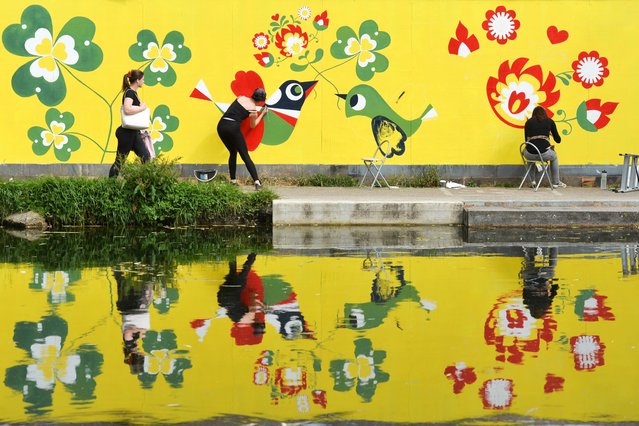 Artists Aga Grandowicz from Poland and Una Woods from Ireland are working on a new mural, a project related to Irish-Polish friendship, in the Portobello district of Dublin on June 15, 2021. Official diplomatic relations between Ireland and Poland were established in 1976. During the Cold War, relations between the two nations were limited. Ireland supported the Polish Solidarity movement. After the fall of communism in Poland, relations between the two nations tightened. In 1990, Ireland opened its embassy in Warsaw, and in 1991 Poland opened its embassy in Dublin. (Photo by Artur Widak/NurPhoto/Rex Features/Shutterstock) 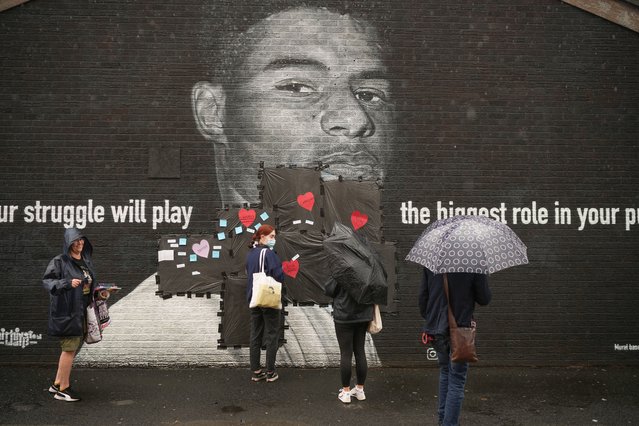 Local residents put messages of support on the plastic that covers offensive graffiti on the vandalised mural of Manchester United striker and England player Marcus Rashford on the wall of a cafe on Copson Street, Withington on July 12, 2021 in Manchester, England. Rashford and other Black players on England's national football team have been the target of racist abuse, largely on social media, after the team's loss to Italy in the UEFA European Football Championship last night. England manager Gareth Southgate, Prime Minister Boris Johnson, and the Football Association have issued statements condemning the abuse. (Photo by Christopher Furlong/Getty Images) 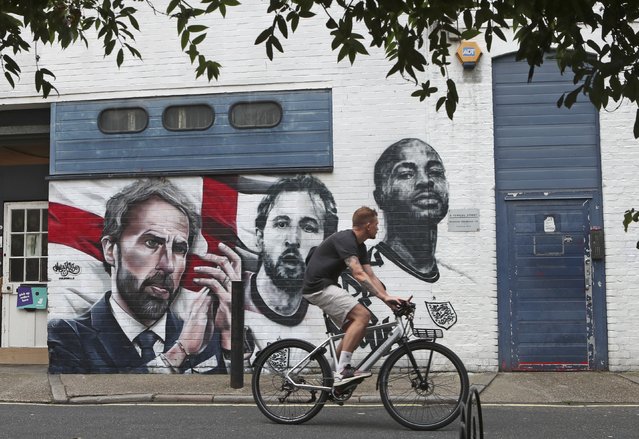 Organiser of “Upfest” Steve Hayles holds a red filter gel beside a graffiti piece by artist Insane 51, which is an interactive piece and can be viewed differently through either a blue or a red filter, like the ones in 3D glasses, revealing a woman or the skeleton within her body, on a huge wall in Bedminster, Bristol on Wednesday July 21, 2021, as the 75 murals project reaches the halfway point and various graffiti pieces are sprayed onto walls and buildings across the city over the Summer. (Photo by Ben Birchall/PA Images via Getty Images) A Kosovo Serb woman walks past a graffiti showing the Serbian flag and reading as “There's no giving up”, on a street in the majority ethnic-Serb northern part of the city of Mitrovica, on June 15, 2021. The leaders of Serbia and Kosovo are in Brussels on June 15, 2021, to resume EU-mediated talks aimed at finding a solution to one of Europe's most intractable territorial disputes. (Photo by Armend Nimani/AFP Photo) 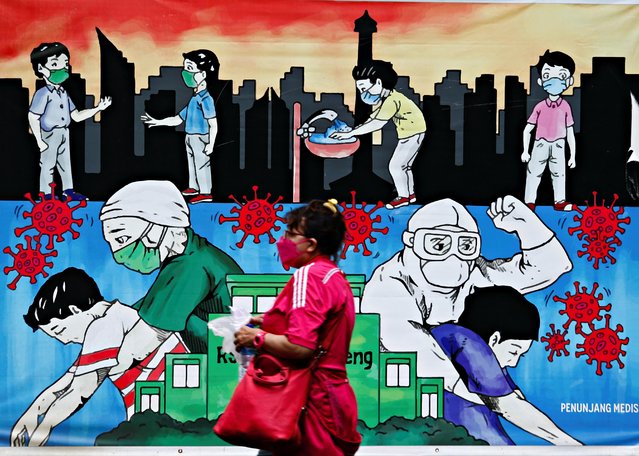 A woman wearing a protective face mask walks past a mural promoting awareness of the coronavirus outbreak, in Jakarta, Indonesia, June 24, 2021. (Photo by Ajeng Dinar Ulfiana/Reuters) 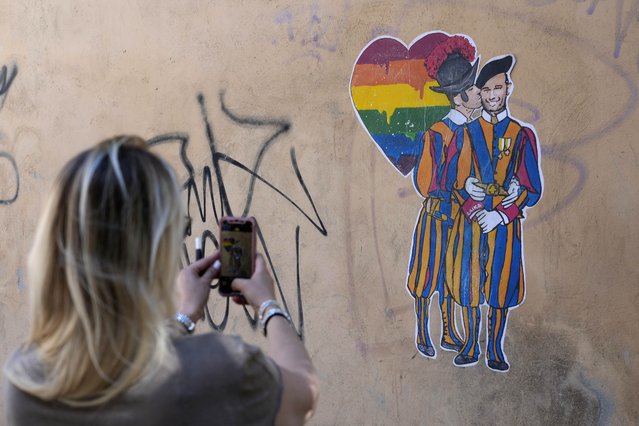 A murales showing a Swiss guard kissing a colleague, by street artist Laika, is seen on the day of the annual Pride march, in Rome, Saturday, June 26, 2021. This year's march comes amid widespread concern in Europe about legislation in Hungary that will ban showing content about LGBT issues to children and a controversial Vatican communication to Italy, criticizing a law that would extend additional protections from discrimination to the LGBT community. (Photo by Gregorio Borgia/AP Photo) 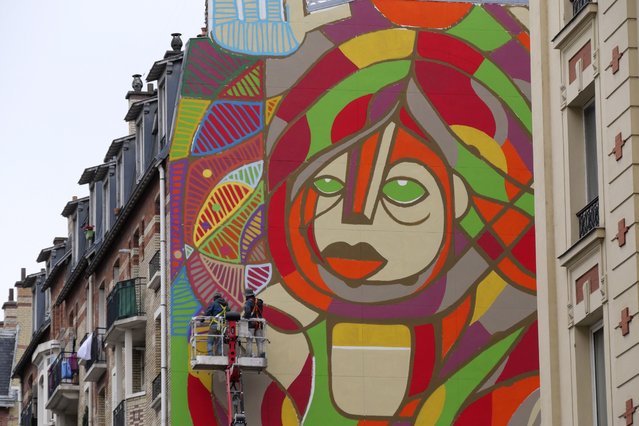 French artist Da Cruz, left, and assistant Michel work at mural, Wednesday, June 23, 2021 in Paris. A colorful human face emerges from waves like a call for hope above a Parisian street, in a giant message of optimism from American and French street artists painting a massive mural in the French capital, as the city is slowly climbing out of its virus isolation. lllustrator AJ Dungo, 29, who lives in California, and French graffiti artist Da Cruz, 44, started working in mid-June on the 25-meter (82-foot) high mural. (Photo by Nicolas Garriga/AP Photo) 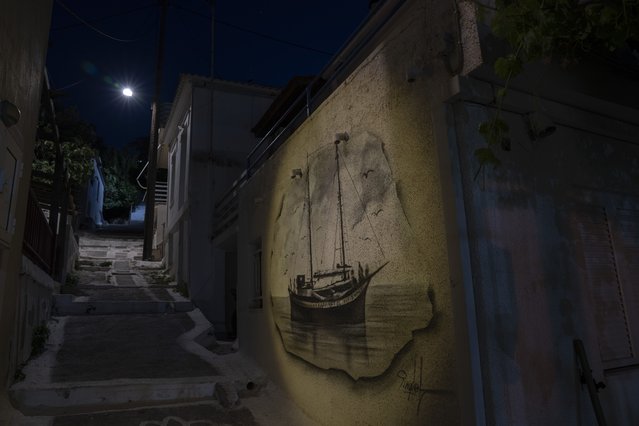 A mural made by street artist Simple G covers a wall of a house in the Bay of Marathokampos, Samos island, Greece Thursday, June 10, 2021. The mural, painted based on an old photograph, depicts the traditional wooden boat owned by the family on whose house it is painted. The art of designing and building these vessels, done entirely by hand, is under threat. Fewer people order wooden boats since plastic and fiberglass ones are cheaper to maintain. (Photo by Petros Giannakouris/AP Photo) A poster of 17-year-old Palestinian Mohammad Hamayel adorns a door of a classroom, in the village of Beita, south of the West Bank city of Nablus. Monday, June 14, 2021. Hamayel was killed during clashes with Israeli forces following a protest against the wildcat Jewish settlement of Eviatar that was established last month without the permission of Israeli authorities on land the Palestinians say is privately owned. (Photo by Majdi Mohammed/AP Photo) 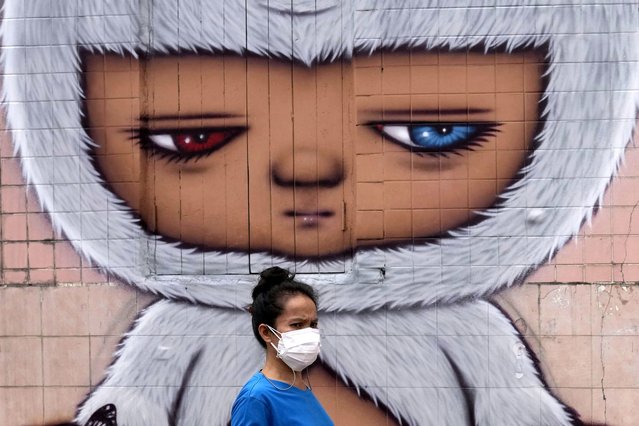