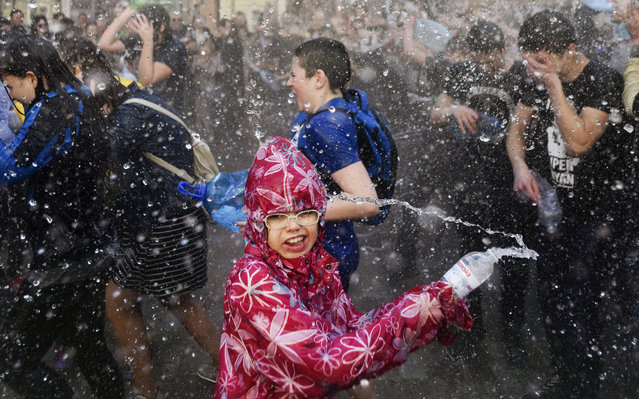 Ukrainians pour water on each other on a street in downtown of the West-Ukrainian city of Lviv, Ukraine, 09 April 2018. The custom of pouring water is an ancient spring cleansing rite that takes place on the first Monday after Orthodox Easter. (Photo by Markiian Lyseiko/EPA/EFE) 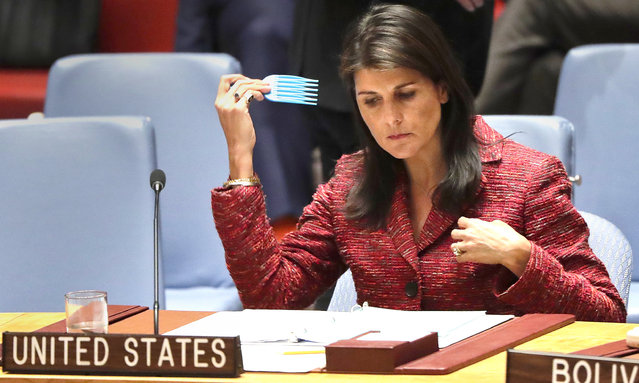 Nikki Haley, United States Ambassador to the United Nations, combs her hair before the start of a Security Council meeting, Tuesday, April 10, 2018, at U.N. headquarters. The U.N. Security Council has rejected a Russian resolution that would have created a new expert body to determine responsibility for chemical weapons attacks in Syria. Haley said the draft resolution was not impartial or independent since it would allow Russia to veto investigators and staff for the new body – and to block its findings. (Photo by Julie Jacobson/AP Photo) 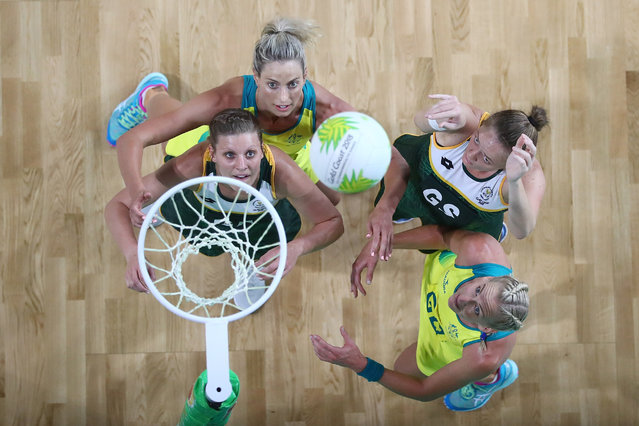 Ine-Mari Venter of South Africa shoots while Laura Geitz and April Brandley of Australia defend during the Netball match between Australia and South Africa on day four of the Gold Coast 2018 Commonwealth Games at Gold Coast Convention Centre on April 8, 2018 on the Gold Coast, Australia. (Photo by Chris Hyde/Getty Images) 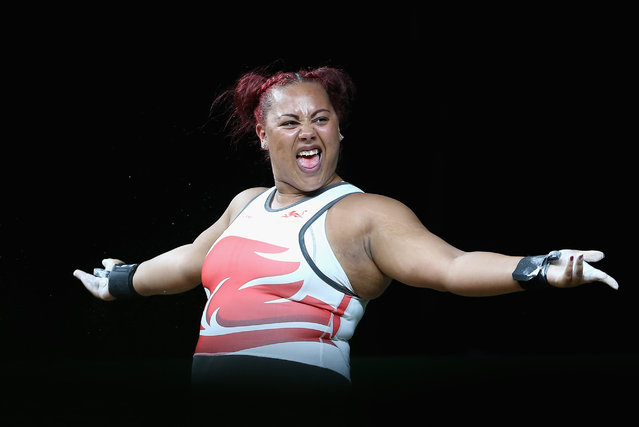 Emily Campbell of England competes in the Women's 90kg Final during Weightlifting on day five of the Gold Coast 2018 Commonwealth Games at Carrara Sports and Leisure Centre on April 9, 2018 on the Gold Coast, Australia. (Photo by Alex Pantling/Getty Images) 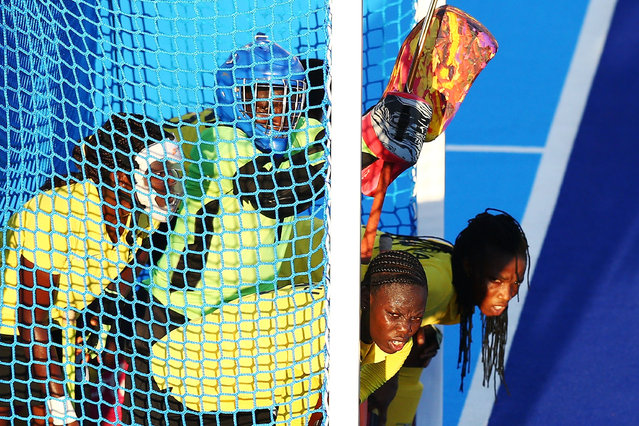 Ghana players prepare for a penalty during Hockey on day five of the Gold Coast 2018 Commonwealth Games at Gold Coast Hockey Centre on April 9, 2018 on the Gold Coast, Australia. (Photo by Michael Dodge/Getty Images) 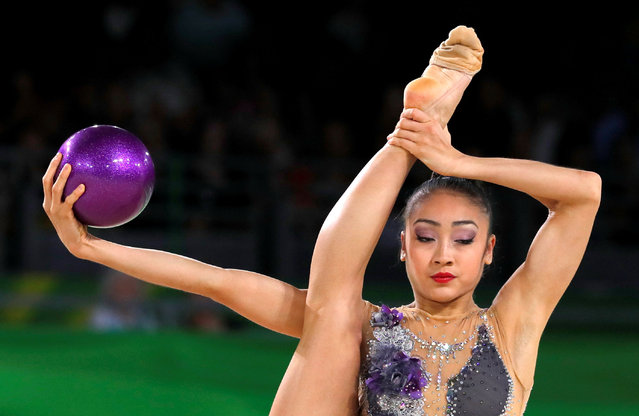 Katherine Uchida of Canada performs with the ball in the Individual All-Around Final during the Rhythmic Gymnastics on day eight of the Gold Coast 2018 Commonwealth Games at Coomera Indoor Sports Centre on April 11, 2018 on the Gold Coast, Australia. (Photo by David Gray/Reuters) 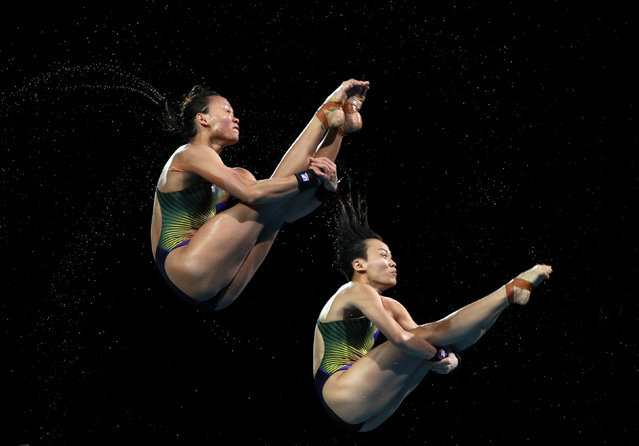 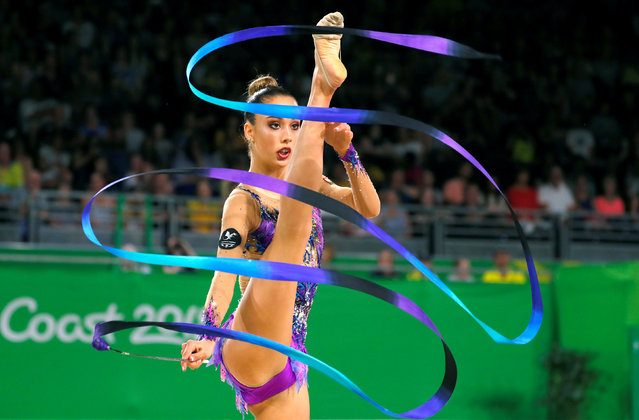 Wales' Gemma Frizelle competes in the Team Final and Individual Qualification Sub Division 2 at the Coomera Indoor Sports Centre during day seven of the 2018 Commonwealth Games in the Gold Coast, Australia on April 11, 2018. (Photo by David Gray/Reuters) 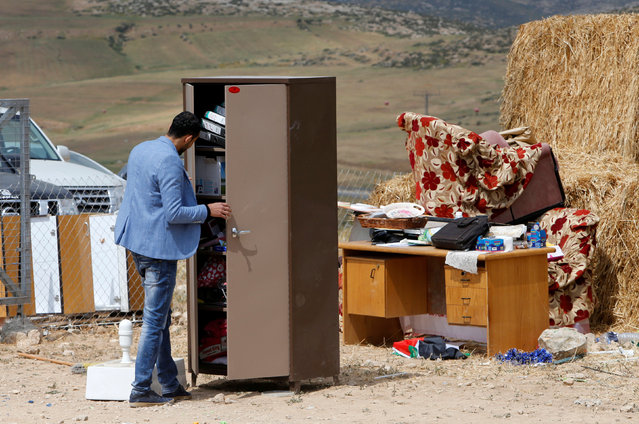 A Palestinian teacher checks a cupboard at the site of a school after Israeli forces removed structures used as classrooms, south of Hebron, in the occupied West Bank April 10, 2018. (Photo by Mussa Qawasma/Reuters) 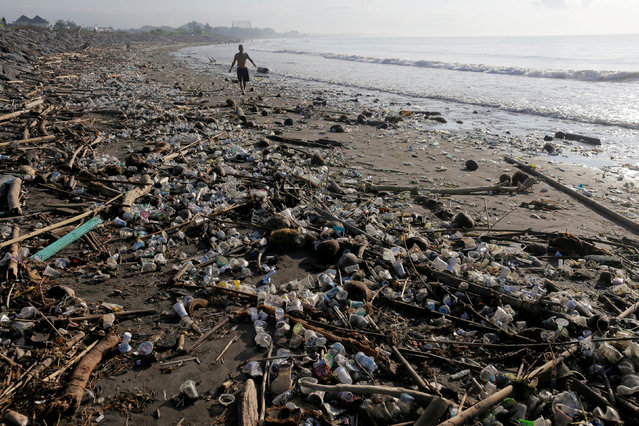 A local resident walks along a section of Matahari Terbit beach covered in plastic and other debris washed ashore by seasonal winds near Sanur, Bali, Indonesia April 11, 2018. (Photo by Johannes P. Christo/Reuters) 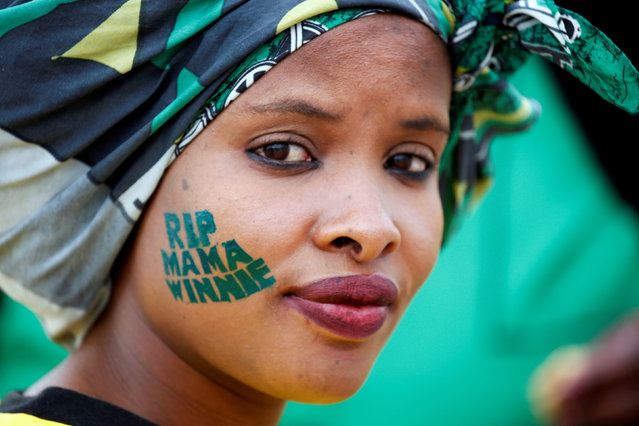 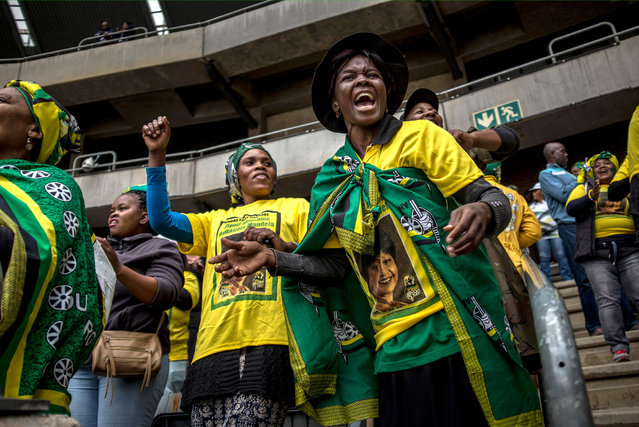 The crowd sing and dance before the start of the Memorial Service for Winnie Mandela at The Orlando Stadium on April 11, 2018, in Soweto, South Africa. The former wife of the late South African President Nelson Mandela and anti-apartheid campaigner Winnie Mandela passed away on April 2, 2018 in Johannesburg. Victor Dlamini, spokesman for the Mandela family said she died after a long illness and succumbed peacefully in the early hours of Monday afternoon surrounded by her family and loved ones. (Photo by Charlie Shoemaker/Getty Images) 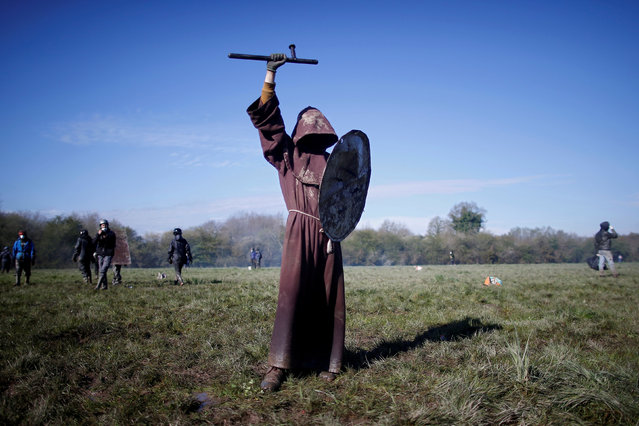 A protester holds a French gendarme's baton and shield during the evacuation operation in the zoned ZAD (Deferred Development Zone) at Notre-Dame-des-Landes, near Nantes, France, April 11, 2018. (Photo by Stephane Mahe/Reuters) 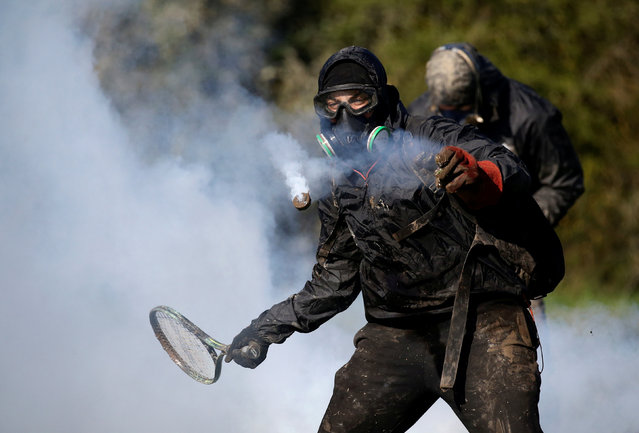 A protester uses a tennis racket to hit a tear gas cannister during the evacuation operation by French gendarmes in the zoned ZAD (Deferred Development Zone) at Notre-Dame-des-Landes, near Nantes, France, April 11, 2018. (Photo by Stephane Mahe/Reuters) 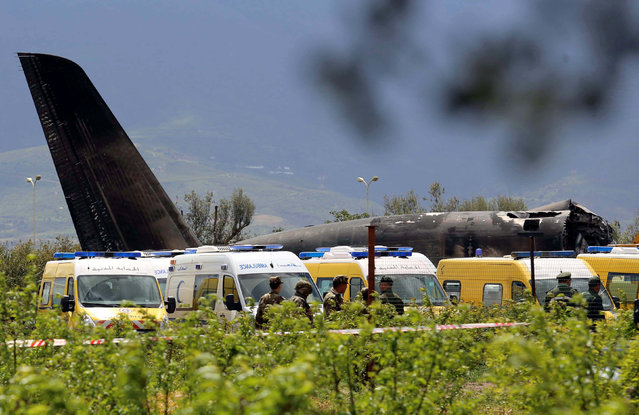 An Algerian military plane is seen after crashing near an airport outside the capital Algiers, Algeria April 11, 2018. Over 250 people are reported killed when the military plane crashed soon after takeoff in a farm field in northern Algeria on Wednesday, officials said. (Photo by Ramzi Boudina/Reuters) 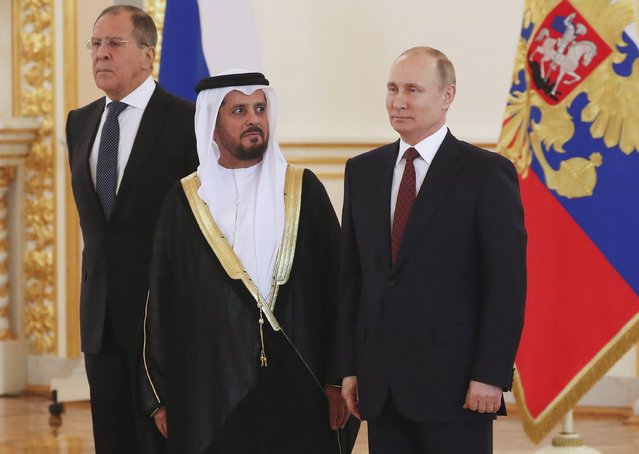 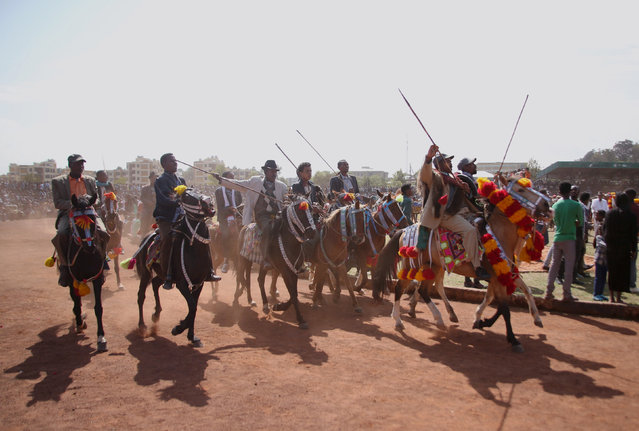 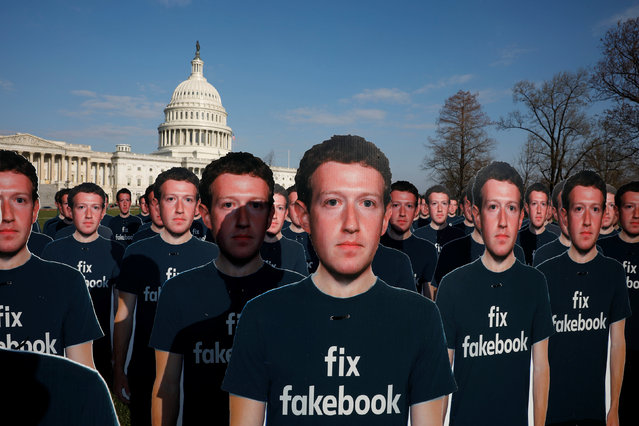 Dozens of cardboard cutouts of Facebook CEO Mark Zuckerberg are seen during an Avaaz.org protest outside the U.S. Capitol in Washington, U.S., April 10, 2018. (Photo by Aaron P. Bernstein/Reuters) 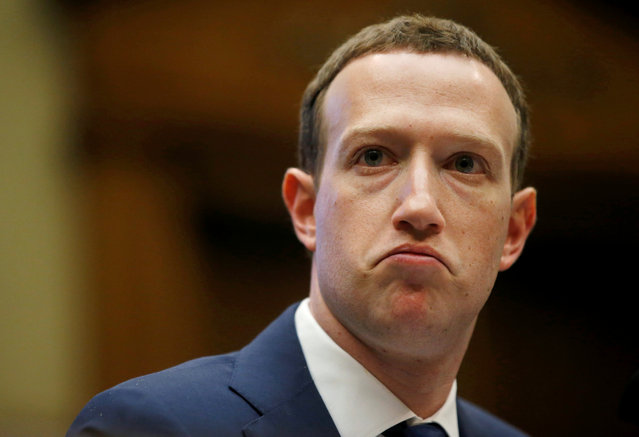 Facebook CEO Mark Zuckerberg testifies before a House Energy and Commerce Committee hearing regarding the company's use and protection of user data on Capitol Hill in Washington, April 11, 2018. (Photo by Leah Millis/Reuters) 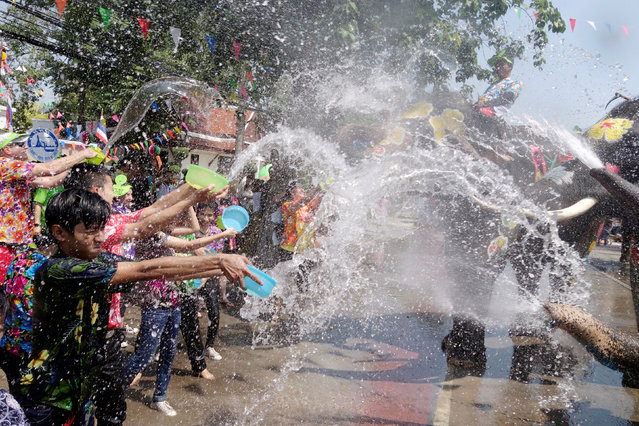