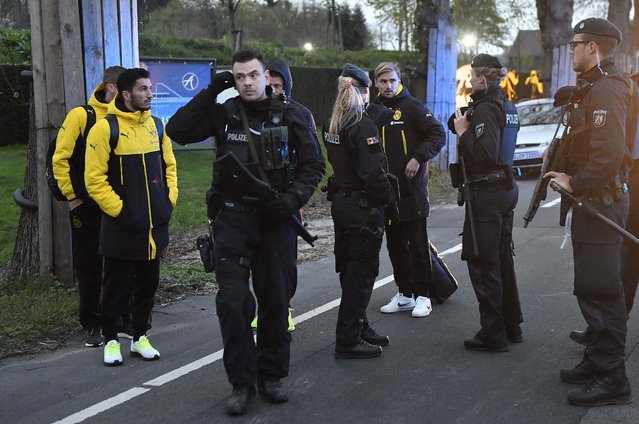 Dortmund's Marcel Schmelzer talks to police officers outside the team bus after it was damaged in an explosion before the Champions League quarterfinal soccer match between Borussia Dortmund and AS Monaco in Dortmund, western Germany, Tuesday, April 11, 2017. (Photo by Martin Meissner/AP Photo) 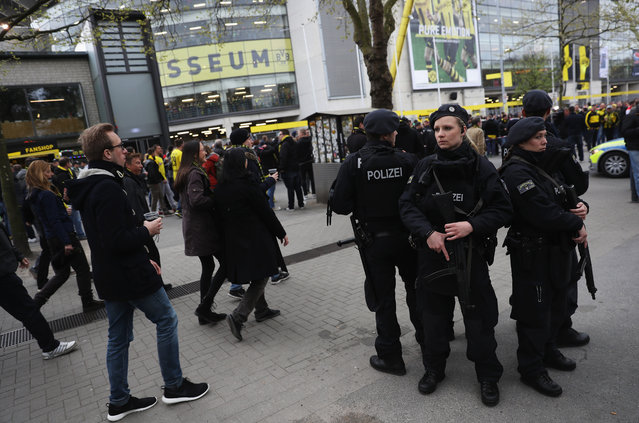 Police patrol outside the ground prior to the UEFA Champions League Quarter Final first leg match between Borussia Dortmund and AS Monaco at Signal Iduna Park on April 12, 2017 in Dortmund, Germany. The match was rescheduled after an alleged terrorist attack on the Borussia Dortmund team coach as it made it's way to the stadium. (Photo by Maja Hitij/Bongarts/Getty Images) 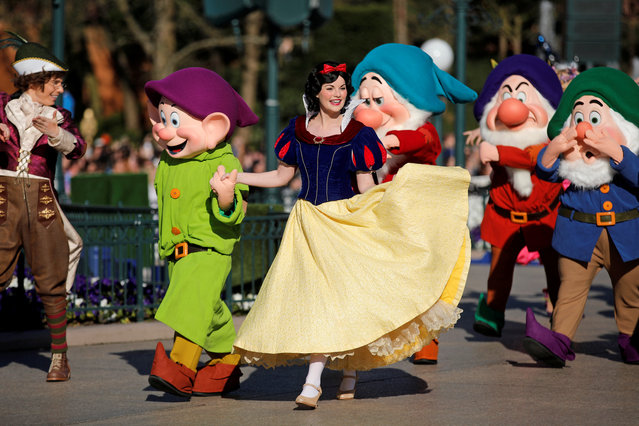 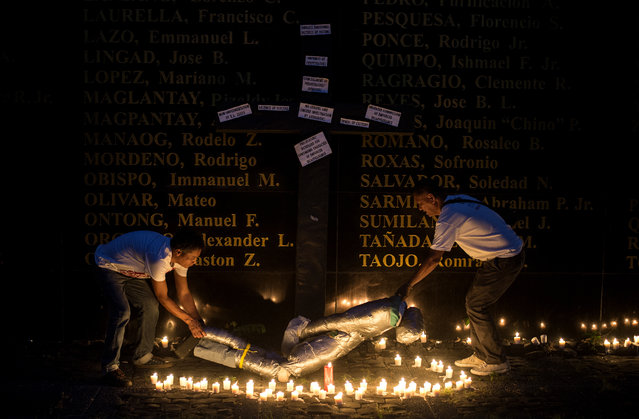 People lift a mock victim during a prayer vigil in support of the families of victims of extra-judicial killings in Manila on April 12, 2017. More than 6,000 people have died, seven months after President Rodrigo Duterte ordered an unprecedented crime war on drugs that has drawn global criticism but enjoys popularity in the mainly Catholic nation. (Photo by Noel Celis/AFP Photo) 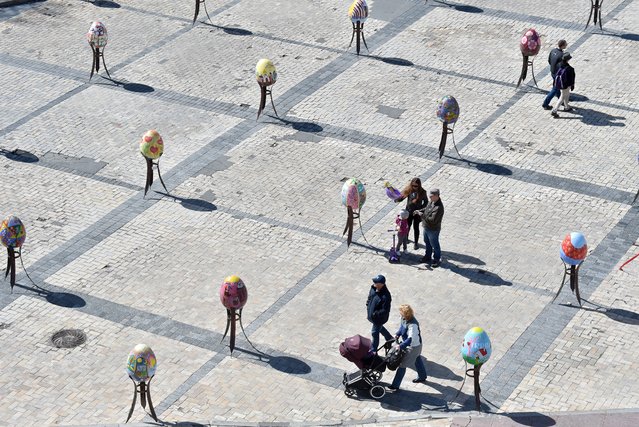 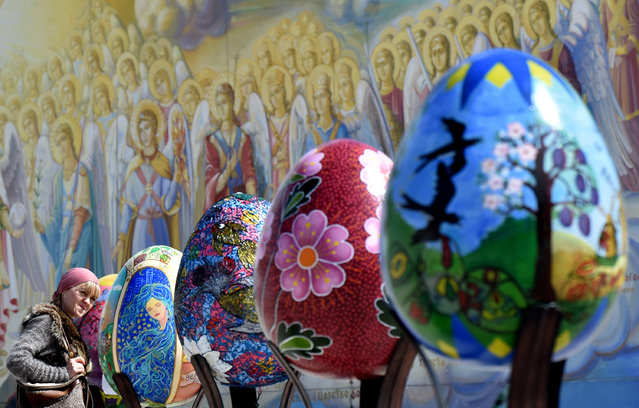 A woman looks at huge Easter eggs as they walk in the open air festival in the center of Kiev on April 12, 2017. (Photo by Sergei Supinsky/AFP Photo) 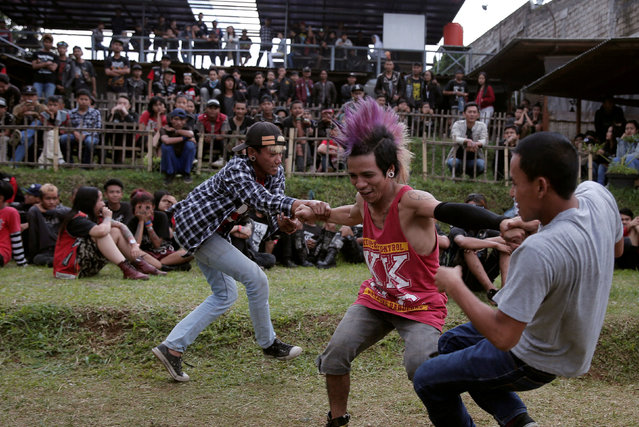 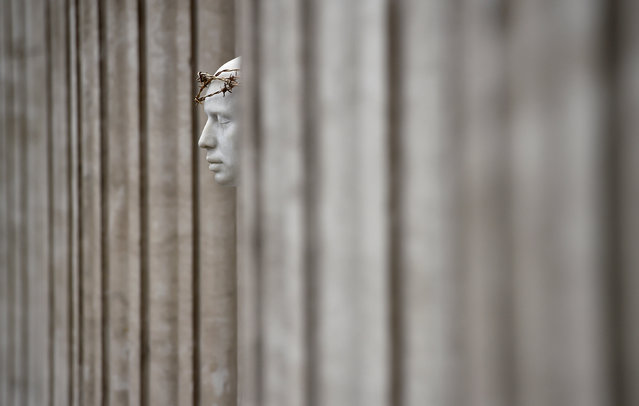 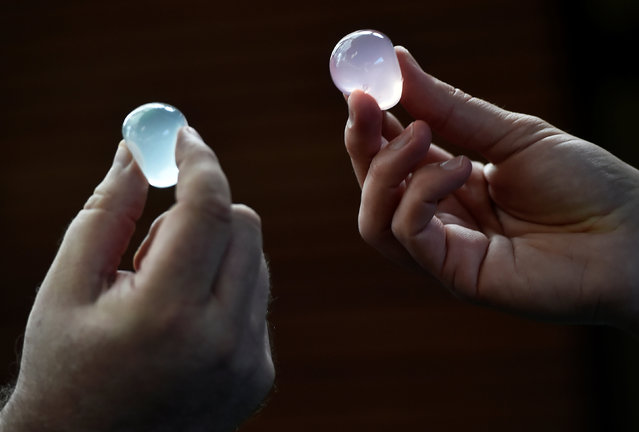 People hold “Ooho” plastic-less water containers in London, Britain, April 12, 2017. It's a pretty spherical ball that is made of seaweed, and can help reduce plastic waste. An edible alternative to plastic water bottles made from seaweed was showcased at the Science Museum in London on Wednesday, April 12. Ooho is described by its makers as “water you can eat”. The membrane in its liquid form is coated on spheres of ice. They become balls of water as the ice melts and the membrane solidifies. It is biodegradable, hygienic and costs one British penny per unit to make. Ooho designer Pierre Paslier described the product as being like a “man-made fruit”, which uses a double membrane to contain water. To carry larger quantities of water, a number of the capsules can be packed into a larger and thicker skin, much like an orange. (Photo by Hannah McKay/Reuters) 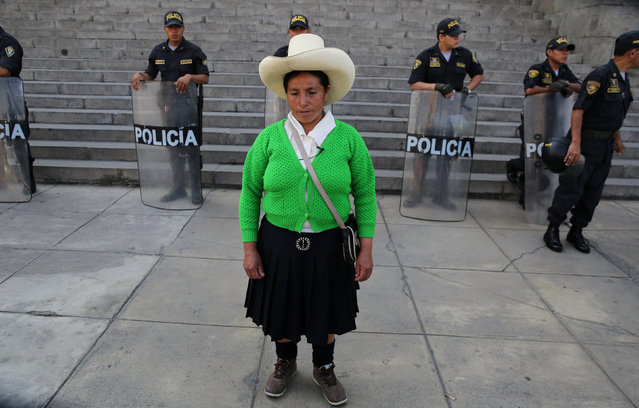 Peruvian farmer Maxima Acuna from northern Peruvian highlands of Cajamarca, leaves the Supreme Court during her trial against the Yanacocha copper and gold mine, at the Palace of Justice in Lima, Peru April 12, 2017. (Photo by Mariana Bazo/Reuters) 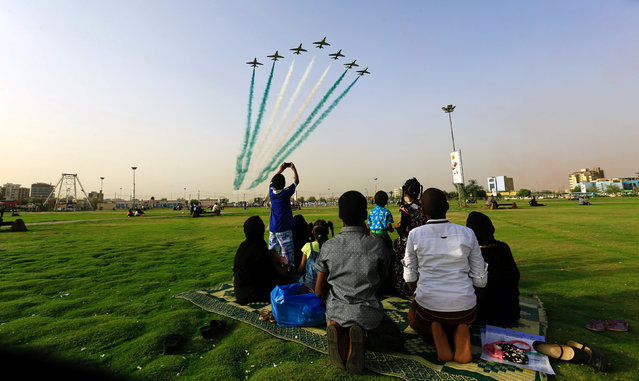 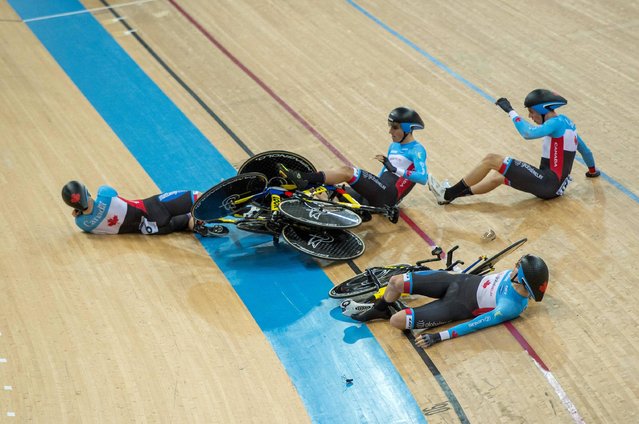 Riders of Canada crash during qualifying of the men's team pursuit event at the Hong Kong Velodrome during the Track Cycling World Championships in Hong Kong on April 12, 2017. (Photo by Jayne Russell/AFP Photo) 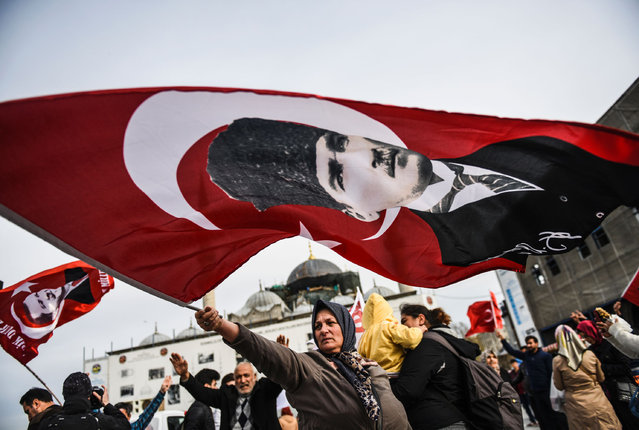 A Turkish woman supporting the “No” vote in the upcoming constitutional referendum campaign waves a Turkish flag with a picture of modern Turkey's founder Mustafa Kemal Ataturk in front of Yeni Camii on April 12, 2017 during a campaign rally for the “Yes” in Istanbul's Eminonu district. The Turkish public will vote on April 16, 2017 on whether to change the current parliamentary system into an executive presidency. (Photo by Bulent Kilic/AFP Photo) 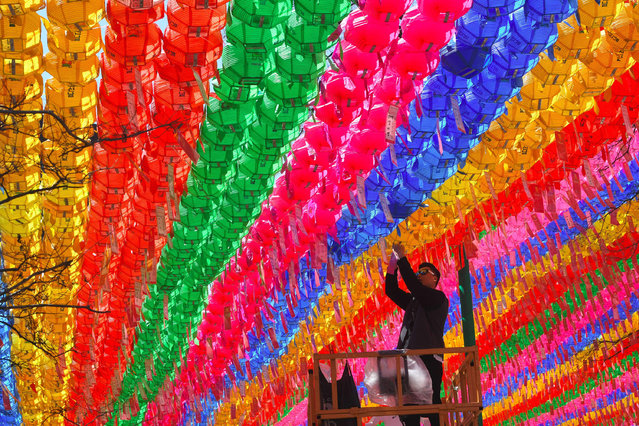 A South Korean worker attaches a name card with a wish of Buddhist followers to a lotus lantern at Jogye Temple in Seoul on April 12, 2017 ahead of celebrations marking Buddha's birthday in the country. The temple is decorated with thousands of colorful lanterns celebrating Buddha's upcoming birthday on May 3. 2017. (Photo by Jung Yeon-Je/AFP Photo) 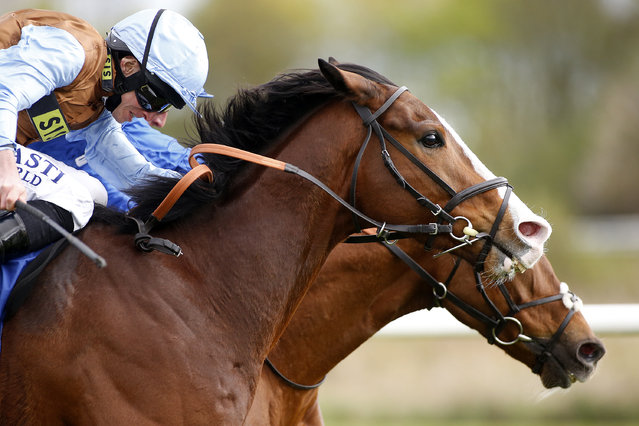 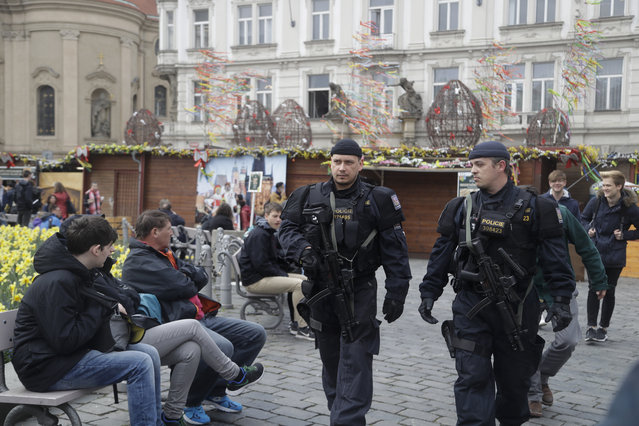 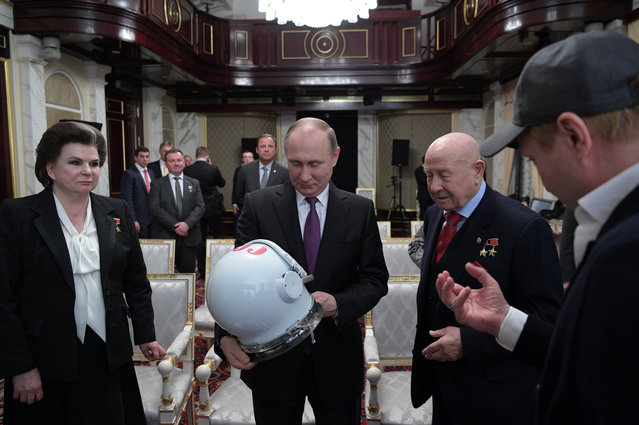 A photo made available on 12 April 2017 of Russian President Vladimir Putin (2-L) holding an old Russian space suit helmet as Russian cosmonaut veterans, former Soviet cosmonauts Alexei Leonov (2-R) and Valentina Tereshkova (L), and Russian actor and Artistic Director of the Theatre of Nations Yevgeny Mironov (R) look on during a screening of “The Spacewalker” movie at the Kremlin in Moscow, Russia, 11 April 2017. Valentina Tereshkova was the first ever woman in space, who piloted th Russian “Vostok 6” spacecraft on 16 June 1963. Leonov in March 1965 was the first man floating free in space for about 12 minutes while orbiting the earth during the Russian “Voskhod 2” mission. Russia marks the “Cosmonauts Day” on 12 April. (Photo by Alexei Druzhinin/EPA/Sputnik/Kremlin) 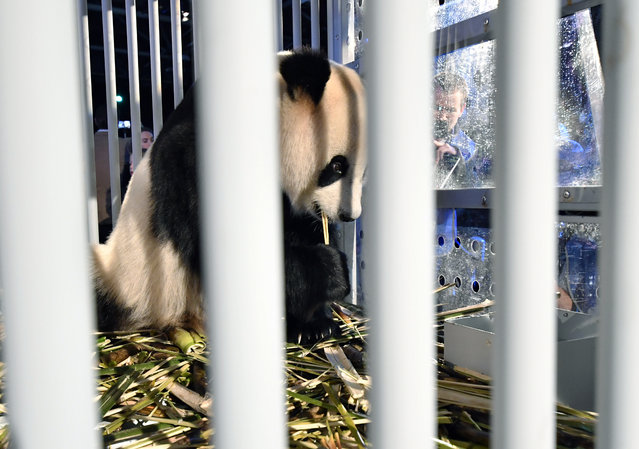 One of two giant pandas, female Wu Wen and male Xing Ya, is placed on display after arriving at Schiphol Airport in the Netherlands after a special flight from China Wednesday, April 12, 2017. The pair of three-and-half year old giant pandas are being taken from Schiphol Airport to the Ouwehands Zoo in the central Dutch town of Rhenen where they will settle into a purpose-built enclosure for a 15-year stay as part of a nature conservation project. (Photo by Patrick Post/AP Photo) 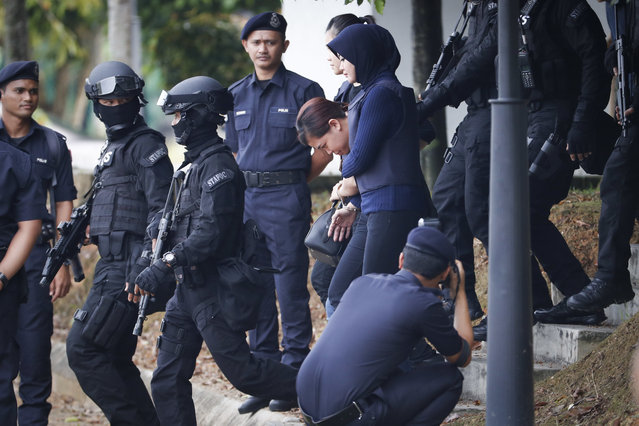 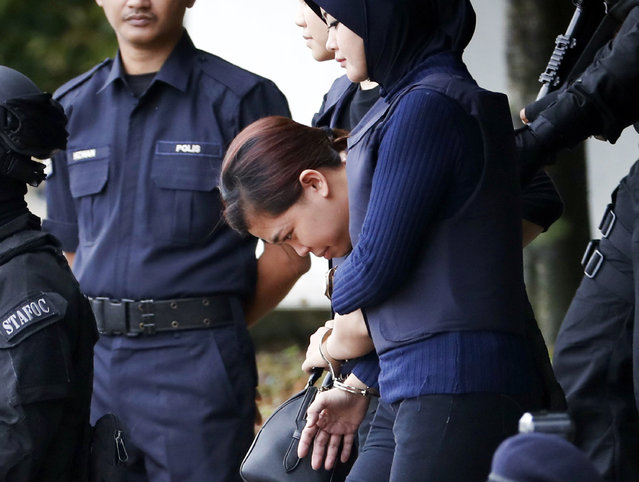 Indonesian suspect Siti Aisyah, center, arrested in the death of Kim Jong Nam, is escorted by police officers as she leaves at a court house in Sepang, Malaysia, Thursday, April 13, 2017. (Photo by Vincent Thian/AP Photo) 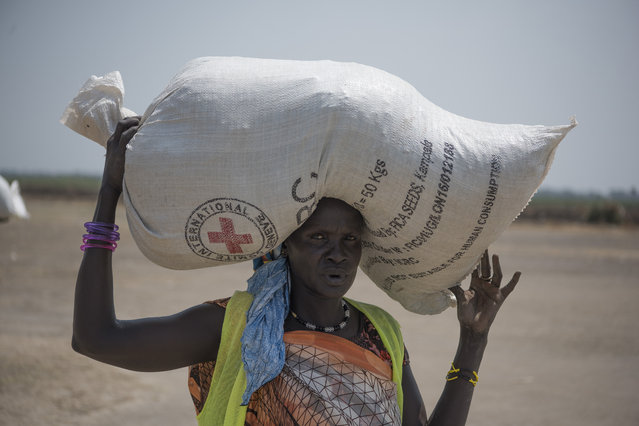 In this photo taken Tuesday, April 11, 2017, A woman walk back to her home after receiving food distributed by ICRC at a site in Leer County region of South Sudan. Two months after a famine was declared in two counties amid its civil war, hunger has become more widespread than expected, aid workers say, region on the brink of starvation and people at risk of dying without sustained food assistance. (Photo by AP Photo/Stringer) 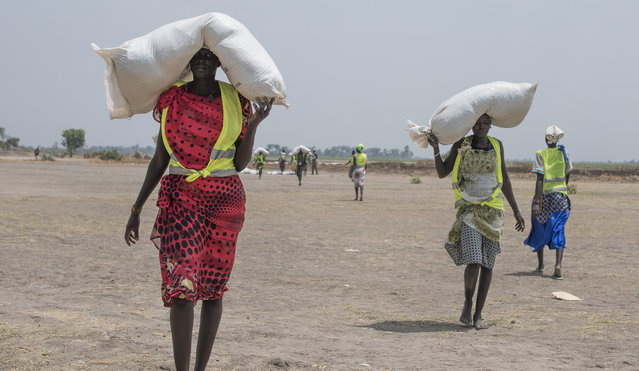 In this photo taken Tuesday, April 11, 2017, a women walk back to their homes after receiving food distributed by ICRC at a site in Leer County region of South Sudan. (Photo by AP Photo/Stringer) 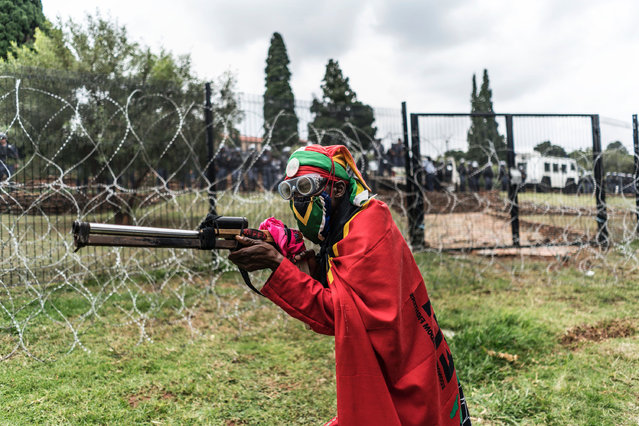