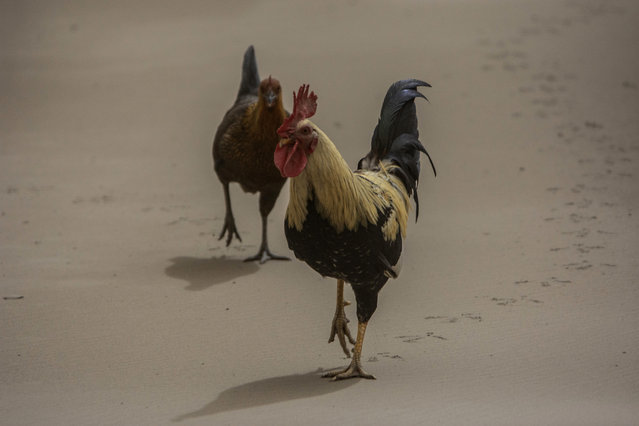 A rooster and a hen walk on the ash-covered main Black Rock road, from the St. Vincent eruption of La Soufriere volcano, on the outskirts of Bridgetown, Barbados, Sunday, April 11, 2021. La Soufriere volcano fired an enormous amount of ash and hot gas early Monday in the biggest explosive eruption yet since volcanic activity began on the eastern Caribbean island of St. Vincent late last week. (Photo by Chris Brandis/AP Photo) 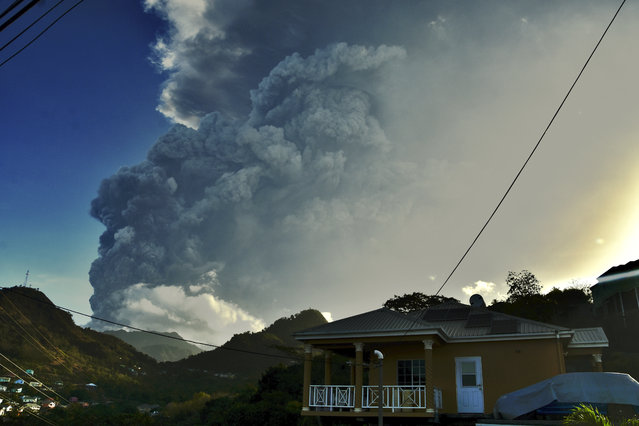 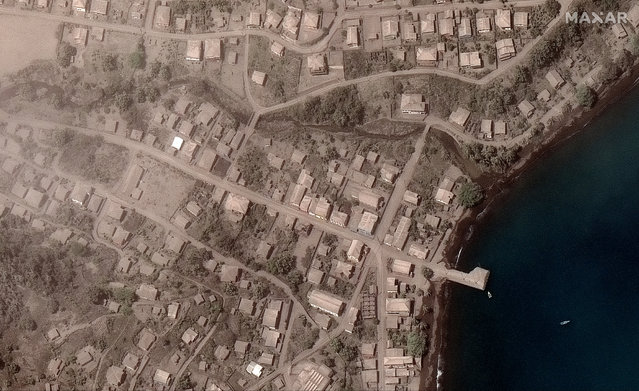 This image provided by Maxar Technologies shows the Richmond Vale waterfront covered in volcanic ash, in Chateaubelair, St. Vincent, Tuesday, April 13, 2021, a day after after another eruption of the La Soufriere volcano. The volcano fired an enormous amount of ash and hot gas early Monday in the biggest explosive eruption yet since volcanic activity began on the eastern Caribbean island late last week. (Photo by Satellite image ©2021 Maxar Technologies via AP Photo) 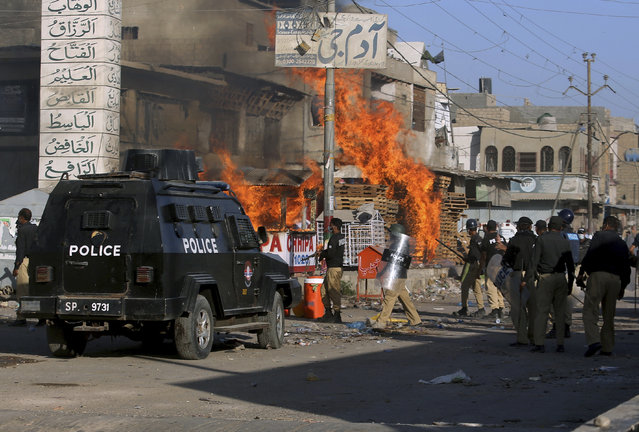 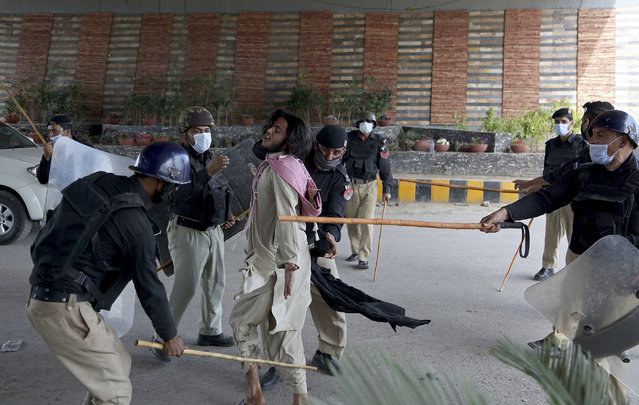 Police officers hit a supporter of Tehreek-e-Labiak Pakistan, a radical Islamist political party, before detain him at a protest against the arrest of their party leader, Saad Rizvi, in Peshawar, Pakistan, Tuesday, April 13, 2021. Two demonstrators and a policeman were killed Tuesday in violent clashes between Islamists and police in Pakistan, hours after authorities arrested Rizvi in the eastern city of Lahore, a senior official and local media reported. (Photo by Muhammad Sajjad/AP Photo) 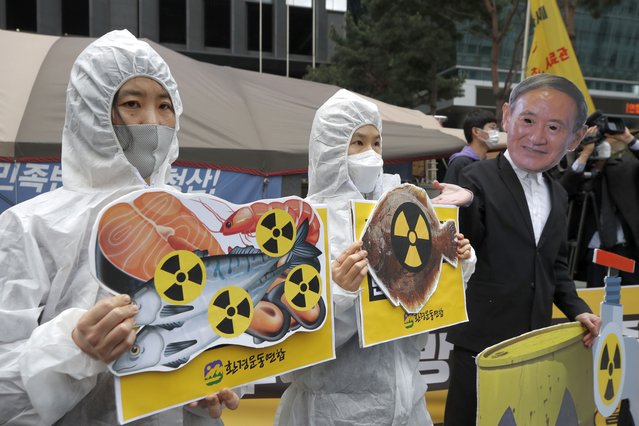 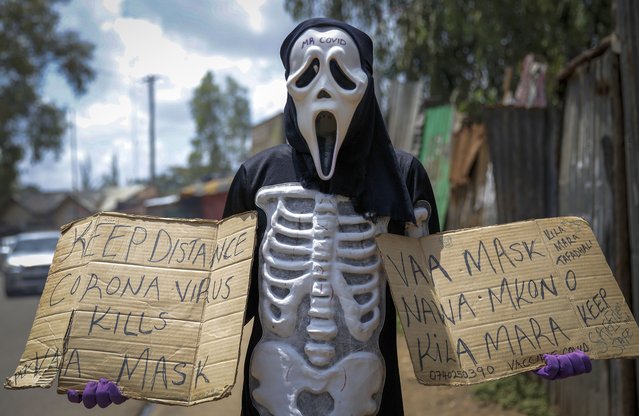 James Kiriva, 35, who took the initiative to educate his community about the importance of taking precautions to curb the spread of the coronavirus and COVID-19, walks around dressed as a skeleton to spread his message in English and Swahili in the Kibera low-income neighborhood of Nairobi, Kenya Tuesday, April 13, 2021. (Photo by Brian Inganga/AP Photo) 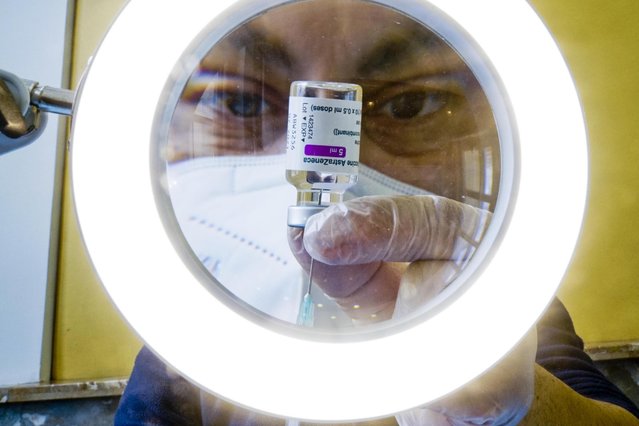 A health worker prepares to administer a dose of AstraZeneca COVID-19 vaccine at a vaccination hub in Naples, Campania, Italy, 13 April 2021. Over one million doses have been injected in Campania so far. (Photo by Ciro Fusco/EPA/EFE) 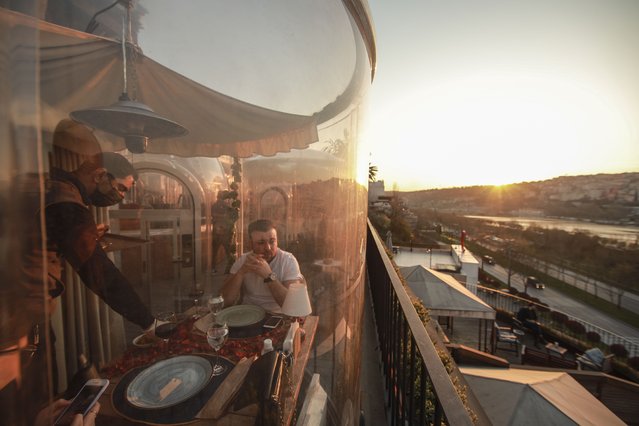 A waiter serves customers enjoying their dinner specially constructed domes to ensure social distancing as a way to help stop the spread of the coronavirus, at a restaurant in Istanbul, Monday, April 12, 2021. Turkey has been posting record-high single-day COVID-19 cases for the past 10 days.Keen to minimise repercussions on its ailing economy and under intense pressure by services industry, Turkey's President Recep Tayyip Erdogan eased COVID-19 measures in early March. With the spike, he was forced to announce renewed restrictions, such as weekend lockdowns and the closure of cafes and restaurants during Ramadan, the holy Muslim month, starting on April 13. (Photo by Emrah Gurel/AP Photo) 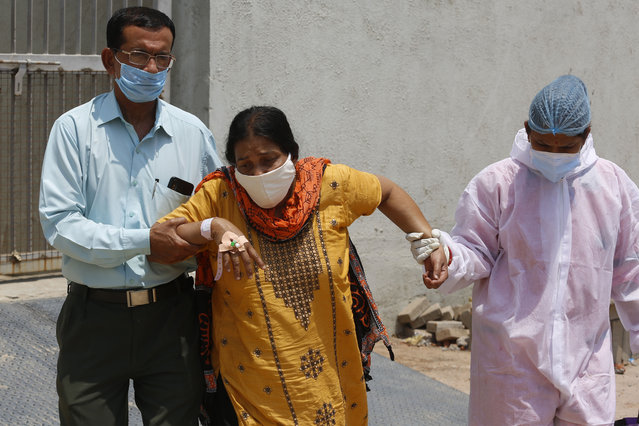 A health worker, right, and a relative helps a patient shift her from a dedicated COVID hospital to another hospital to vacate the bed for new patients, at Civil hospital in Ahmedabad, India, Tuesday, April 13, 2021. New infections have surged in the past month and India has now reported over 13.6 million cases, pushing its toll past Brazil, and making it second only to the United States. In the past 24 hours, over 160,000 new infections have been detected and experts fear that the worst is yet to come. (Photo by Ajit Solanki/AP Photo) 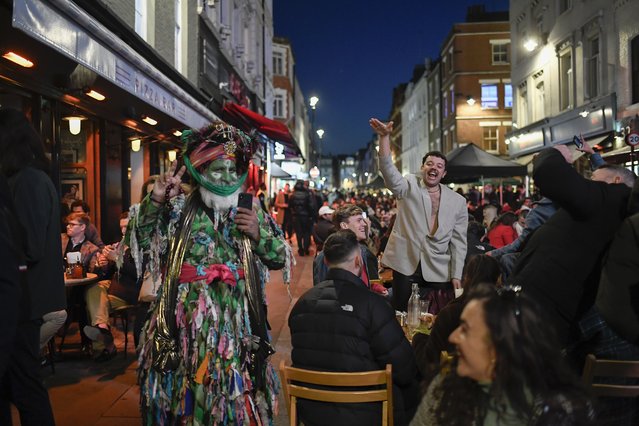 People sit at setup tables outside pubs in Soho, in London, on the day some of England's third coronavirus lockdown restrictions were eased by the British government, Monday, April 12, 2021. Pubs, shops and hairdressers have opened as lockdown restrictions are eased Monday. (Photo by Alberto Pezzali/AP Photo) 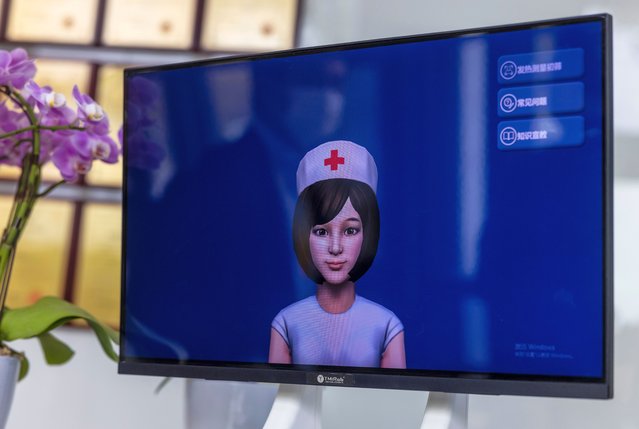 A medical AI robot screen is seen in the TMiRob company in Shanghai, China, 13 April 2021. TMiRob, Tami Robotics Technology Co. Ltd is the first Chinese high-tech company to provide intelligent robot solutions for the fields of healthcare. Well-known investors, including the Chinese Academy of Science Holdings, IDG, GPCapital, SPINOTEC, Ecovacs, have been invested in TMiRob during the first three years of its founding. (Photo by Alex Plavevski/EPA/EFE) 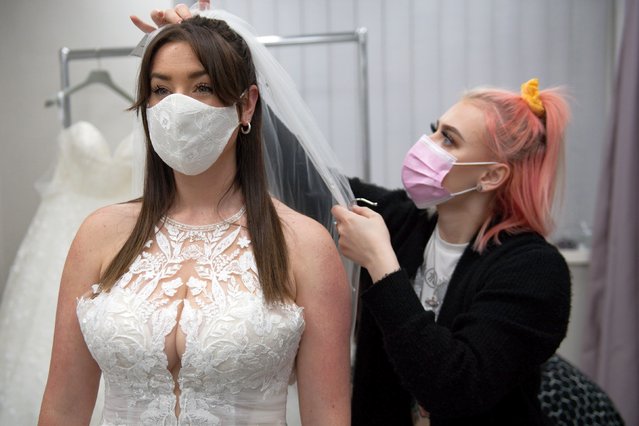 Bride-to-be Erin Barwell tries on dresses on Tuesday, April 13, 2021 for the first time since non-essential retailers reopened this week. Erin, from Stoke-on-Trent, is due to get married next February and tried on dresses at Roberta's Bridal in Burslem, Stoke-on-Trent, following the further easing of lockdown restrictions in England. (Photo by Jacob King/PA Images via Getty Images) 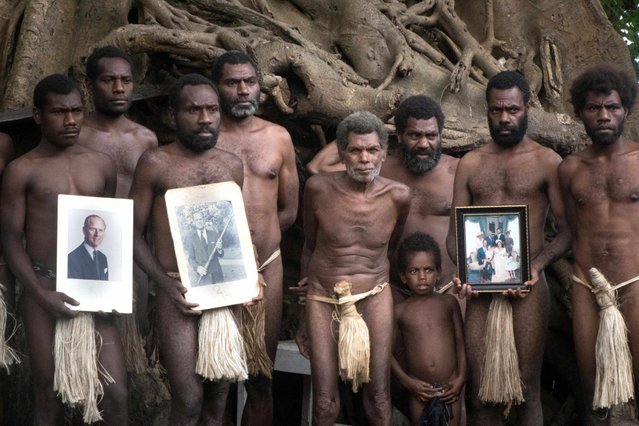 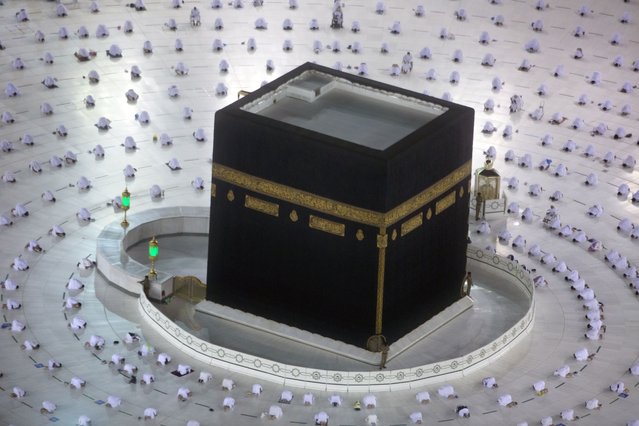 Muslims pray during the first dawn prayers of the Islamic holy month of Ramadan, around the Kaaba, the cubic building at the Grand Mosque, as they keep social distancing to help curb the spread of the coronavirus, in the Muslim holy city of Mecca, Saudi Arabia, Tuesday, April 13, 2021. During Ramadan, the holiest month in Islamic calendar, Muslims refrain from eating, drinking, smoking and s*x from dawn to dusk. (Photo by Amr Nabil/AP Photo) 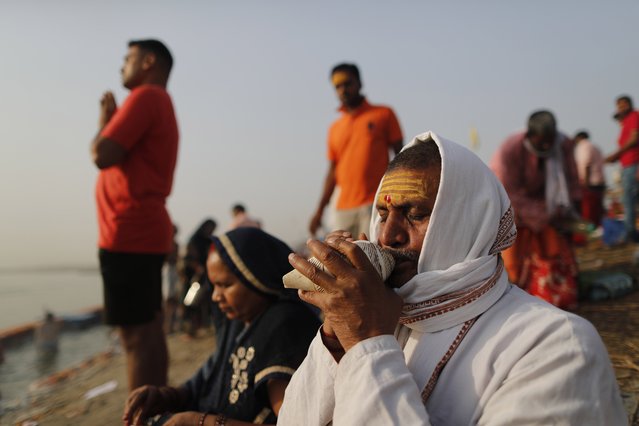 Hindu devotees perform morning rituals at Sangam, the confluence of the rivers Ganges and Yamuna, on the first day of Navratri festival at Prayagraj, in the northern Indian state of Uttar Pradesh, India, Tuesday, April 13, 2021. Navaratri lasts for nine days, with three days each devoted to the worship of the goddess of valor Durga, the goddess of wealth Lakshmi, and the goddess of knowledge Saraswati. (Photo by Rajesh Kumar Singh/AP Photo) 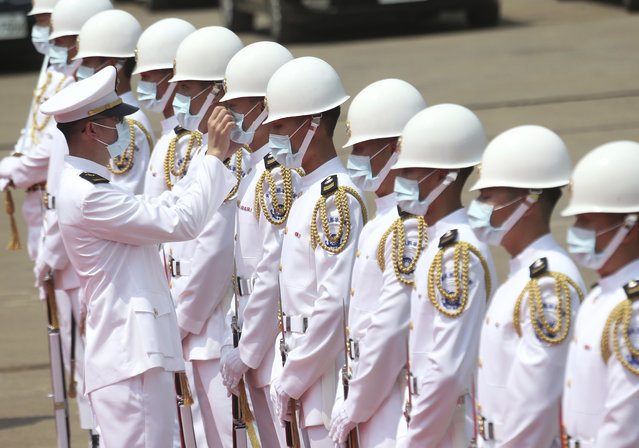 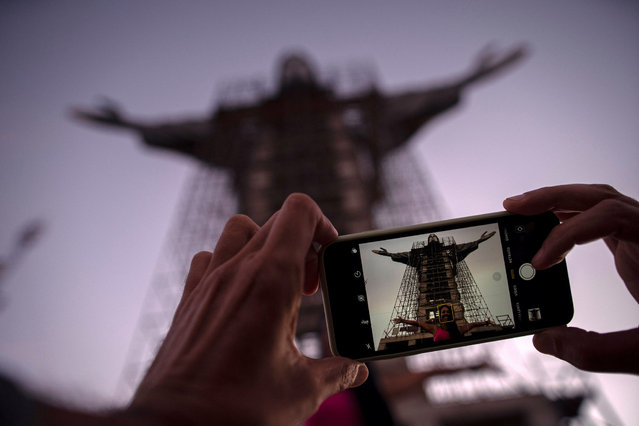 A person takes pictures next to the Cristo Protector statue, under construction in Encantado, Rio Grande do Sul, Brazil, 12 April 2021 (issued 13 April 2021). On a hill in southern Brazil, the skeleton of a huge statue has been growing for a little over a year. It is the so-called Cristo Protector, a 43-meter high monument that aims to combine religious devotion and the promotion of tourism. This statue is promoted as one of the 'largest in the world' in honour of Jesus of Nazareth, after a similar one inaugurated in 2010 in the Polish city of Swiebodzin, which measures 52 meters, and as 'the tallest in Brazil' with five meters more than the Cristo Redentor of Rio de Janeiro. (Photo by Daniel Marenco/EPA/EFE) 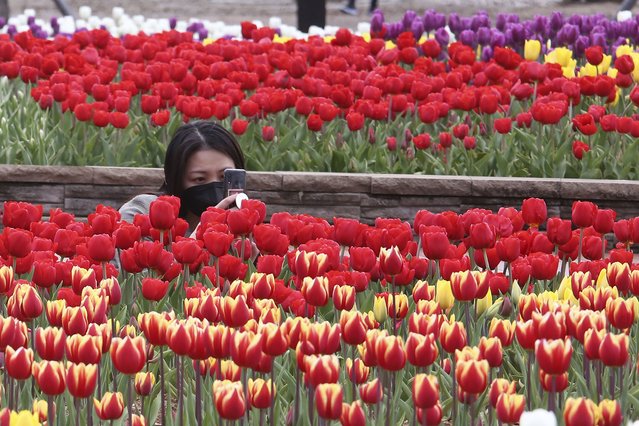 A woman wearing a face mask as a precaution against the coronavirus takes pictures of tulips at a park in Goyang, South Korea, Tuesday, April 13, 2021. (Photo by Ahn Young-joon/AP Photo) 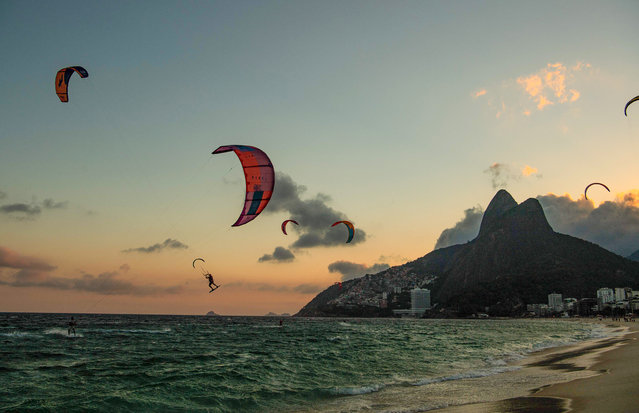 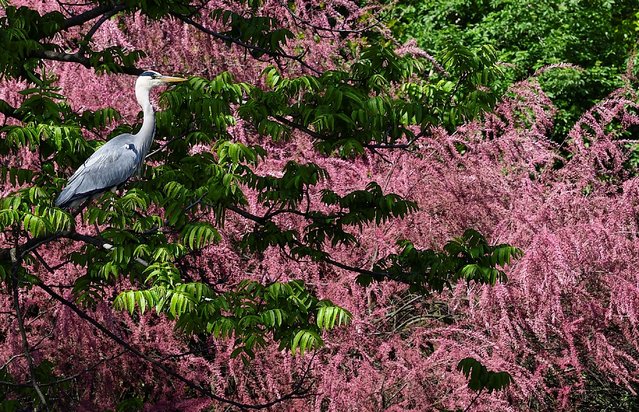