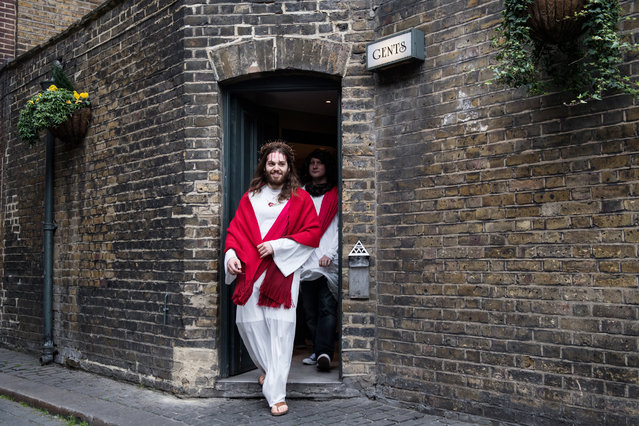 Luigi Pertrilli walks out of a public toilet during the Christathon X pub crawl on April 16, 2017 in London, England. The Christathon pub crawl is celebrating its tenth year this year and sees participants dress as Jesus and visit pubs on Easter Sunday around the British capital whilst donating collections from those involved to the charity Save the Children. (Photo by Chris J. Ratcliffe/Getty Images) 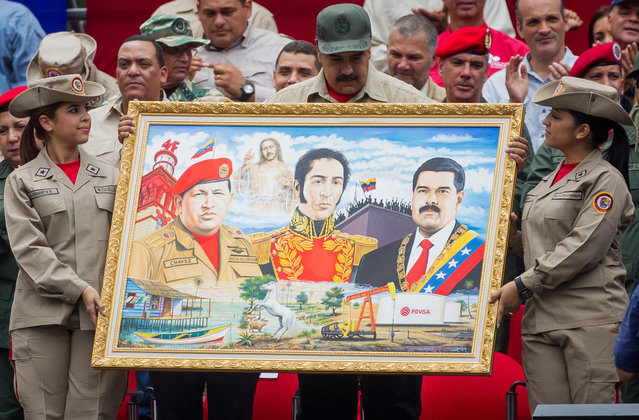 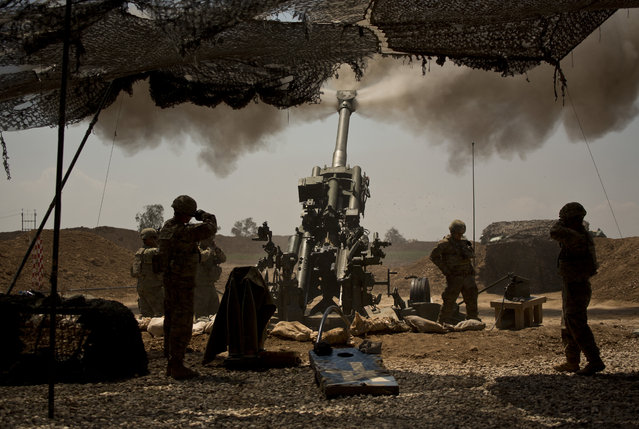 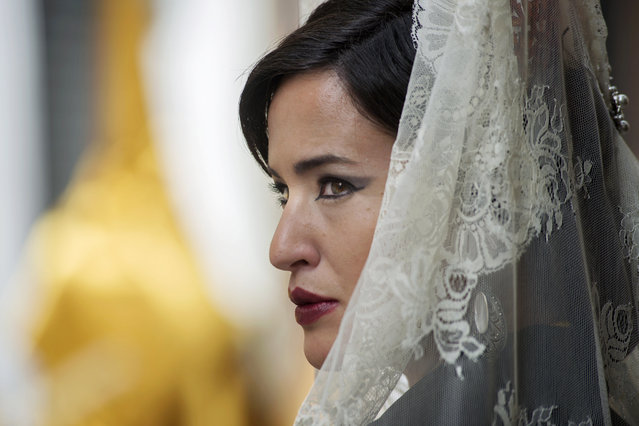 A faithful wearing a white 'mantilla' over her head takes part in a procession on Easter Sunday in Jaen, Andalusia, southern Spain, 16 April 2017. On Easter Sunday, the women use white mantillas instead of black ones, which are used the previous days of Holy Week, to celebrate the Christ Resurrection. Easter is celebrated around the world by Christians to mark the resurrection of Jesus from the dead and the foundation of the Christian faith. (Photo by Jose Manuel Pedrosa/EPA) 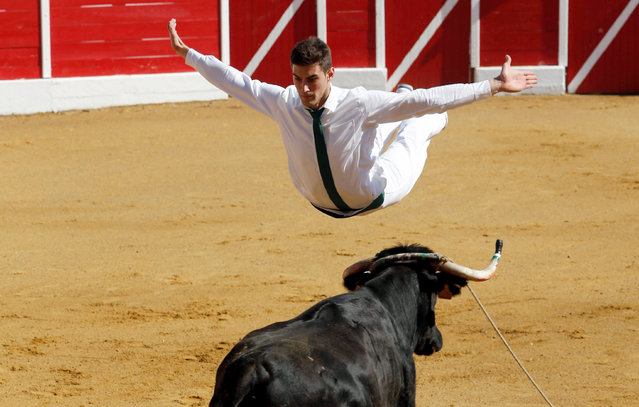 A competitor jumps over a cow during a Course landaise (cow race) in the Landes region in Aignan, France, April 17, 2017. (Photo by Regis Duvignau/Reuters) 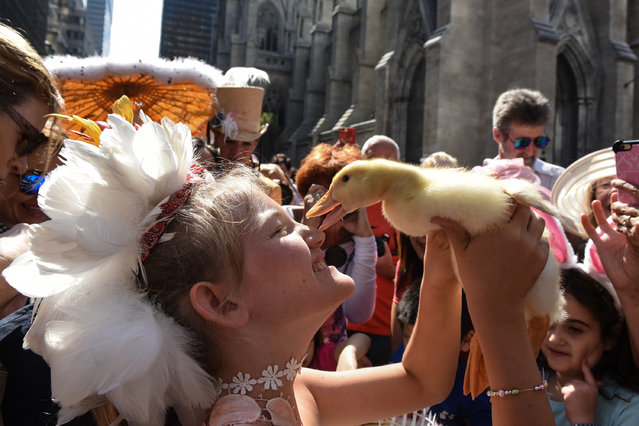 A woman holds a duck while wearing a fanciful hat during the Easter Parade and Bonnet Festival along 5th Avenue on April 16, 2017 in New York City. The pageant is an annual tradition that stretches back to the 1870s. (Photo by Stephanie Keith/Getty Images) 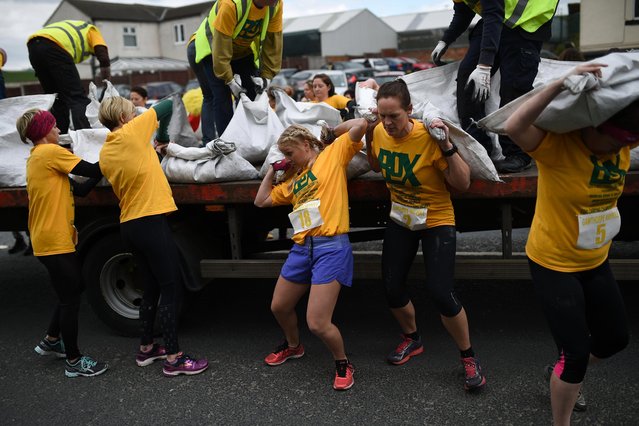 Competitors take part in the Women' s Race at the annual World Coal Carrying Championships in the village of Gawthorpe, near Wakefield, northern England on April 17, 2017. The World Coal Carrying Championships, which began in 1963, takes place on Easter Monday and challenges participants to race with a sack of coal for just over one kilometre to secure the best time. The event features Men' s, Women' s and Children' s races with Men carrying 50 kg of coal and women 20 kg in weight. To finish the sack of coal must be dropped on the Village Green where the traditional Maypole is situated in the heart of Gawthorpe. (Photo by Oli Scarff/AFP Photo) 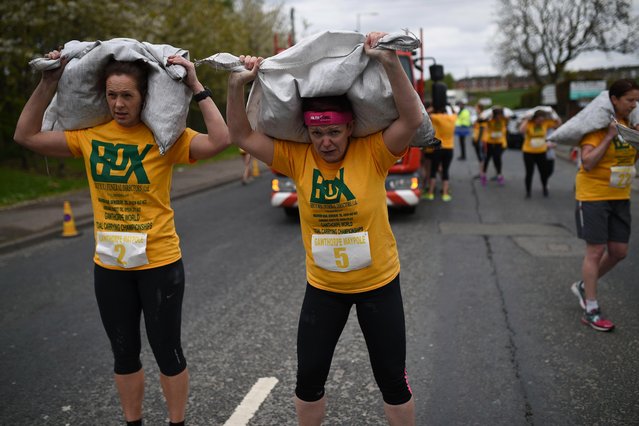 Competitors take part in the Women' s Race at the annual World Coal Carrying Championships in the village of Gawthorpe, near Wakefield, northern England on April 17, 2017. (Photo by Oli Scarff/AFP Photo) 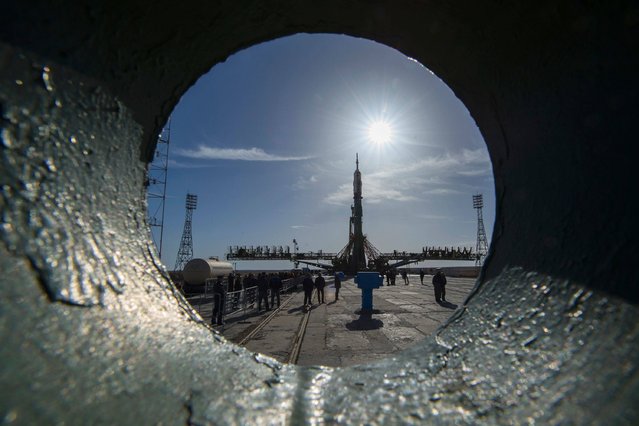 Service towers move towards the Soyuz MS-04 spacecraft lifted on the launch pad at the Russian-leased Baikonur cosmodrome in Kazakhstan on April 17, 2017. Russian cosmonaut Fyodor Yurchikhin and NASA astronaut Jack David Fischer are scheduled to blast off to the International Space Station (ISS) from the Baikonur cosmodrome on April 20. (Photo by AFP Photo/Stringer) 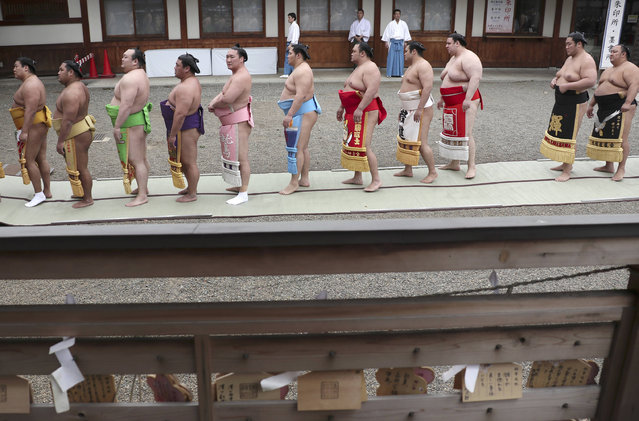 Sumo wrestlers stand in a line to offer prayers at the Yasukuni Shrine before the ritual sumo bouts held at the Shinto shrine in Tokyo, Monday, April 17, 2017. (Photo by Shizuo Kambayashi/AP Photo) 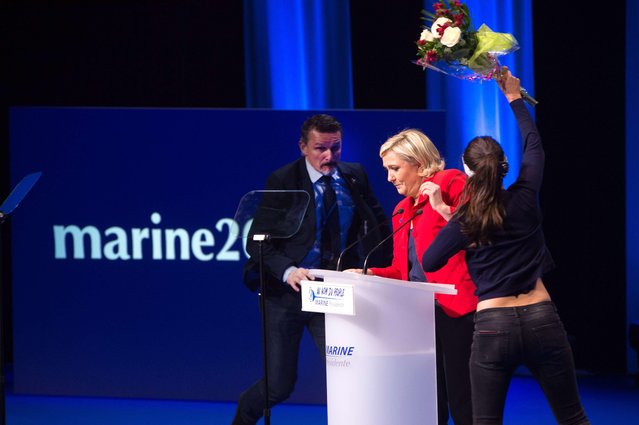 A Femen attack Marine Le Pen as she delivers a speech during french presidential far-right candidate speech during a campaign rally at Zenith on April 17, 2017 in Paris, France. (Photo by Laurent Chamussy/SIPA Press/Rex Features/Shutterstock) 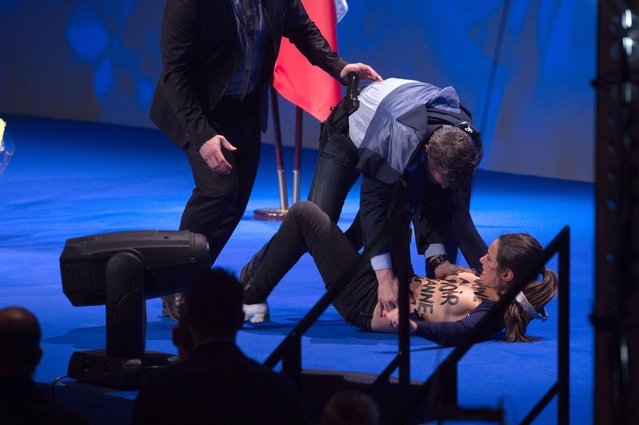 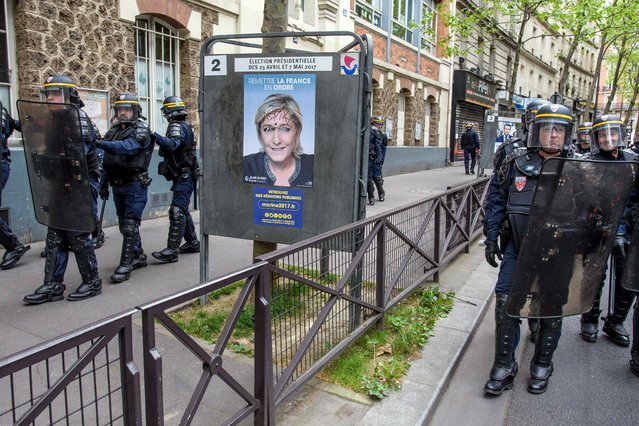 French police forces march next to a Marine Le Pen's campaign poster during a protest against far-right Front National (FN) party in Paris, France, 16 April 2017. The demonstration was organised by leftist associations against Front National candidate Marine Le Pen and her political meeting held in Paris on 17 April 2017. France holds the first round of the 2017 presidential elections on 23 April 2017. (Photo by Christophe Petit Tesson/EPA) 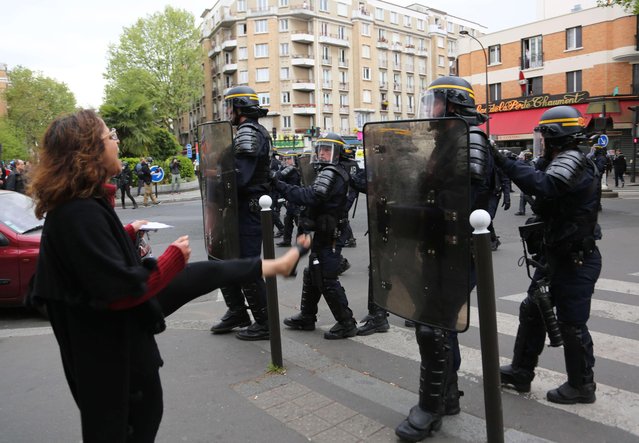 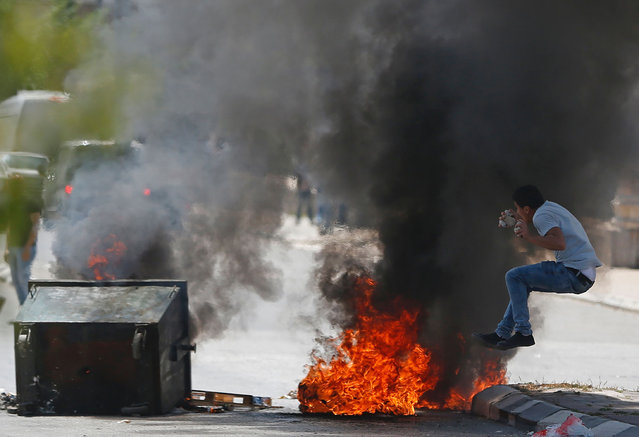 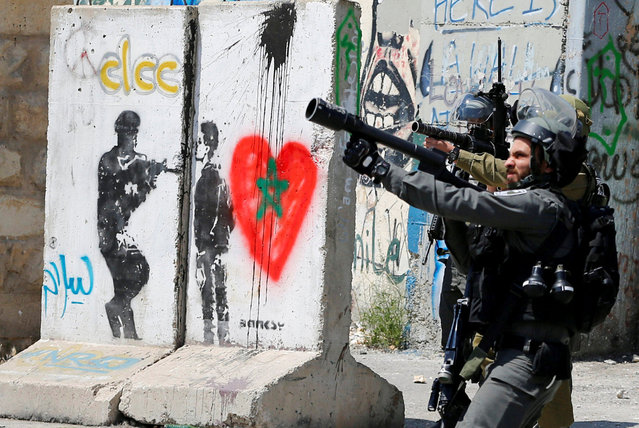 Israeli forces take position during clashes with Palestinian protesters following a protest in solidarity with Palestinian prisoners held by Israel, in the West Bank town of Bethlehem April 17, 2017. (Photo by Ammar Awad/Reuters) 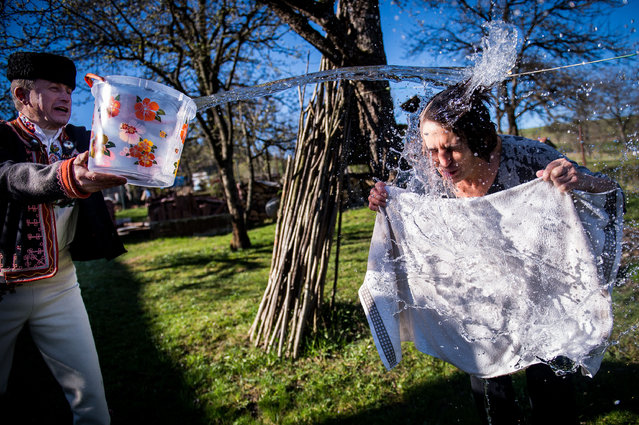 A man dressed in traditional costumes pours water over woman as part of Easter celebrations in the village of Strelniky, central Slovakia on April 16, 2017. Slovakia's men splash women with water to symbolize youth, strength and beauty for the upcoming spring season. (Photo by Vladimir Simicek/AFP Photo) 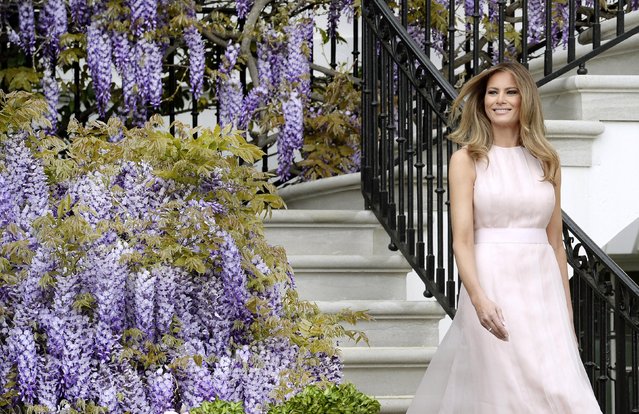 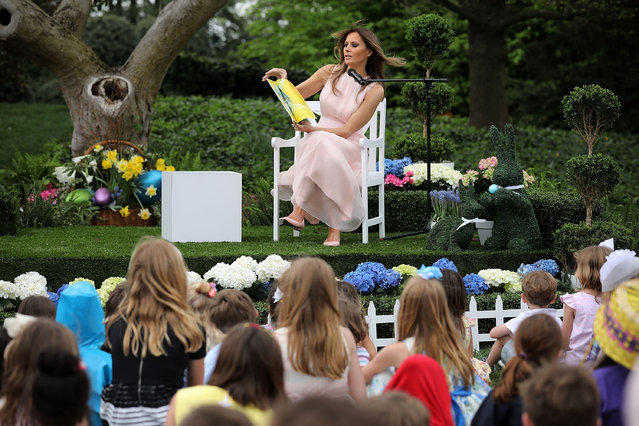 U.S. first lady Melania Trump reads 'Party Animals' by Kathy Lee Gifford during the 139th Easter Egg Roll on the South Lawn of the White House April 17, 2017 in Washington, DC. The White House said 21,000 people are expected to attend the annual tradition of rolling colored eggs down the White House lawn that was started by President Rutherford B. Hayes in 1878. (Photo by Chip Somodevilla/Getty Images) 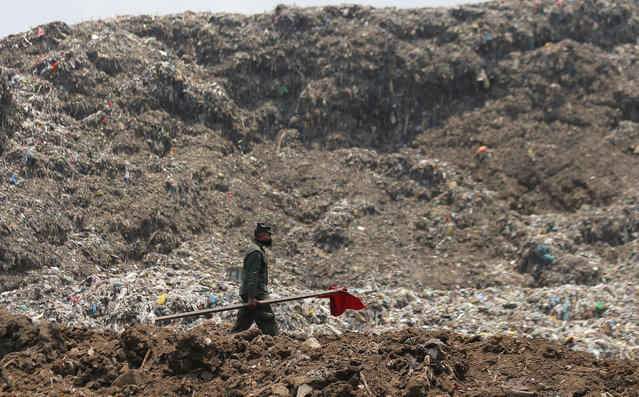 A Sri Lankan army soldier walks to erect red flags to demarcate danger zones following the collapse of a garbage mound in Meetotamulla, on the outskirts of Colombo, Sri Lanka, Colombo, Sri Lanka, Monday, April 17, 2017. Rescuers on Monday were digging through heaps of mud and trash that collapsed onto a clutch of homes near a garbage dump outside Sri Lanka's capital, killing dozens and possibly burying dozens more. (Photo by Eranga Jayawardena/AP Photo) 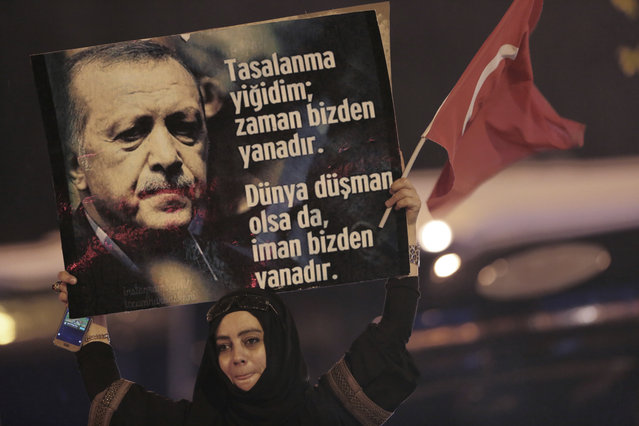 A supporter of President Recep Tayyip Erdogan holds a placard that reads “don't worry, the world can be our enemy ” in Ankara, Turkey, late Sunday, April 16, 2017. President Erdogan won a historic referendum Sunday that will greatly expand the powers of his office, although opposition parties questioned the outcome and said they would challenge the results. ( Photo by Burhan Ozbilici/AP Photo) 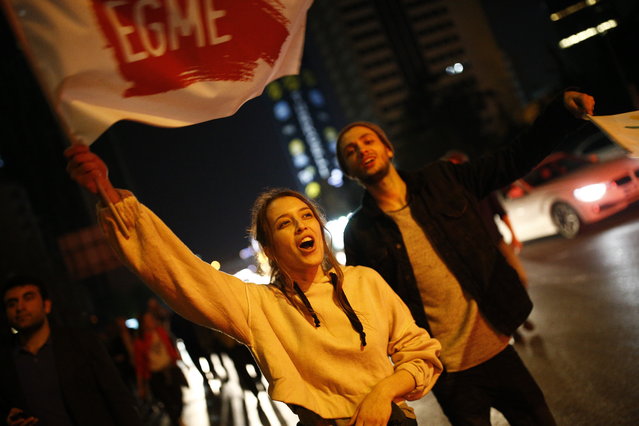 Supporters of pro-“no” vote chant slogans as they protest against the referendum outcome, in Istanbul, early Monday, April 17, 2017. Hundreds of demonstrators marched in a central neighbourhood in Istanbul, clanking pots and pans and chanting “this is just the beginning, the struggle will continue”. (Photo by Emrah Gurel/AP Photo) 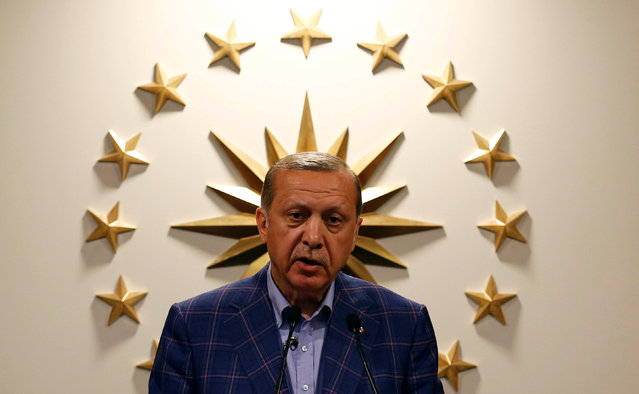 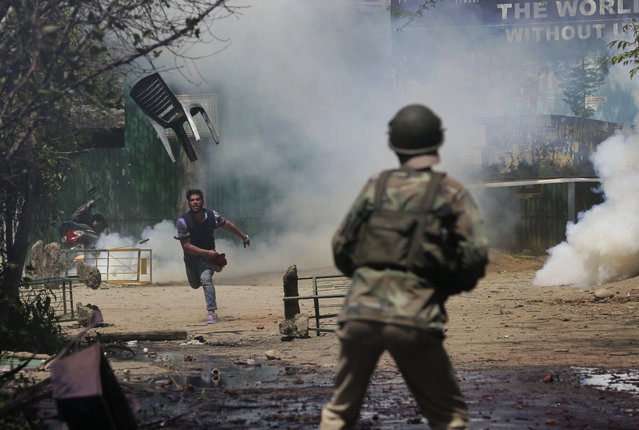 A Kashmiri student throws a chair on Indian policemen as they clash in Srinagar, Indian controlled Kashmir, Monday, April 17, 2017. The clashes on Monday began in Srinagar when hundreds of college students took to the streets to protest a police raid in a college in southern Pulwama town over the weekend, in which at least 50 students were injured. (Photo by Mukhtar Khan/AP Photo) 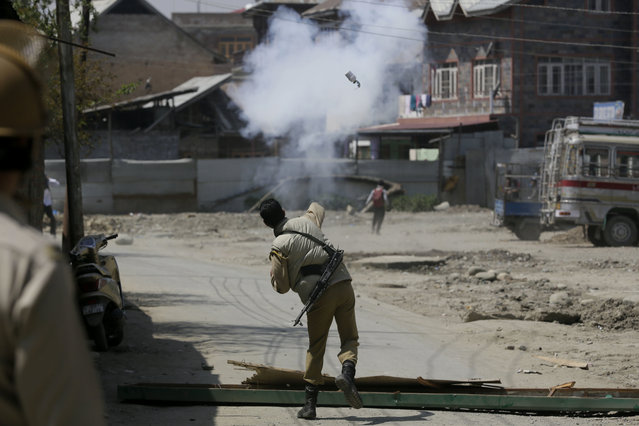 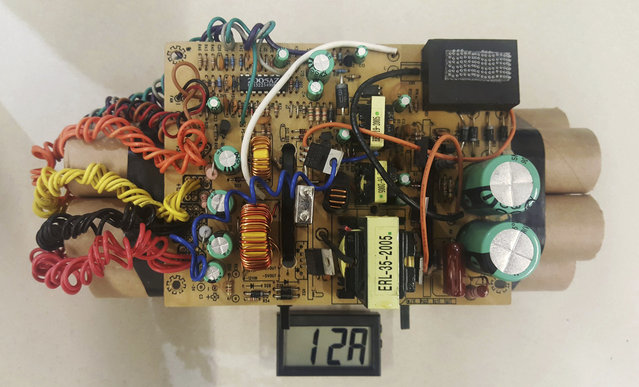 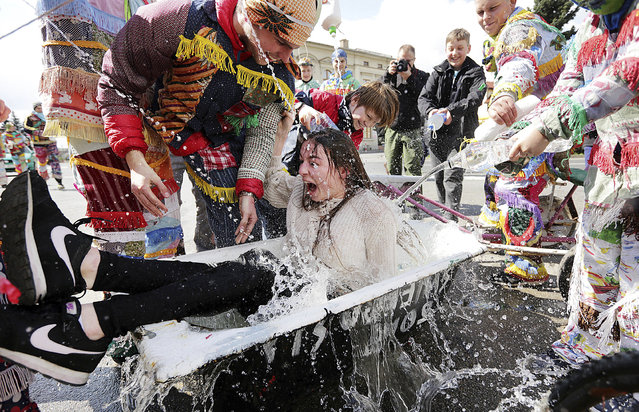