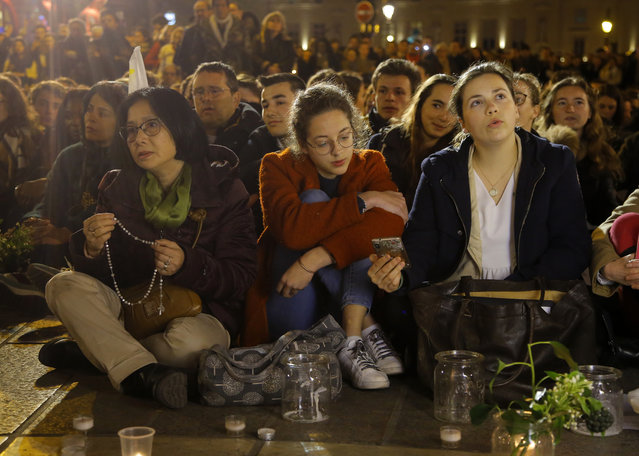 People attend a vigil in Paris, Tuesday April 16, 2019. Firefighters declared success Tuesday in a more than 12-hour battle to extinguish an inferno engulfing Paris' iconic Notre Dame cathedral that claimed its spire and roof, but spared its bell towers and the purported Crown of Christ. (Photo by Michel Euler/AP Photo) 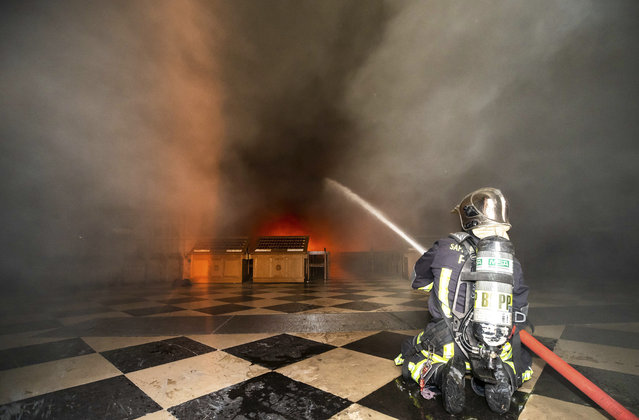 This photo provided Tuesday April 16, 2019 by the Paris Fire Brigade shows fire fighters spraying water inside Notre Dame cathedral, Monday April 15, 2019. An inferno that raged through Notre Dame Cathedral for more than 12 hours destroyed its spire and its roof but spared its twin medieval bell towers, and a frantic rescue effort saved the monument's “most precious treasures”, including the Crown of Thorns purportedly worn by Jesus, officials said Tuesday. (Photo by Benoit Moser/BSPP via AP Photo) 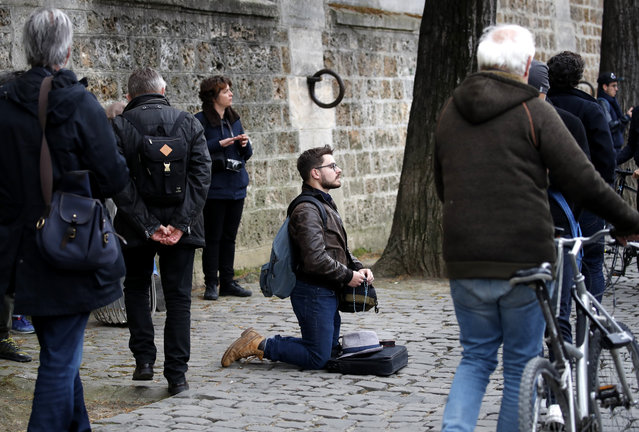 Man kneels as people came to watch and photograph the Notre Dame cathedral after the fire in Paris, Tuesday, April 16, 2019. Experts are assessing the blackened shell of Paris' iconic Notre Dame cathedral to establish next steps to save what remains after a devastating fire destroyed much of the almost 900-year-old building. With the fire that broke out Monday evening and quickly consumed the cathedral now under control, attention is turning to ensuring the structural integrity of the remaining building. (Photo by Christophe Ena/AP Photo) 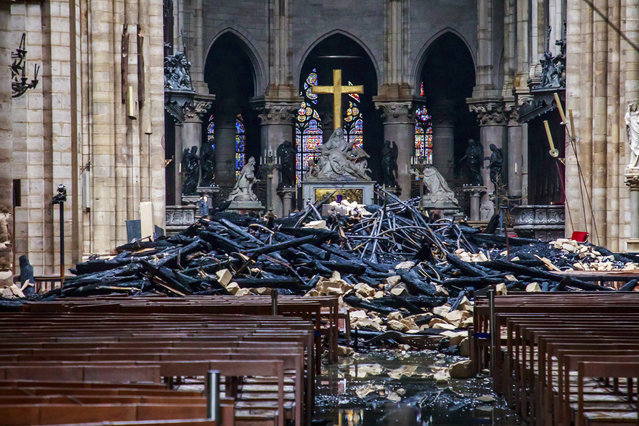 A hole is seen in the dome inside Notre Dame cathedral in Paris, Tuesday, April 16, 2019. Firefighters declared success Tuesday in a more than 12-hour battle to extinguish an inferno engulfing Paris' iconic Notre Dame cathedral that claimed its spire and roof, but spared its bell towers and the purported Crown of Christ. (Photo by Christophe Petit Tesson/Pool via AP Photo) 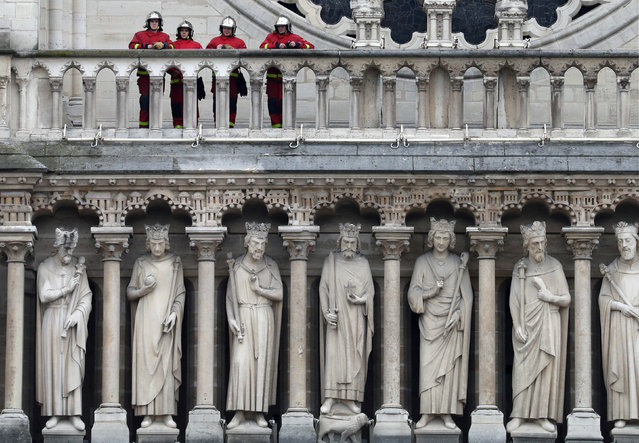 Firefighters work at Notre-Dame Cathedral after a massive fire devastated large parts of the gothic gem in Paris, France April 16, 2019. Firefighters declared success Tuesday in a more than 12-hour battle to extinguish an inferno engulfing Paris' iconic Notre Dame cathedral that claimed its spire and roof, but spared its bell towers and the purported Crown of Christ. (Photo by Yves Herman/Reuters) 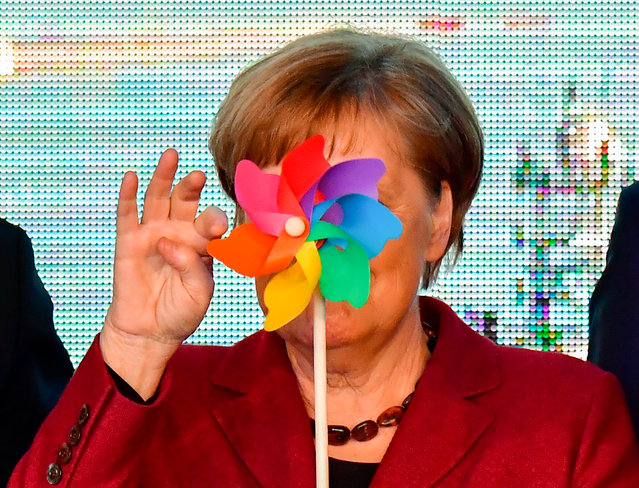 German Chancellor Angela Merkel is partly hidden by a toy wind wheel as she poses with children during the opening ceremony of the Arkona wind park in Sassnitz, northern Germany on April 16, 2019. German Chancellor Angela Merkel opens a massive wind farm by E.ON, the Arkona wind park, in the Baltic Sea, a key project for her country's “energy transition”. (Photo by Tobias Schwarz/AFP Photo) 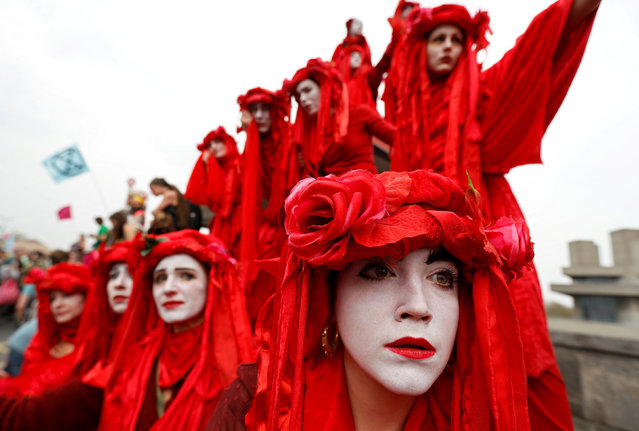 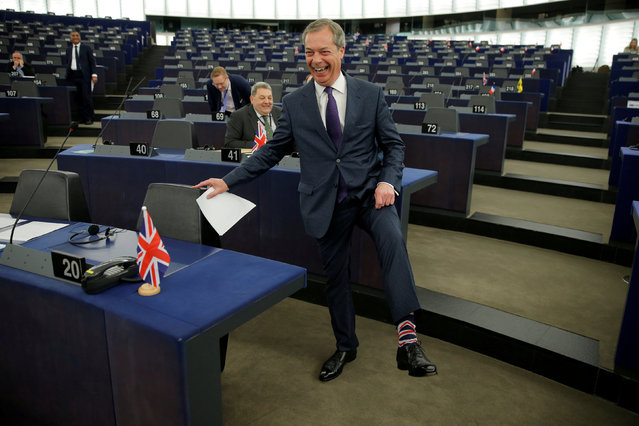 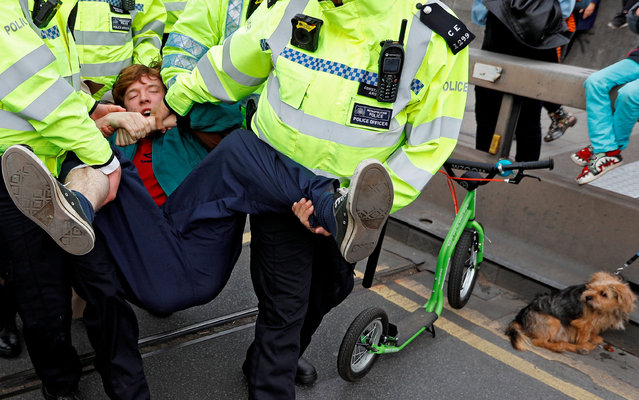 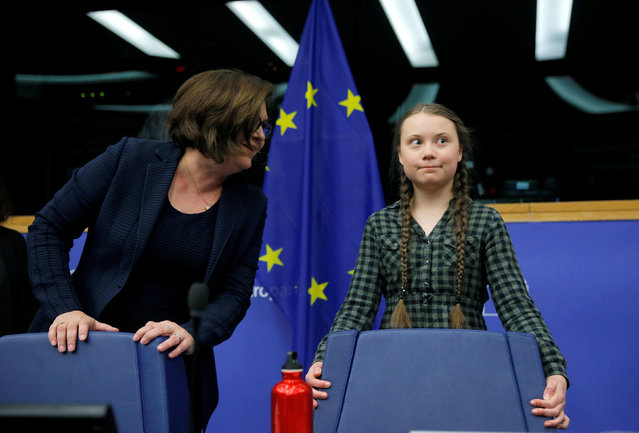 Swedish environmental activist Greta Thunberg arrives to deliver a speech during a meeting with the environment committee of the European Parliament in Strasbourg, April 16, 2019. (Photo by Vincent Kessler/Reuters) 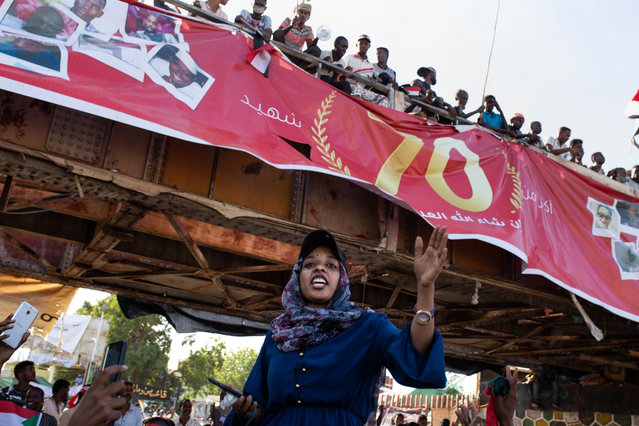 Demonstrators rally near the military headquarters in Khartoum, Sudan, Monday, April 15, 2019. The Sudanese protest movement on Monday welcomed the “positive steps” taken by the ruling military council, which held talks over the weekend with the opposition leaders and released some political prisoners. The praise came despite a brief incident earlier Monday where activists said soldiers attempted to disperse the ongoing protest sit-in outside the military headquarters in the capital, Khartoum, but eventually backed off. (Photo by Salih Basheer/AP Photo) 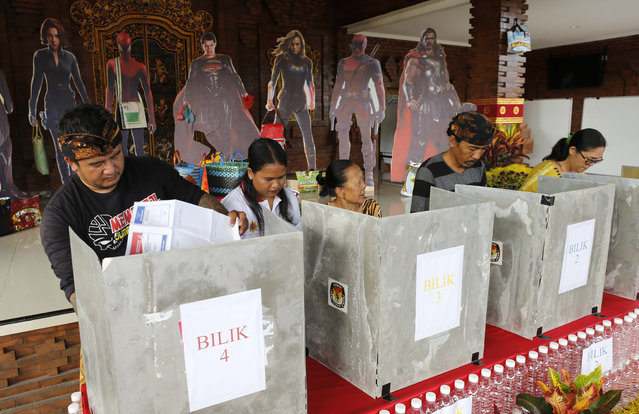 People cast their ballots in front of movie Avengers characters cutoutsvat a polling station during election in Bali, Indonesia on Wednesday, April 17, 2019. Voting is underway in Indonesia's presidential and legislative elections after a campaign that that pitted the moderate incumbent against an ultra-nationalist former general. (Photo by Firdia Lisnawati/AP Photo) 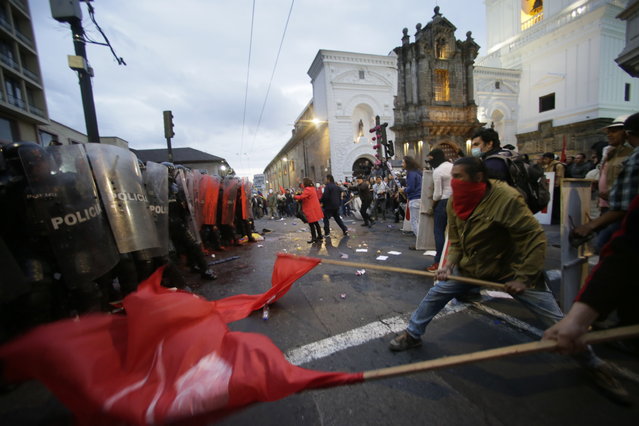 Protesters clash with police blocking them from advancing closer to the presidential palace in Quito, Ecuador, Tuesday, April 16, 2019. Protesters were demonstrating against the policies of President Lenin Moreno's government, including the recent firing of state workers, the taking of an IMF loan and the removal of Julian Assange's asylum status. (Photo by Dolores Ochoa/AP Photo) 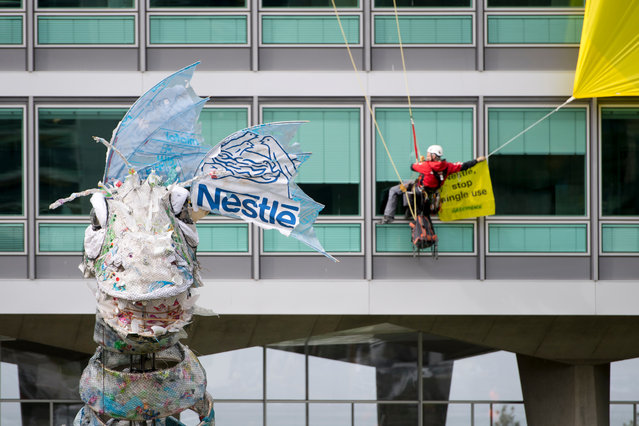 Greenpeace activists bring back to food and drinks giant Nestle a huge monster made of plastic recovered at sea and on the beaches by Greenpeace, in front of Nestle's headquarters in Vevey, Switzerland, 16 April 2019. The NGO denounced the pollution caused by single-use plastics that end up creating real continents of waste in the oceans. (Photo by Laurent Gilliéron/EPA/EFE) 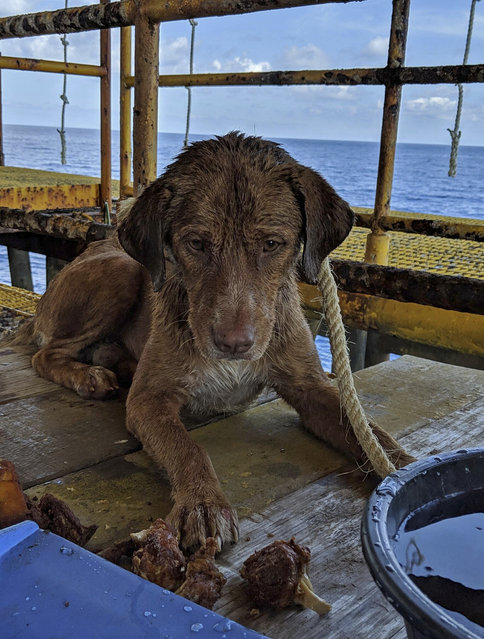 In this Friday, April 12, 2019, photo, a dog is being fed by an oil rig crew after the dog was rescued in the Gulf of Thailand. “Survivor” the dog is safely back on land after being found by oil rig workers swimming about 220 kilometers (135 miles) from shore in the Gulf of Thailand. Chevron Thailand worker Vitisak Payalaw posted on Facebook that the dog was sighted last Friday swimming toward the platform. Vitisak says the pup clung to the platform below deck without barking or whimpering. The workers think the dog fell off a fishing trawler. (Photo by Vitisak Payalaw via AP Photo) 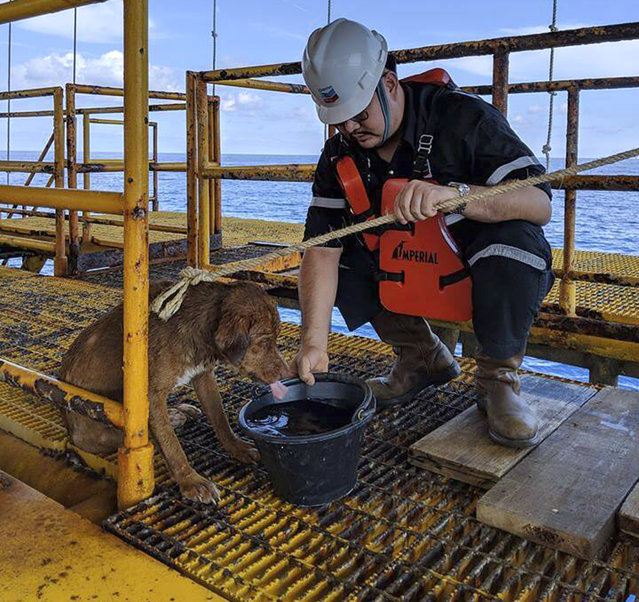 In this Friday, April 12, 2019, photo, a dog is taken care by an oil rig crew after being rescued in the Gulf of Thailand. (Photo by Vitisak Payalaw via AP Photo) 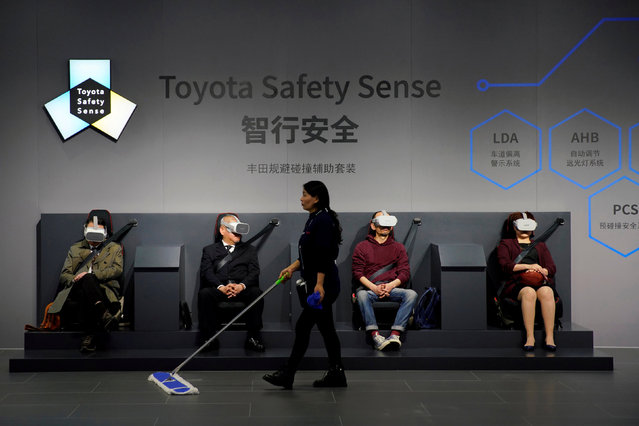 A cleaner walks past visitors wearing virtual reality (VR) goggles at a booth for Toyota Safety Sense during the media day for the Shanghai auto show in Shanghai, China April 16, 2019. (Photo by Aly Song/Reuters) 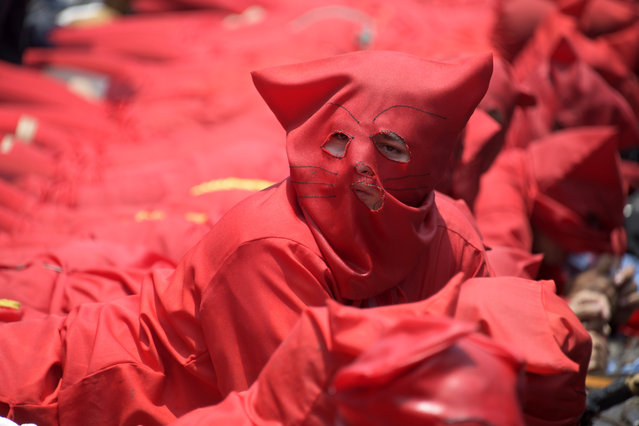 Faithfuls fancy dressed as “talciguines” -characters of the local folklore- take part in the celebration of an ancient local tradition that marks the start of Holy Week, in Texistepeque, some 80 km west of San Salvador, on April 15, 2019. Talciguines are devils who lash Catholic faithfuls to cleanse their sins. (Photo by Marvin Recinos/AFP Photo) 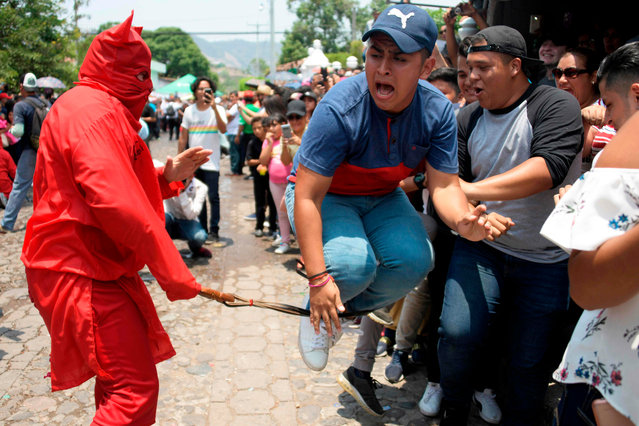 A Catholic faithful fancy dressed as a “talciguin” -character of the local folklore- takes part in the celebration of an ancient local tradition that marks the start of Holy Week, in Texistepeque, some 80 km west of San Salvador, on April 15, 2019. Talciguines are devils who “lash” Catholic faithfuls to cleanse their sins. (Photo by Marvin Recinos/AFP Photo) 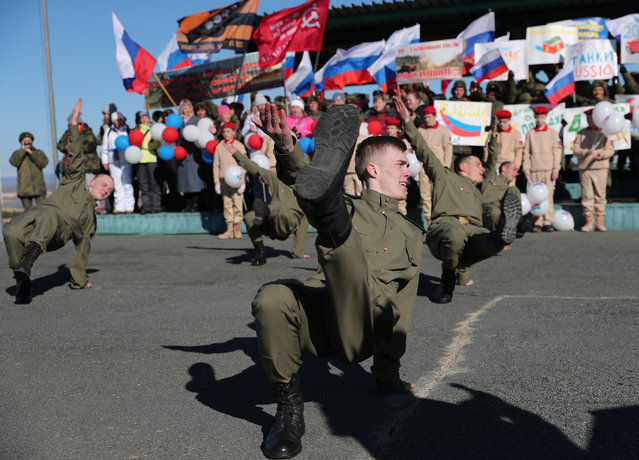 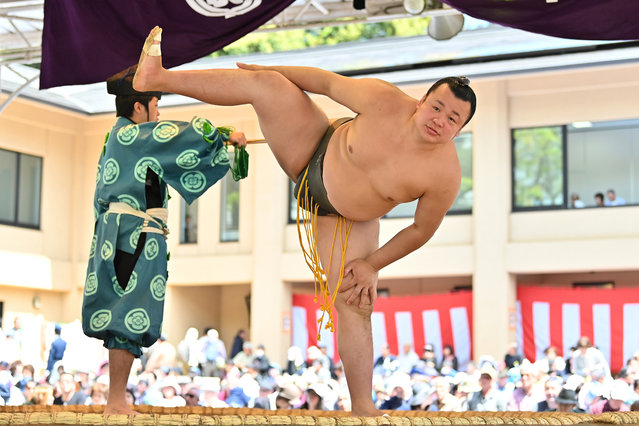 A sumo wrestler takes part in a “honozumo”, a ceremonial sumo exhibition, on the grounds of Yasukuni Shrine in Tokyo on April 15, 2019. Sumo's top wrestlers took part in an annual one-day exhibition for thousands of spectators within the shrine's precincts. (Photo by Charly Triballeau/AFP Photo) 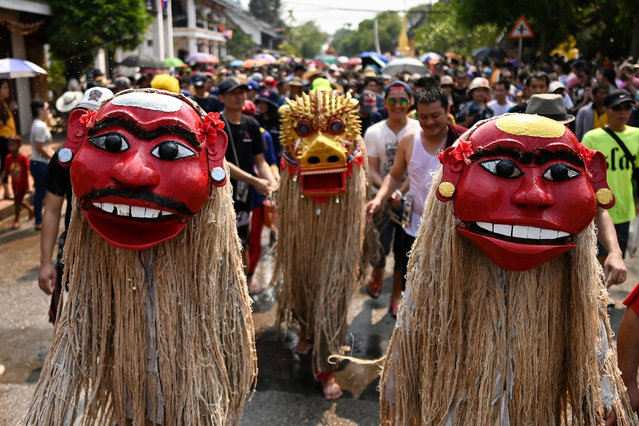 This photograph taken on April 15, 2019 shows men dressed as the legendary ancestors “Pou Nyer” and “Nyar Nyer” and their guardian lion “Singkheo Singkham” taking part in a procession to mark the Laos New Year or “Pi Mai” celebrations to the Wat Xiengthong Buddhist temple in Luang Prabang. Barefoot and cloaked in swinging bamboo ropes, Laos' legendary masked “ancestor” duo walk the streets of Luang Prabang for their annual outing for raucous new year celebrations that drew hundreds of worshippers to the normally sleepy city this year. (Photo by Manan Vatsyayana/AFP Photo) 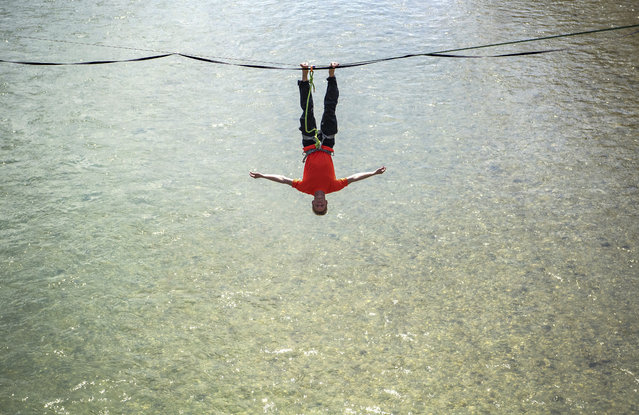 Slakliner Lukas Irmler hangs at a slack line as he performs over the river Isar in Munich on Tuesday, April 16, 2019. (Photo by Sina Schuldt/dpa via AP Photo) 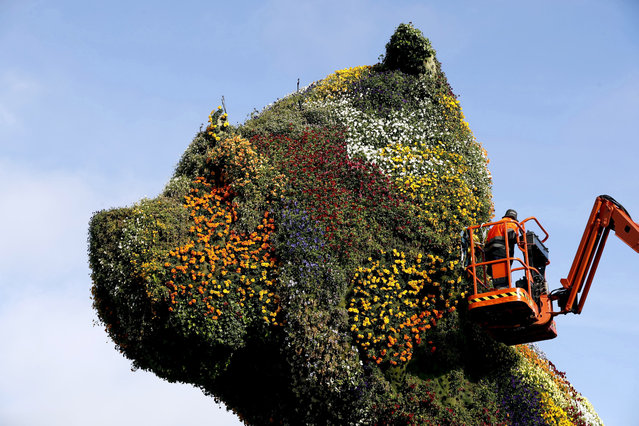