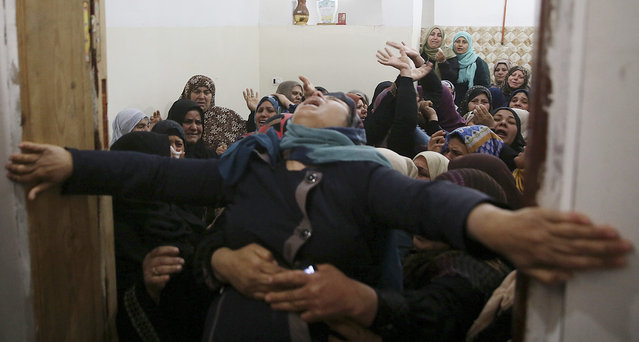 Relatives mourn when they carry the body of Hamdan Abu Amsha, 23, during his funeral at his family house in Beit Hanoun, Gaza Strip, Saturday, March 31, 2018. Israel will target “terror organizations” in Gaza if violence along the territory's border with Israel drags on, the chief military spokesman warned Saturday, a day after thousands of Palestinians staged protests near the border fence. (Photo by Adel Hana/AP Photo) 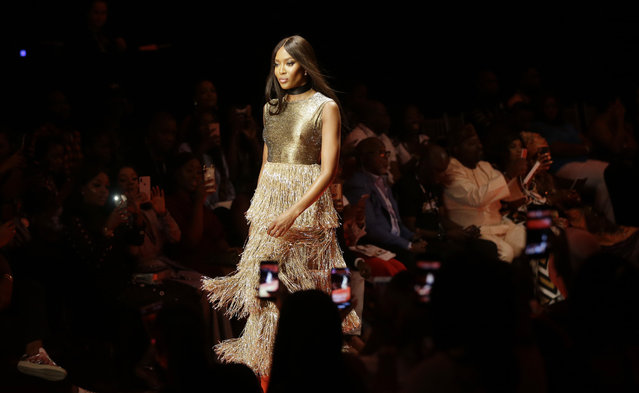 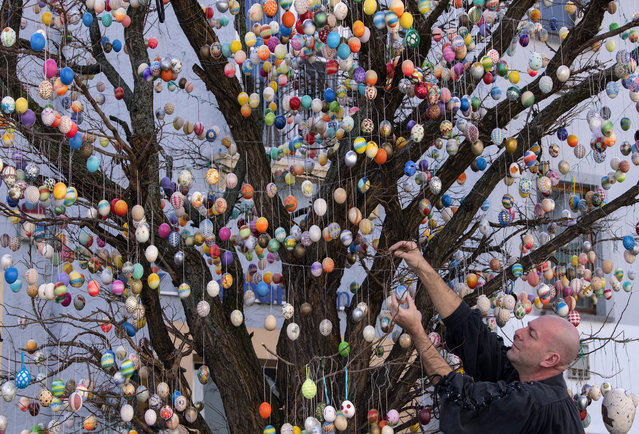 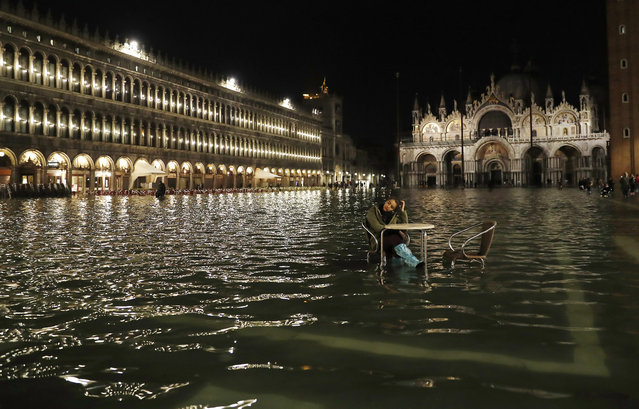 A woman sits in a flooded St. Mark's Square in Venice, Italy, Friday, March 30, 2018. High tides flooded Venice, leading Venetians and tourists to don high boots and use wooden walkways to cross the square and other areas under water. (Photo by Antonio Calanni/AP Photo) 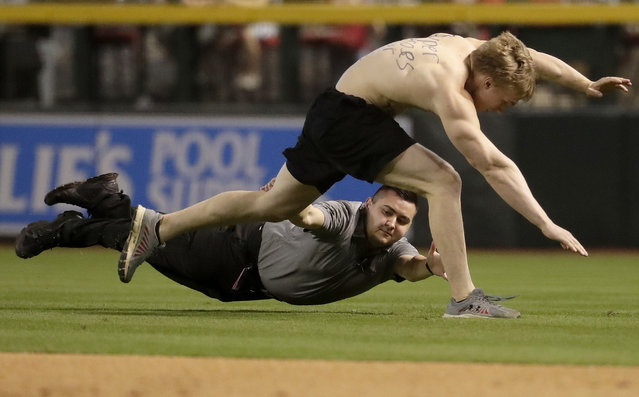 A fan, top, is tackled by security after running onto the field during the third inning of a baseball game between the Colorado Rockies and the Arizona Diamondbacks, Thursday, March 29, 2018, in Phoenix. (Photo by Matt York/AP Photo) 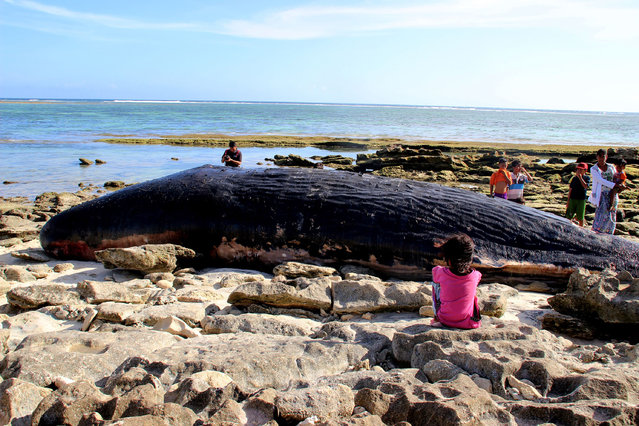 Residents gather to catch a glimpse of a carcass of a nine- meter long sperm whale that washed ashore on Tabuan Beach in East Lombok on March 29, 2018. Lombok Island is a next- door neighbour to the more well known resort island of of Bali. (Photo by AFP Photo/Stringer 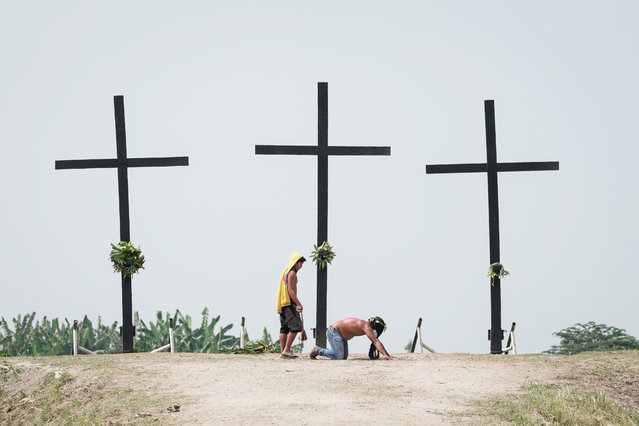 A flagellant is whipped on his back at a crucifixion site on Good Friday in San Pedro village, San Fernando, Pampanga, Philippines, 30 March 2018. Thousands of Catholic devotees witnessed dozens of men who were nailed to wooden crosses or flogged themselves bloody in annual rituals re-enacting the crucifixion of Jesus Christ. (Photo by Mark R. Cristino/EPA/EFE) 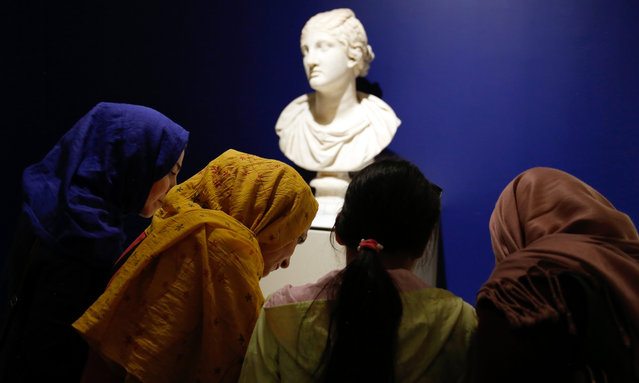 Iranians visit the exhibition “The Louvre in Tehran” at the National Museum in central Tehran, Iran, 23 March 2018. A collection of 50 artworks from the various departments of the Louvre Museum in Paris, France is on show at the National Museum of Iran, the first major exhibition by the Western museum in Tehran. (Photo by Abedin Taherkenareh/EPA/EFE) 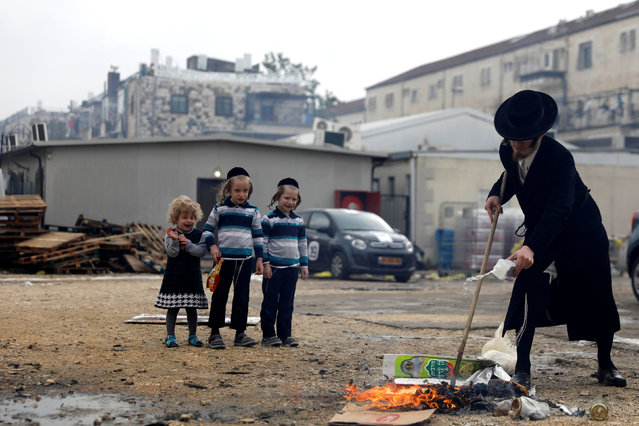 An Ultra-Orthodox Jewish man burns leaven in the Mea Shearim neighbourhood of Jerusalem ahead of the Jewish holiday of Passover, March 30, 2018. (Photo by Ronen Zvulun/Reuters) 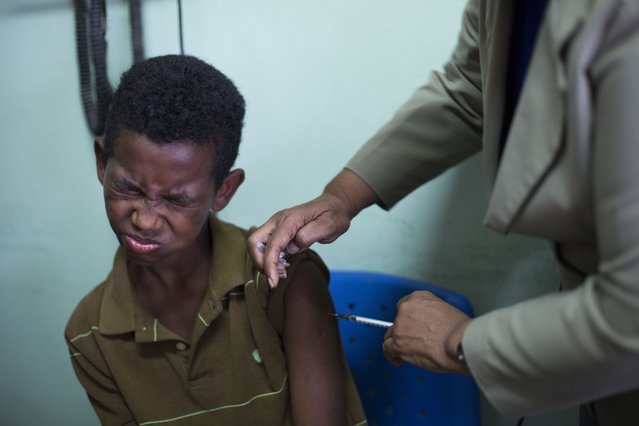 A child receives a vaccine at the Los Alcarrizos Municipal Hospital, in Santo Domingo, Dominican Republic, 28 March 2018. Dominicans crowded the health centers seeking vaccine against diphtheria, after the death of a child from Haiti, thought to be from the disease, which led the authorities to issue an epidemiological alert. (Photo by Orlando Barría/EPA/EFE/Rex Features/Shutterstock) 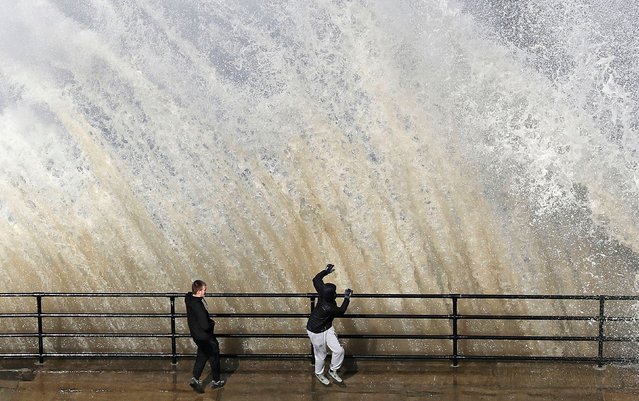 A giant wave crashes near Cullercoats on the northeast coast of Britain on March 29, 2018. (Photo by Owen Humphreys/PA Wire via AP Photo) 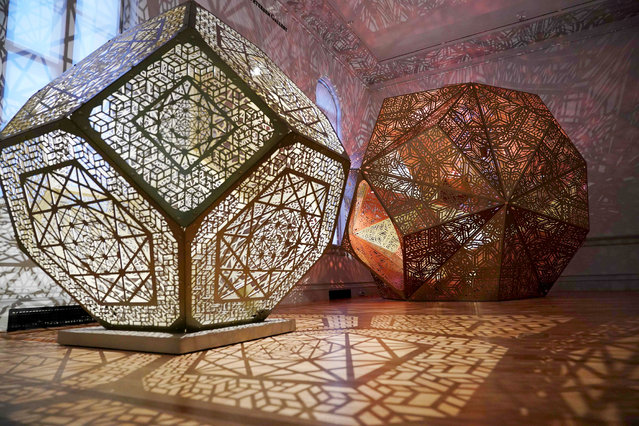 Pieces by Yelena Filipchuk and Serge Beaulieu are seen during a preview of the “No Spectators: The Art of Burning Man” exhibition at the Renwick Gallery in Washington, DC on March 29, 2018. The show brings artwork from the Nevada desert gathering to Washington for the first time. The exhibition runs from March 30, 2018 to January 21, 2019. (Photo by Mandel Ngan/AFP Photo) 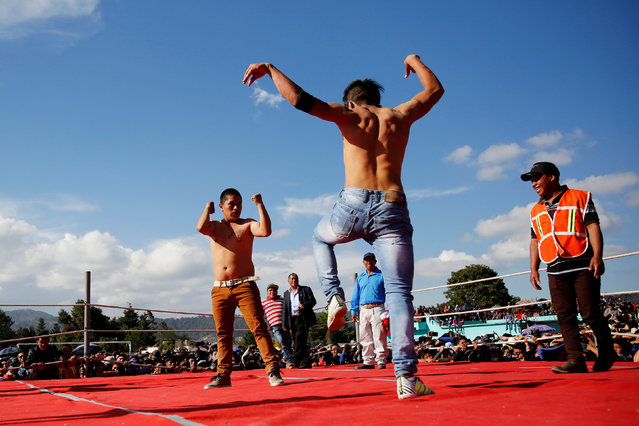 Two men participate in a bare-knuckle fight as part of a local tradition on Good Friday during Holy Week in the town of Chivarreto, on the outskirts of Guatemala City, Guatemala, March 30, 2018. (Photo by Luis Echeverria/Reuters) 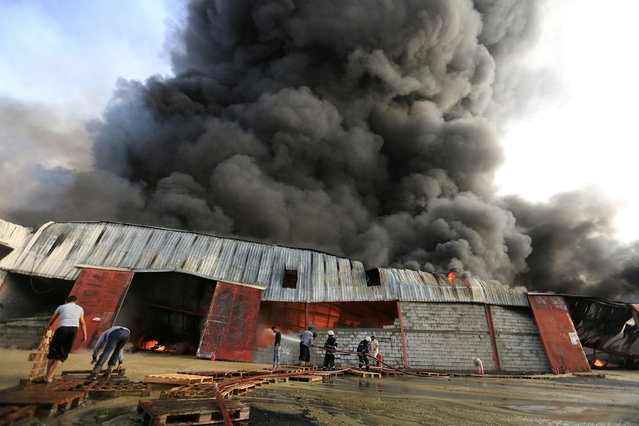 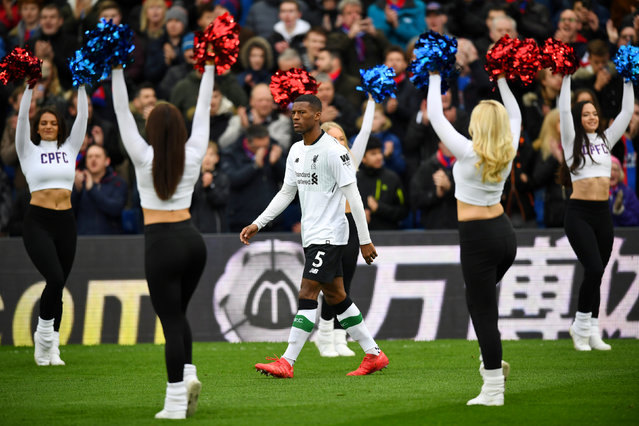 Liverpool's Georginio Wijnaldum walks out before the English Premier League football match between Crystal Palace and Liverpool at Selhurst Park in south London, England on March 31, 2018. (Photo by Dylan Martinez/Reuters) 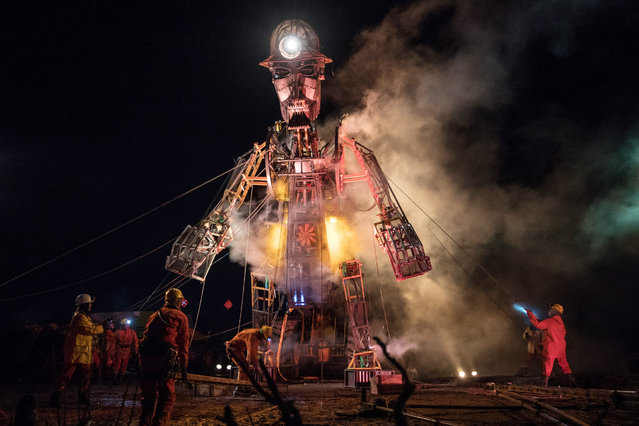 The Man Engine, the largest mechanical puppet ever constructed in the UK, is unveiled during a final dress rehearsal of the “Afterdarker” ceremony ahead of the start of his Resurrection Tour which will kick off on Saturday at Geevor Tin Mine near St Just on March 29, 2018 in Cornwall, England. Last seen in 2016, to mark the 10th anniversary of the Cornwall and West Devon Mining Landscape being added to the UNESCO list of World Heritage Sites, the 11.2 metre tall puppet will start his tour at the Cornish Mining World Heritage Site landscape on Saturday, before travelling to other iconic industrial heritage sites in Cornwall, Devon, Somerset, making various stops in South Wales before heading for Shropshire, Yorkshire and Durham. (Photo by Matt Cardy/Getty Images) 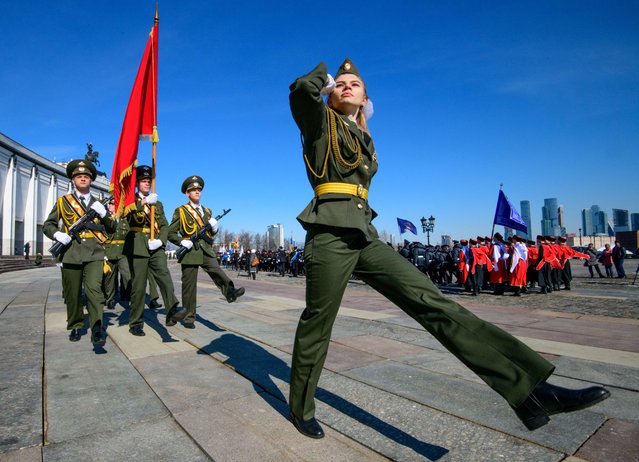 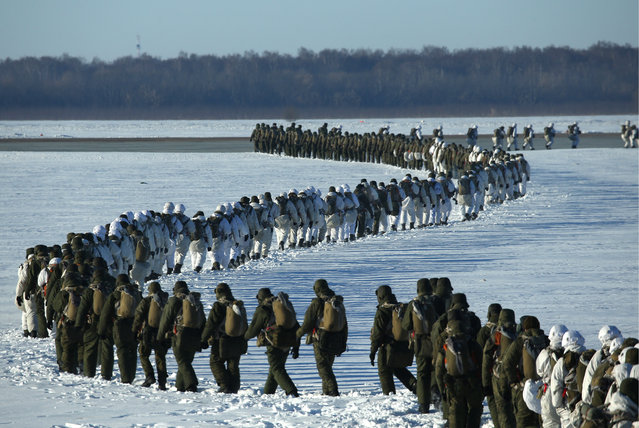 Paratroopers at Dyagilevo airfield, Ryazan Region, Russia on March 29, 2018 during exercises held by the Russian Airborne Troops. 24 items of military hardware and over 1,000 servicemen have been airdropped during the exercises. (Photo by Alexander Ryumin/TASS) 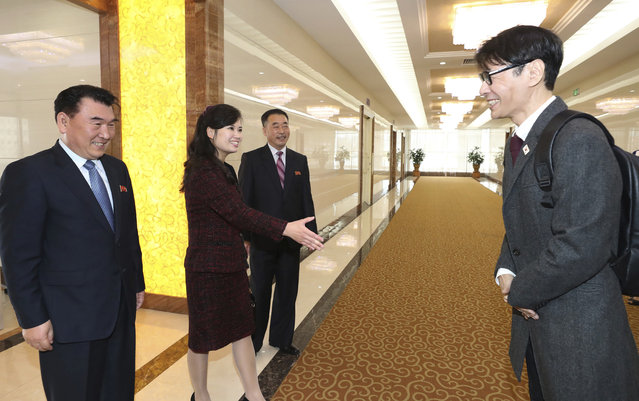 Yun Sang, right, head of South Korean Art Troupe, is greeted by his North Korean counterpart Hyon Song Wol, second from left, at the Pyongyang Airport in Pyongyang, North Korea, Saturday, March 31, 2018. From aging crooners to bubbly K-Pop starlets, some of South Korea's biggest pop stars flew to North Korea on Saturday for rare performances that highlight the sudden thaw in inter-Korean ties after years of tensions over the North's nuclear ambitions. (Photo by Korea Pool via AP Photo) 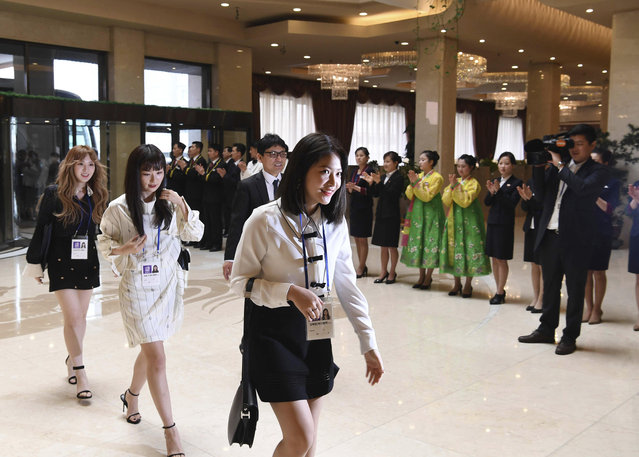 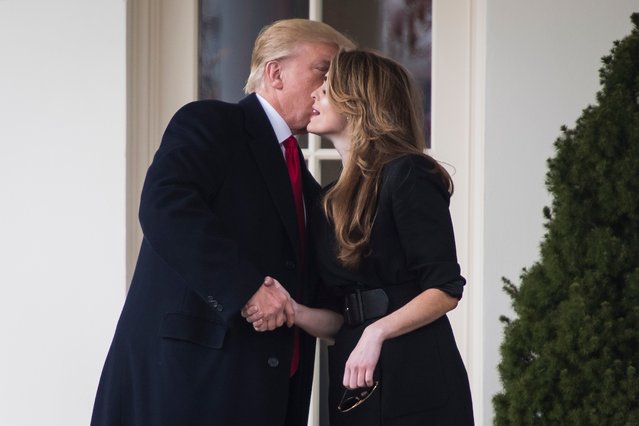 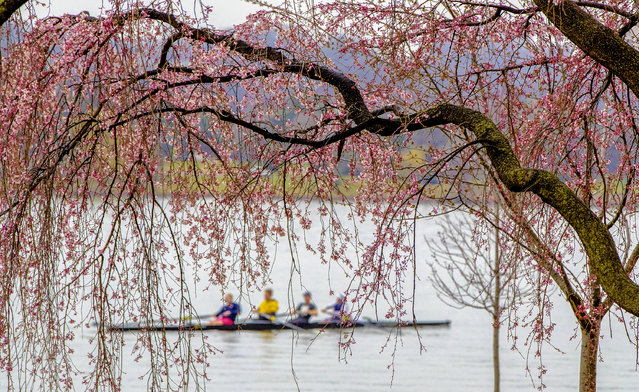