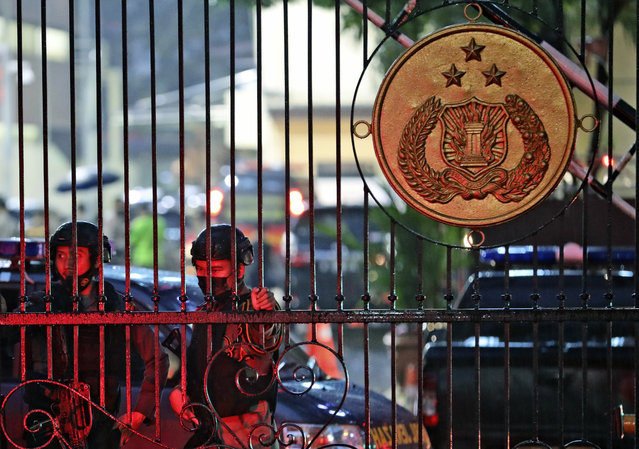 Police officers stand guard at the main gate of the National Police Headquarters following a suspected militant attack in Jakarta, Indonesia, Wednesday, March 31, 2021. A woman entered the Indonesian National Police Headquarters in Jakarta and pointed a gun at several officers before being shot dead by police, in the latest in a series of suspected militant attacks in the world's most populous Muslim nation. (Photo by Dita Alangkara/AP Photo) 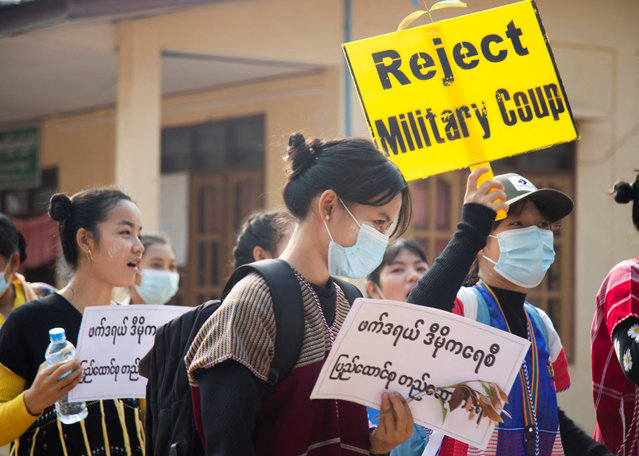 This handout from the Karen Information Center taken and released to AFP on March 31, 2021 shows ethnic Karen people taking part in an anti-military coup demonstration in Hlaingbwe township, in eastern Myanmar's Karen state. (Photo by Handout via AFP Photo) 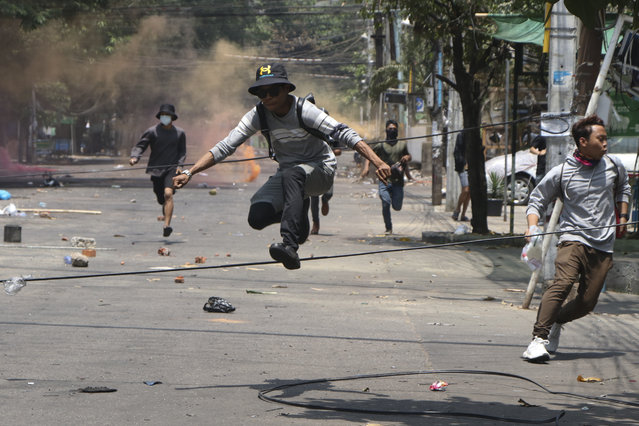 Anti-coup protesters run to avoid military forces during a demonstration in Yangon, Myanmar on Wednesday March 31, 2021. The Southeast Asian nation has been wracked by violence since the military ousted a civilian-led government on February 1 and began to forcibly put down protests. (Photo by AP Photo/Stringer) 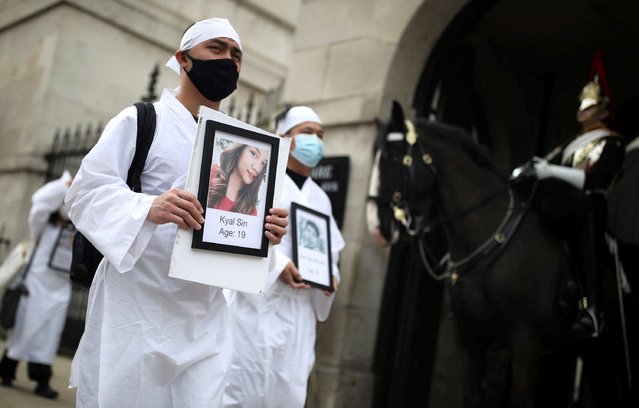 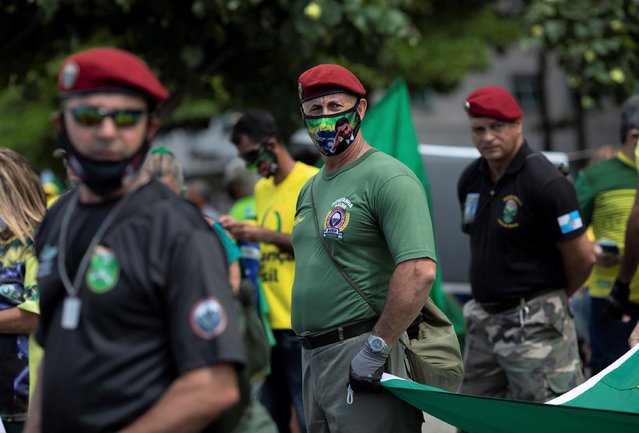 Supporters of Brazilian President Jair Bolsonaro, some dressed as military personnel, take part in a demonstration to show their support for him after leaders of all three branches of the armed forces jointly resigned following Bolsonaro’s replacement of the defense minister, on Copacabana beach in Rio de Janeiro, Brazil, Wednesday, March 31, 2021. (Photo by Silvia Izquierdo/AP Photo) 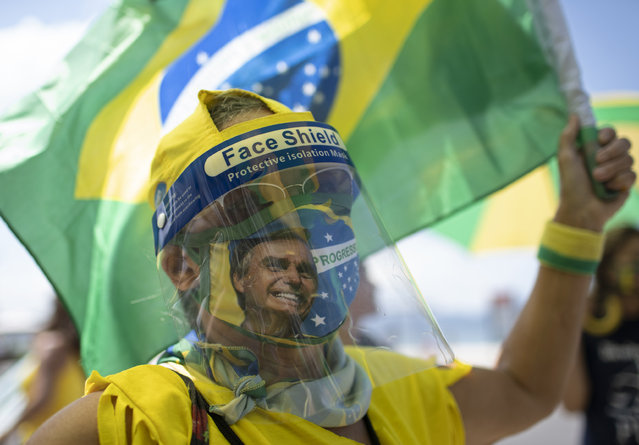 A woman wearing a face shield and mask decorated with an image of Brazilian President Jair Bolsonaro takes part in a demonstration to show support for Bolsonaro, after leaders of all three branches of the armed forces jointly resigned following the president's replacement of the defense minister, on Copacabana beach in Rio de Janeiro, Brazil, Wednesday, March 31, 2021. (Photo by Silvia Izquierdo/AP Photo) 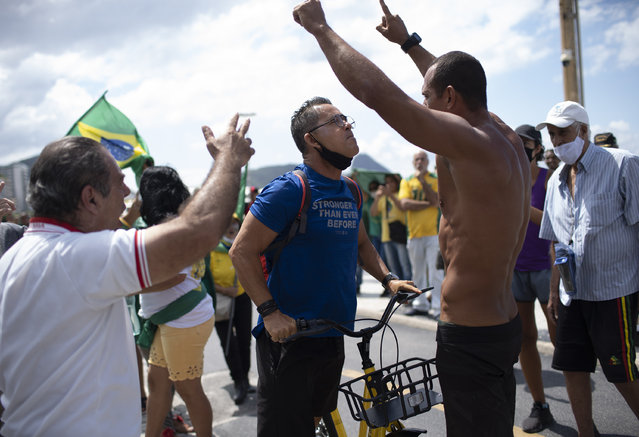 An opponent, center left, confronts supporters of Brazilian President Jair Bolsonaro during a demonstration supporting Bolsonaro after leaders of all three branches of the armed forces jointly resigned following the replacement of the defense minister, on Copacabana beach in Rio de Janeiro, Brazil, Wednesday, March 31, 2021. (Photo by Silvia Izquierdo/AP Photo) 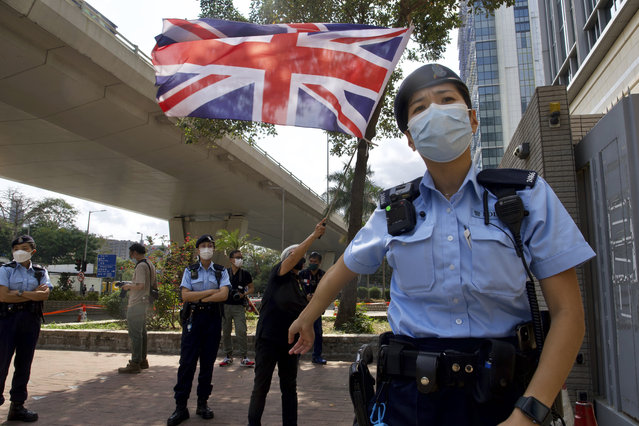 A pro-democracy supporter waves a British flag as police officers stand guard outside a court in Hong Kong Thursday, April 1, 2021. Seven pro-democracy advocates, including media tycoon Jimmy Lai and veteran of the city's democracy movement Martin Lee, are expected to be handed a verdict for organizing and participating in an illegal assembly during massive anti-government protests in 2019 as Hong Kong continues its crackdown on dissent. (Photo by Vincent Yu/AP Photo) 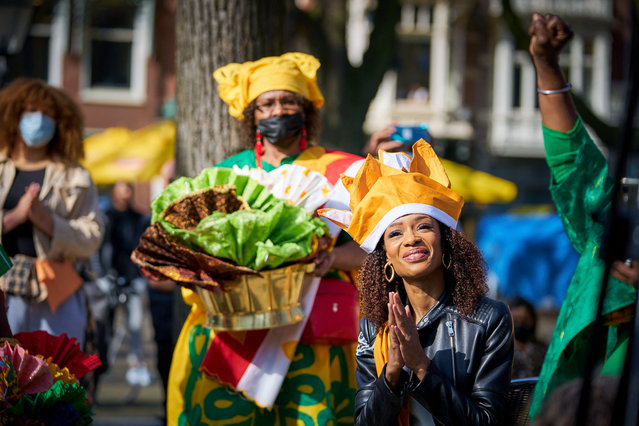 Party leader of BIJ1 Sylvana Simons is greeted by members of the Surinamese community, in The Hague, The Netherlands, on March 31, 2021, the day of the inauguration of the newly-elected Senate. Anti-racism campaigner and former TV presenter Sylvana Simons has won a seat after several attempts, with her Bij1 party. (Photo by Phil Nijhuis/ANP/AFP Photo) 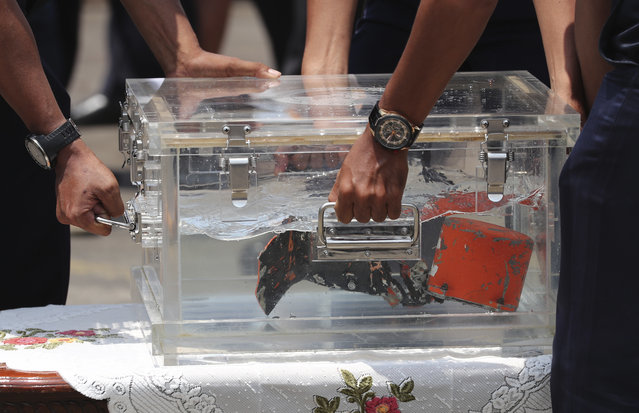 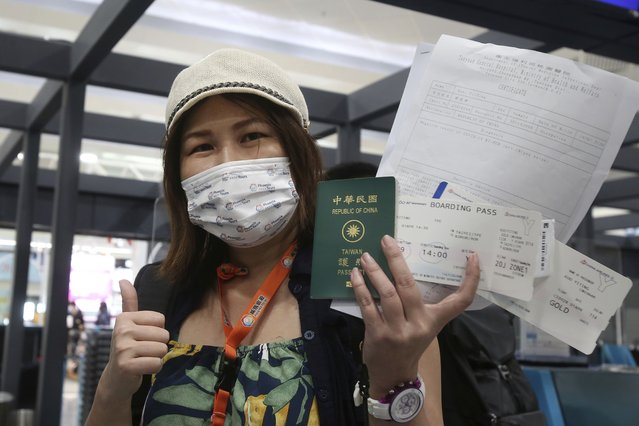 Taiwanese traveler Kuo Yitting of the first group of Palau-Taiwan Travel Corridor shows her boarding pass and a report of virus antigen test before leaving Taiwan, at Taoyuan International Airport in Taoyuan, northern Taiwan, Thursday, April 1, 2021. The Palau-Taiwan Travel Corridor, allowing people to travel between the islands without a COVID-19 quarantine, has started Thursday. (Photo by Chiang Ying-ying/AP Photo) 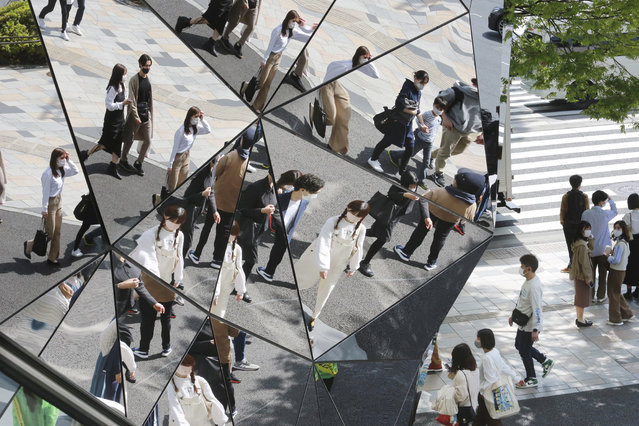 People wearing face masks to protect against the spread of the coronavirus are reflected on mirrors on the wall in Tokyo, Wednesday, March 31, 2021. Japan is set to designate Osaka and two other prefectures for new virus control steps Thursday as infections in those areas rise less than four months before the Tokyo Olympics. (Photo by Koji Sasahara/AP Photo) 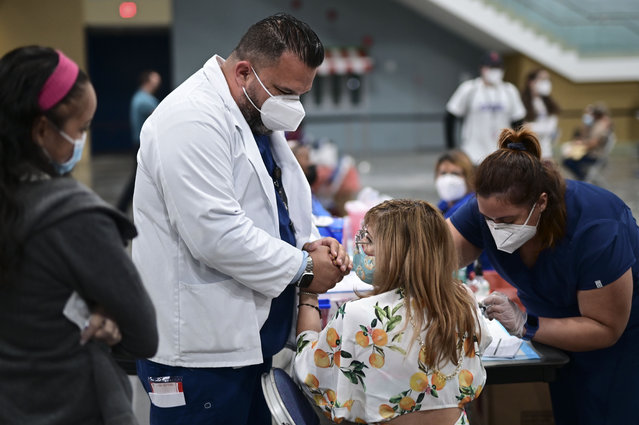 A health worker holds a woman's hands as another inoculates her with a jab of the Johnson and Johnson COVID-19 vaccine during a mass vaccination event carried out by the Department of Health and the Voces nonprofit organization, at the Miramar Convention Center in San Juan, Puerto Rico, Wednesday, March 31, 2021. (Photo by Carlos Giusti/AP Photo) 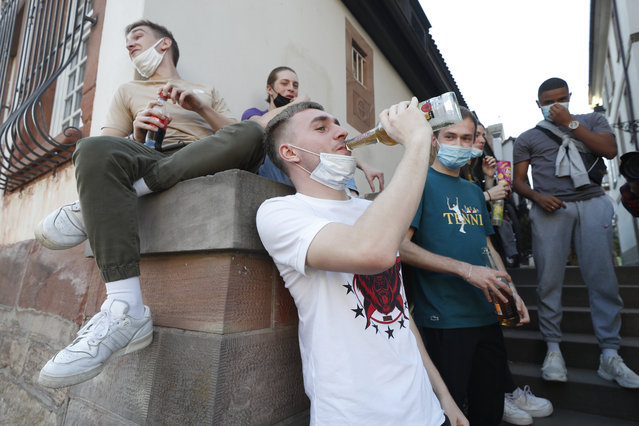 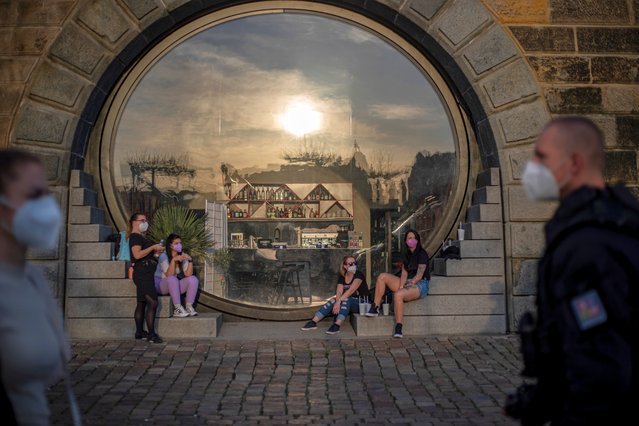 People enjoy a sunny and warm weather sitting on the bank of the Vltava river in Prague, Czech Republic, 31 March 2021. According to Czech Ministry of Health, more than 26.400 people have died in the Czech Republic since the beginning of the epidemic of COVID-19 disease caused by the SARS-CoV-2. In contrast, the daily numbers of newly confirmed positive cases continue to decline. (Photo by Martin Divisek/EPA/EFE) 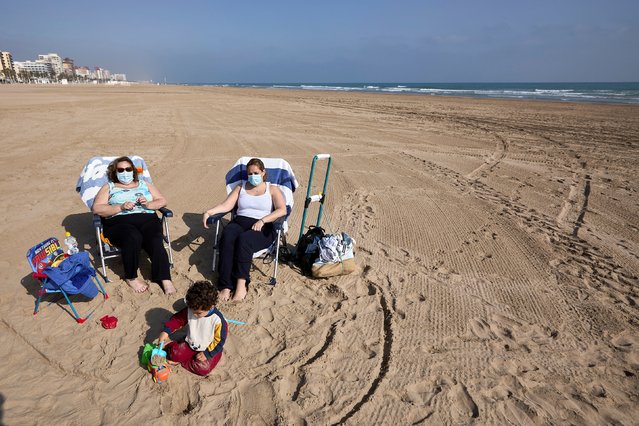 People wear protective masks as they enjoy the sunny weather on the beach of Gandia in Valencia, Spain, 31 March 2021. Face mask is mandatory in all public spaces in the national territory, including beaches, parks or terraces, from 31 March. (Photo by Natxo Frances/EPA/EFE) 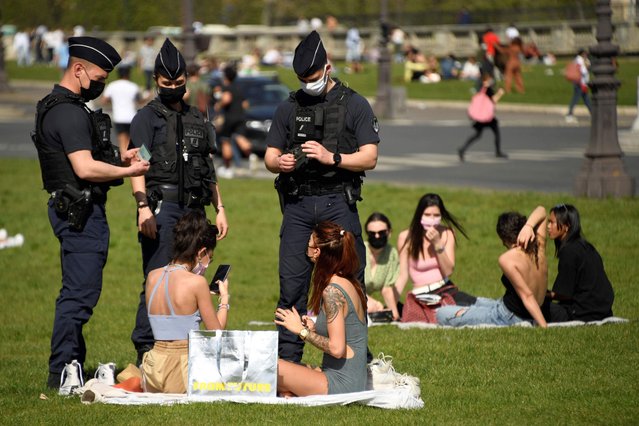 Police officers control people enjoying a sunny spring day on the grassin front of the Hotel des Invalides in Paris, amidst the coronavirus pandemic, on March 31, 2021. (Photo by Bertrand Guay/AFP Photo) 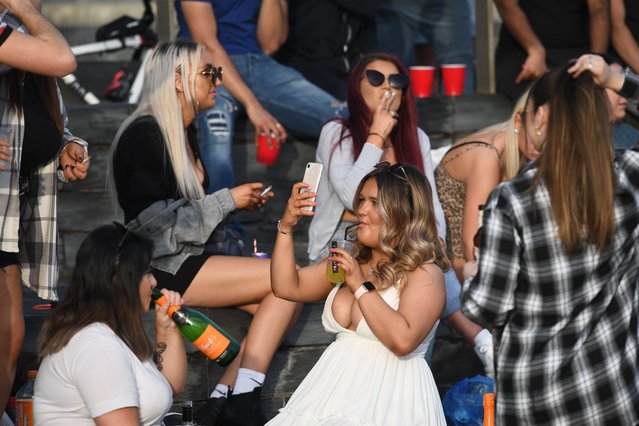 A woman takes a selfie as she enjoys a drink and hot weather at Cardiff Bay, Wales on Wednesday, March 31, 2021. (Photo by Matthew Horwood/South West News Service) 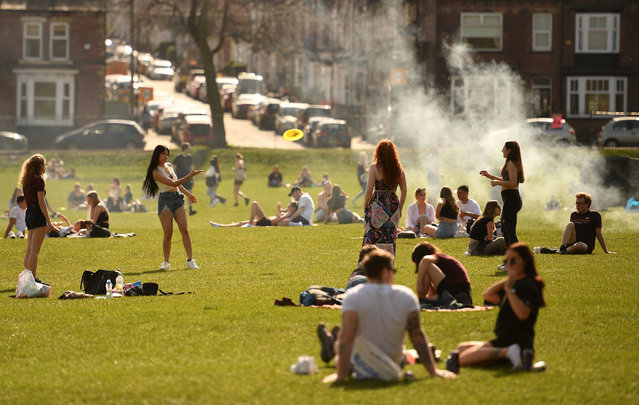 People enjoy the sunshine in Endcliffe Park in Sheffield, northern England, on March 31, 2021 as England's third Covid-19 lockdown restrictions eased on March 29, allowing groups of up to six people to meet outside. (Photo by Oli Scarff/AFP Photo) 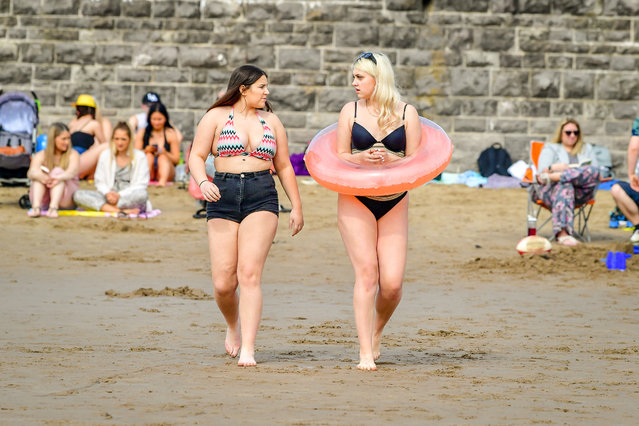 People on the beach at Barry Island, Wales on Wednesday, March 31, 2021. The UK may be about to experience its hottest March on record with temperatures forecast to soar to around 25C (77F). (Photo by Ben Birchall/PA Images via Getty Images) 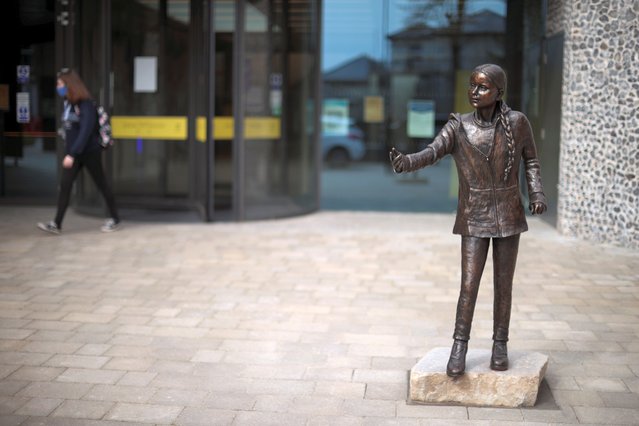 A view of a statue of Swedish climate change activist Greta Thunberg at Winchester University in Winchester, Britain, March 31, 2021. (Photo by Hannah McKay/Reuters) 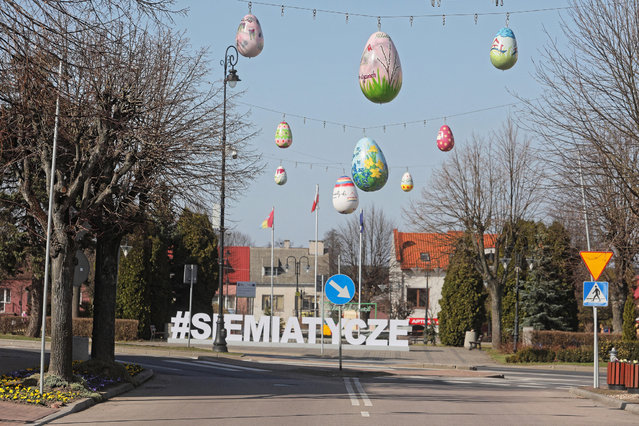 Painted polystyrene eggs decorate the center of Siemiatycze, eastern Poland, 31 March 2021. Easter eggs are common during the season of Eastertide. The oldest tradition create an easter egg is to use dyed and painted chicken eggs. (Photo by Artur Reszko/EPA/EFE) 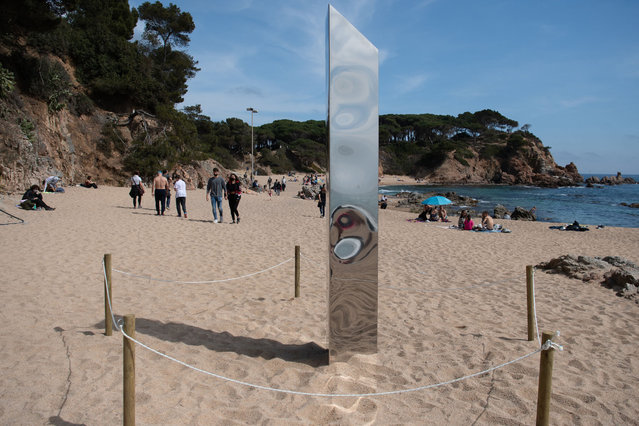 People walk on March 31, 2020 by a metal monolith that has popped up on Sa Conca beach in Castell-Platja D'Aro, near Girona, the latest in a string of similar objects that have recently appeared around the world since a first similar column appeared in a desert of Utah, United States in November 2020. (Photo by Josep Lago/AFP Photo) 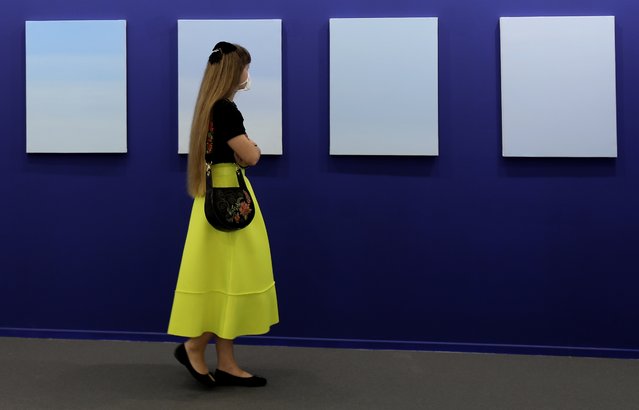 A woman visits oil on canvas paintings by Ayesha Sultana of the Experimenter gallery in 14th edition of Art Dubai at Dubai International Financial Centre, DIFC, which features 50 galleries from 31 countries with a focus on modern and contemporary art, in Dubai, United Arab Emirates, Tuesday, March 30, 2021. (Photo by Kamran Jebreili/AP Photo) 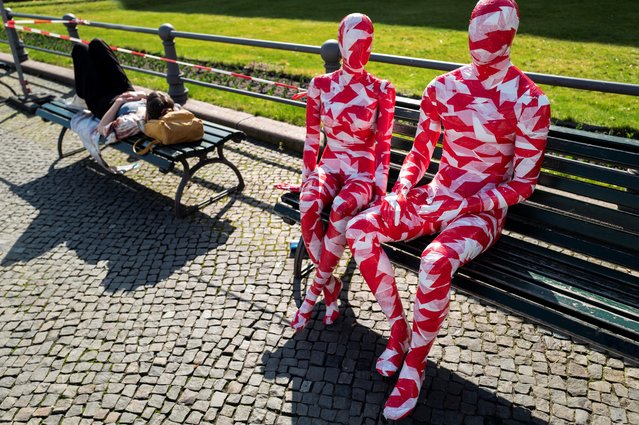 A woman takes a nap on a bench next to mannequins wrapped in barrier tape near Berlin's landmark Brandenburg Gate on March 31, 2021, as part of German artist Dennis Josef Meseg's Corona Memorial called “It is Like it is”. The moving exhibition will be set up near various landmarks in the German capital over the next days. (Photo by John MacDougall/AFP Photo)
Edit Del
01 Apr 2021 09:36:00, post received 0 comments
Publication archive:
←   →
Popular tags:
All tags
Last searches: